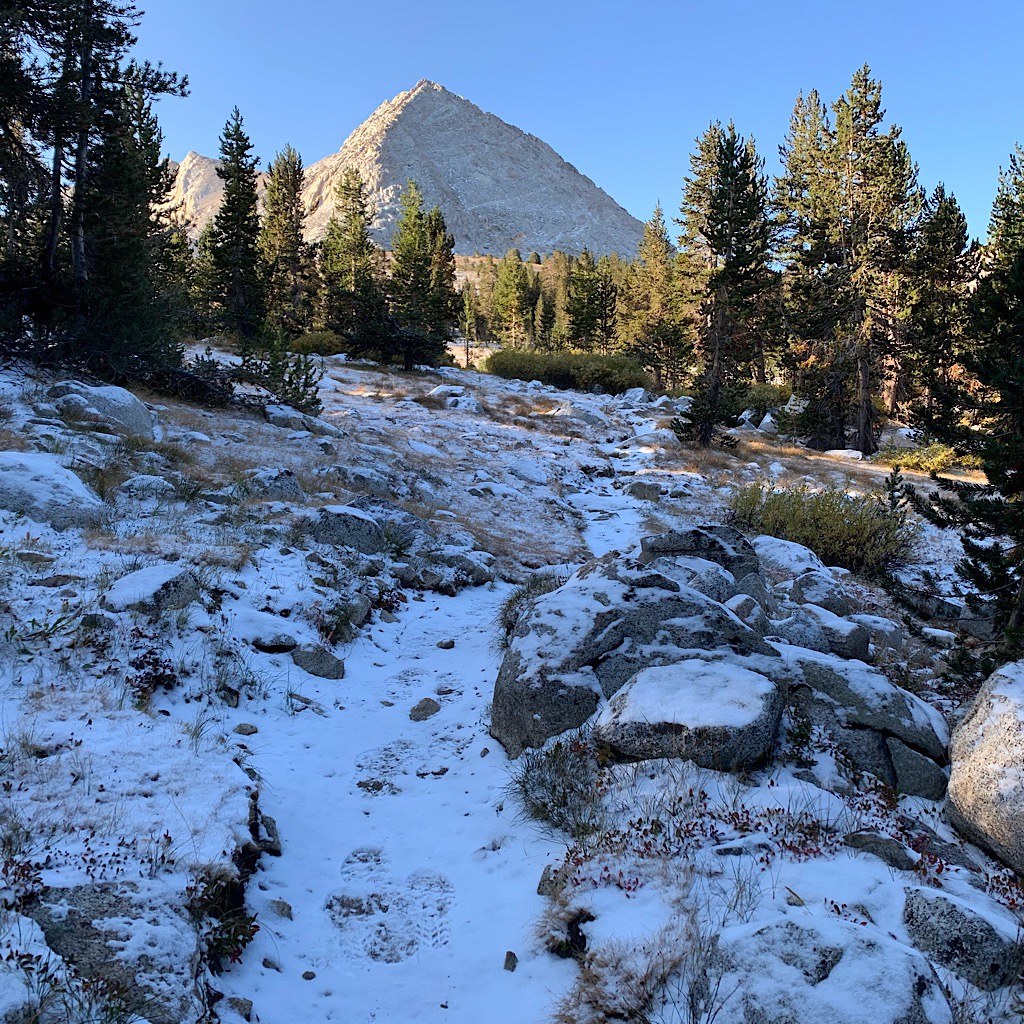 Icy snow hit the alicoop through the night, making a hissing sound. I looked out at night and saw it accumulating, so I pulled my sneakers, with my dusty socks stuffed in, closer under the tarp. At least the wind stopped, and when it begins to get light, I see there is not a cloud in sight. Cold with only a half inch of snow under clear and calm skies is about as perfect as gets. 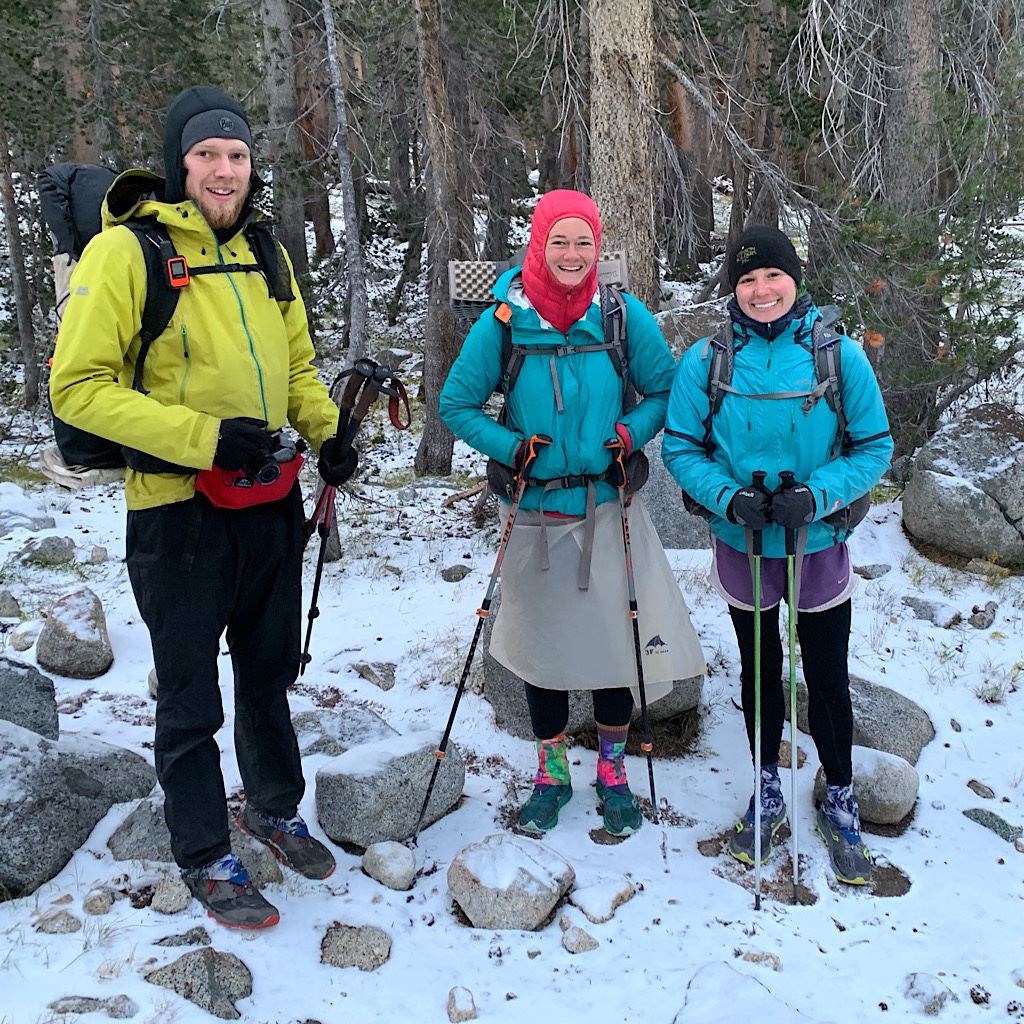 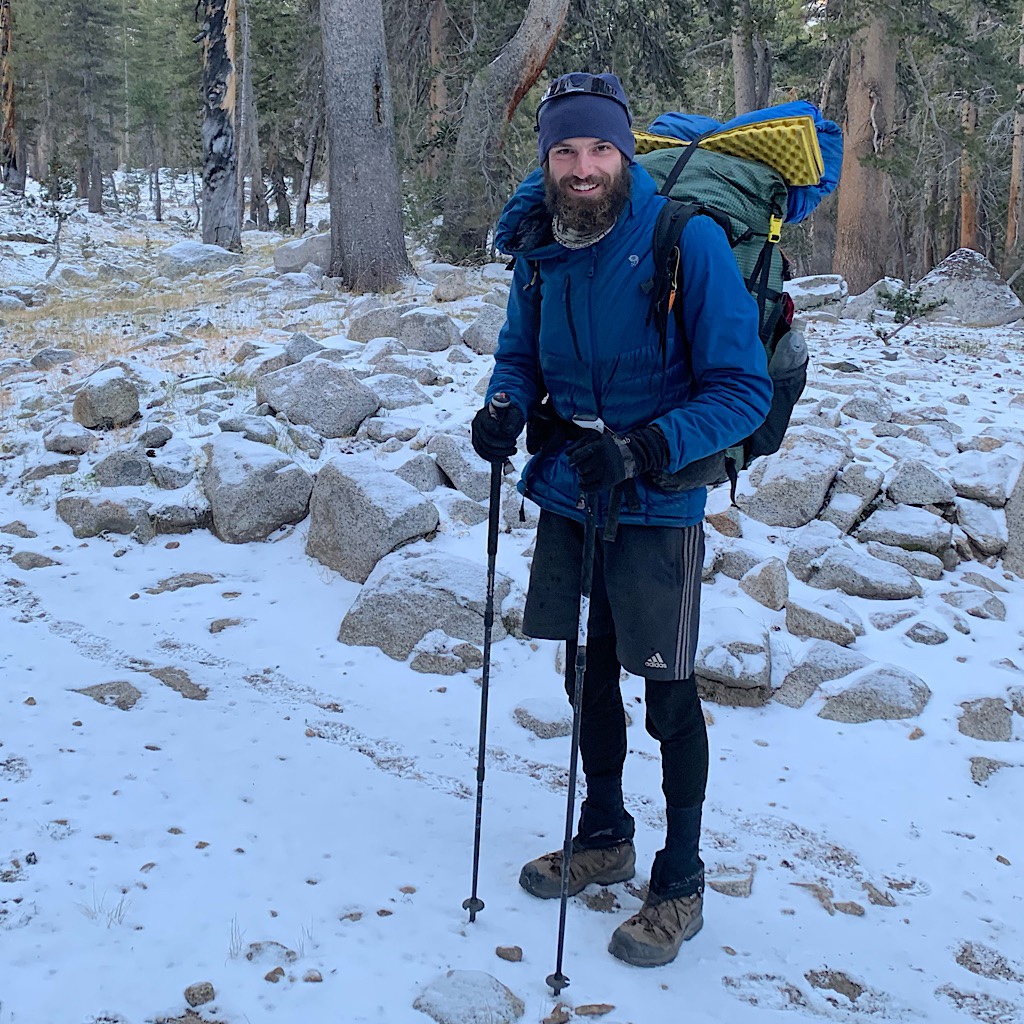 I stayed cozy warm through the night. Thanks for sending me Big Greenie, Richard! And I keep everything on as I make breakfast and pack. The trio leaves very early planning to complete two passes today and leave the Sierra tomorrow. Callum too is up and planning the same. Nate comes by and makes me laugh while I get ready to leave. He too is certain to bag both Pinchot and Glen. I’m not so sure. I’m really feeling the altitude with my extra food weight and the lakes below Glen are stunning. My plan is to get over the pass in front of me without slipping in the snow and find a safe camp spot with a spectacular view.

The snow is not particularly slippery. It’s sticky snowball-making snow and I easily follow footsteps going up through the forest towards a beautiful open area of meadows and streams. It’s not difficult to cross the streams on rocks with their dusting of snow, none-the-less, I will myself not to fall into the icy water. Wet shoes snd socks will likely not dry and might even freeze – scratch that, they will freeze.

It’s so lovely in this hanging valley surrounded by mountains as lakes appear stepping up towards the pass. I come to the one I camped at with rock that looks like sliced bread. I am so glad the trio convinced me to stay below, though, since this one is completely exposed to the elements up here, even if beautiful. 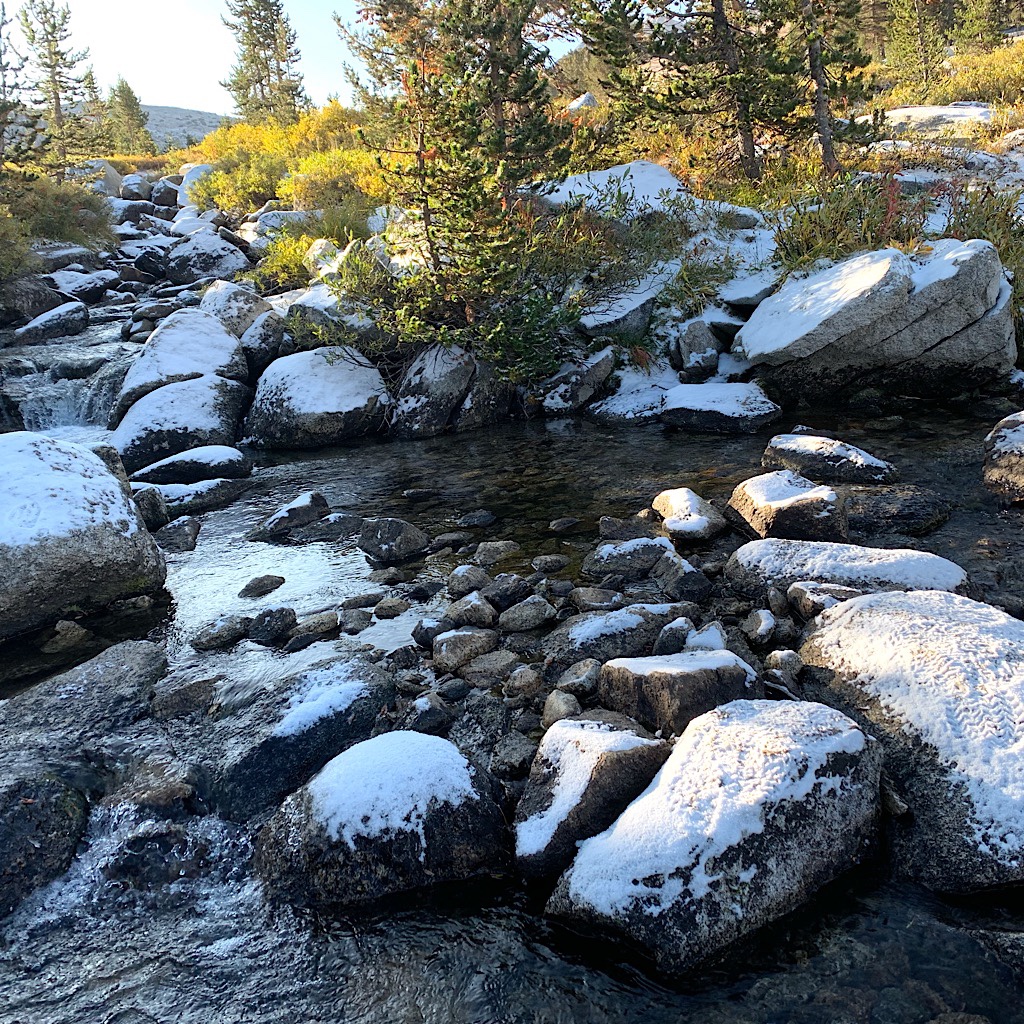 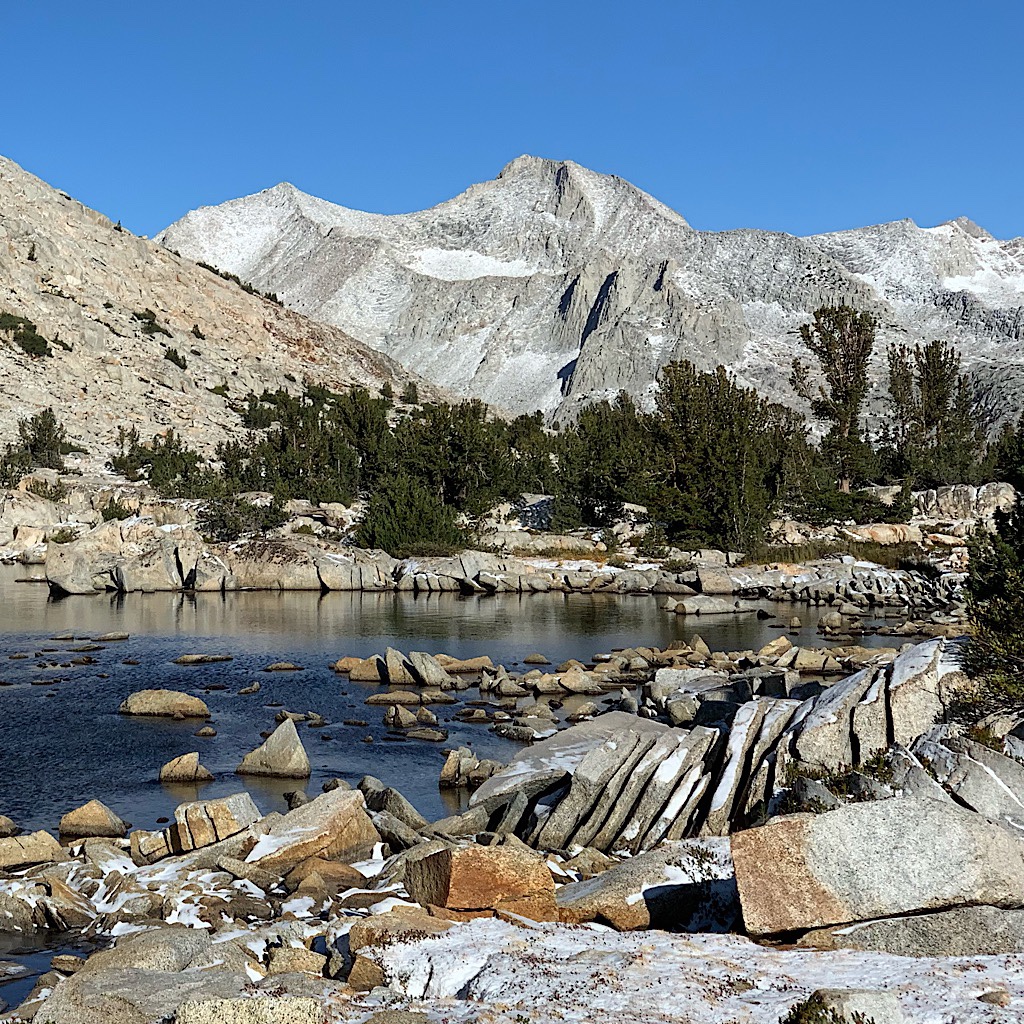 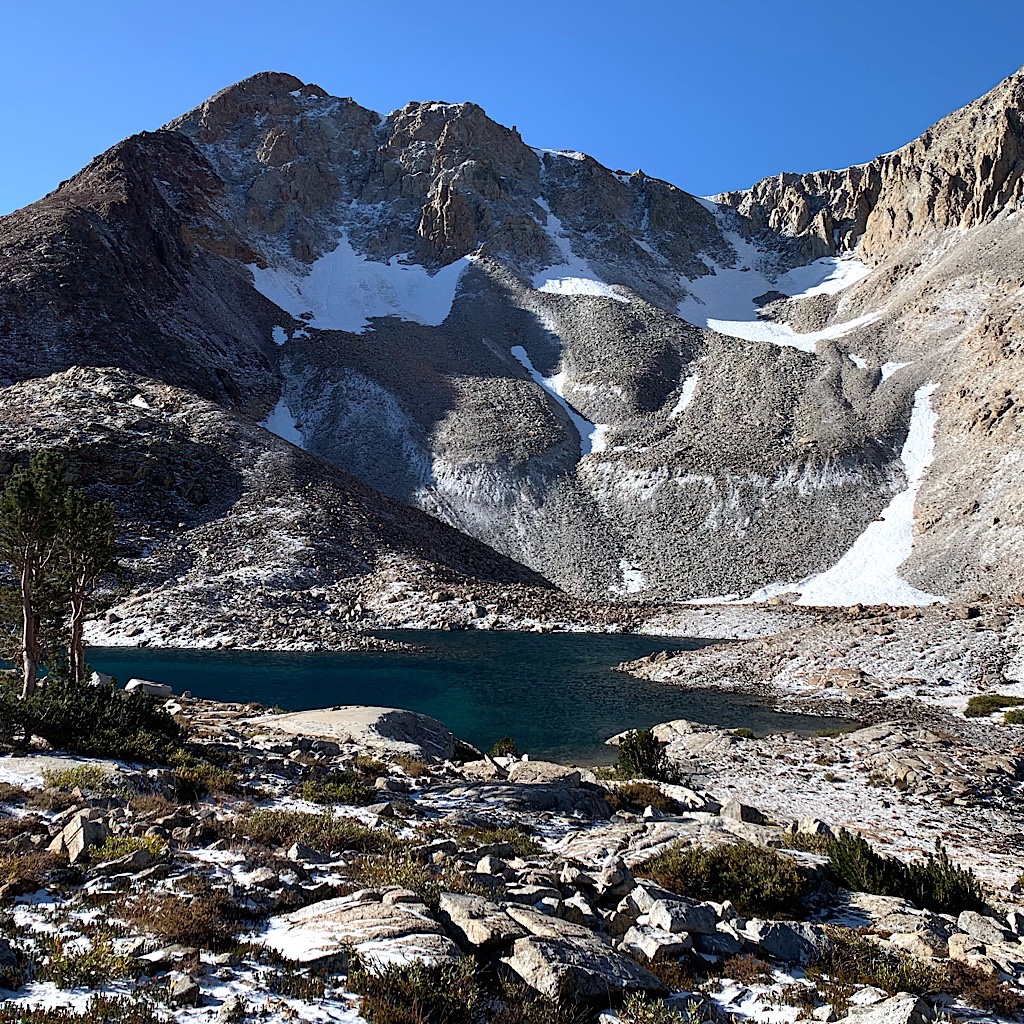 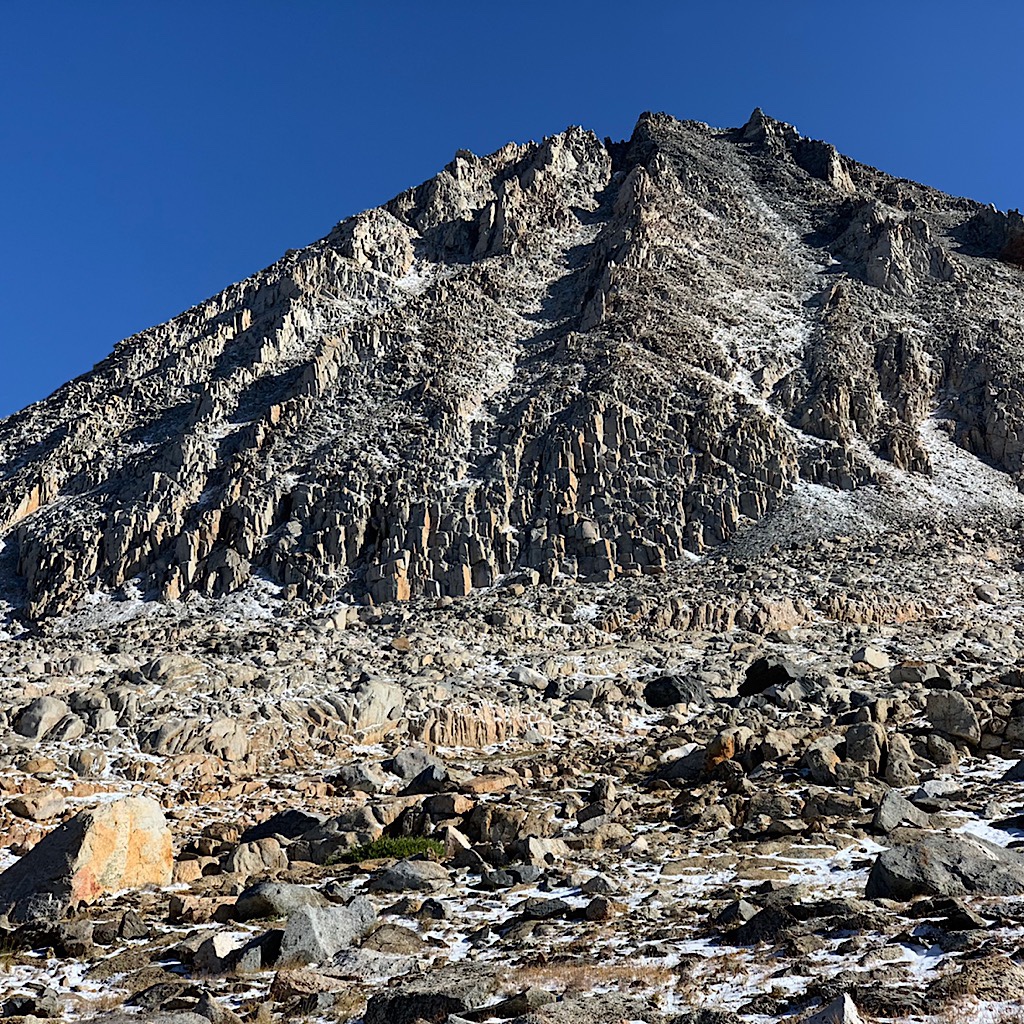 I can see the pass above a jumble of rock. I climb up rock stairs built for giants as more lakes come into view and peaks like a monster’s incisors frown down on me, snow stuck between his teeth. The sun is warm now but the wind kicks up and my nose is running. I really feel the altitude, breathing heavily and rhythmically and moving slower than normal. But I go the whole way, switchback after switchback until I’m at the top, the huge bowl of a valley I leave behind is off-white and almost indistinct, blue lakes like tiny droplets of water.

My view is magnificent of a series of shimmering lakes laid out far below on a rock background. I’m alone and begin the descent on huge hand-built switchbacks against the cliff when someone calls my name. Nate is at the top, so I head back up to ask if he’ll snap my picture and mine his sitting on a rock that appears placed there just for this activity. In my last portrait, I’m in shorts and a T-shirt. Now, it’s snow covered below and I’m bundled up.

Nate waits for John and Rob, my friend from Muir Ranch who’s joined them, as I head down, certain he’ll cross the next pass. I feel good but the wind picks up so I put on my jacket, warm mittens and cover my face with a buff. Soon, two hikers come down also covered up and I realize it’s Amy and Erin. They recognize me by my hat – which is becoming quite famous in its own right. We walk together for about an hour talking about how happy we are to have made it here and also that the weather is so grand. Apparently, many hikers left the Sierra because of the weather. The risk is that this may be the best it gets before winter sets in. Yesterday was a bit dramatic and now the cold is here, but it’s a front that should keep the storms away and the skies blue at least for a few more days, and about five is all I’ll need. 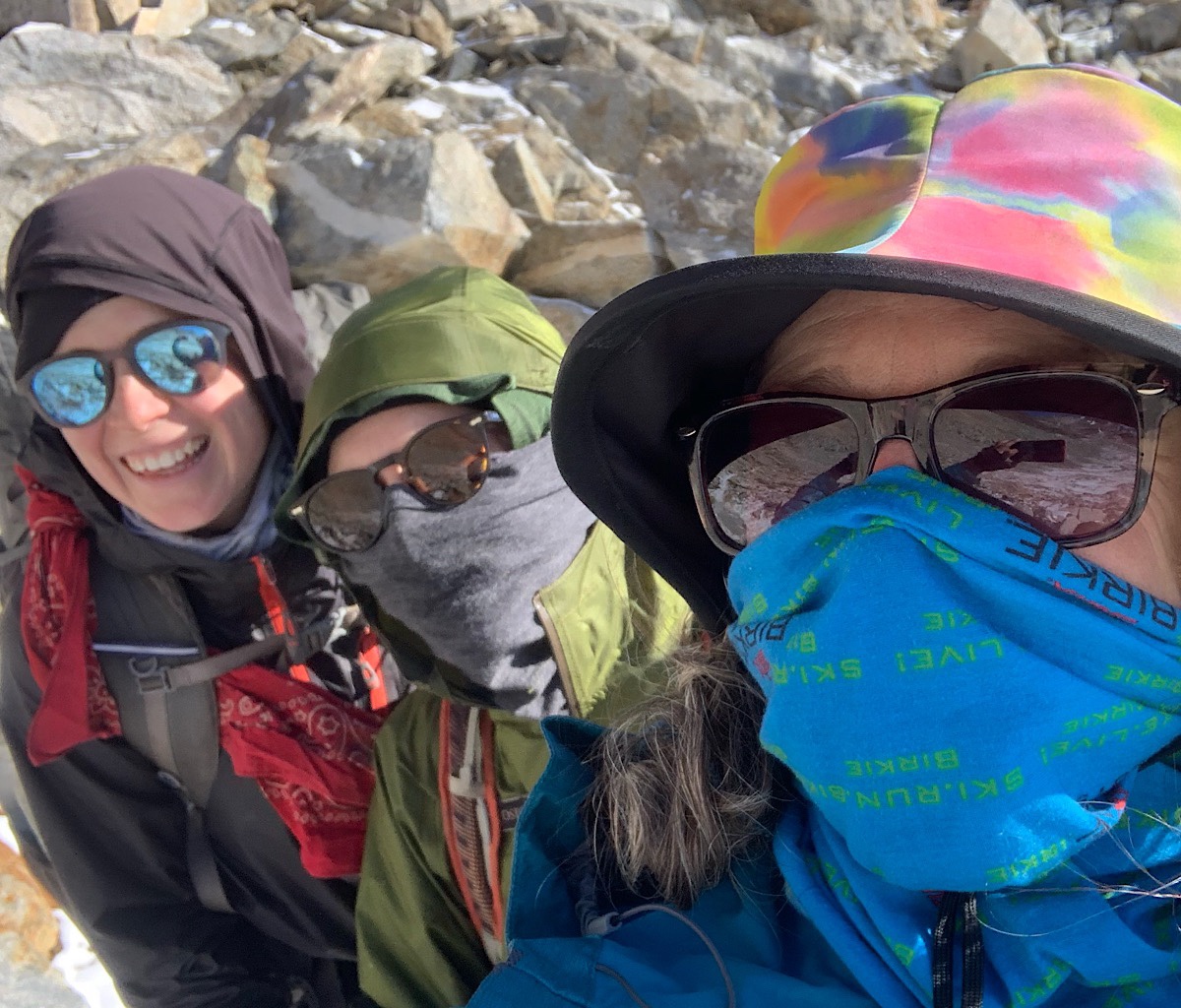 They find a warm rock for an early lunch and I keep moving down and down into the canyon created by Woods Creek, the huge cliffs’ myriad waterfalls sparkling in the sunlight. I take lunch at some rapid moving water over big stones that wear a thin ice layer. My water bottles are also filled with ice shards. I take off some of my clothes in the sunshine, but wonder how soon I’ll put them right back again.

Which turns out to be very soon as the wind whistles up the canyon, the chill a sort of motivator to enjoy the Sierra but not linger too long. One of the problems when walking the PCT southbound is getting here in time. The rule of thumb is to arrive at Kennedy Meadows by the second week of October. That’s usually when the Sierra gets its first real snow, one that might trap a hiker. But before that ‘real snow’ it’s unsettled weather that can be challenging to someone who has gotten used to hiking light and fast. Of course we should be prepared for any weather, but everything has to be carried and we need to move nimbly during this changeable time, so it’s always a compromise.

It does seem that after yesterday’s squalls I will have a kind of Indian Summer with beautiful sunny days and crispy cold nights. That’s certainly a recipe for glorious colors which I am seeing now, the reds and yellows ablaze setting the canyon glowing. Surprisingly, I still see wildflowers – and many not drying up. This truly is an exquisite place everywhere I look. The water rushing below me as well as the waterfalls that feed streams crossing the trail are some of the clearest I have ever seen, like glass to the rocky and sandy bottom, fish darting under a rock as I pass. A huge rock pile bulldozed here by a glacier gives way to a granite ramp where my lunch spot water eventually arrives, skittering and sliding into a gleaming turquoise pool carved in a polished U-shape.

Like New Zealand, I cross a suspension bridge to begin my ascent up a fork of this river. A gal in fancy knickerbockers waits her turn since it’s one hiker at a time. Her name is ‘Squish’ and she tells me she looked for food in the bear lockers at a campsite and found only garbage. I can’t imagine not carrying out what I brought in. I tell her she has awesome pants and take her picture before heading up towards the pass and beautiful lakes.

It’s not easy for me heading back up. I think it must be the altitude – or my advancing age. Maybe it’s my decision to carry all my food which needs to last another 95 miles. I breath heavily and move methodically. It’s definitely lovely here as the huge range of mountains I just visited grows behind me. But, I need to stop and take a rest. I scrounge around for something to suck on left in the hiker box but soon Amy and Erin arrive. They give me some of their extra food as well as a caffeinated Clif block to help my system. My lungs hurt a little, I actually think it’s the muscle from so much breathing. Along come three JMT hikers, but not our friends. Erin points out that I may be ‘slow,’ but I keep advancing along and Nate and company are likely not going over another pass this late since they’re behind. These other hikers stop and chat, offering me a nearly full pack of Clif blocks that are bound to make me feel better soon. It turns out all three are doctors and tell me to let them know if my symptoms get worse. Nice guys! I don’t have a headache or nausea, just kind of panting. So I eat my blocks and walk slowly.

Even slow walkers get where they’re going. The doctors point out a couple of buck on a cliff, then I come to a stream surrounded by pristine meadow and the huge phallic fin that defines this stunning valley. The light is perfect at the end of day turning things gold. I pass Dollar Lake then come to the one I camped at, Arrowhead Lake, pristine and shimmering. The doctors are here looking at their map and little Miss Sickly helps them out, telling them where they are and how far it is to the Rae Lakes where they are headed.

I head up there too as the sun turns the mountain range pink and yellow. I slip down a little side trail and find a private site looking right at those mountains, a tiny stream bubbles next to me. It’s only 6:00 and starting to get bitterly cold, so I make dinner quickly beginning with an appetizer of the noodles Erin gave me. 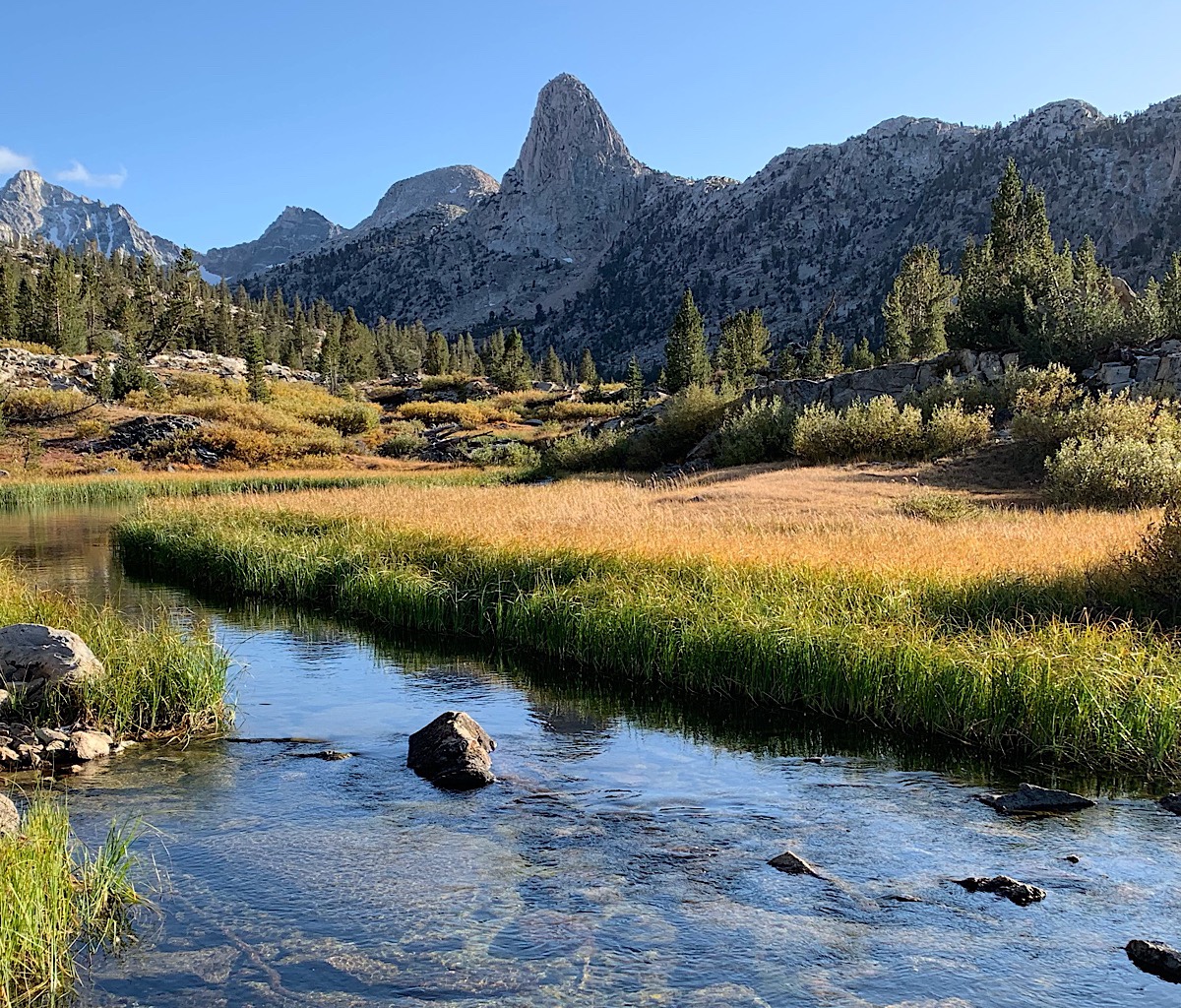 The pink disappears and the peaks shimmer as they reflect in the lake. I am wearing all my clothes, closed into Big Greenie anticipating a quiet but chilly night. The pass awaits my feet tomorrow and more beautiful surprises too.