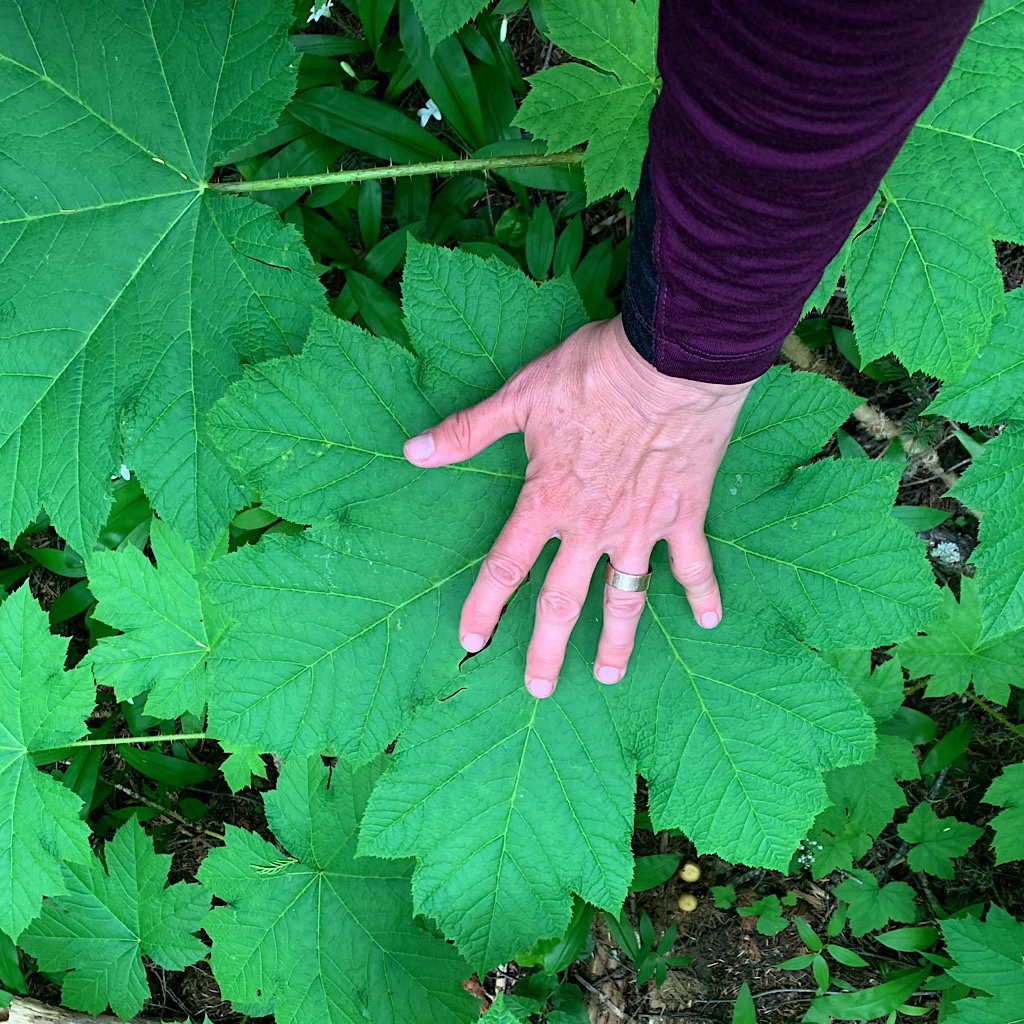 I sleep reasonably well even if I have to cram my earplugs in to drown out the snoring. Randy wakes me up early to suggest we do laundry. It’s a decently long walk from her, along the lake, but there’s a phone and I’m able to call Richard directly.

Randy and I have breakfast and talk more about work, careers, vocations, callings and the meaning of life. Laura and Myra swing by, raring to go on the early bus and we decide – very last minute – to do the same.

The big red bus chugs up as we come flying out barely packed, clean clothes jammed into stuff bags and ice axe hardly strapped on. I’m told I won’t need it, but will have to carry it anyway over this next week. At least it makes me look bad ass. 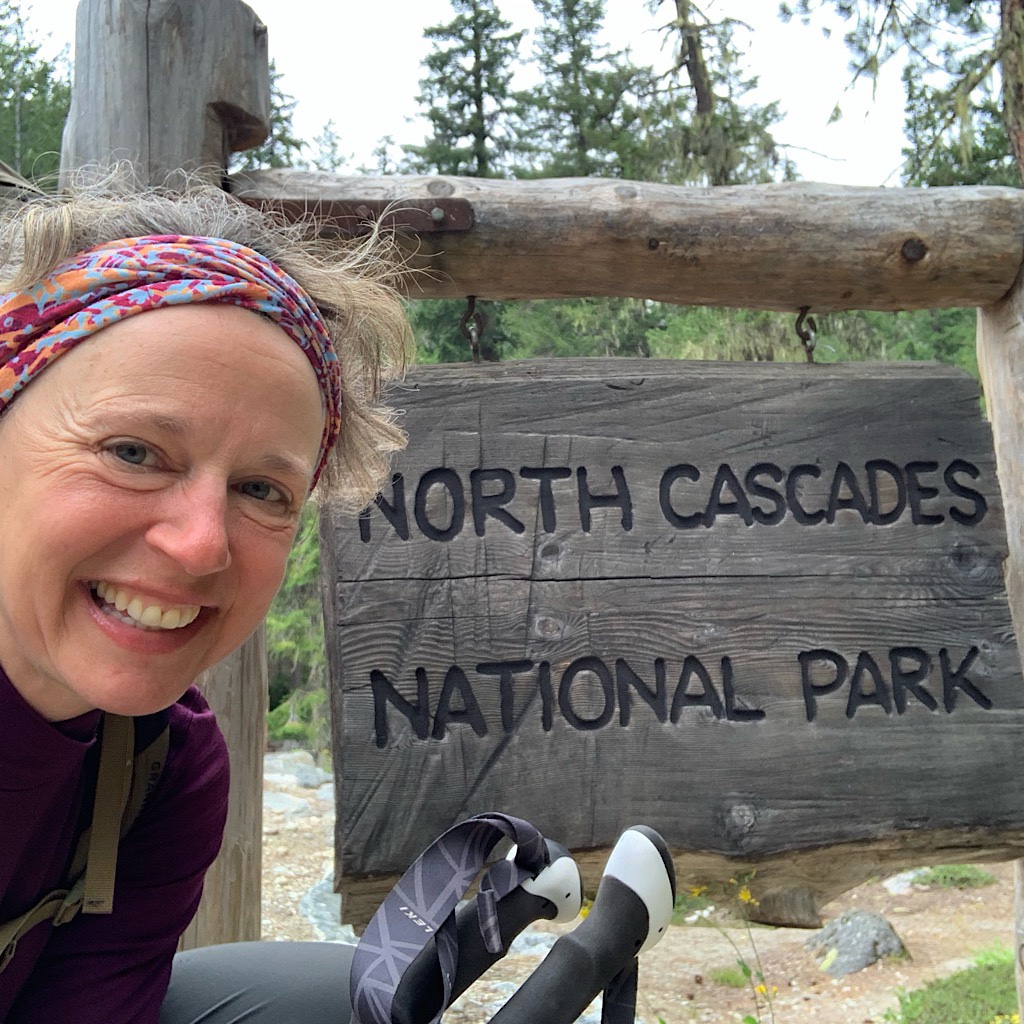 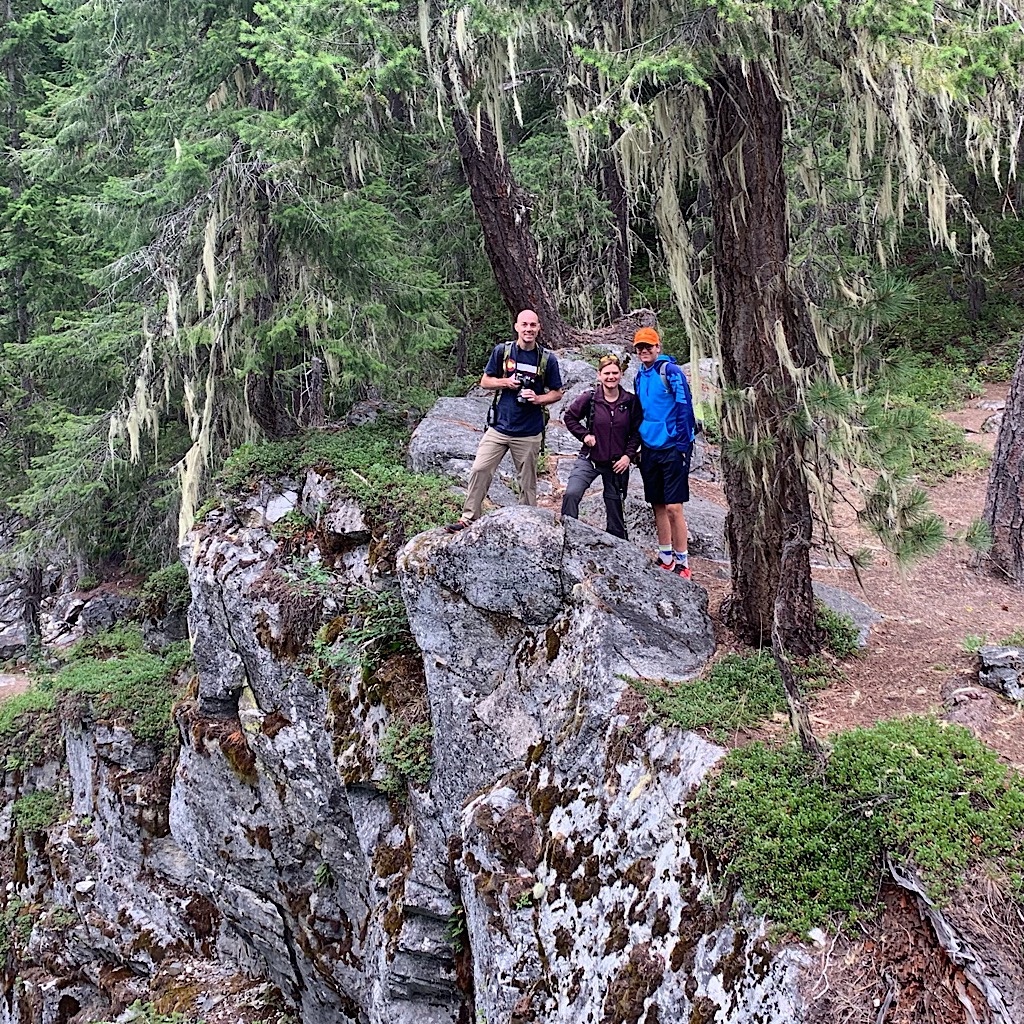 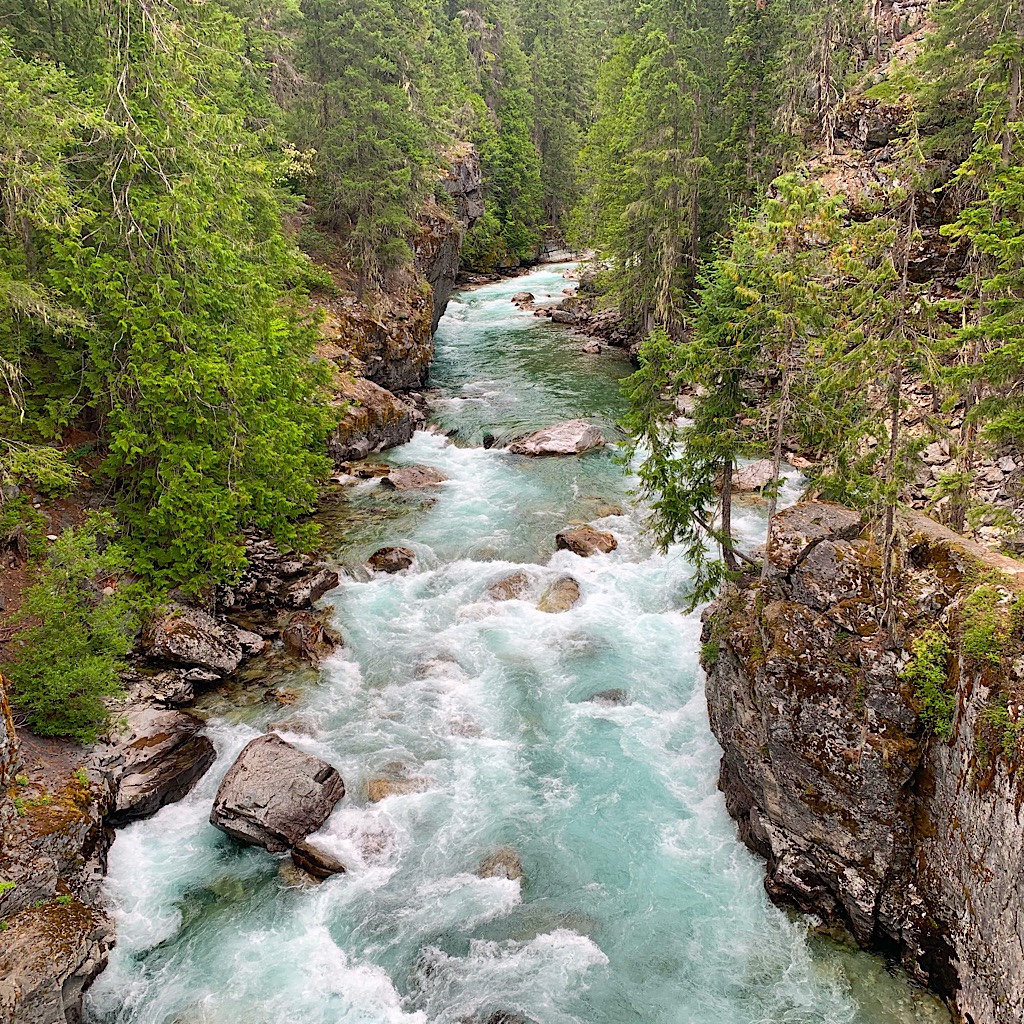 At the ranger station, we pack up and set off crossing the deep gorge made by Agnes Creek, clear light turquoise. It’s a cathedral of trees – hemlock, silver fir, ponderosa pine, Douglas fir. The scent overwhelms. The quiet restores. Spanish Moss hangs over every branch, glacier covered spires towering through the branches. For the first mile, I gorge on huckleberries, plump and ripe fearing the Bear Mafia will take me out for invading their food supply. A deer stops to consider me with soft, lashed eyes. A wood pecker ratatats. A hummingbird hovers right at my face, maybe attracted to my lip stick?

A hiker named Toast flies past, keeping to a ‘schedule.’ I stop to talk to a trail crew, one with an enormously long shovel-handle sticking up out of his backpack.

I come to lovely rapids with a rocky beach and get drinking water and soak my feet – ice cream headache cold. I lean back on Olive Oyl and eat Sea Squishies as Agnes Creek crashes down. This spot is a bend where the water rests a bit, away from the rapids. Mosquitos are out, but they move slowly and are easily smashed. 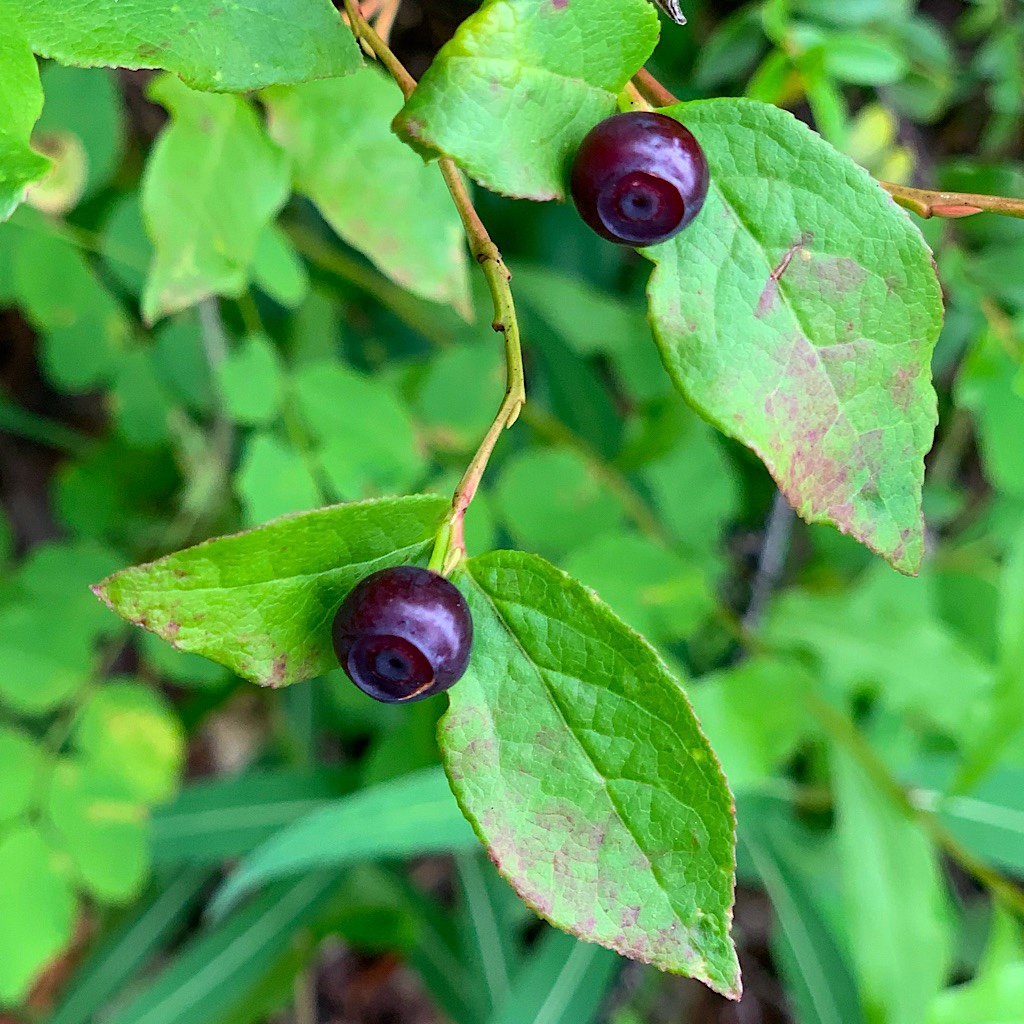 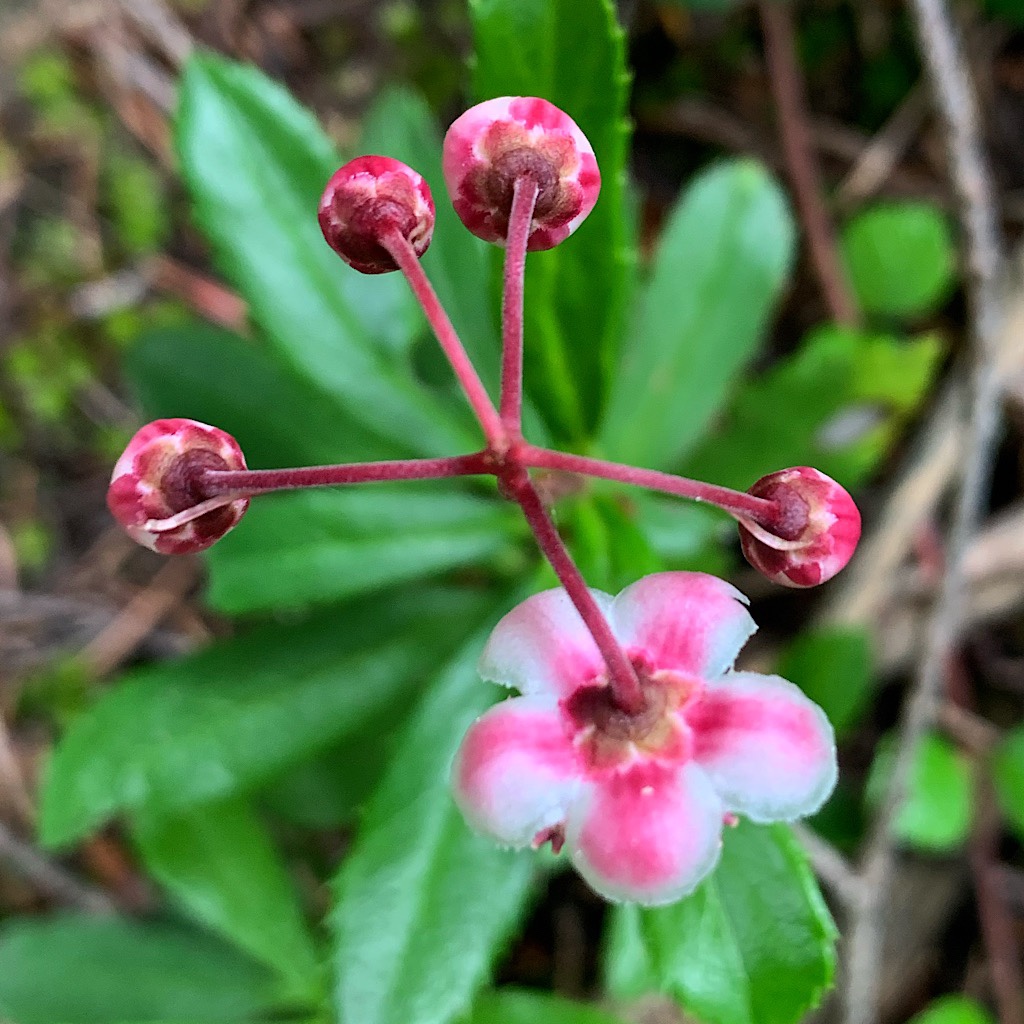 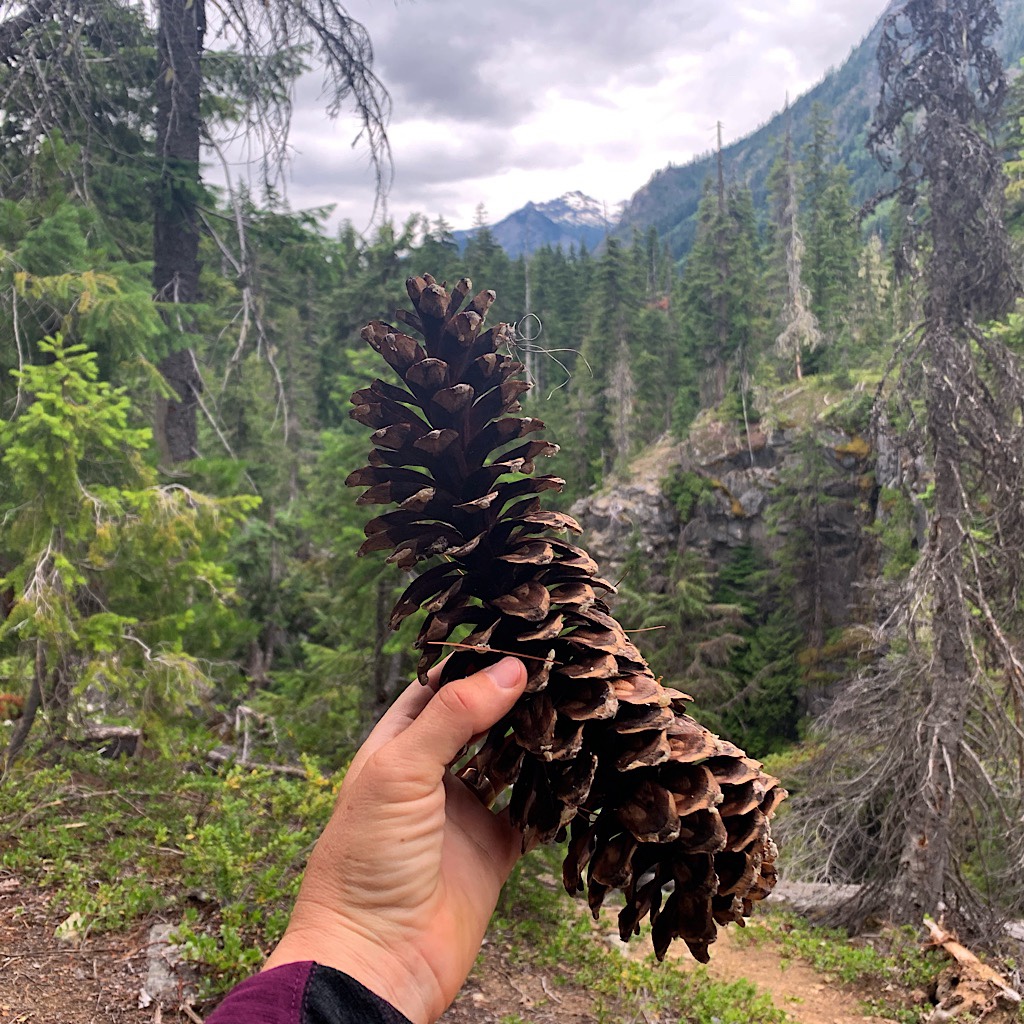 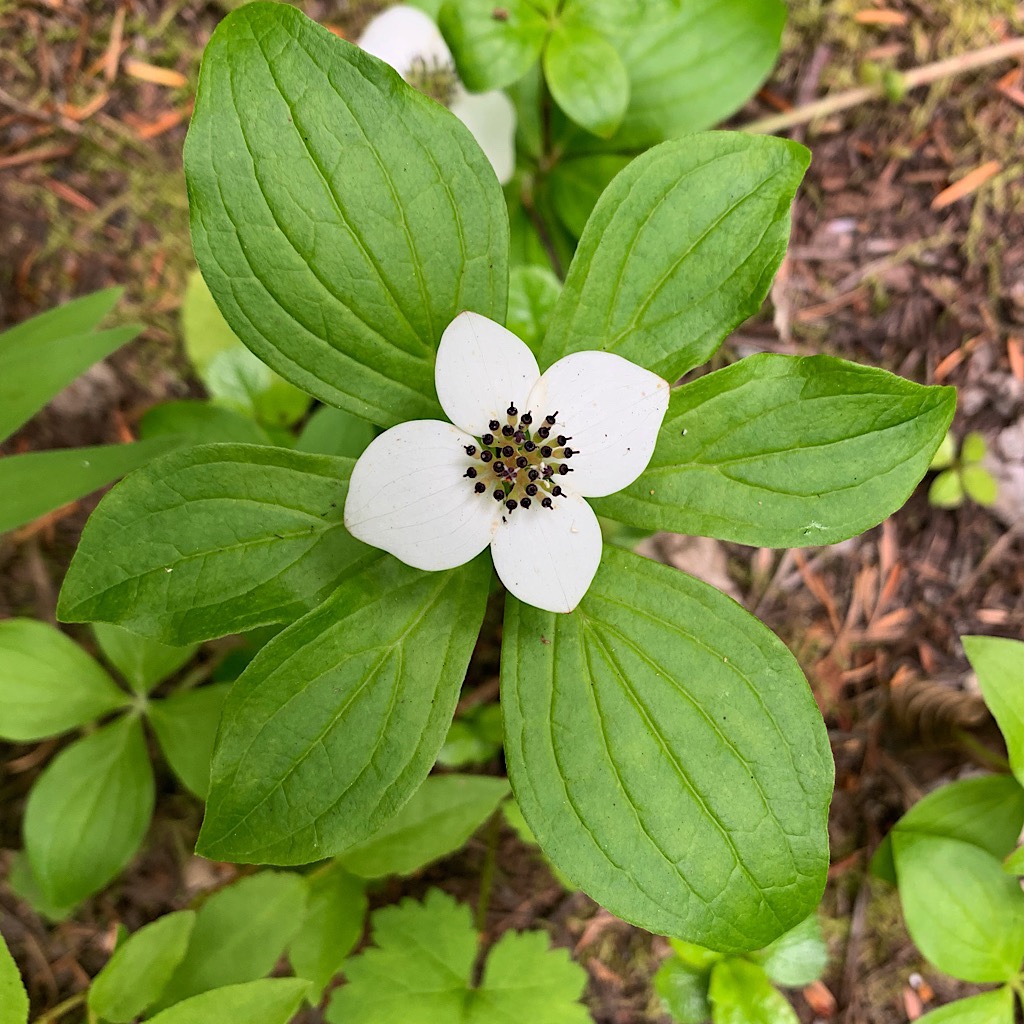 Saint Paul and my old life recede further away. Don’t get me wrong, I miss Richard, especially his physical presence – sitting on the porch with gin and a twist and laughing as motorists try and avoid the ever-growing potholes on Laurel Avenue, making dinner with our favorite Saturday night jazz lineup on the radio, walking down the hill to see the full moon rise from the Cathedral steps, holding each other close with the top of my head at his chin. Everyone here loves Richard already because he kicked me out in the most loving way possible to come on this trail and see what it might do to me. For some reason, my mind simply refuses to think much today about the recent unpleasantness.

This forest is filled with every large Pacific Northwest tree – fir, pine, cedar and the strong odor is enough to cure what ails me. Soon, I’ll push on, up and up over many passes in the coming weeks. I hope I find a site to set the alicoop with a view.

The trail crosses Agnes Creek again, but a pile of logs has taken out the foot bridge. A Frenchman decides to cross an iffy looking log, a Southern gal takes off shoes and socks, and I just plunge through like a Kiwi, soaked over my knees. 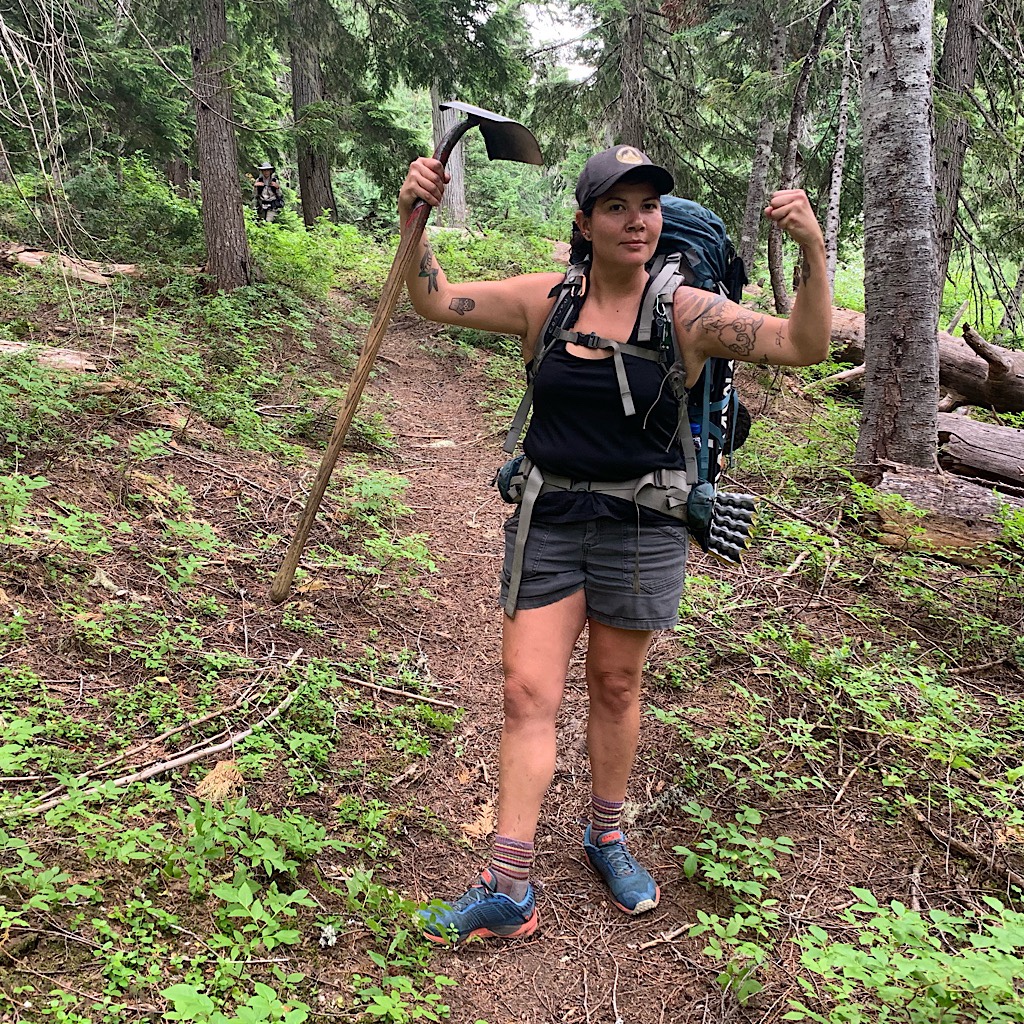 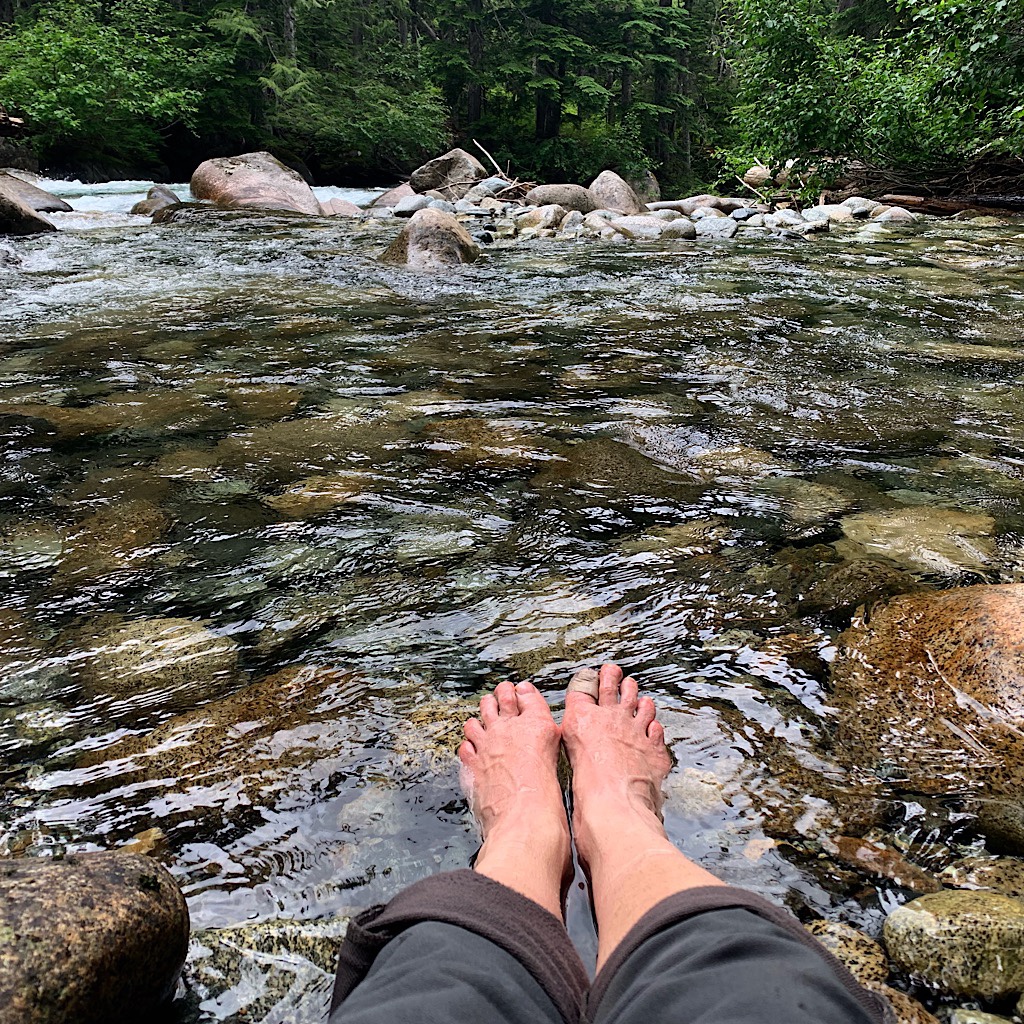 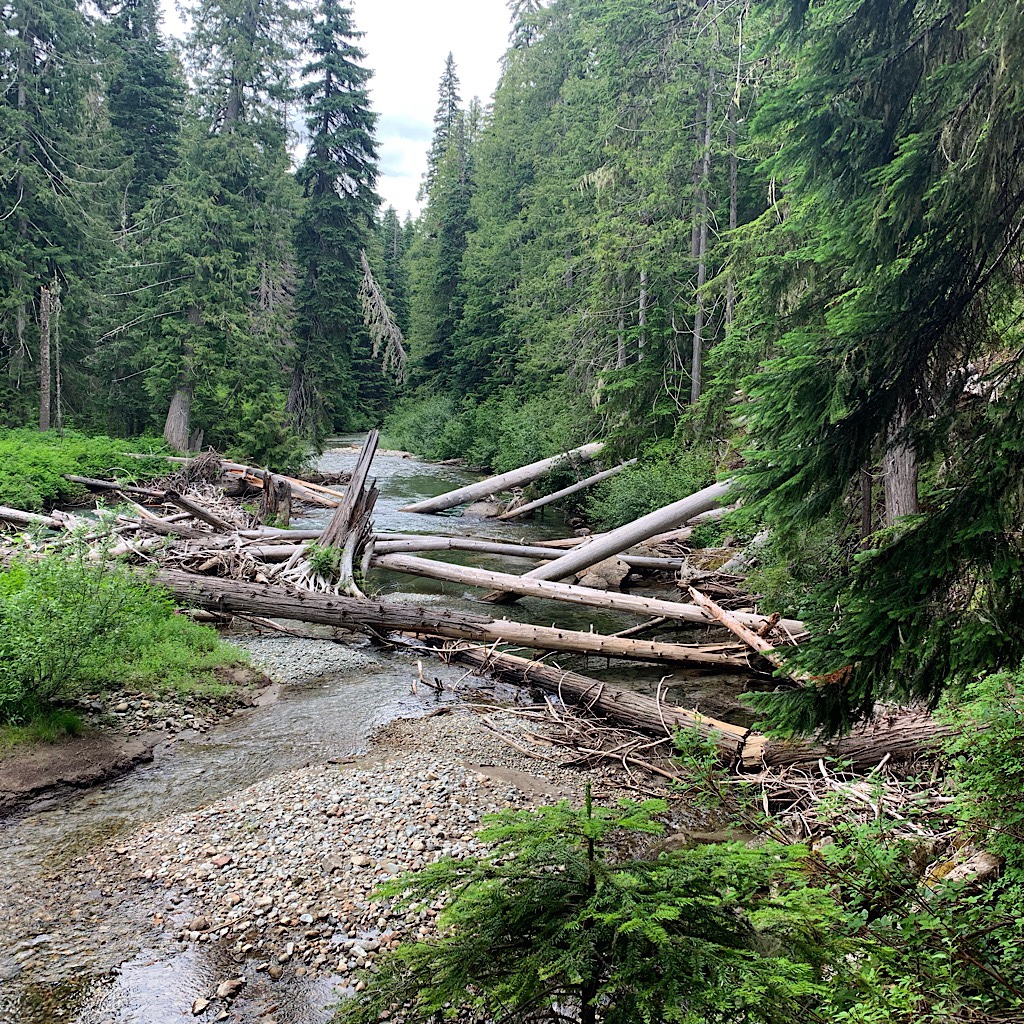 The trail becomes even more like the Te Araroa overgrown and gut busting. The views begin to open of jagged peaks, snow still piled at the base in one flat spot before everything seems to break apart into a million boulders. The sun comes out bright and intense and I stop on a steep incline narrowed by tall flowers to put on my hat. I cross numerous small streams and get hit by a cloud of ashy smoke. It’s a designated site, a lot of hikers are on trail and we all get a fire whether we want it or not. I see if I might set up my tent upwind, but the guy who lit it takes the whole space. “Can I squeeze in so I don’t have to breathe smoke? Or we can put it out…”

OK, so I move on and find a spot smack dab in the middle of a bowl of mountains, three waterfalls feeding my stream. As though the goddess cupped her hand and created a northern paradise. Sure, there are mosquitos, but I just put on my bug burka, sit on a log and rehydrate my amazing brown rice, broccoli, carrot, pepper and vegan sausage stir fry and delight in my solitude. 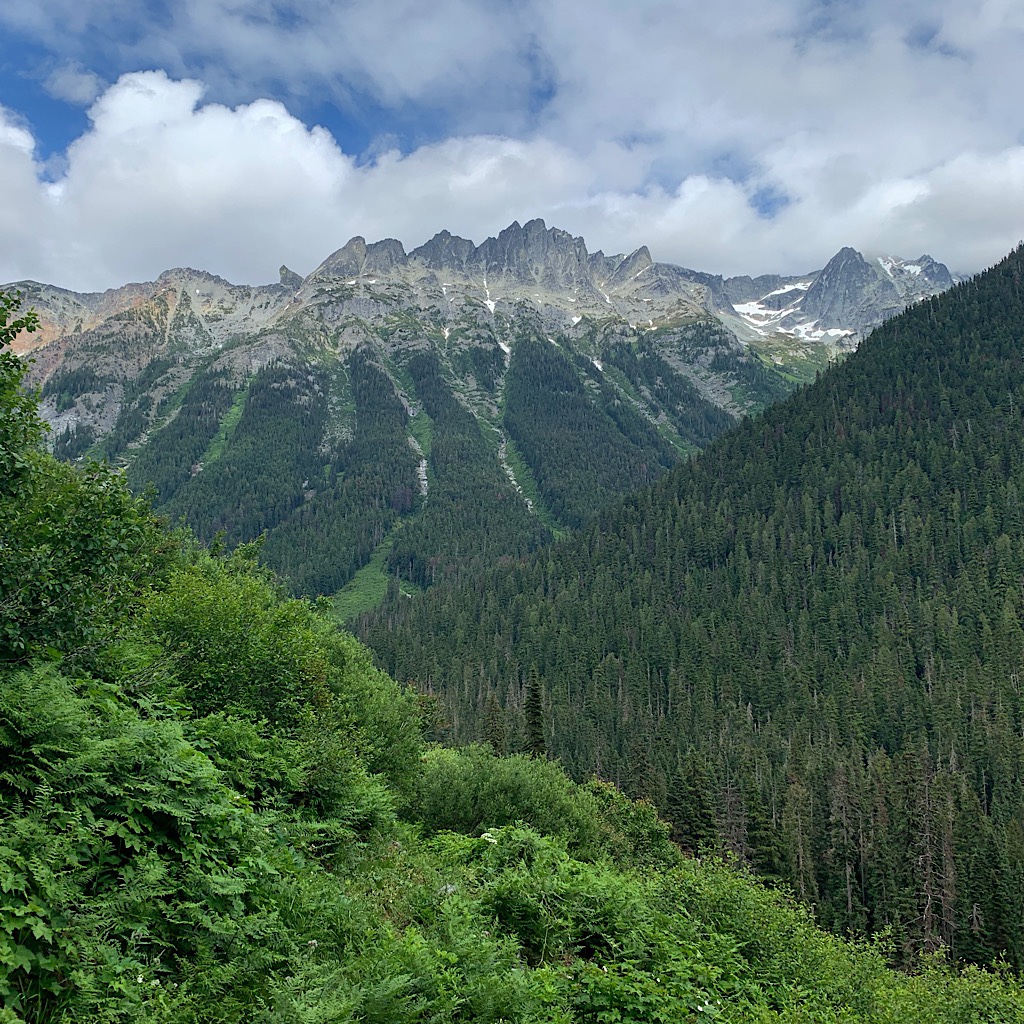 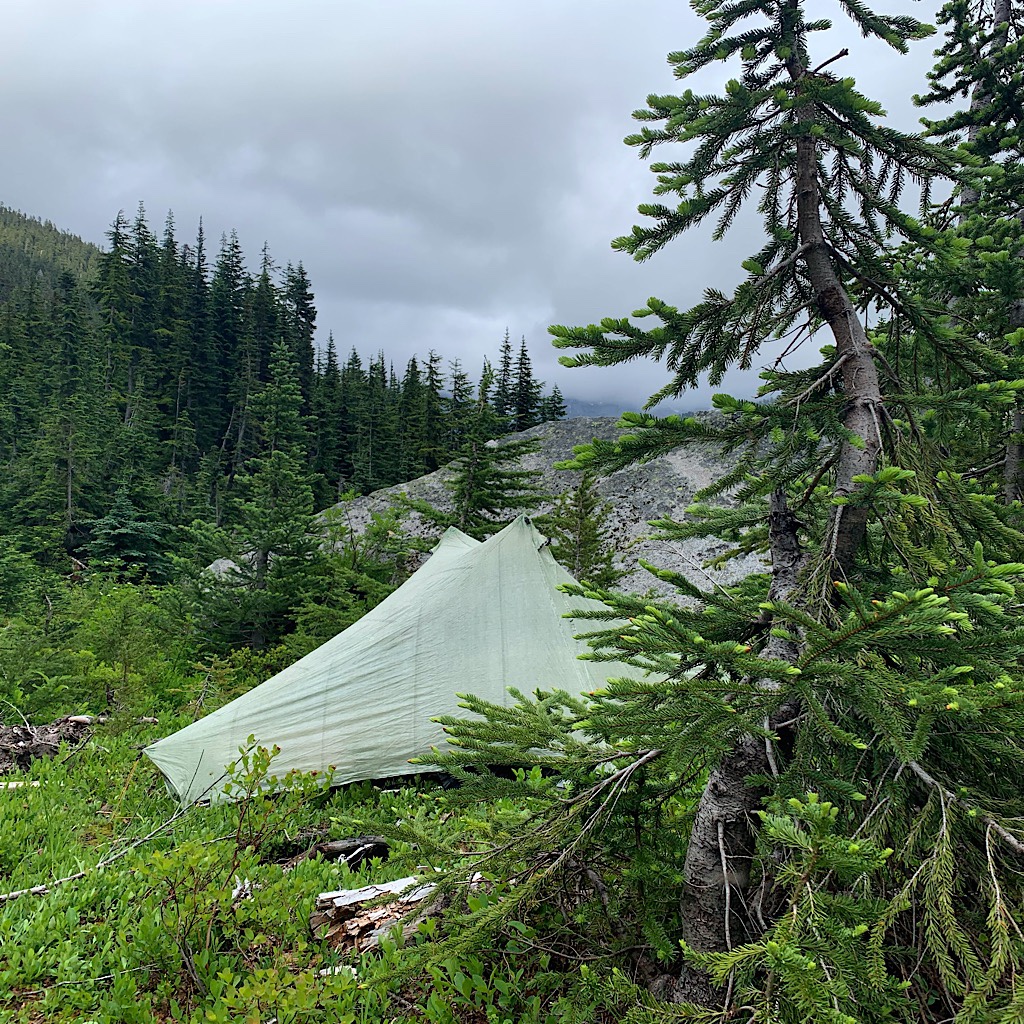 It’s early, but I’m all curled inside a thermal liner covered by my quilt. Now that the rain has stopped, I leave a door open to see the waterfalls, crashing in stereo. Mosquitos land on the netting.