You can waste your lives drawing lines, or you can live your life crossing them. – Shonda Rhimes 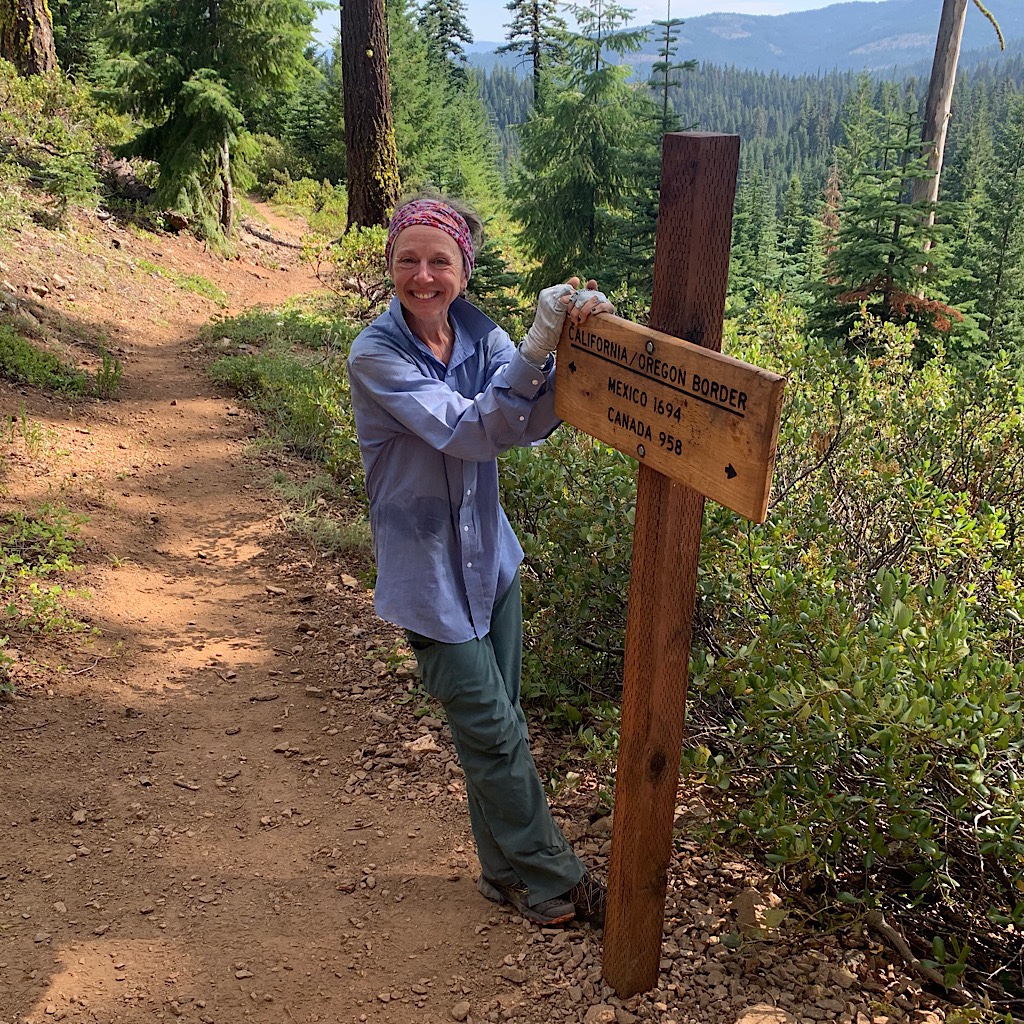 The morning is so – thankfully – mellow. I have a few tents near me, but the people in them are absolutely chill. We give a thumbs up to each other before I set off, then it’s up into meadows filled with a forest of wildflowers in all colors, some as tall as me. There’s water everywhere, and Aspen crowd in for a drink.

I forgot to mention that Maria says “Yay!” a lot. In fact she, her son and soon-to-be daughter-in-law have “Yay!” tattooed on their ankles. It slips my mind to ask Andrea and Tom to write on my backpack, and Maria remembers just as I am getting out of her car. She creates an exact replica of her tatt on Olive Oyl’s lid in ball point pen. I hope it survives the walk because it kind of says it all right inside this bowl of beauty under Mount Ashland’s summit. Again, I am thrilled to be without headphones so I can hear the cacophony of buzzing bumblebees, high on nectar. 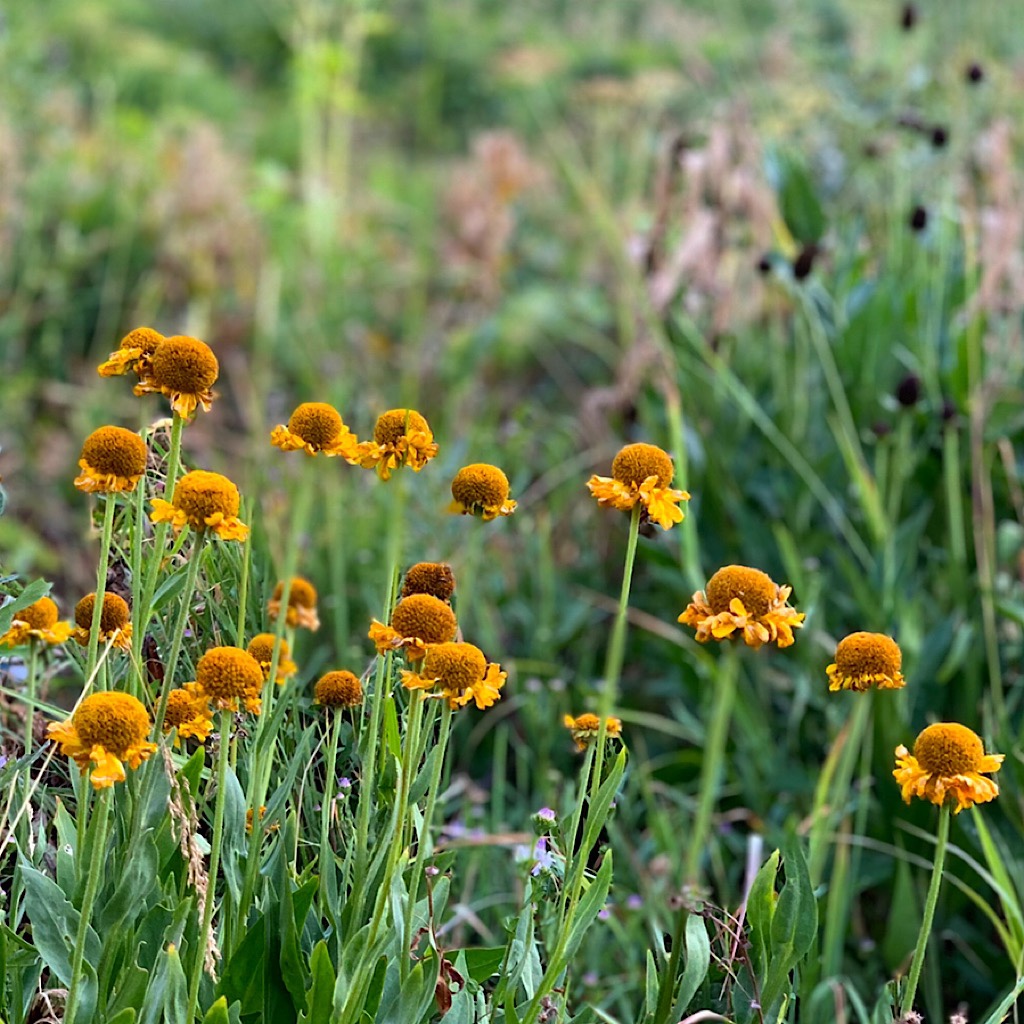 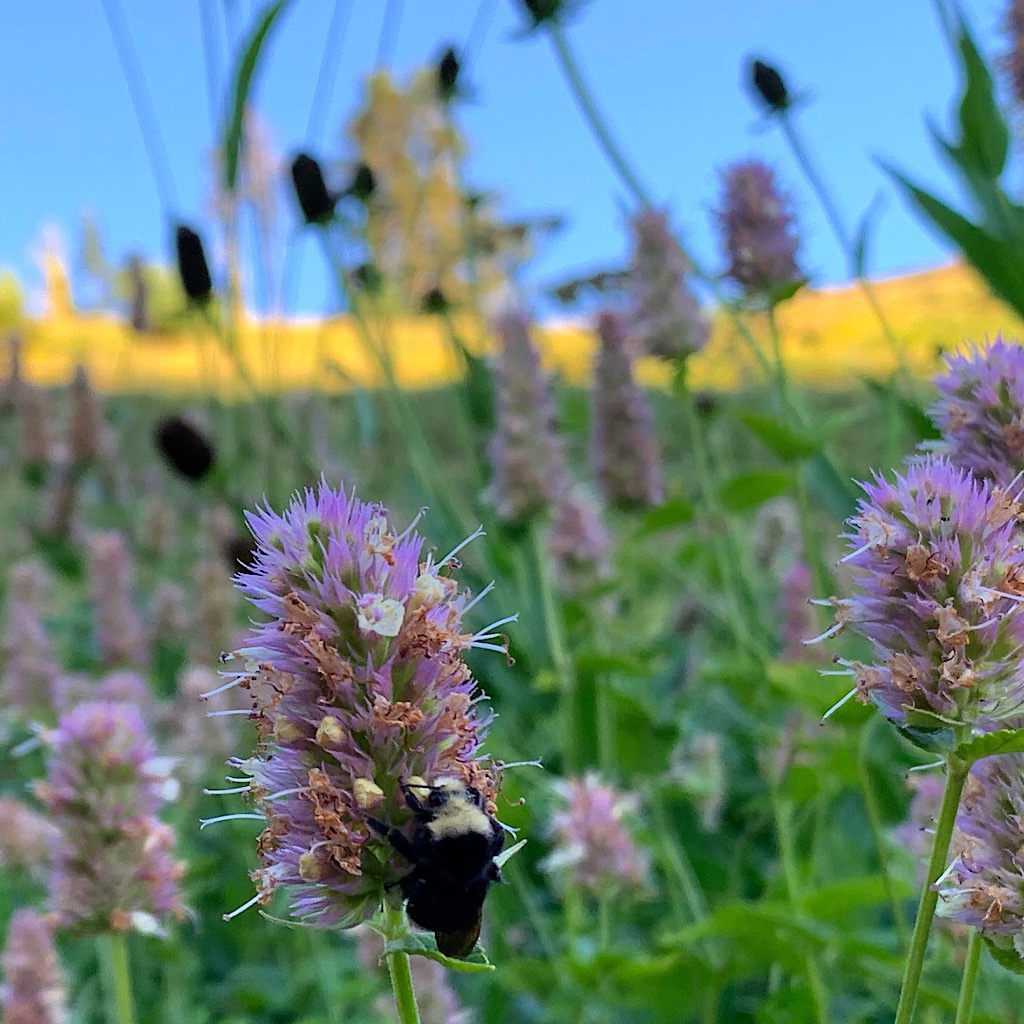 Yesterday, the happy day hiker asked me what my scariest moment yet has been. I said likely rain in Washington pouring into my open tent after I was awakened by a crack of thunder. I must say I prefer camping alone, but I do tend to tune into every noise, every twig crack, every rustling branch. The worst that could happen here might be rodents chewing into the tent or deer nibbling the handles of my Lekis for a salt fix. I will carry a bear-proof canister in the Sierras as required, of course. Black bears aren’t dangerous, just hungry.

The trail leaves this watery area for a drier patch, still a carpet of yellow flowers. At the pass, a trail angel – who should be awarded a prize for top angel – leaves two coolers of Shasta sodas and a lawn chair, tucked under a fir for a wee rest with treats in the shade. I am not sure what it is, but hikers crave sodas – the sugary liquid, the flavors and the carbonation. I am in heaven.

I sign the register, leave (some) sodas for the next hikers and begin to descend. I can just make out a meadow far below and I hear tinkling bells. Are these cows, I wonder, making their special music in time to their chewing? Several hikers pass, in far better moods they I’ve encountered. We share a few words as a trail runner passes me and steps aside to let a hiker come on the uphill. I am impressed. 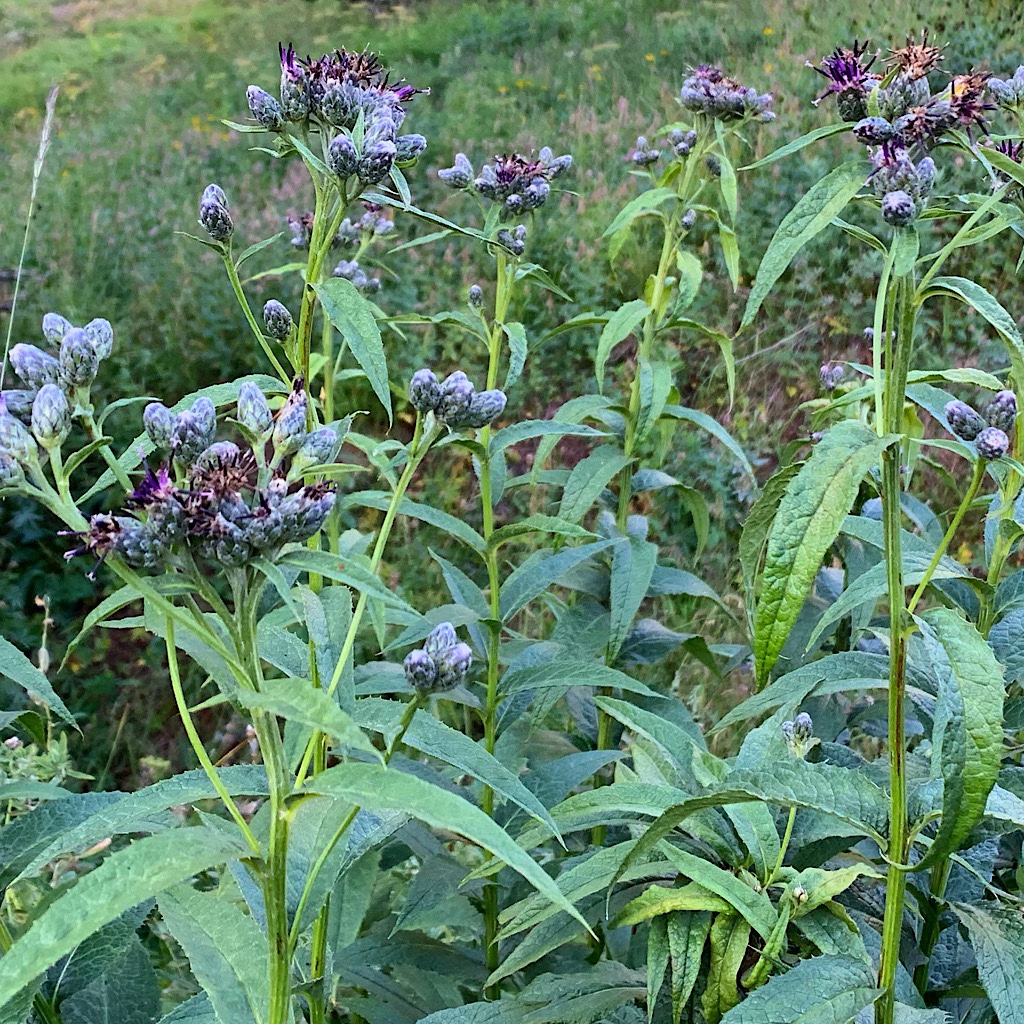 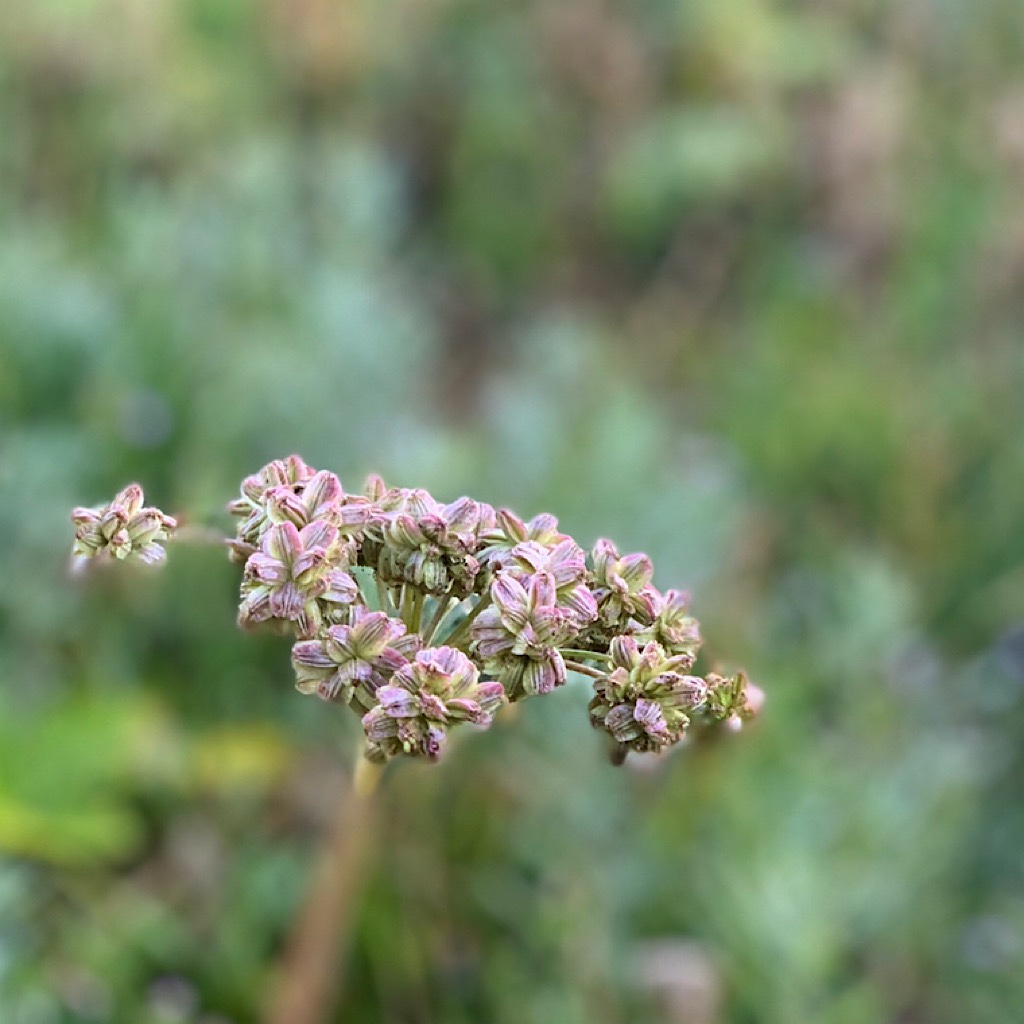 A man sits with his trail mix and I comment on the macrame on his gear. He calls it ‘pack flair’ before shoving another handful in his mouth. The trail goes steeply up onto an exposed and rocky section. The day is simply delicious, but I have to watch my step on the crumbling path. Two women ahead – one with binoculars, the other, a net – help me identify at least two of the hundreds of butterflies dancing before me. One is a blue copper, not to be confused with a simply named ‘blue’ who hatched out weeks ago. The other appears all orange, but is called a lilac bordered copper. The pink flower they’re attracted to is a Siskiyou willow herb. We laugh when they say you met a botanist and lepidopterolgist on the trail, as though a preamble for a joke.

Several older day hikers march through all business and name the deep purply-blue bell-like flower for me – the gentian. I turn a corner onto a kind of ridge peninsula and everything changes with the soil drier and huge Jeffrey pines framing the brown hills. Two more day-hikers tell me how proud they are of this range, the Klamath-Siskiyou, which runs east to west joining the Cascades to the coastal range. I had wondered why the PCT turned so sharply west and now I understand. The soil, she tells me, is serpentine and supports all sorts of rare plants. This is why people fought hard to save this region as a wilderness.

When I say goodbye, she touches me and says she wishes for me more surprises and joy – and that my body will hold up! I feel so blessed meeting these people, excited by their backyard and letting it rub off on me. 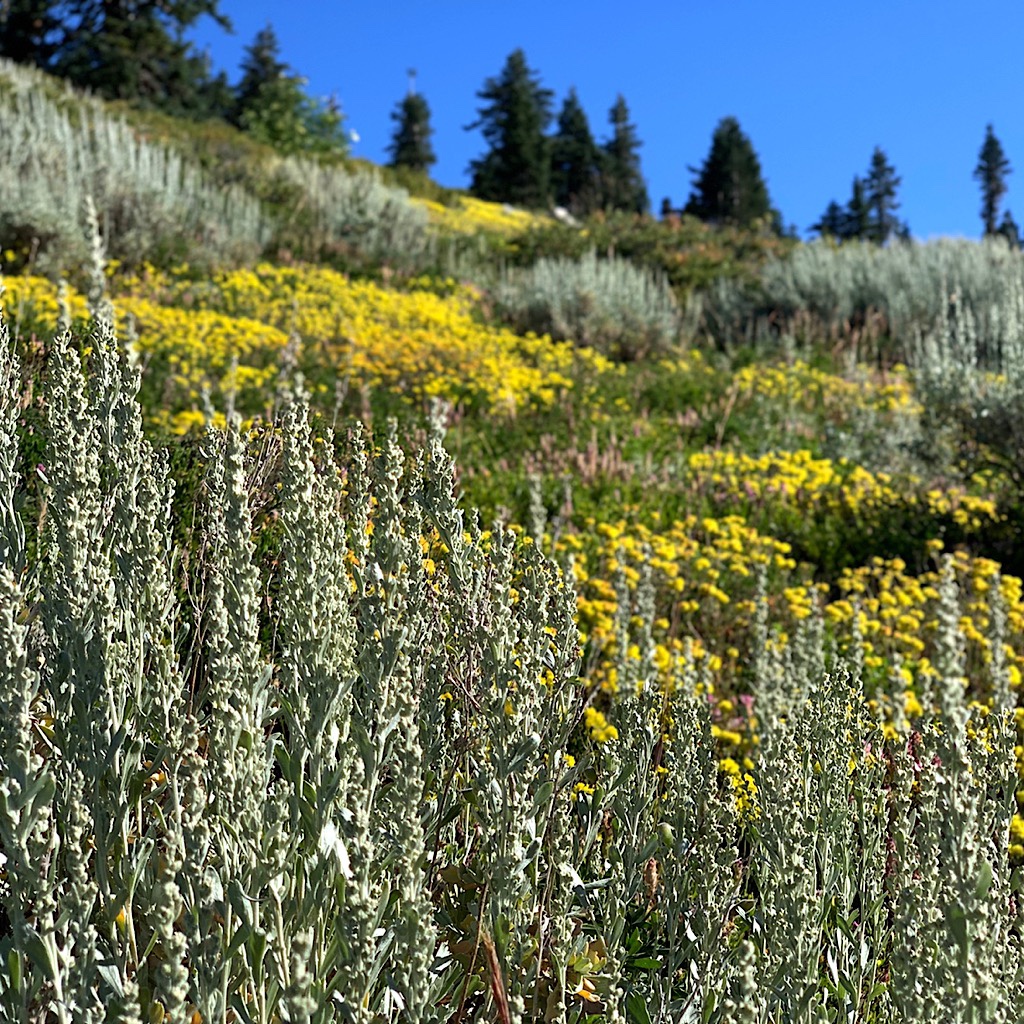 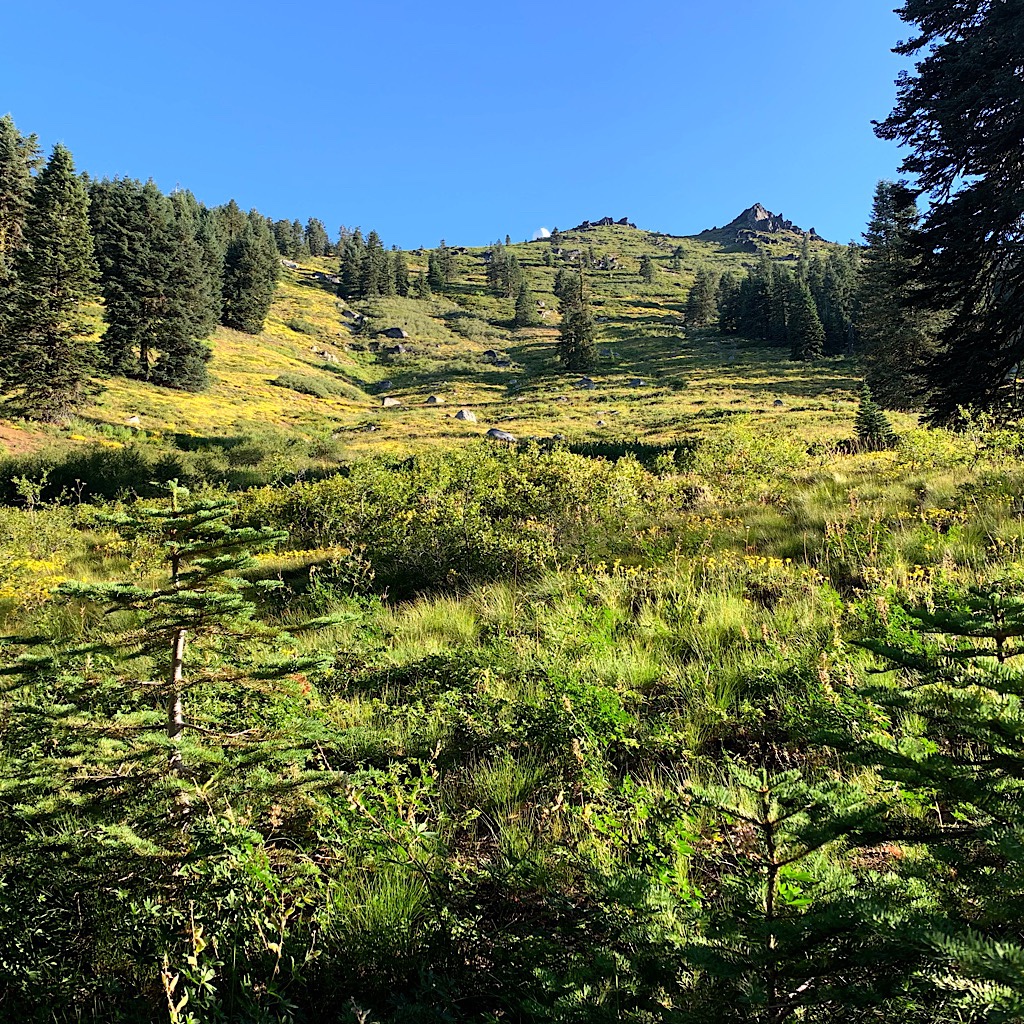 I keep climbing and see Pilot Rock receding in the distance. A group of thru-hikers take a break in shade and one has a distinctive Aussie accent, yelling, “Right on, you’re almost to Cal-ee-fornya!”

I think all NOBO’s are happier here because they’ve accomplished so much and have just crossed into Oregon, marking a certain rite of passage. There’s more wonder and excitement, more smiles and sharing. It certainly makes my day. At a rock in the shade with a view into ‘Cal-ee-fornya” I meet a John Muir lookalike who calls himself ‘Woodchuck’ and tells me he is having the time of his life. When I ask to take his picture, he complains about a man called ‘Juicy Fruit’ who focused on his crotch. Oh dear, I know that guy and shared laundry in Snoqualmie with him. That was a lifetime ago but I still feel embarrassed. 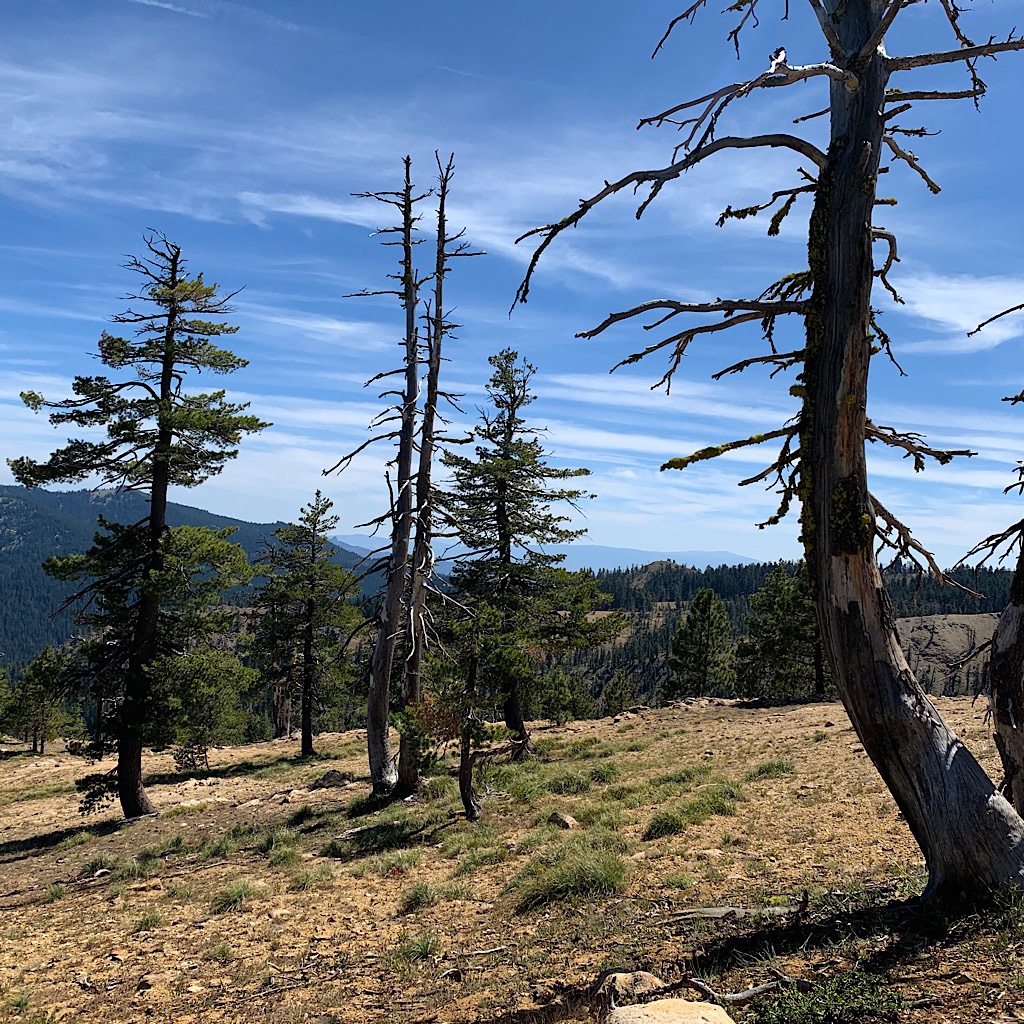 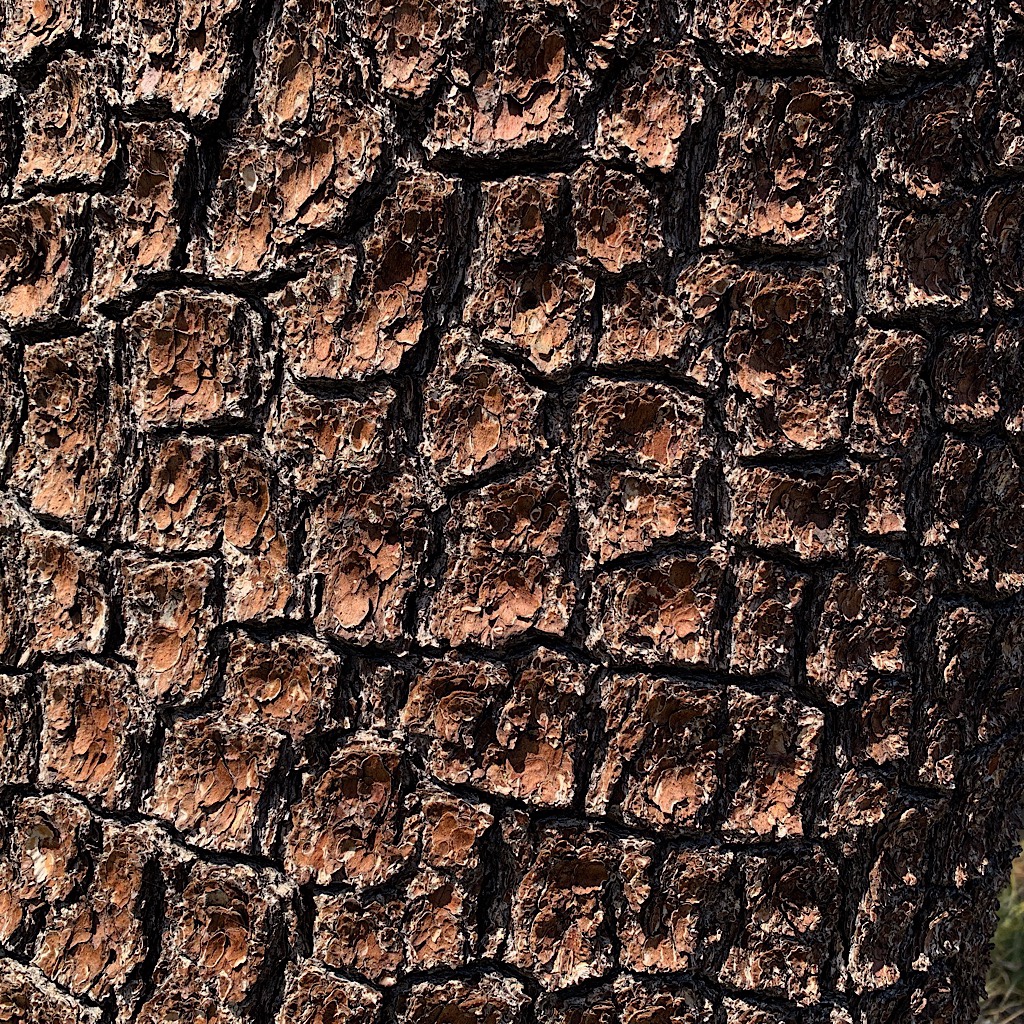 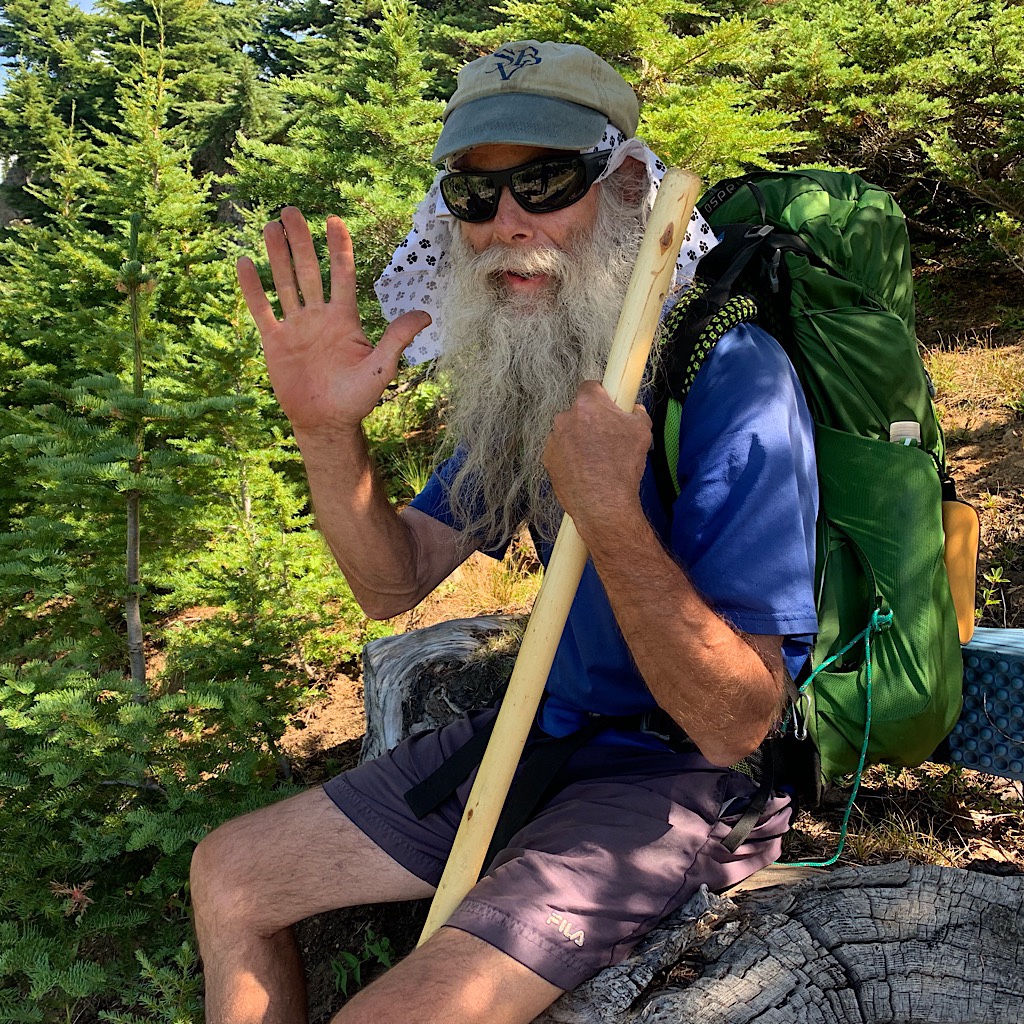 Moving on, I descend into manzanita, the bark peeling as though treated with chemical stripper. I meet a section hiker at a stream and drink up before hitting the border, where a welcoming committee just happens to be hanging out. Actually three hikers, but one agrees to snap my picture. Two hikers meet me walking down, one saying, “Welcome to California. You can check out anytime you like, but you can never leave.”

The cows are mooing with bells dinging in the meadow. I briefly look inside a cabin, but it feels too early – and too weird – to camp. So I head up and up again to a piped spring. There is camping, but right next to the road, so I hunt in the woods and find one wee flat spot under a Cedar. I can’t be seen, even from the trail as a loud group of hikers come crashing through in the pitch dark. At least they won’t try and camp with me. And hopefully neither will the guy cruising up in his ATV, country music as his soundtrack. 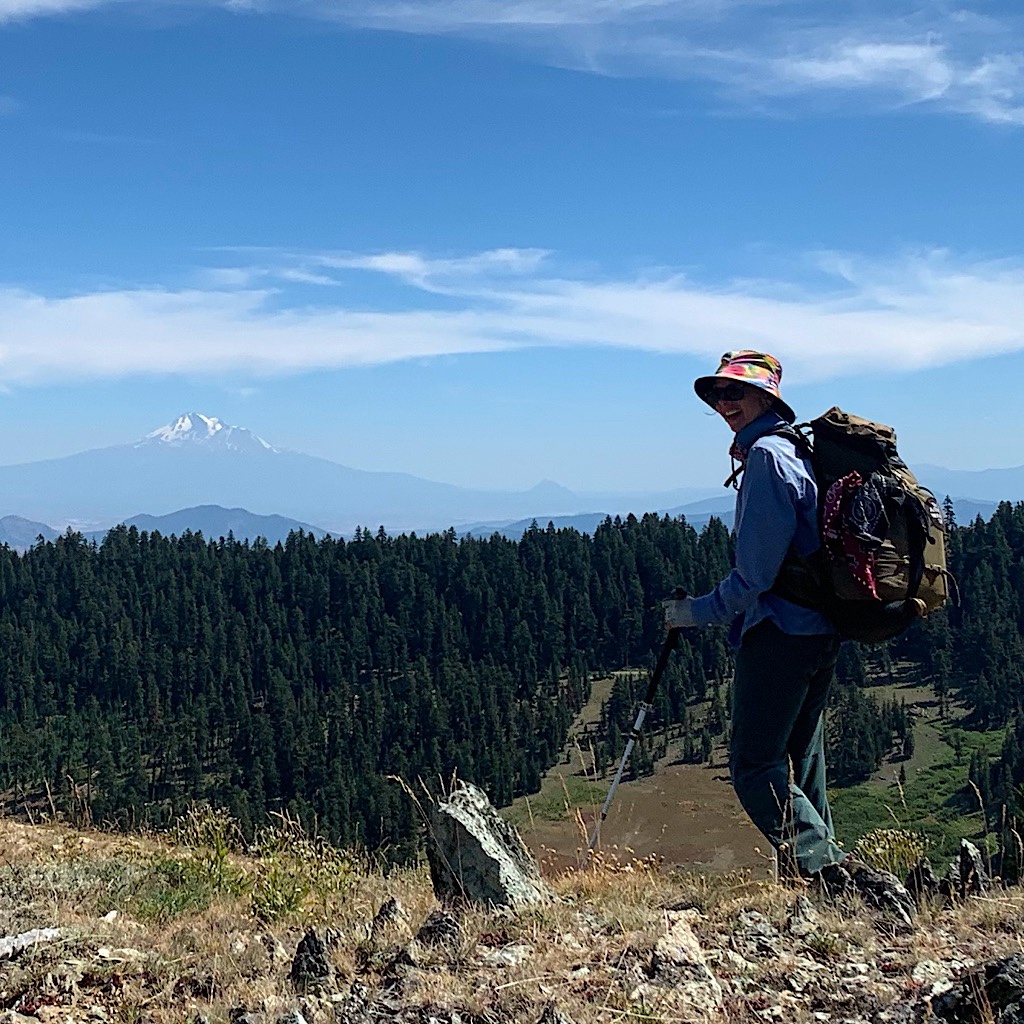 All is quiet, but a few creatures milling about. I’ll keep a light handy – and my scary, bellowing voice – just in case. Such a fabulous day. I can hardly wait to see what tomorrow brings.