You are the one that possesses the keys to your being. You carry the passport to your own happiness. – Diane von Furstenberg 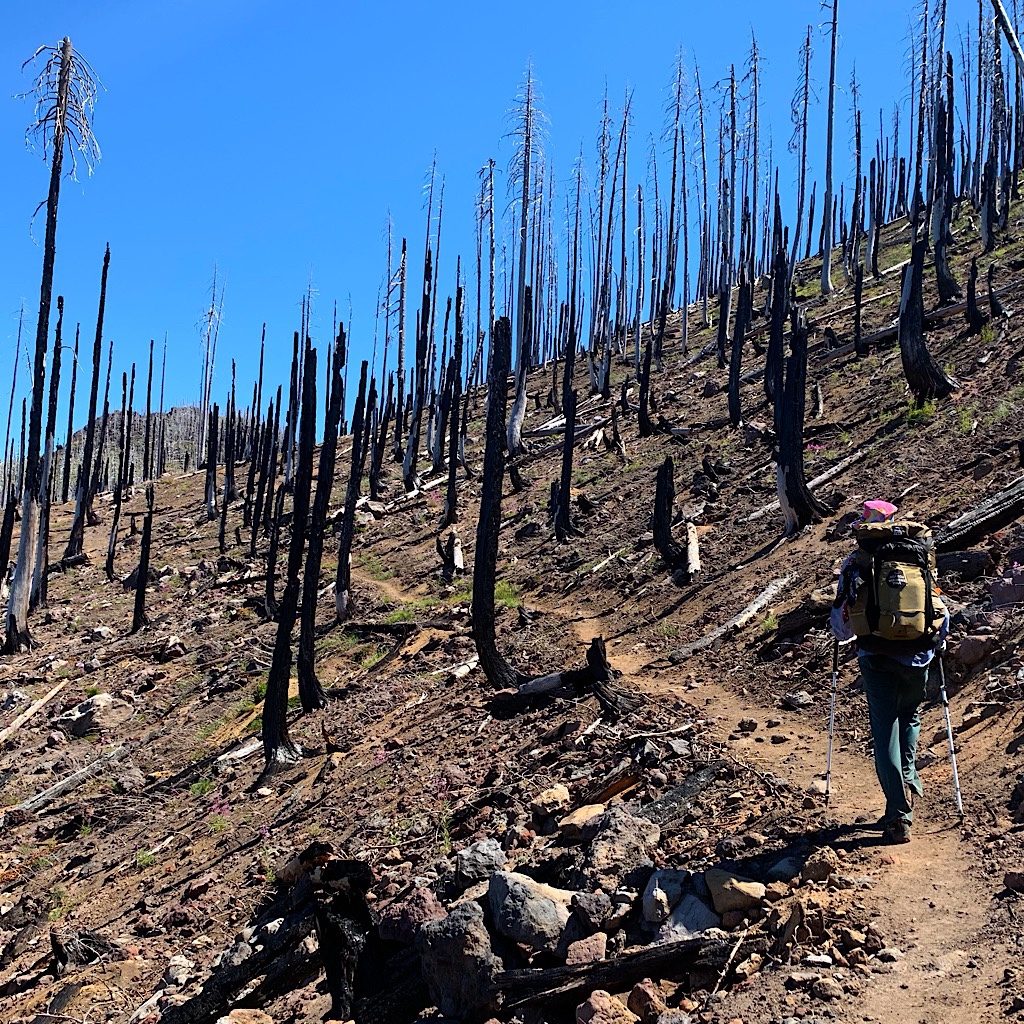 It was a beautiful night of a full moon lighting up my little clearing in the forest. My backpack slumps and jolts me awake as I shine my light and use my full-on ‘scary’ voice. It doesn’t help that mountain lions have been ‘active’ in the park. I figure they followed me here.

Just as the sky lightens a tiny bit, two guys walk past and I catch, “I don’t want to go back to San Francisco,” which pretty well wakes me up for the day. It was lovely while it lasted, I think, as I organize my gear, have a quick coffee and head to Mazama. 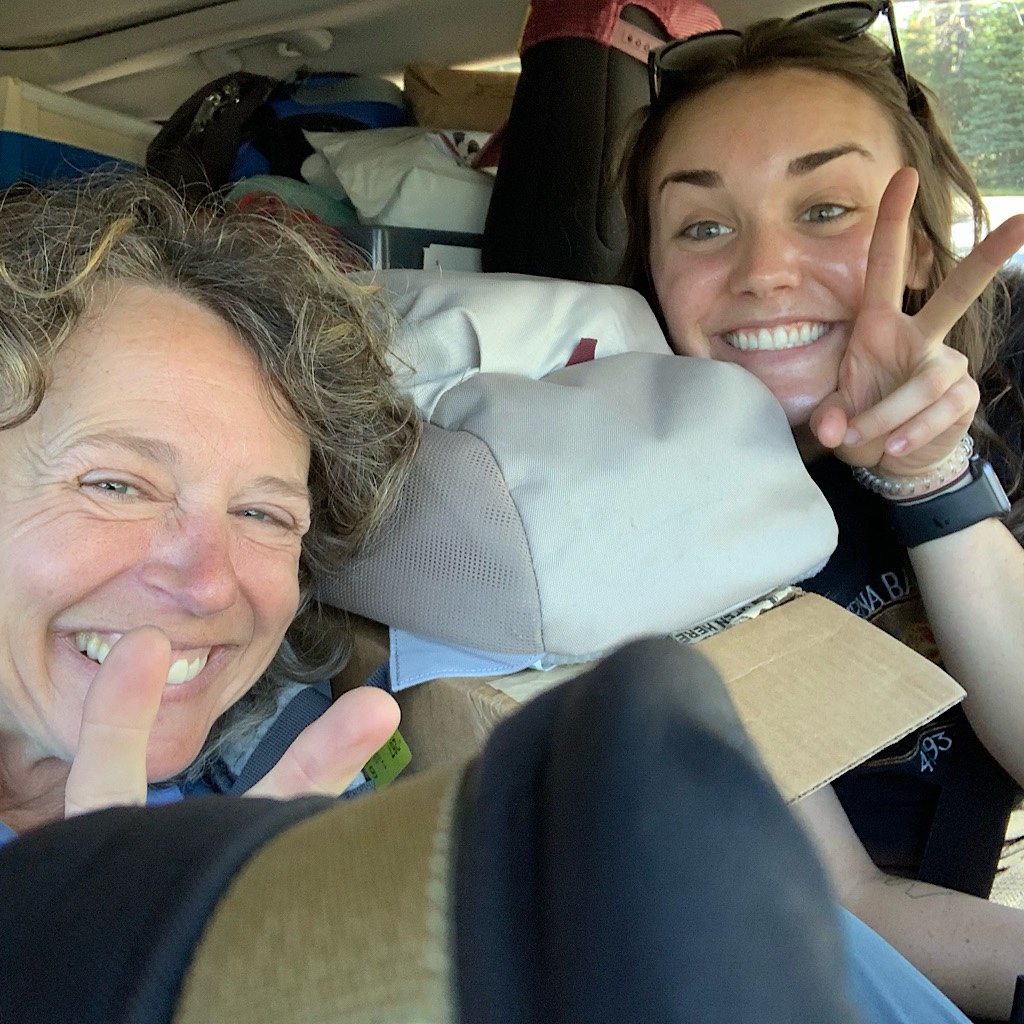 It’s up a hill, but my food bag is empty and I carry no water. Previous hikers suggest taking the road, but I risk careening down towards Annie Springs which is a bit steep and sends me under a bridge into New Zealand style tramping momentarily on eroded cliffside and over massive overgrowth.

This ‘trail’ goes nowhere and so I head straight up to a proper flat trail that leads right to the store. I was warned it would be a 50/50 chance my boxes have not arrived, but the, shall-we-say ‘distracted,’ clerk find both of them easily and I head on over to the restaurant for an overpriced breakfast.

To be fair, Mazama Village does not charge the usual $10 per package to hold them, so I am happy to support their economy. But first I sort things at a bench. Richard sent me a new pair of La Sportivas! My old ones have taken me over 800 miles through rain, snow, mud, sand, lava rocks and some of the most beautiful country I have ever seen. 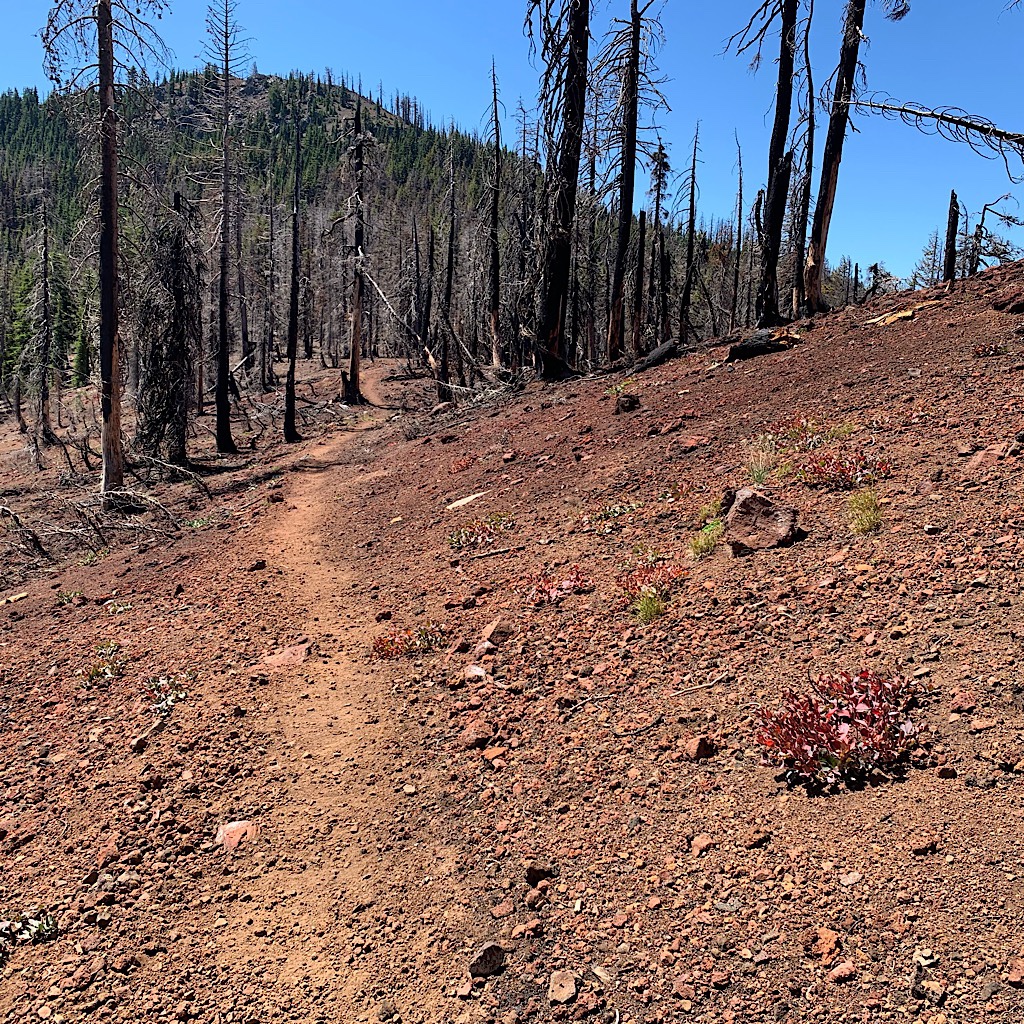 My friends at Balega sent socks, so I quickly make a switch to new foot gear – not including my Super Feet insoles which I’ll use a bit longer. Richard also pops in two fresh bandanas, one for my pot and one for peeing. I notice he’s included a little ‘new shoe’ kit of pain killers and medicated bandaids. Hopefully I won’t need those!

I’ve asked for way too much food. I simply can’t plan how much to take, so I give away some jerky to a nice looking young man curious about my hike, then hand a few packets of tuna to a guy all in leather riding a BMW motorcycle. They both seem quite pleased.

It’s still far too much, but I stuff it in Olive Oyl, then head inside to eat. I end up sitting next to a Vietnam vet who tells me I look fit and ‘beautiful with all my curls.’ He worked in a steel mill that was closed down and when he checked the help wanted ads in the LA Times, he found a job for a K-12 music teacher in a small town just outside of Sequoia National Park.

Of course I asked him if he plays every instrument – and he does, and sings too. He’s 68 but admits he still substitute teaches and wishes he’d walked the PCT when he was able. What a lark to meet such a charming man who came up to see Crater Lake, a place he hasn’t visited since childhood. 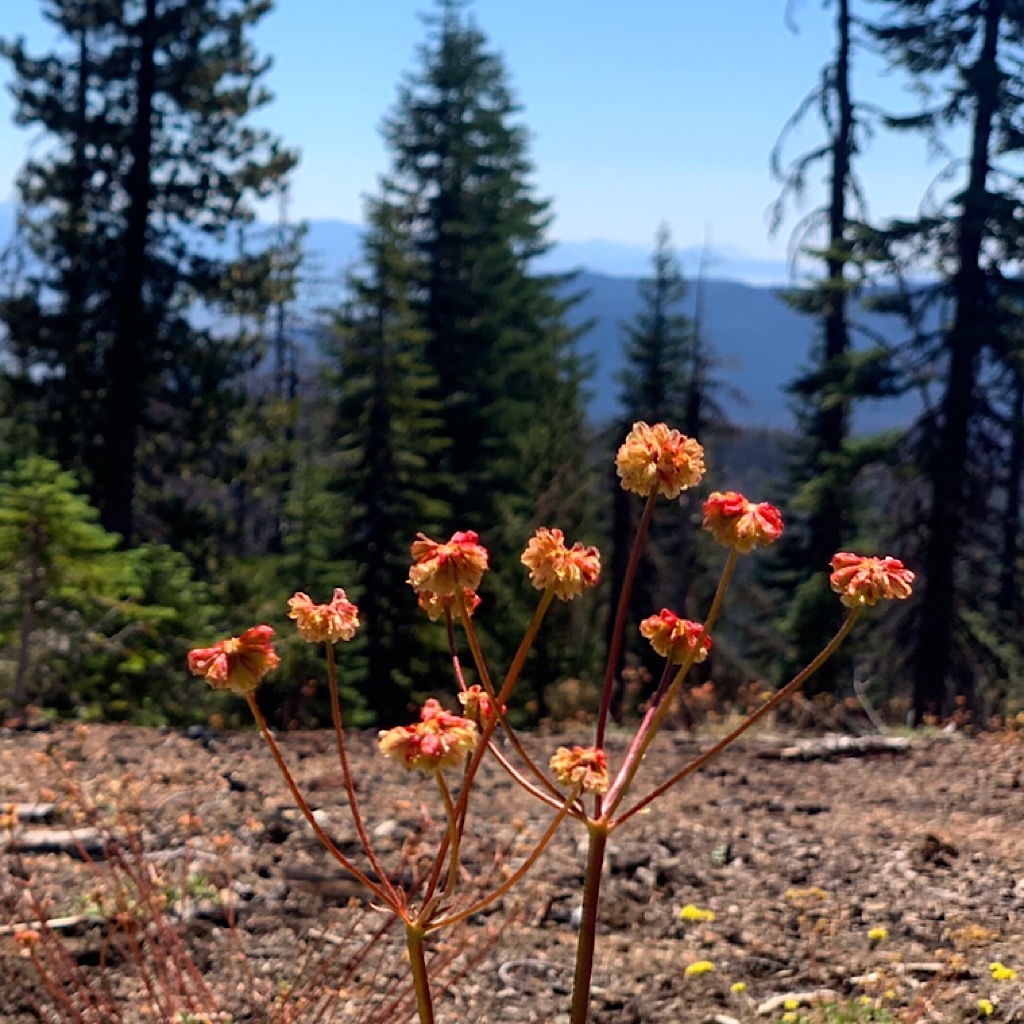 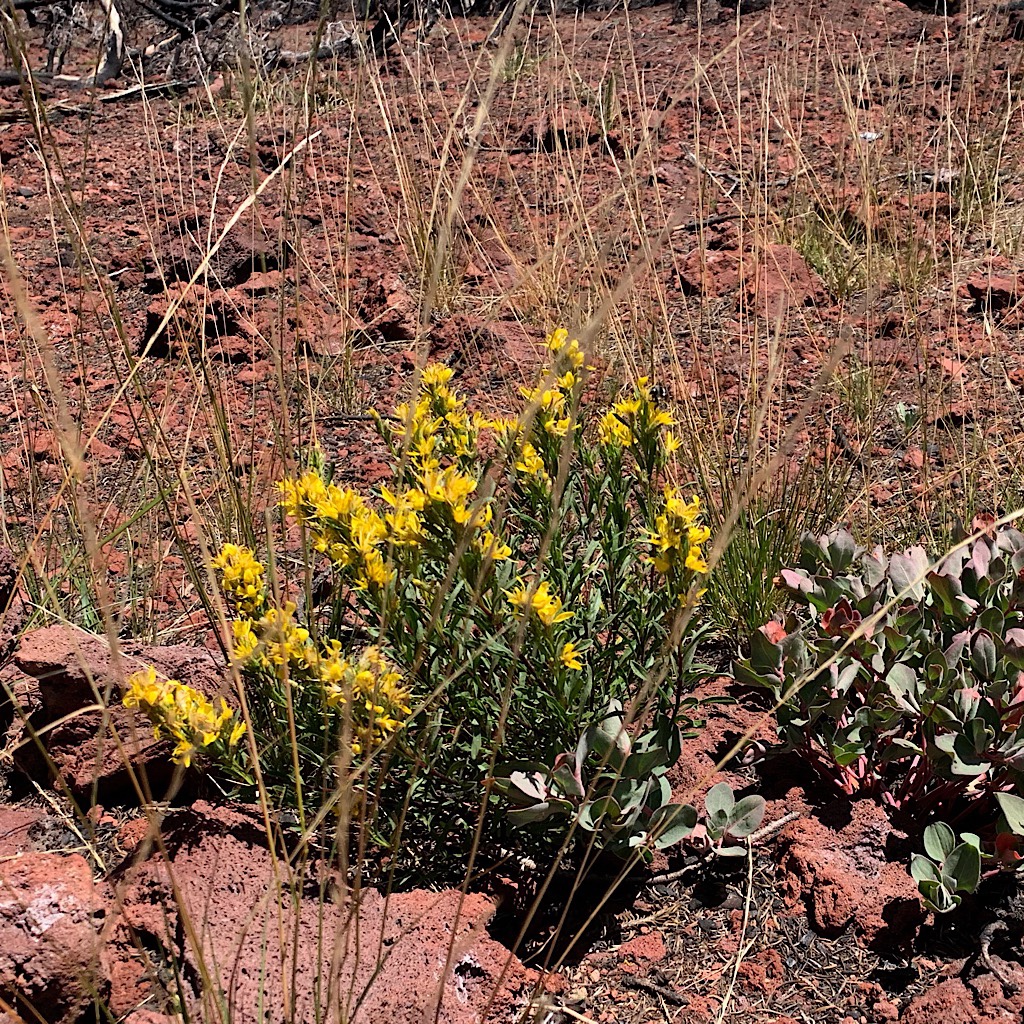 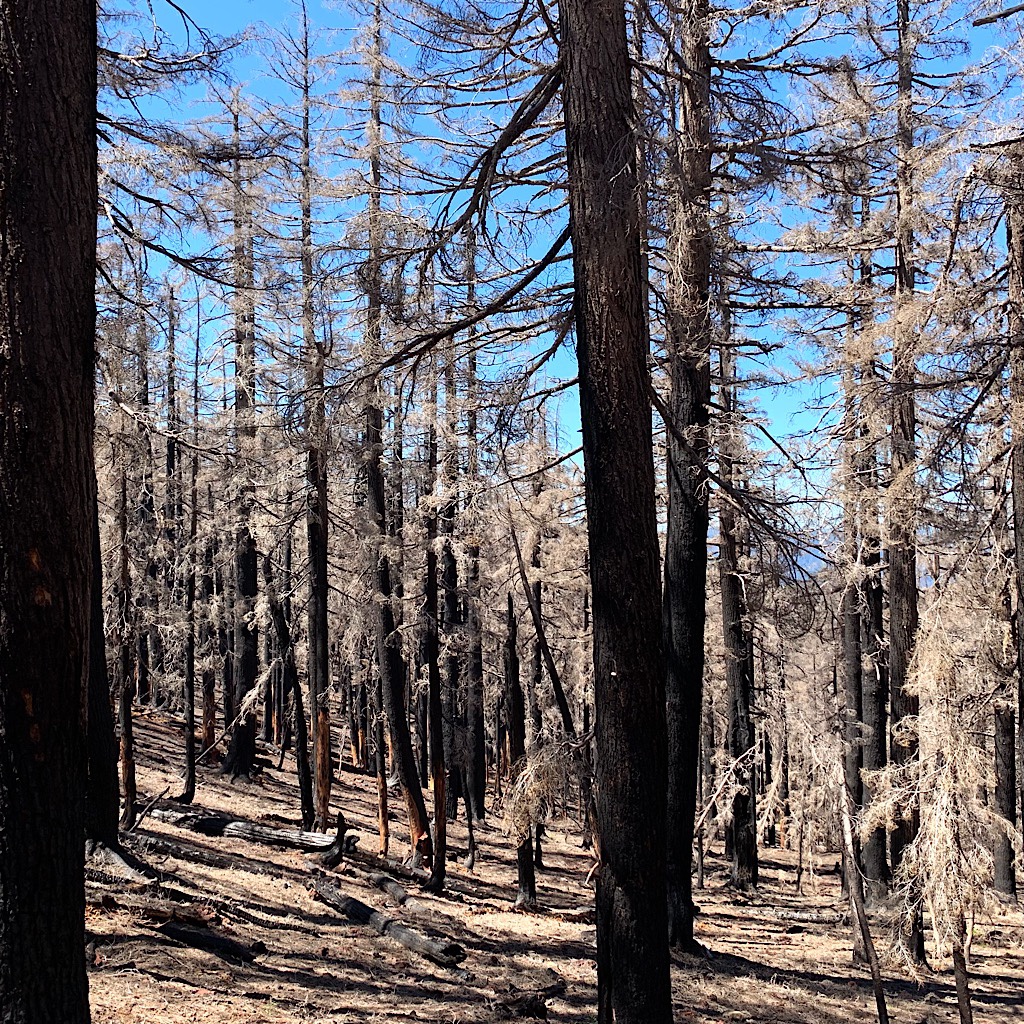 I think about music in my life and what’s next for me, but try to tamp down my anxiety. Whatever I come up with, I have the best person to share the adventure of my life with in Richard. No matter what happens, we’ll be together and singing in harmony.

I head back over to the store hoping the wifi is better, but it’s not. Here I meet David, a hiker from way back in Snoqualmie who wore just a towel to do his laundry – clearly everything was dirty. He’s a delightful person but will be way ahead of me in no time. ‘Shrink’ appears as well, but I don’t recognize him as all the men look the same with their hiker beards. I haven’t seen him since Goat Rocks and he asks about Cheerio. I tell him she is injured and went home and he says she is likely the most well adjusted and friendly hiker he’s met. I miss her.

Then a young woman shows up to fill a huge plastic jug with water at the public fountain. We get to talking and I learn her name is Cassie and she is a Trojan. USC is my alma mater so we exchange stories. I tell her I’m ‘in between jobs’ at the moment and she says it’s best to do what I’m doing right now rather than mope at home. 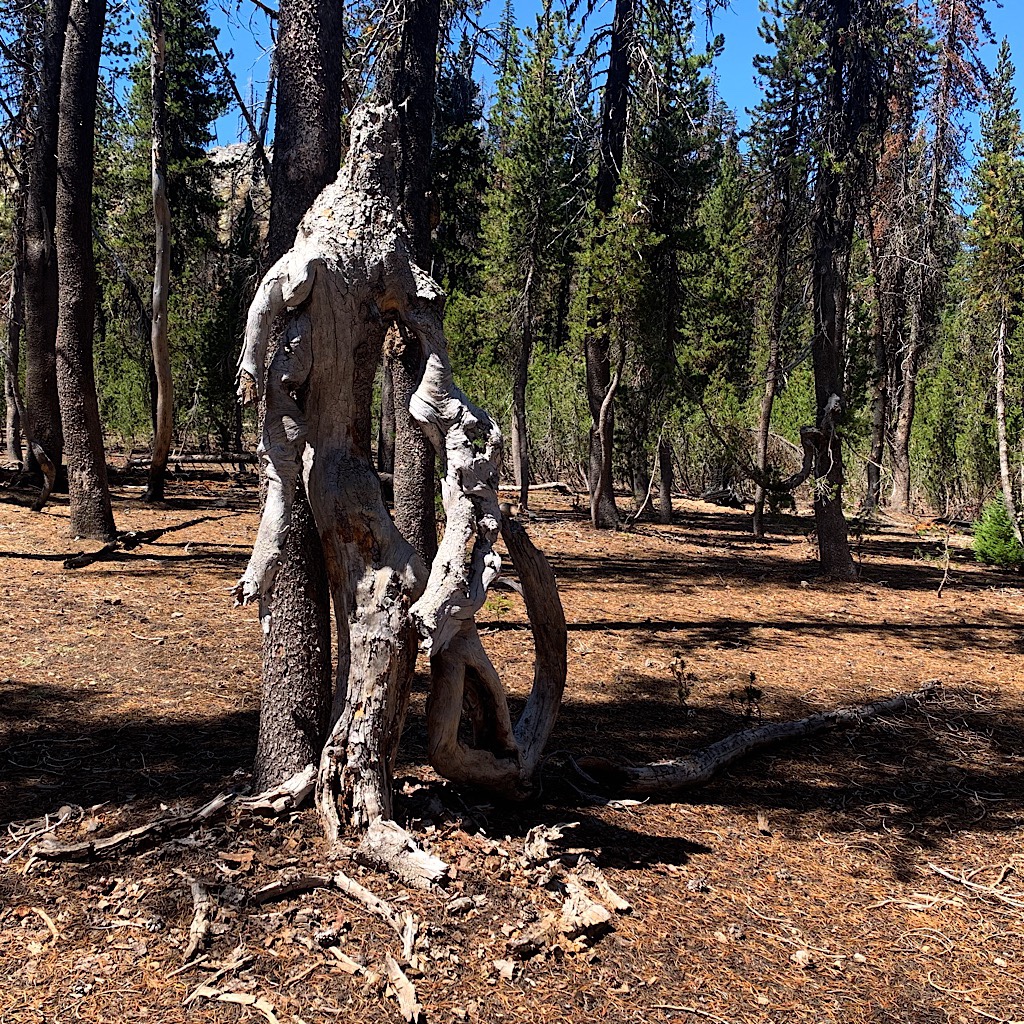 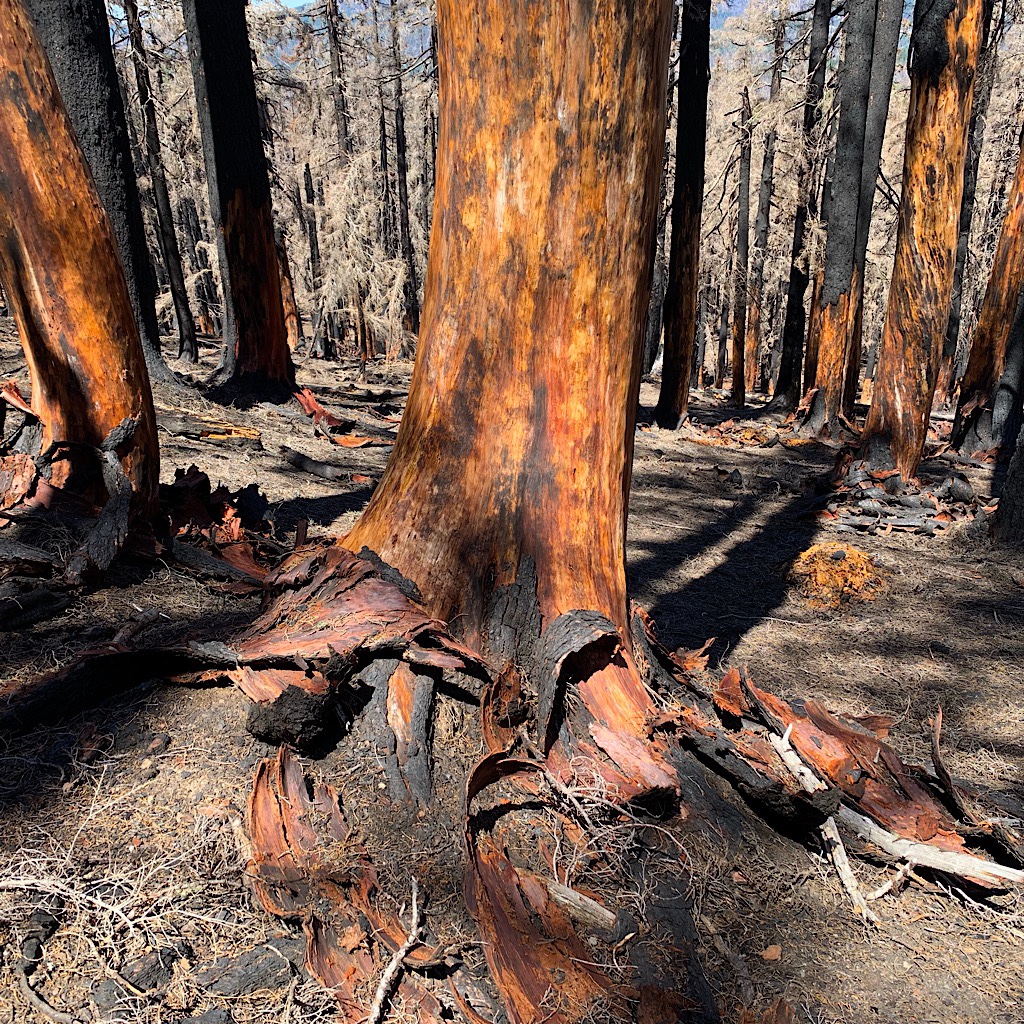 It’s just what I need to hear, feeling pumped up to take advantage now while I can and walk this thing. She drives me back up the road to the trail with my very overloaded pack. I drink a liter before leaving and carry two, plus all this food. She interned at Clif Bar, so hands me a pile of gels and bars, like I really need more – and off I go, 20 miles until the next water.

The trail starts easy, a bit of up and down in shady forest. I meet up again with a hiker I have hopscotched with for weeks. He hammocks and uses a big umbrella for the sun. I’m touched he remembers me, recalling a brief conversation we had days ago. He complains that he has far too much weight trying to carry for five days, and I realize I do too, but I go slowly and take breaks.

The trail is dry, cut into crumbling red pumice. It comes up high and I can look back at pointy mountains. I park myself in shade seven miles in and drink a third of my water. I can sense the pack weighing ever so slightly less. A hiker comes up the trail, his phone on full blast squeaking out something awful. I start to whistle a tune and drown it out.

I keep whistling, humming, and singing as I move on, the air a pungent mix of pine and burn. I was warned I would be in full sun for almost half the day. Some of the burn area still maintains a canopy, the branches singed of needles and curling like fingers, ghostly gray against exposed fleshy orange wood, its bark in piles below. 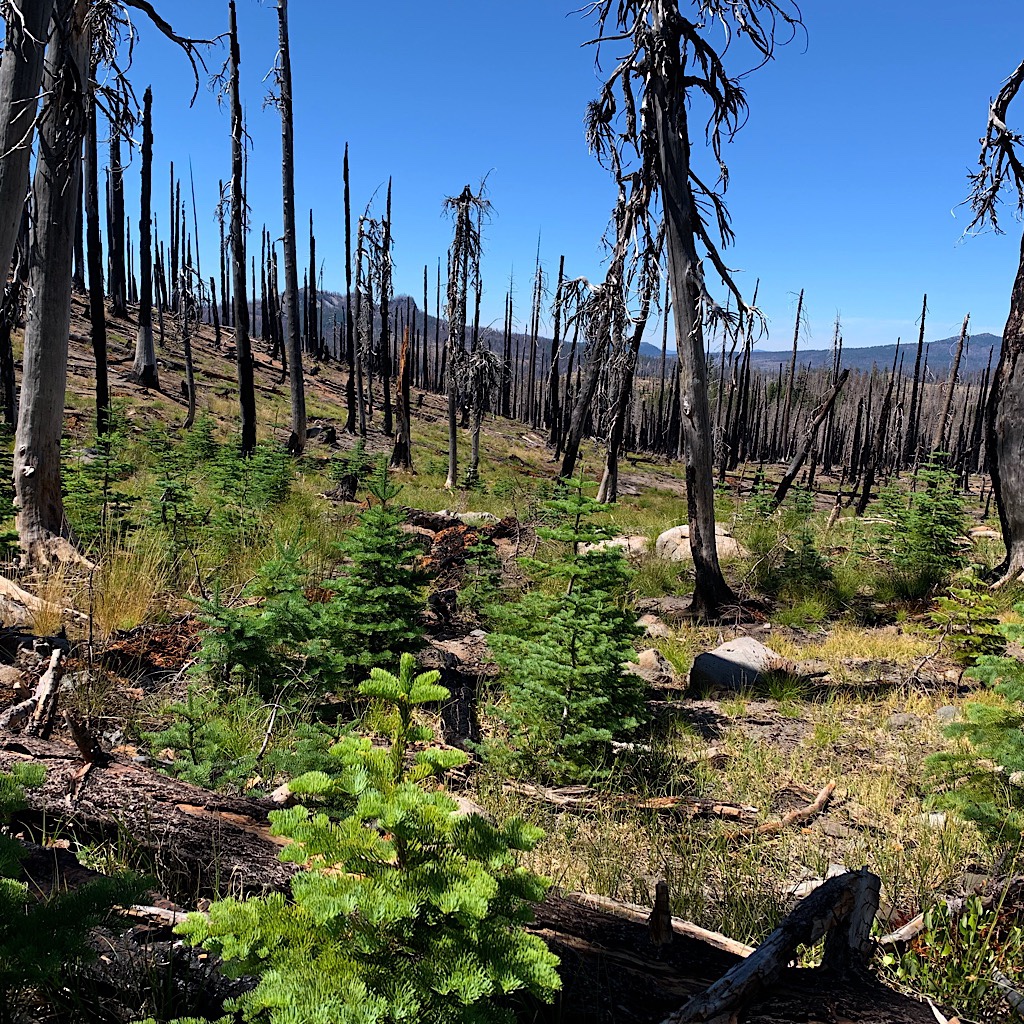 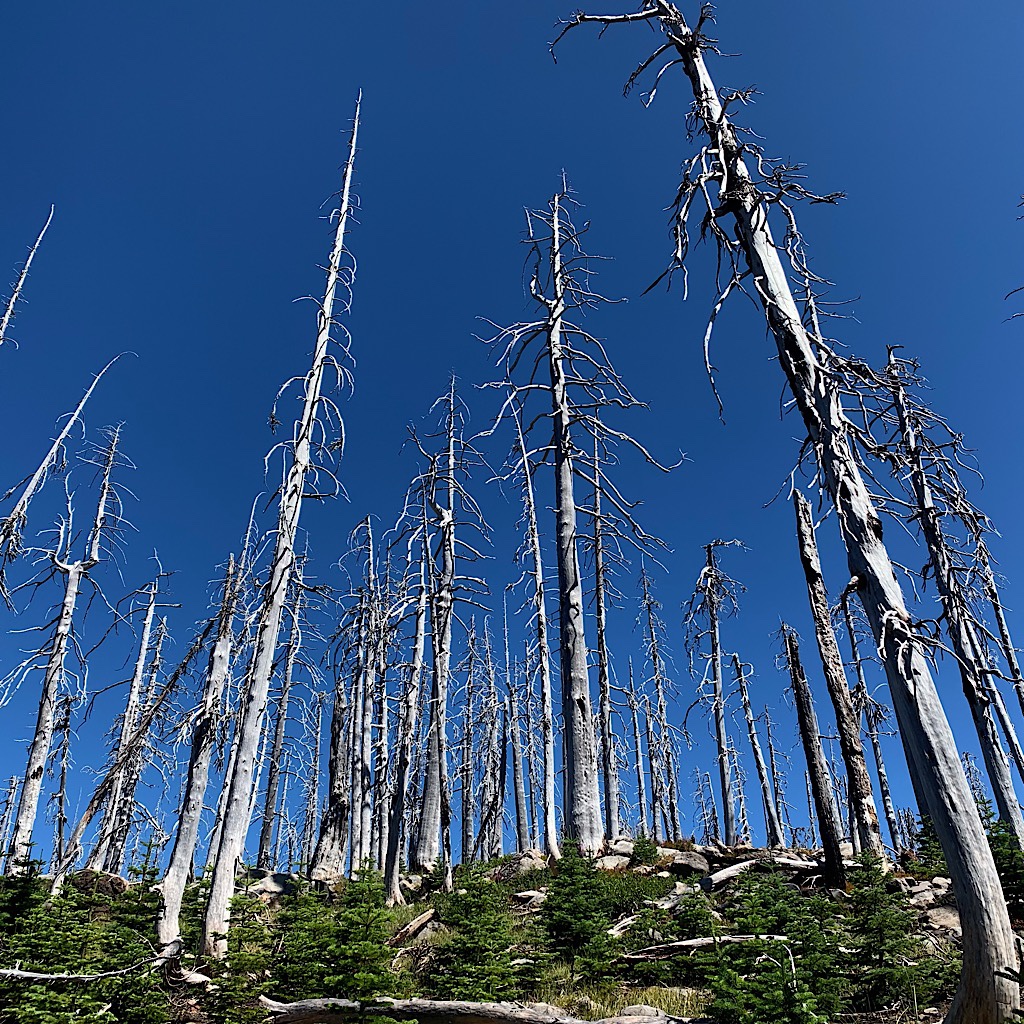 It’s nearly monochromatic except for a few bright green clumps of grass pushing through the ash. I take another pause sitting on a downed log. A section hiker approaches, also whistling. He tells me the next section is ugly and hot.

The sun is hot, but the overall temperature is mild in this burn area. It’s fairly recent and must have been a scorching fire. Only charred sticks remain, tall and fragile. Downed logs wear black lizard skin and disintegrate into tiny wood pieces, melting into the ground. Grass is pushing through, a black snake with yellow stripes down the entire length of its body slithers off the trail as I come closer, freezing so I can get a better look. Chipmunks and butterflies happily live in this graveyard.

The trail heads up and over a pass where hundreds of perfect Christmas trees grow in the opening, each with the ideal set of boughs at right angles for the maximum number of ornaments.

I can see the trail begin to go down back into shade and think about how hard a day this is, carrying food and water and feeling just a bit nervous about making it all the way to the stream. There are springs off trail, and a still pool one mile closer, but I have myself aimed for the creek.

I realize I complain a fair amount about other hikers – they’re loud, they’re entitled, they’re plugged in and tuned out – but today, I am glad they’re here. Sure, I have an SOS on my gps device, but to know hikers are behind me helps me feel safe. 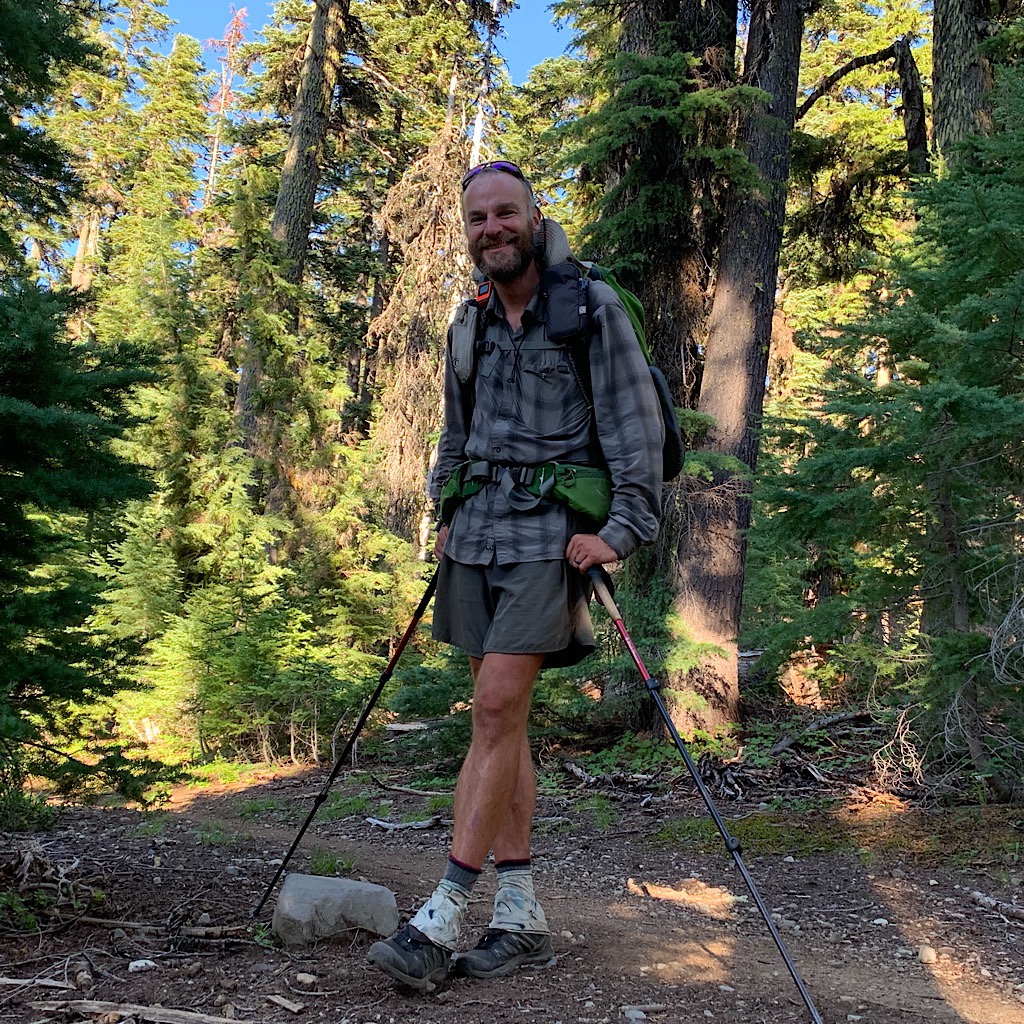 The trail dives deep into the forest, a ramp going on and on. There is no water here, but the mosquitos are out anyway. I reach a trail junction and edge closer to my stream. Now it’s up again and I drink the last of my water. Don’t worry; my pee rag gets a workout and I have this under control.

But with added weight, everything feels so much further. When I think I should be past the pools, I have yet to arrive. In time, I cross on downed logs and now it’s just one mile. Up and up, I hear the water before seeing it, claiming a single site just before.

It’s beautiful, gurgling and cold. I fill my bags and notice dozens of tiny frogs finding their way to the water. I try not to step on them, but it’s nearly impossible. As I set up, a Croatian hiker who made it through the Sierra stops in to talk. Zeljko calls himself ‘Bonus’ and gives me some good advice for how to resupply in Northern California – don’t, he says, just buy as you go. He also tells me to look for one special thing each day – a hiker after my own heart! – seemingly happy as can be in shady forest as on a mountain peak.

He heads north and I make dinner and crawl into the alicoop to rest up for tomorrow, not quite as long between water sources, but I’ll have to camel up and carry again.

I go to sleep proud of myself on what was not an easy day, but still filled with wondrous beauty. ‘Til tomorrow.