Every great dream begins with a dreamer. Remember, you have within you the strength, the patience and the passion to reach for the stars to change the world. – Harriet Tubman 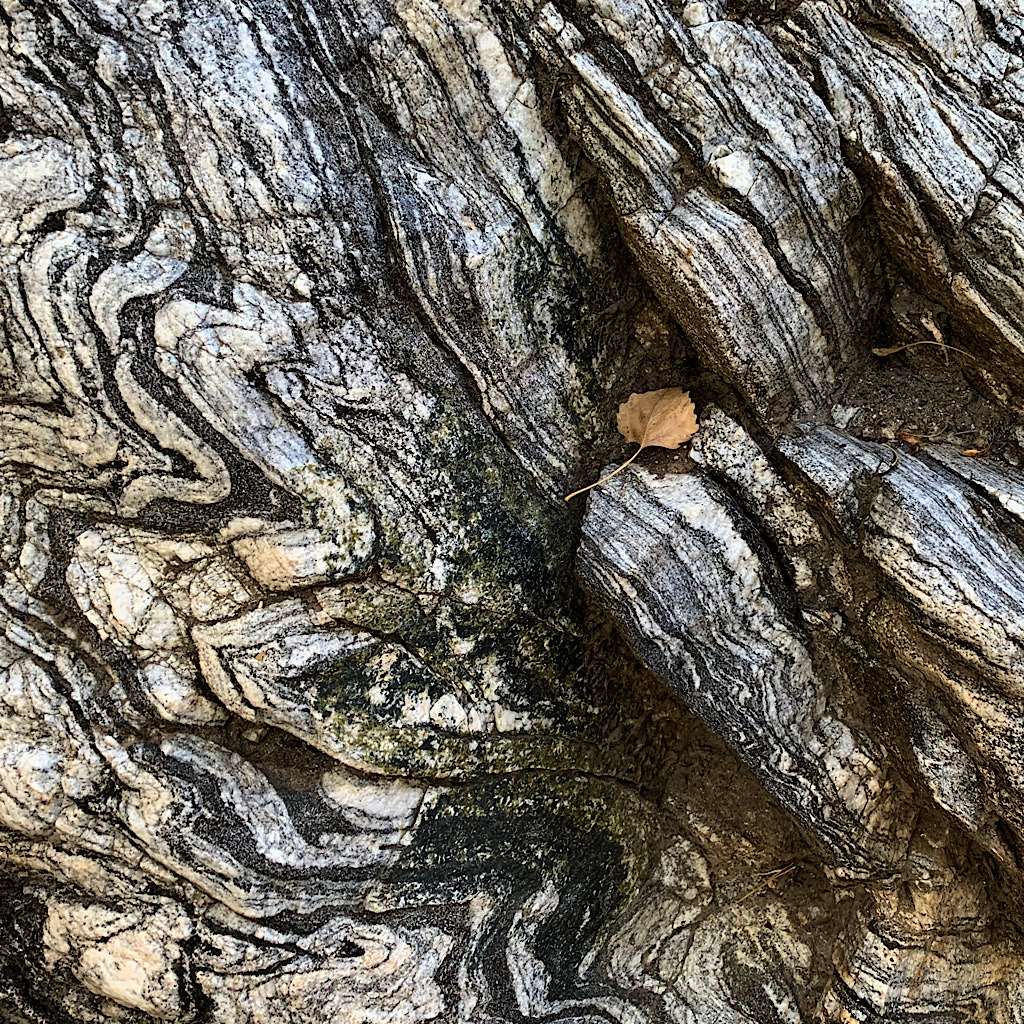 It’s cold. But that’s a good thing, right? Because we’re in the desert still and it makes for deep sleeping cuddled in Big Greenie wearing all the clothes I brought. Furthermore, it’s ideal hiking weather. A couple of hikers walk by us still wrapped in our bags drinking coffee their headlamps competing with the eastern sky’s orange glow. We lounge a while and take our time before packing up and setting off. Ted takes immediately – and absolutely naturally – to cowgirl camping and I think appreciates not having to pack his tent. This blissful ‘guide’ scores a win.

I look down from our perch on a canyon with seemingly no path or even an exit. Things begin on actual trail, though it’s an eroded dirt/fallen trees maze almost immediately. It reminds me a bit of Paria Canyon in Arizona as we pass a riparian zone of huge cottonwoods turning yellow, willow and a kind of maple, though I’m not certain it’s big three-fingered floppy leaves come from the same family. 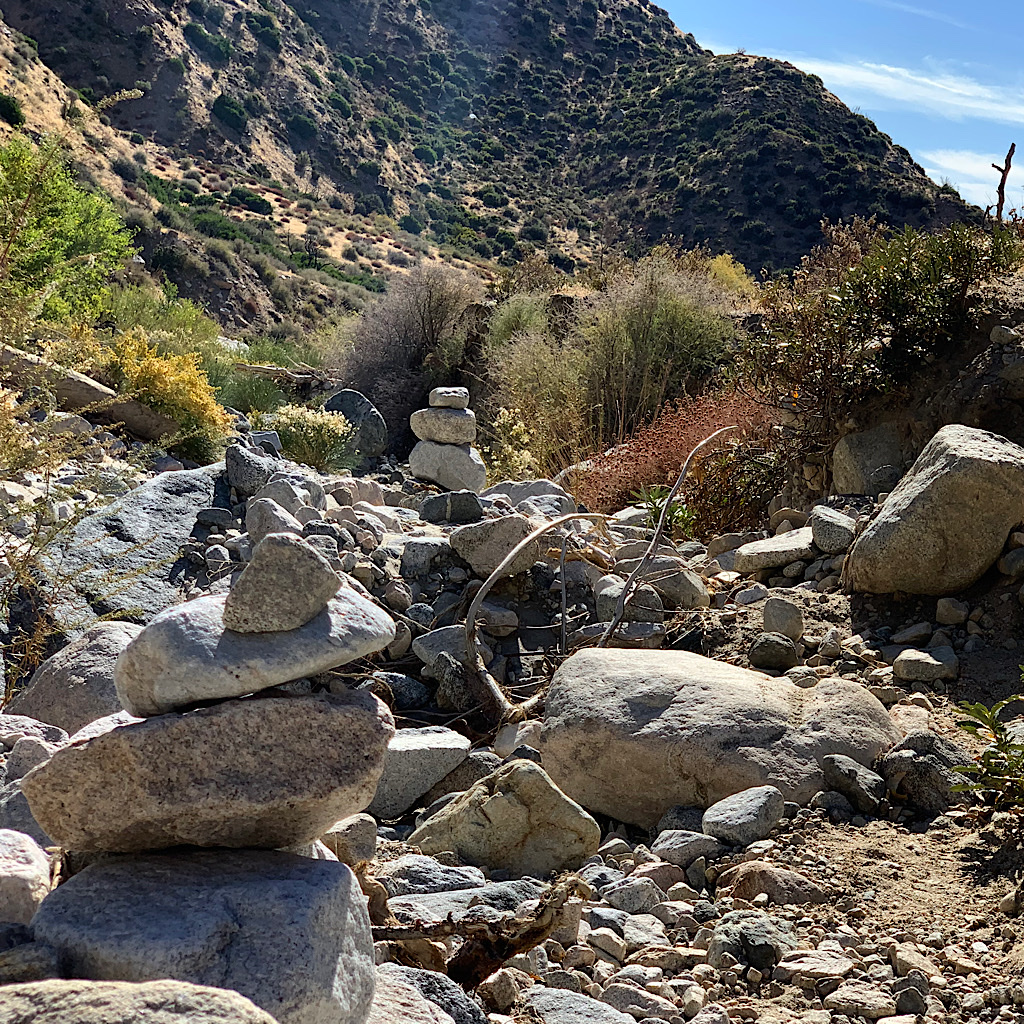 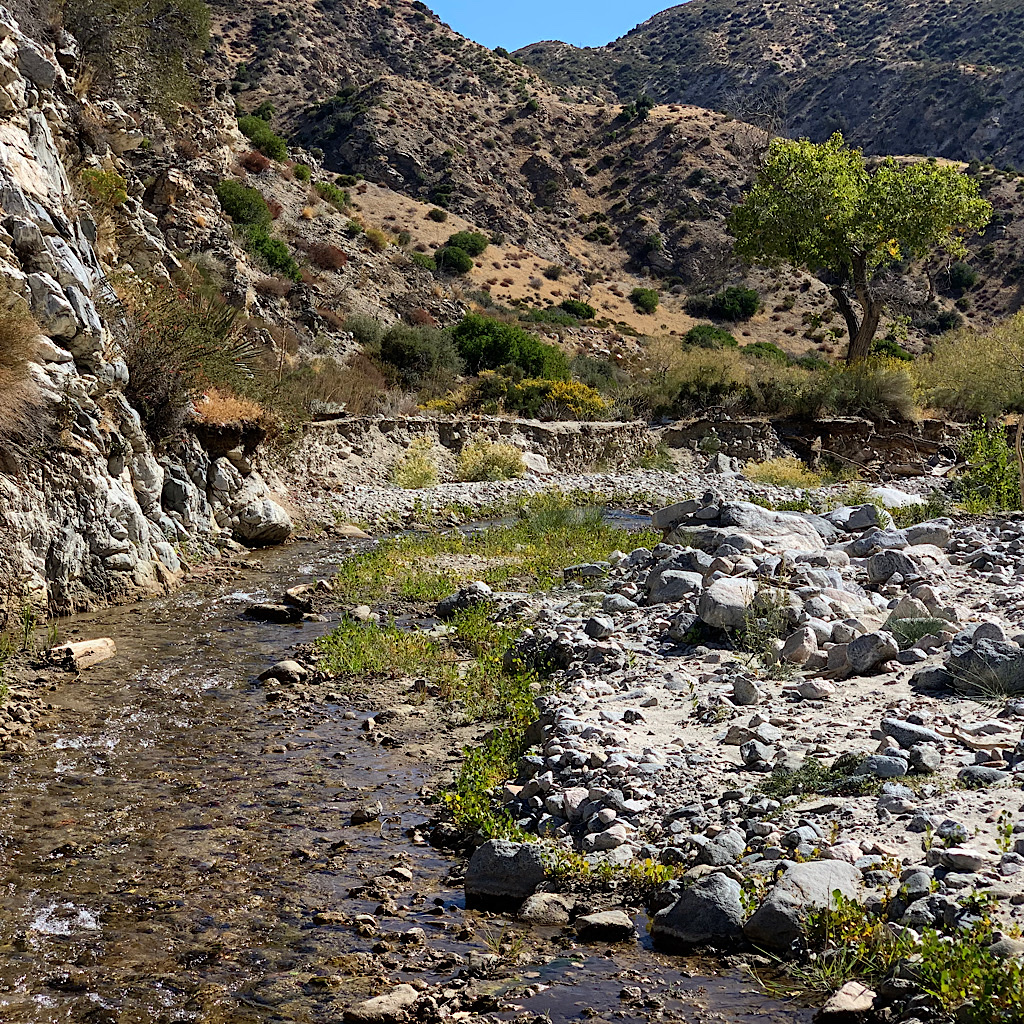 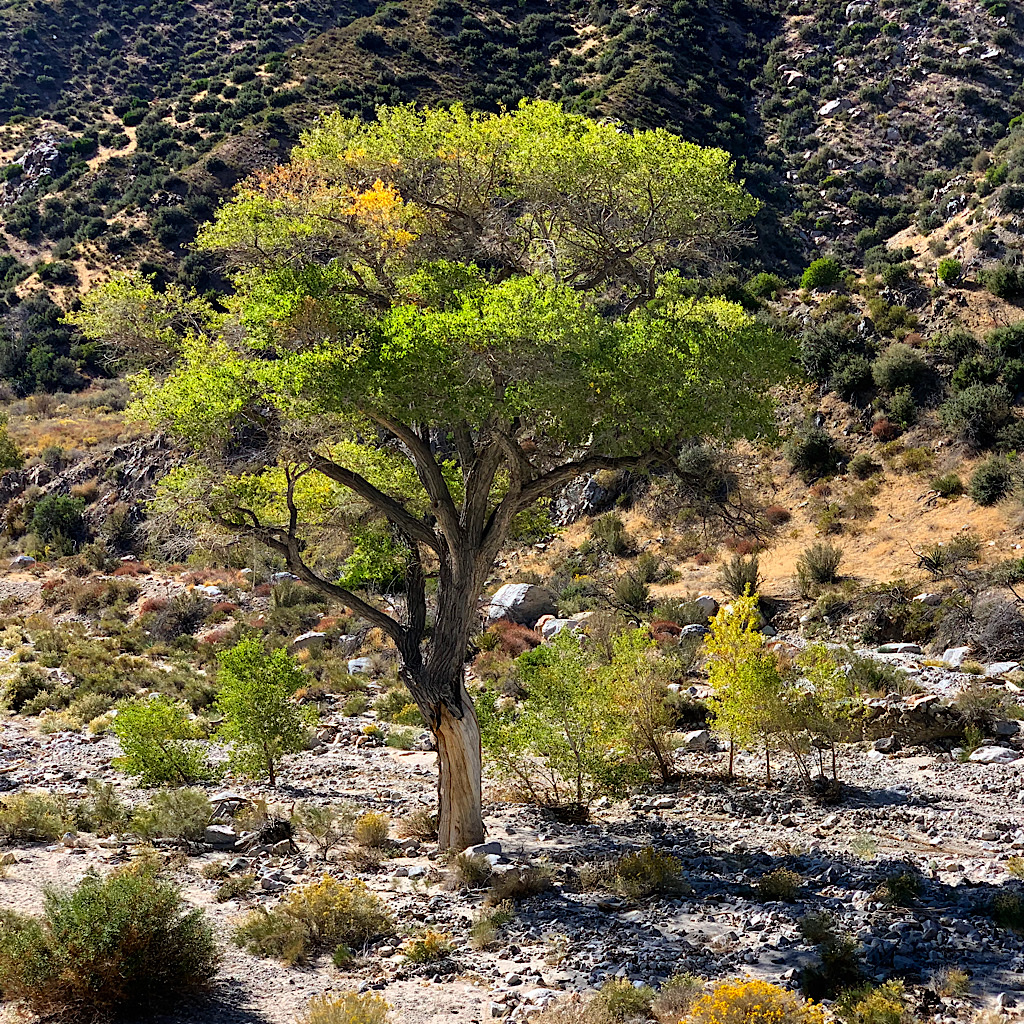 I’ve mentioned in my diary the map app I use called Guthook. It’s user-friendly and has most of the information I need like water sources and campsites without too much information that I don’t need and clutters. The only problem is the app is crowd-sourced with comments from hikers, which are oftentimes products of the Age of Twitter. When a hiker tells me water is flowing or a trail is closed it’s invaluable. What annoys me are the hikers who share their opinions like the guy who hated this section and complained on the app he wished he’d skipped it. He was such a whiner and it only served to make me curious what the big deal is.

The big deal, I discover, is that this section is a decent challenge. It’s – finally – some actual, honest-to-goodness tramping New Zealand-style instead of a giant ramp that only encourages the use of headphones and ‘bagging’ miles. That poor hiker finally had to think and strategize! I should point out here he complained of getting lost while hiking at night. It is so beautiful, why in the world would anyone hike in the dark? Admittedly the temperature today is lovely, so perhaps he was avoiding enervating heat, but I must say, this is one of the coolest sections of Southern California.

Mission Creek looks like Paria Canyon but tastes like the Te Araroa – on a good day. It’s fairly easy to walk and not the unmarked frustration I encountered in New Zealand. We cross the creek many times through overgrown willow and across wobbly rocks. Since the creek floods, it’s not always clear where to turn, though wooden posts high on the flood plain mark most of the crossings, and rock piled cairns pick up the slack. All day, I quote my friend Brenda from our hike on Minnesota’s Border Route filled with blowdown and overgrowth. She would call an actual trail walked with fill stride ‘100 feet of joy.’ Ted and I walk our hundred feet on the flood plains before a wooden pole which sends us down through a tangle of plant life and across the creek, often numerous times in a matter of meters to get past a tight, rocky squeeze. 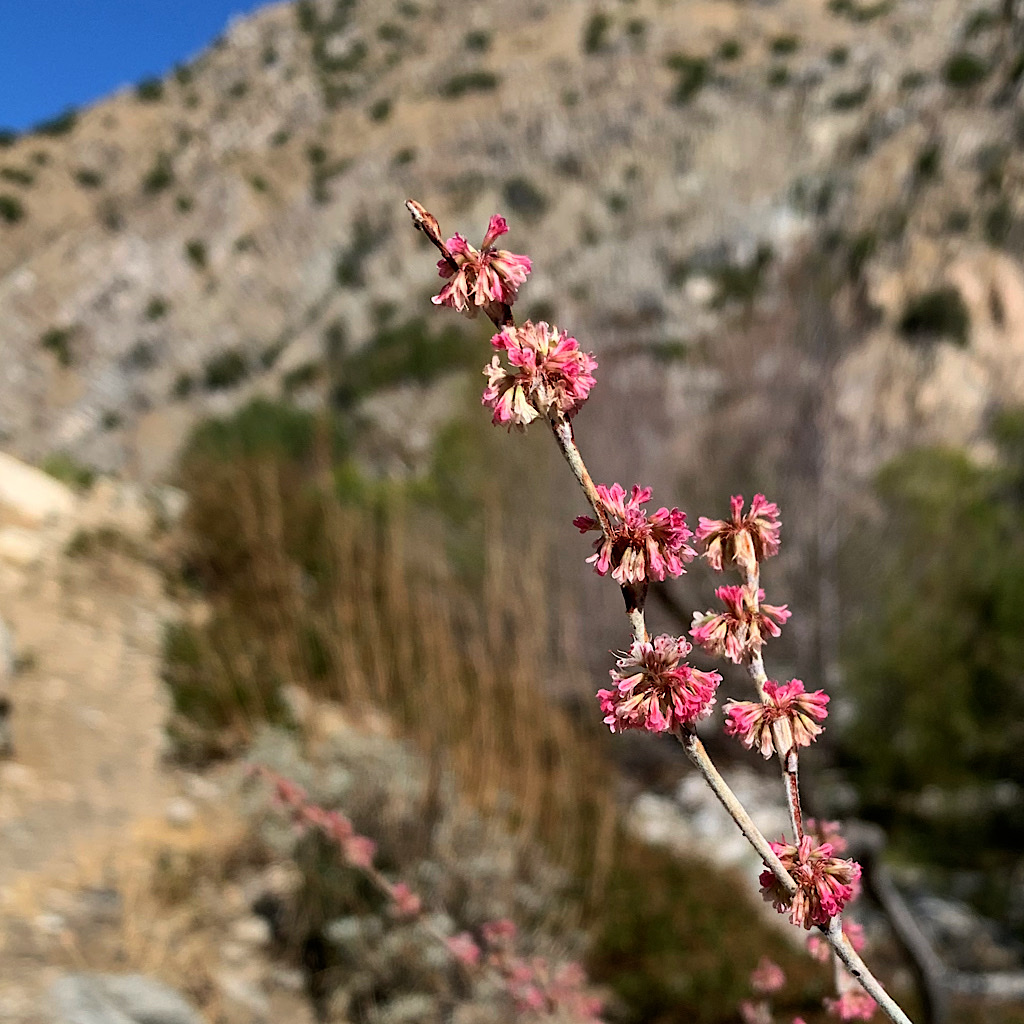 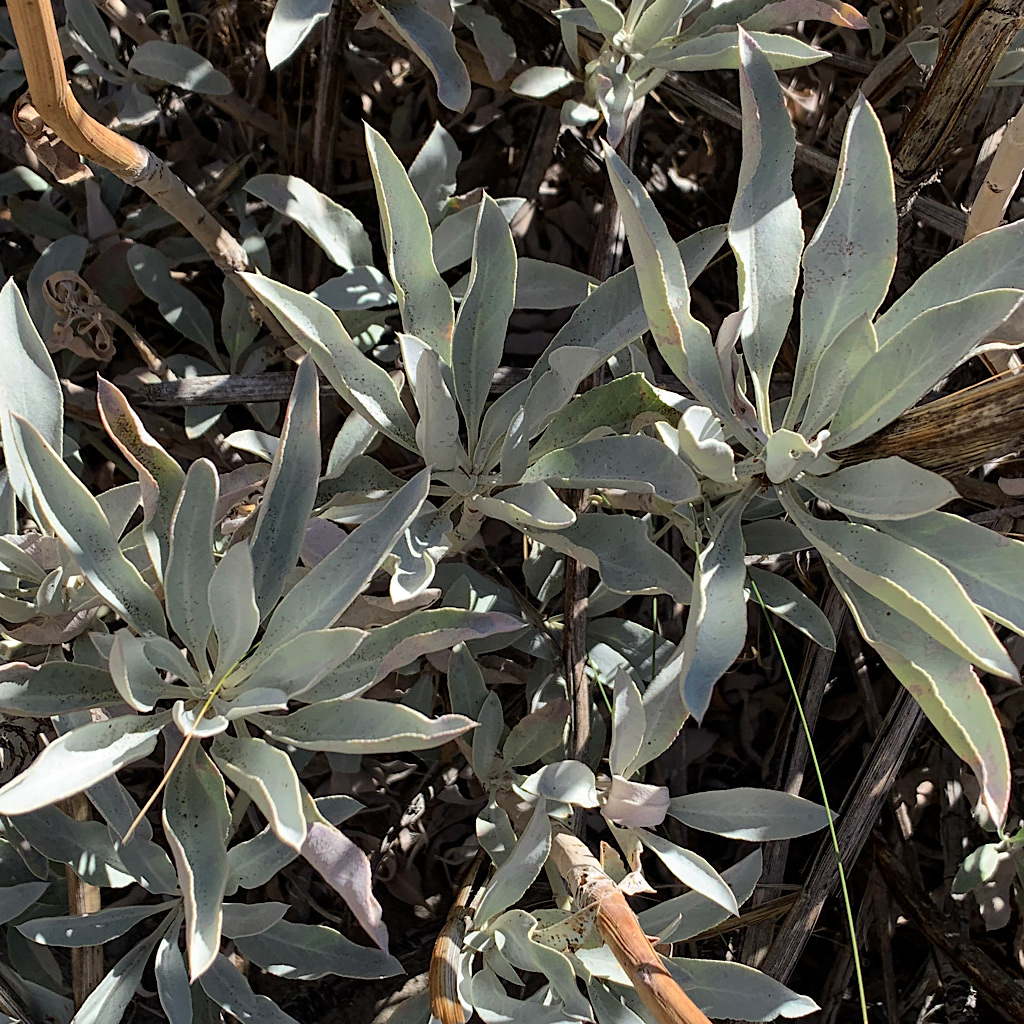 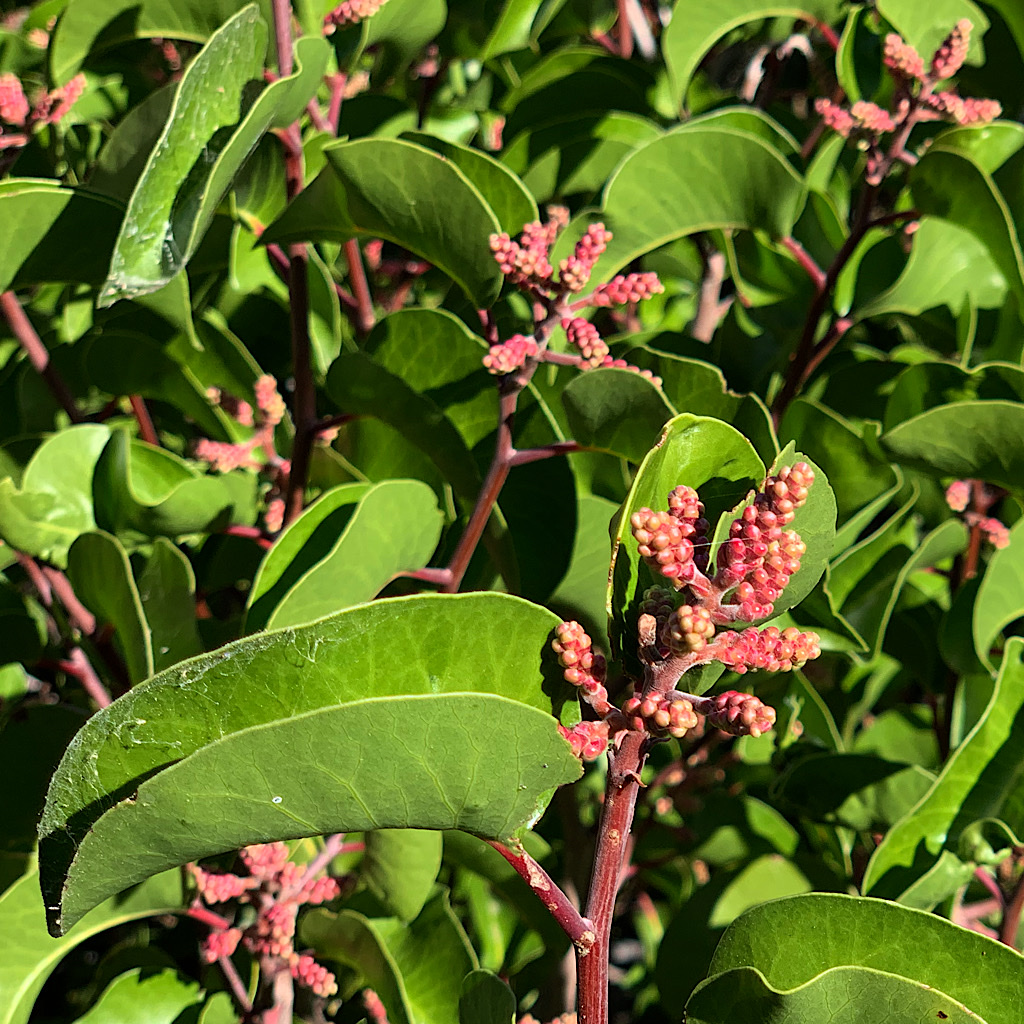 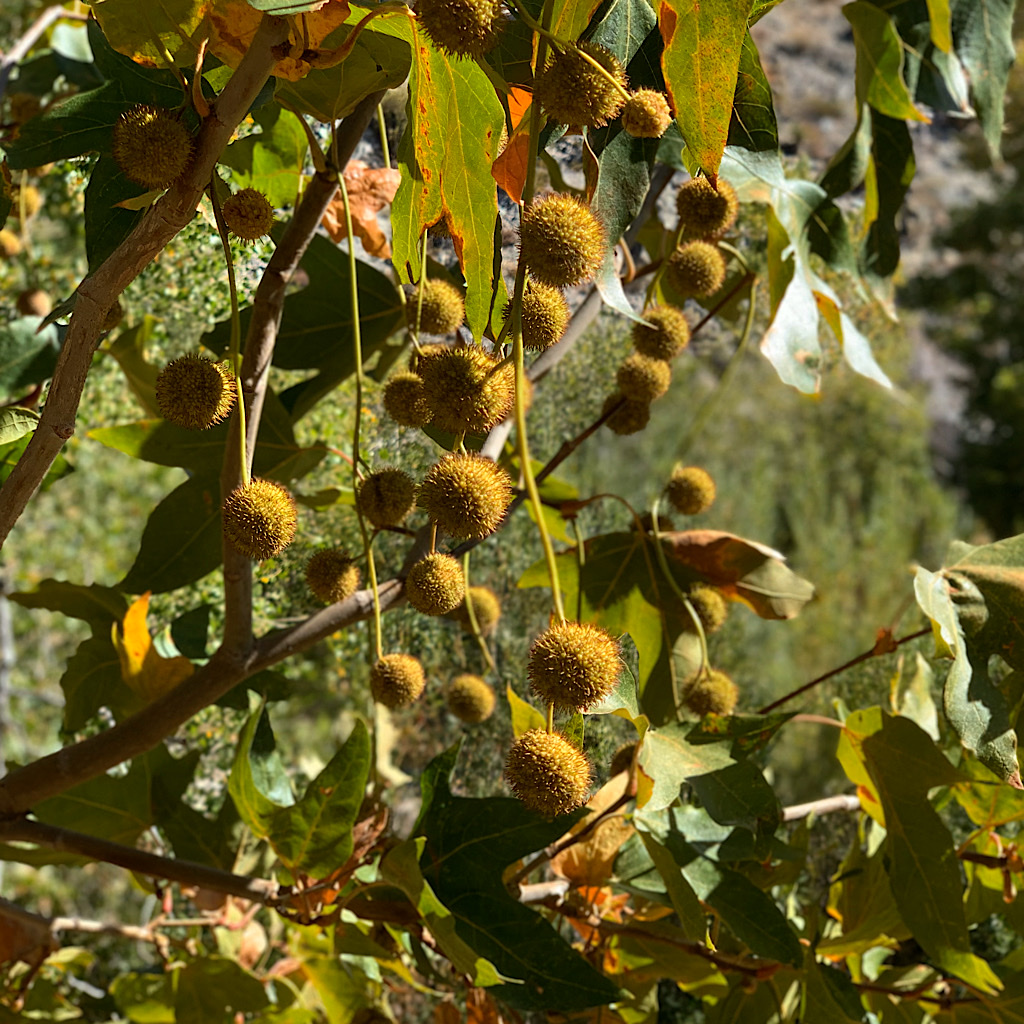 Do we get lost? Not so much, though we admittedly take a few wrong turns. Two people working together is better than one, but we love this part of the trail following the creek, up on the plain, then down in it trying to negotiate fallen trees, eroded banks, slippery log crossings, overgrown willows and paths that actually dead end into a pile of debris forcing us to backtrack. It helps that the wind is blowing and it’s cool, the cottonwood leaves quaking and the sun sparkling through yellow and orange.

I find the contrast of cactus with fifty foot trees astounding, the rushing water in desert a mystery, the solitude in this huge canyon that appears to throw up more twists and turns as we descend, a jungle gym. I feel so alive in here because I’m not simply marching miles but exploring.

We have lunch at a bend in the creek next to a cottonwood with a curved trunk in mid dance step. There’s one last cross before we leave this canyon, so I fill up a few bottles and add electrolytes. It’s a big pull up and over to another river that will be the final water source until the highway tomorrow. Ted feels nervous about getting there before dark and leaves his smaller bottle behind, but I run back for it and tell him just go steady and we’ll be fine. 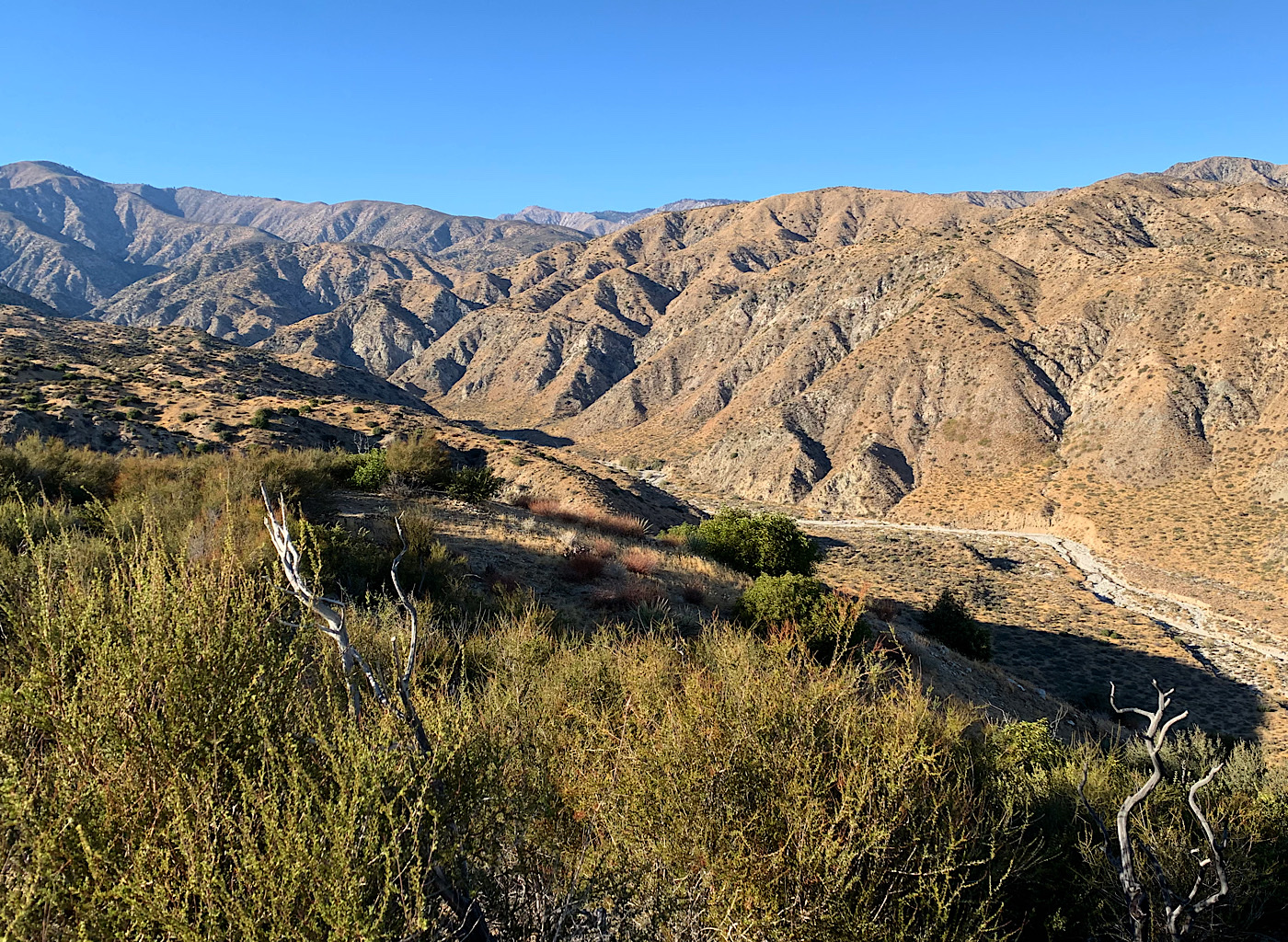 He cracks up that mountain like the ultramarathoner he is and we’re above our canyon in no time, its tiny ribbon trailing back into a jumble of mountains. Above on the ridge is splendid with a view out to the desert and civilization, plus windmills in a row. The mountains surround us on three sides, huge, imposing. The wind whips at us, rattling our hats. Sun lights up the seams on mountains like wrinkled fabric. I feel powerful up here right on the edge. I can see the rocky bed of Whitewater River in the distance, but we first descend deep into another canyon. Water runs here at some point, but it’s completely dry now.

We need to climb over one more ridge before descending through a jumble of eroded cliffs looking like the badlands. The only official campsite is further on from the water and inconvenient for cooking tonight and in the morning, plus carrying for the ten miles to the road. So I look around for a place to set near the water. We pass a few possibilities, but they’re a bit far away. As we get closer, the river bed reveals many flat spots in sand. Ted is reluctant to stay since sand gets into everything and his tent pegs won’t stay in, but then suggests cowgirling it. My answer, “Absolutely!” I filter water from the rushing river and we set a spot looking up at this bowl of mountains, a crescent moon and the sky turning pink. Dinner goes fast and I type under a sky filled with stars.

I was not certain I wanted or needed someone to hike the final miles of this epic journey with me, but Ted has proven a strong and eager partner, and I think today was better overall because it was shared. We are walking fewer miles, but these are still big days and tremendously fulfilling. As I scout this camp spot, I saw animal tracks, most likely a coyote, but maybe a lion, who knows?! Having a friend around, I think, is probably not such a bad idea at all. 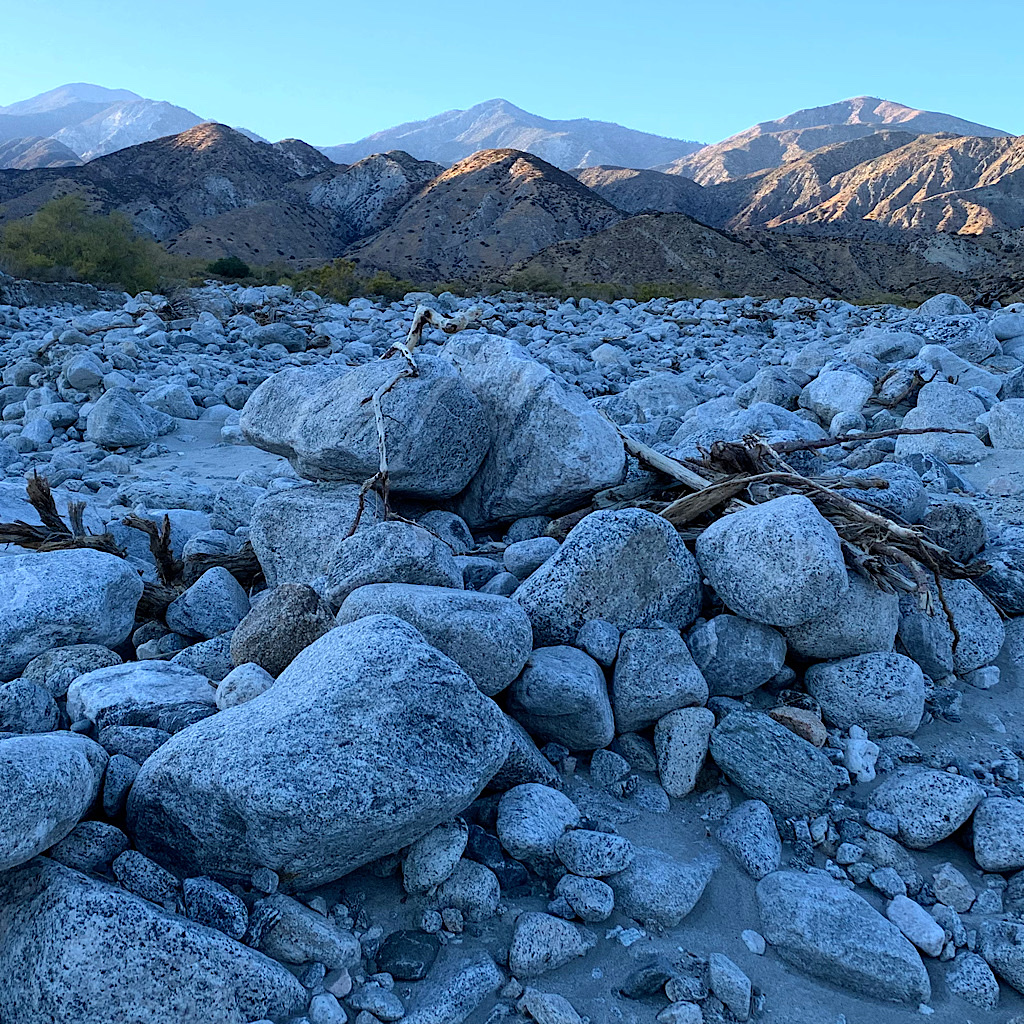 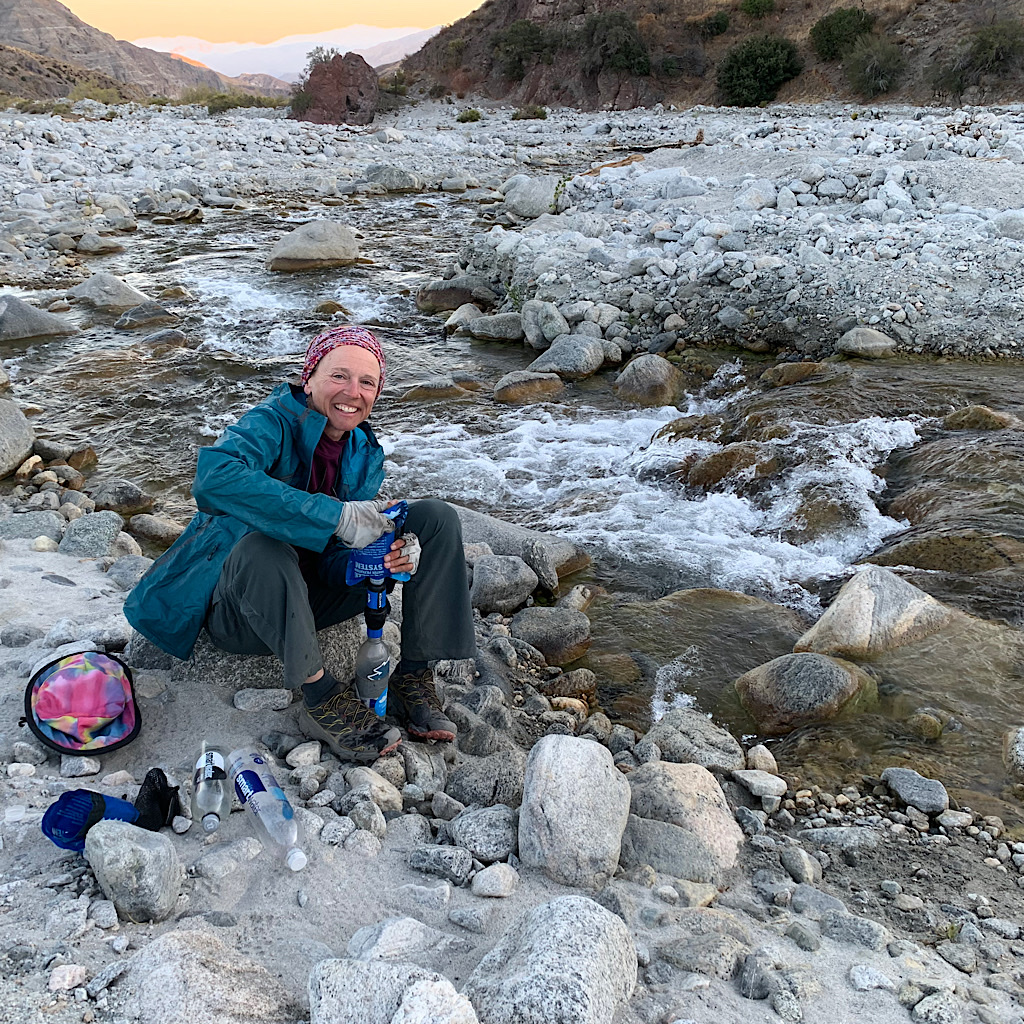