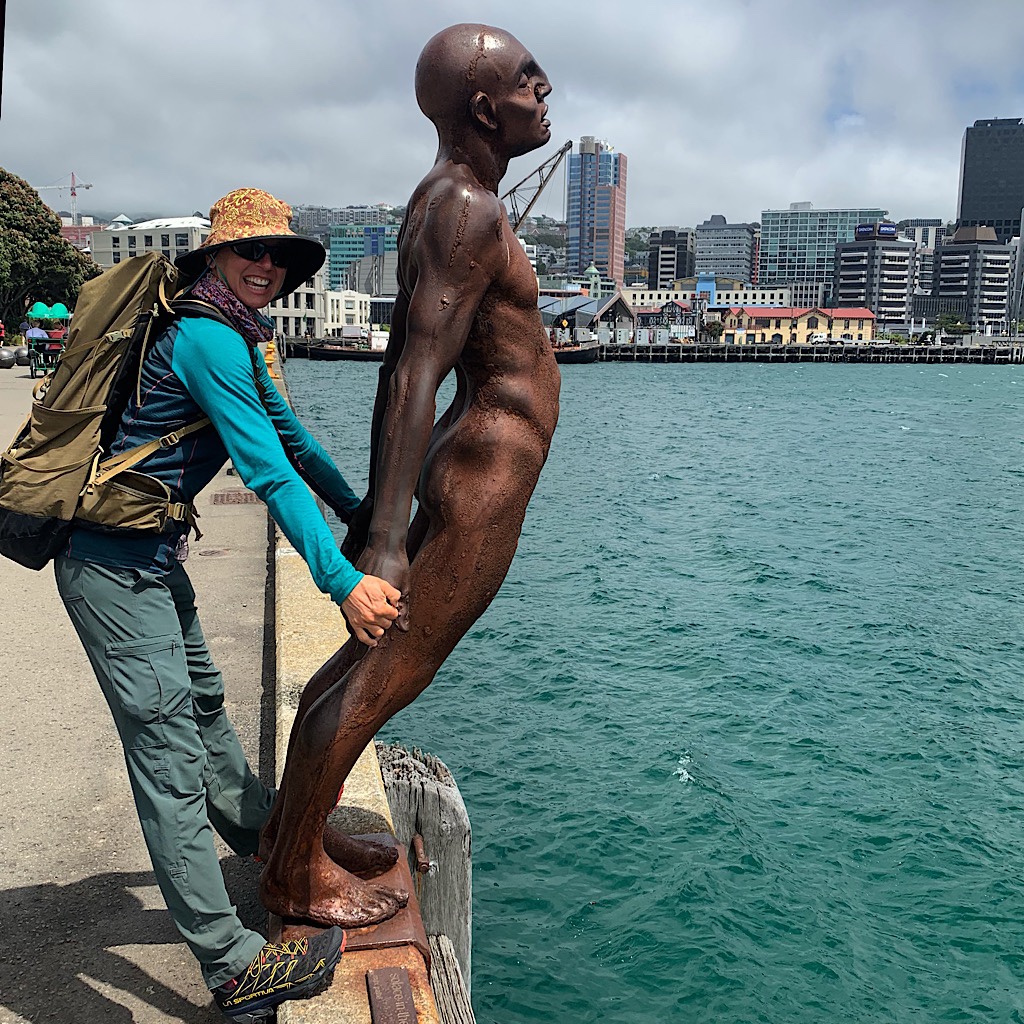 Things begin a bit lazy on another unusually sunny, warm day in Wellington with waffles and delicious yogurt, golden kiwis and blueberries before we all head to the market and buy a cart load of groceries for the three separate packages of resupply I have to send to manage the first month of hiking on the South Island.

We cram tuna packets, ramen noodles, muesli bars, dehydrated soup, salami, lollies, and more into boxex, our fingers crossed they arrive when and where I need them. All this while trying to ignore my annoyance with the TA association for failing to make vital information like addresses and protocol for resupply easily available, while at the same time the TA facebook page administrator scolds when we don’t get it right. <sigh> 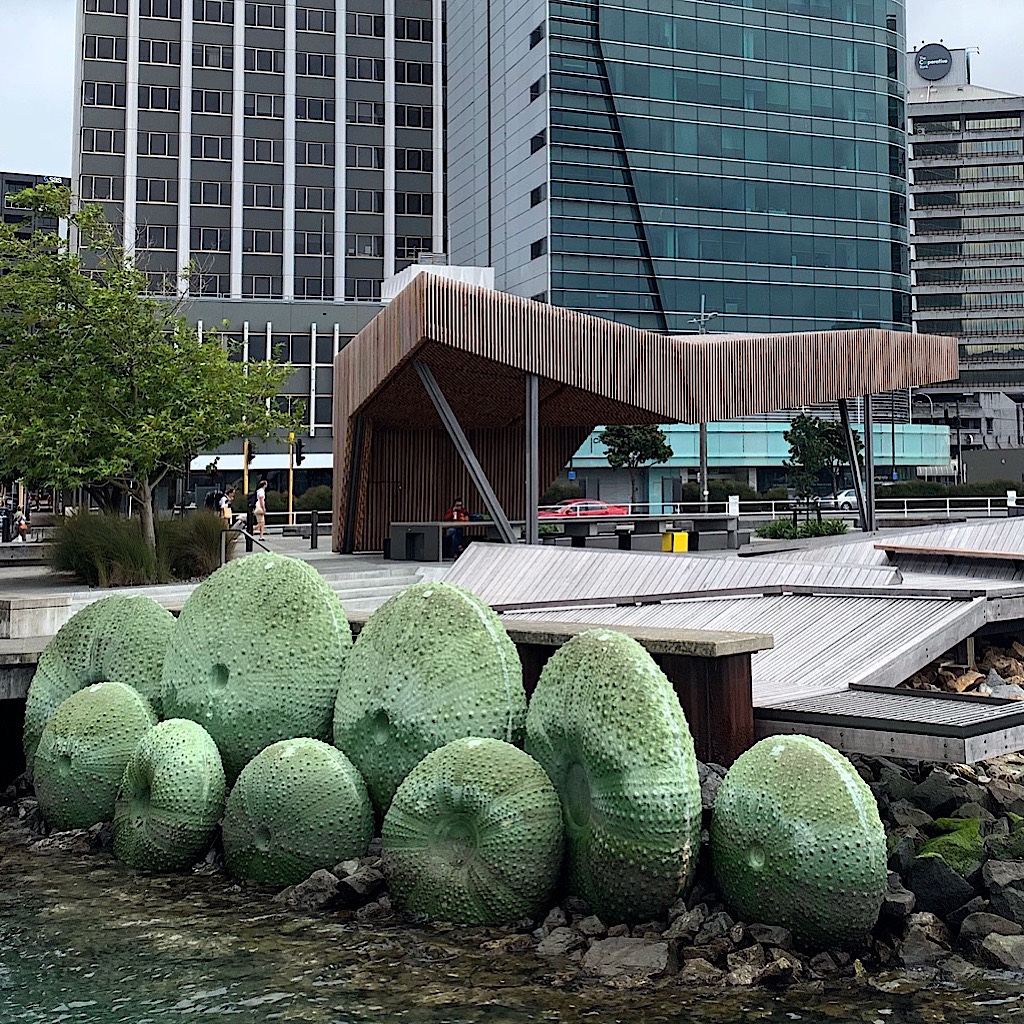 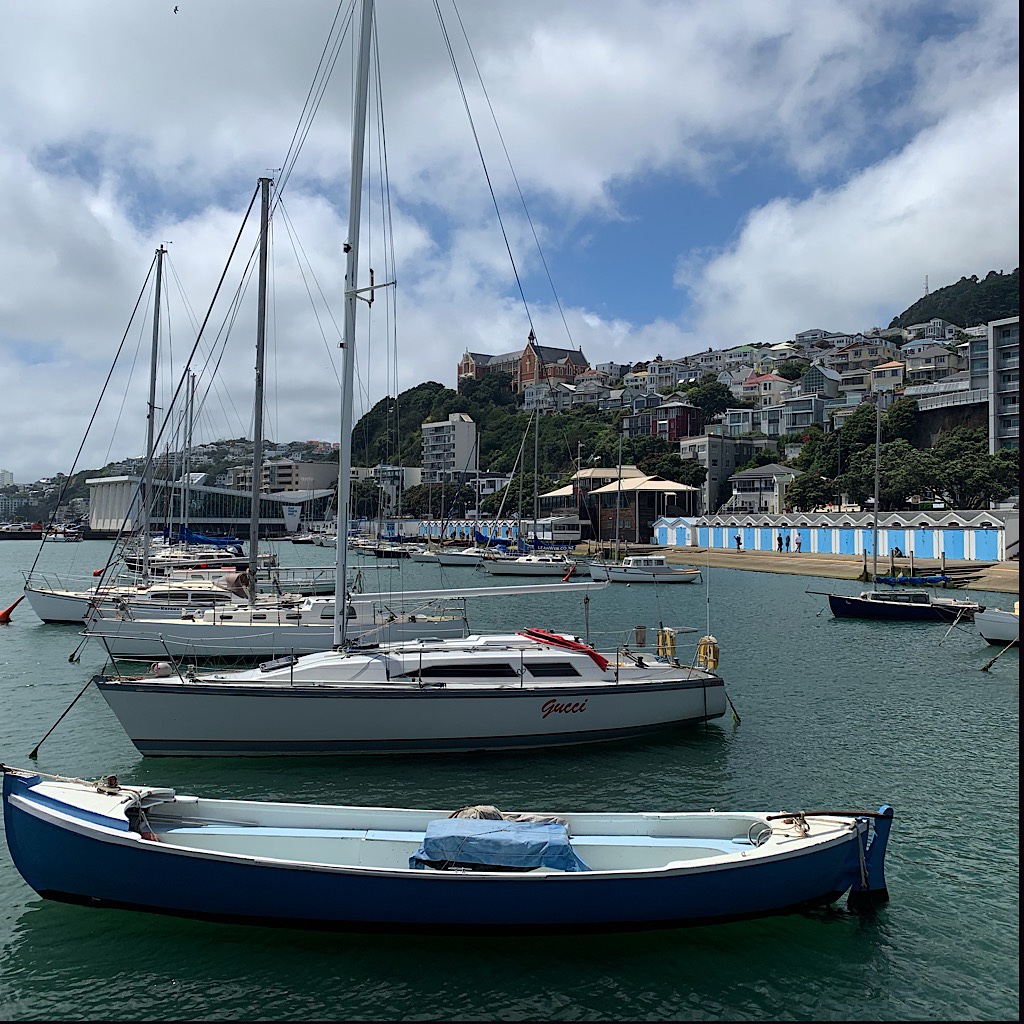 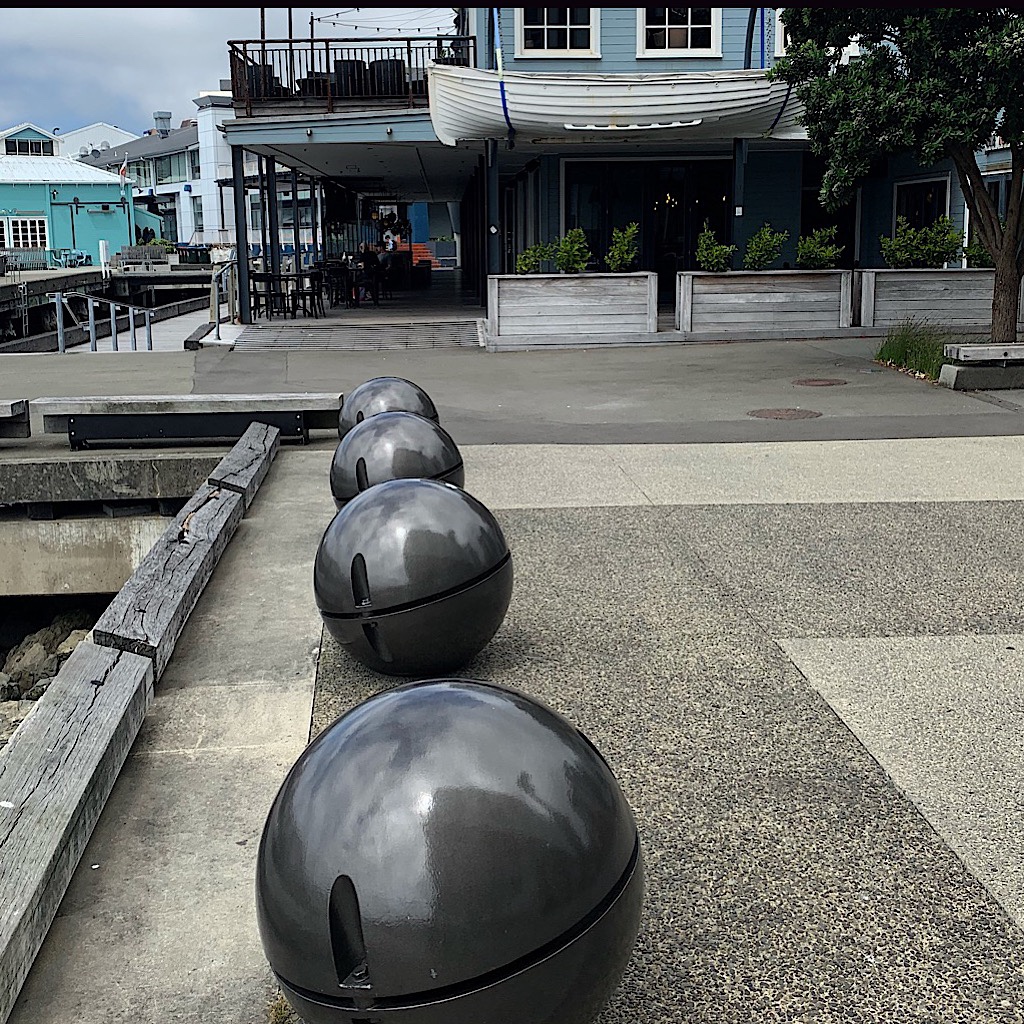 Then I suit up in ‘the outfit’ and Rafe joins me for the final kilometers of the north island. I checked off the botanical gardens yesterday, so we head right to the waterfront, passing parliament and the ‘bee hive’ where I run into Alexis, looking well and rested after a week off.

The water glows azure and so many are out walking amongst public art, a street musician plays ‘Girl from Ipanema’ and vendors sell goods made of possum fur. I skip Te Papa, the grand museum, vowing to return one day, but this day I’m enjoying so much being with friends.

The wind is high – normal for this city – and it kicks up white caps, not large, but so numerous it looks like frothy white frosting.

I mention to Rafe that a friend of a friend lives at the end of the trail and might welcome me. He tenses as I tell him how surprised I am she is situated right at this juncture. He then tells me he has profound social anxiety and doesn’t manage well when situations are sprung on him suddenly.

I feel so bad, not intending at all to make him uncomfortable. I had no idea, though I did notice both of them are home bodies, but not shy in the least as we talk non-stop. He seems to be comfortable with himself, though, accepting that this is just who he is. There are no hard feelings and I genuinely like Raf, he’s interesting and easy to talk to. To be honest, hanging at their loft, organizing for the south island has been so relaxing, as though we’ve known each other for years.

I don’t suffer from social anxiety, though I’ve felt rejection and had my feelings hurt – even on this hike. Even so, I go back for more, friendly and a little naive sometimes. We talk a bit about introverts and extroverts and I think more about how this trail has led to some incredibly lovely introductions, friends I’ll keep for life, while also, maybe not so much disappointing but confusing me as far as bonding with hikers. My brother sent me an article about women making friends after 50 and much of it resonated, especially when it comes to acceptance of who I am. Most of the hikers are much younger and still finding their way. My life – career, husband, home – are in place. I guess that doesn’t mean I won’t grow and change, but I’m in a different stage than many, and we can’t always relate. 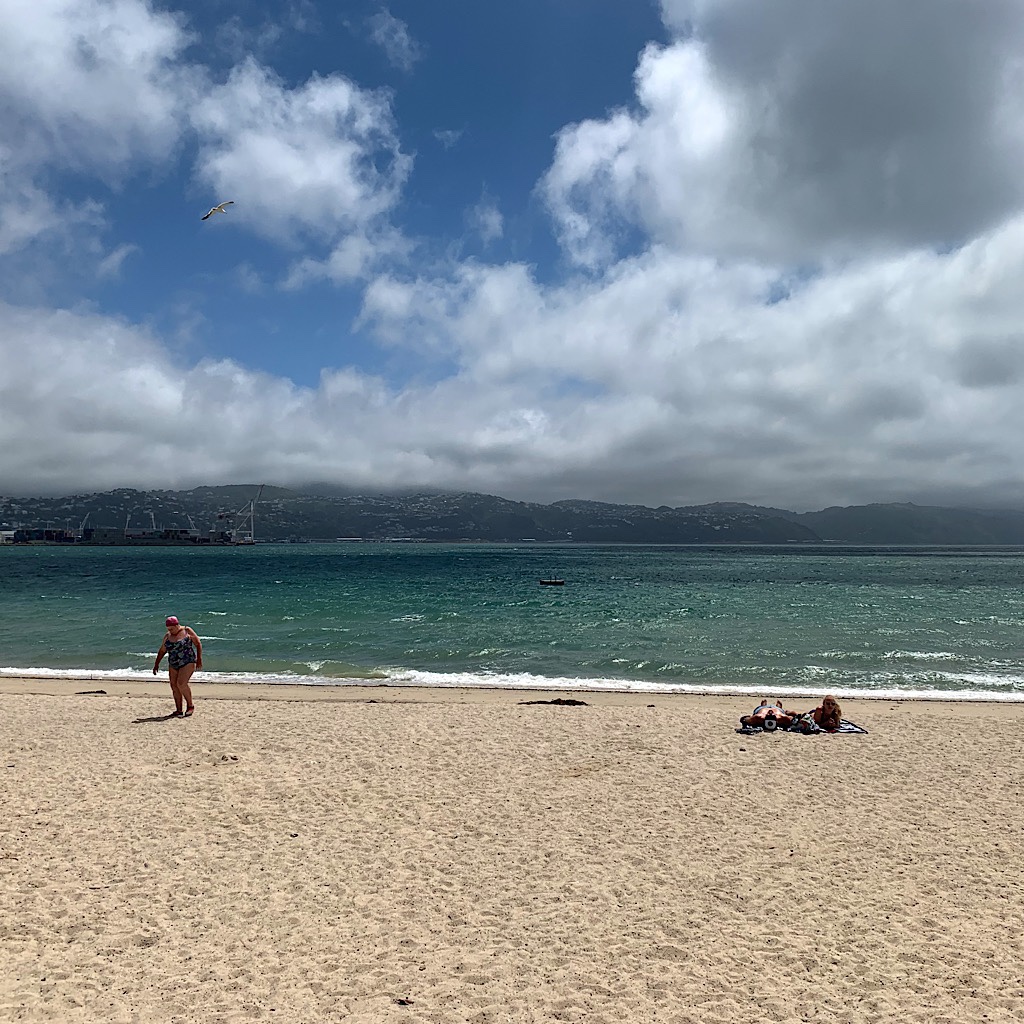 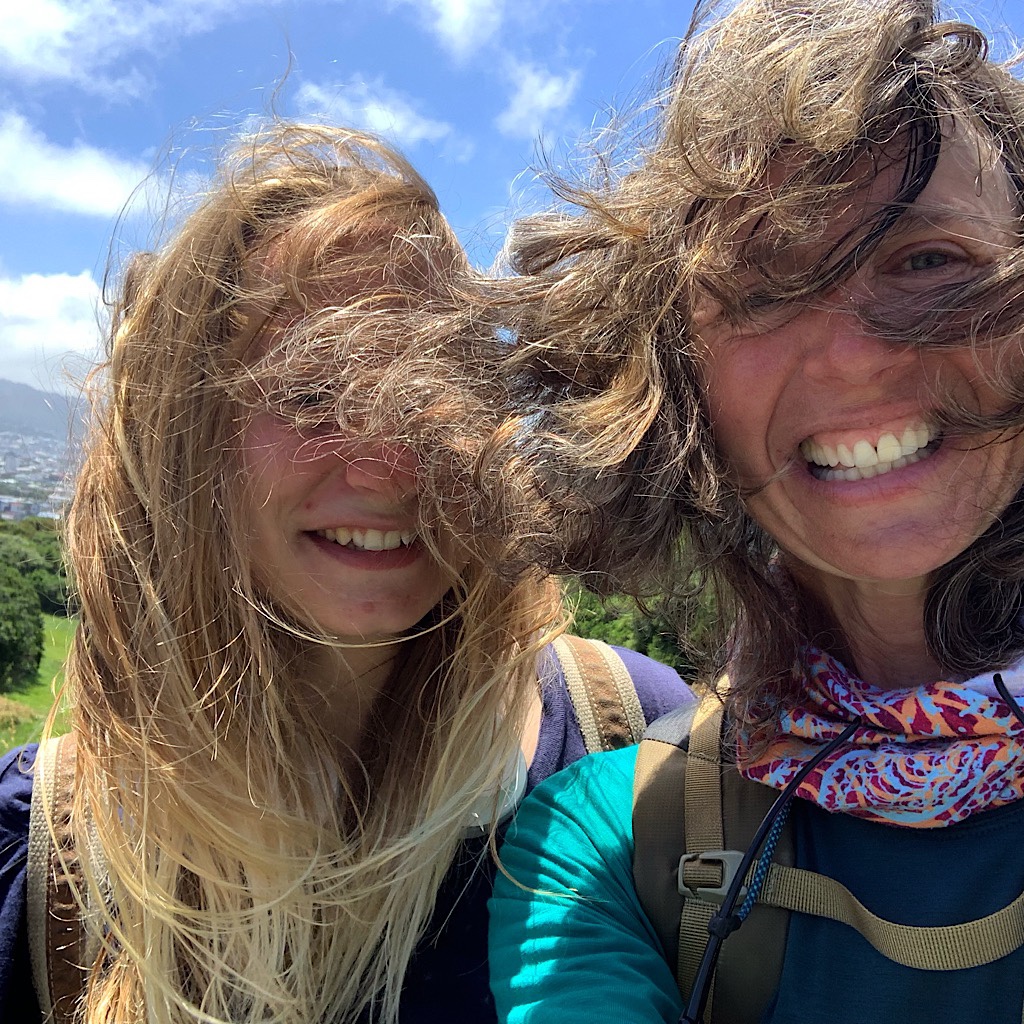 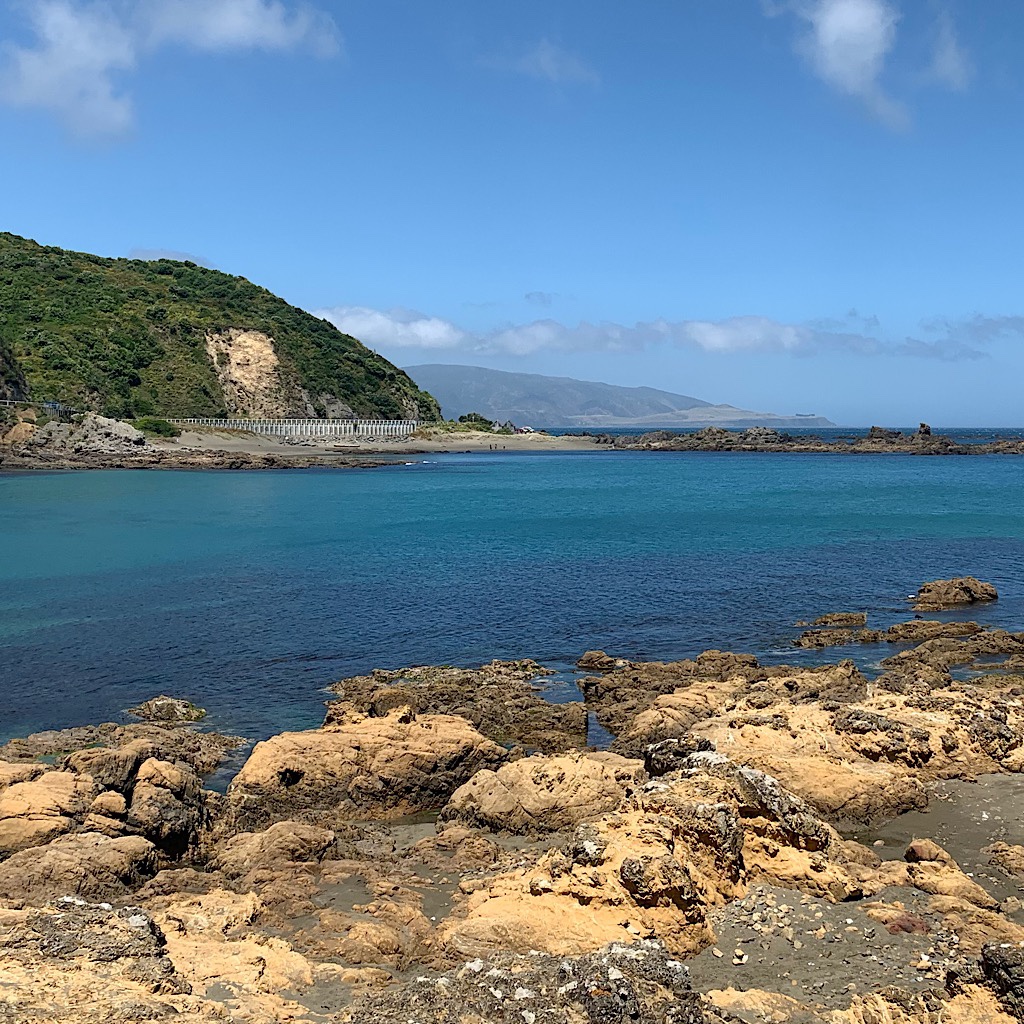 As we climb up the hill to Mt. Victoria, Raf peels off feeling not quite in shape. I power on up and catch the stunning view for the second time before working my way down this fantastic urban trail towards Mt. Albert, beautiful homes clinging to the surrounding hills. Just as I cross the street I run into Lydie! She’s the lovely young French woman who saved a beer for me after a hot hike in Northland. So happy to see her and I laugh immediately having become so maudlin and questioning about friendships. She and I clicked right into an easy companionship regardless of the years that separated us. It was a respect and affection that I loved so much til we parted before Auckland. Sadly, she injured herself and will just enjoy New Zealand in small chunks, and likely stay on to work eventually.

I say goodbye and head down to the trail’s end on the south coast at Island Bay, swimmers and divers enjoying the relaxed surf, music cranked. I find the plaque marking the southern terminus – 1620 km down, 1430 to go – at Shorland park and share high fives and pictures with a local.

Then I work my way a bit further down the coast to a bistro and meet a friend of a friend named Kedron who is also a musician, producer and artist from the US. We talk up a storm about living here and making public art, how New Zealand is ripe for the next great idea, and the rich variety of world music. She puts herself forward to be my producer should I return to perform. Always good to know people just in case. 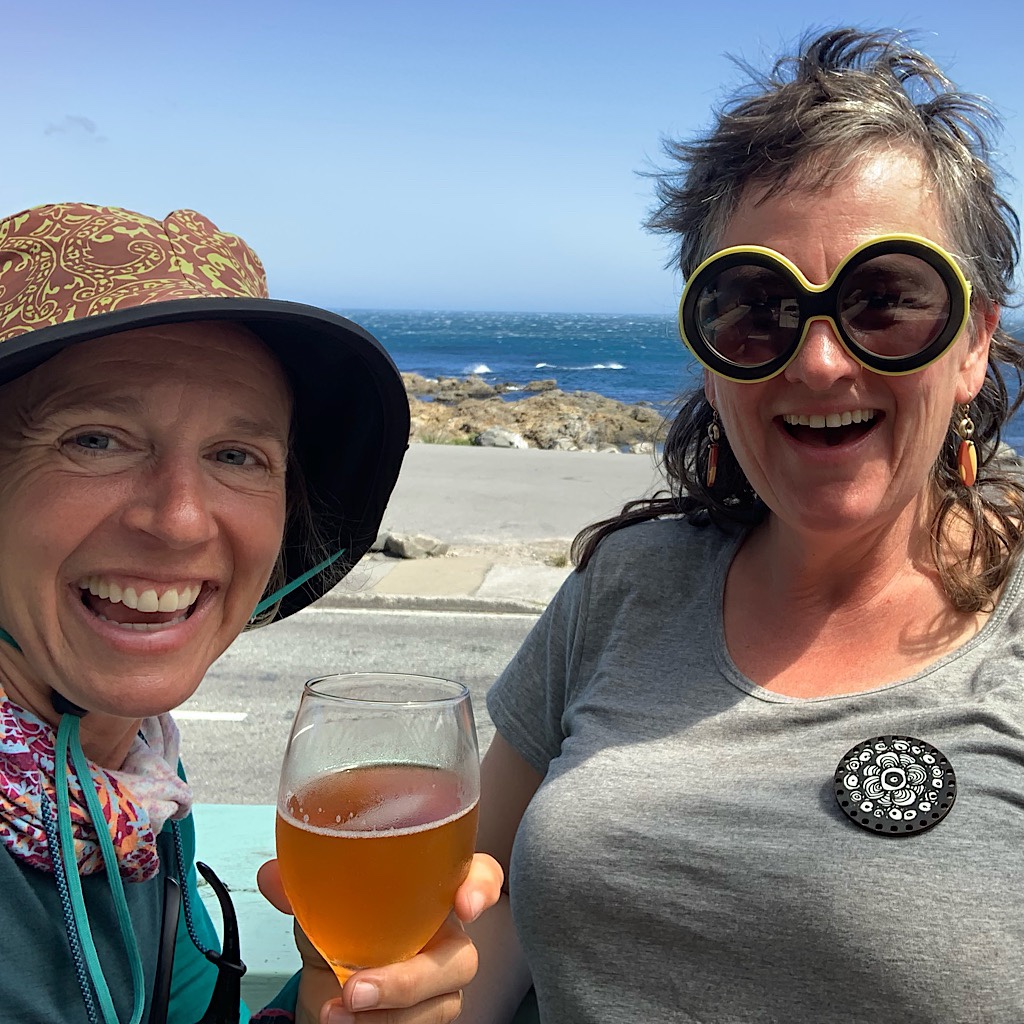 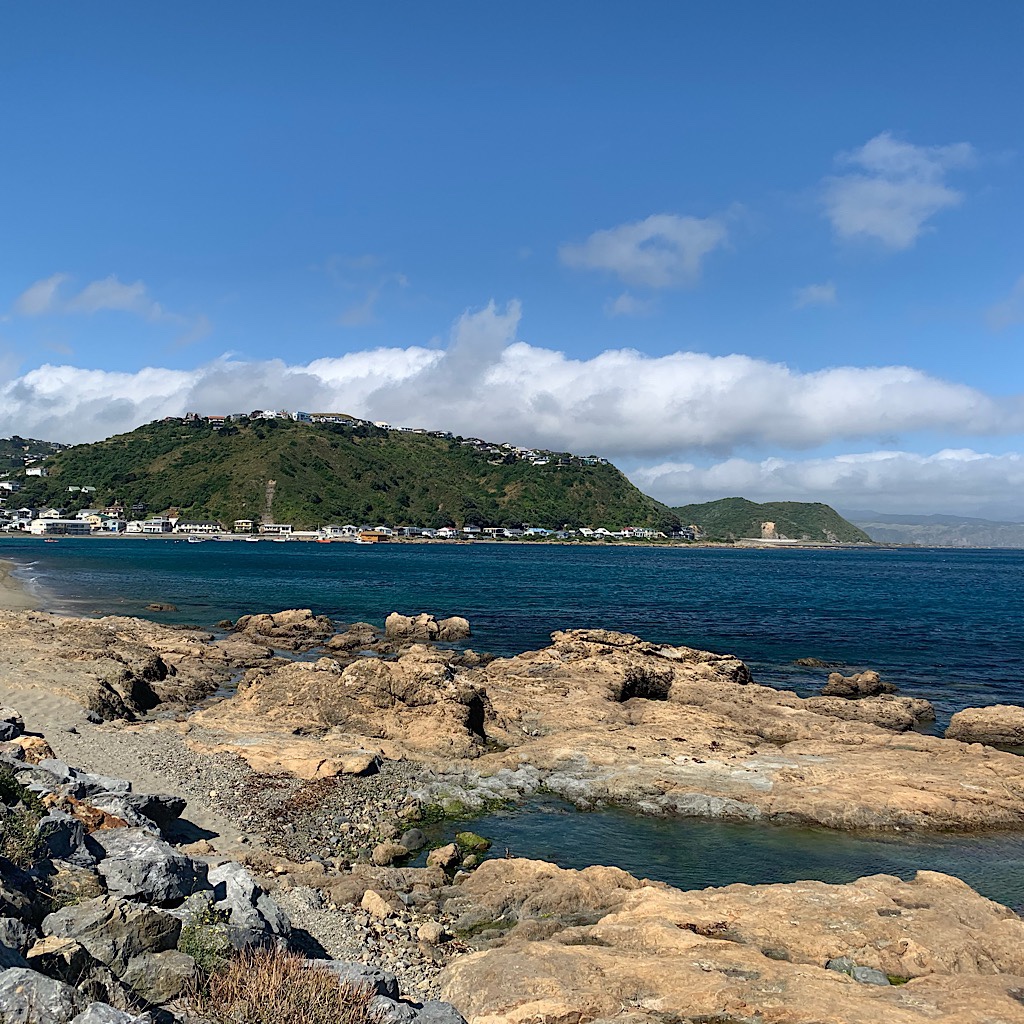 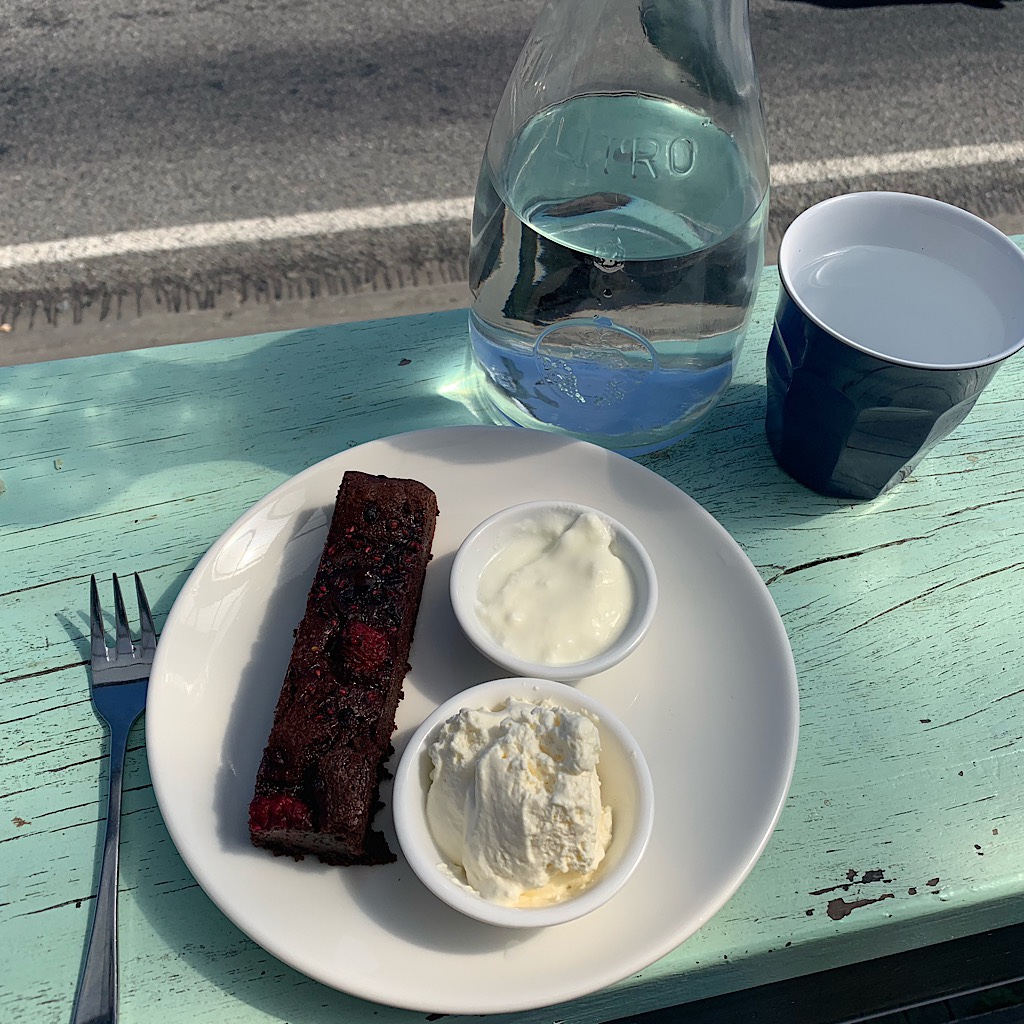 We say goodbye and I take a look in the tide pools before catching bus number 1 back to Thorndon, nearly getting blown over when I walk across the bridge over the highway.

Dinner is served practically as I walk in the door and we talk about social issues, ethical eating, and the political bias of journalists before relaxing on the couches and reading, the wind rattling the house.

A fine visit to this wonderful city, and plenty to see when I return like the museums and performing arts, the national archives and Zealandia. But this visit was to regain my balance and make some deep connections. I am so happy I was able to do just that. 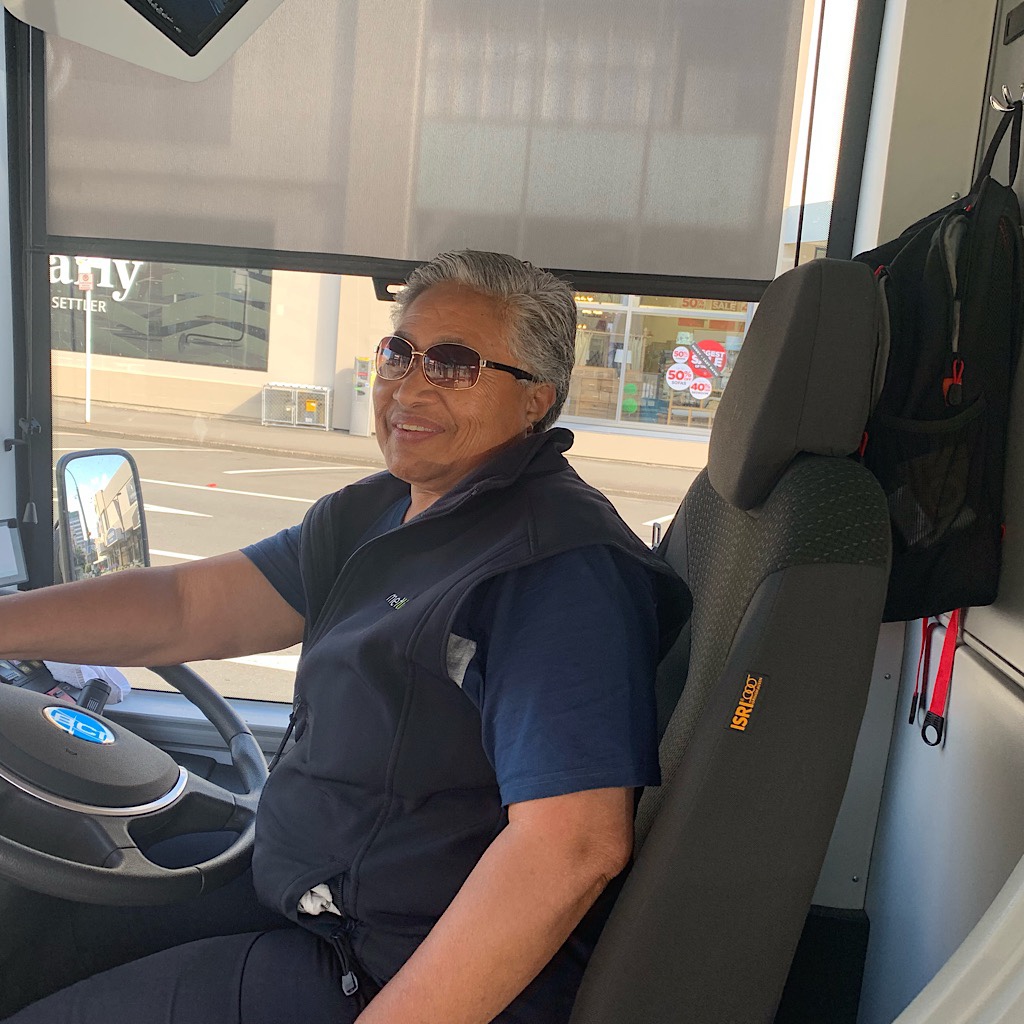 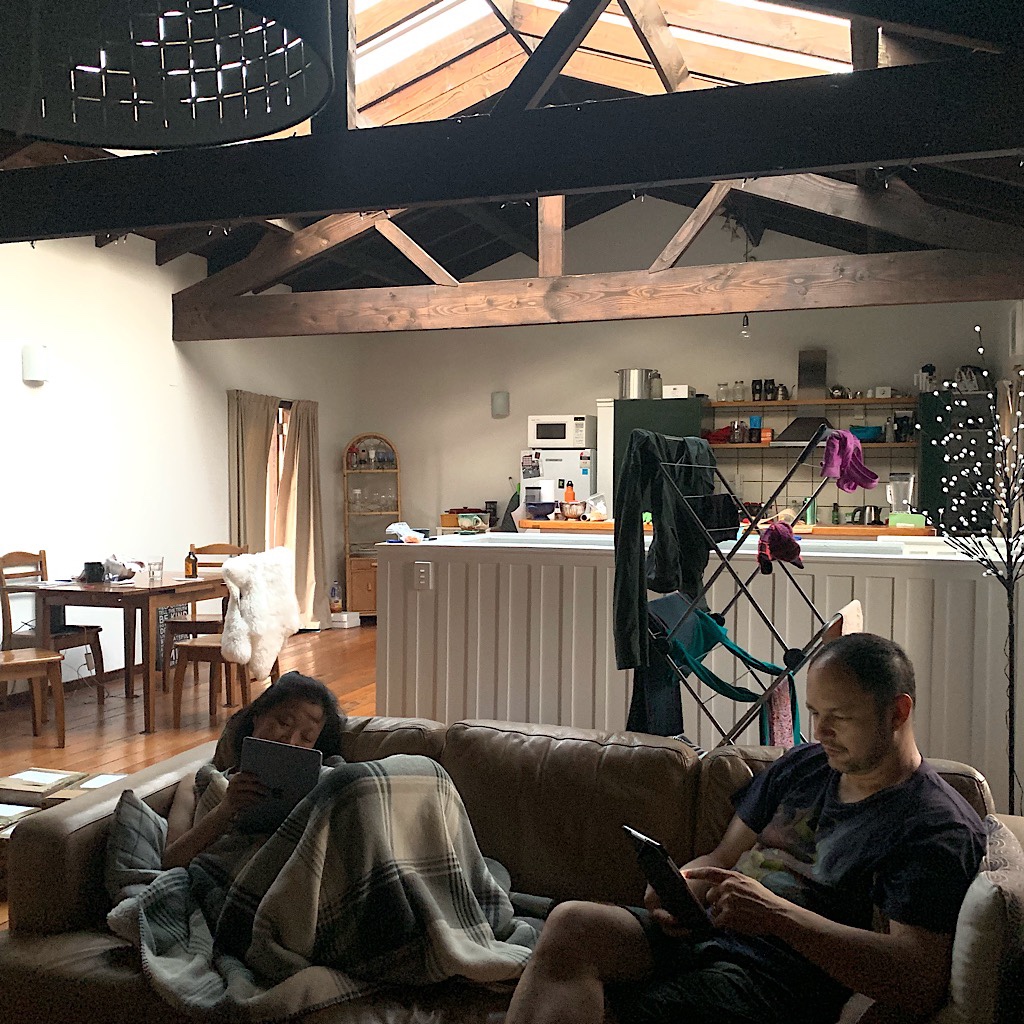