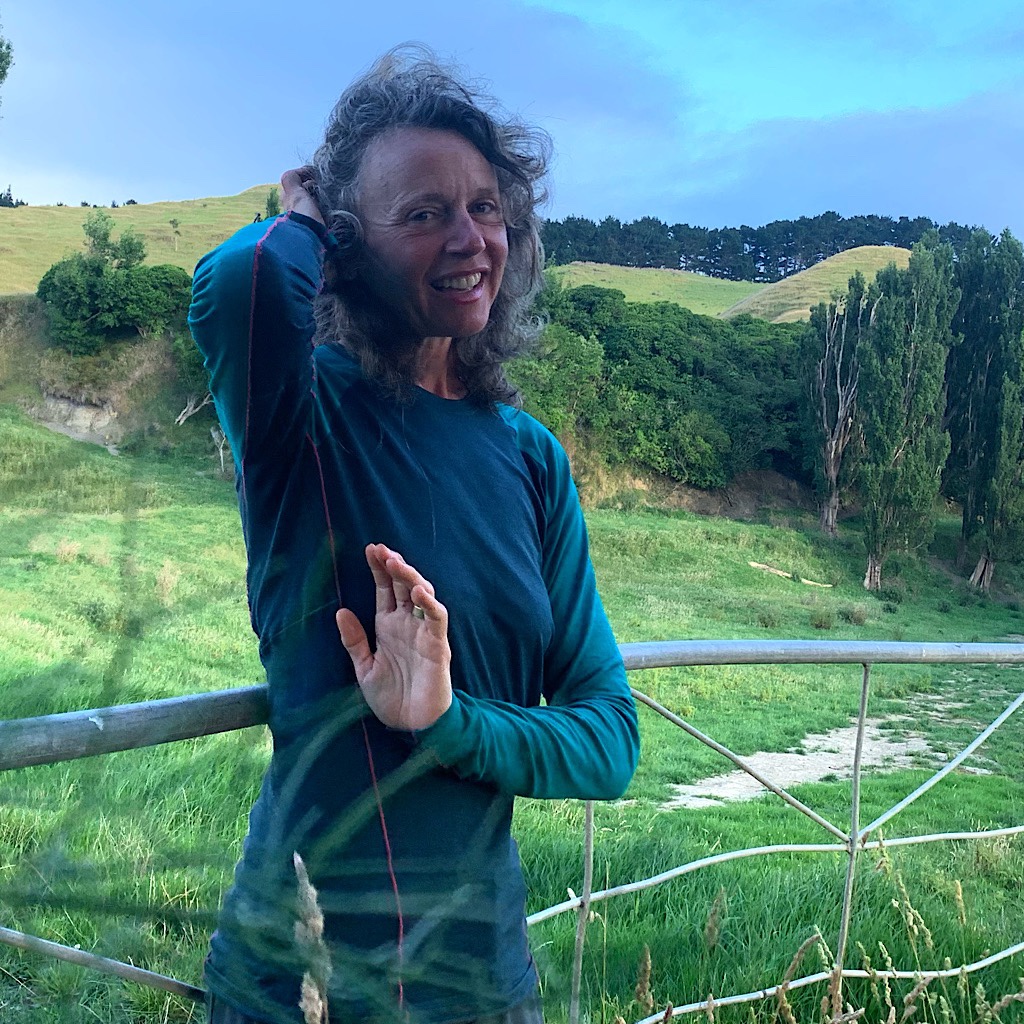 I dreamed last night that I was walking, but would wake up and see the stained glass window in my bedroom at George and Rob’s, and realize I hadn’t moved. Stress, anyone? A bit.

And my pack is weighed down with food I’m too cheap to chunk. It’s funny how just a day away from walking coupled with the unknown, makes me wonder if I even remember how to walk.

But Rob has me giggling in no time as we squish in for a selfie, the camera set on ‘beauty face.’ We drive on the long stretch of highway I hiked, stopping at a Pa site and a gate they named for their first TA guest, Sandro. I see NOBO Chris from Mt. Crawford, head down, walking the narrow shoulder and I’m glad it’s in my past. 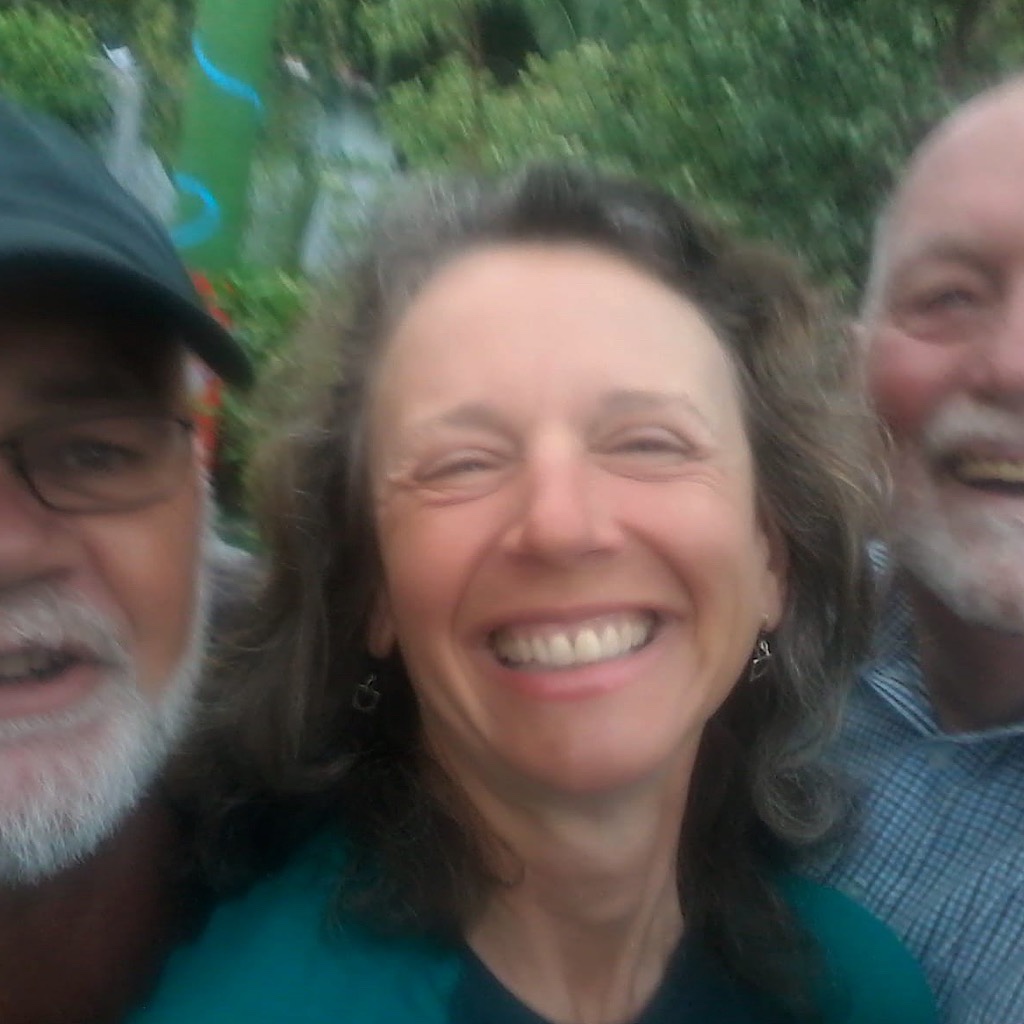 We come to tiny Sanson – or Sandon, depending on who you talk to – with its historic church, plus two others from that time of chasing souls which are cafes now.

At the airport, we see off Rob’s son who lives in Australia. While waiting, I read a blog about the upcoming Richmond Range on the south island written by a young man who meets an ‘older lady’ on the tail end of her six-day solo tramp beating him to the hut. ‘Respect’ he puts in brackets as I say out loud to my friends that I’d slap sense into him to remove ‘older’ change lady to woman and use a far more appropriate response – ‘humbled.’ 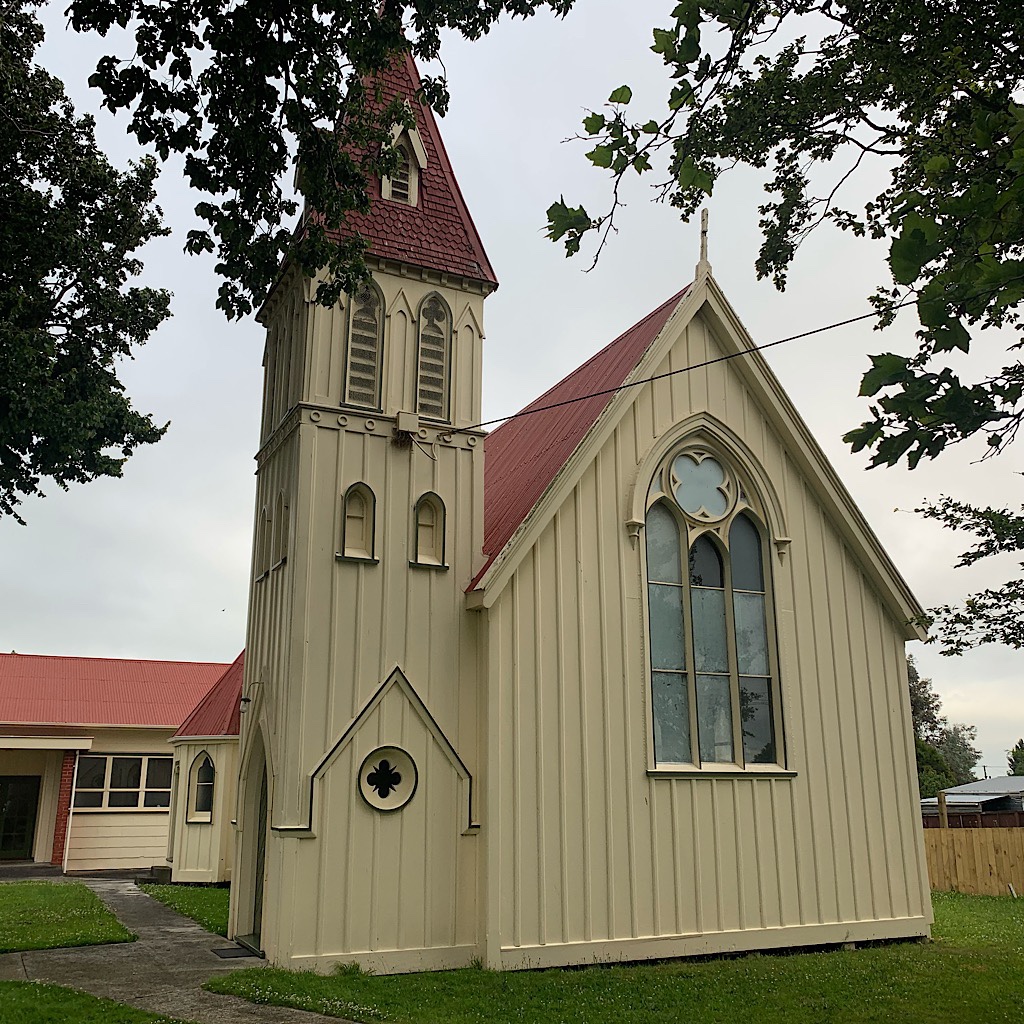 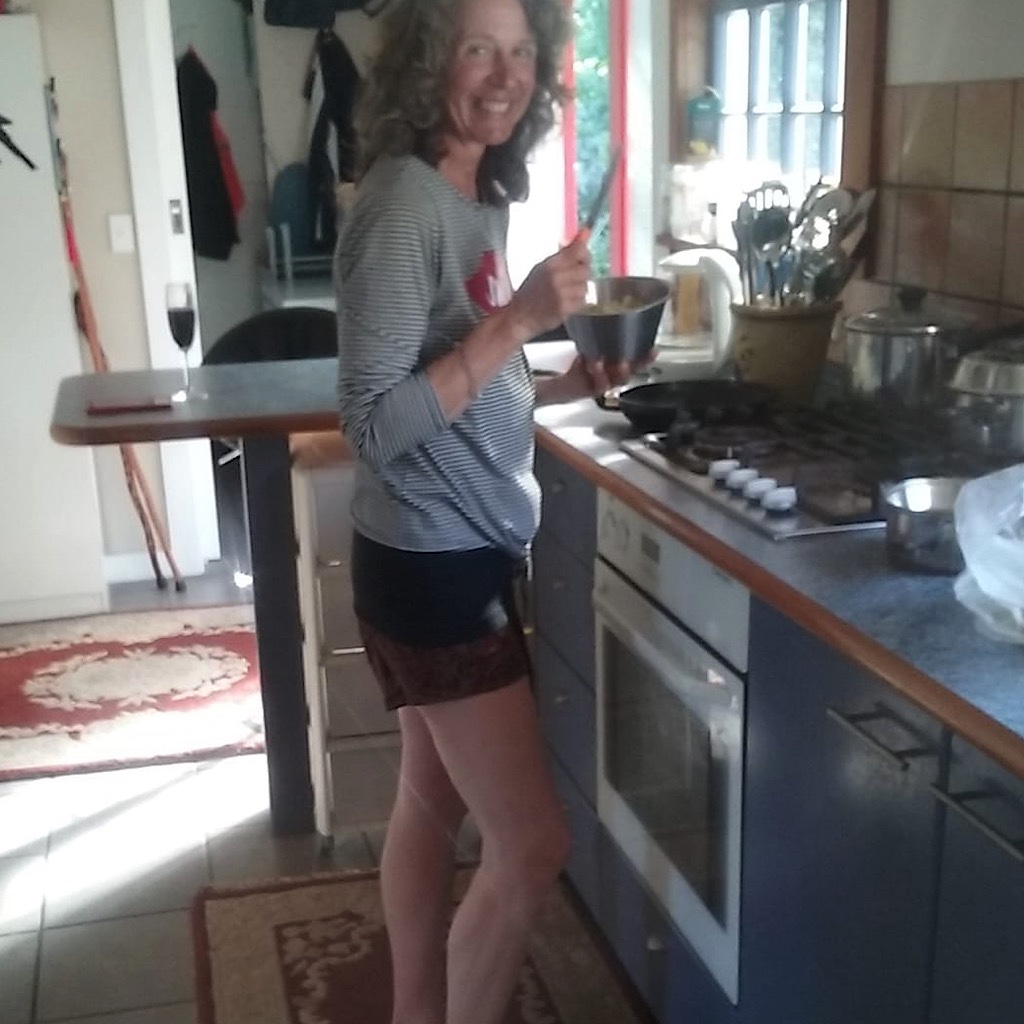 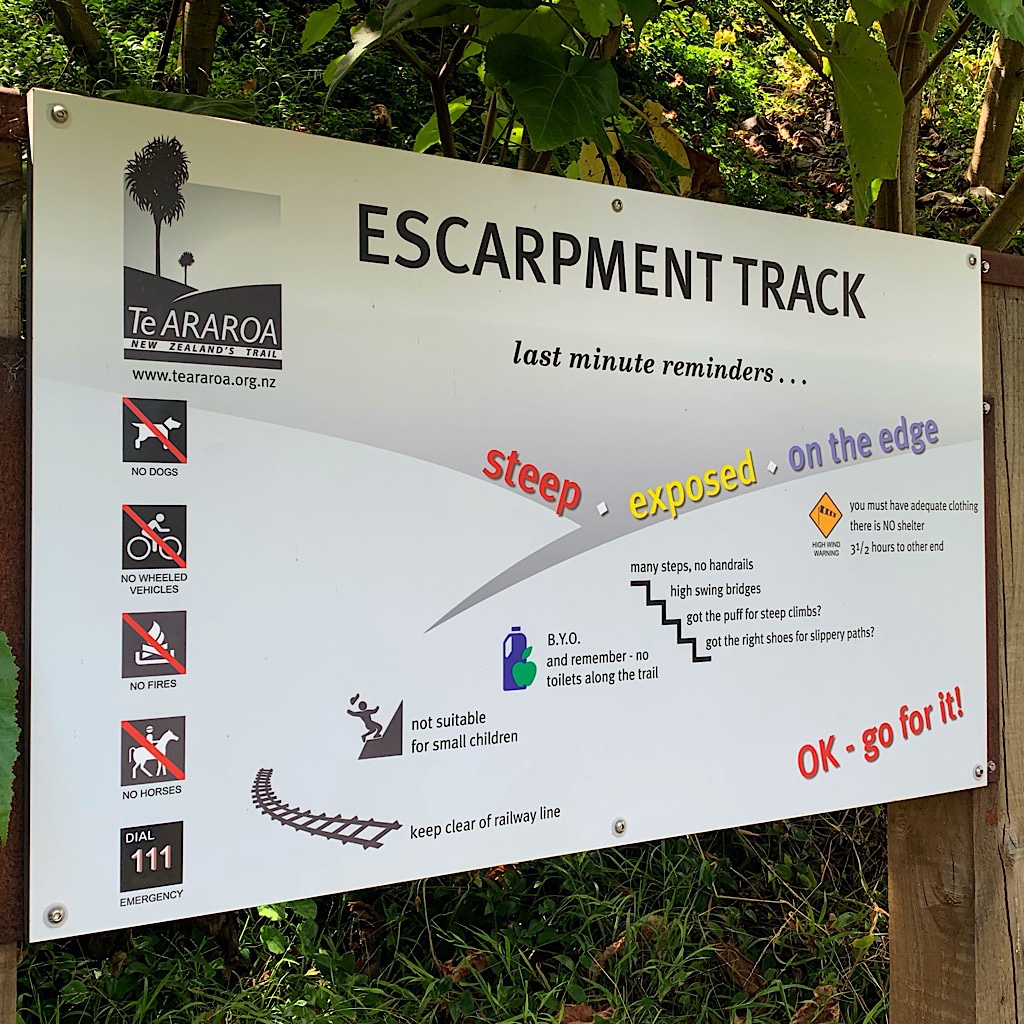 Rob’s son’s first flight is domestic, so security is lax and the entire family is at the one gate hugging and sharing hongi, a few tears shed. I flash back to my childhood, pre 9/11 and the consequent endless lines at security, when my dad could walk me and my brother all the way to the gate to wave goodbye before the lonely flight back to my mom’s home.

Rob says he and his ex-wife worked together when they split, protecting their children and staying a family even if separate.

We drive through Palmerston North’s busy square under overcast skies. Rob tells me rain is roimata or tears of heaven and is always a good thing. No rain today, but some fog as we say our goodbyes and I head to the escarpment with warnings of steep drop-offs, high wind and no water for at least three hours. 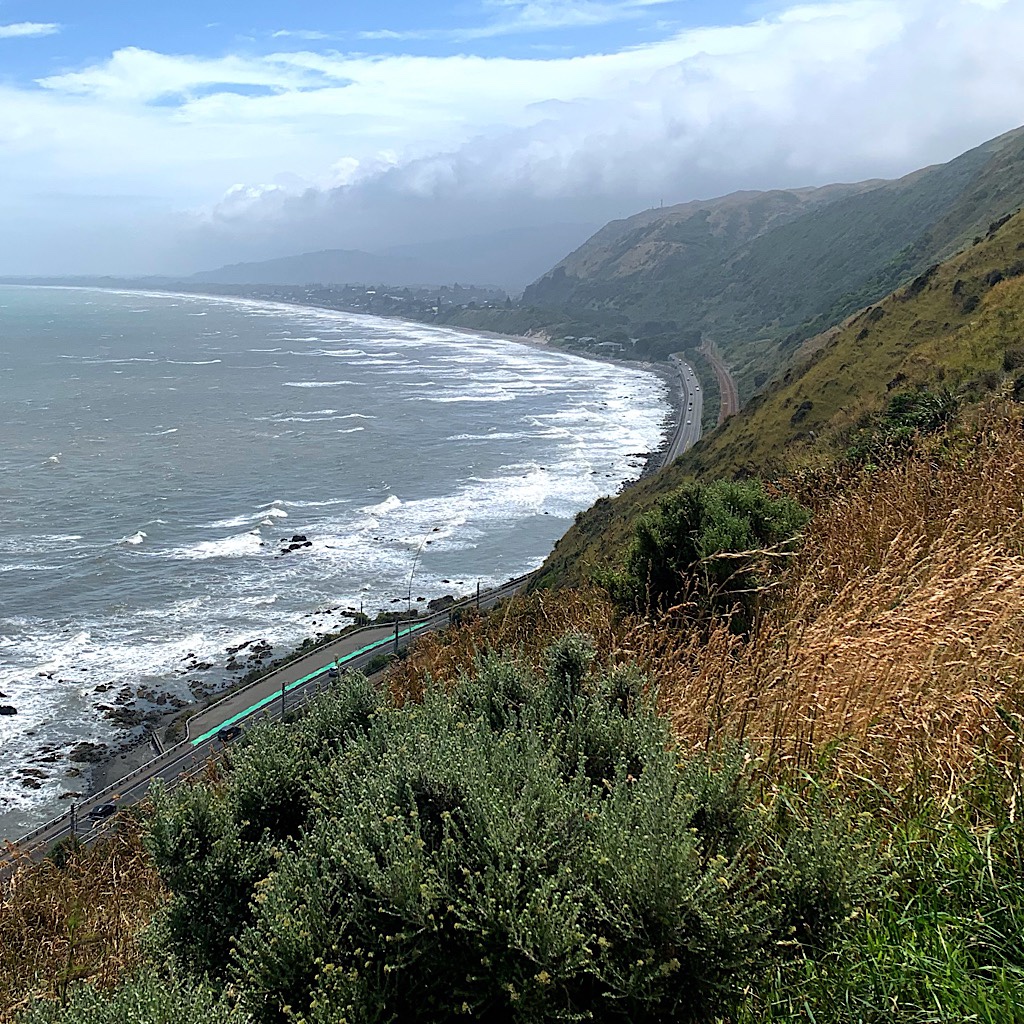 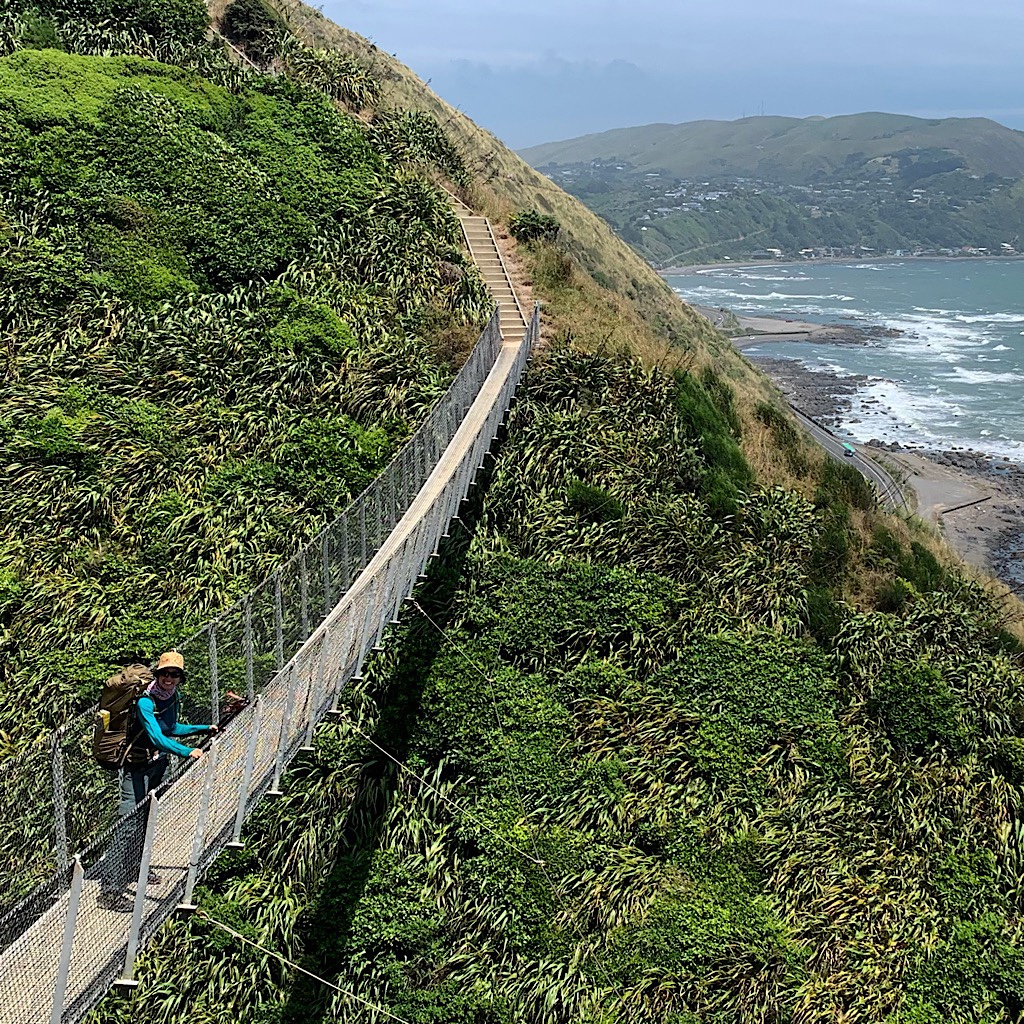 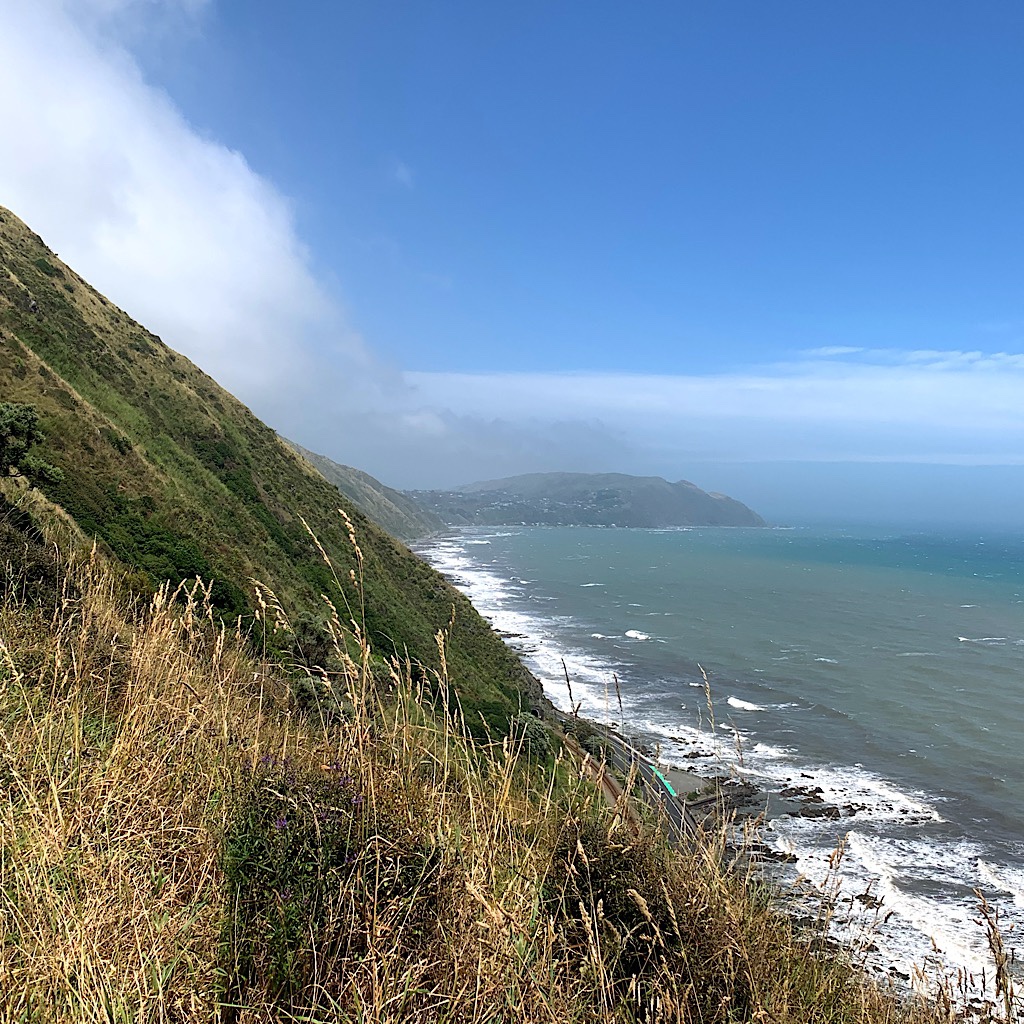 I go up above the rail, the highway and the ocean, cicadas loudly sawing their bouncy melodies. I look for northern grass skinks, lizards that can live to forty years, and learn that New Zealand has more lizard species per land mass than the entire world.

This trail rests upon a stuck piece of the Pacific plate, only mini-quakes move it, centimeters at a time. A good thing as the trail is steep and aerie on the cliff’s edge. The wind is up, fortunately blowing towards the mountain on this narrow guardrail-less track, but I watch my step. Sheep graze at the top, ignoring the breathtaking view.

I cross a suspension bridge bucking and bouncing in the wind, laughing the entire way. Many locals pass me and I finally meet two young Czech TA hikers wearing Granite Gear packs – made in Minnesota. They know all about the Prague Spring Festival I’ll attend in May. I do miss classical music a lot and they even know the opening night program. 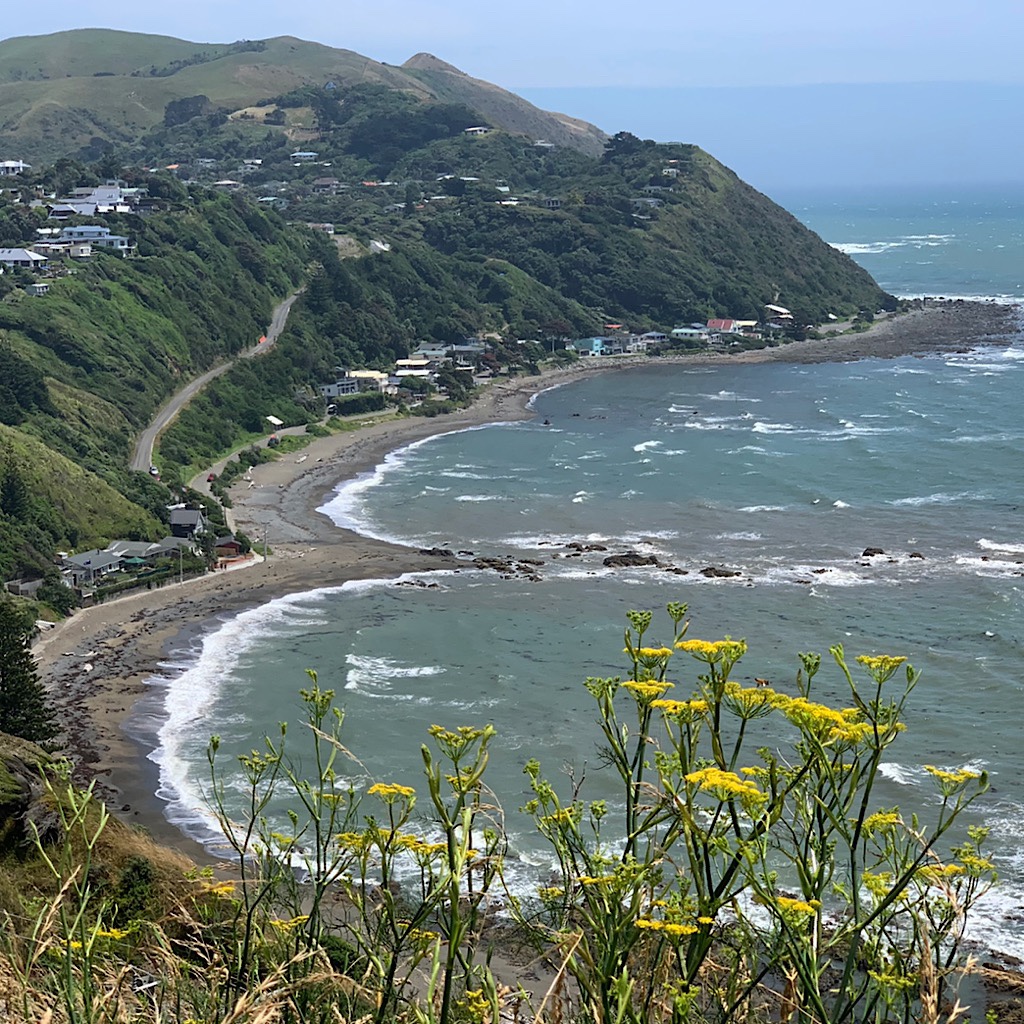 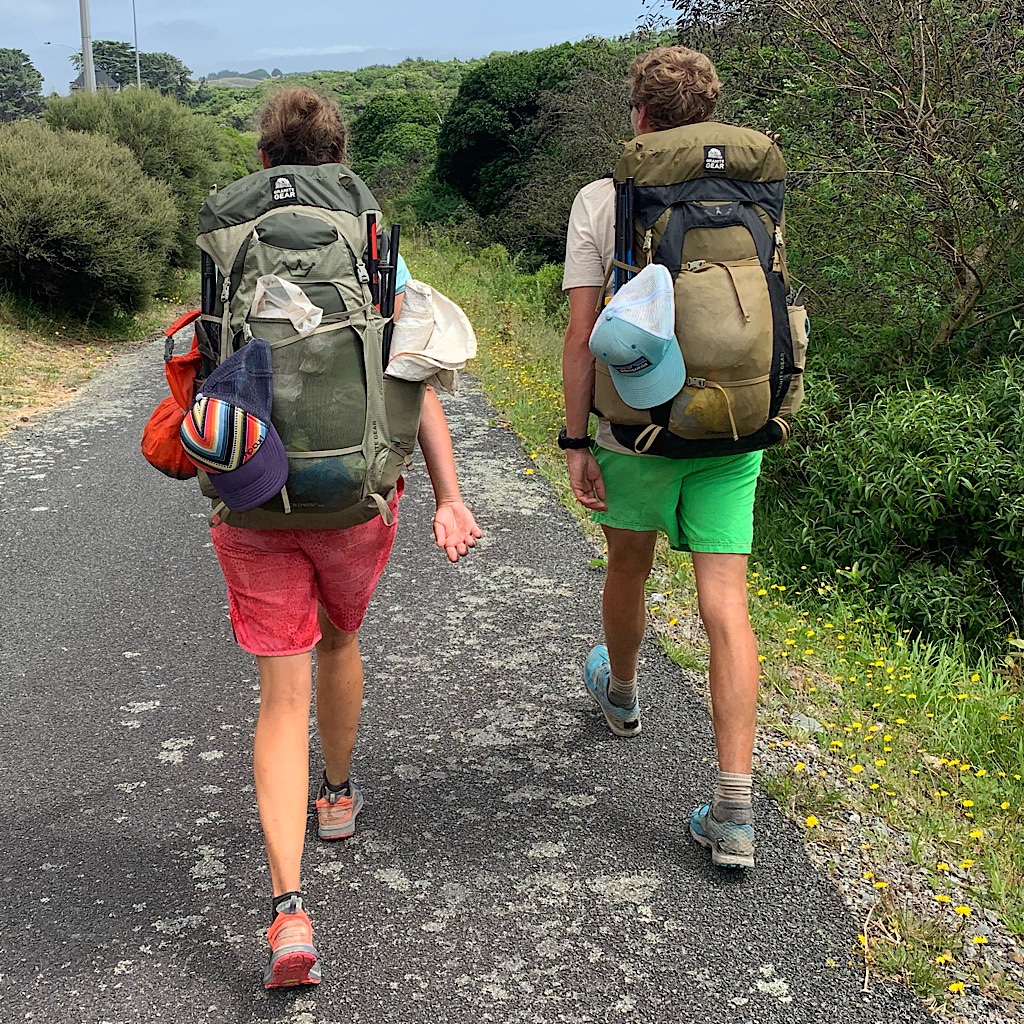 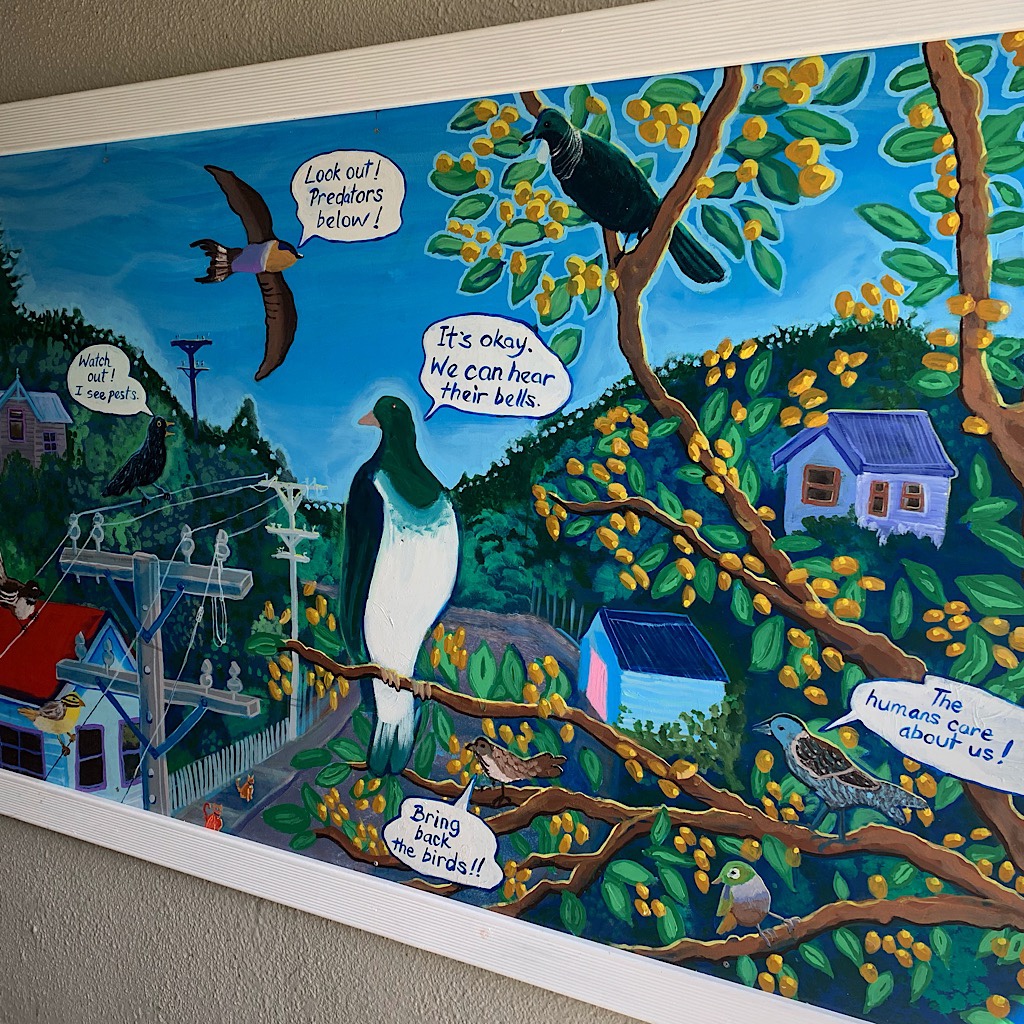 They’re moving fast and I follow from a distance on the Ara Harakeke cycle path, a relief from the highway next to an extensive swamp that somehow missed getting drained and is filled with happy creatures.

The beach at Plimmertom is surrounded by aqua ocean, a few wind surfers taking it in. At the Mana marina, the wind screams in the rigging, but I’m hot on the path. I cross a bridge warning ‘no diving’ as a young man leaps off the middle.

I pass Aotea College and come to Gear Homestead, hoping to maybe change out my shoes, but it’s a function venue that includes an Italianate home from the 1850’s owned by a wealthy businessman named Gear. It’s an oasis, really with an oddly juxtaposed adrenaline forest below of numerous high wire challenges in the sky. The bikeway along the main road exits by ramp straight into big box shopping hell, though many stores stand empty, dusty fingerprinted windows from a different era. 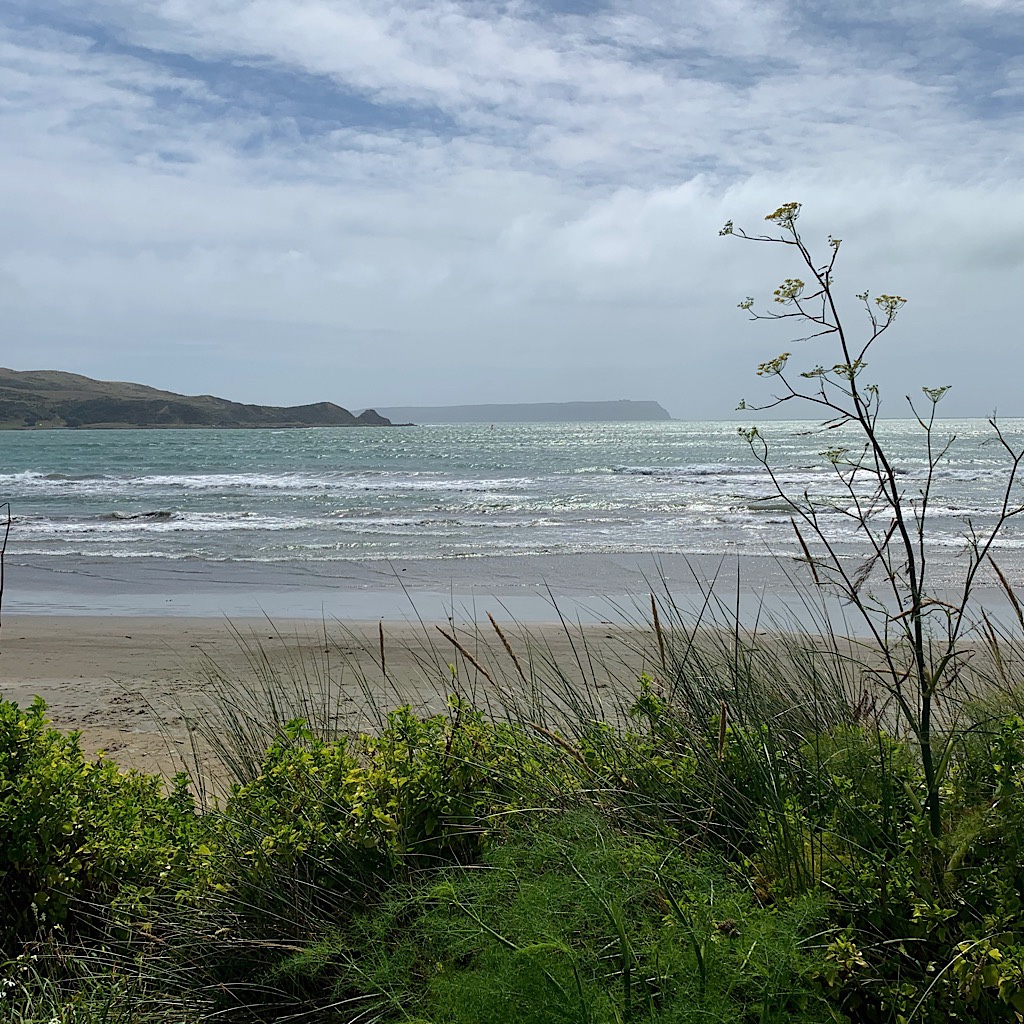 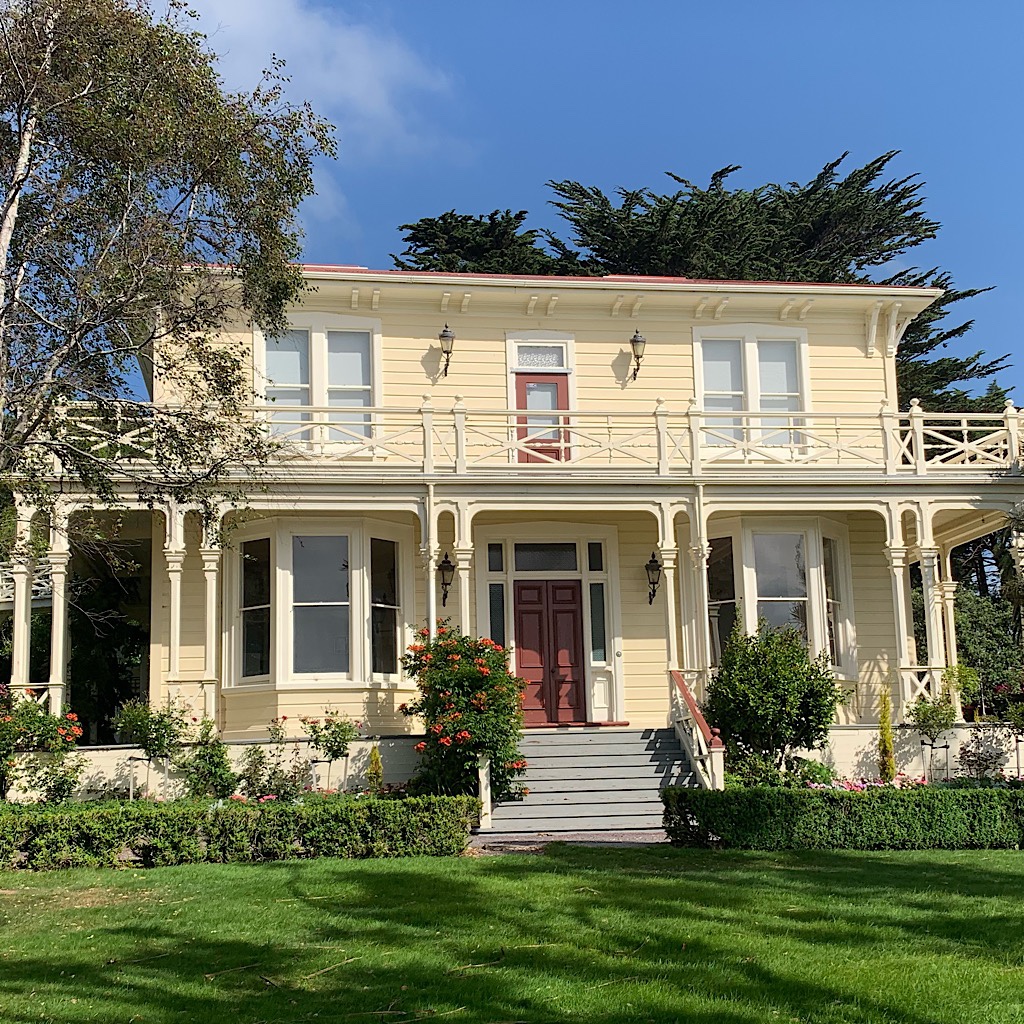 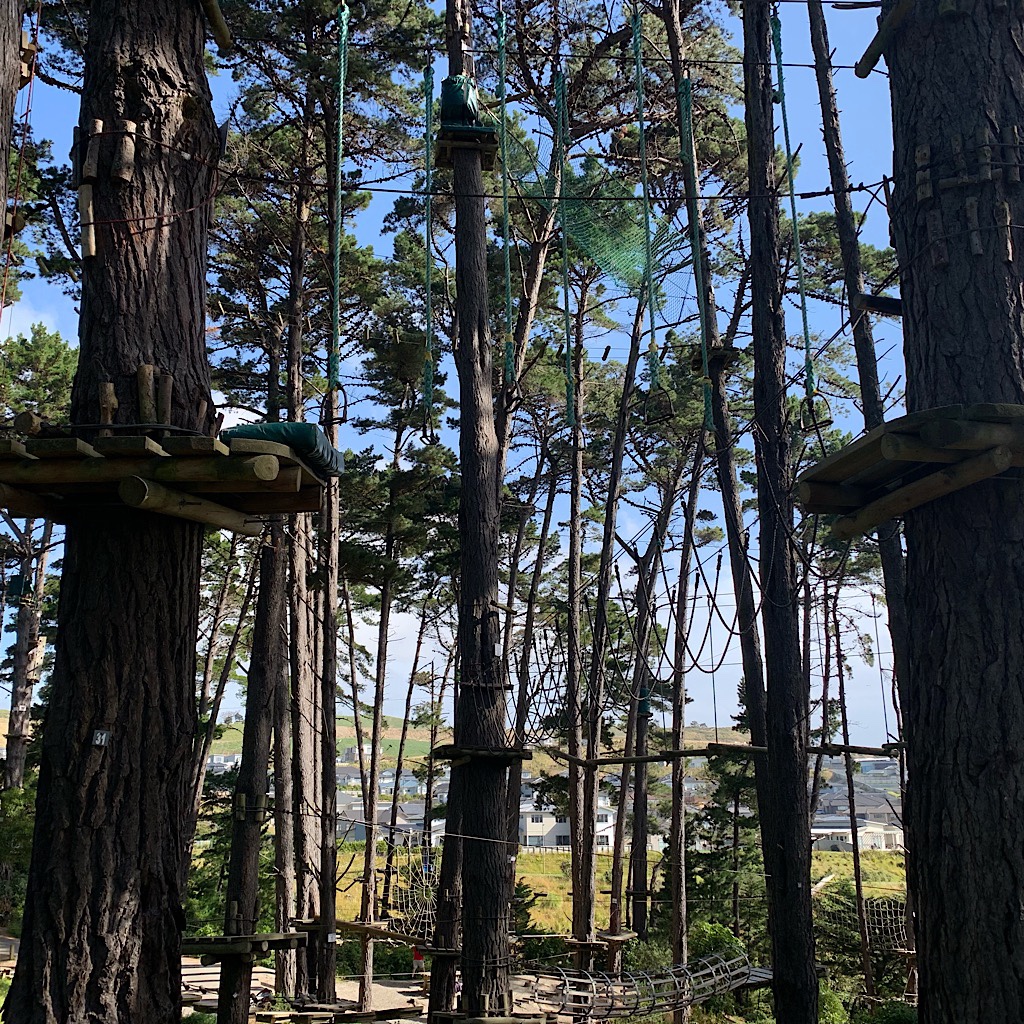 I see two more hikers who I follow past the malls to a trail into the bush, a kind of shortcut between roads. It lands us at Camp Elsdon filled with noisy caravans, but the Czechs guide me up behind cabins to a quieter section next to a forest filled with birds.

I’m already cuddled in at 8:00, still tired from the last weeks, but feeling accomplished nearly completing the north island and beginning to plan out the south island.

I know I’ll need cheerleading to keep going as I’m starting to feel the wear of so many kilometers. The escarpment was stunning today, but coming into a sprawling, loud city is draining. I still have two days walking to – and through – Wellington, and it takes the time it takes when I walk every step. But I have lovely people to meet ahead and so much more to see and experience. It’s still light, but turning cold, so I’ll take all that’s positive into my dreams. Good night!