I’m up before dawn, quietly moving my gear into the common room so I can pack loudly. Someone on the Guthook hiker app couldn’t find this fabulous space with several sinks, dishes, hot water dispenser and comfy chairs where I prepare for the day ahead.

I’m nervous starting because I have no idea how I’ll get to the start of the Routeburn. It’s not officially part of the Te Araroa, but right along the way joining the TA at the end. Considering how strong I am, its 32 alpine kilometers are doable in a day.

One thing I have learned is that worry shakes off once I get moving. It’s about a kilometer from the holiday park to town, Sirius is piercingly bright still, the clouds turning pink. 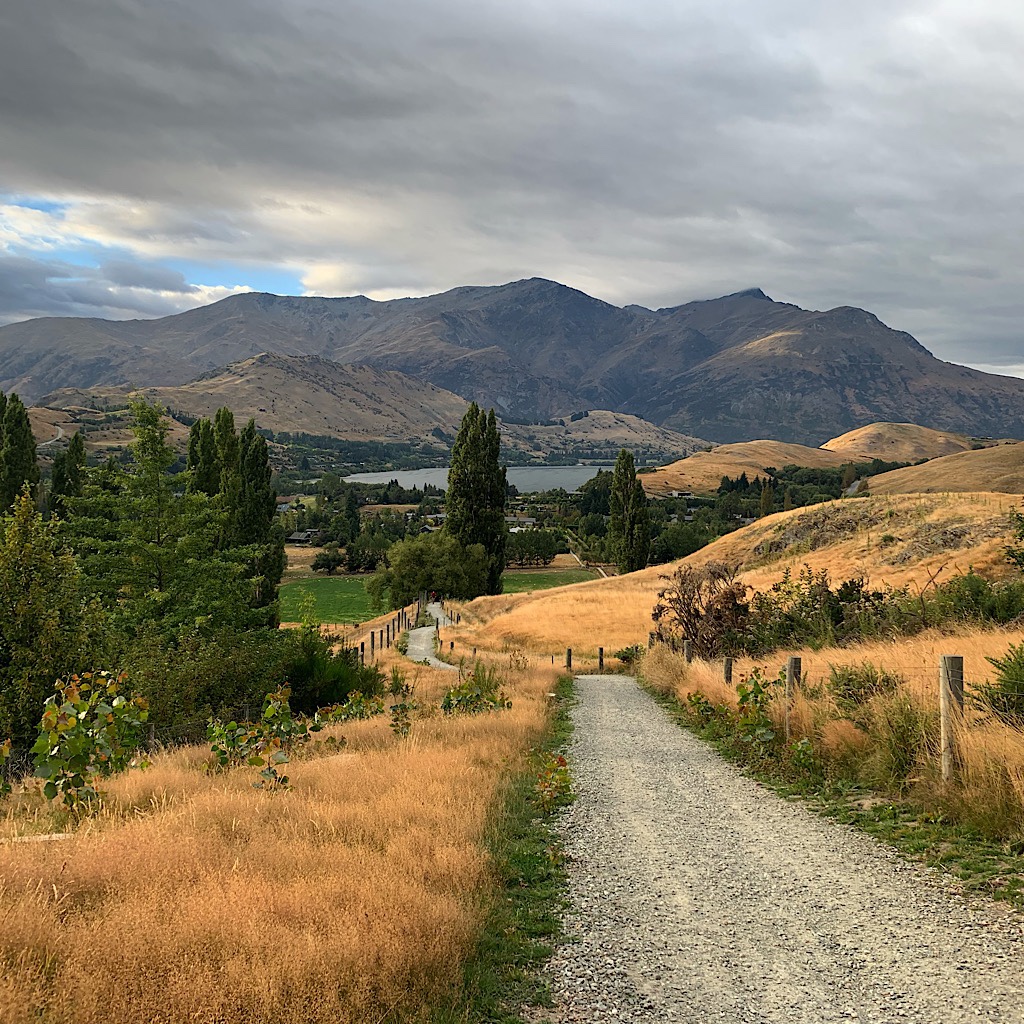 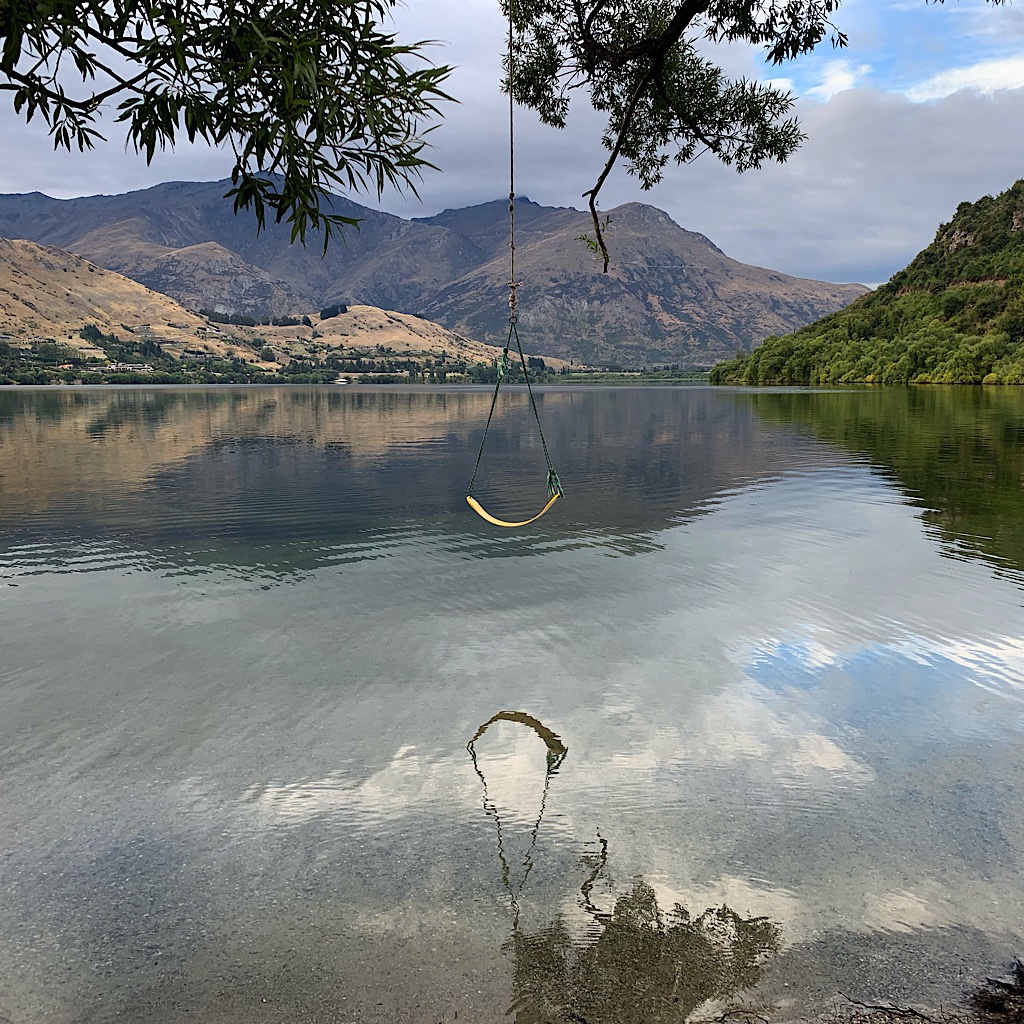 New Zealand has spotty wifi, especially if in use by loads of people, so I slip back to the bar from last night for one more try at posting. Chairs on their sides, onions delivered in a plastic crate by the door, the street sweeper tidies up.

There is a bike path all the way to Queenstown and I consider myself lucky to avoid the noise and bustle of the traffic in this beautiful – and hugely popular, maybe over-popular – area.

A hot air balloon is up catching the morning sun, but the day is mostly gray and gloomy. The path arrives first in a planned community around a golf course. Cookie cutter homes made to look like old stone miners cottages in perfectly manicured surroundings speak wealth. The groomers keep early hours, one driving a mower that can move sideways.

It feels too perfect, an astounding contrast to what I’ve walked with this very easy path. I miss the more eclectic, laid back feel I’ve come to connect with New Zealand, though I wouldn’t go so far as to say I miss tussock.

Beautiful Lake Hayes feels more real, washing hanging on the line and a few white elk in pens behind a house. Grebes dive in the calm water reflecting the sandy-brown hills above. 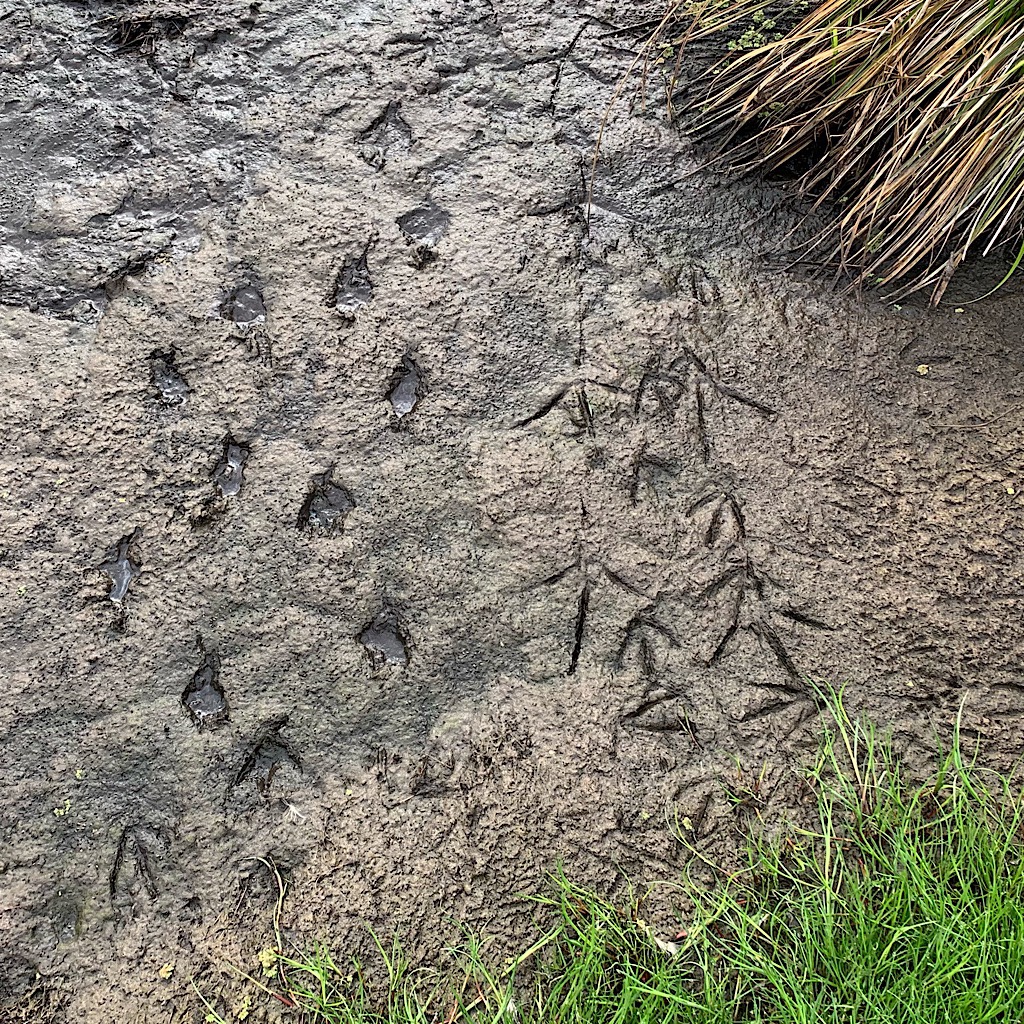 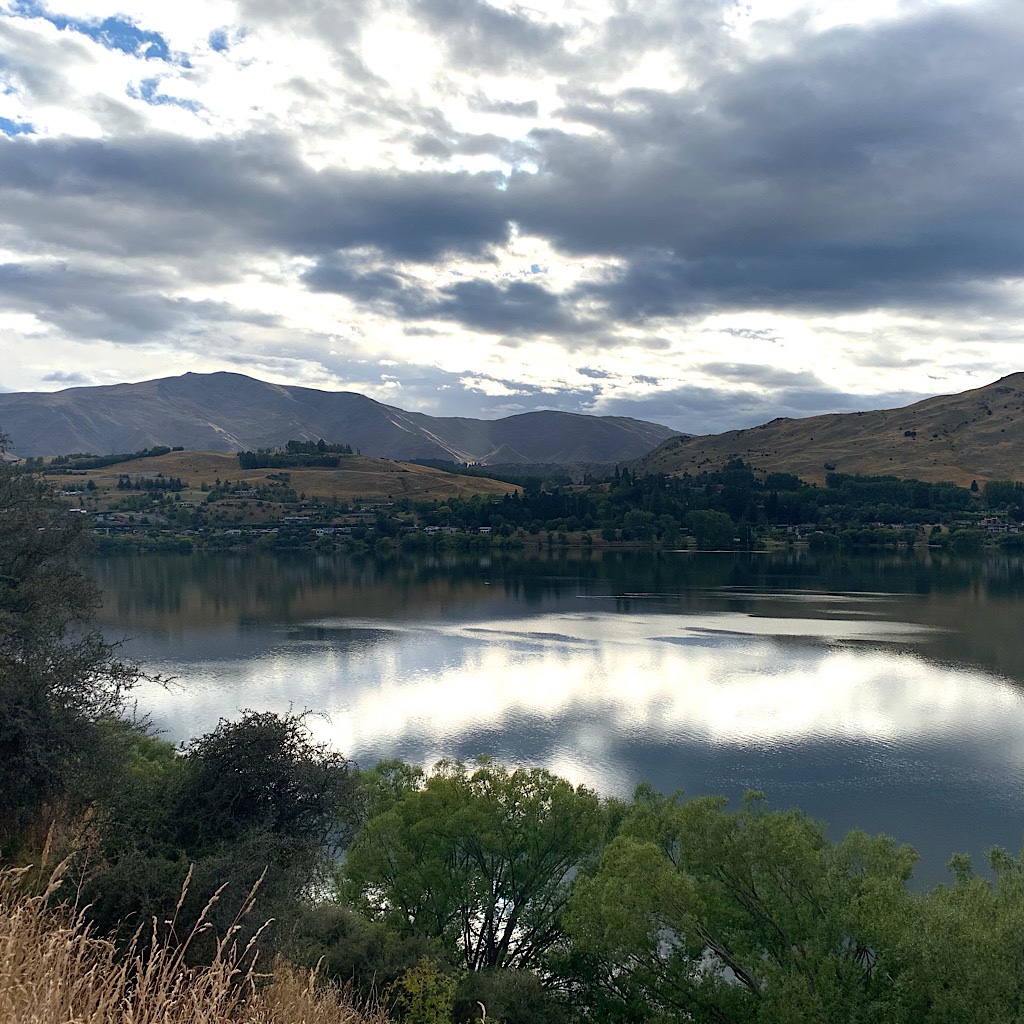 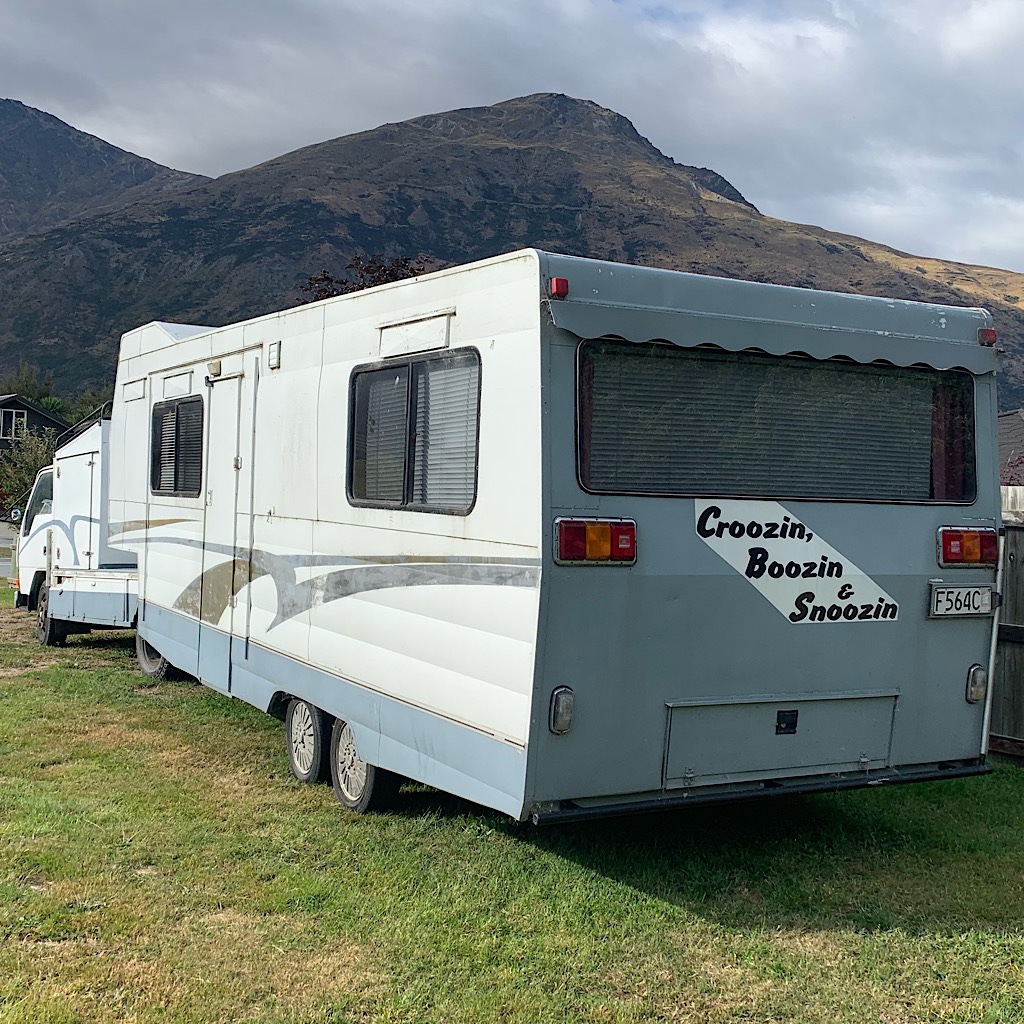 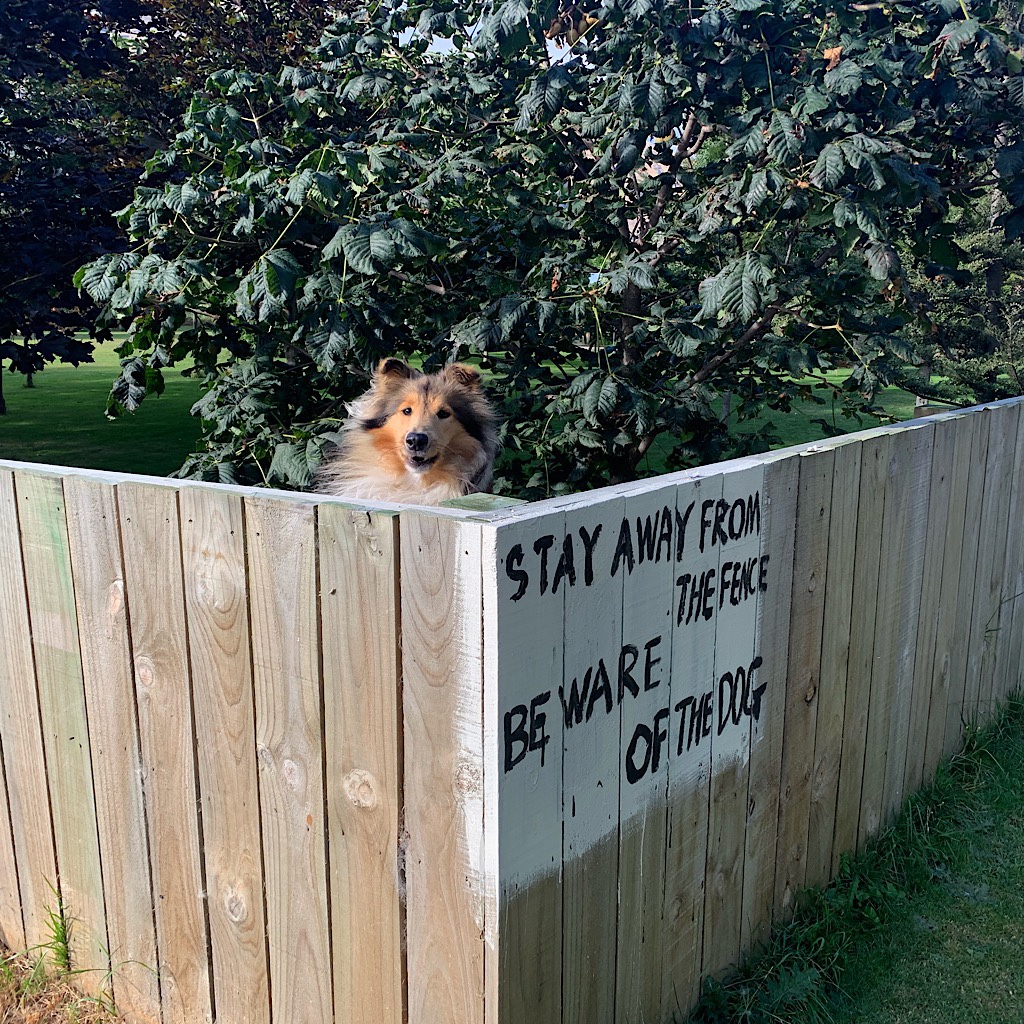 I begin to pass runners and women with baby carriages and dogs. I recall last night’s conversation as we all lounged in our bunks in the private dorm. David shares – in that clinical, serious manner of young German men – that he can’t maintain a romantic relationship longer than three years. I’m only half listening, but can’t hold back asking why, and he explains that it’s only a matter of time before he becomes bored with the sex and feels only sisterly affection for his girlfriends.

It does make me wonder that if all things lose their sparkle given enough time and familiarity, is it up to us to reignite the sparkle in what is familiar or do we need to make the effort to find more things that sparkle for us and feed our curiosity?

It does seem he – and maybe his partners – lack imagination, and perhaps risk-taking. Walking the length of a country certainly jump starts a person’s wonder with the world and what and who is in it. But I know I too get bogged down in the quotidian – having to get somewhere, having to eat and sleep and not always feeling elation as I set out to accomplish those goals. 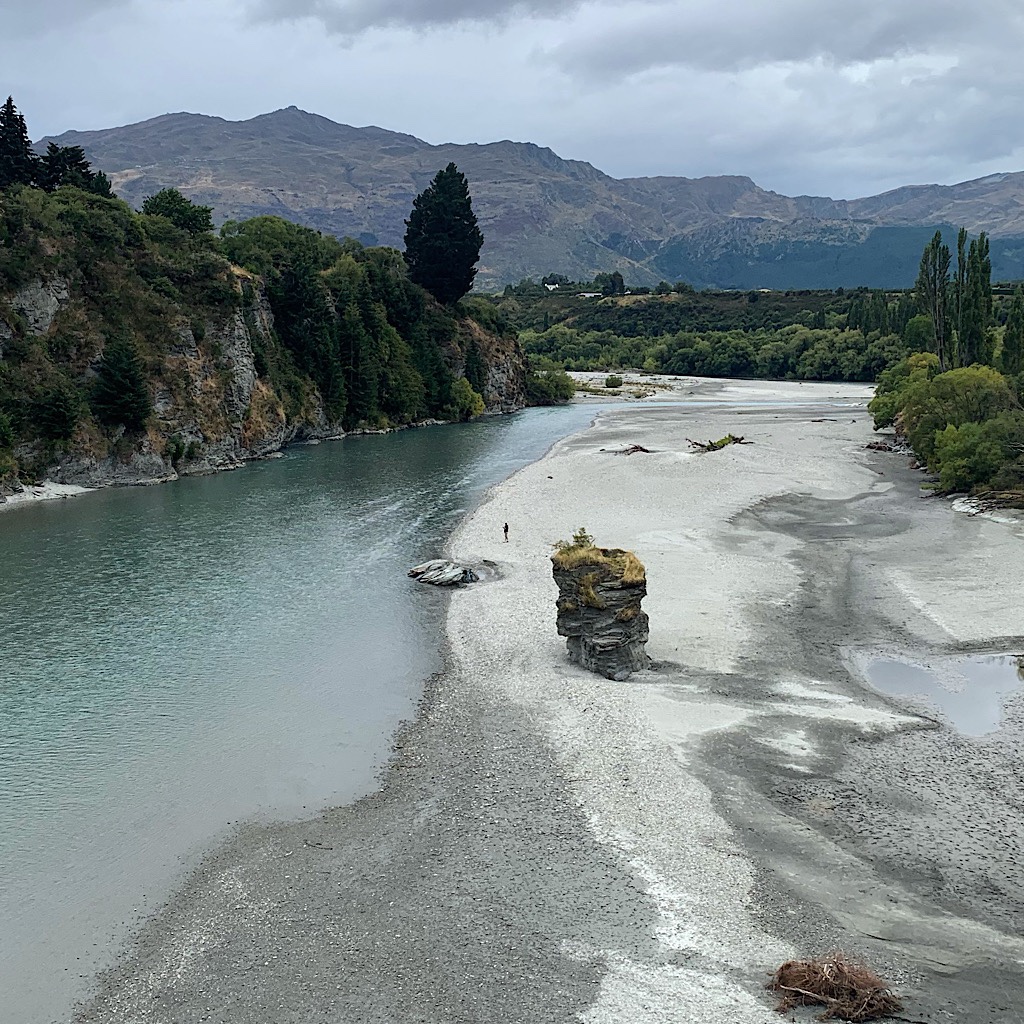 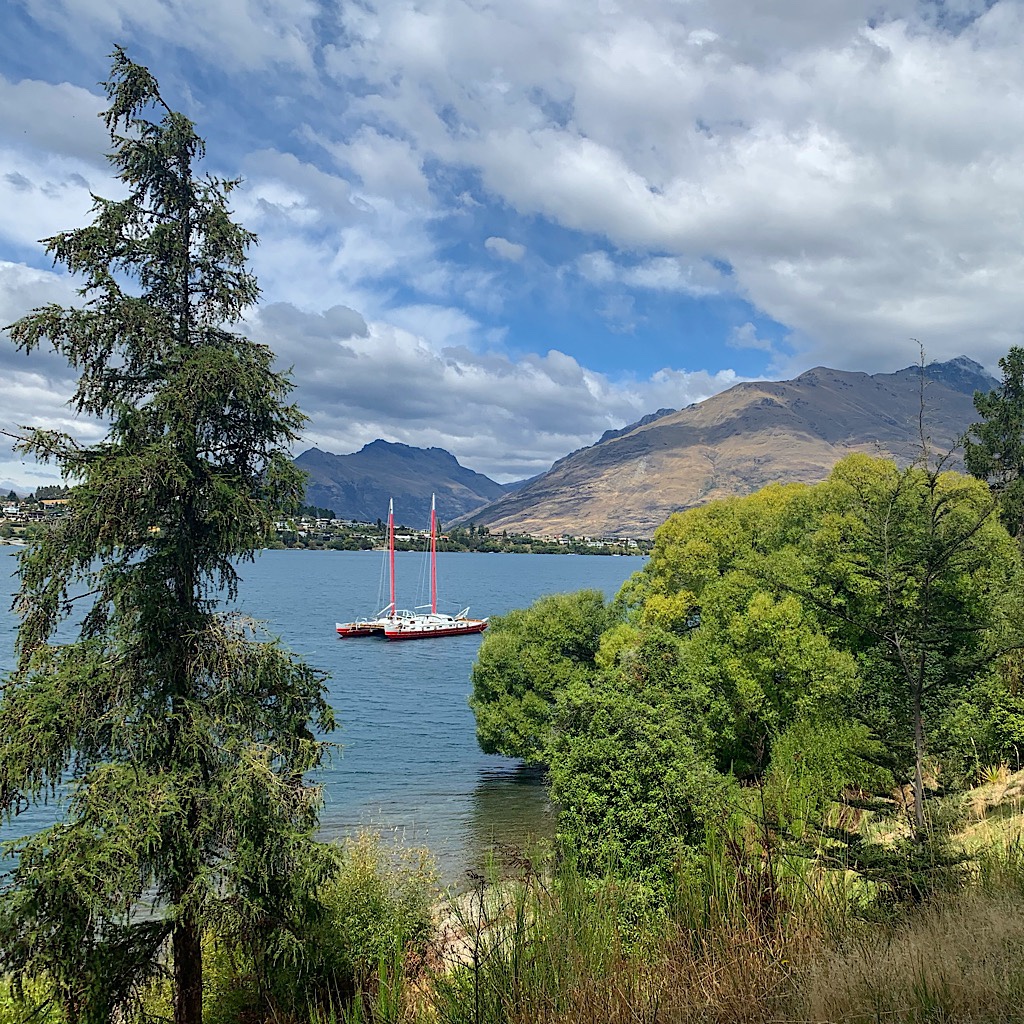 As the trail winds down, I loosen my grip, knowing I’ll end up somewhere tonight and so try to enjoy the moments as they pass. Like this odd moment now behind people’s backyards. Lots of trampolines, for some reason and Lassie, at one house, off her leash. These houses retain uniqueness even though in rows with neat roads and drives sitting above the river.

I walk along it, aqua with sandbars, a jet boat showing off making sharp wake-inducing turns. The land here is marginal getting me from point A to point B. I turn up another river, the Shotover that’s said to be deep, full of quicksand and a major barrier to travel. This former primary bridge is now used by just us hikers and bikers. A sign points out peaks nearby including a set of jaggedy ones called ‘The Remarkables.’

It wouldn’t be the TA if I didn’t walk through industry and an airport plus ‘five kilometres of shopping.’ I stock up at a massive Pak-n-Sav, having a second breakfast with Super Survival juice and egg salad.

Lake Wakitipu begins with the long Frankton Arm, children in orange and yellow safety vests play some game of their teacher’s devising in the grass with million dollar views they must take for granted. Willows line the lake, brightly colored boats parked under their wispy branches. The largest in Otago is here with an eight meter wide trunk and 30 meter spread. Staircases in wood and stone lead up to private residences looking out on this magical setting. I miss my turn and head all the way out on a tiny peninsula, but lucky me, because then I notice disc golf baskets, hearing the ‘chink’ of victory from inside a pine forest. 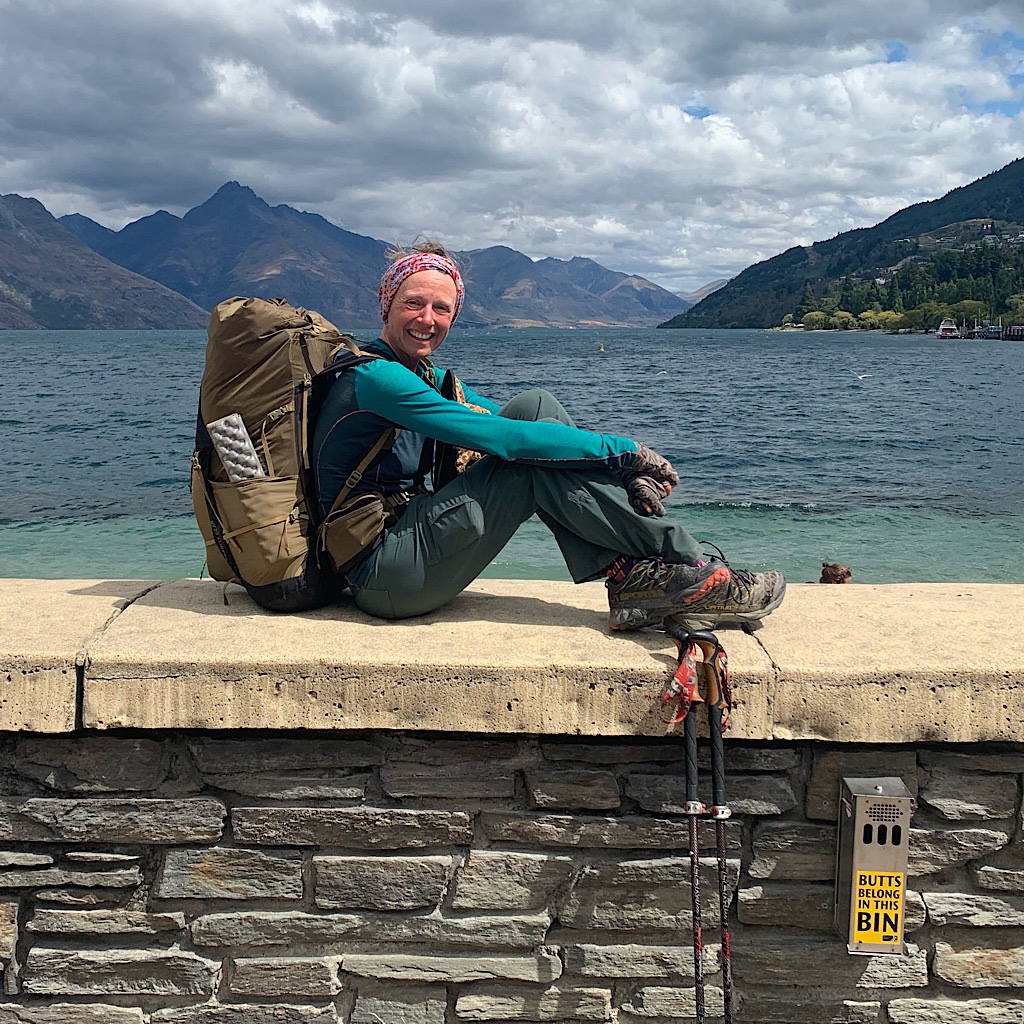 Queenstown is tucked into a bay and packed with tourists. It feels relaxed to me but the prices are steep and only the top retailers line the beach. I ask a local where to position myself for a hitch and he suggests near where the busses line up. I am passed by most cars, though a lovely Kiwi gentleman offers a lift but not very far as he is heading home to deliver flowers to his wife who broke her leg. I wish her well and wave him on.

Another Kiwi pulls up in lime green shorts driving a van he appears to live in. Rene is his name, a ‘Skiwi’ from Switzerland who tells me most cars are not heading out of town so he’ll get me to the glacier view turn off where I can find a ride for the next leg.

I must explain that Lake Wakitipu is another ‘hazard zone’ where the TA Association simply can’t manage a safe trail for hikers, even on the road because it’s narrow, full of blind curves and driven by tourists – or, as my step-father likes to call them, tour-ons.

So we have to find a way across either by boat, shuttle or hitch. Which brings me to my very fast hitch – under ten minutes – with House music blasting and Rene flying down this magnificent, winding road next to the lake, spectacular mountain scenery opening up. 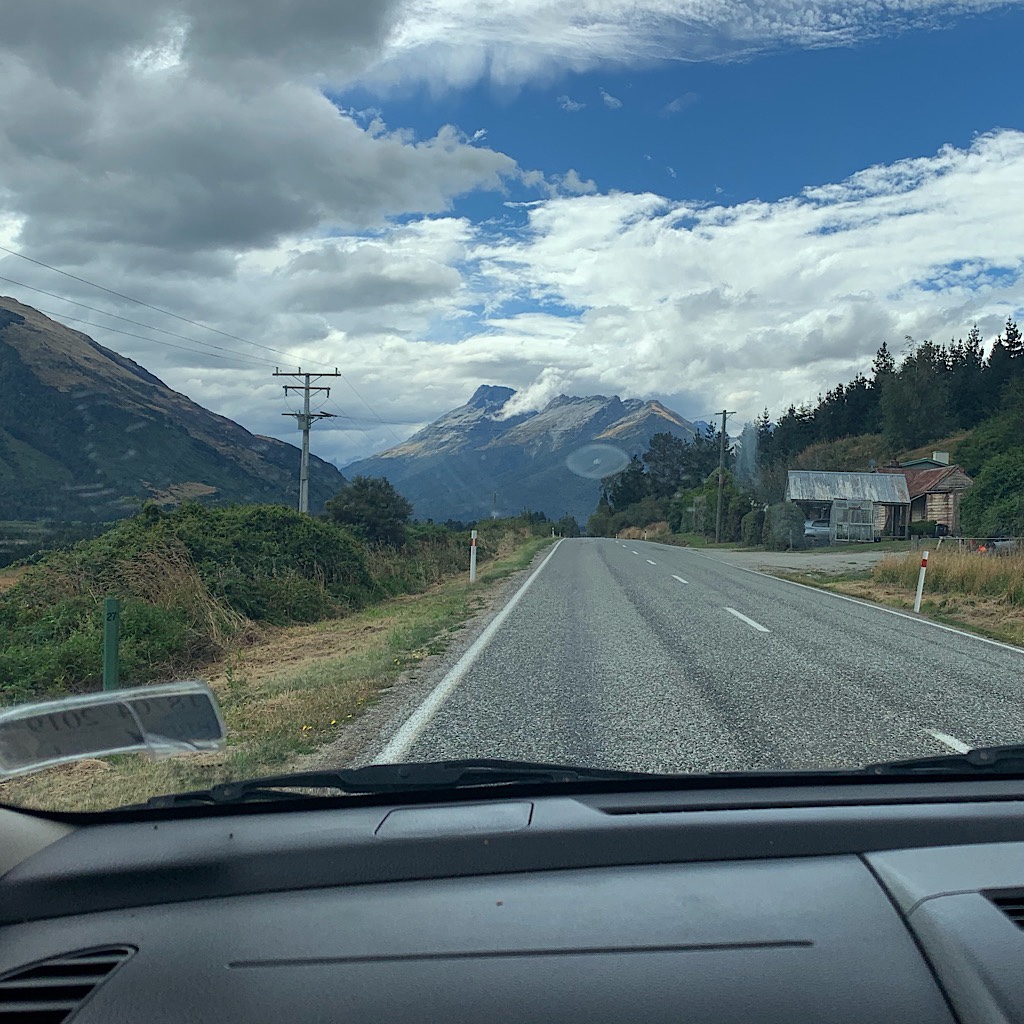 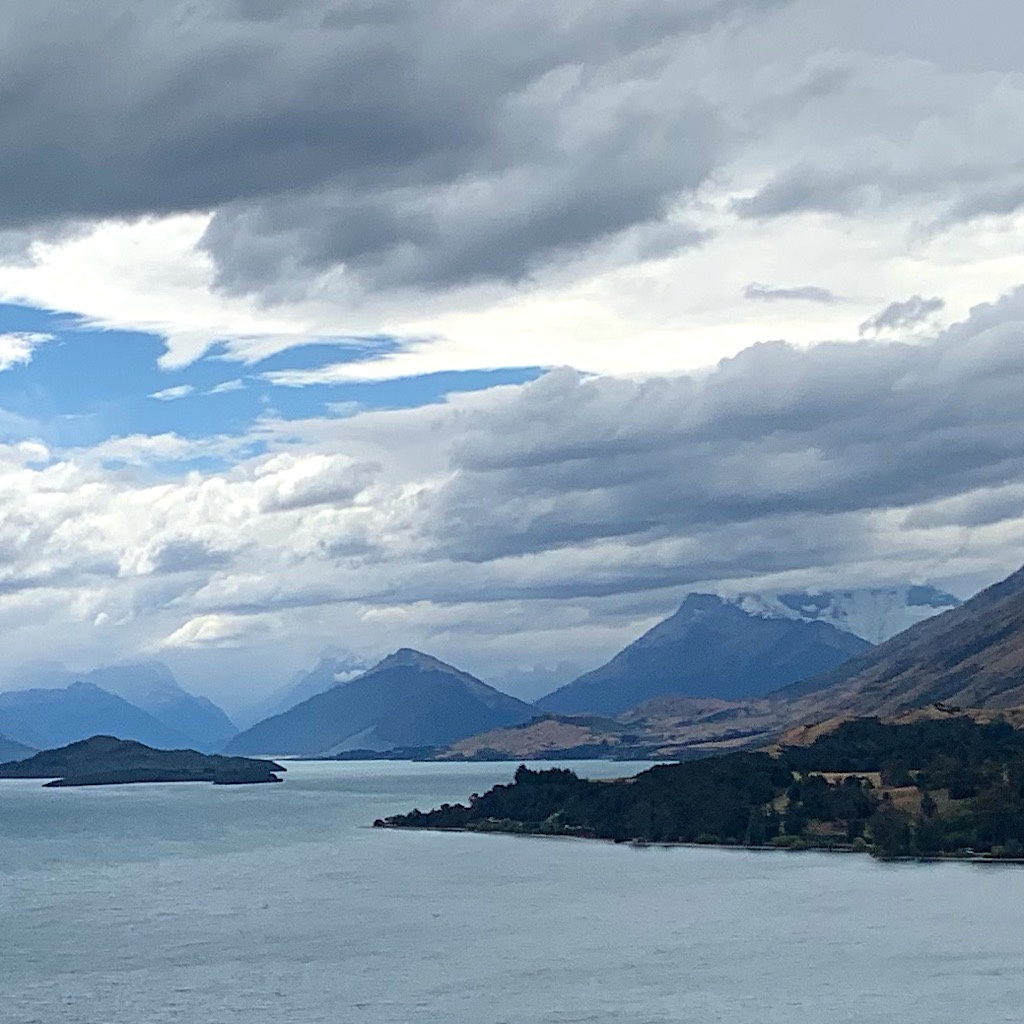 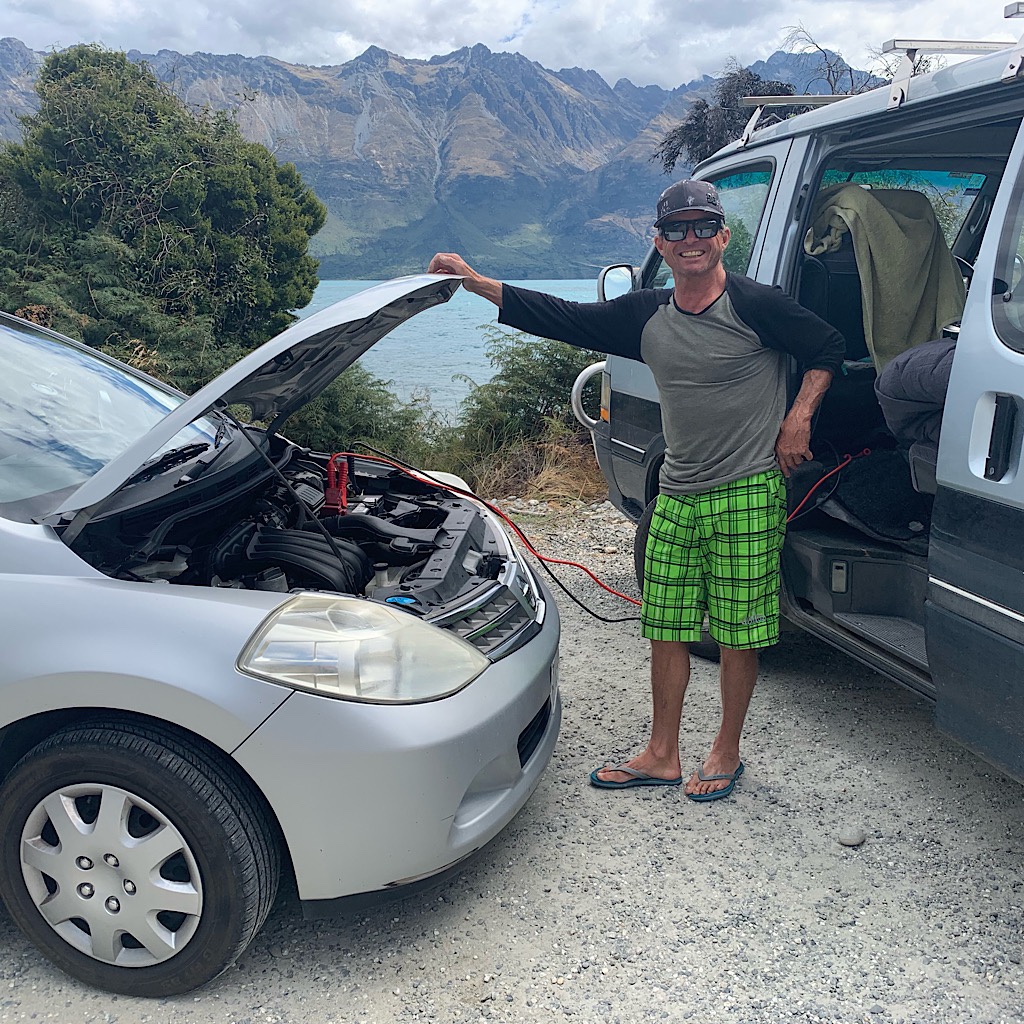 The drive is short as Rene pulls off at a turnout to let me out next to one other parked car. It’s a German man in need of a jump. What luck that Rene speaks the language and works out a deal. He’ll start the engine if this man agrees to take me to the trailhead. I’m not sure our new friend Bernd realizes the Routeburn is past Glenorchy where he’s headed, but he agrees and is overjoyed to be moving again. In my wildest dream, I hadn’t imagined being picked up so fast, handed off and delivered the entire way – and by such colorful characters.

Bernd is the opposite of Rene – cautious and slow driving us to Glenorchy, “the gateway to paradise.” I sip one of the dozen bottles of sugar-free lemon soda in his back seat, nestled there with bags and bags of rolled oats. One is open stuffed in the glove box and the rutted road sifts out a few loose oats onto my feet.

The track starts only a dozen miles north, so not really too far, the peaks getting larger as we get closer. A gravel road narrows and Bernd clings to the side as many pass. A New Zealand falcon swoops close to the wind screen and it begins to rain. Lots of cars are parked at a huge shelter with water, long drop, benches and informative signs. I give Bernd gas money and sit down as hiker after hiker, wet and miserable, arrives awaiting their shuttle to town. I find a good spot to make tea in hopes the rain will let up, which it seems unwilling to do. Bernd takes a nap in his car and returns to chat with me – and everyone else still in the shelter. He’s a friendly, curious and sweet old man who gives me the impression he doesn’t bore easily. I love that I ended this day with him.

A mohua calls out its uplifting refrain as the rain stops, so I sneak out and find a hidden spot in the mossy forest to set the alicoop just above the Routeburn river, as blue as a Southern California swimming pool. It’s tuna and olive noodle soup in rain gear on a carpet of mountain beech leaves, birds chattering and the water churning, a few sandflies looking for exposed skin before I crawl in to sleep and hope the clouds have squeezed everything they’ve got out this afternoon. They’re welcome to one last squeeze if they might consider a clear day for tomorrow’s walk.