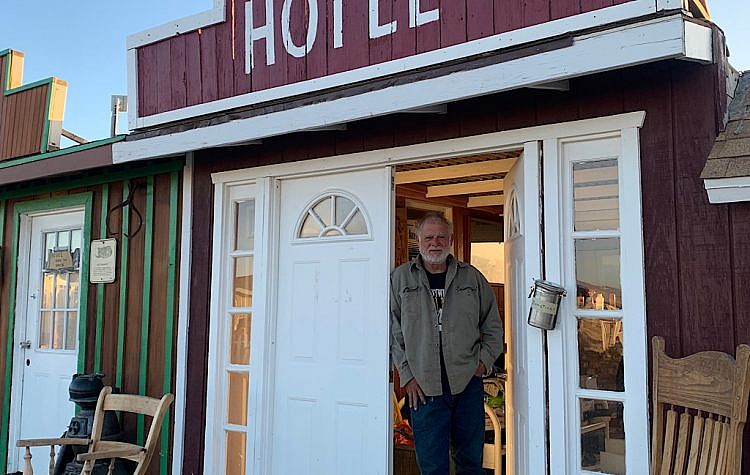 People say that you’re going the wrong way when it’s simply a way of your own.

Along the 2600+ miles of the Pacific Crest Trail, there’s an abundance of trail angel generosity surprises.

A few that come to mind include Broken Toe’s encampment where he parked for two weeks at Hart’s Pass just to greet SOBO’s with a warm fire, a fresh vegetables and good hiker beta. Also Big Lake Youth Camp that made it part of their mission to help us hikers with kindness so deep they set aside a building just for us to hang out replete with fresh baked cookies, showers, even a box of second hand clothing to change into while our dirty ones were being washed.

In California, it was a string of pearls of hospitality like Casa de Luna near Green Valley, and Hiker Heaven in Agua Dulce, owned by otherworldly souls willing to open their homes and back yards to hundreds of smelly hikers over literally decades.

By far, though, one of the strangest places I came across was Hiker Town. It’s smack dab in the middle of tumbleweeds, jumping cholla cactus and Joshua trees, mountain lions stalking and rattle snakes sunning in the middle of the trail of Southern California desert. I reached it after walking the California aqueduct, water closed in by concrete rushing below me and only available for my bottles at a single faucet before an 18 mile stretch in the blazing sun.

I had not heard good stories about Hiker Town, mostly that the owner is known to ask inappropriate questions and come on strong to young female hikers. He wasn’t around when I arrived – or if he was, after taking one look at me, he must have decided not to bother. I felt reasonably safe especially wince my friend Callum was right behind me on the trail.

Hiker Town’s sprawling acreage abuts a busy highway. There’s one modern house shaded by trees with a spiffy little patio, but all the others are tiny cabins, seemingly left overs from of a B movie of the Wild West variety. There’s a bank, a sheriff’s office, a school, the mining supplier, even a brothel.

I wandered about and finally found Bob building the outdoor shower. Wisps of hair on his grown and full, neatly trimmed gray beard, Bob appeared harmless enough in a black T-shirt, jeans and sneakers, far more appropriate for the Venice boardwalk than this dusty place. A videographer who won three Emmies for his work on Columbo and The Rockford Files, Bob has lived here over a decade and greeted thousands of hikers. When I asked him how he liked living in the desert, he replied resignedly, “It’s hot in the summer and cold in the winter.”

Bob doesn’t move fast, but he got me quickly settled in my own private cottage, one without designation aside from a sign reading, “If you’re lucky enough to be at the beach, you’re lucky enough,” underscoring my Venice Beach association. The space was barely big enough for a brass bedstead holding a lumpy mattress and a creaky old chest of drawers missing most of its knobs. Good enough for this thru-hiker, I decided, and dumped my stuff heading to the newly constructed outdoor shower before the sun went down and the air chilled.

Callum arrived just as I dried off and was ushered to his own cottage and shower. Bob drove us (without incident) both fifteen minutes up the road to the convenience store for a mini resupply and dinner. It was dark by the time we returned. Three other hikers had arrived to stay, along with a couple I’d met on day two back in Washington. We sat out on the patio to share a soda before they head into town.

“Why not just stay here?” I asked before they left. “We’re right on the trail.”

They repeated the disturbing stories I’d heard, and, as if to put a finer point on the situation I faced, asked if I’d looked under the bed yet. What could possibly be under the bed!? They gave few clues before their ride arrived but I wan’t about to look all by myself in the dark.

So I headed to Callum’s cottage, who was already in bed at 7:30 since everyone knows that 7:30 is “hiker midnight.” Even so, sweet Callum obliged bringing his headlamp. He got down on his knees on the dusty wooden floor to get a better look. “Ah, there they are!”

“Black widow spiders. But don’ worry. They won’t hurt you unless you agitate them.”

I never got around to asking Callum how many spiders were calling my ned home, though I realized he was right. Those black widows had zero interest in me. So far on this hike I’d walked in a snowstorm, been visited by a bear, stirred up a rattlesnake and walked a helluva long way without incident. I was pretty sure the local residents were going to leave me alone.