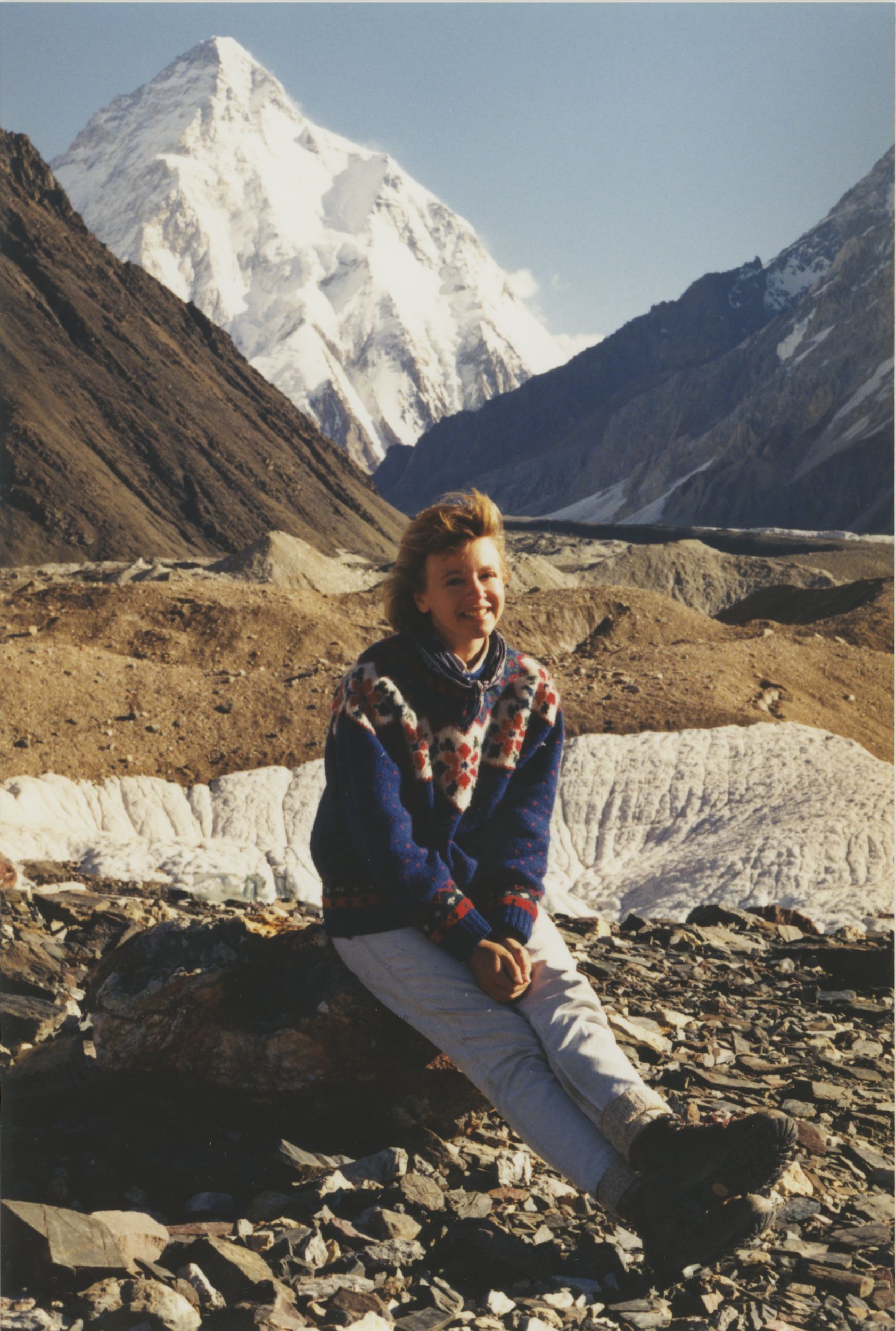 In the throne room of the mountain gods

When the news came that K2, the so-called “Savage Mountain” was finally conquered in winter, I was especially ecstatic that the successful summiteers were those often treated as “hired help,” Sherpas, who normally park their ambitions at the door in order to put wealthy clients on top of the world’s highest mountains. But this time, two teams of climbers went up, shoulder-to-shoulder, singing the Nepali national anthem and touching the top as one, showing the world that with team-work, focus, selflessness – and luck with the weather – they could make “the impossible possible together.”

I’m reprinting this blog post chronicling my adventure walking to K2 basecamp in the late 1990s when I got only within viewing distance of this monster peak, awed by its beauty and ferocity.


Forgive me if this story is very old. But the mountains are even older and not much has changed in the ensuing years.

It was the mid ’90s when my dad was called up to serve at the American Embassy in Islamabad, Pakistan. I was with him in Germany when he got the call and to be honest we weren’t precisely sure where Pakistan is.

Though I was familiar with some of Pakistan’s history – it’s prime trading position on the silk road, the clash of civilizations of Greek and Buddhist in the Gandhara period, the rise of Islam, India as Britain’s Jewel in the Crown and the violent partition after independence that created this separate Muslim country.

I knew right away I wanted to visit, and I spent a glorious two months exploring the stomping ground of Kipling in Lahore, watching polo in the Hindu Kush, meeting Kafiri women, driving up the Khyber Pass outside Peshawar and sneaking into Afghanistan.

But my biggest goal was to see the highest mountains in the world, the “Throne Room of the Mountain Gods” in the Karakorum.

The Karakoram is part of the Himalaya uplift where the plains of the Indian subcontinent smash into the Tibetan plateau. The Himalayas may have Everest, but in the Karakorum, a whole bunch of big mountains line up in the largest convergence of 8000-meter peaks in the world.

After many of days hard walking, you arrive at an intersection of glaciers with a 360-degree view named for the Place de la Concorde in Paris – in English, Concordia. Look left, and there’s K2.

From Germany, Manfred and Charlotte were traveling overland from Strasbourg to Japan. They’d begged on to a private trip arranged by a couple from the Netherlands, Bas and Engele, who invited them along simply to improve the food situation. More people going meant more money for porters to carry the food. If I went, it would appear, we could have oatmeal every morning.

My trek took place way before 9/11 when so much more was possible. I was young and trusting – and had no plan whatsoever once I arrived in Islamabad – so I linked up with some people I met in the high mountains near Gilgit on my first week in country.

That’s Nanga Parbat the “Killer” mountain, 9th highest in the world. My dad took that picture, not me. Perfect weather at the airport didn’t tell us a thing about the skies over the Karakorum. The mountains rise to nearly 30,000 feet, a comfortable cruising altitude. If you can’t see the mountains, you don’t fly.

Welcome to adventure travel – usually one challenge after another. We ended up renting a van and working our way north on the Karakorum Hwy. It’s shorter to go through Kashmir, but that’s simply not possible. Though you do pass through the Swat Valley, which is largely controlled by Taliban these days. Mostly just tribal skirmishes when I went.

Twelve long, bumpy, interesting hours on sometimes pencil thin roads with no guardrail. Or was it thirteen hours? Until we finally arrived in Skardu. At 8,200 feet, it’s a wild-west of a fort town right on the Indus River. Beautiful, dusty, a little cynical having seen it all. It’s the place to get supplied and acclimate.

It’s also here where you get your permits in order. Lots and lots of showing your passport in this part of the world.

And from here, it’s another jeep ride, interesting, beautiful, bumpier and more dead slow as we came upon a section of road totally washed out and being rebuilt under us. Our unflappable – but it would turn out, untrustworthy, guide was from Hunza and had us call him Imam. Our fearless leader.

The road ends in a place called Askole.

And that’s where the walking begins. It kind of came as a surprise after all that long driving. You just got out and start.  And it was here that the haggling was done with porters – how many would come, how much would they carry, and what food would we’d take.

At Askole, I met a team returning from the twelfth highest mountain in the world, Broad Peak. They had just placed a flag on the summit from their brand new country: Bosnia-Herzegovina. Then they gave back by removing tons of trash and human excrement from the mountain and glacier. I was impressed.

The first days were hot and dusty, dangerous – due to an avalanche of sand and rock right onto our trail – and headachy. You’re already well above 10,000 feet. Sodas help, and we could get them just about anywhere there were houses of any sort.

But the ‘best thing against headache’ were dried apricots. You saw them everywhere just left out on the rooftops of the farmhouses as we drove to Askole, their deep reddish-orange juice dripping off the eaves. Worked better than Diamox.

The next day had new adventures awaiting us as we worked our way up the Braldu River. It looked like milk tea – boiling milk tea. It’s considered super extreme whitewater, which is why we stayed out of the water as much as we could. We climbed up and over if possible or loaded ourselves in a box and were pulled over.

But eventually we had no choice but to cross a little stream of melt-water feeding into the Braldu. Five porters are on each side holding ropes tight so we had handrails as we stepped into the frigid, fast moving water. Imam tossed my boots across and I walked barefoot, the stones were sharp and cutting, though my feet were totally numb at a certain point.

What awaited after that ordeal were the mountains like you’d never seen. And after all that dust and boiling danger, finally grass and flowers.

At the beginning, I told you that Bas was willing to let me come along so we’d get better food. We brought eggs, the promised oatmeal, as well as a live chicken and a live goat. I wasn’t fast enough to snap a pic, but they just loaded the goat in the pulley box and sent him across.

But most days it was very simple eating – chapati and daal. Kind of a lentil/pea puree on bread. You’d wake up hearing the dough clapped between the hands and formed into flat cakes, like pizza.

The next morning, the glacier came into view – and the big mountains.

The Sirdar was our chief porter. He had an assistant and then an assortment of basic carriers – who came with us until they were no longer needed – all the food the carried was eaten, so they raced back to Askole to try and get more work.

Some were young – some older – but all thin, dressed in raggedy clothes and wearing flip flops or sneakers – and you know, they were stronger than you can imagine. I gave them a lot of my stuff before I left. They became our friends – helping us up onto the Baltoro Glacier.

Almost 40 miles long, the Baltoro is one of the largest glaciers outside the polar region. It’s mouth yawns open as you approach it, and it’s alive and colorful, moving and shifting, even singing in your ear as you lay upon it at night. Right now, we had to get up on it and avoid the crevasses.

Once on the glacier the mountains really came closer and everyone’s spirits perked up. You’re above 13,000 feet now so maybe just light-headed. The first mountains you see are the Trango Towers. They put Yosemite to shame. They rise 3,000 feet above their base to a height over 20,000 feet. Some of the hardest climbing in the world on granite, like El Capitan, but in a frigid, changeable high-altitude climate.

That night, we slept on the glacier – a frozen, shifting mattress that – in the spirit of Monty Python – goes “ping!” We had the place all to ourselves, the eerie seracs, erratics and the sunset. We spent an extra day here because it began to snow and we needed time to acclimate. You’re gaining altitude and it’s a cold night.

Just a word about the porters. They all slept in a rock shelter that likely had to be rebuilt every as the summer passed and the glacier shifted. They simply placed a blue plastic tarp over their heads and crowded in. Tough people – and kind, helping not just with your stuff, but with your spirits.

We had stunning weather – and we could see all the mountains. Beautiful Masherbrum. Only 25,000 feet high, but one of the most lovely with her little hat. She was formerly known as K1. You’re surrounded by the Cathedral group — the Gasherbrums known as hidden peaks or beautiful peak.s Gasherbrum 1 and 2 are both over 8000 meters high. In front of you is beautiful Broad Peak and to your left is the distinctive pyramid, and one of the hardest climbs in the world, the savage mountain, K2. That’s what we came for – with perfectly crystal clear weather.

After a rest day, we worked our way up Godwin Austen glacier to get a better look and catch the vibe – it’s a long, difficult, wheezing walk to the basecamp – at 17,000 feet – and a collection of climbers preparing for their attempts.

The Gilky Memorial is made up of tin plates and pans mostly, with names of those who died on the mountain hammered in. Gilky was an American climber who developed HAPE and had to be carried down from a very dangerous altitude. He slipped out of his bier and fell to his death, but some believe he sacrificed himself purposely to save his team.

I found it all deeply emotional – as did our porters who wanted to get out of there as fast as possible – right when we arrived, the camp was radioed the news that an American had fallen. A fixed rope gave way – his body was never found as far as I know. His name was Steve. While we drank tea, a Chinese team lost someone to HAPE. One in four won’t return attempting K2.

We headed back to Concordia and needed to touch life and joy again – so we all had our hair washed! That was the night before my trip fell apart. I did this trip on the cheap and as a meal-ticket add-on, so I took a risk and at the end, our group splintered. Charlotte got altitude sickness, Bas took my rope and went with his wife and Imam over Gondogoro La. I ended up pulling together a group of porters and hooking up with a French group led by a guide from Nagar named Shafi Ahmed to get Charlotte off the glacier and out of danger.

I did get home – and I got there, too – one of the most staggeringly beautiful places in the world.

You need a visa to travel in Pakistan

It takes about 25 days, the best time to go is late May to early September

Consult with the State Department before traveling

Wear good boots with ankle support and use trekking poles

and prepare for adventure!