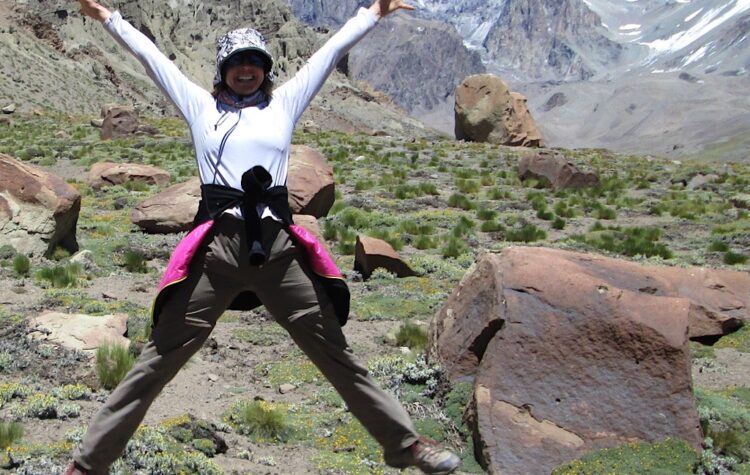 In January 2014, I attempted to summit Aconcagua, the highest mountain in the Western Hemisphere. At Camp One, in the middle of the night as snow accumulated outside my tent, I developed HAPE, a deteriorating condition where fluid accumulates in the lungs and can be deadly within hours.

Getting to the top is optional. Getting down is mandatory.

In the parlance of the mountaineer, I failed.

But in the language of the questing adventurer fully engaged in the game, my harrowing leave-taking of that snowy pile of rock was a success.

“The summit is optional, the descent is mandatory,” were my husband Richard’s parting words at Minneapolis-St. Paul International Airport two weeks ago, and they echoed in my fogged, lethargic brain as my lungs dangerously crackled and oozed, my strength dwindling precipitously, ever accelerating in a dance with death so unromantically called “HAPE” — High-Altitude Pulmonary Edema.

Was it Liszt in my head on that dark, icy morning as moans and coughing woke me? More likely, it was not a vision of my own demise but rather the promise of the rest of my life calling me — begging me — to return below the clouds and save myself.

“Evacuation” is a funny term implying speed and efficiency. Mine was a chaos of clothes found, boots pushed on, a rag-doll body forced to stand.

I then slowly put one foot in front of the other and walked thousands of feet down and down, tied by a short rope to a lovely Argentine guide who never stopped urging me, “Good job, Ali! You must walk now! Good job!”

What is it, I ask myself, that sends me to such risky places? Is it a testing of myself, or a seeking of indescribable vistas or is it maybe a desire, that in utterly stark and danger-filled places, I will somehow find who I really am and thus carry a strength and peace into the ordinariness of my life?

To these sorts of questions, George Mallory famously quipped about his obsession with summiting Everest, “Because it is there.”

The reasons I give shift over time and can’t be pinned down. Perhaps I simply don’t know why.

As I slowly recovered in Mendoza’s vineyards at the foothills of the Andes, I was surprised and a little amused that with the end of the adventure I sought in Argentina, I was thrust into a new one. But certainly not the kind to write books about or to develop an awe-filled following. It’s way more internal and private.

I know I’ll return to the wild and unknown one day; that’s a given. The brute strength, the grit, the confidence and determination and the hopeful attitude it takes to reach any summit, are skills I already possess.

In this case, I’d venture to add I picked up a new one – a demure graciousness that allowed me to decline the invitation to my Totentanz.