You have to have confidence in your ability, and then be tough enough to follow through. —Rosalynn Carter Another glorious rest at Sandy’s, though I’m still dreaming throughout the night that I’m walking. I wake up from these dreams surprised I haven’t moved at all. Which is a good thing since it’s bacon and eggs and cheesy grits for breakfast and far too much coffee. Sandy and I hang on the couch with her precious dogs – the skinny mop-top who flops, black poodle Oliver and the solid tank of a dog-shaped-like-a-penguin with silky fur, the doberman? chihuahua? mix, Hoppes. I got a reasonably decent fill of fur therapy, the two swapping positions between us as we gabbed. I am incredibly lucky to have met Sandy – and frankly all the gals this summer, Laura, Holly, Maria, Andrea, Laurie, Jayne, women I bonded with deeply. 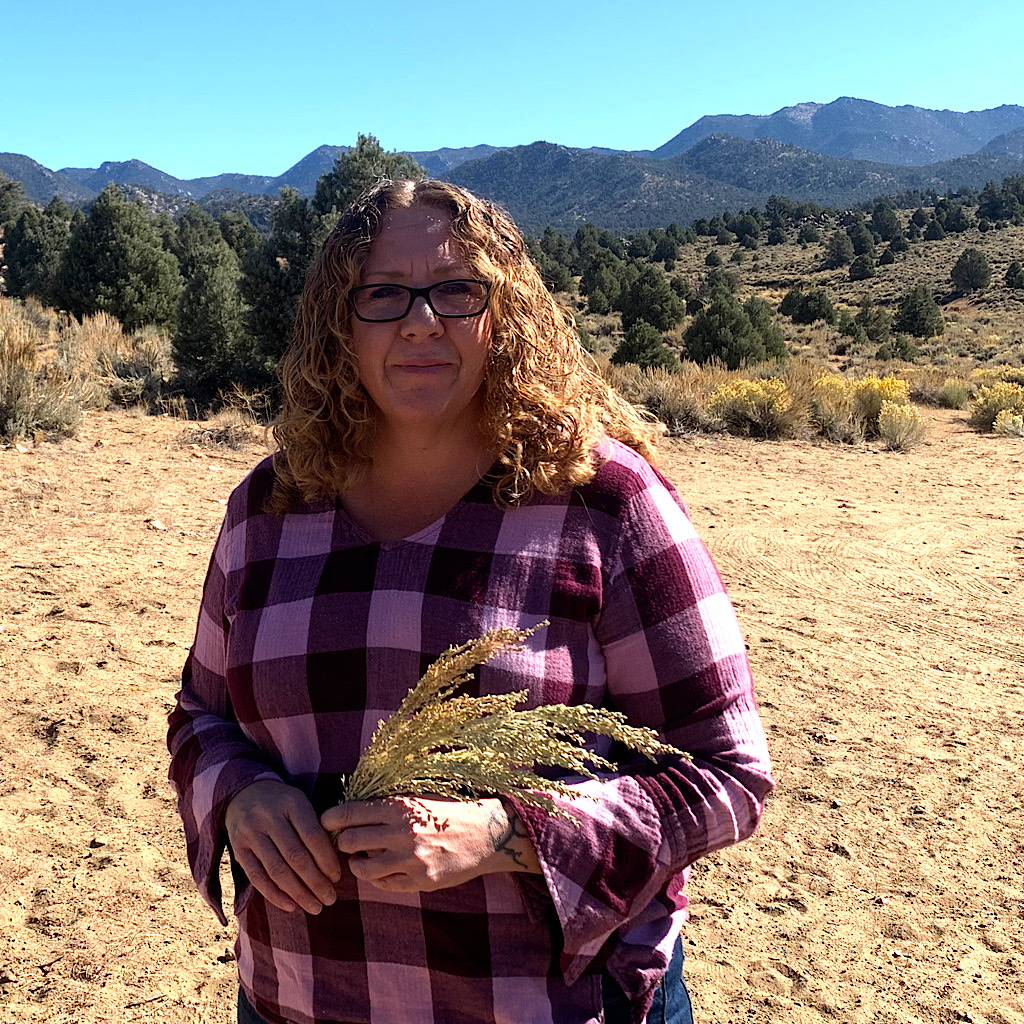 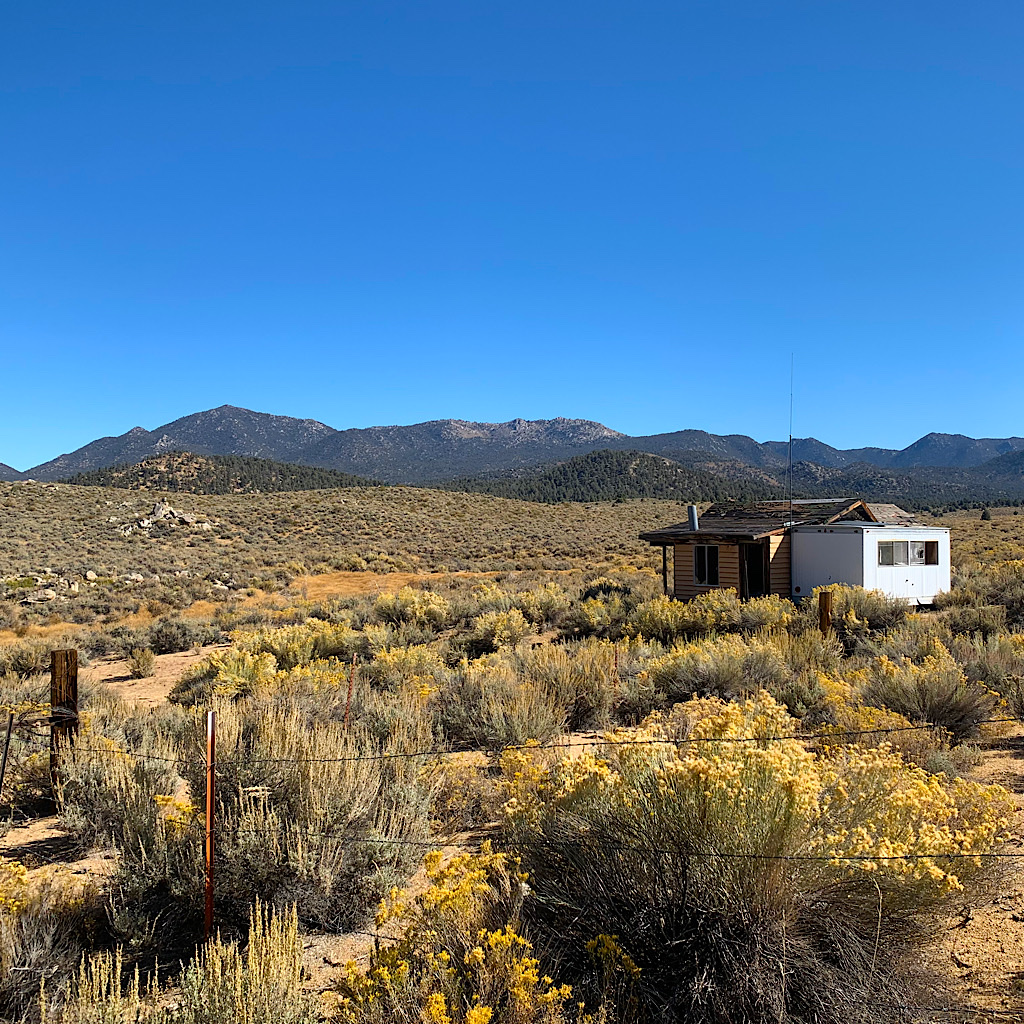 I pack Olive Oyl and say goodbye as the gabbing continues all the way back up to Kennedy Meadows, Sandy and I both agreeing how we are attracting and attracted to more positive people in our lives while ditching the people who drain us or bring us down. She tells me that’s why she’s a trail angel because most of us hikers are full of life, interested and interesting. It’s energizing to be part of the trail world. I tell her I can be a trail angel screener suggesting she help out a woman who posted on their facebook page that she’s bussing to Ridgecrest to get herself to urgent care for her ankle. Sandy won’t be bored once I leave, that’s for sure.

We pass the “really good fresh jerky 30 miles” sign, then head to the narrow road that snakes up a canyon. The desert disappears as Joshua Trees in a cluster dot the mountains. Then they disappear giving way to our creepy skeleton trees. We pass Yogi’s store and the big ice cream cone that’s seen better days and head towards the trail. I convince Sandy to give the Domeview Road a try, a dirt road – well, really sand – with a few ruts and stones. It saves me repeating a few miles, but she’s reluctant not wanting to get stuck. A man outside his house where she turned around the one other time coming down here says it’s no problem, so we continue. I suggest she turn the car facing out before getting out, in case we have to push it, but things seem doable. She collects some sweet sage and we open the rudimentary barbed wire gate and kind of air-hug over sharp metal, hoping to catch up once I get to Tehachapi and then, I’m off. 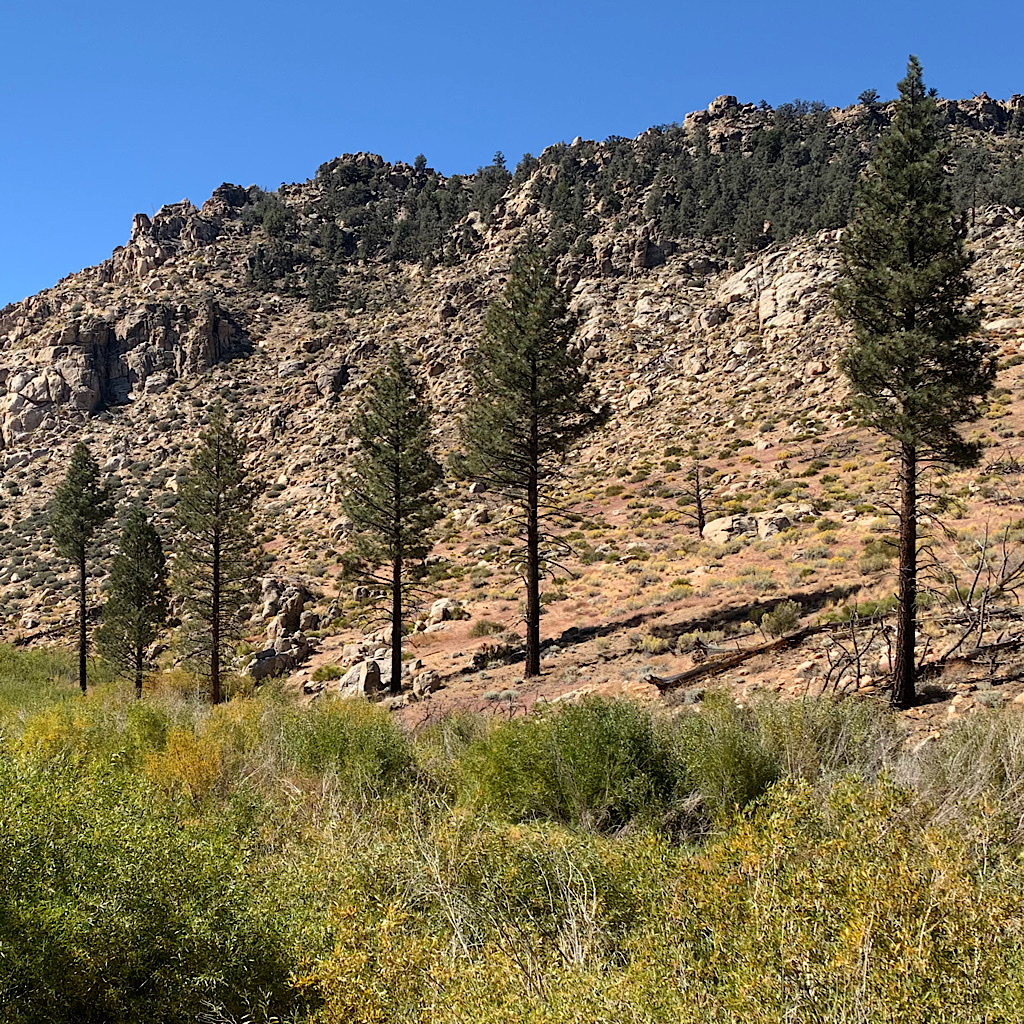 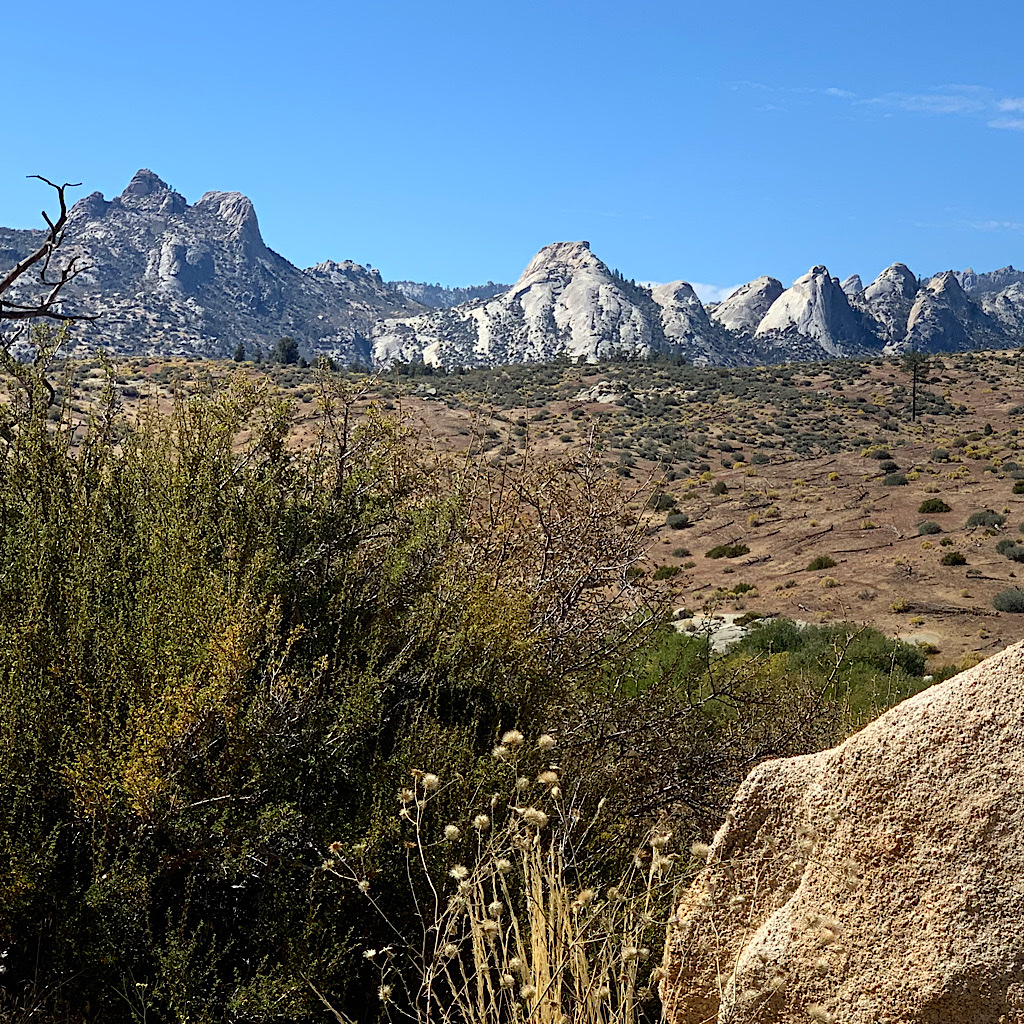 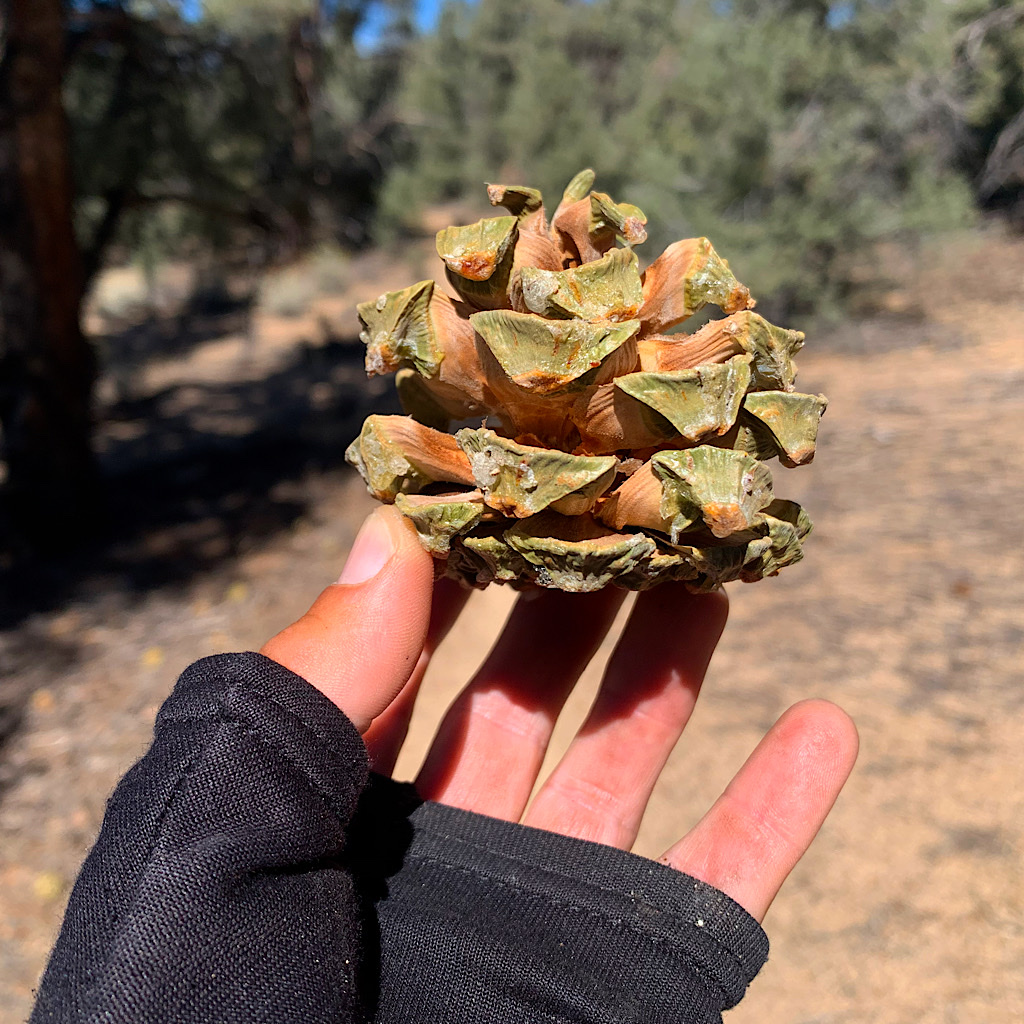 It always feels a little odd walking after a break, and this was the longest one yet. My pack is lighter with the bear canister and smaller, too. I pass a few houses then I’m all alone in this dry, wide open, very ‘wild west’ looking place. A few ponderosa pines grow tall, but there’s a new pine with rough, sappy bark and long, graceful needles. Its cone is small, green and full of sticky sap. I just have to touch the needles which feel soft one way and sharp the other. New birds sing a cheerful song, alighting on a branch to spy my approach, then flitting away. I gather water at a spring and it tastes a little muddy, but I drink it down knowing there will be no shade this afternoon.

Ahead are huge granite domes, or maybe I should call them cones for their more triangular shape sticking up in the air at different angles. I feel I’m back in Yosemite or some clever fantasy-film set designer’s creation. I never get very close to these astonishing mountains, but I see them for a long time framed by huge sage bushes and tiny pink flowers, long dead trees and robins egg blue sky, a sky slowly filling with clouds.

I hike around the flat part of this valley, possibly because it’s filled with water in the spring. The trail does come to a spring, dry now across the trail, so I follow the clues, spotting an enormous poplar which leads me to the place water bubbles up from underground. I ensure I drink enough with my snack, and take some too with a 2,000 foot climb ahead of me and ten miles to the next spring. 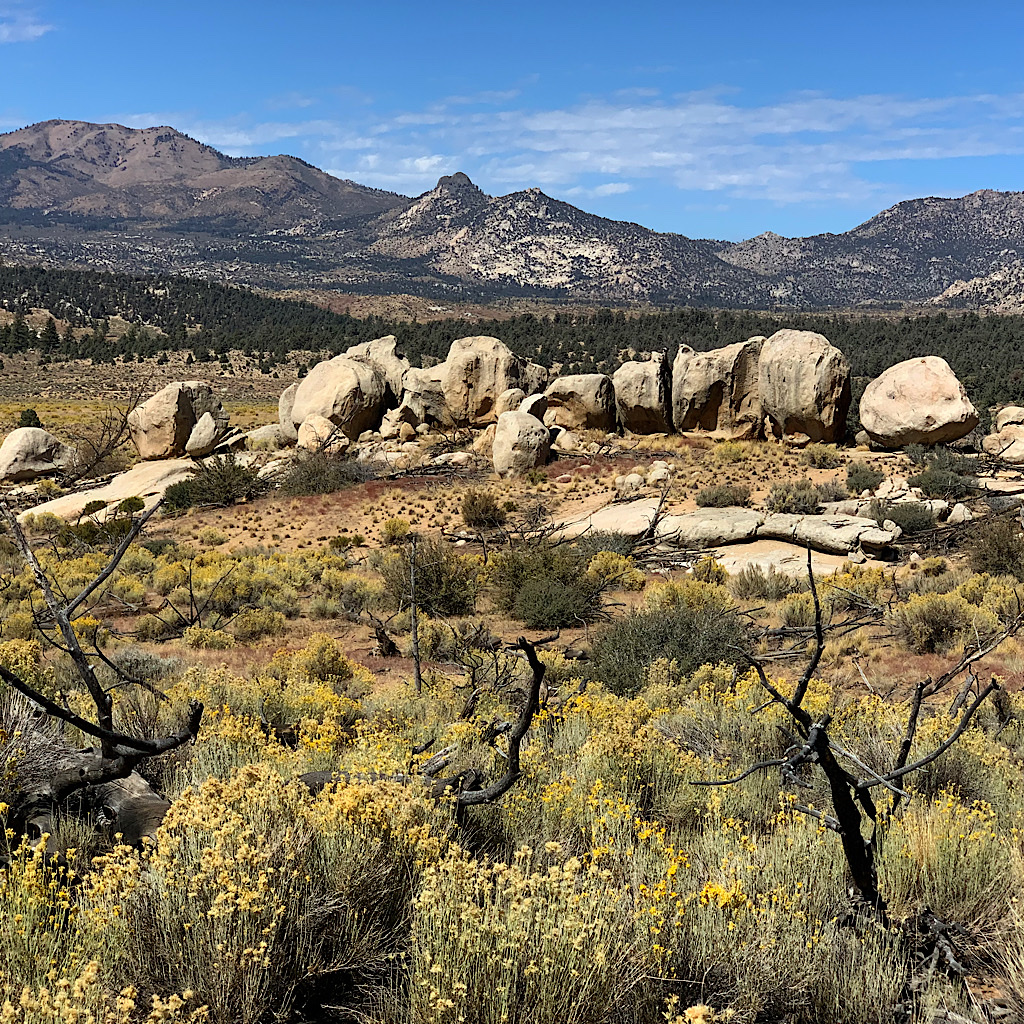 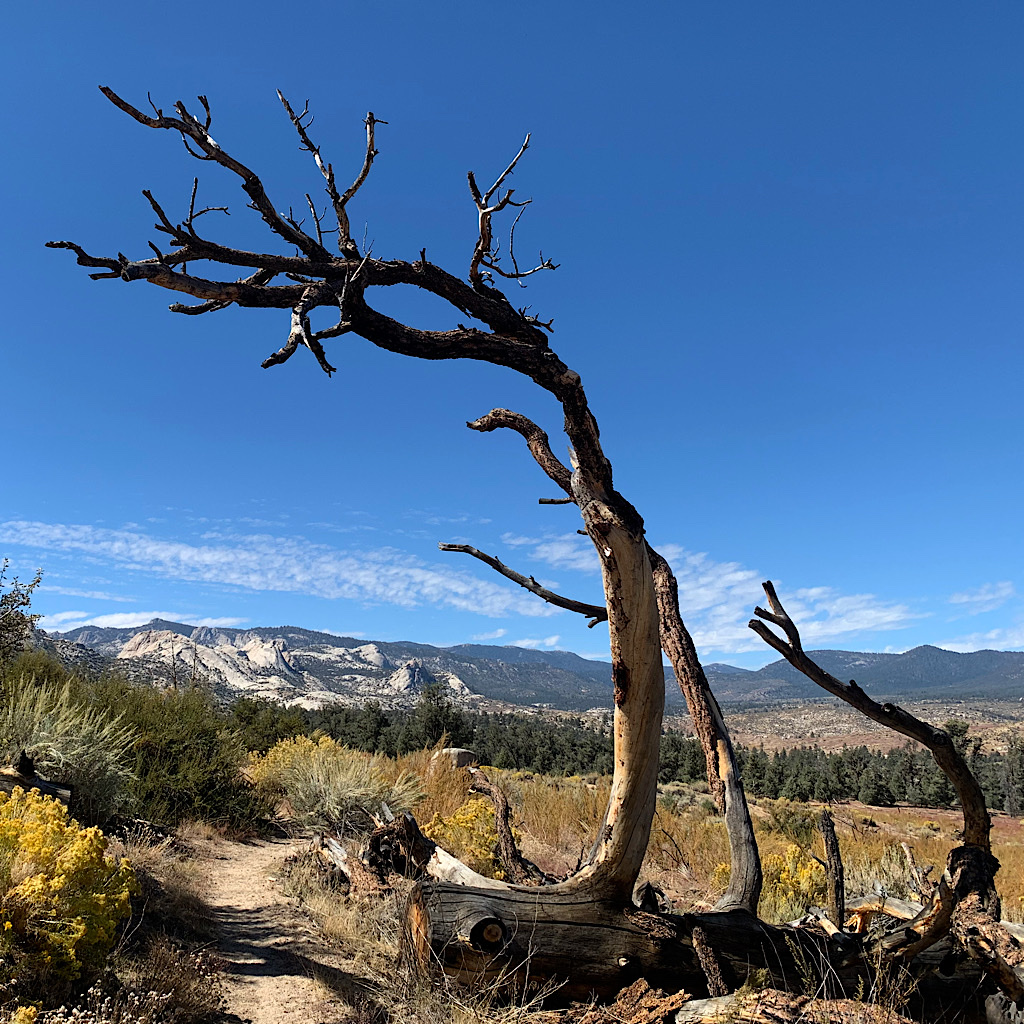 I mix in electrolytes from Germany that Ghost in the Machine shared with me before we parted. She warned me it doesn’t taste good, but it’s not so bad. The sun is intense, but wind keeps me cool as I begin my ascent, following the canyon that produced this water by sidling its right side.

It’s steady, but a long way up out of Rockhouse Basin, each time it appears I am cresting, a new hill appears. I pass exposed rock, a slate of many colors. It pings when I walk on the broken shards. It’s treeless, but that counts only living trees. Many skeletons stand on these austere mountains, burned, starved, shaken, but standing as mute statues seeming to comment on the beauty I leave behind me which becomes more grand every step I take. I’m told I can see Whitney from here and I think I see his bold towers rising far in the distance. I am taken in by the roll of my mountains folding into the canyon’s crease, my fantasy-cones now below me as I keep rising.

Dried flowers quiver in the wind, I touch huge seed pods that rattle like a beaded curtain. The clouds don’t threaten me, but I wonder if the Sierra will see weather. They stretch out towards Whitney in rows. It’s a long way up as I trace the mountain’s shape, in and out and around, finally meeting a dirt road and heading over the top to a new valley. I drink the remaining water then move down where my new pines show up again as well as cedar and oak. I pushed the time, and the sun begins to set, turning the mountains ahead bright pink. To ensure I have water when I decide to stop, I collect it at Fox Mill spring where a lovely trickle falls – and fill my bottles. It’s only a few more miles to an area with flat spots, but darkness comes fast now and I strain to see as I descend, perhaps finding something sooner. The waxing gibbous moon looms like a juicy grapefruit wedge, shining so bright, I don’t need a light. Crickets begin their high pitched trill and an owl hoots. I haven’t see a soul all day, but at the dirt road are a few tents. I set quietly, yet ‘Bear Box’ comes out of her tent and greets me. She really is lovely, asking if I need anything – chocolate? We both laugh. She assures me there’s water but watch out for poison oak! Another hiker arrives and quietly sets, using the red light on his headlamp.

It all feels soulful and relaxed as I cuddle in, happy I kept my warm bag with the tiniest nip in the air and my tent lit up by the moon. A glorious day ends as I continue my journey south feeling well cared for. As Bear Box said to me, I will to you, “Sweet dreams.” 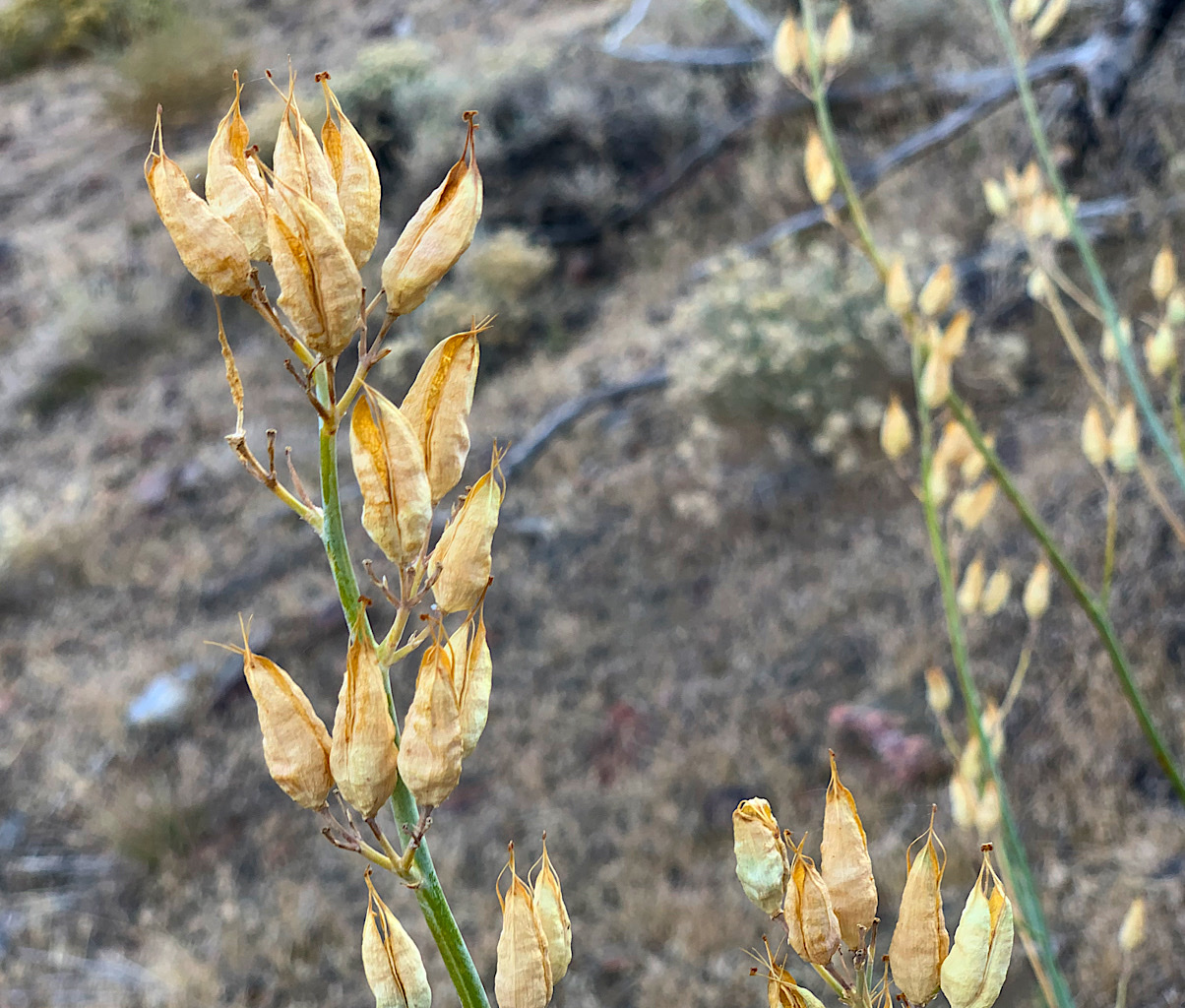