One of the most courageous things you can do is identify yourself, know who you are, what you believe in and where you want to go. – Sheila Murray Bethel 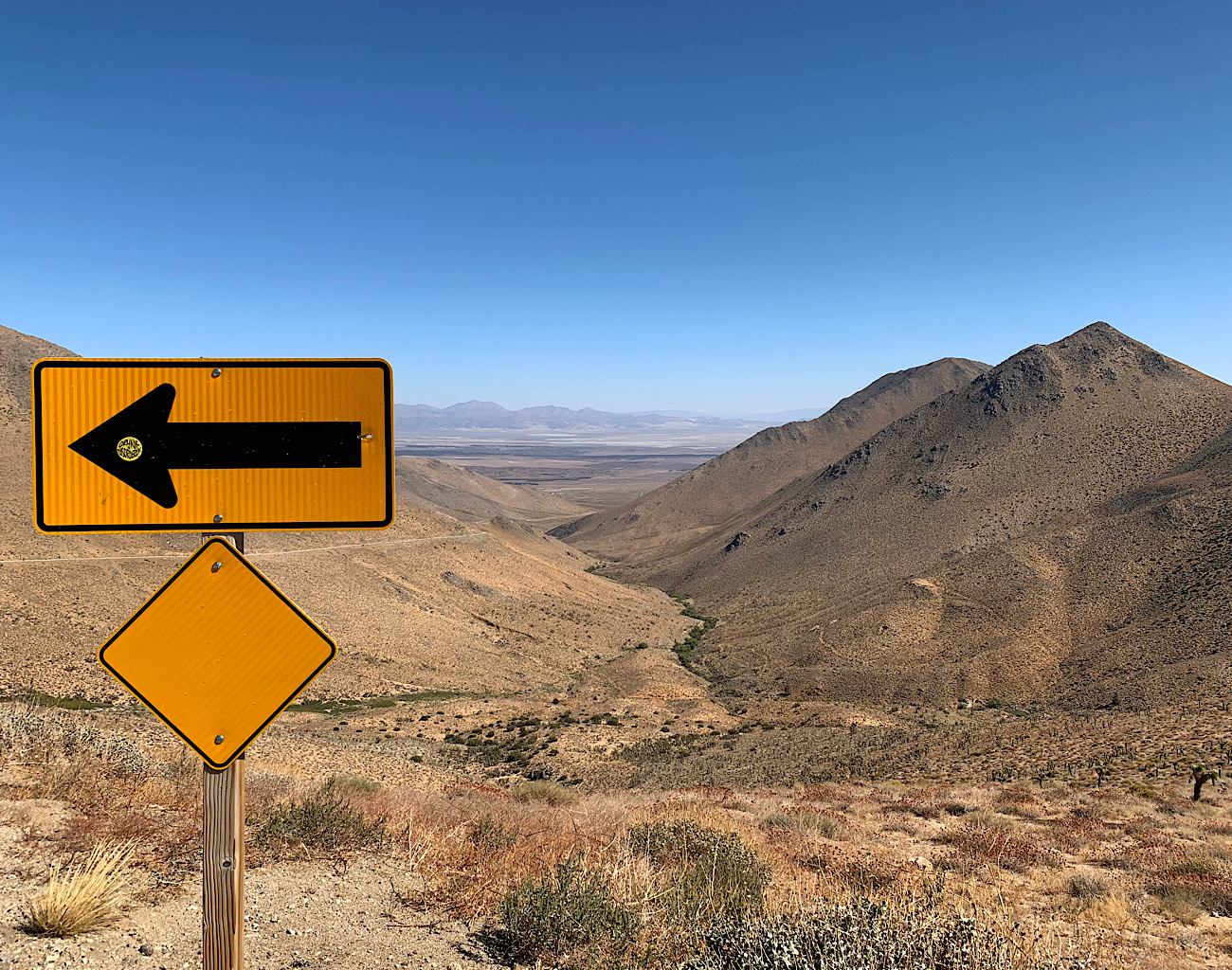 What a chill little spot, tucked in next to the weird rock formations, high above the river crashing below. The stars were out then the sky lightens to pink, but it’s coldest before dawn and I let out a small whimper. Today, I’ll be out of the Sierra on my way to Kennedy Meadows South, where a ‘triple crowner’ named Yogi has set up a store in a shipping container next to a restaurant and bar called Grumpy’s. Food and rest, in some form or fashion, awaits these tired, cold bones. 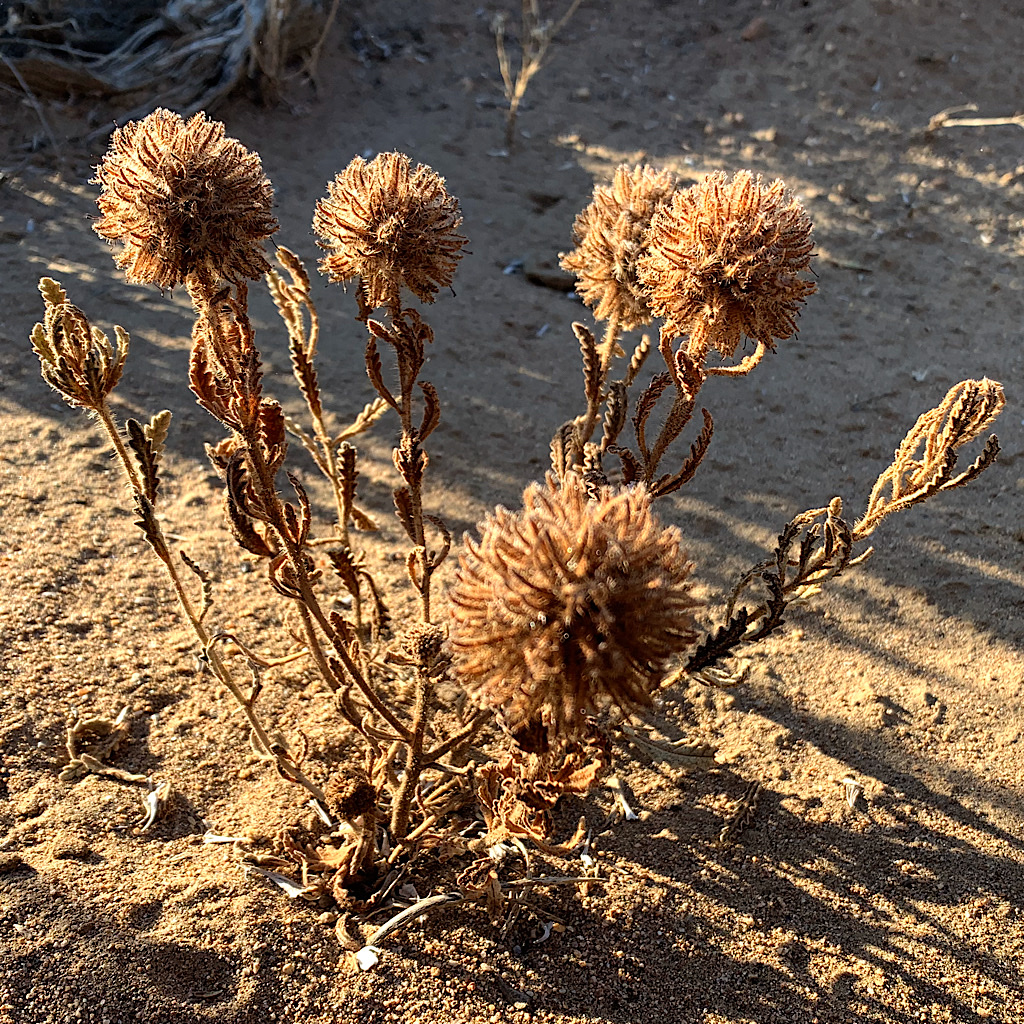 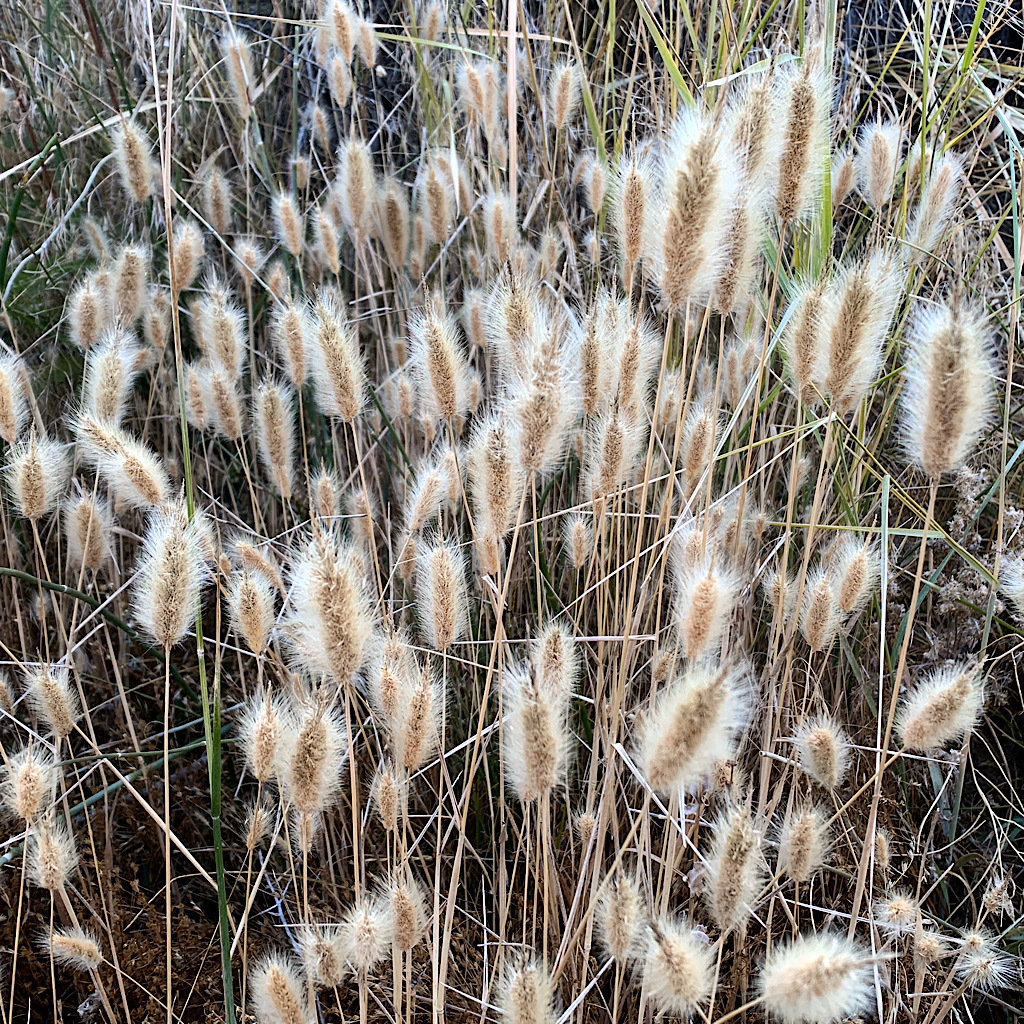 It’s only minutes before I arrive at the campground where a couple of hunters are organizing their shotguns and camo. Lots of cars are here, I imagine because it’s deer season and a lovely fall day ahead for tramping in the forest. I cross onto the first paved road since Tuolumne Meadows about 250 miles back, then promptly lose the trail. There’s a trail register at the campground and I see Moses and David signed in. Klaus is there too and I wonder if he had to skip some of the Sierra.

I find the trail again, sand covered in footprints through sedge and clumpy bushes, yellow flowers dotting the increasingly dry and open terrain. It’s full-on sun, but not too hot yet. Again, the trail seems to disappear and I’m happy I wear long pants as I push through open spaces between bush clumps. I feel tired, dirty, dried out and wonder what’s ahead, but try to allow rather than force, starting to relax into this feeling that everything will work out.

And just at that split second, I spy the trail working its way far to my left, up and over a hump, and across many dirt – well, deep sand – roads with signs warning not to dare bring that ATV on the trail. Someone knows it’s a nearly irresistible temptation, so concrete blocks have been placed in strategic locations. 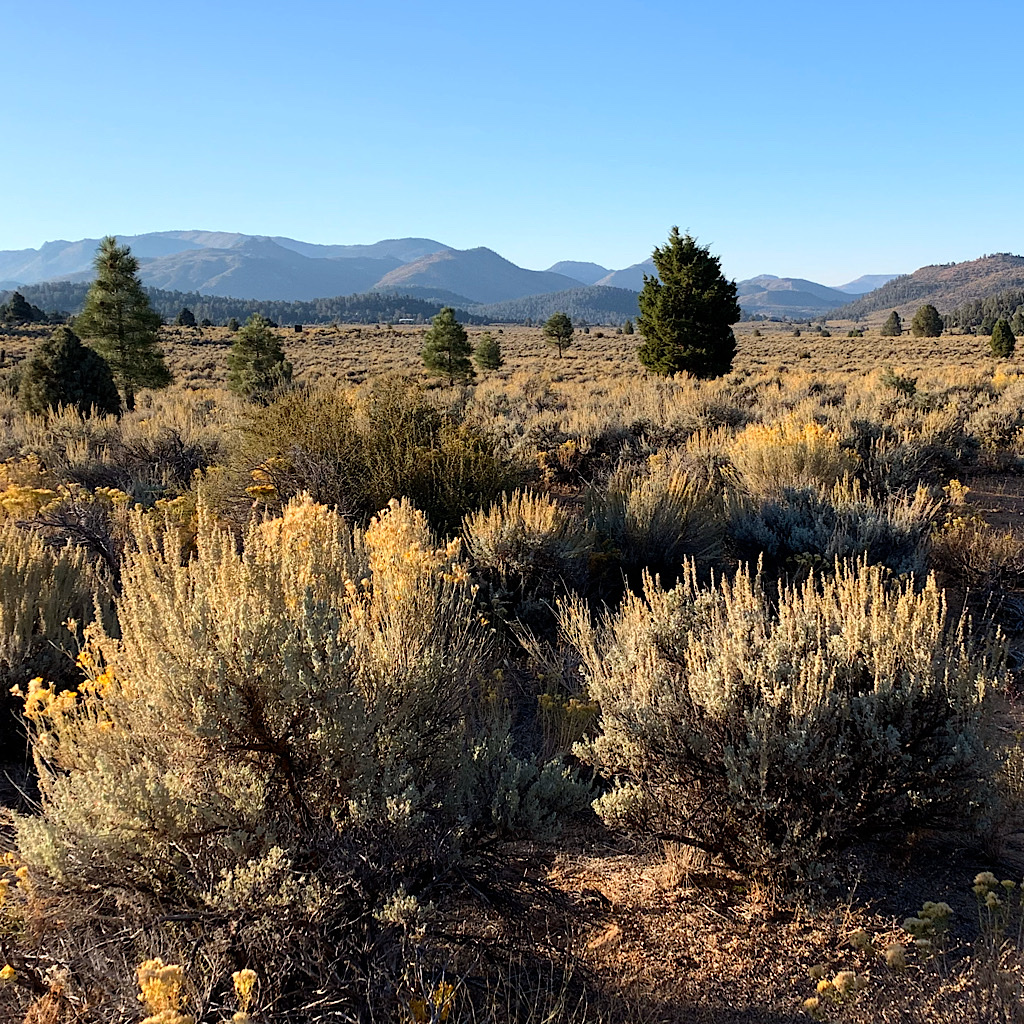 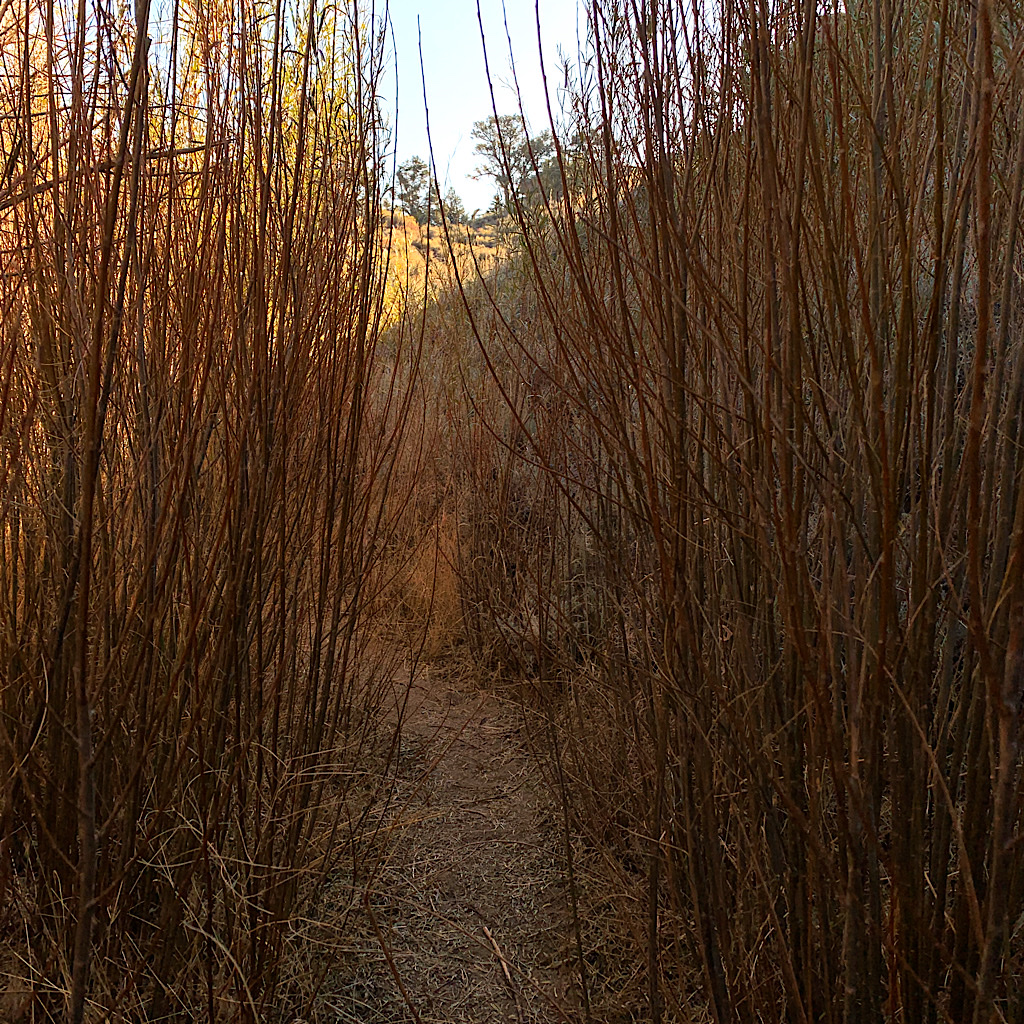 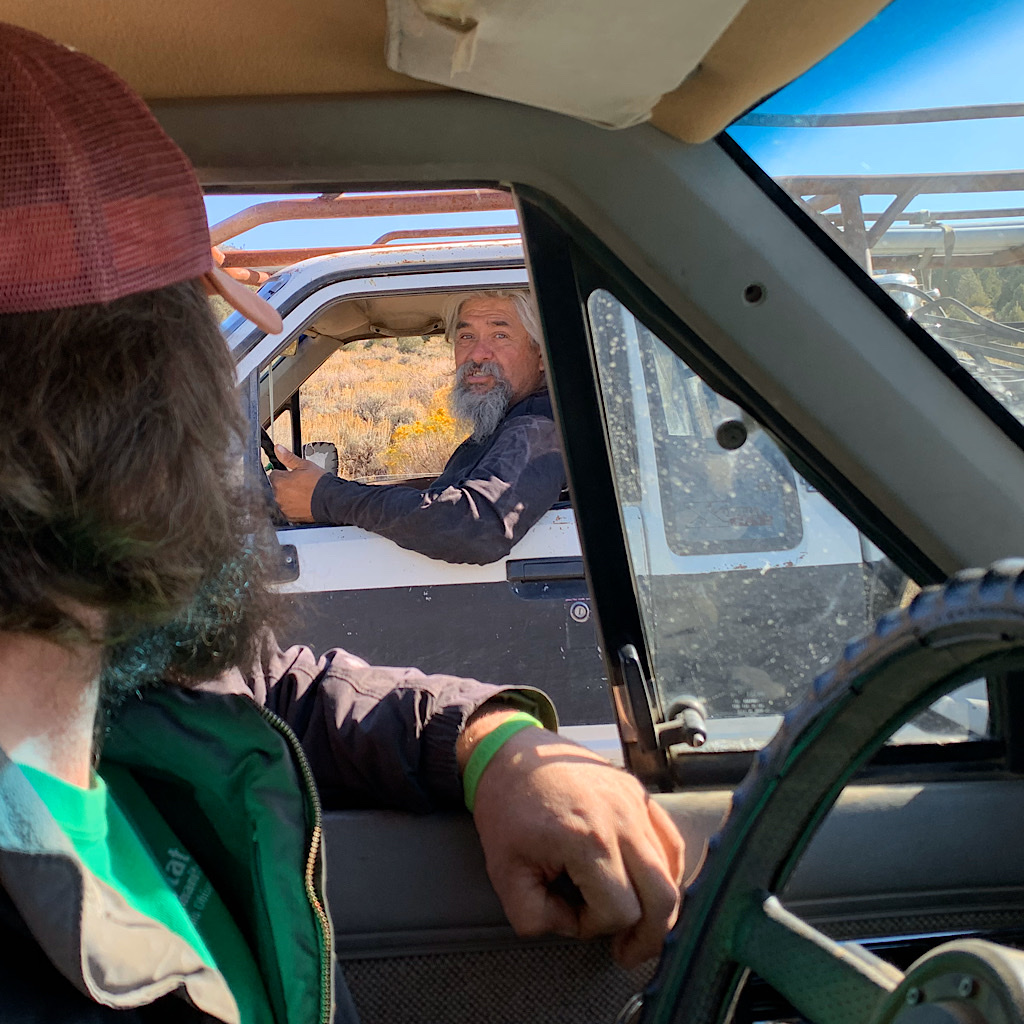 All is quiet now as I cross Sherman Pass Road and skip the general store, instead walking through tall, overgrown willow and many no trespassing signs to an unmarked junction that will take me to food and Yogi’s store. Had I studied my map a bit more carefully, I might have caught a hitch on that road, but instead I walk nearly three miles on a deserted dirt road – except for one hunter asking if I’m bee-lining to Grumpy’s. Houses appear ranging from cabins that have seen better days, lawns littered with broken down trucks, and ranches protected by remote-controlled gates. Everyone seems to be leaving, but just as the store comes into view, Jesse pulls up to offer me a lift. He’s a handyman and the passenger seat is littered with multiple pairs of safety glasses, sharp bits and bobs plus his breakfast. I hop in just as a famous trail angel named Tom pulls up to chit chat.

I mention to Jesse that I’m tired and likely need a bigger town and he offers to drive me to Ridgecrest for $50. I’m fine with that, but first want to check out the scene. Yogi is out, but her boyfriend Matt sets me up with a cold soda, wifi and a list of trail angels to help me organize a rest day. See, the universe is saying right now, we told you be patient and it will all work out!

I try to send a text to Amy who’s listed in a big organized binder as part of the ‘Walker’s Pass Trail Angels.’ I guess you can’t send a text via internet if it’s not going to the same kind of phone. So I call Richard and ask him to try. It’s a matter of minutes before Richard writes back to tell me Amy is away but says look for Sandy at Grumpy’s though I don’t see her there. 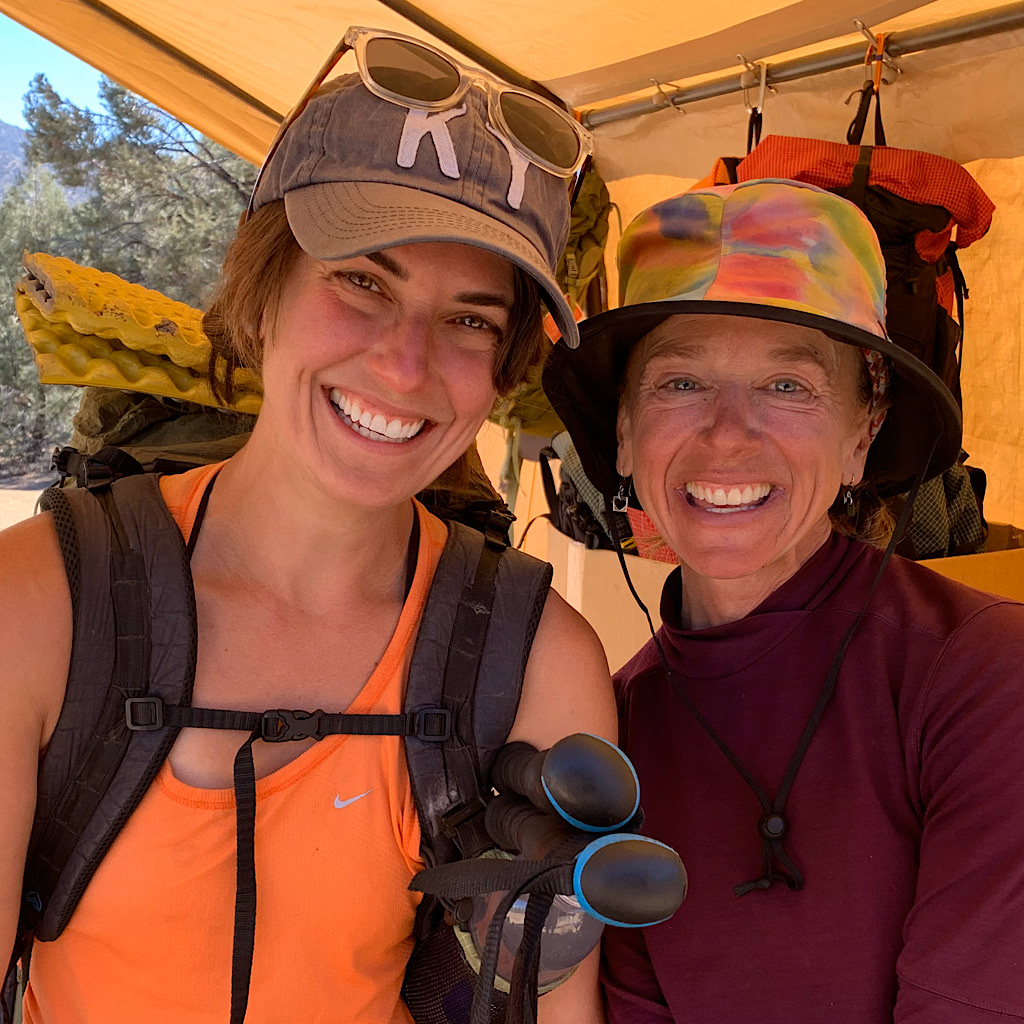 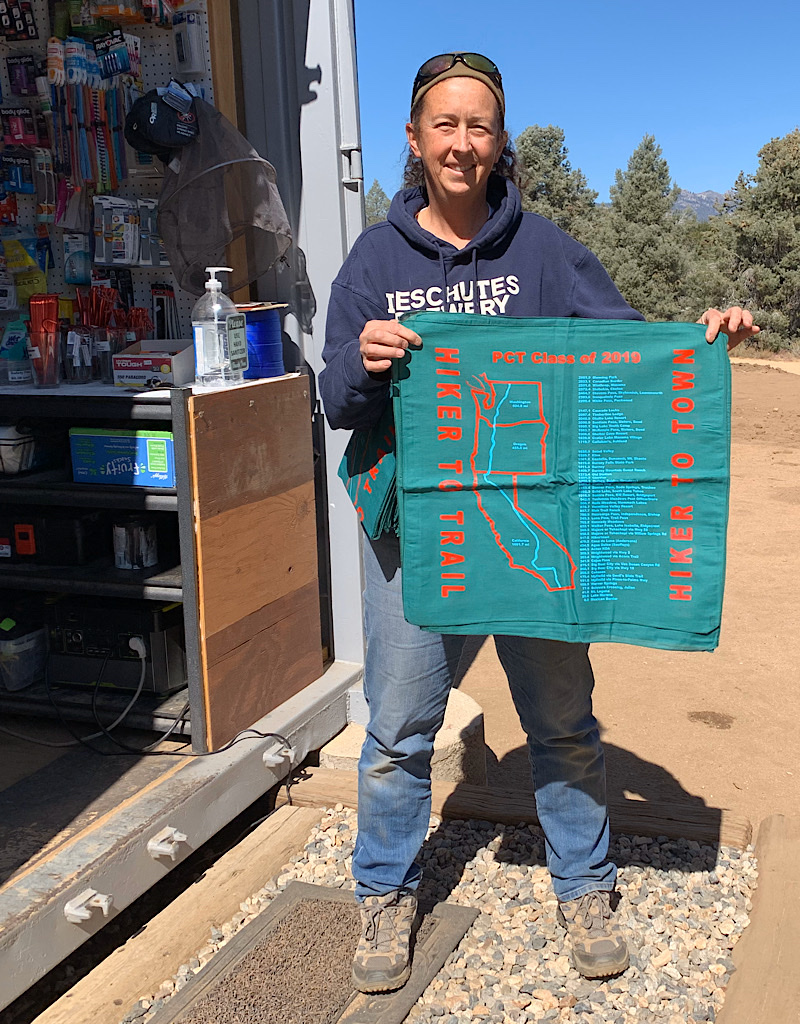 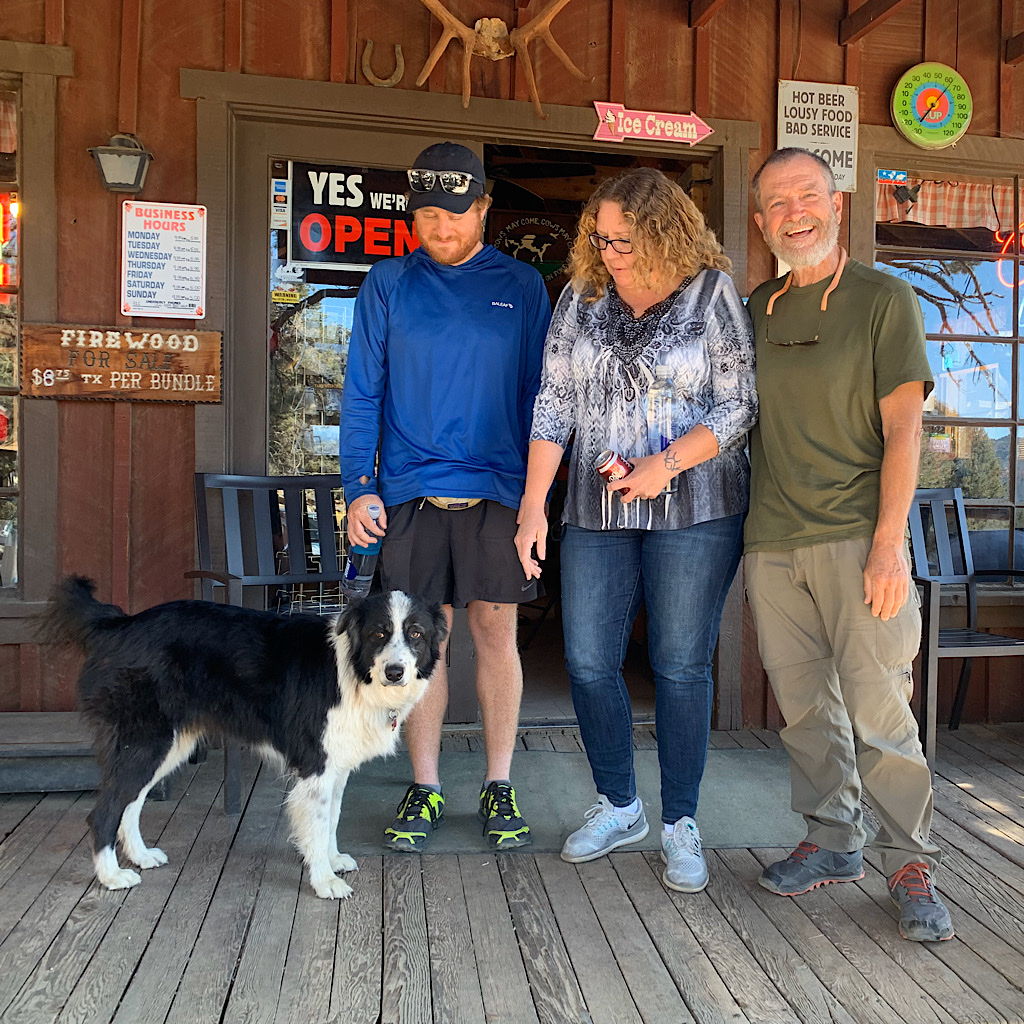 Meanwhile, two more hikers arrive, then Little Legs and the boys. We share strategies and high five our Sierra hike before a car pulls up with two more hikers. Matt says I should ask everyone and anyone with a car if they can take me to Ridgecrest. So I ask the driver, a funkily dressed curly-haired gal about my age if she can drive me. She says sure and when I say I’m looking for a hotel she responds, “No, stay at my house.” Aha! This is Sandy!

We talk briefly with Yogi who just arrives, then take the two hikers back to the trail as they share their terrifying story of hiking in two feet of snow near Squaw Valley while lightning struck the top of the ridge. They look clean and rested now, wisely jumping the Sierra section and saving it for next year. Sandy and I wave them off and head right back to Grumpy’s for a huge lunch, mine a two-patty, overstuffed burger that goes down easily with a chocolate shake.

We drive down the incredibly steep road snaking through the canyon, marveling at the beauty of tree skeletons in a burned area and the short Joshua Tree zone at about 4,000 feet in this incredibly dry, austere but magnificent place. I’m grateful Sandy knows how to downshift on this steep hill rather than ride the break as we come down to the Owens Valley, home of China Lake and the naval base, where the sidewinder missile, glowsticks and the urine cake – yup, you read that right – were invented.

Madonna and hits of the ‘80s rock us out before we arrive at Sandy’s home, a menagerie of two cats, two dogs and three fish. Of course the dogs love how badly I smell, but I’m desperate for a shower, the dirt having to be scraped off my skin. Sandy brings home another hiker called ‘Ghost in the Machine,’ a twenty-something German who looks like Haley Mills in ‘The Parent Trap.’ While Sandy works, the two of us hang out with pizza and ‘Hunt for the Winderpeople,’ which we half watch, mostly staring at our phones and catching up with the world. 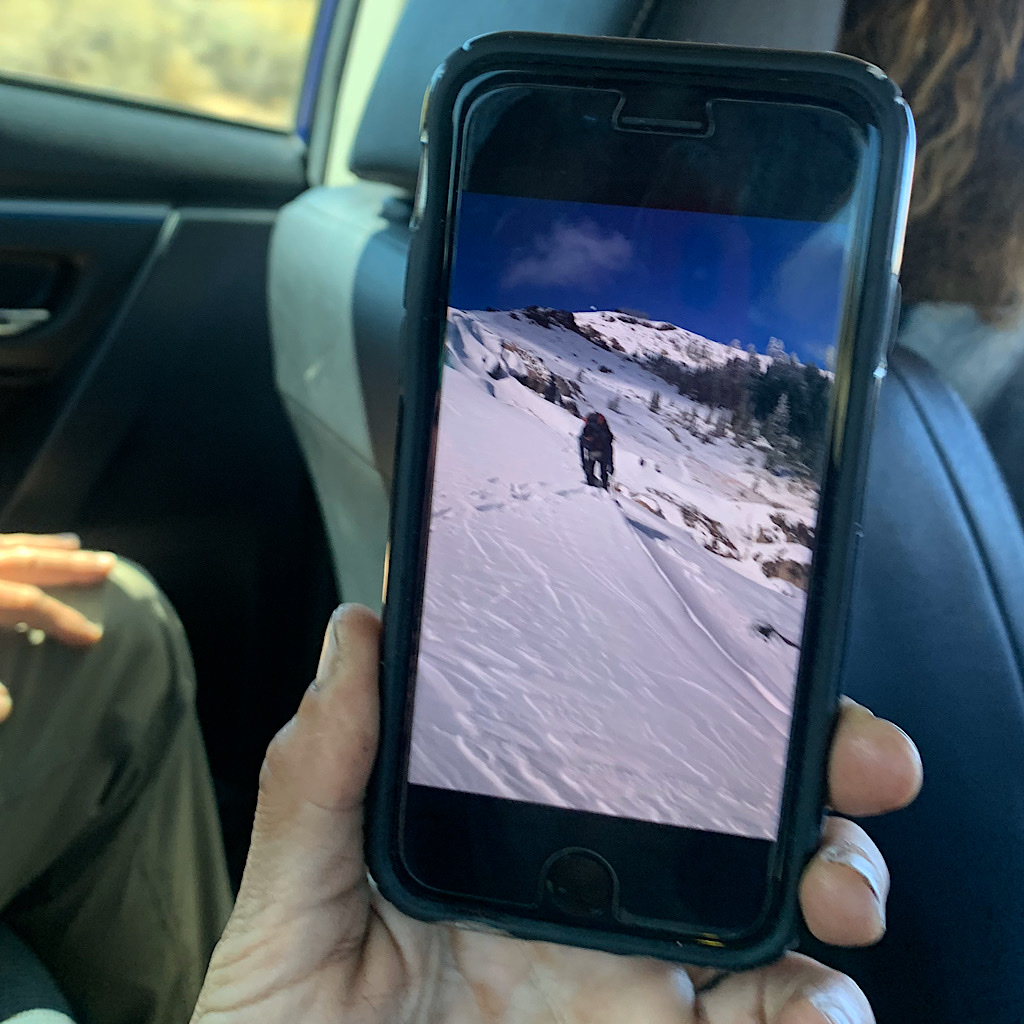 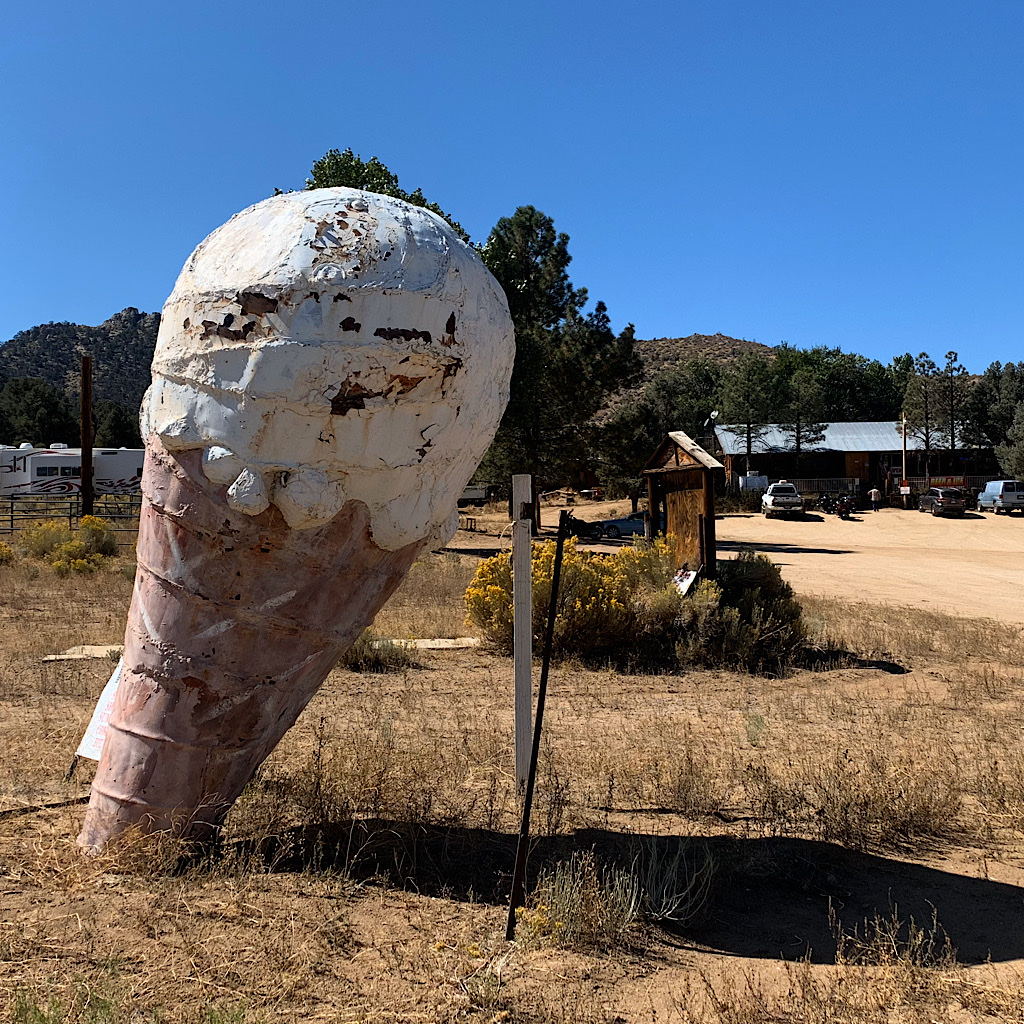 Ghost is a sometime-hiker and skips the boring parts, but she’s very organized and we strategize sending food ahead. All three of us really bond and I feel the luckiest person to land here at a home right when I needed it. Now, it’s off to sleep and a few rest days with the best dogs and new friends. 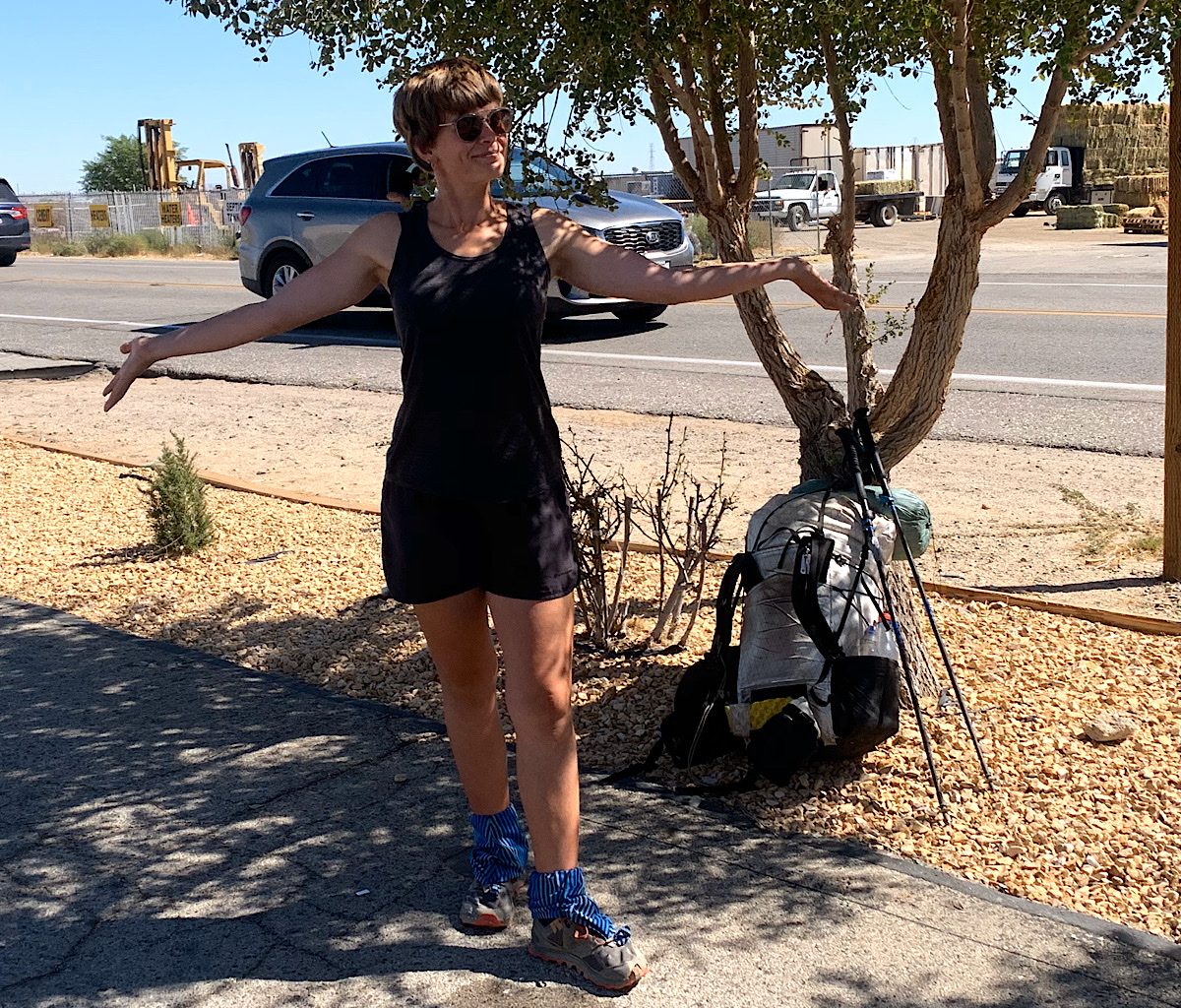 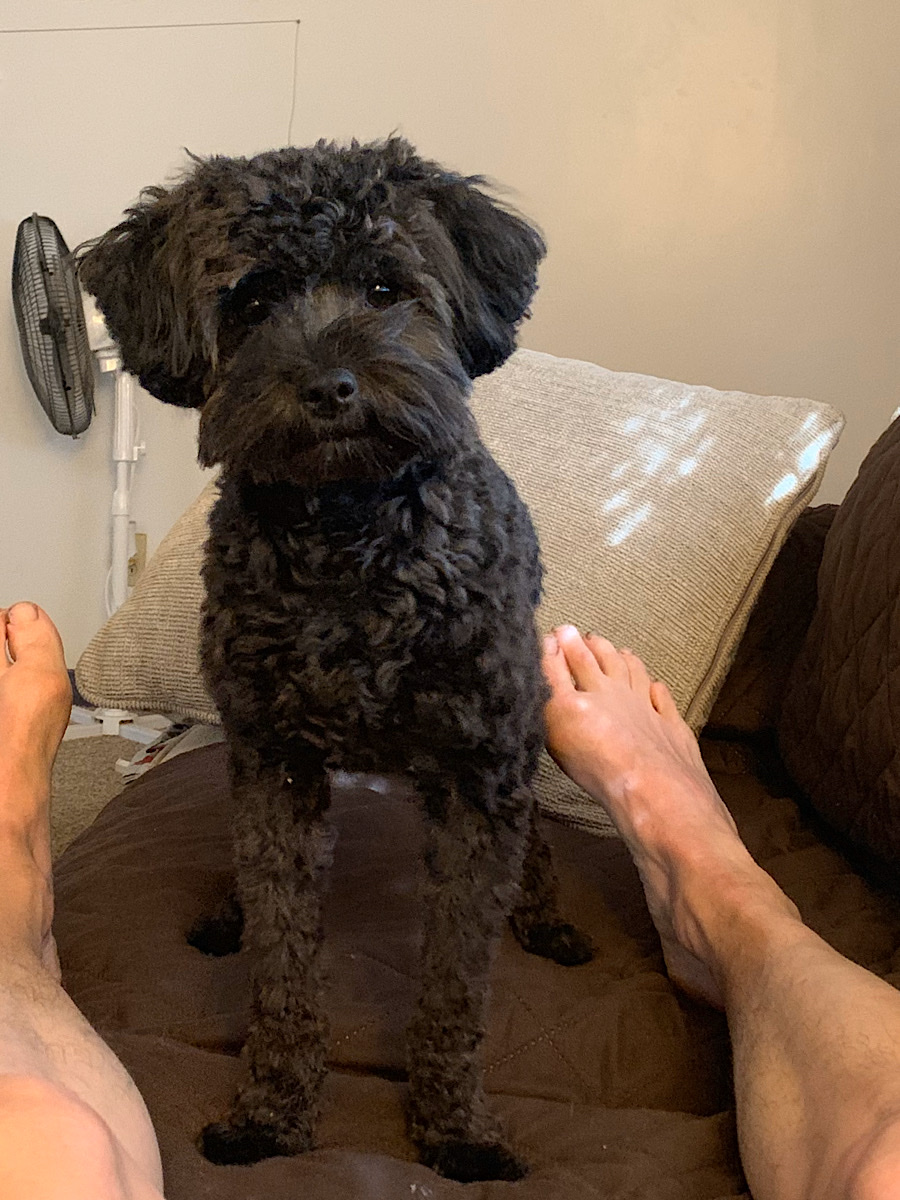