When you lose a couple of times, it makes you realize how difficult it is to win. – Steffi Graf 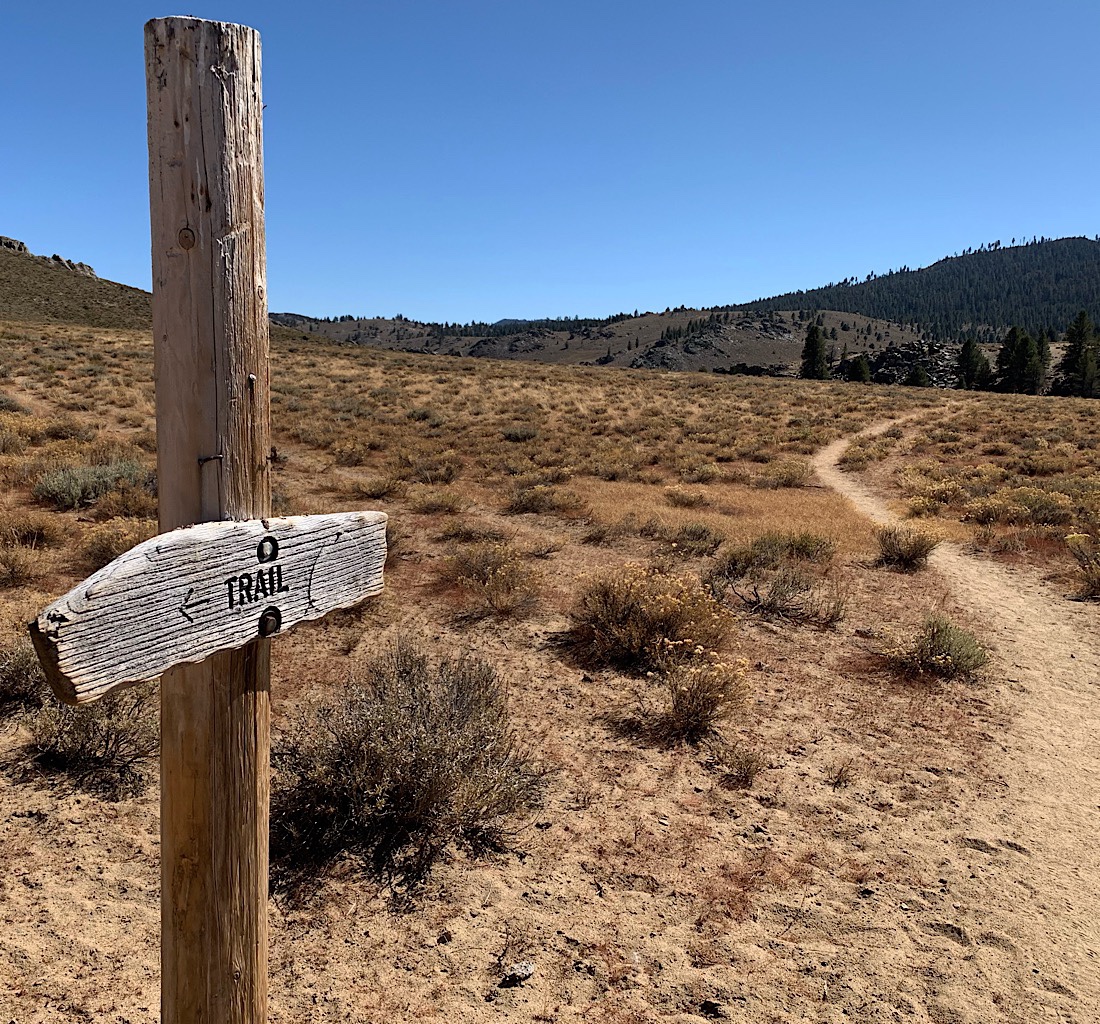 I’m sick of being cold. I’m cozy and warm in Big Greenie, but when it gets light, I have to get moving and every task is a frozen misery – changing my clothes, packing my mattress and sleeping bag, pooping, filtering icy water (the worst!) packing the alicoop, trying to pull apart frozen bars, sipping coffee before it freezes, washing up and putting things away, putting Olive Oyl on my back and setting my gps, walking with my hands under my armpits. But hey, it’s another shiny blue sky and the sun will be up any minute, and you are hiking outside, get over it!

It’s a bit of a late start from this lovely spot tucked into funky rocks. I was all alone except for some animal making a strange sound so I made a big, scary ruckus right back. Never heard from him again. Makes me laugh just now thinking of Rob telling me as we started the hard rocky bits up huge Forrester Pass that we shouldn’t simply coexist with bears, they ought to be afraid of us. So when he saw a bear he yelled at it, “Hey bear!” His thinking is bears really shouldn’t get too used to having us around. I don’t think he’s right about that, but the bears in the Sierra are pretty mellow and probably ignored him anyway. Just don’t make food available and we’ll all be just fine. 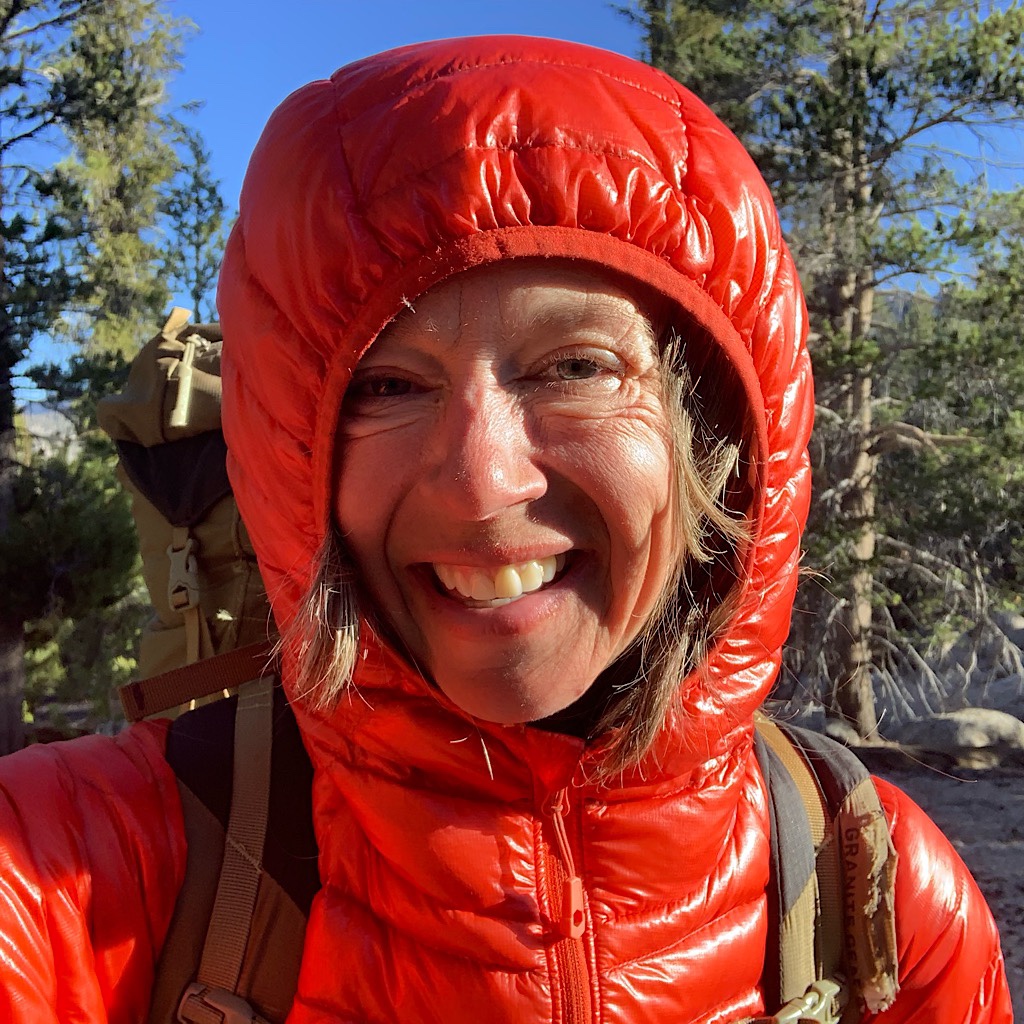 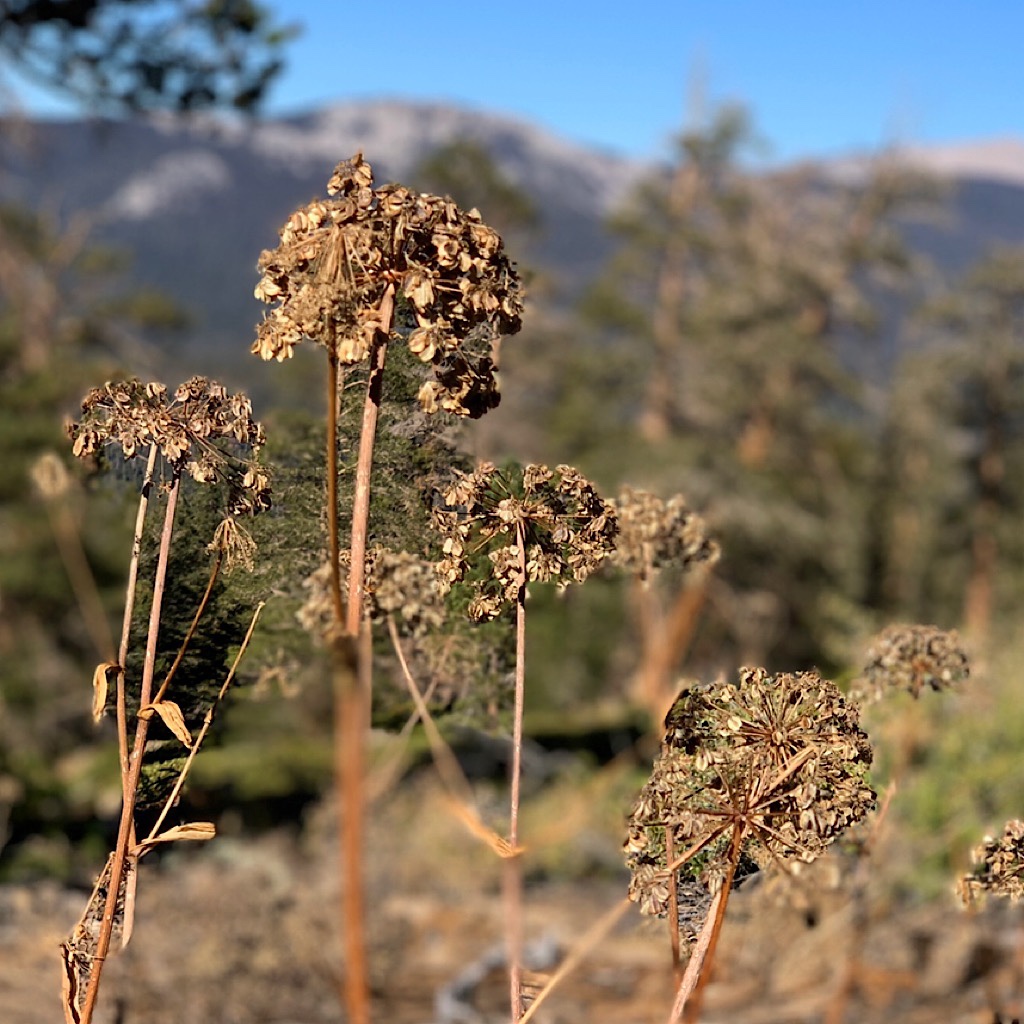 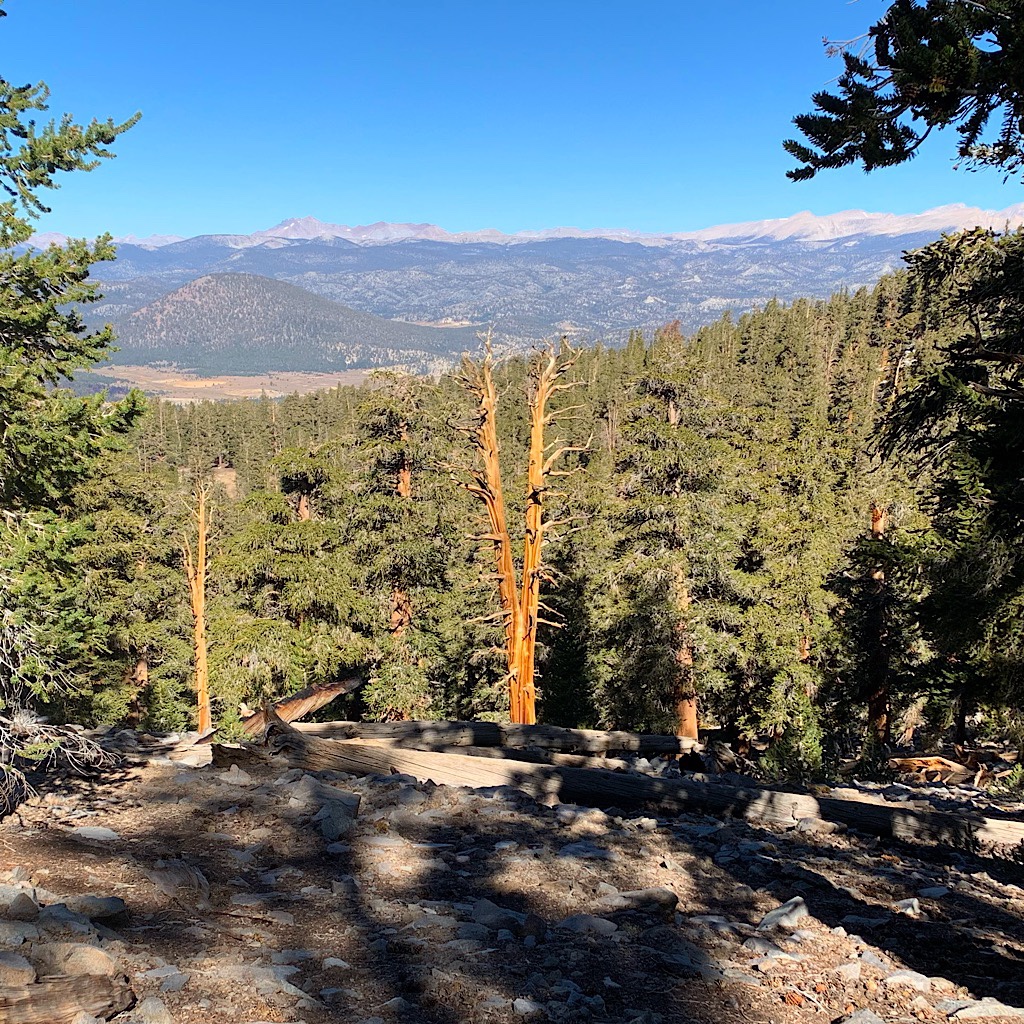 I’m in forest to start working my way towards Gomez Meadow. There’s a boardwalk through this marshy area. No sign of frost even though my water bottles froze in chunks. The cold makes me cry just a bit. I had another nightmare where I put up posters for a concert but included the wrong phone number. That would make anyone panic. The cold is making me move fast as the trail starts going up. Maybe it’s being out of touch so long on this hard section that’s got me a bit uncertain about what I’m doing, but I’m moving so well and managed all that the Sierra could throw at me. The Who’s “Who are you?” is running through my head, and right now, I’d answer I’m a thru-hiker.

It’s a long up, but gradual and without the exposure of the high sierra. Instead, it’s like waves with the crest, forest and the trough, meadows. I come out and see the shape to follow, though I’m constantly moving up, my puffy packed away now, sunglasses and hat on. The big mountains are distant, I see them gray with bits of snow in my rear view mirror. At my feet are hundreds of shards of white quartz.

As I say goodbye to the Sierra for what’s next, I think about what I’ve learned. I know now I can walk to heal myself. I’m stronger than I think I am. My friend from Alpine Meadows, Ursula, told me something that I think is a wonderful metaphor. She says she always waits to see where everyone else sets their tents before setting hers. I can do the same by setting myself apart when I need to or coming closer if I want. The high sierra was just the right mix of together and apart, but I always held onto myself. This hike is teaching me about boundaries, for sure, and also about letting people be where they are and not letting them drag me down. 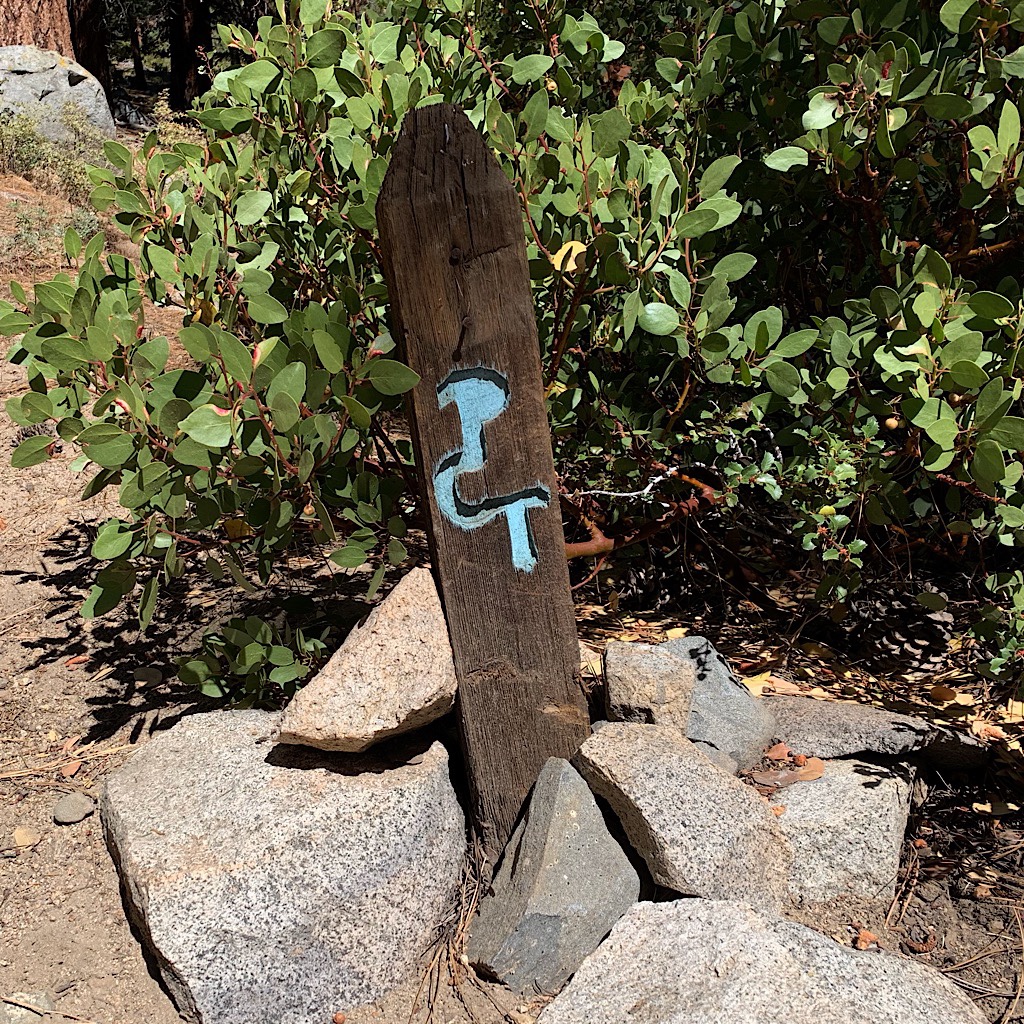 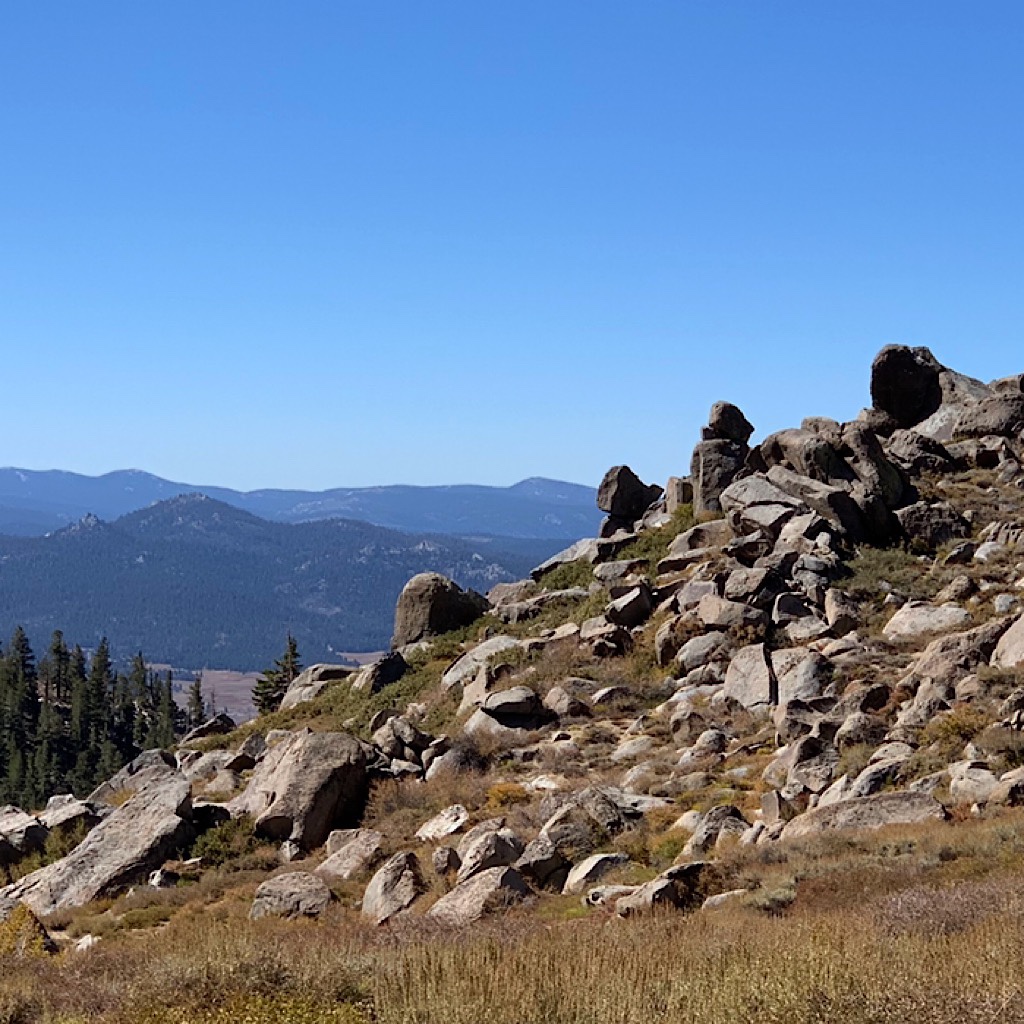 Ursula would love where the trail finally arrives after all that climbing. It opens onto a huge, sloping meadow, gently reaching down to a wide, flat area below. With rocks placed just so, one might think she was in Switzerland with cows out there instead of rocks. The flowers are dried to a crisp, still perfectly lovely. Even lupine holds its delicate shape if not its color. A bird with a yellow tail looks at me before fluttering away.

As I descend, new trees take over like ponderosa pine, their long needles making a shushing sound in the cool breeze. Sage and manzanita are back. I pass two hunters, one with a pierced eyebrow. They tell me they’re looking for deer, “Seen any?” they ask, hopefully. 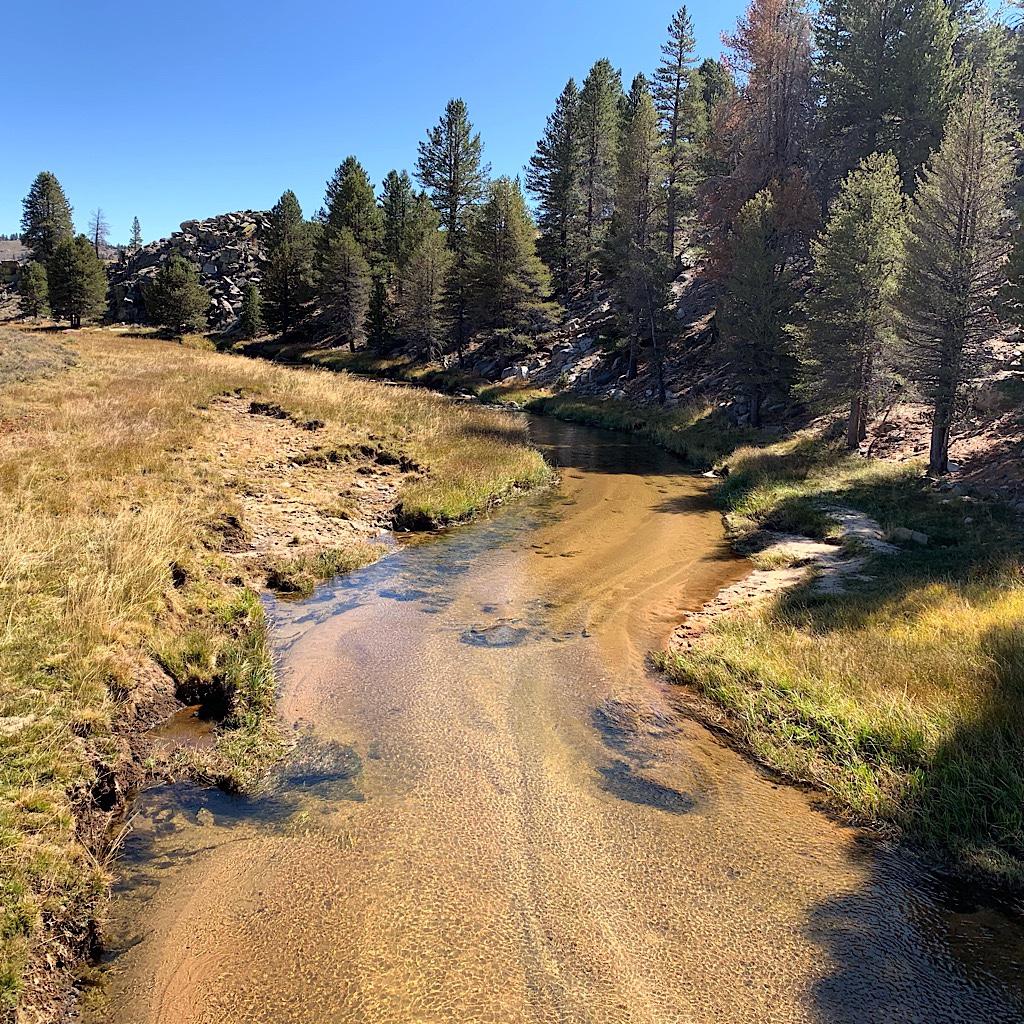 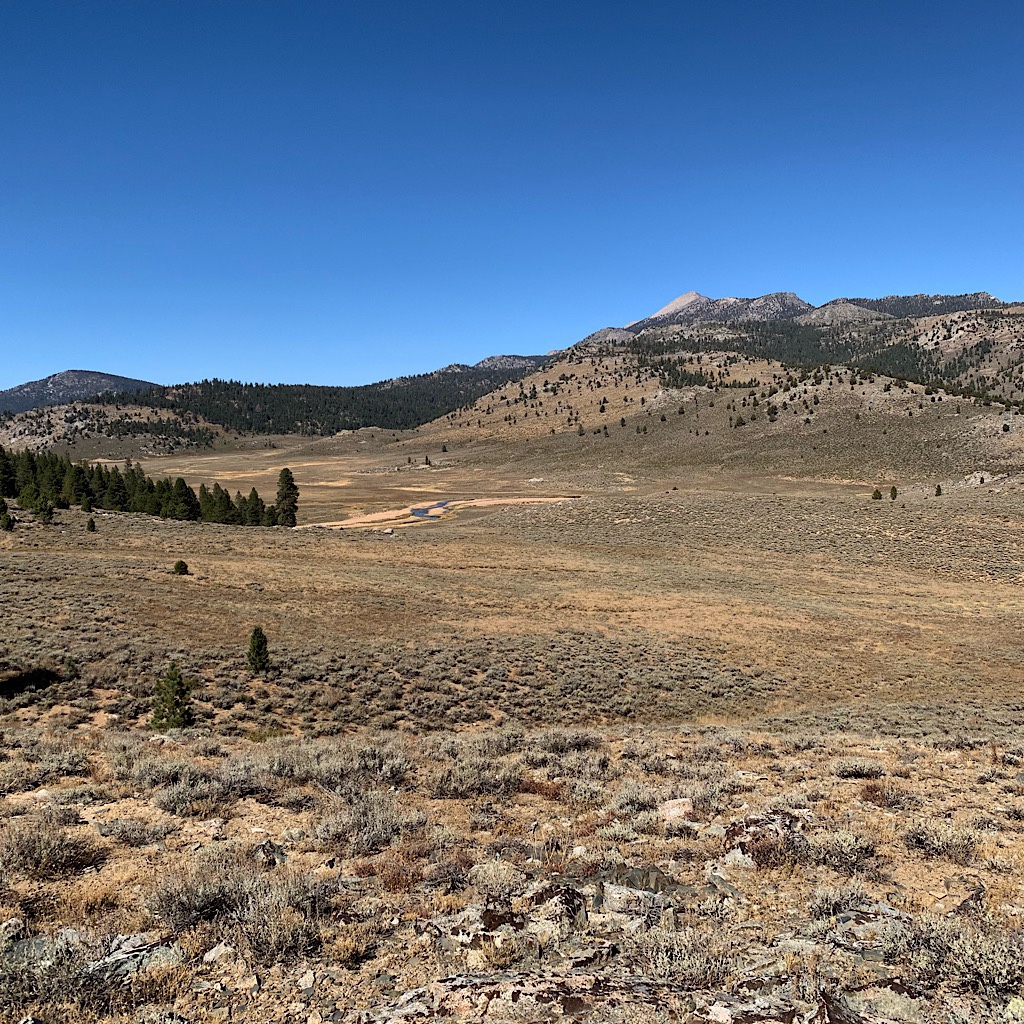 I stop at a stream for lunch, cleaning out nearly all of the bear canister, except for a giant ziploc of potato flakes from the hiker box. I carried that over 100 miles and will finally eat some tonight. I walk out of the forest onto Monache Meadow and things really begin to look like the wild west. Wind quivers low bunchy plants that grab at my pants. I see three hikers way in the distance, giving me a sense of the immensity of this meadow. They are on another path as mine turns towards the Kern River, a wild and scenic river with a sandy bottom. I cross on a bridge, then head steeply up. The flora changes as I move up to include mesquite and scrubby bushes. I spy my first cactus.

I always think I’ve gone farther than I’ve gone, the trail here nowhere near heading down yet. I sidle a hillside with another meadow below, this one with some buildings. A farm? Hard to tell from here. I pass a backpack, then come upon a backpacker who steps aside for me. When I ask how she is, she reveals a seriously sunburned face, answering, “Fine, fine, fine.” and turns away. God only knows what’s going on there. I am walking much faster, so leave her behind as I head up once more just a bit before cresting and heading steeply down into a narrow canyon. 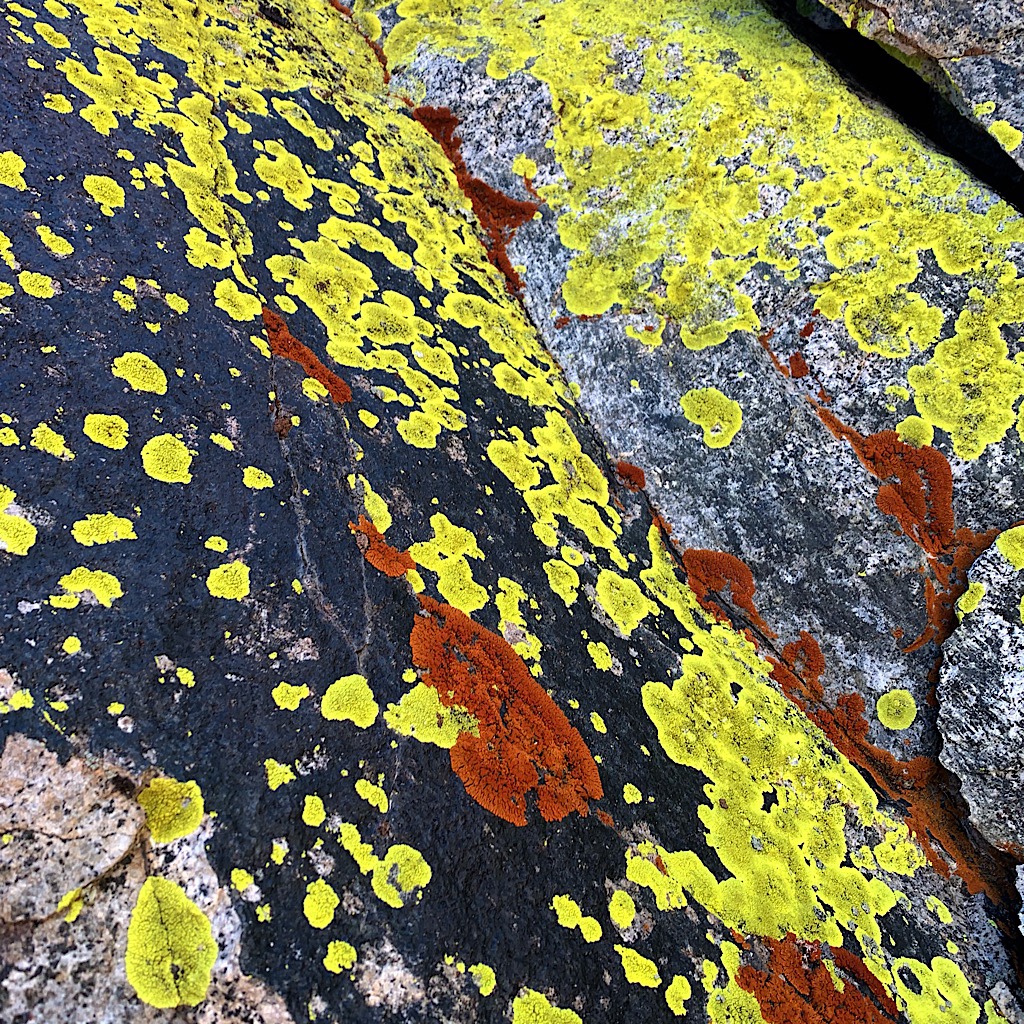 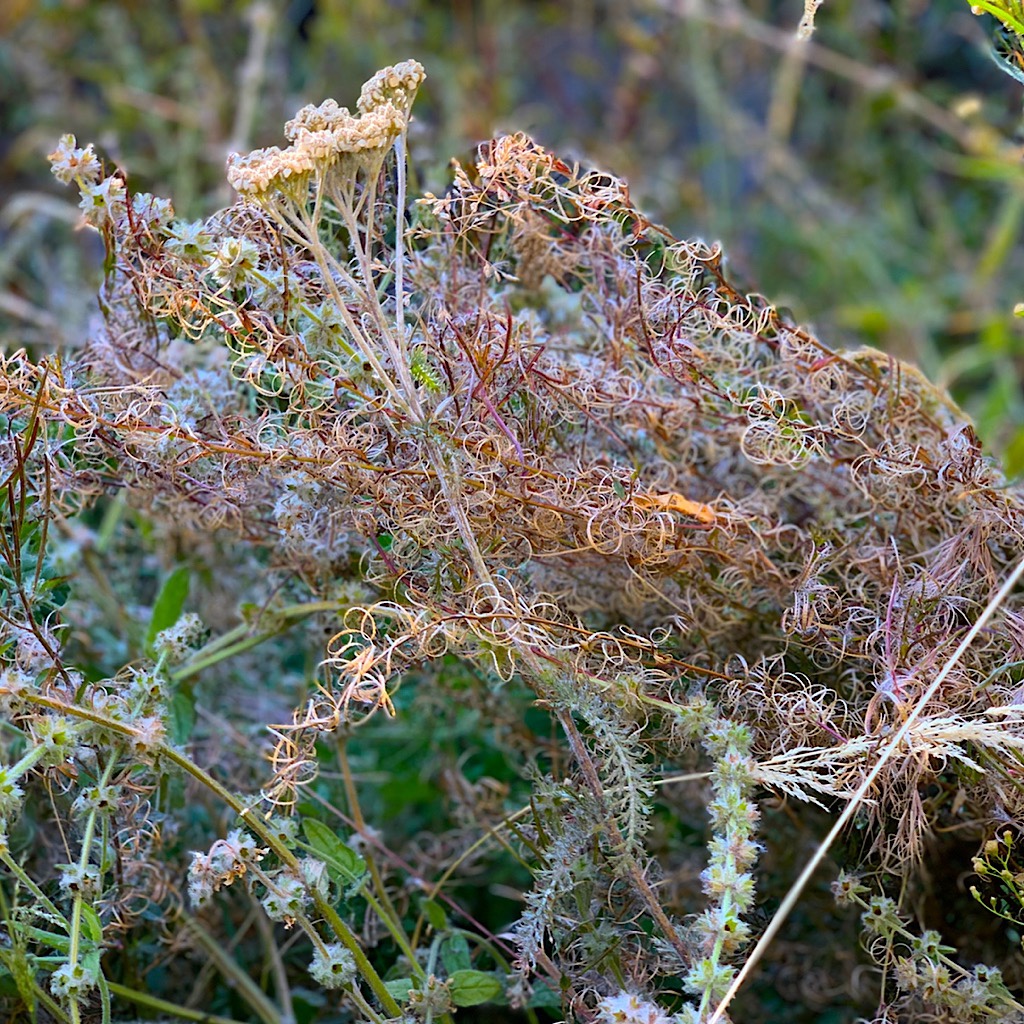 It’s recently burned here and the trail is churned up from fallen trees. Tiny lizards scurry as I pass. A black beetle with long legs takes his sweet time. It feels like pre-desert here, the smooth gray carcass of a many-armed tree framing a dry but fascinating landscape. Sage grows in clumps, in fact everything is in clumps including bright yellow flowers. The trail moves like someone drawing ocean waves, coming way in to avoid what must have been raging torrents of water in spring. There’s no water now so the path feels haphazard and out of the way. I pass areas of only low bushes on sandy soil, then huge trees growing in more nutrient-rich runoff.

The trail circles pyramid-shaped mountains then works its way into another valley, thick with trees. Crickets sing long high pitched trills as I look out for the Kern River which I’ll meet, drink from and sleep next to. As I mentioned, I’m not a good judge of distance and the gps on my map app is not working at the moment. I get a bit nervous out of water as the sun is setting and seeing very few flat spots.

But eventually I hear the water and there it is, flowing deep snd clear. At the bridge it suddenly feels too early to stop, so I saunter ahead, collecting water when I can get close and setting up camp in weird rock formations above the river. The moon is lighting things up, crickets and water sing their lullaby. I got my wish and it’s not cold. The only downside? The mosquitos are back! 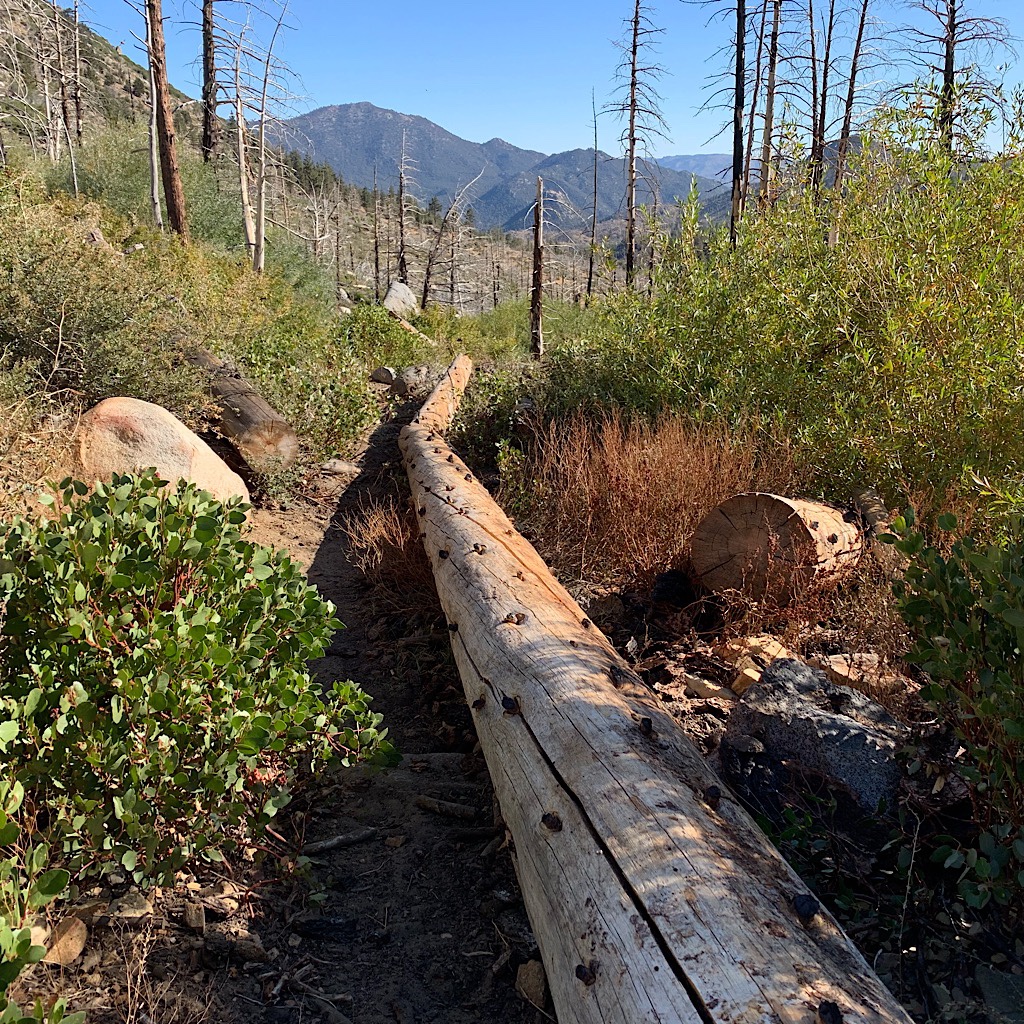 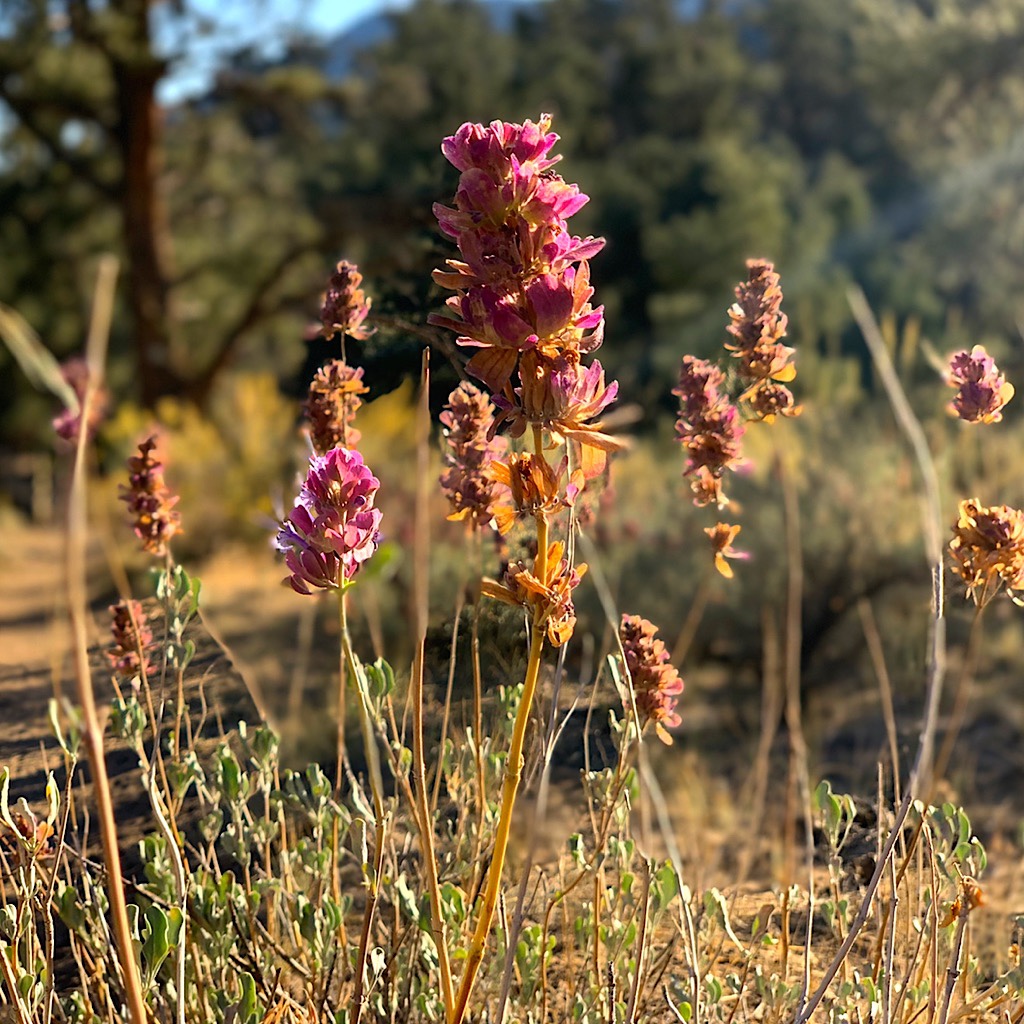