My only advice is to stay aware, listen carefully, and yell for help if you need it. – Judy Blume 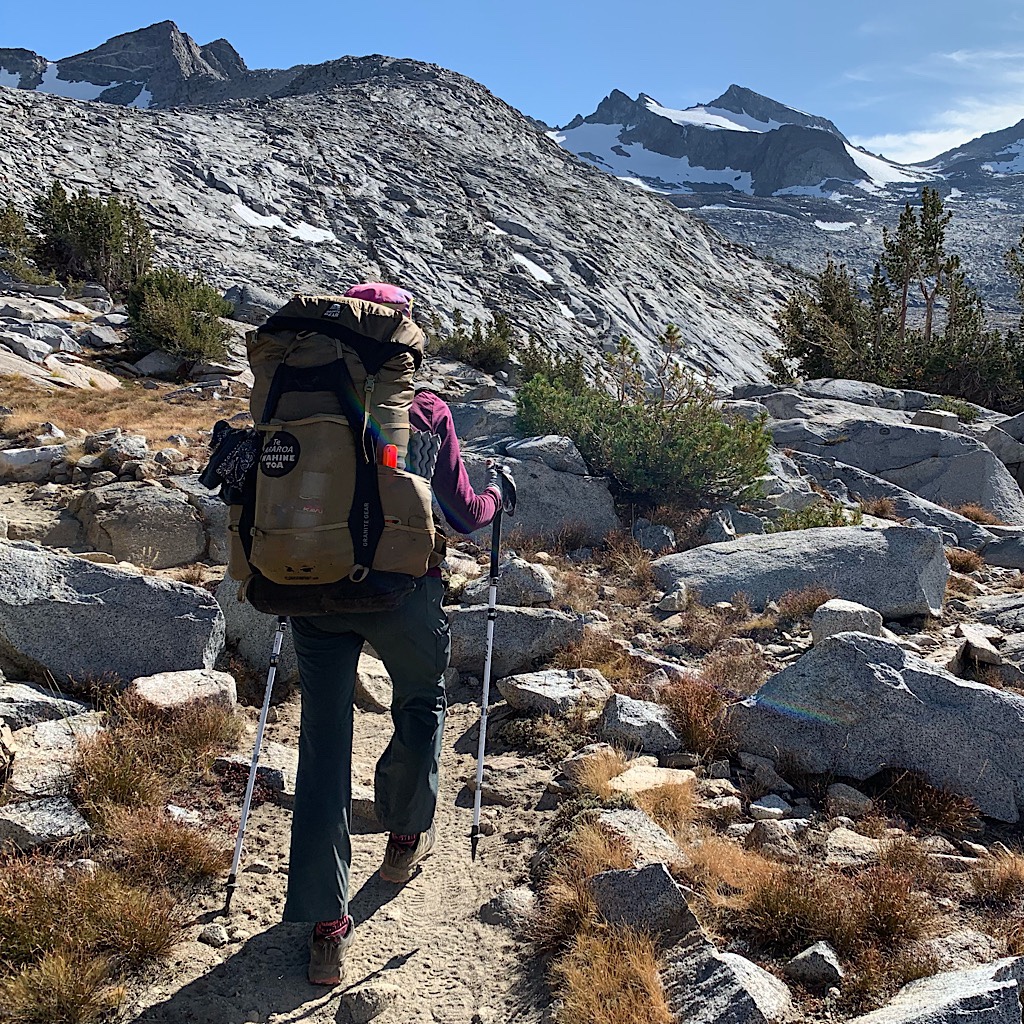 Shocking as it might sound, I’m too warm in the night at this exposed perch. There’s no wind. There’s no dew or frost. It’s only silence as the stars fade, a half moon shining like a lantern straight down. I pop right up, ready for the day ahead. Donuts passes by as I pack in her typically unhurried and joyful manner, saying good morning and that she’s jealous of this awesome spot I snagged.

I do love the solitude, the falls below my only very distant companion. I follow her shortly, down deep into the forest where I immediately feel a damp chill to the bones and need to put on another jacket. Good choice camping up high. It’s not far to Tuolumne Falls, crashing down off granite into a large pool. Impressive, sure, but this part is hardly the main attraction as I climb up steeply on rock, stairs and ramps assisting me to an even higher – and grander – falls, the river above leading to this moment of water doing a kind of warm up act as it races down slabs in thin shears and tumbling on boulders, the sunlight reflecting before it plunges five stories to a waiting pool. 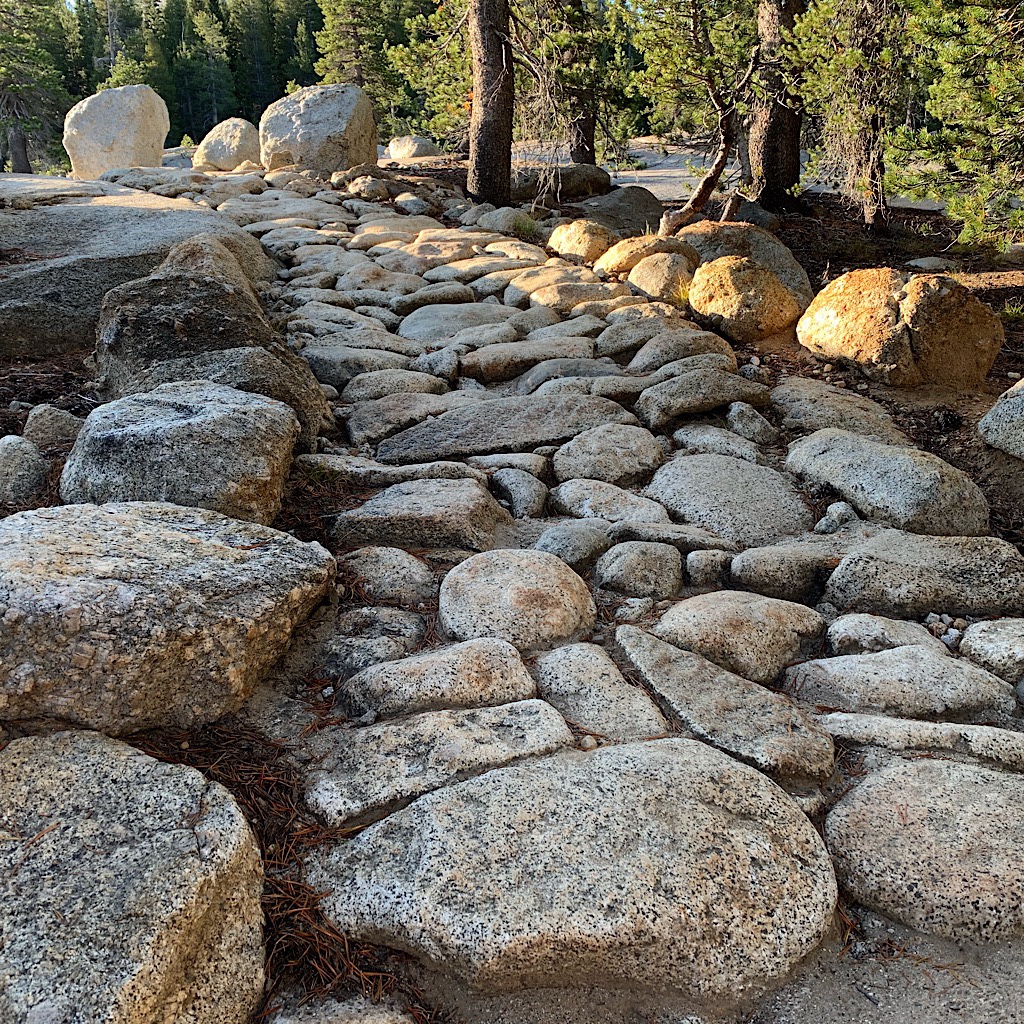 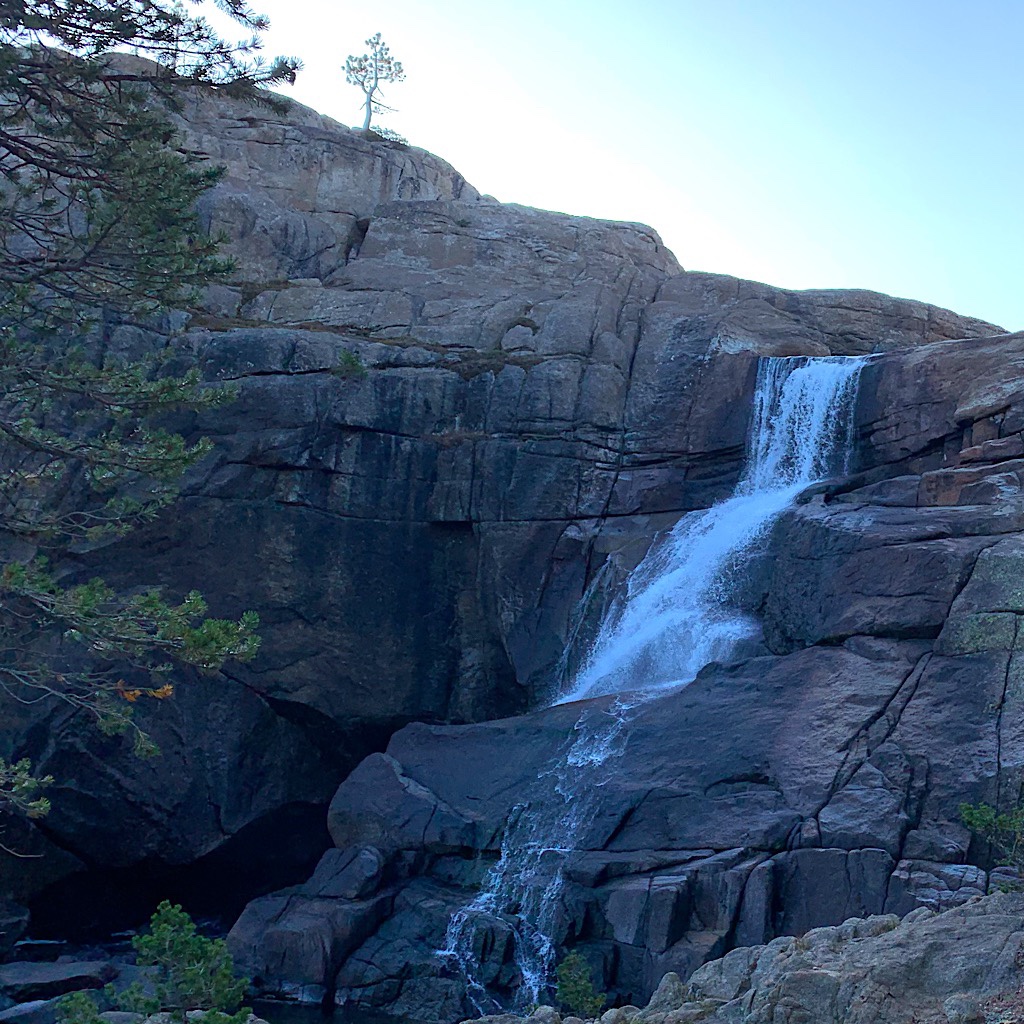 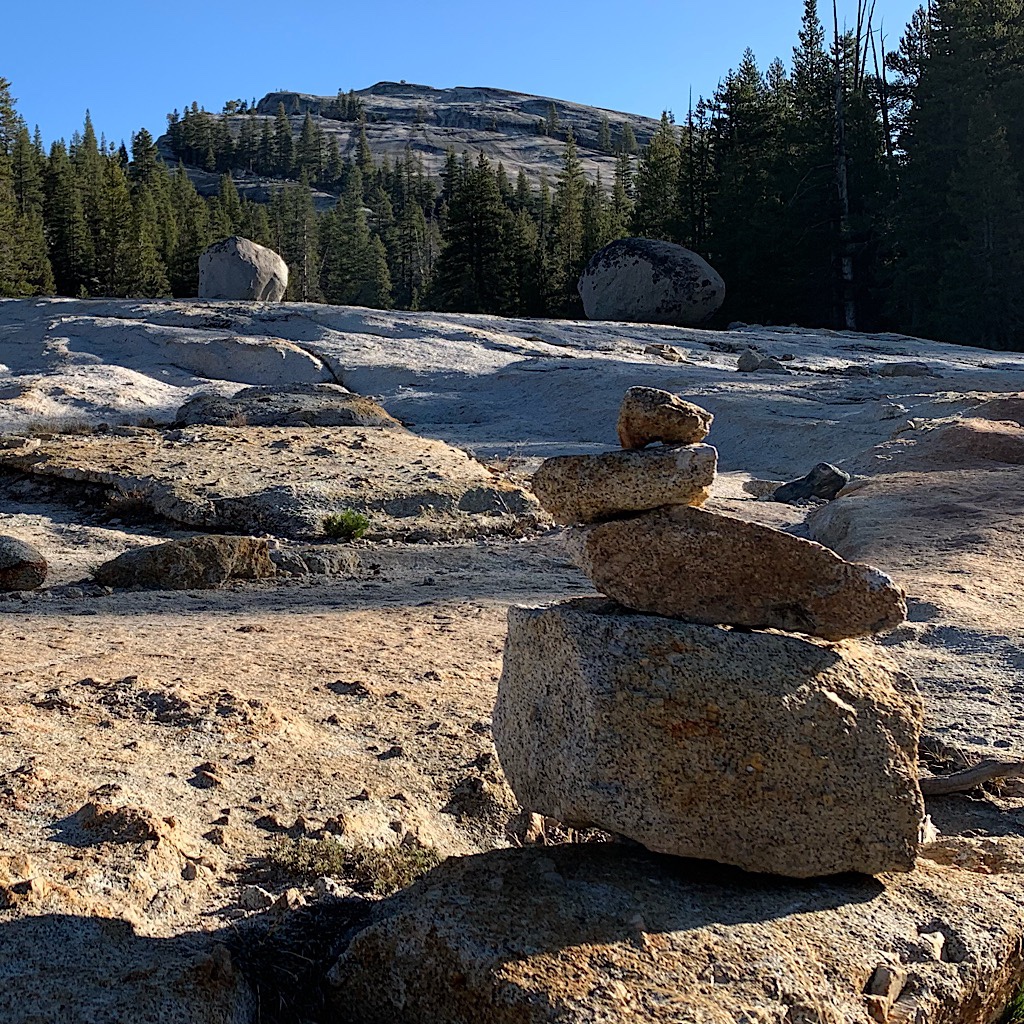 I, too, walk on slabs seeming to melt down the mountain. It feels so good under my feet, the rock exfoliated to pink underneath, highly polished sections like spilled coffee. I pass a backpacker, then another waiting for him, then four more who ask if I saw slow backpackers. I tell them I tried to prod him along with my sticks, much to their amusement. At this point in my thru-hike, I can move very fast indeed. It’s still early, so as I get closer to Tuolumne Meadows, day hikers begin to arrive in droves. It’s a splendid morning and I make a mental note to spend more time here soon just hanging out on the slabs in the sun, my toes in the rushing, ice cold water.

I pass Soda Springs where a man raised goats and collected bugs for the Smithsonian back in the nineteenth century. In the winter, he wisely took up residence at a lower elevation. Signs tell me about this magnificent high meadow that experiences eight months of winter – my hope is that winter 2019 begins sometime in mid-October when I’m well past the Sierra. The meadow was created when glaciers left low basins that eventually filled with sand. Snow melt keeps most trees from growing but allows short hair sedge to flourish, all of it a beautiful yellowish brown now. Lots of animals do not hibernate even though the meadow is under many feet of snow, This is because there’s a gap of air between the snow and the ground where they flourish all season. This does not include the picket pin ground squirrel peeping away somewhere in the meadow just now, the parents going to bed for eight months before the kids join in.

All of this fascinates me as the trail joins a dirt road then a paved one filled with tourists and backpackers. I walk into the little village for a giant breakfast and run into many of my friends, including Bat Girl! I’m so glad to see her on schedule to finish in a week. I also run into Just Right from day one and she’s finished the Sierra just as I learn a cold front is coming in five days with temperatures in the teens and snow expected. I come up with some possible escape plans, eat quickly, buy a few more consumable items and simply start walking again to see how far I might go. 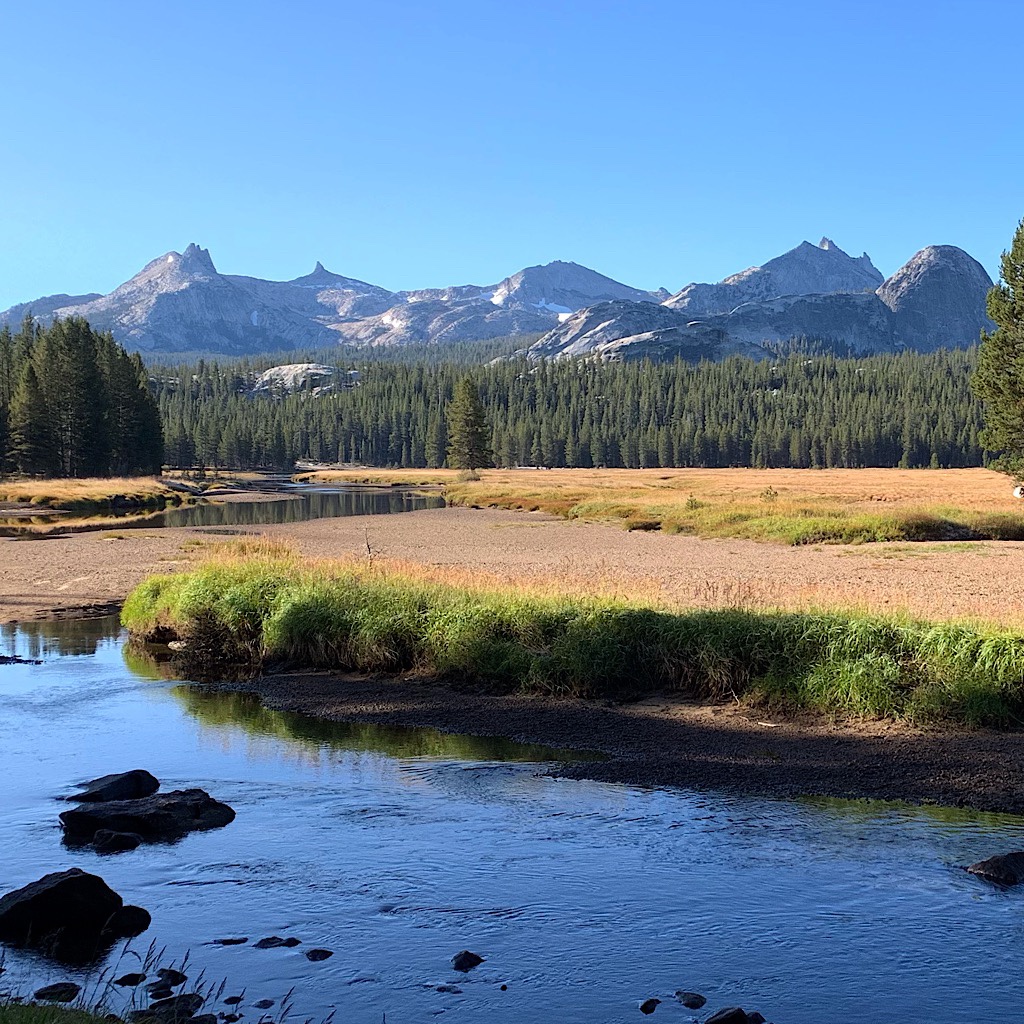 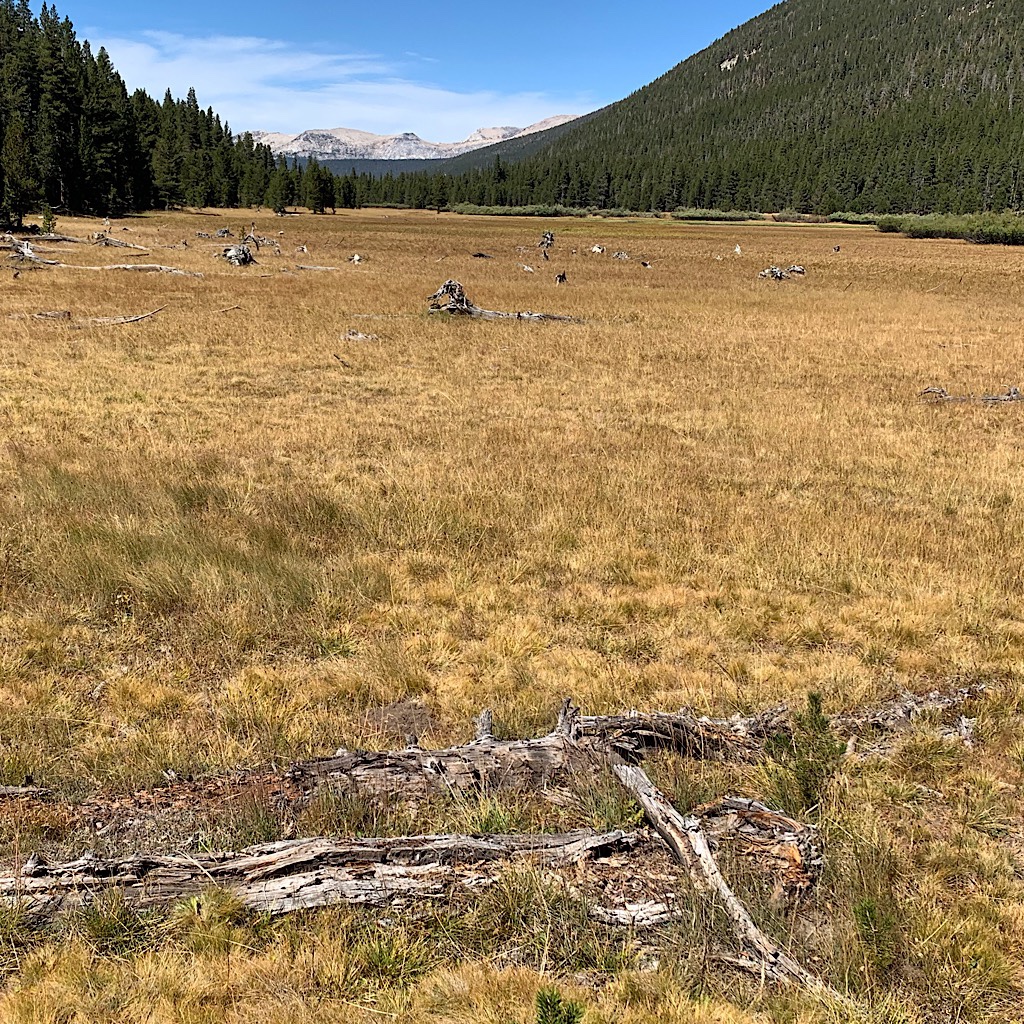 I walked this portion of the trail in 2012. It’s called the John Muir Trail and is some of the loveliest scenery in the world. I relive a few of the experiences by first taking a shortcut through the campground to avoid road walking. Just like seven years ago, it’s a bit disorienting at first, but eventually I’m on track with mostly flat walking in forest and then meadow. I walked with Ted and Dave back then, both of them suffering from the heat. It’s hot today too, the sky crystal blue and the direct sun at 9,000 feet enervating. But I feel awesome after my meal and also because I’m back here in this glorious place.

There are so many hikers, but they are different from most of the PCT hikers I’ve met – happy and less in a hurry. It’s refreshing and makes me happy as people say ‘hello!’ and ‘how are you?’ then pop out of the way for you to pass giving off a vibe of camaraderie. There might be a few too many hikers but their joy makes me feel more joyful.

I am cruising along fast with a full belly and flat walking. A man does pass me and tells me I move fast to which I say that he’s even faster if passing me! We walk a few moments together, before he – Nathan – flies off. I push on, passing huge granite mounds and endless meadow, a river so clear and fresh meandering through. 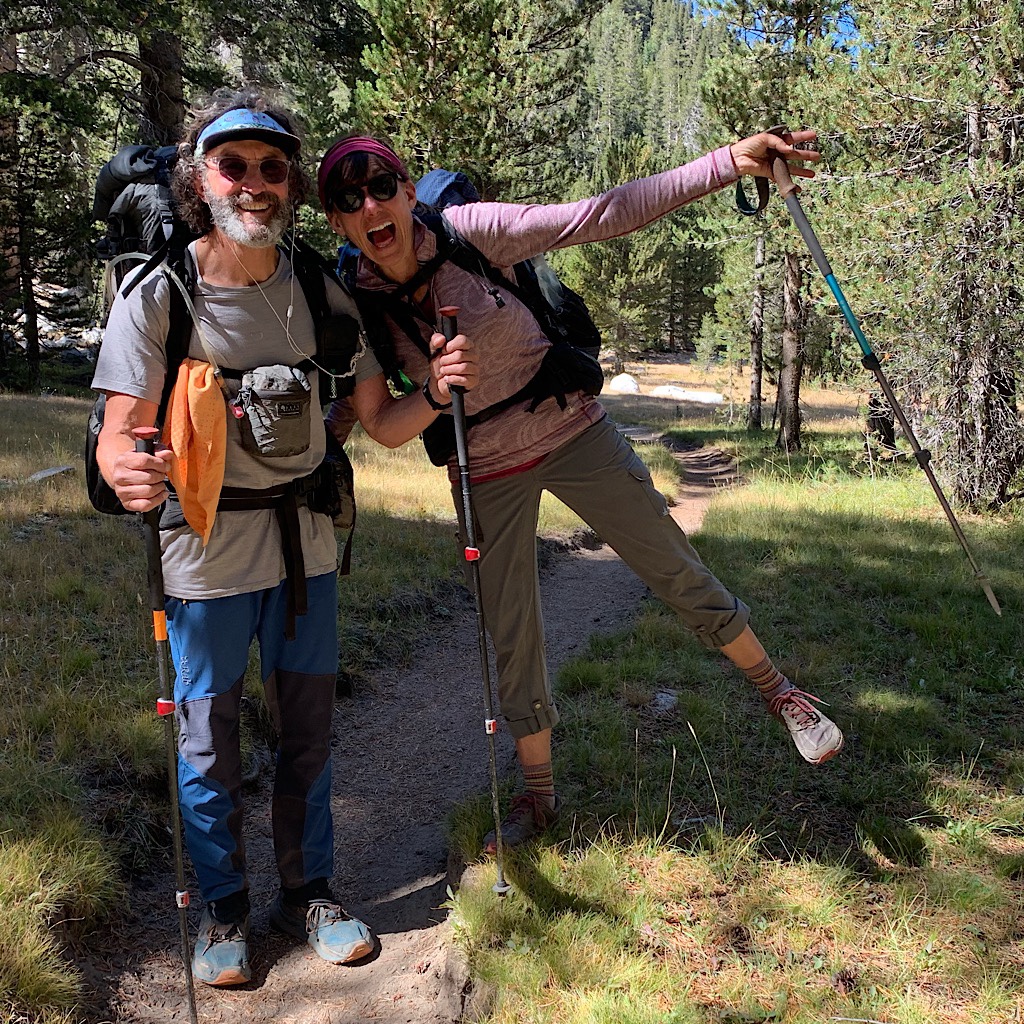 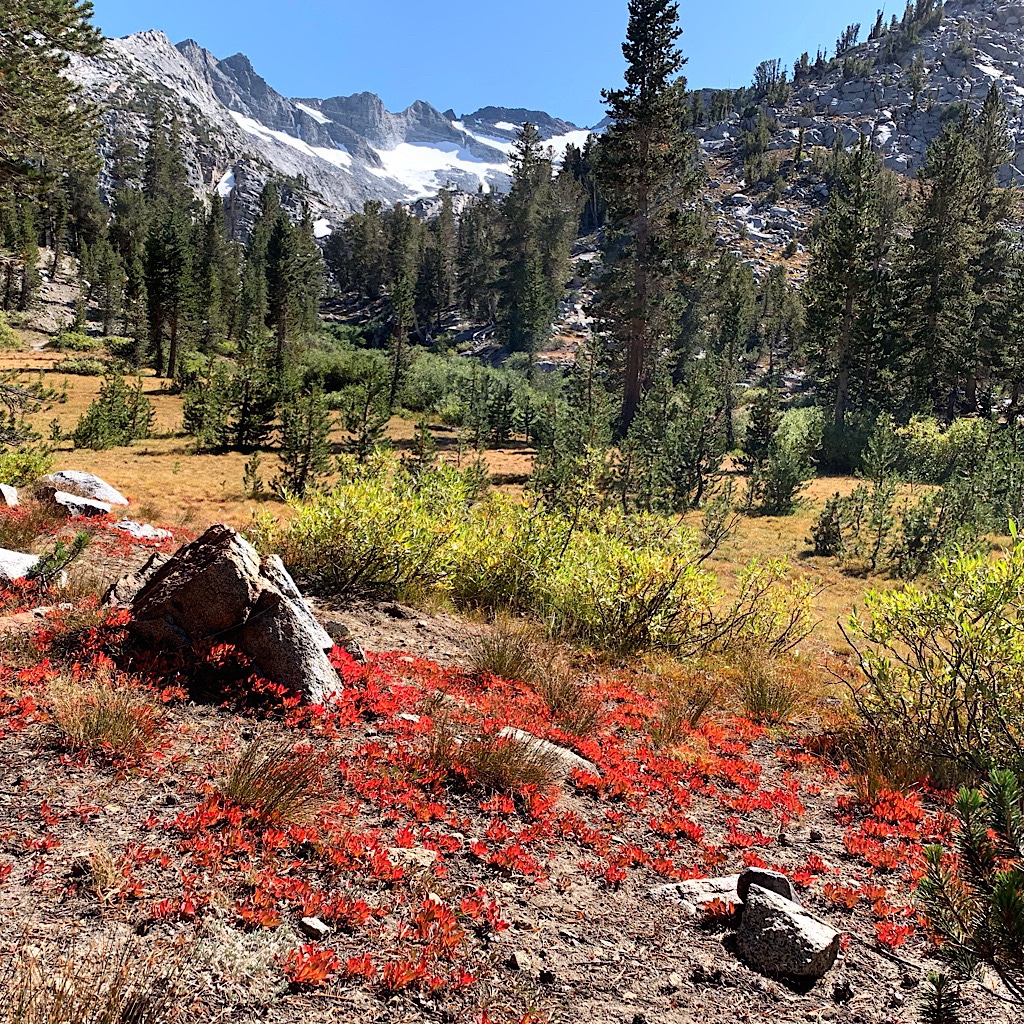 I pass Nathan filtering water before arriving at the place I camped seven years ago that looks straight into the mountainous bowl the trail crawls up and over. I stop for a minute to remember that lovely night when bats fluttered over me and my friends as we ate dinner. Just then Nathan catches up and says he wants to go over the pass with me. Saddle up, it’s 2,000 feet of climbing which begins almost immediately going straight up in the forest. I have loads of practice from the past two days, so know how to regulate the air and adjust the throttle. Nathan is fast, but still let’s me pass.

We arrive at a flat section near water where he’d originally intended to camp, but pass on by and head up some more, arriving at a long narrow lake and a dream view of jagged snow encased mountains. It’s up granite stairs in the open now, switching back a few times to a final bowl below the crags and another alpine lake crossed on rocks.

Up and up we fly on wonderful-to-the-touch granite in enormous slabs, the trail indicated by rock cairns or simply a boulder row. Nathan leads now, and we switch again, but reach 11,200 feet together elated by the thrilling view and our strong legs and lungs. It’s a lonely lake in this saddle, the wind picking up as clouds move in, so down we go into a jumble of rock, twisted jeffrey pines, perfect little lakes and tundra plants. 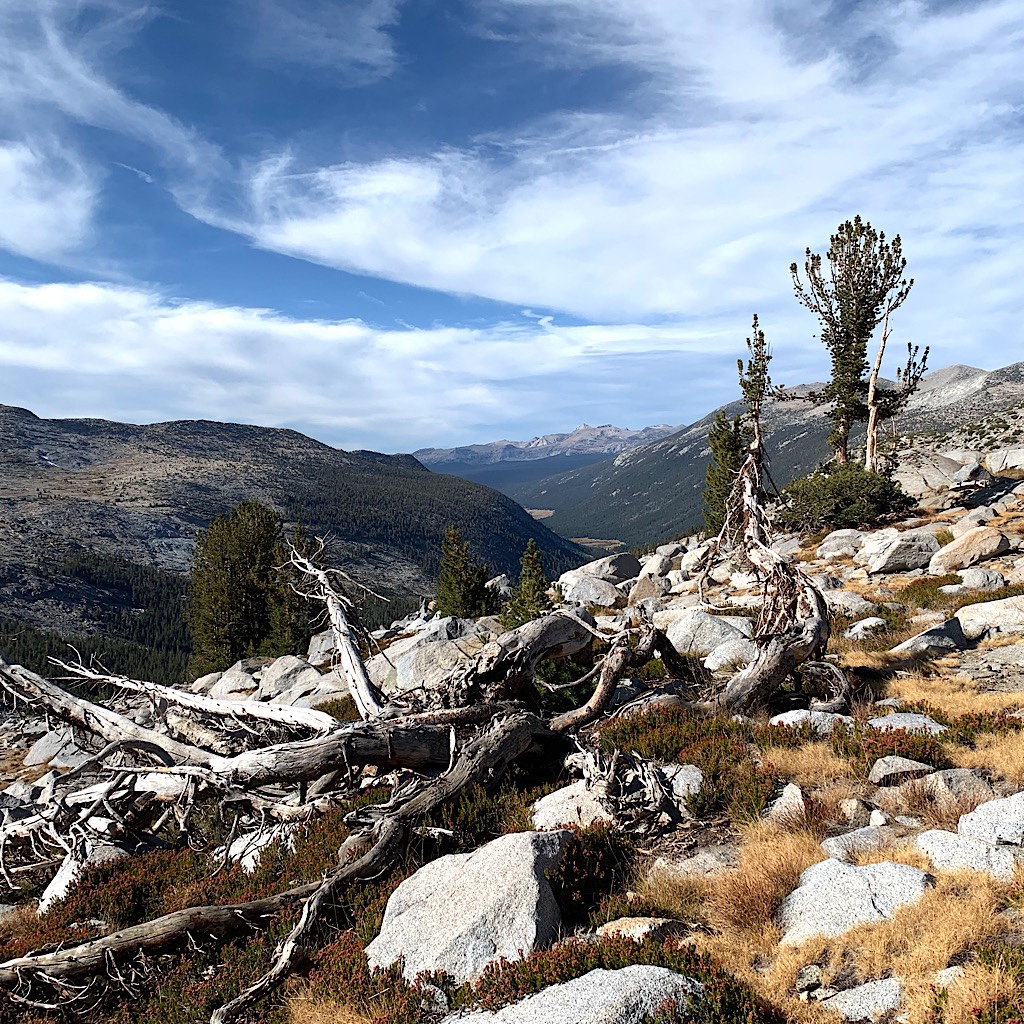 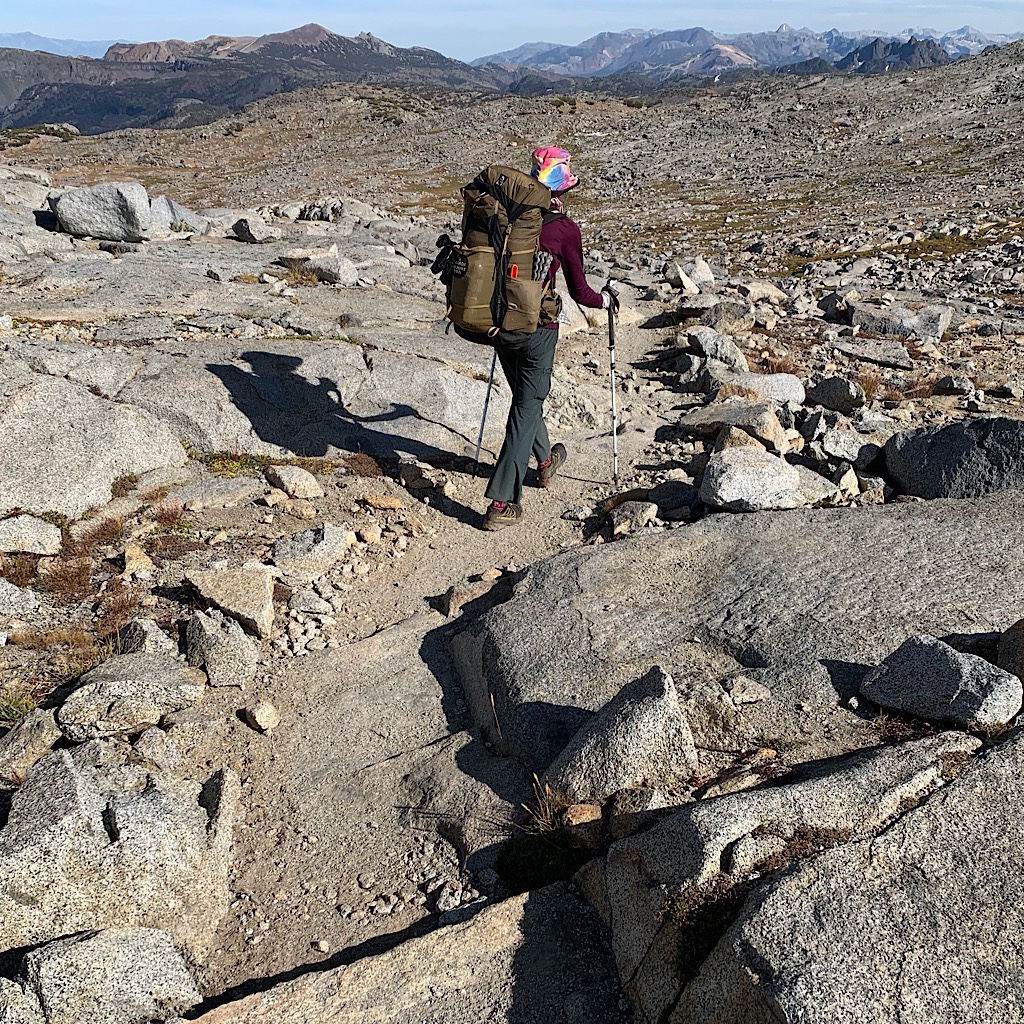 We talk about life and how a good kick in the pants can be the best thing that ever happened to a person, steering them in a new direction. We talk of choosing a lifestyle and career that allows for incredible adventures whether mine on the PCT or his on the JMT. And we talk about how good it felt to fly over that pass. We find a place to pitch our tents near a little creek – which soon gets crowded with many more hikers. But the creek plays a beautiful tune and the wind really picks up, whooshing through the pines as the spectacularly shaped towers we walked past turn pink and finally all is dark, hikers resting up for tomorrow’s adventure. 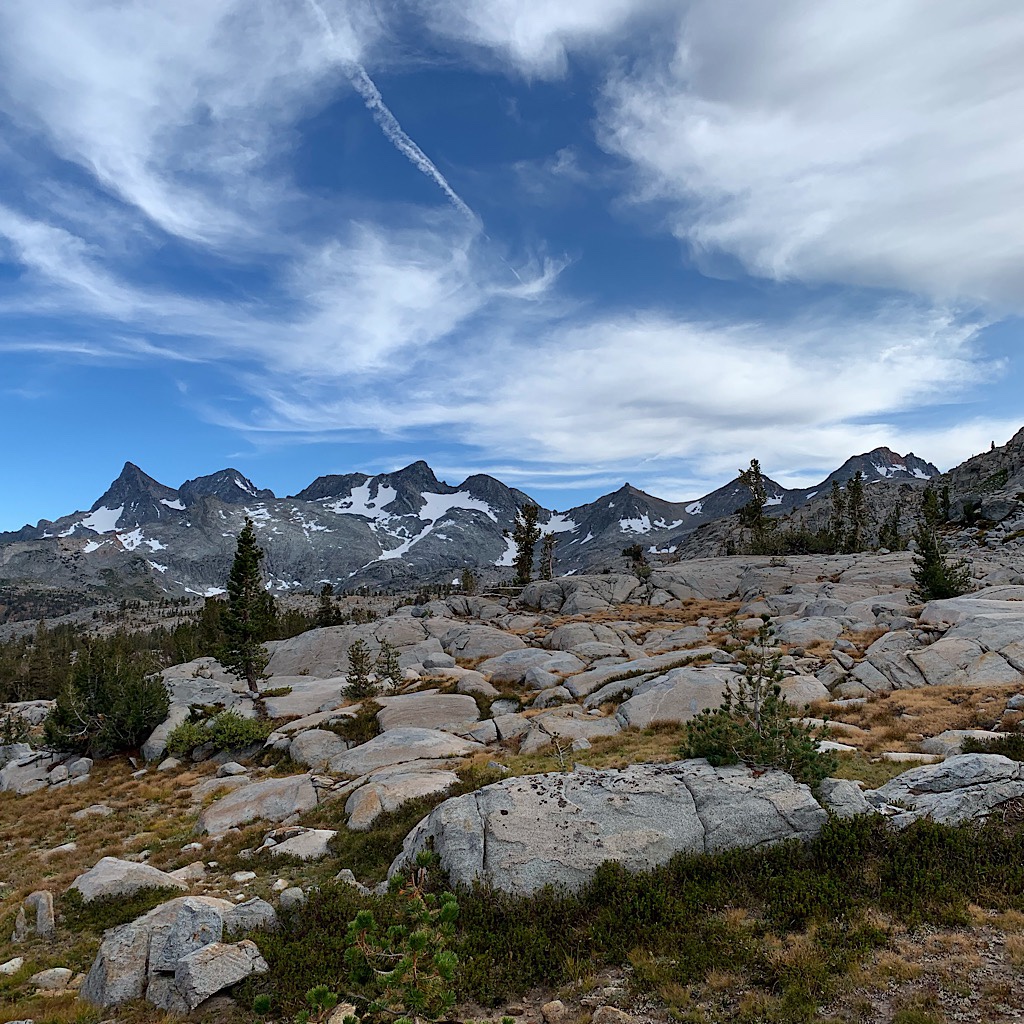