I learned a long time ago that there is something worse than missing the goal, and that’s not pulling the trigger. – Mia Hamm 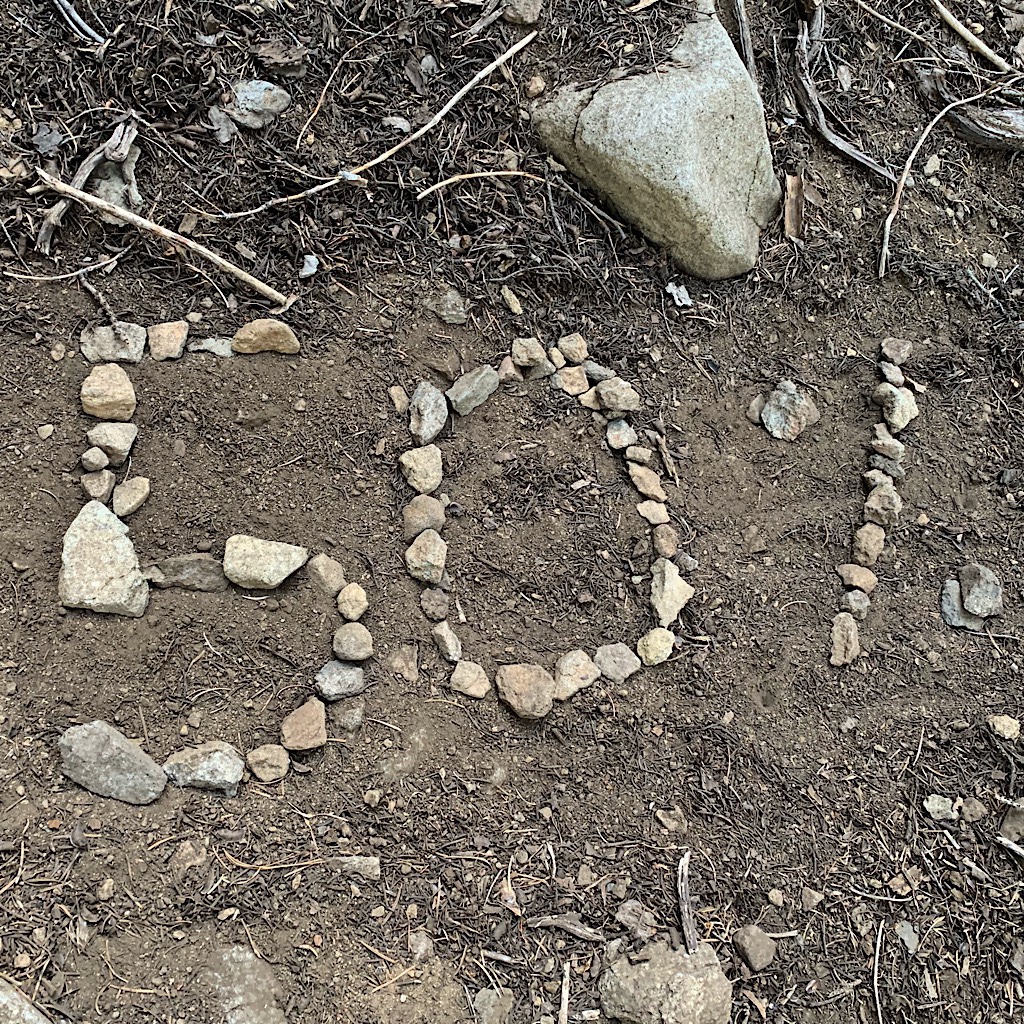 It’s a late start this morning with the sky already getting pink. In this notch made by the river, the cold air settles – even on a wee ridge above – and I was just on the edge of chilled overnight. Richard is sending my tights and sleeping bag liner, and I hope it’s enough as fall grabs hold. Klaus tells me he was so cozy, he didn’t want to move.

I get the morning routine going as he contemplates whether to stop in Chester for food, which requires a hitch. I tell him I don’t have enough for the 53 miles to the next little town which doesn’t require a hitch, though I would love to keep my momentum. He says, “I don’t want to lose you.” and I almost bust into tears. It’s not as intense as it sounds since English is not his first language, but we both enjoy hiking together and I feel the same. 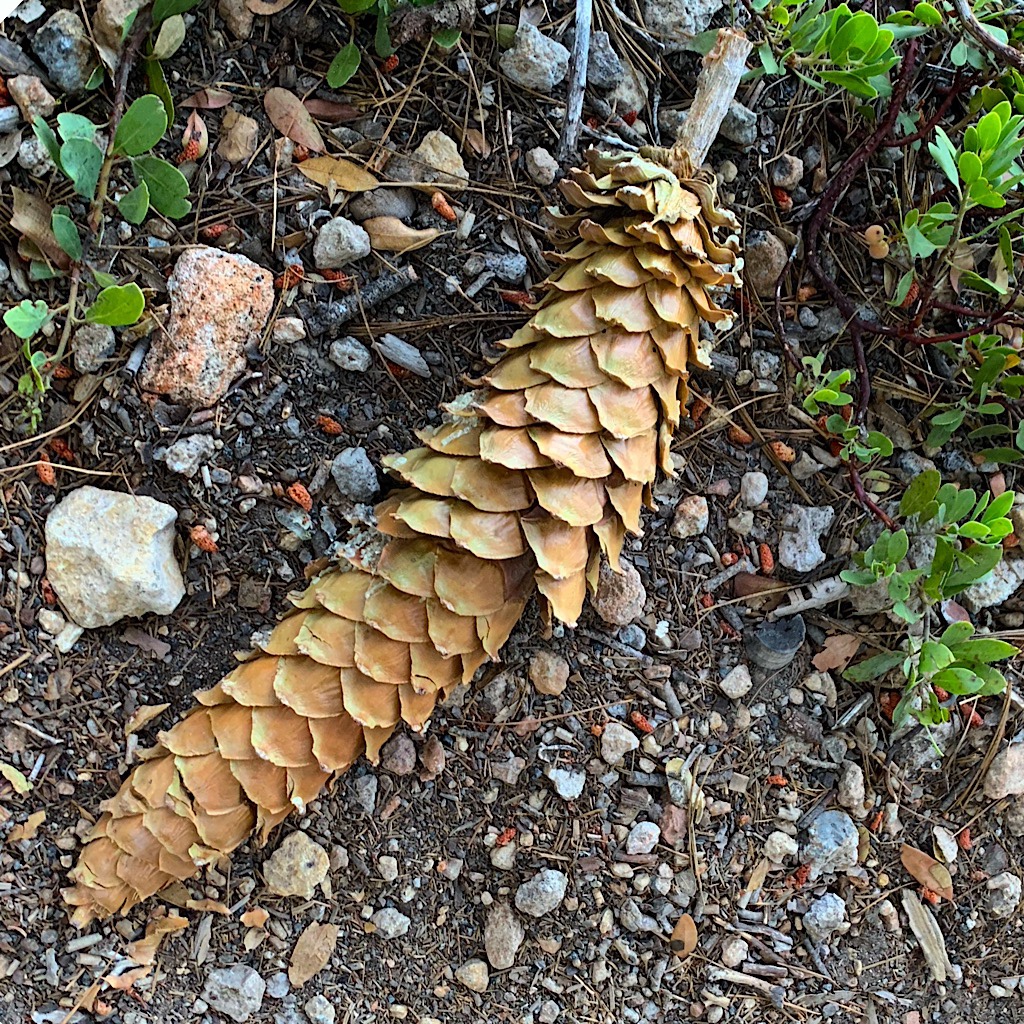 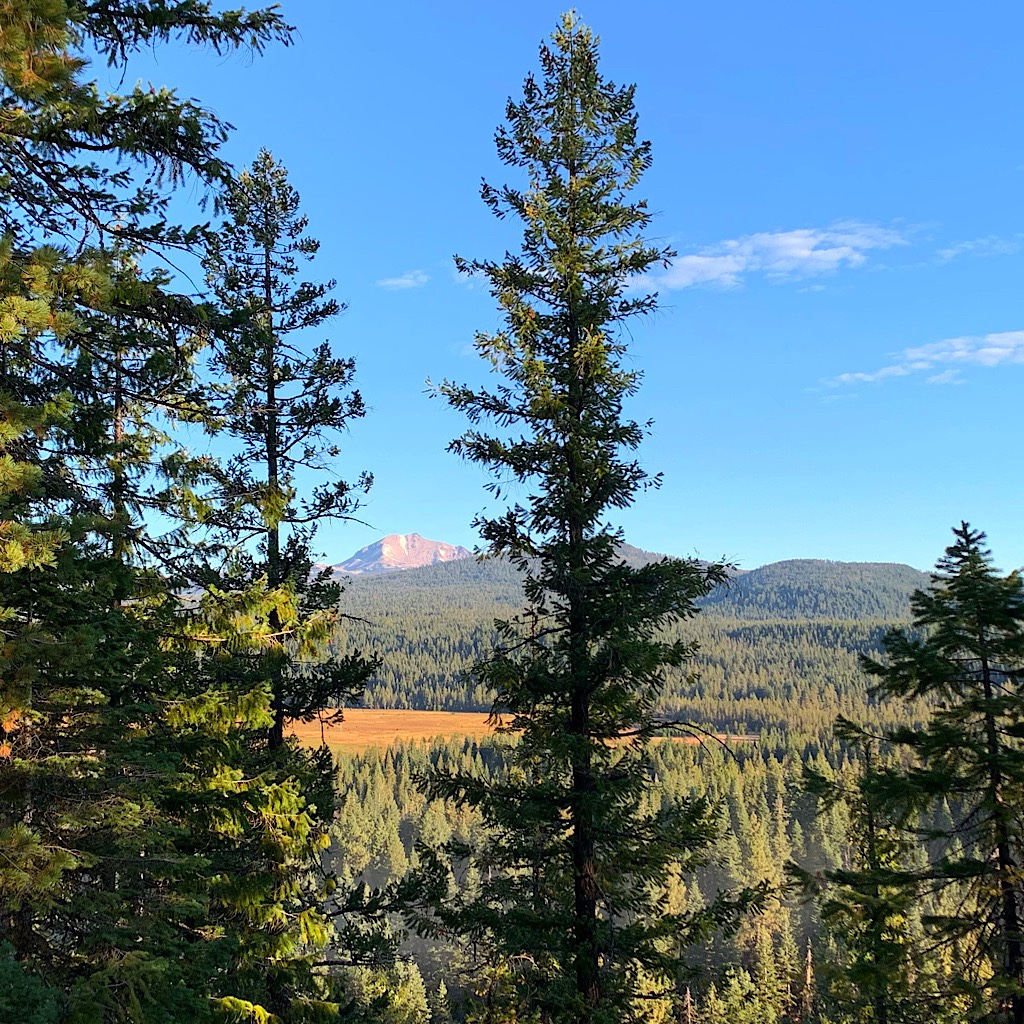 So off we go, up into the forest. It’s the land of gigantic pinecones – as well as itty-bitty ones. The dominant trees are Ponderosa and Sugar Pine, White Fir and Incense Cedar though I am still trying to figure out which produces these absolutely glorious cones. At home, I have a few I’ve collected. Here, there are thousands upon thousands lining the trail and I never tire of their whimsical beauty. I actually never tire of my trees either, the magnificent shapes on their bark and their nobleness from tiny sprout to giant to death.

At the water source, I camel up with added electrolytes. Signs show the PCT, pointing towards Canada or Mexico, take your pick. The halfway point is getting closer. Klaus and I discuss our options again and agree to check out the town. It’s funny how these things feel monumental since it takes time to go into town and it’s easy to get sucked into its energy – which feels jarring after not seeing a soul since mid-day yesterday.

We reach the road with just a short eight miles to town, but no one stops. One driver in an SUV, but no stopping. Some even wave as they go by. <sigh> Perhaps they’re afraid or in a hurry or think we smell bad. A forest service worker comes to tend something at the trail parking and apologizes that he’s not allowed to take us. Nice guy. Then two guys come to hike and say it’s just a short walk on the road. Um, no thanks. They won’t drive us, but they hand us each a Bud Light at 10:00 in the morning. Even nicer guys! 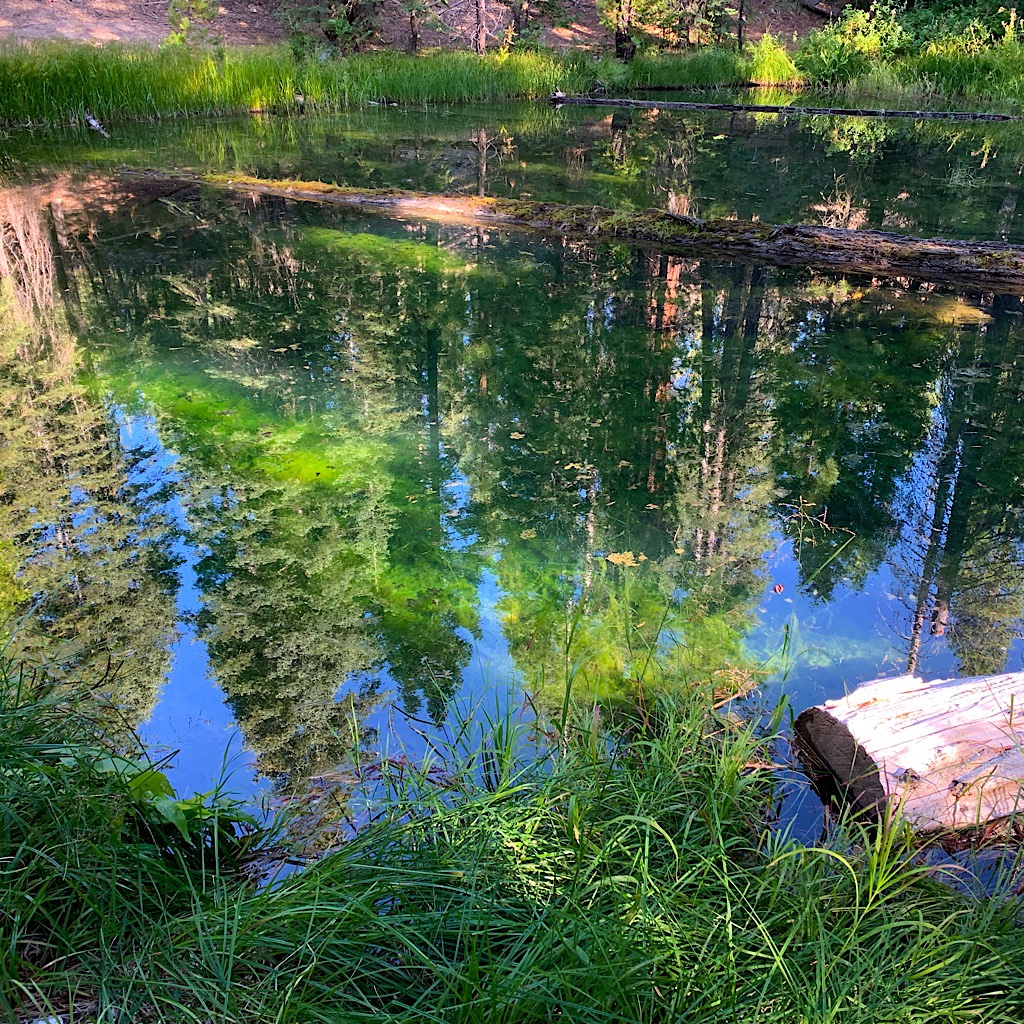 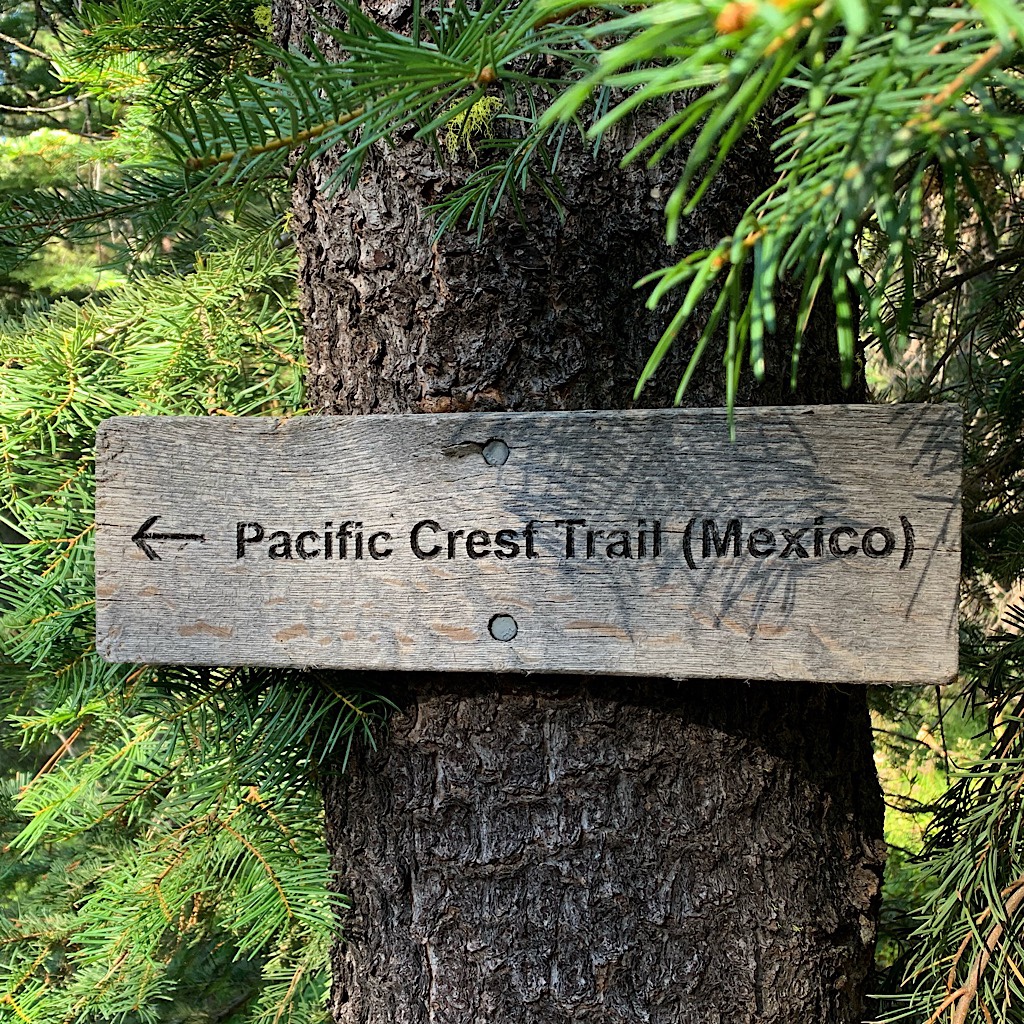 Then the real Mr. Nice Guy shows up in a snazzy car with Florida plates. John assures me it’s just a rental but happily takes us to town. We chat about his family and needing to move his mom to assisted living. He also shares how much he loves to hike too and to make sure we hike Yosemite Falls snd Vernal and Nevada Falls in Yosemite. Those are trails that hooked me forever on hiking when I was thirteen. Maybe that’s the coolest part about coming to town – meeting happy people who want to connect.

John drops us at Dollar General which turns out to be a great place to resupply hiker food. The woman at the checkout asks all sorts of questions about our hike and if we’re enjoying it. She even lets us dump our trash. You know you’re a thru-hiker when you fall in love with trash cans. She points is to the Pine Hut for burgers and shakes. Pace Maker is there and Chef shows up too. Another couple stops at our table to find out about the hike. It really feels good.

I call Richard snd he helps contact the post office for Klaus so he can send a package forward. Klaus gets a bit sucked into things, but with no wifi, I want to get back on the trail and keep moving. It’s a repeat of the morning with many cars passing before Cheryl picks us up. She actually turns around and makes a special trip to get us to the trailhead. The sky is turning dark gray, so she stops to check the weather and promises to take us back to town if it’s awful. 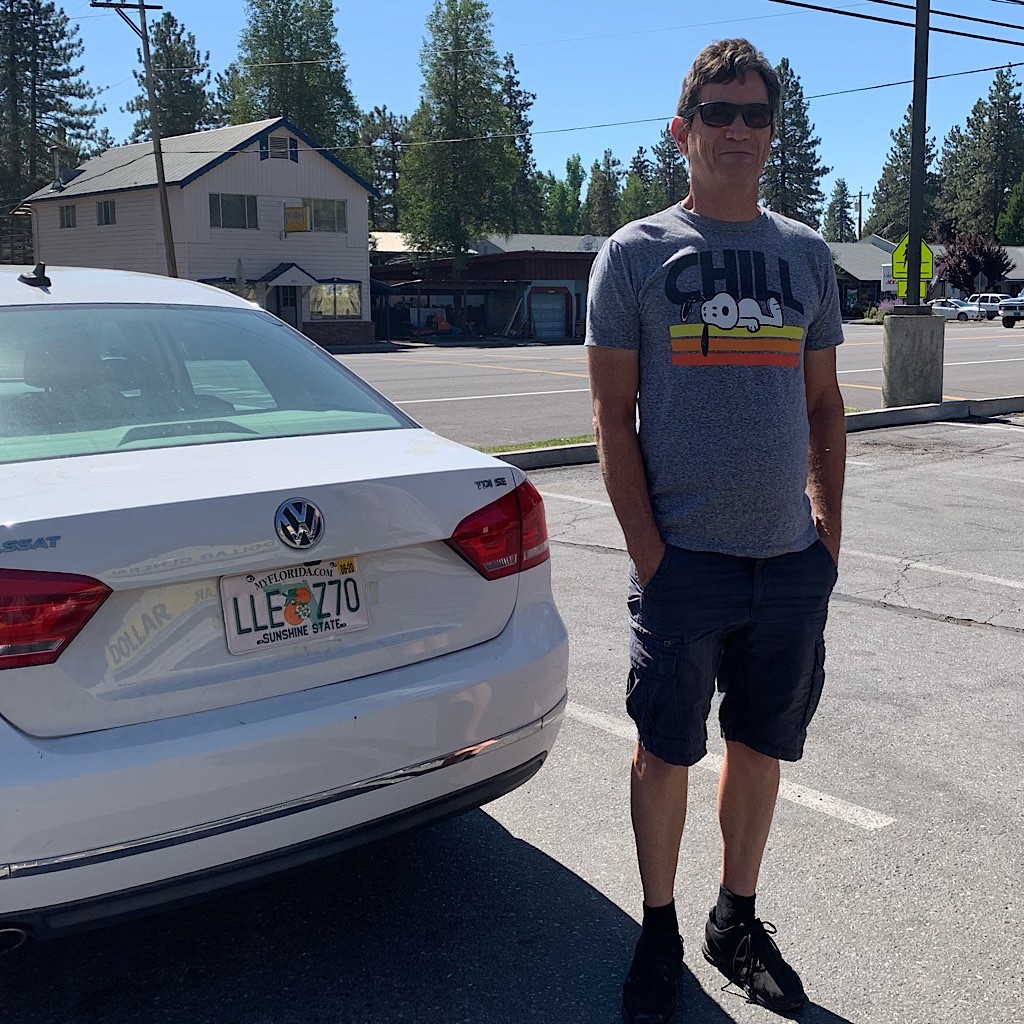 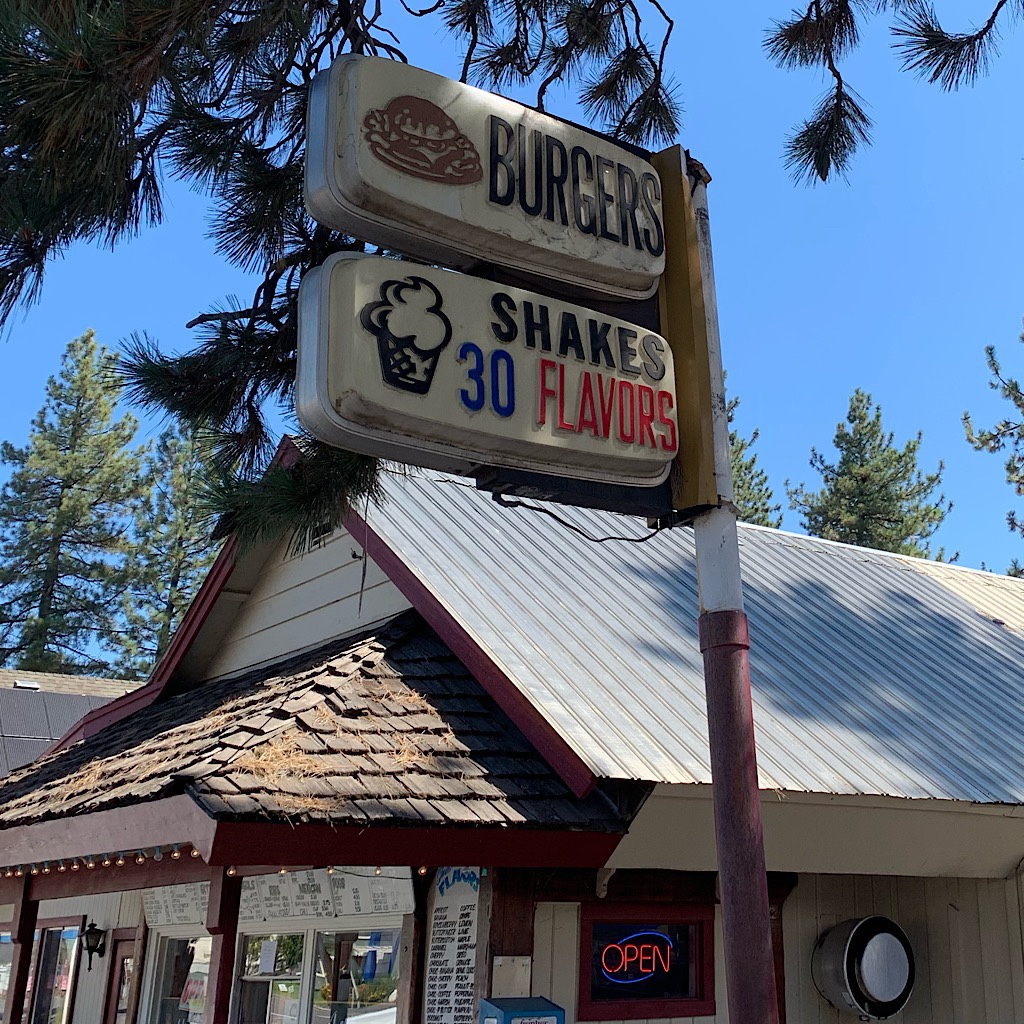 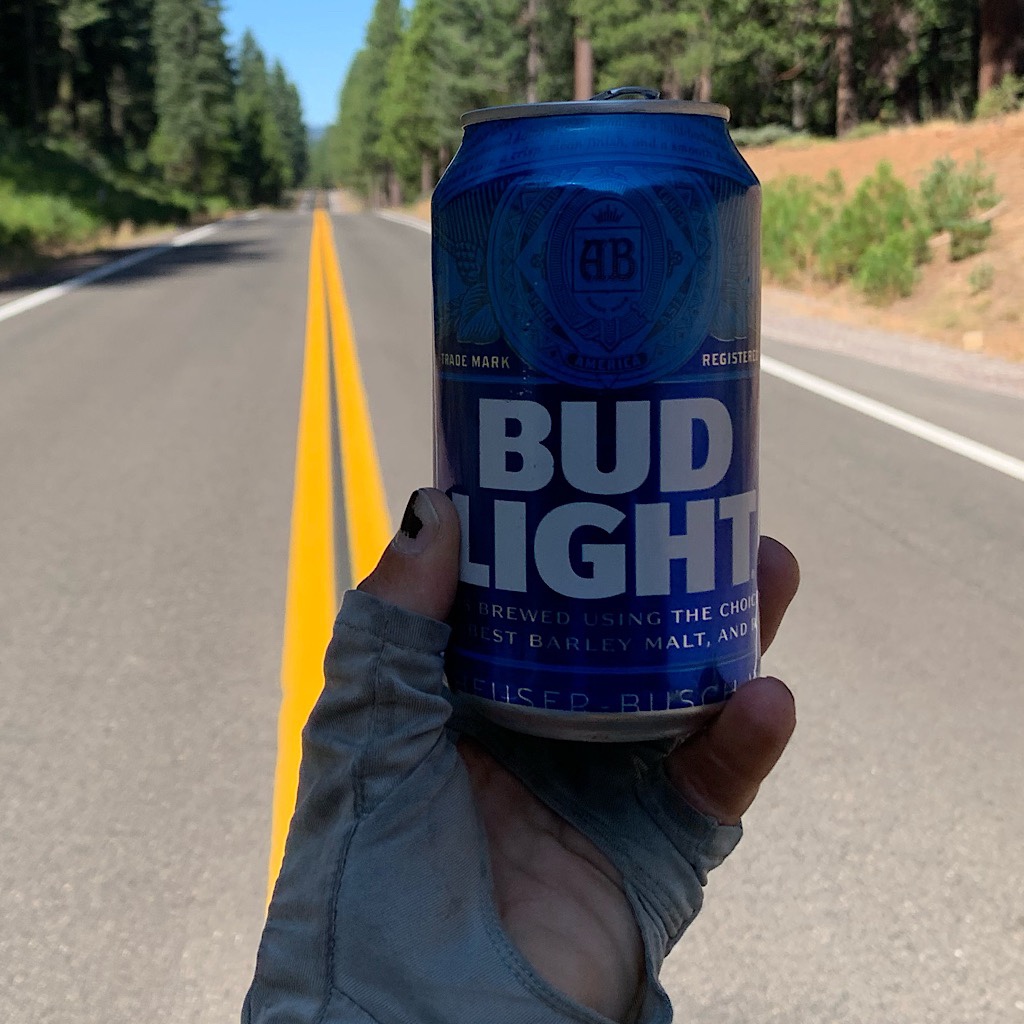 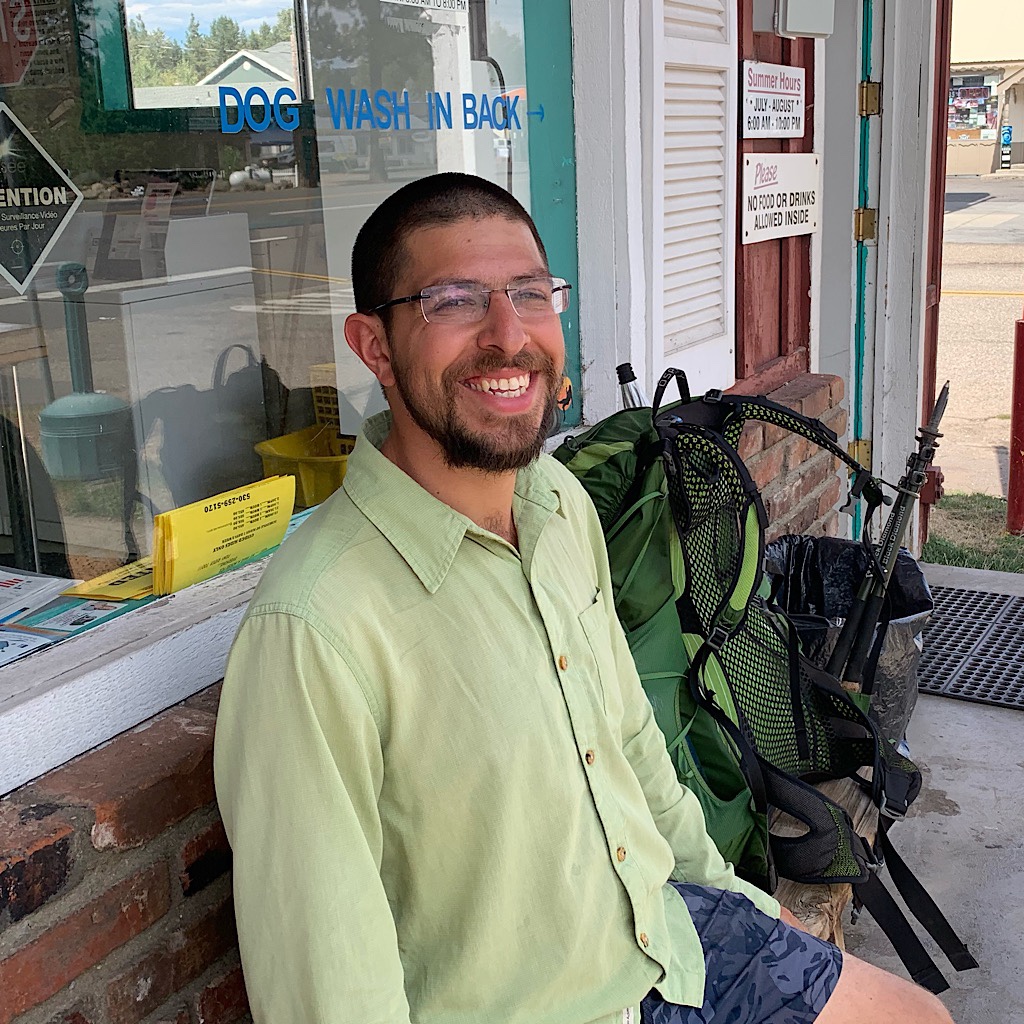 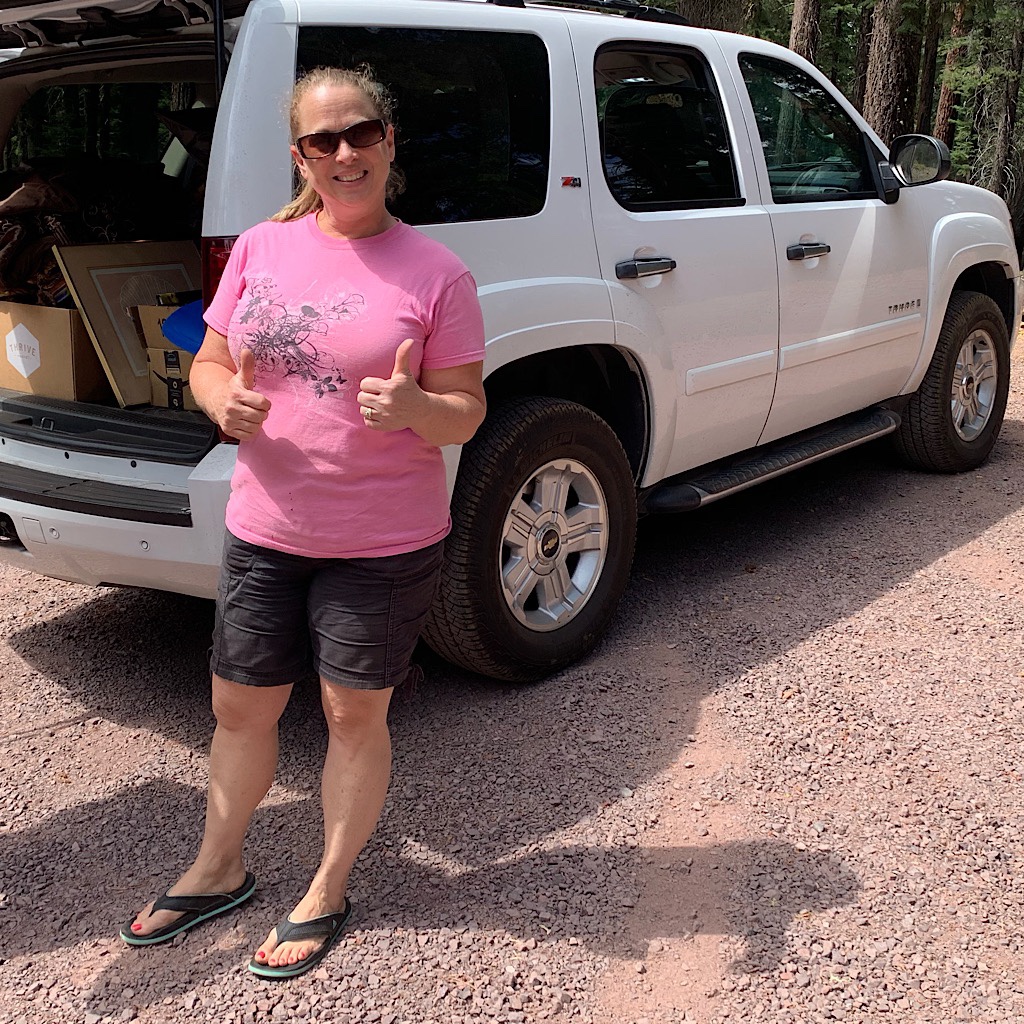 But it’s really not looking too bad, so we hop out, cross a beautiful meadow and then go up for ten miles in the forest. I think about a comment from a friend advising me to ‘doubt myself less fiercely.’ It’s hard to believe in myself at this moment in my life, but if the trail teaches me anything, it’s that it provides and things do work out. The ride will come, food will be bought, I’ll have the strength to walk and a hiking partner will appear when I need one.

We stop for water at the last source for twelve miles. Klaus is downstream and I take my shoes off and put my feet in the ice cold water as I filter. I come down to his spot when I finish and he tells me that action can be very insulting in some cultures. It’s just dust, but I realize he’s right. Even in yoga, we lay in corpse pose with our feet faced away from the teacher. He’s not angry, but instead appreciates I understand. He says I am ‘complicated’ which I don’t really understand but also that I am easy to talk to. Then he really opens up about things, in particular about a friend he’s advised who brought him a ‘contract’ from his best friend who hired him. Klaus drew a flower on the back to show its real value – none. They then draw up a real contract together and when the best friend eventually fires him (of course) he has leverage. Funny how we trust people to do the right thing, but most look out for their own interests in the end. Good contracts make better ‘best friends?’ Likely. 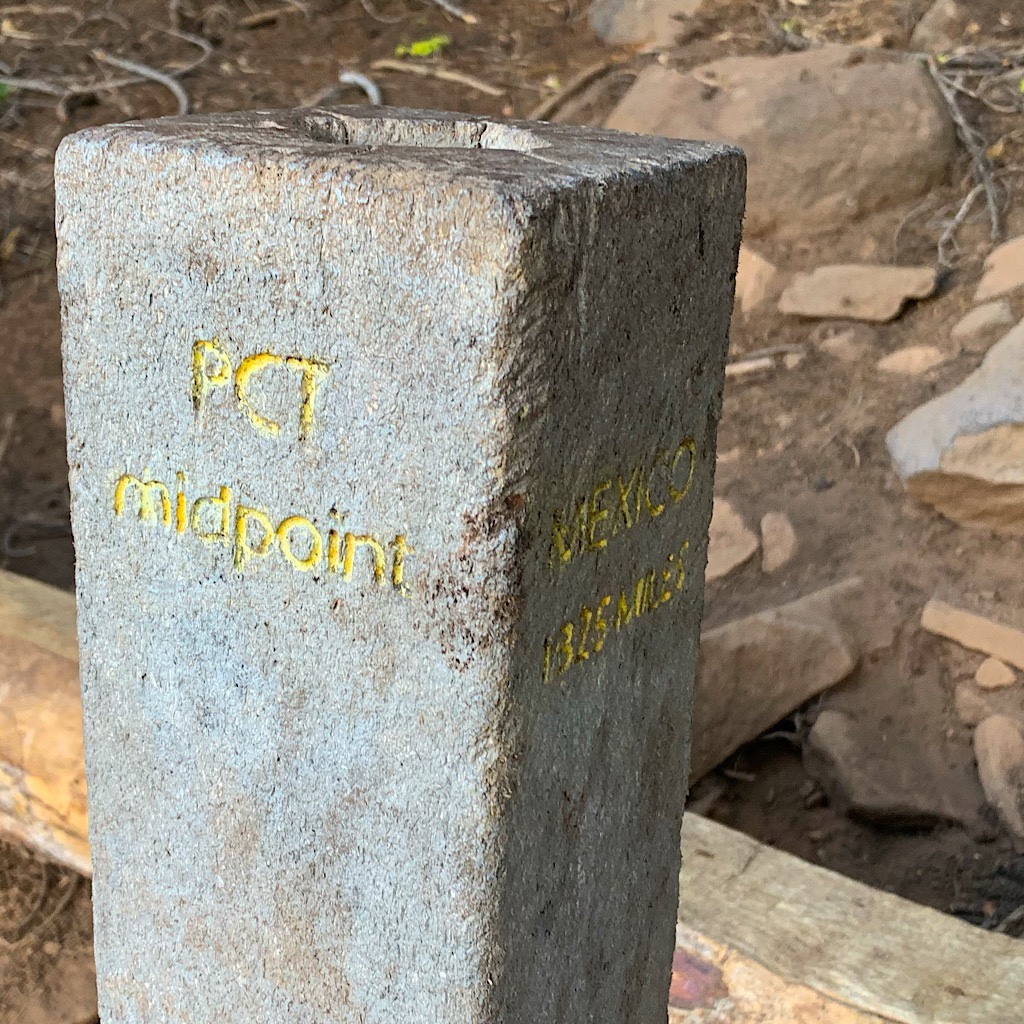 We talk for a long time, walk and talk, then just walk, It really is good. I am not sure how much longer we’ll stick together, but I see things differently, going long distances while enjoying the little things along the way.

We walk through a fairy forest of school zone green lichen on trees. Three times we’re told we’ve reached the halfway point at 1,325 miles. One of them is bound to be right. The clouds clear and reveal an enormous lake. At the top of the climb, Lassen and Drakesbad come into view, so distant now. I walk ahead to a site right on the edge, the sun setting turning the sky purple, bats fluttering and a weird streak of lightning inside the clouds. I’ve battened down the hatches in case we get rain and all cuddled in. Sweet dreams. 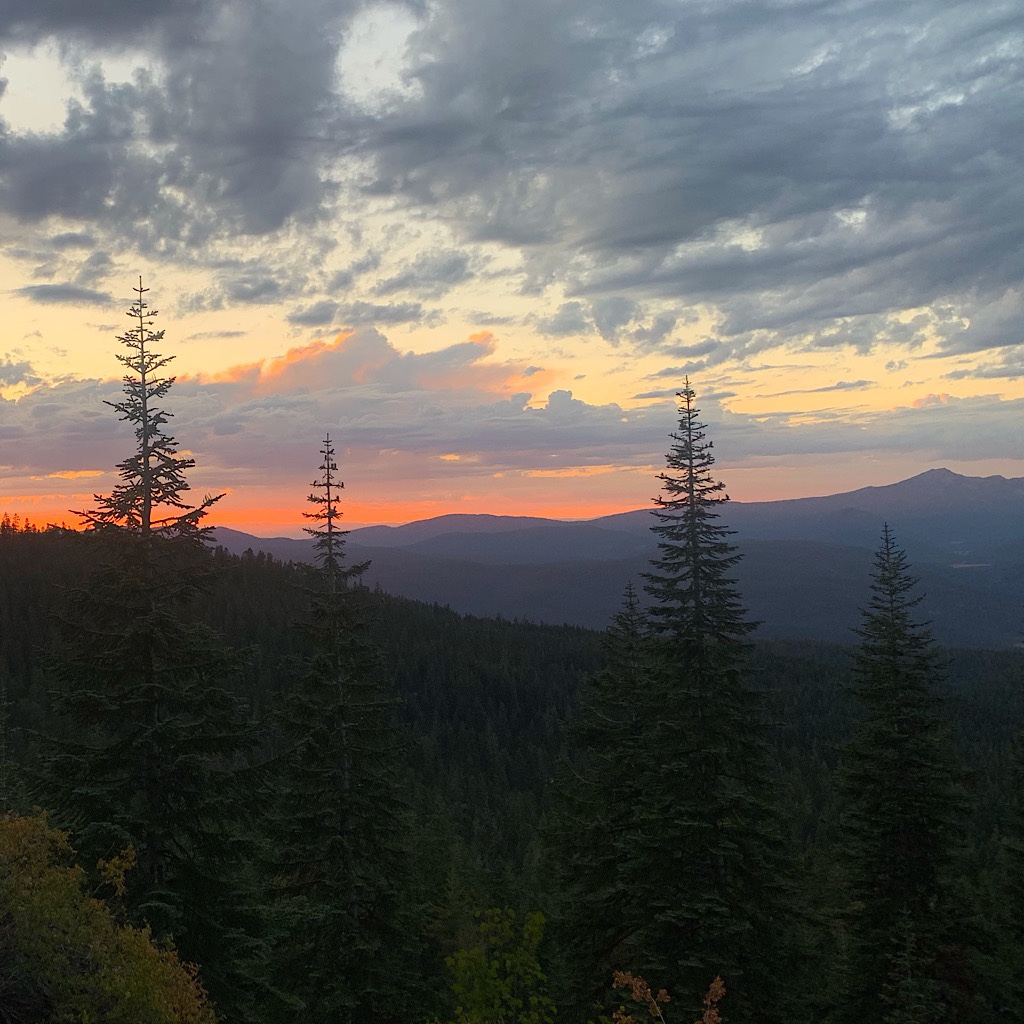