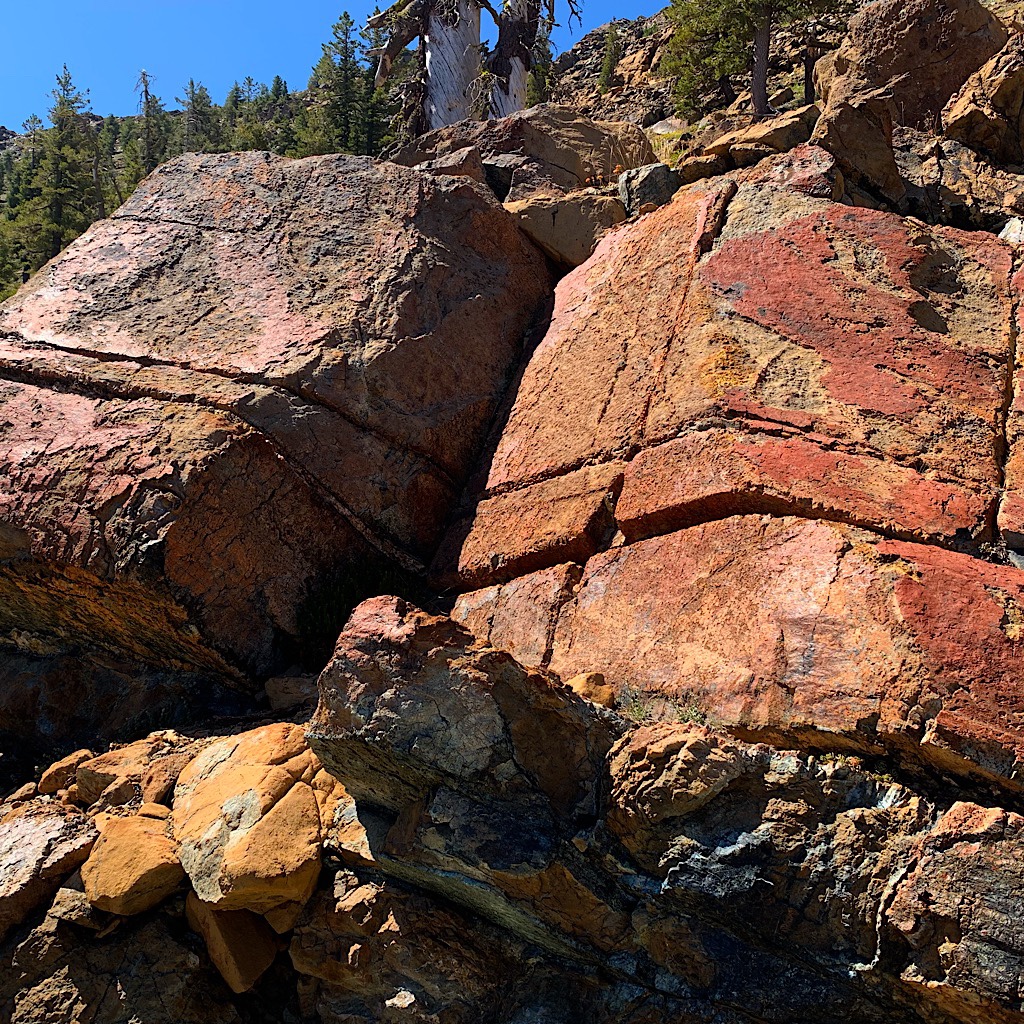 The sun lights the sky a deep reddish orange, a silver sliver of moon still in the crystal clear sky. I forgot to mention that just as I looked out one last time before closing my eyes, I see a shooting star that takes my breath away. This ridge is extraordinary, a night to remember so beautiful and still, though a few large, slow mosquitos bang into my tent. 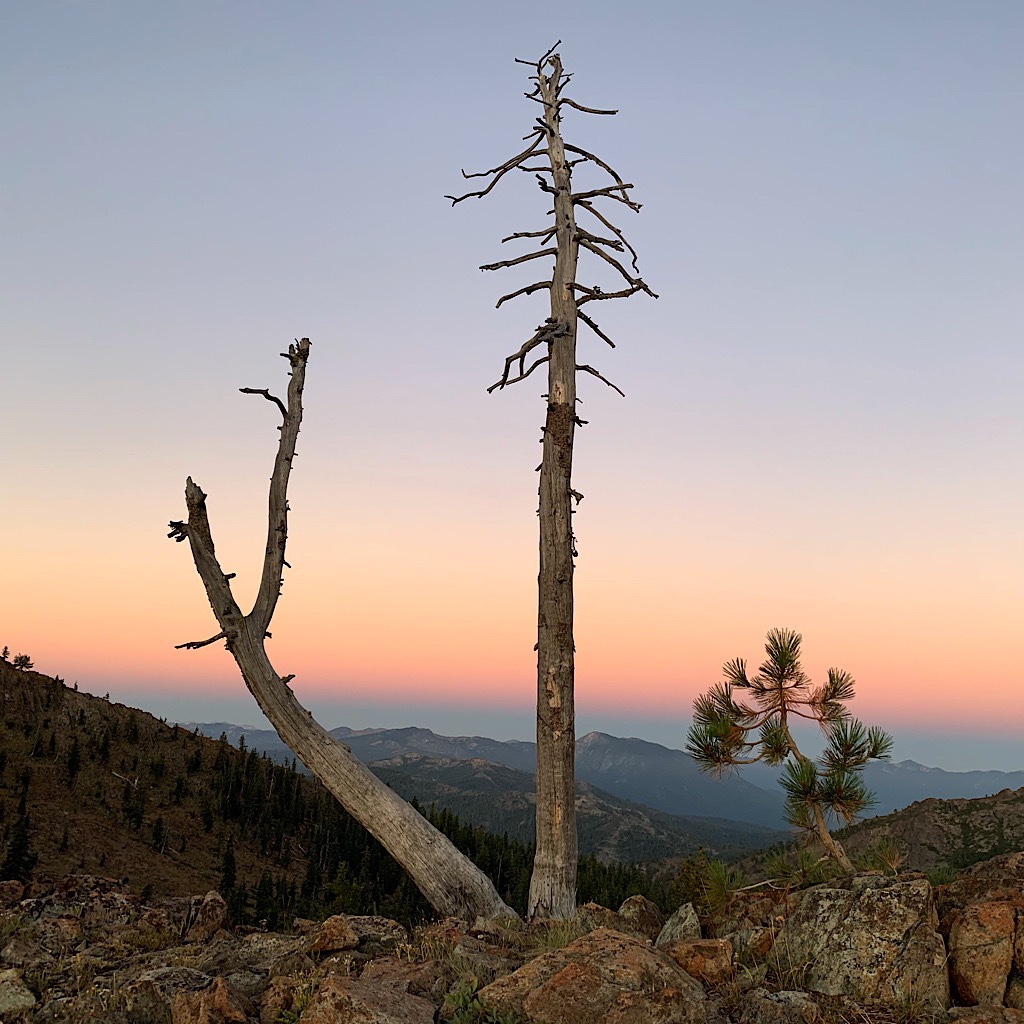 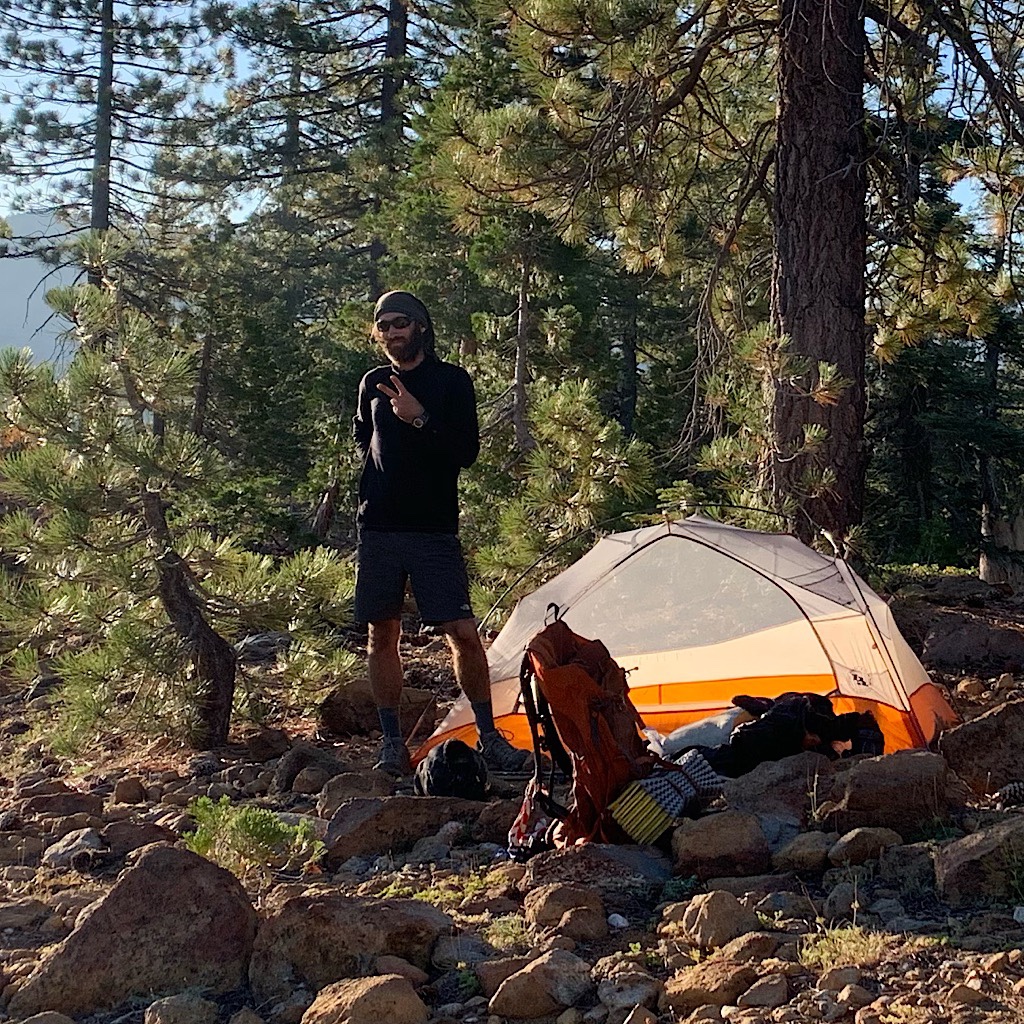 There’s no talking, but Good Luck faffing about wakes me up. An early start is good to get some miles in before it gets hot. California is a totally different world with fewer water sources and scorching sun. Richard once told me he thought the streaking in the sky when the sun is low was due to mountain shadow. I have some real shadow here, but in his case, it was from clouds. Still, I love his romantic spirit.

I hate to say goodbye, but I must keep moving as cowbells tinkle far below near a lake. I meet Moses at his tent on another small ridge. He tells me of the next sunset spot to camp that we should shoot for today. I like that he thinks I can hike the miles he can. He tells me he shoots for thirty per day. Thirty!?! I say twenty and then add some if I want or need to. It will get the job done.

Good Luck thinks like me – maybe because he’s also older but still moving well. We add a few here and there to trade for days off. Twenty on average should get us through the Sierra before the snow comes. It’s hard to imagine snow now in this perfect dry, warm weather, but the days are getting shorter and I can feel the pressure to keep moving. 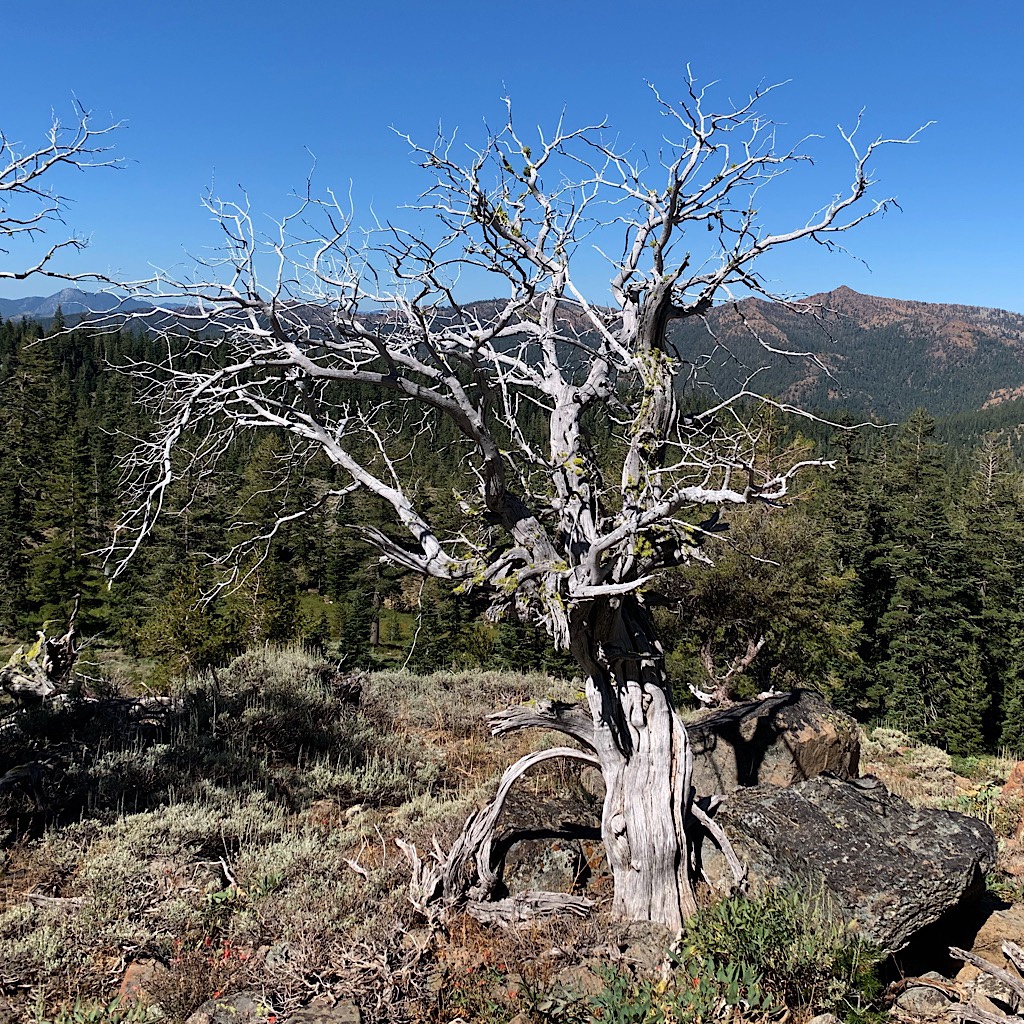 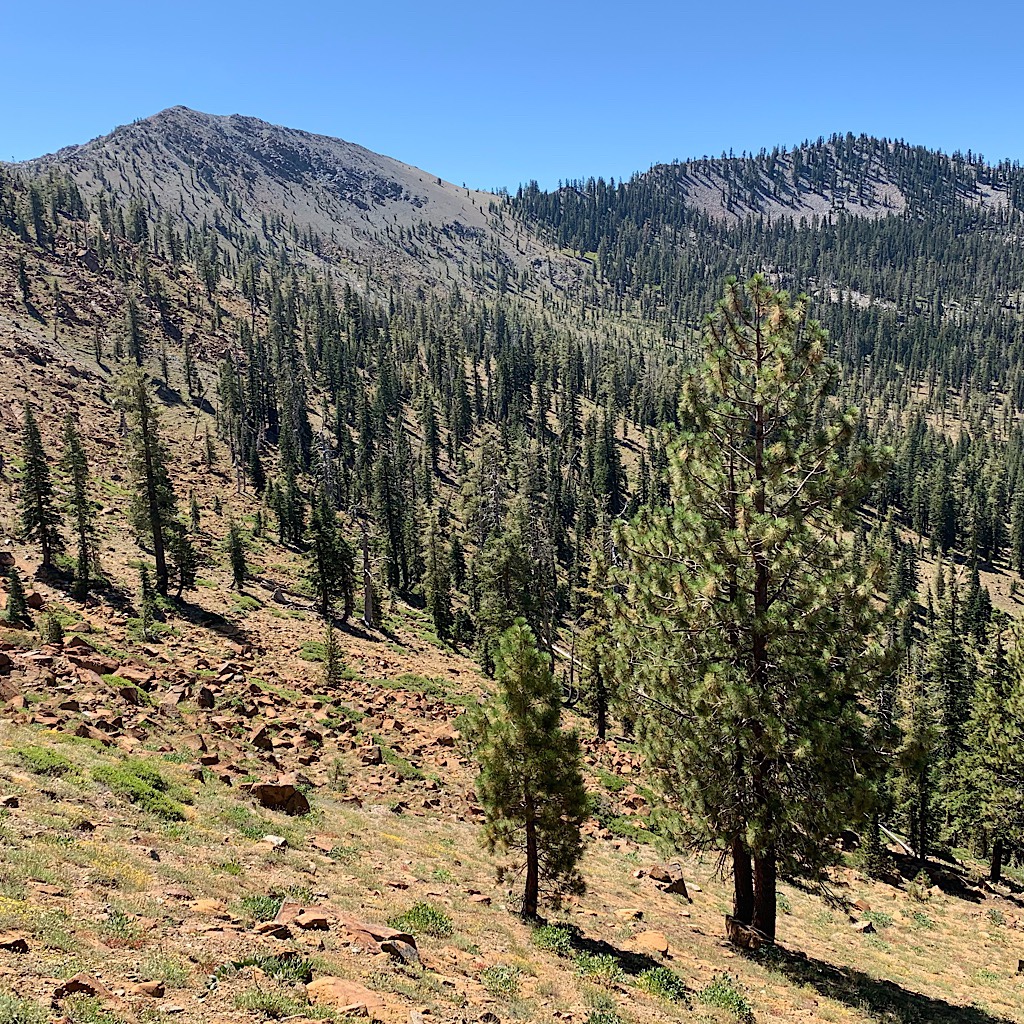 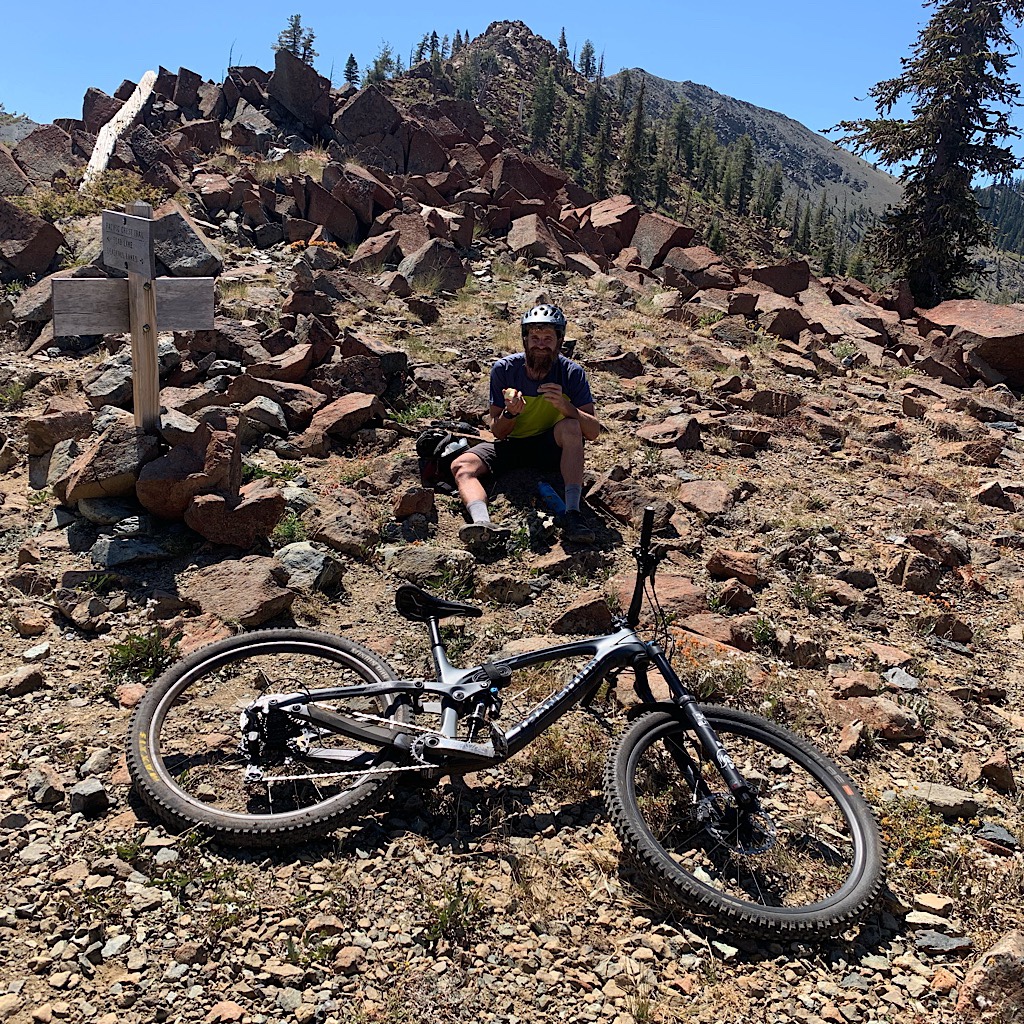 I am in the trees now, though the sun peaks through and I can see the mountains through branches. The needles glow in the sun and the air smells so good. The number of hikers is beginning to thin out and that makes me happy.

I stop at a stream for water and Moses rolls a cigarette, but offers to move downwind. Nice guy. He tells me in his thick Knoxville accent about walking the Appalachian Trail and how his girlfriend left him at that moment. The walk was grieving for him and he says reaching Katadin was very meaningful. I wonder if I will walk to the end and if it will feel meaningful using each step to move on.

I reach a parking lot with a pit toilet and paper. It is nice to sit. The small band of hikers eat in the shade but I press on to the next water, sidling a mountain on a ramp with a view back to the Trinity Alps. Chef catches me at the tiny stream crossing the trail. He is very analytical about his pace and also his calories. Such a cheerful person, he says he brings a pint of olive oil with him and offers me some at lunch which he suggests at a lake in six miles. 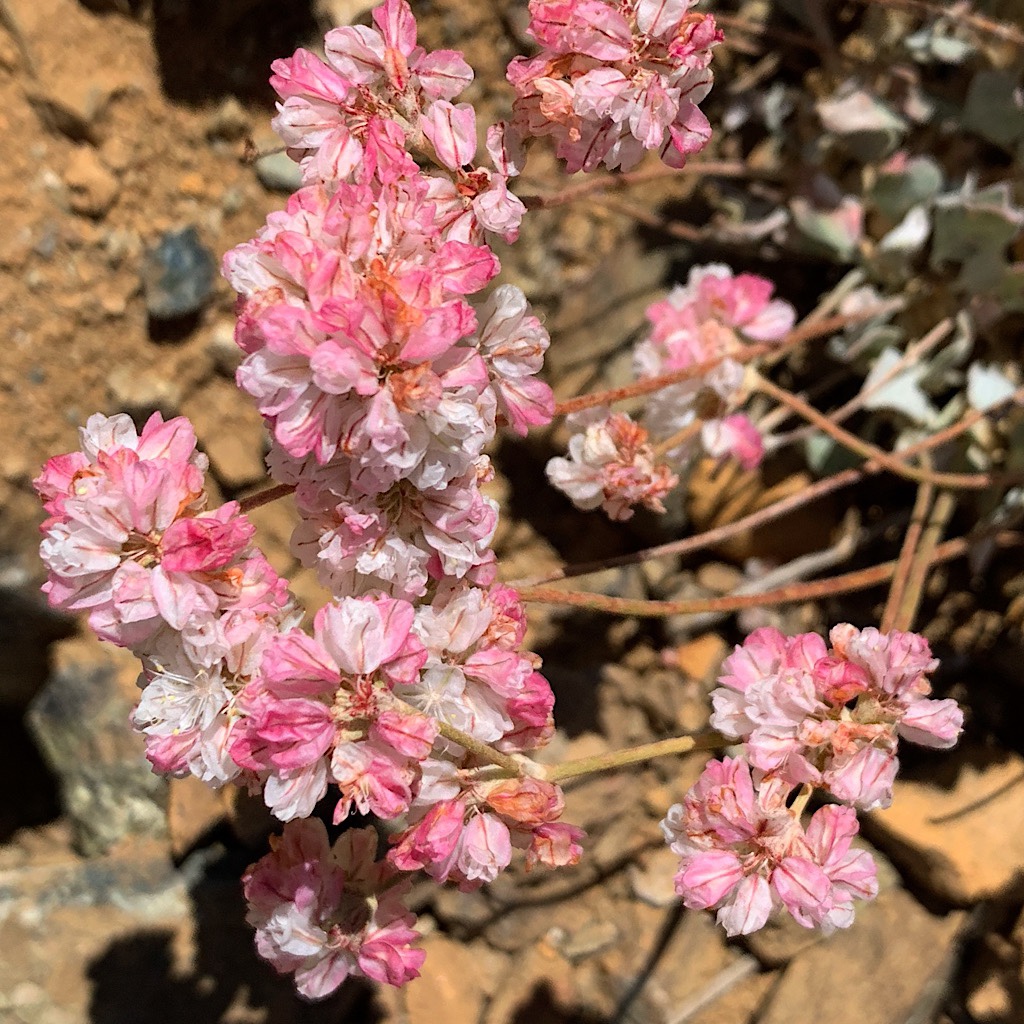 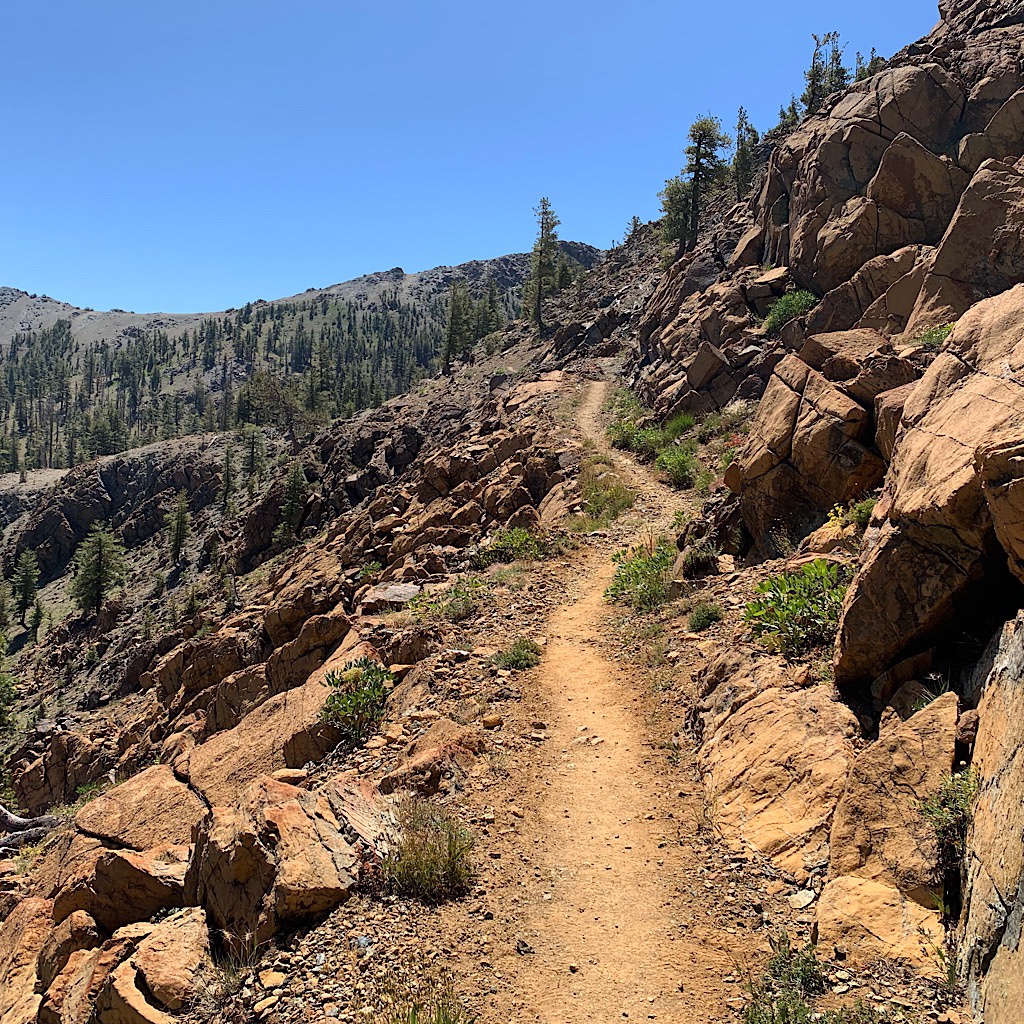 iIt’s a long walk up past two deep blue lakes and onto a rocky trail. Sage is thick here and the grasshoppers click and jump in and out of the trail. Something rustles in the manzanita as I pass; a rattlesnake? The trail is serpentine here causing me to feel like I’m going in circles. I come to a small pass and see a man with his bike, assuring me no one rides on the PCT – at least not this time of year.

Another man comes up behind me and I let him pass. He then peppers me with questions – What’s your name? How long you out for? I ask him his name in reply but do tell him I’m here all summer to hike what is called the Pacific Crest Trail. Is it just me or have people lost the art of conversation? Maybe ease into it, bud, by introducing yourself first or try a compliment or something self-deprecating. I hate to be oversensitive, but, “How long you out for” implies he doesn’t think I can actually be a thru-hiker or he’s just trying to get me to ask him to talk about himself. He might as well ask, “What’s your major?” It just gets on my nerves.

He leaves and the Japanese man, Dao, comes by on the most beautiful section as Shasta finally comes fully into view. We notice we have the same shoe, La Sportiva Akyra, and I take a picture. Maybe that’s just it – here we are in one of the most stunning places, and I have to be passed by Mr. Boring Question Man, who it turns out didn’t have one good reason to rush up that beaut of a trail as his wife was way behind and he ended up waiting for her. 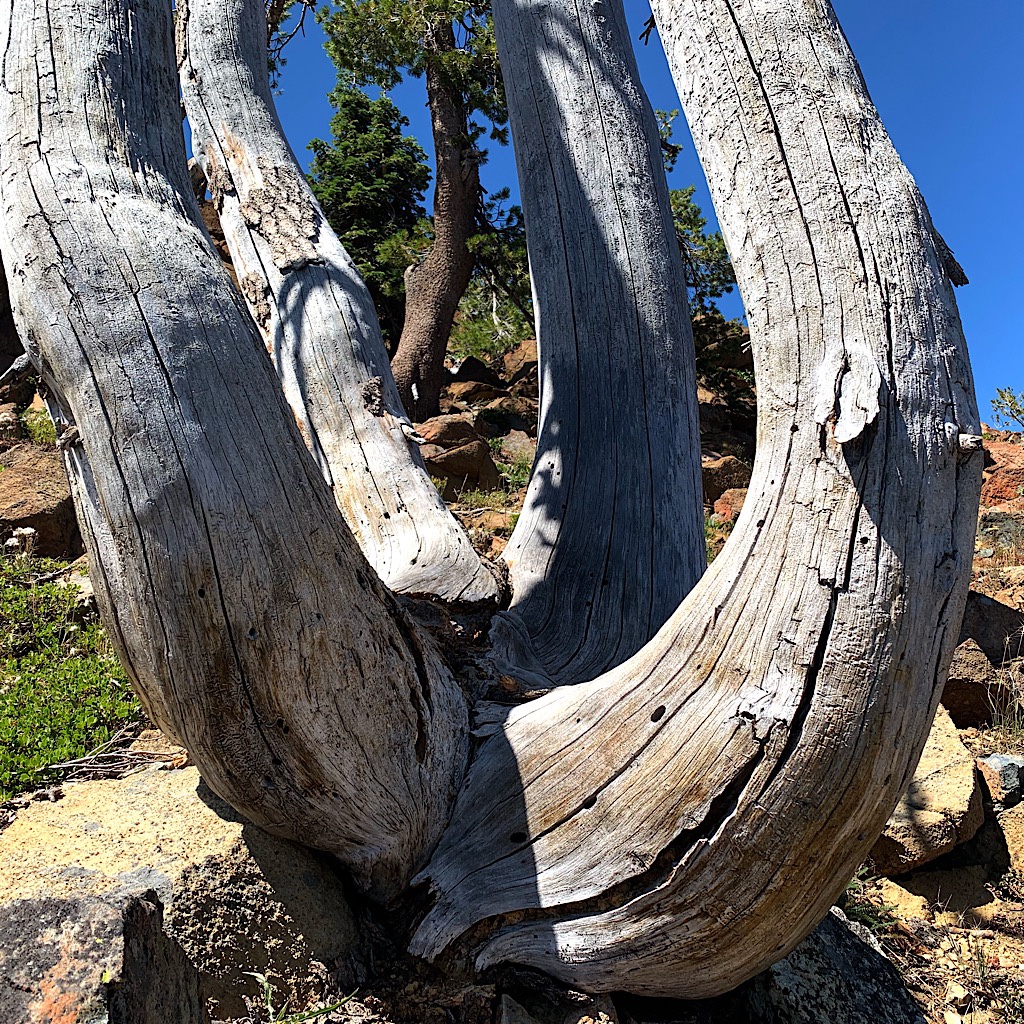 Just how beautiful is this trail? Red dusty trail created by red rock, ponderosa and jack pine, views completely open to the mountain in purple with white filigree snow. From here, I notice his hump – what hump? – to the left, gracefully rising towards the bundt-cake shaped volcano-mountain. I have been hiking towards him for days and days and finally, he is showing me absolutely everything.

I pass over into a bowl with a gleaming turquoise lake below – although not my lake. Porcupine Lake is further on as I round this bowl and get another look at Shasta’s glory. It’s a spur trail up into a rocky amphitheater, a pre-Sierra of gleaming white rock and inviting water. I meet two hikers, ‘Snots’ and ‘Oh Well’ here, a little trail romance. I get in and clean my toes, soak my skin and dunk my hair. In this dry heat, it is absolute magic. Chef and Good Luck join in, barely able to pull themselves away from the big sun tanning rock. I have some olive oil with noodles and it does seem to fill me up.

I most certainly could spend the day here, but we agreed to try to make it to the campsite-with-view, but it is getting late. I dress and head to the next water, fearing I’ll need to carry a supply ten miles. There is a spring closer to the campsite, but 1/3 of a mile off trail. This is when thru-hiking becomes a compromise. There just isn’t enough time to linger over every bit of beauty. I hated to leave the lake, and now I walk on a stunning ridge with phenomenal views of Shasta as well as craggy ranges in the distance layered one after another.

I simply walk through and look then push on towards the final spring. The trail veers to the other side of the ridge, seemingly going backwards. I walk a ways with the young couple talking about long haul trucking. At the spring they hand me their bottles in trade for EmergenC. Down I go, Good Luck finding me deep in the forest getting water for me and the couple. We both start to feel pressed and nervous as the sun begins to set. It’s three miles to the site, but there are other spots on the way up.

We push up, heavily laden with water. The first spot is not so interesting in the woods. So we head to the second. At first it seems impossible, but as I come over the rise, I look straight into the movie-set creepiness of rocky Castle Crags. Not bad at all. Good Luck wants to push on, but I tell him we have 20 minutes of light left.

I guess we both feel a bit disappointed, so we decide to head up to that site – which is only a mile away – and see the sunrise. Lesson learned that you have to live in the moment and be willing to sacrifice other possible moments. That ‘perfect’ site will be there for another sleep over. Right now, the stars are out and I am off to sleep, so happy I took a mini detour for a perfect lake.