The night is cozy and I sleep soundly. California shows its different light just as I wake up with an orange glow on the cedars. I get going quickly, seeing bright white, nearly bleached, objects thinking they’re discarded toilet paper when in fact, they’re pieces of white quartz strewn about this hard-packed dirt.

I am loving the silence and solitude of the morning as I pass a tent set nearly in the road, a bit of rustling going on, but I float past silently. I’m startled by a hiker passing, just an ‘excuse me’ is what I hear. I get a little miffed at the tiresomeness of it all, everyone in a hurry and not even a hello or a smile. Isn’t the guy curious or interested in community?

I grumble to myself up the next rise and catch him looking out on the view of mountains in blue waves. I know I’m getting old because I sound it, giving him a bit of a rough time about not being sociable. He reminds me he did ask how I was doing and I’ll guess he must have but I was too focused on being miffed. We introduce ourselves, he’s Jay but I immediately forget his trail name – something to do with Jay. He actually turns out to be a nice kid, in smart glasses and a heavy beard. 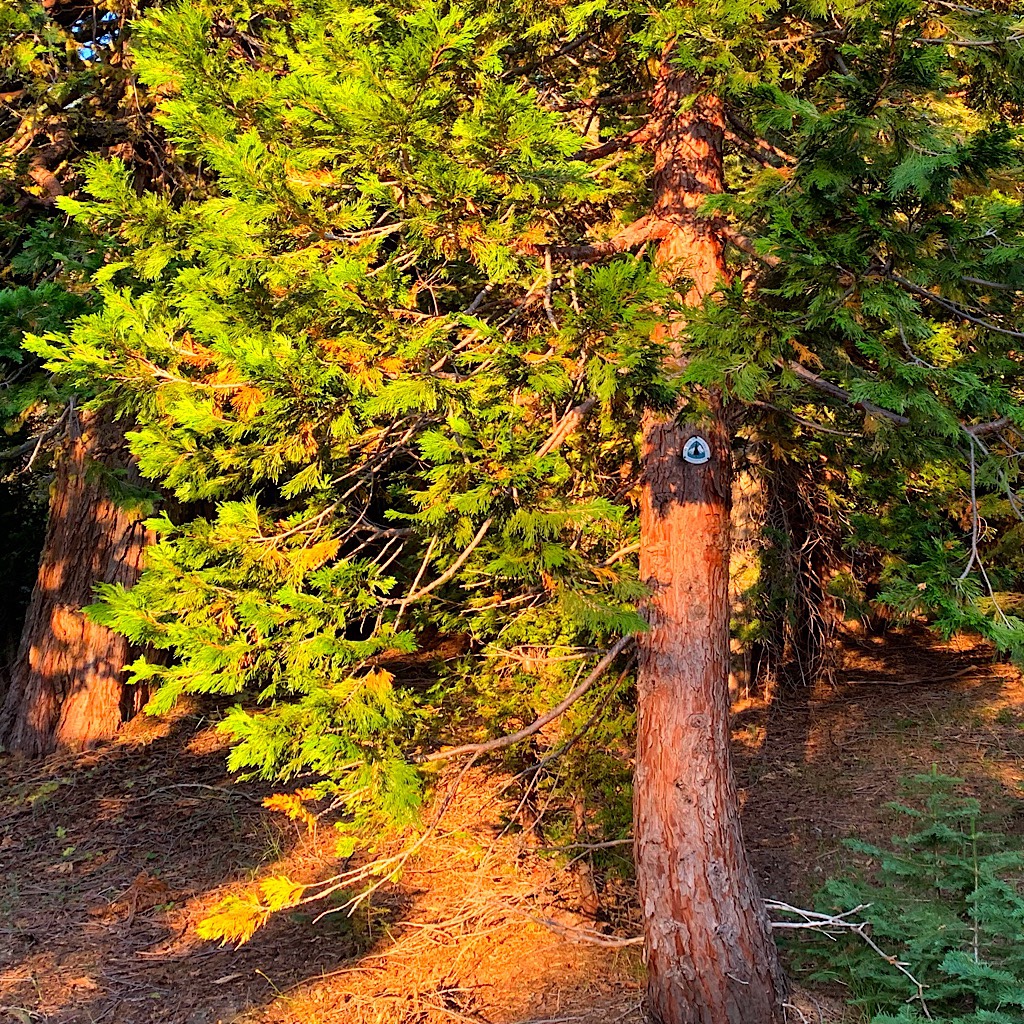 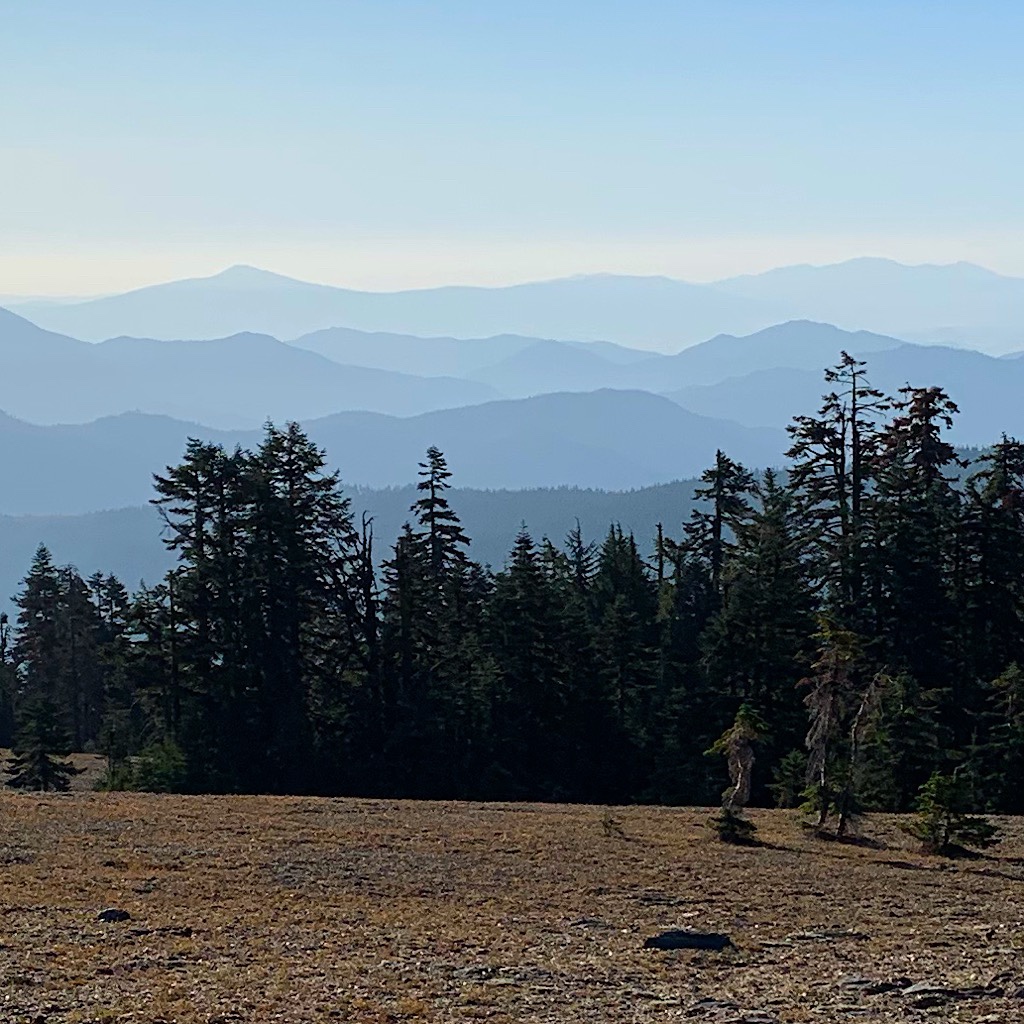 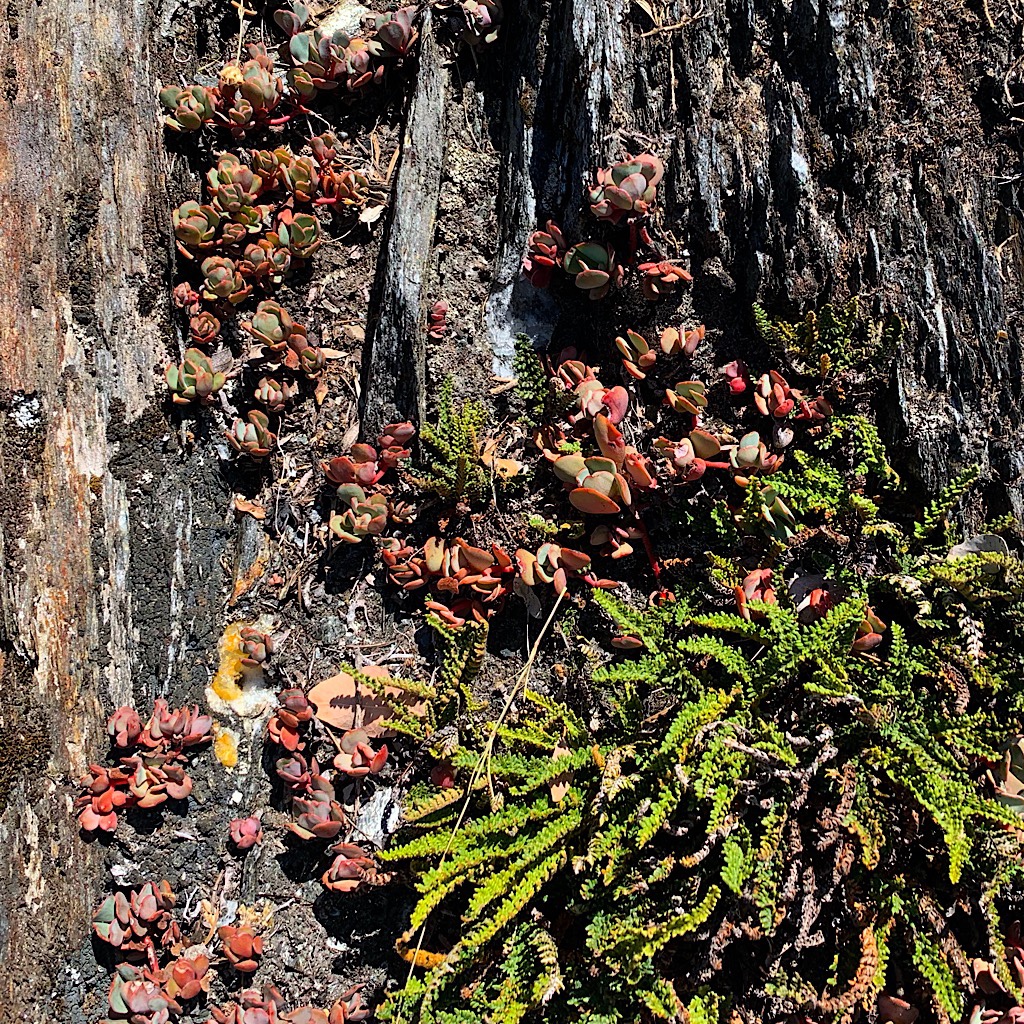 I see him again ahead, as I pass a water source. By now, I think we’re friends as he smiles and seems relaxed compared to most hikers. The sun is warm and I begin walking on an exposed ridge with mountains on all sides as far as the eye can see. There’s a cool breeze and many dried cow pies.

I hit my 1,000 mile mark on that ridge. Seems only yesterday I walked north to Canada from Hart’s Pass before turning south and officially starting the trail. I set a goal today to heal the muscle pain in my legs. I have it because 1,000 miles is a long way to walk, but more specifically, I’m fairly certain it has less to do with how far I walk than with how I walk. I started feeling shin pain after a day of fast walking with G-Punk. Then, I exacerbated it when I carried a resupply of food plus two liters of water.

So I’m setting a much more ‘sauntering’ pace, one John Muir – who hated ‘hiking’ and preferred walking more slowly and taking everything in – would approve of. I’ll also monitor my carry, especially food, to keep the load under control. 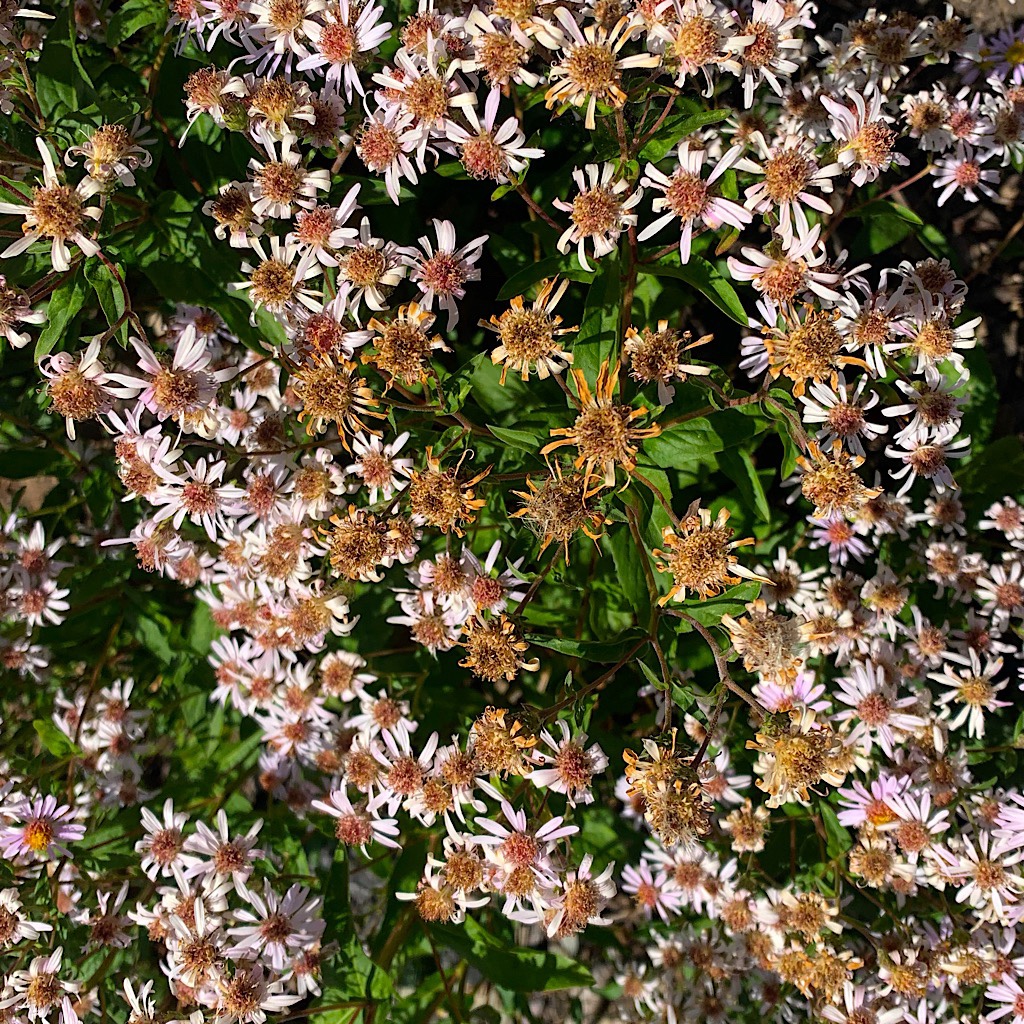 Staying healthy on the trail is not easy. At the outset, I could barely get through the night because my muscles would cramp. G-Punk introduced me to magnesium powder and I’ve been drinking a dose every night – and now also taking an advil. It seems to really help, but the magnesium is giving me a bit of diarrhea, so I have to ensure I get the balance right and drink enough water. I’m also stretching and rubbing out the sore muscles, and as this morning progresses, I am moving well and without pain.

A large grouse sprints across the trail. Why? To get to the other side. of course. It’s dry and nearly barren except for a field of ferns at nearly 7,000 feet. I was corrected yesterday that these clackety hopping/flying creatures are not crickets but grasshoppers. One overzealous of the bunch hops into my face, but I like the feel of his little body. Their clicks are old-fashioned sprinklers – short-short-faaaaaaaast. 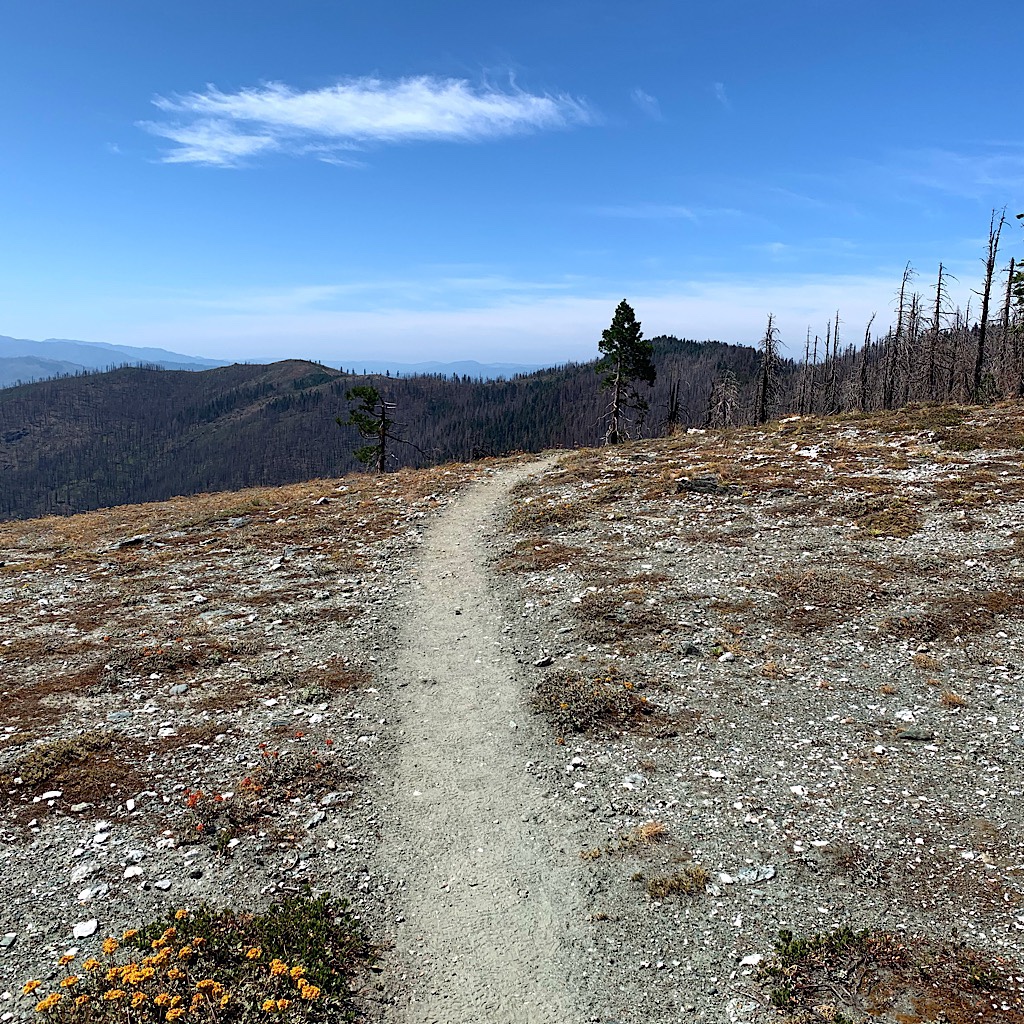 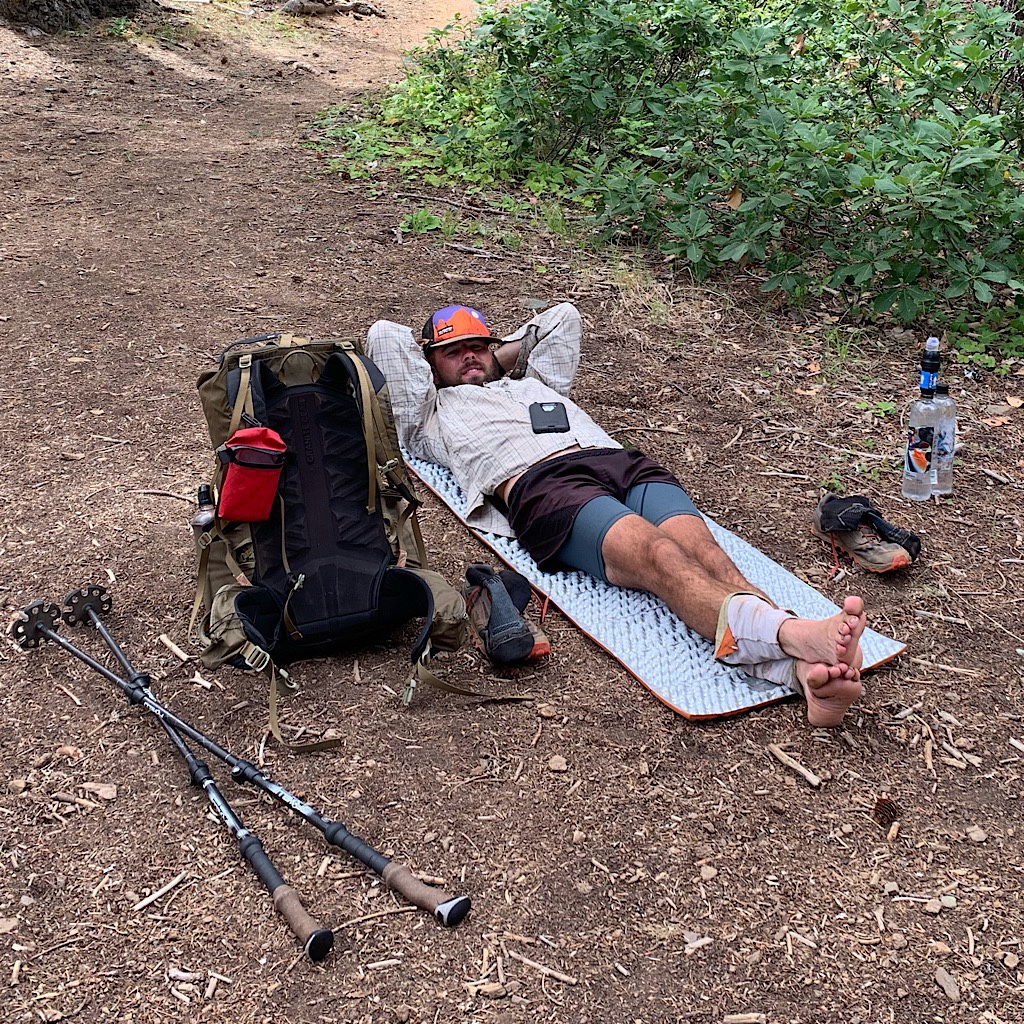 The air has a sweet sage smell, scrub oak abound low to the ground with tiny fingered leaves. It’s thick with wildflowers, the lupine have gone to seed, rattling like maracas as my thighs hit them. Several hikers pass complimenting my hat. I look out to a dusty, barely visible Mount Shasta.

I’ve come a long way on one and a half liters and I know a spring is coming up. I ask an Aussie in a Mount Whitney cap the directions, but alas, he gives me perfect instructions for the next water source after the coming source, 5 1/2 miles away. I feel ok with the mild temperature and cool breeze, so I press on right into a burn area.

There is something tragic in seeing the graveyard of such splendid trees, and yet I find the burned areas absolutely magical. Each has its own feel, this one crowded with lavender and yellow daisies plus a white bunchy flower, dried to a rusty brown. Bees are working the flowers as chipmunks and birds go about their business. The forest is hardly dead, and the sun comes at an angle, allowing for long shadows. 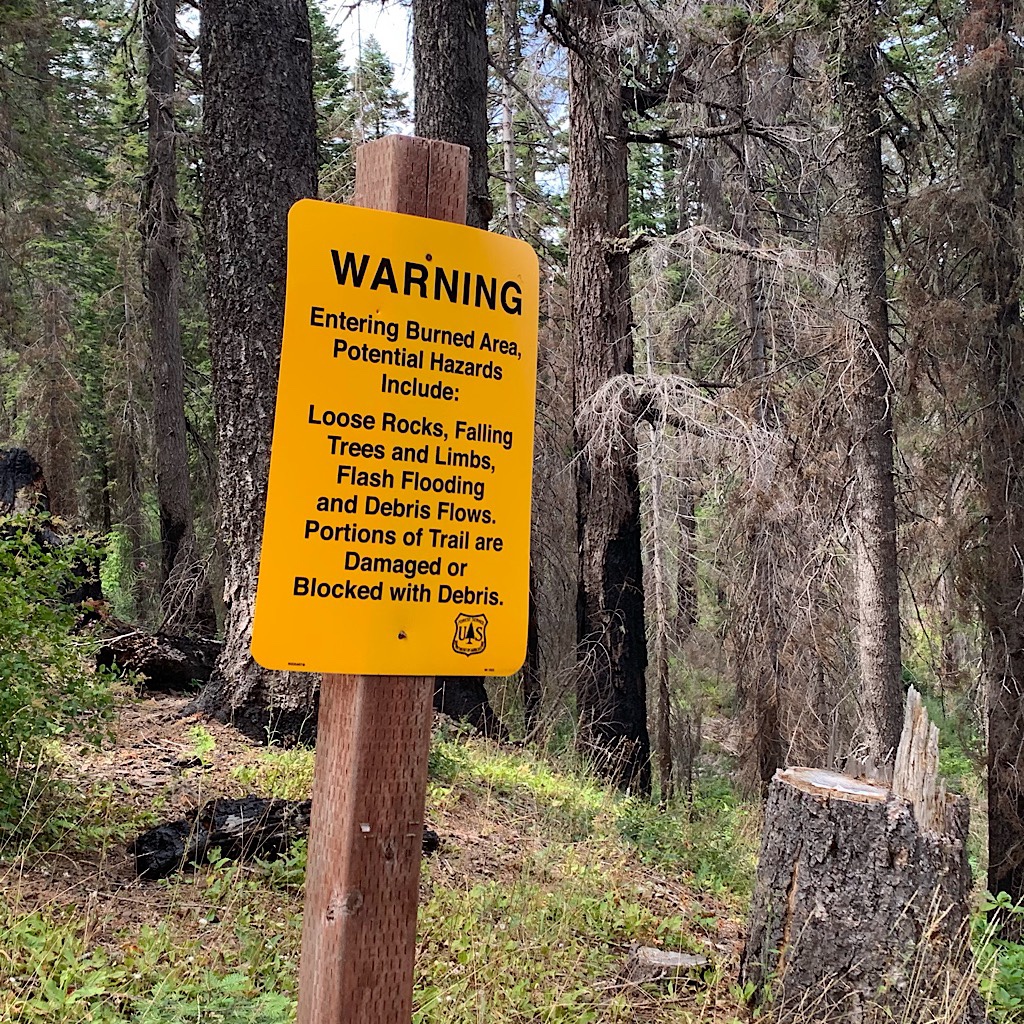 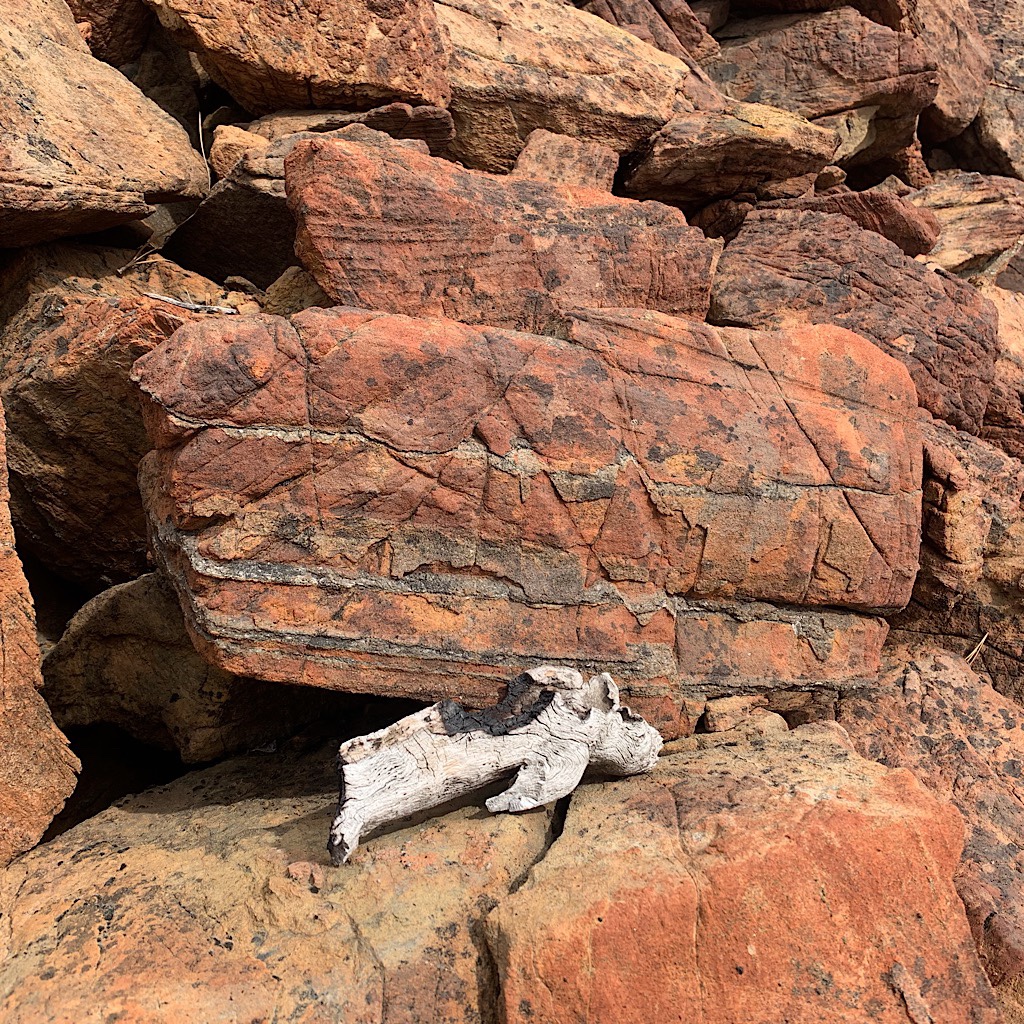 I climb up high in this forest, then take a break to sample some of the strange bars I bought, one, a full day’s supply of vegetables, the other a ‘keto snack.’ It’s a long way down on zig zags and up and over small humps of land with extraordinary views to surrounding mountains before I reach a forest road and a short spur trail to a spring affixed with a pipe.

I sit in the shade and immediately drink two liters, then grab one more for a big ascent. A man who calls himself ‘Dude’ has my same Granite Gear pack without the lid. I tell him that’s how I used it in New Zealand, but I love storing my head gear in it. If I lost my ponytail holder, I’d be done for I tell him. He laughs and wishes me luck as I head up a mountain, my last climb of the day.

I can hardly believe that it’s even more beautiful than my burned forest, gorgeous red rock creating red dirt for my feet, Ponderosa and Jeffrey pine and views for miles. I think about my little activity at the piped spring – writing an ‘unsent letter’ to a person who was particularly nasty to me this spring. What a fantastic exercise this is. I include biting and sarcastic wit and say things like, “I forgive you because I don’t need you anymore,” with all the self righteous indignation I can muster. The odd thing is that an unsent letter allows me to laugh at myself and my need to have ‘the last word.’ When I write it out, I sound ridiculous and I realize I don’t really need to say these things to have closure. That being said, I also can glean what is true and worthy of me – what has deeper or more lasting meaning like my integrity, my ability to forgive and my strength in moving on. As I walk on this balcony going up and up right into a huge crag, I realize I don’t care about this person’s mean little self anymore.

Lizards scurry in and out of the trail. I am not sure why they run right into my way before hiding, but I like seeing them. Moody clouds are building and this entire ecosystem looks different – lots of rock, but also lots of green. I come to a lake named Lilly Pad Lake appropriately. The trail stays above it and takes me on another ridge before dropping me into Kangaroo Springs, which I walk right past and have to double back to fill my bottles. The water looks like a puddle, but is spring fed and delicious.

I can camp here but it feels early and something tells me to move on. Up and up I go, finally over a rise and I’m bombarded with a spectacular view of jagged mountains receding into the distance, the sun behind a cloud casting an eerie light. Over a small section of burn, I can see over to Shasta too and sitting there is a young hiker. It’s Sharoon from day 1! He tells me he is now called ‘Hot Pants’ after drying his soaked underwear over his cookstove in rainy Washington. I am so happy to see this lovely young Aussie. He is friendly and lovely and it’s hard to believe we have just been a day apart this whole time, so never caught up.

He scoots on ahead and I saunter along on this high ridge. I see a possible site at the top, but the wind is blowing and it’s exposed, so I head down beautifully engineered switchbacks, built with stone reinforcements and head to an officially suggested spot. I notice a possible place with a sensational view, but the spot is a bit overgrown, so it’s a steep descent to – nothing! I look everywhere, but find no site and no view. Back up again to the overgrown spot, but not until I say hi to Jay and grab his picture in this amazing light.

I get back to the spot and clean it up a little, filling in holes and hoping no creature tries to get at me at night. The alicoop is up and I cook with the sunset. A couple of guys hike past and one wants to chat. He gives me lots of beta for what’s coming up. Two more Aussies head up singing loudly and offer me a Coors for a hug. Worth it, but they smell awful! Finally, ‘Pace Setter’ comes down and I tell him I now have met his friends, not knowing who he was referring to before when he used trail names. I feel elated because there is community here and I am actually a part of it (because they talk about me!) 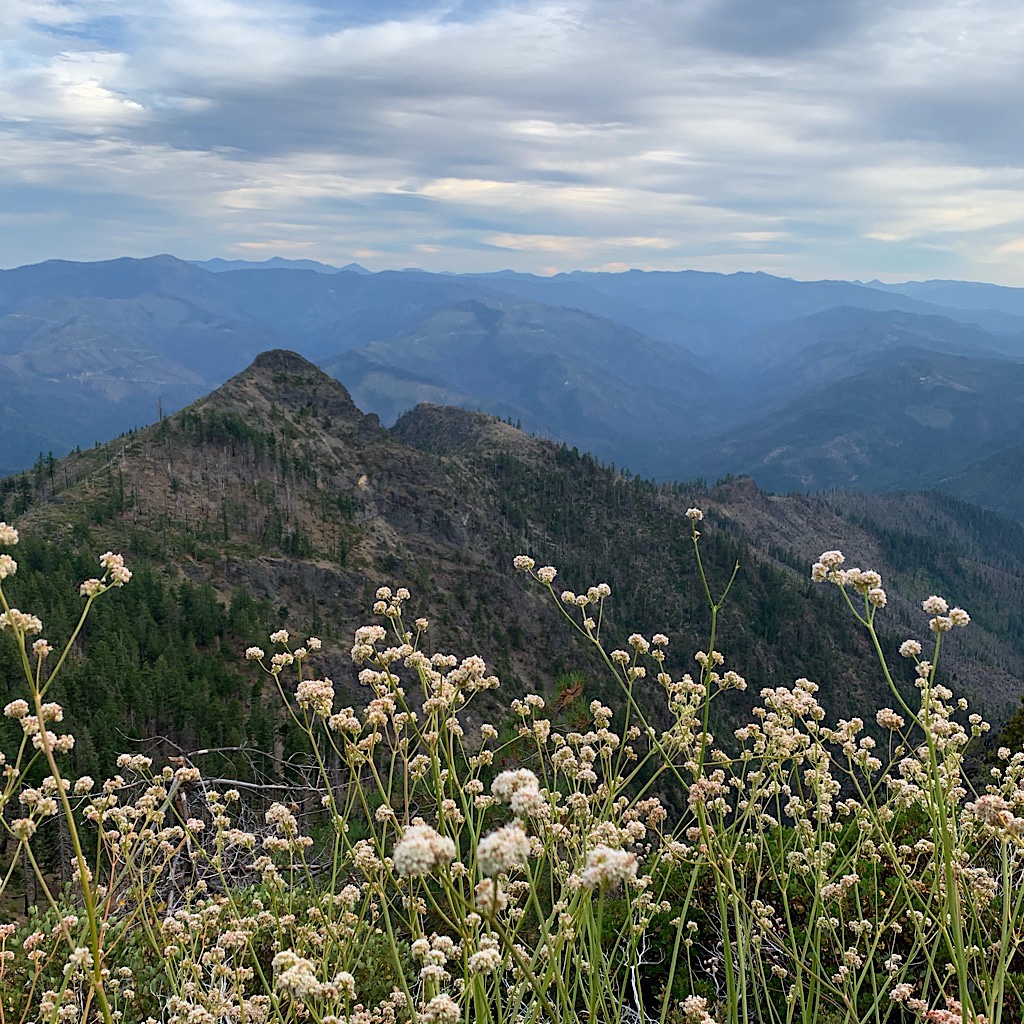 The stars are bright tonight, the wind is high up in the trees, crickets are chirruping and my legs feel wonderful. Whatever I’m doing is working, so I’ll do more of it. Good night.