Without leaps of imagination, or dreaming, we lose the excitement of possibilities. Dreaming, after all, is a form of planning. – Gloria Steinem

The sun lights up the triangular rock fortress of Thielsen while I still lay in my quilt, cozy and lazy. Elgar’s ‘Nimrod’ fills my mind on this perfect morning. No one joined me on my hill except one hiker just making dinner before moving on.

I love my solitude, eventually making breakfast and packing up. I cross the stream below a mini-waterfall. Once below, I hear other campers including a barking dog.

The trail heads up and I test my legs, wondering if they’ll balk at such long days of many miles. Up is my strong suit, but I take care to go easy. I hope to get into Crater Lake National Park and walk the rim, but it is a long way from my start. 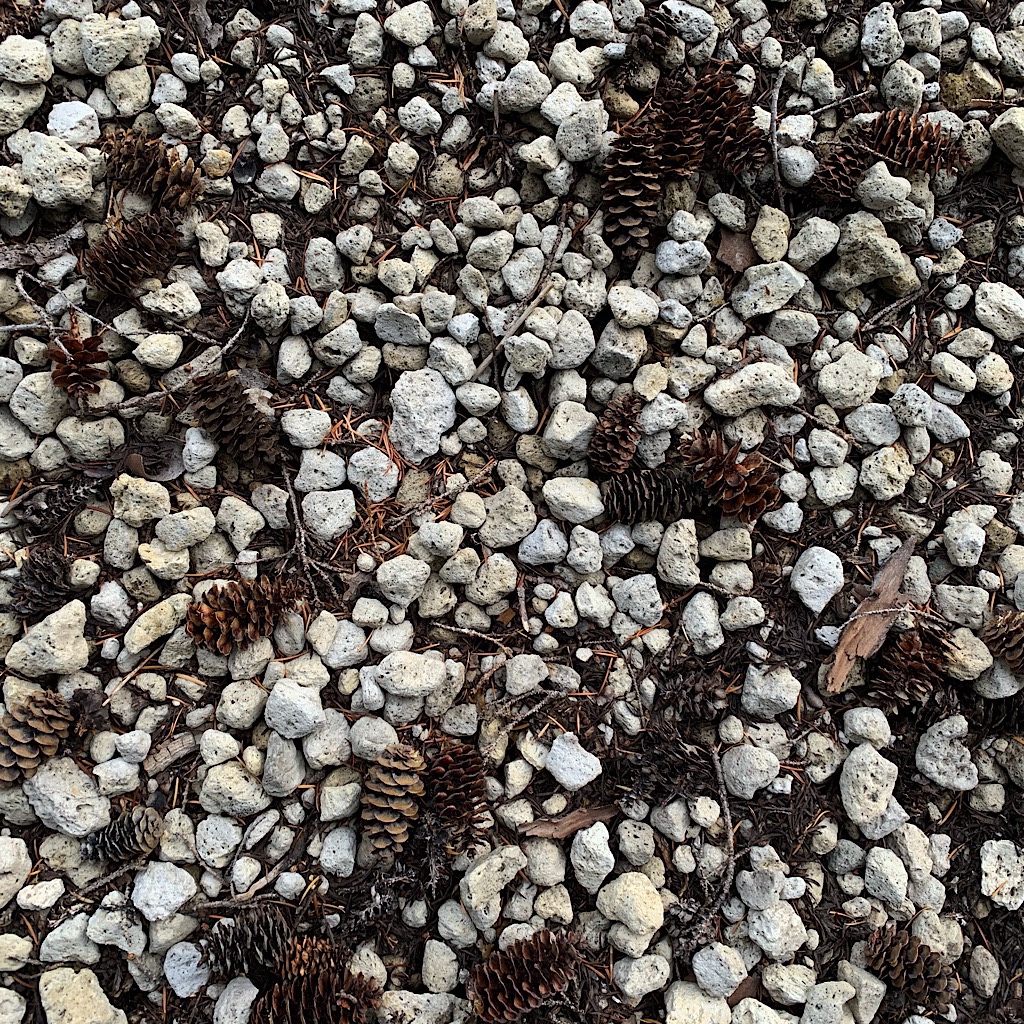 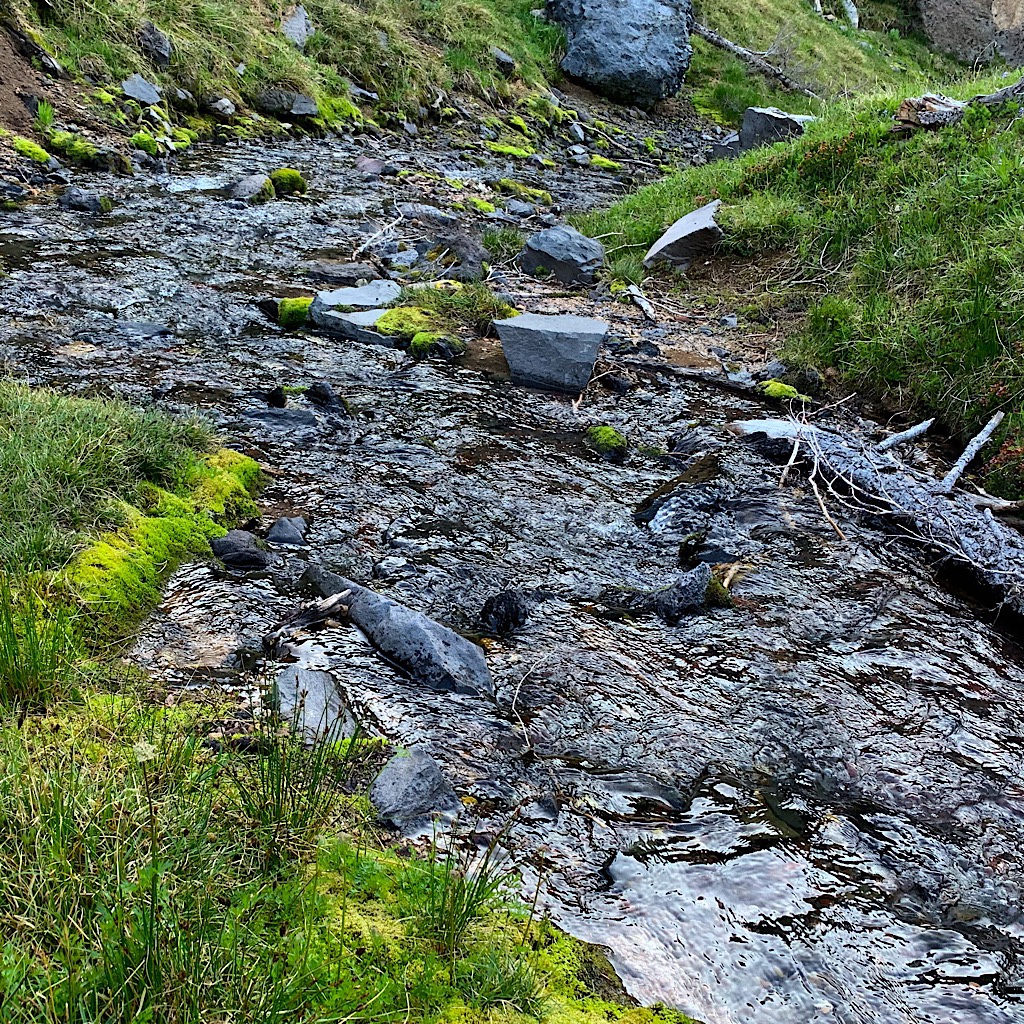 A man camps at the trail junction looking at the mountain and out to huge Diamond Lake. There are so many people on the trail. It’s a wonder I find private places to camp near water and with beauty all around.

I am out of sorts today, likely because my goal feels too big. There is no water – and no camping – on the rim. Partly the park service won’t allow hikers to set up but the other reason is mountain lion ‘activity’ has closed designated areas. So, I have to simply let the day unfold as it will and hope I get somewhere before it gets dark.

But right now I focus on heading down without smashing my legs too hard. I’m in that panicky space where every little muscle twinge sets me off, fearful I’m developing shin splints. 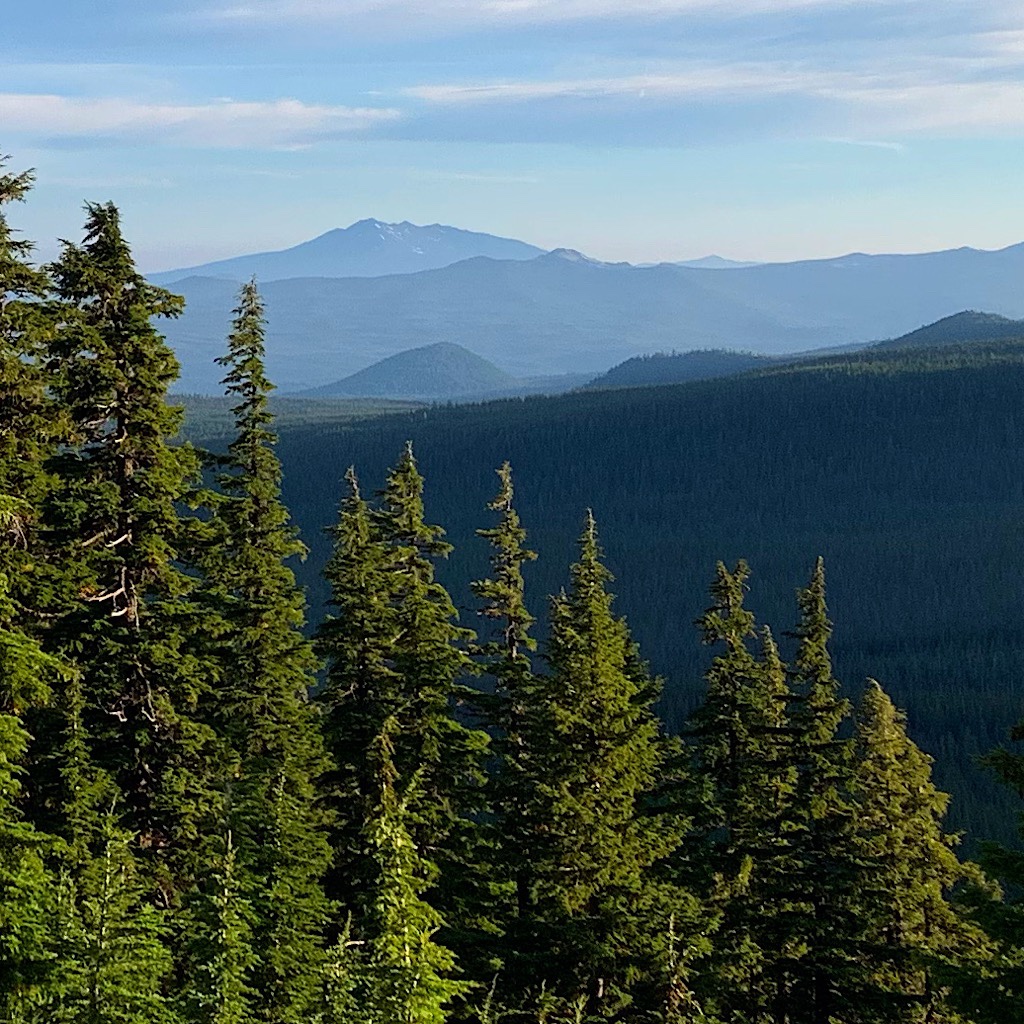 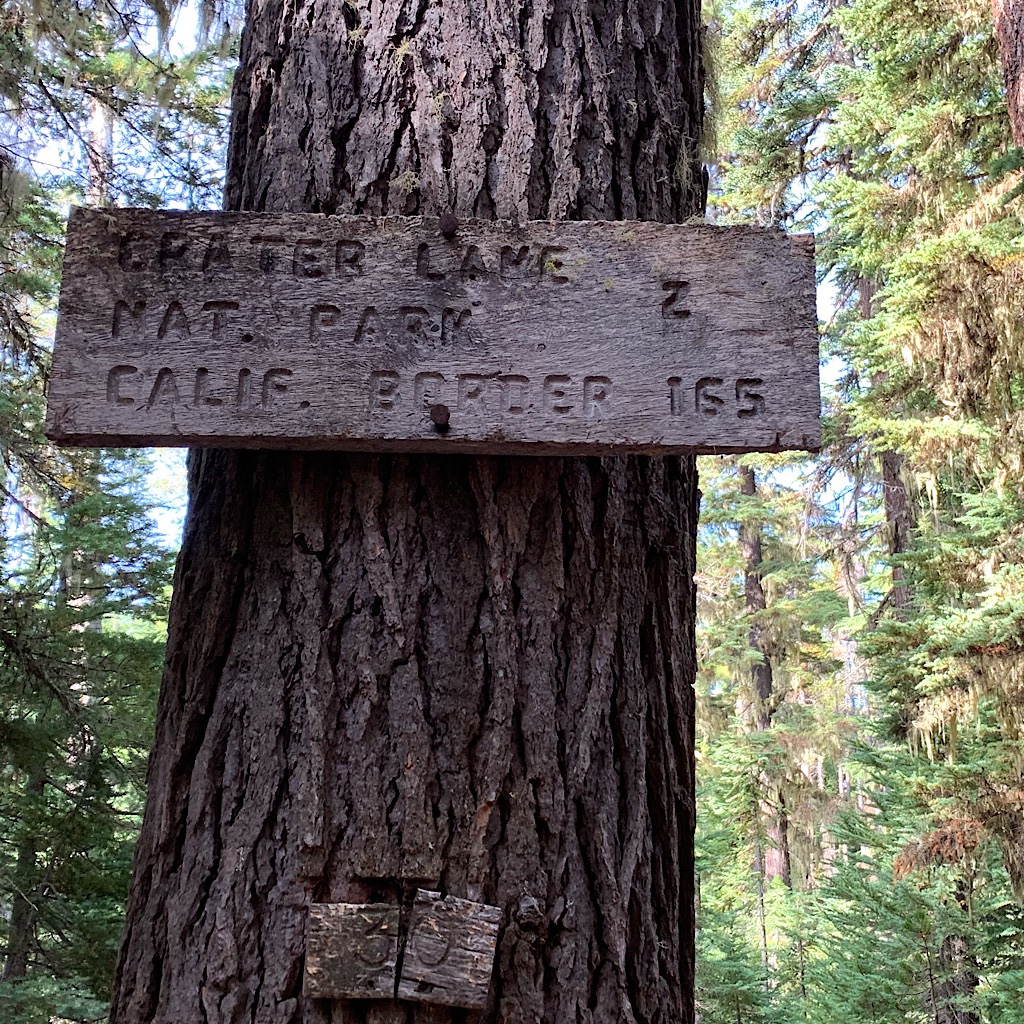 I try to sing. I try to think happy thoughts. But nothing seems to drive away the funk. People pass me, and some are friendly and smile, eliciting a smile back and helping me lighten up.

I tell myself to not go back down Analysis Avenue, where I replay conversations and begin arguing with the air. Unless you can find a way to make fun of all the awful things in your life, knock it off!

Being alone forces me to center myself, to get grounded, have a little discipline and be my best guide. It works pretty well as I come to a flatter spot and can hear the highway. First, it’s a dirt road with a huge cache of water. I fill up and take a break, ‘cameling up’ on a liter and eating a few snacks.

A guy called ‘Grumps’ comes by and I tell him I can see a smile there. He says it’s actually what his grandkids call him. Grumps says he’s not even thirsty, but it’s over nine miles to the next cache so he loads up too and sprints away. 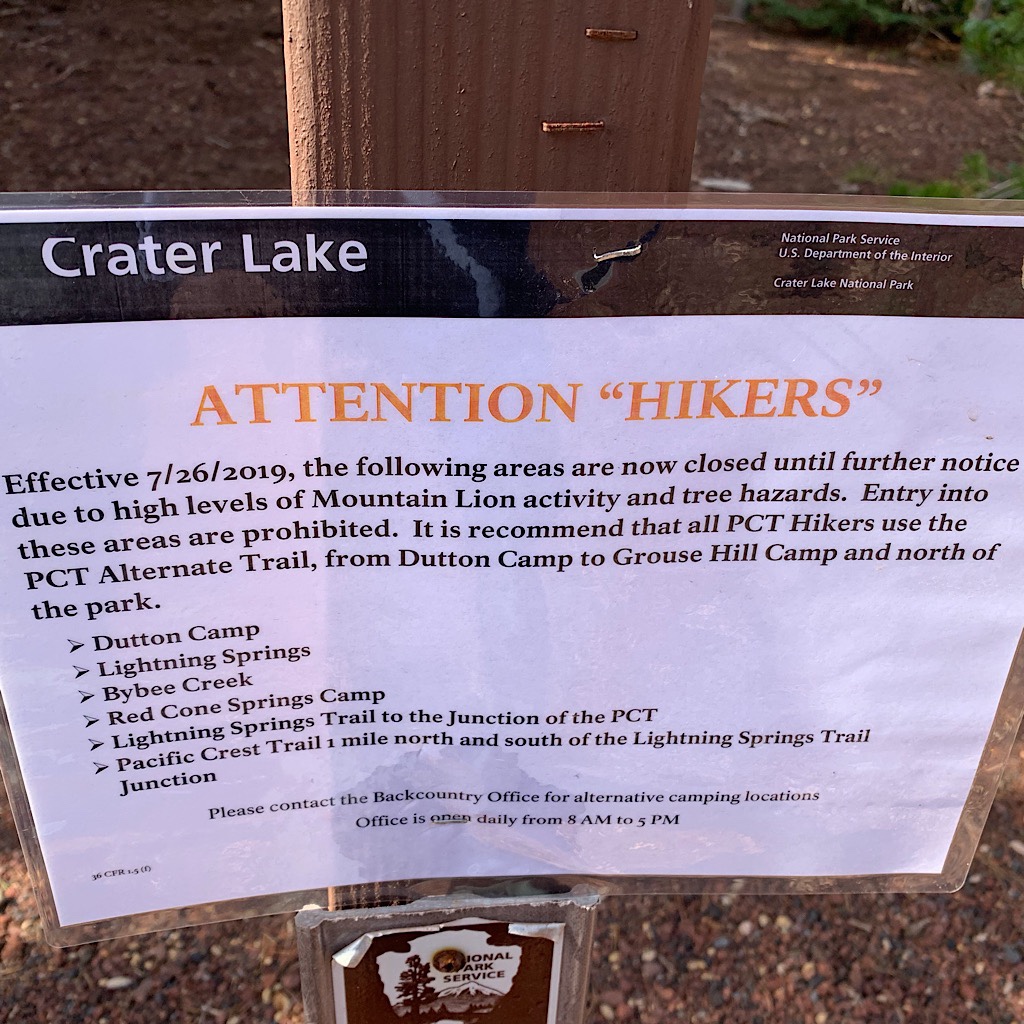 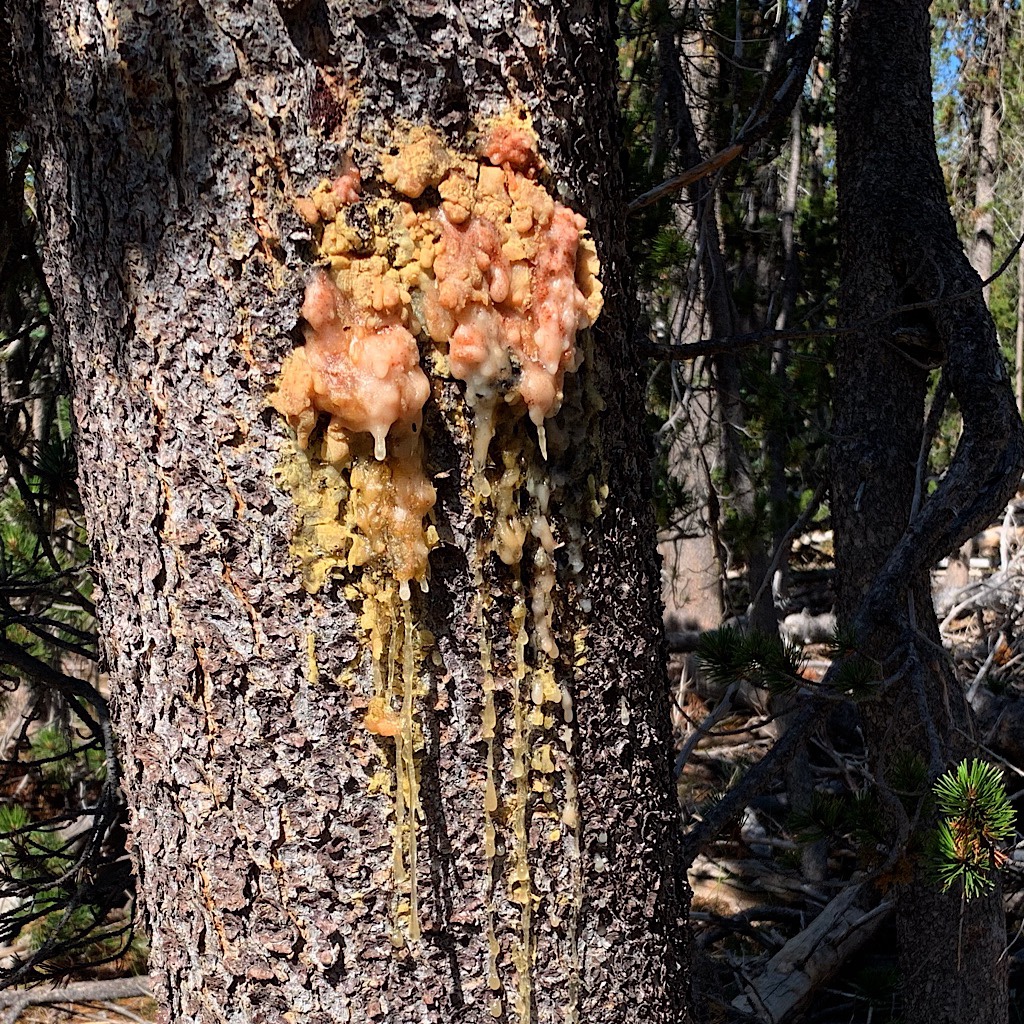 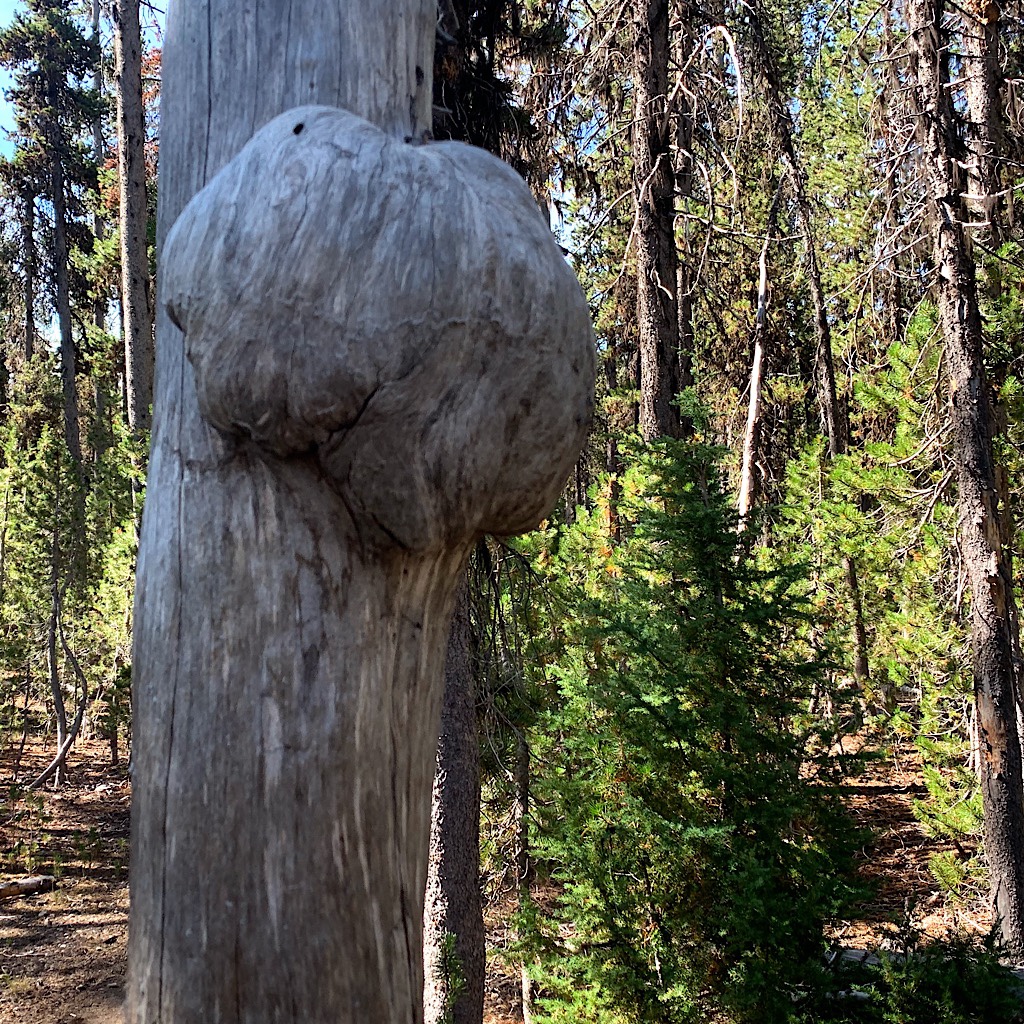 At the highway, a hiker tries to get a ride and asks if I might take the bugs with me. It’s dry out here, not a water source anywhere nearby and the trail is sandy, yet I’m being dive bombed, so in full bug burka mode.

The next long section is mostly flat. I get more stressed out, still unsure I can manage all these miles on my liter of water and tired legs. I decide to take a pause each hour, since it should take me three hours to walk. I barely make the first, needing to empty my bladder. I guess this is a good sign I’m drinking enough.

As I move into the next hour, I play a game with myself. I ask, “What if this is all there is?” It forces me to rather than tune out, tune in and notice. And in the noticing just might come a bit of joy. 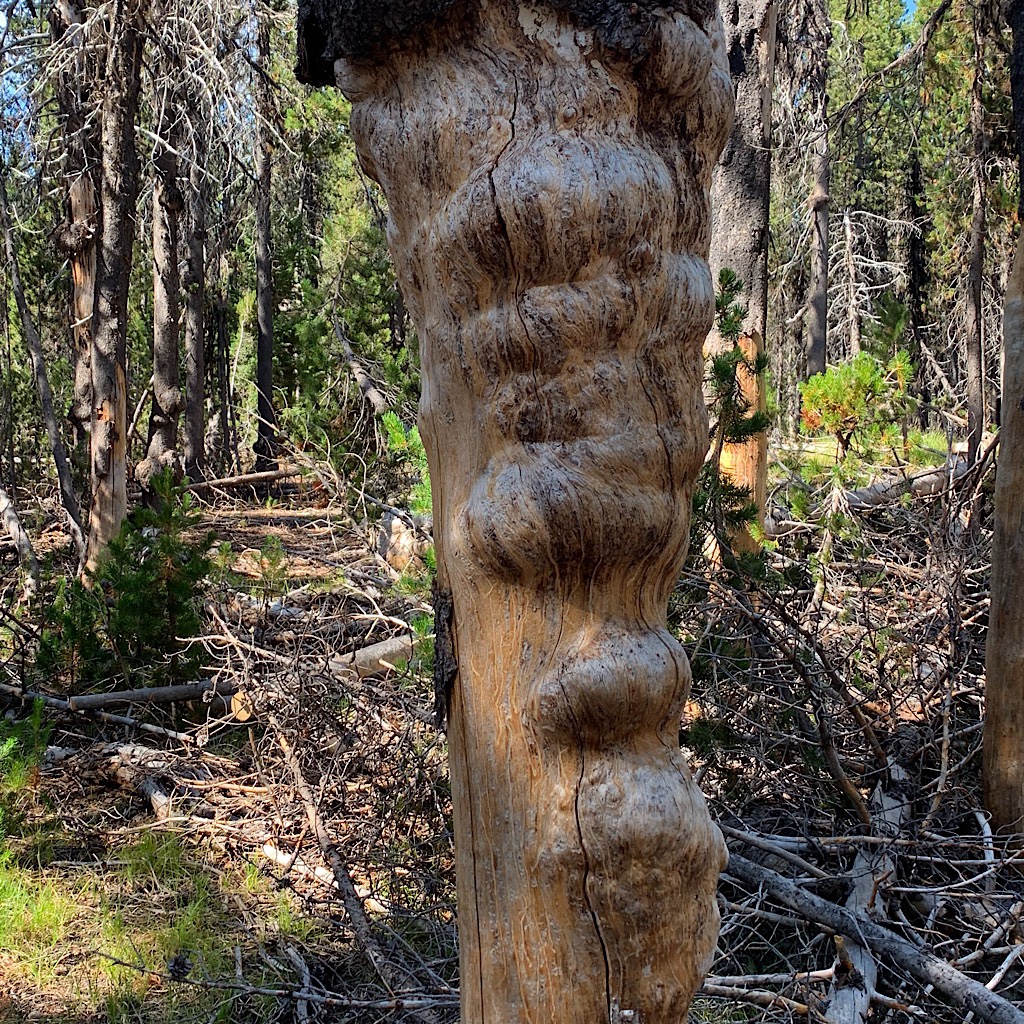 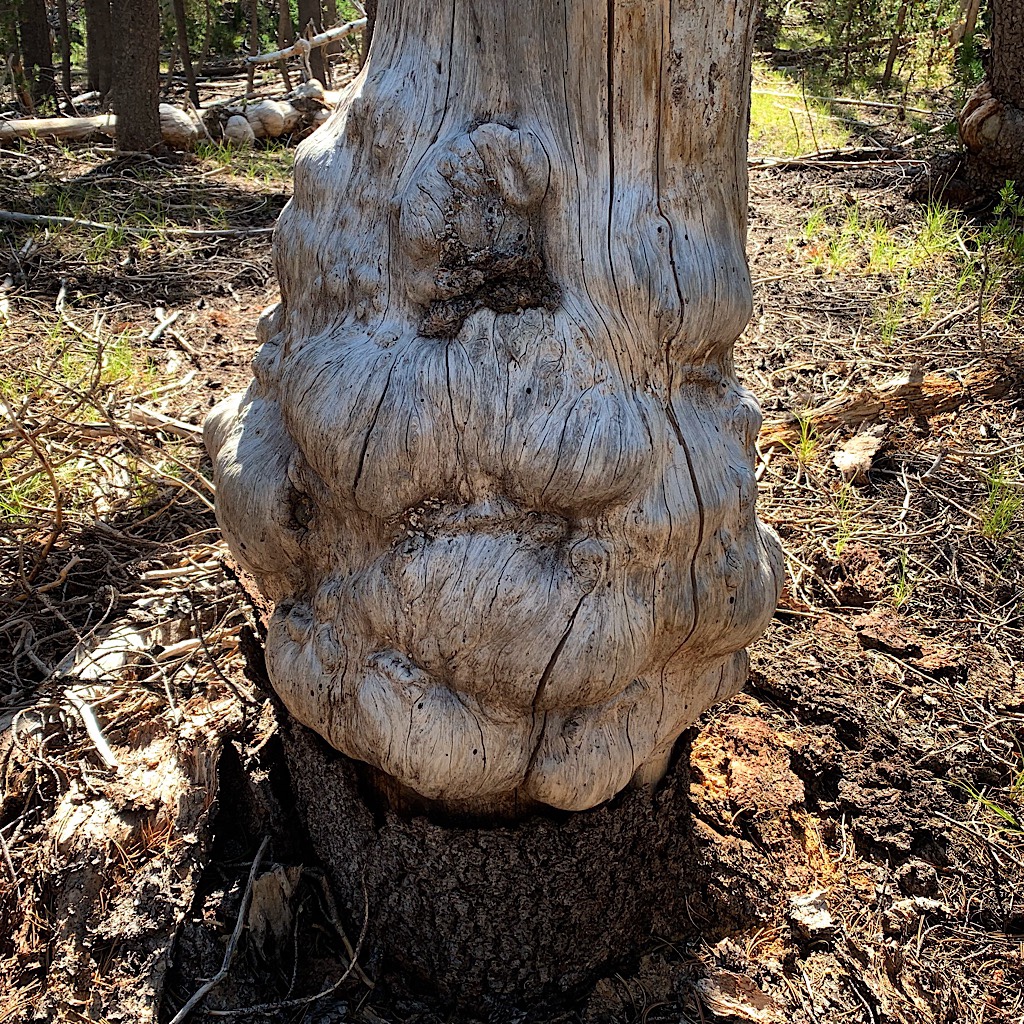 The first thing I notice is that the trees here have developed big bumps – are those called burls? They’re everywhere, on living trees, and huge dead sentinels stripped of bark, silver and smooth. Some stand atop each other like Chinese lanterns. Others sort of smoosh down as though a pile of sultan’s head gear. They bulge out obscenely, peeling off bark like a discarded sweater. I see breasts and noses, eyeballs, testicles and water balloons.

As I giggle at my bulbous forest, mosquitos ride my burka for miles, high on my carbon dioxide. Don’t they have somewhere to be? This head net was one of the best purchases of the trip.

Soon, the trail heads up and I can hear the highway. I follow it, frustratingly, for a few miles before finally turning towards it. There is a small parking lot with a bear locker filled with water jugs. Sadly, some jerk packed his dog poopie bag in there too, but plenty of water remains and I get help filling up from a German trio of hikers.

They tell me it’s a steep uphill for three miles to my first view, so I fill up and head towards the Rim Trail, an alternate to the PCT, but one that will give me spectacular views of Crater Lake. 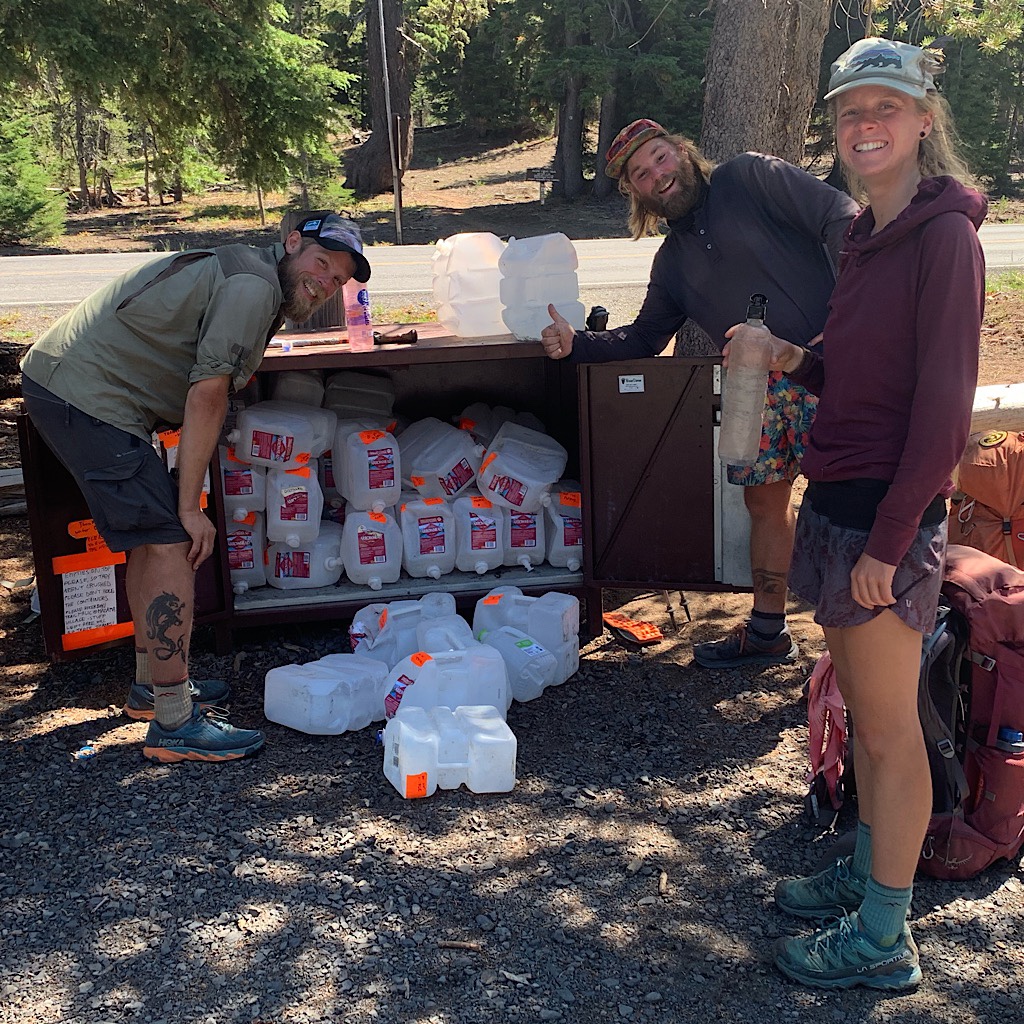 It’s steep heading up, and dry too. But the views back to the blue mountains and huge grassy meadows dotted by firs open up behind me. Oregon has a very particular look that includes lots of pyramid-shaped peaks and wide open space.

I can see people ahead of me standing at the edge, looking out. When I get my chance, I am astounded by the color of the water – a deep cerulean. I know there is a reason for this, something to do with the water coming from artesian springs, deep inside, but there is no explanation here, so I simply find a beautiful tree and sit in its shade to drink another liter and admire this fantastic natural phenomenon.

It’s the perfect day to walk the rim, which is not flat, but takes me steeply up and down some of the time, and even behind cliffs out of the view. The sky is also a deep blue and the temperature just right, the wind keeping all bugs back down in the valley.

I finally do come to a sign which explains the name. In a Monty Python-esque fashion, the lake was ‘discovered’ by prospectors who named it a very original, ‘blue lake.’ Then everyone forgot about it until a couple more prospectors a decade later stumbled upon the lake and also named it ‘blue lake.’ Apparently, this happened a third time, causing me to wonder how someone could ‘stumble’ upon this monstrous lake without any trees or brush obscuring it. 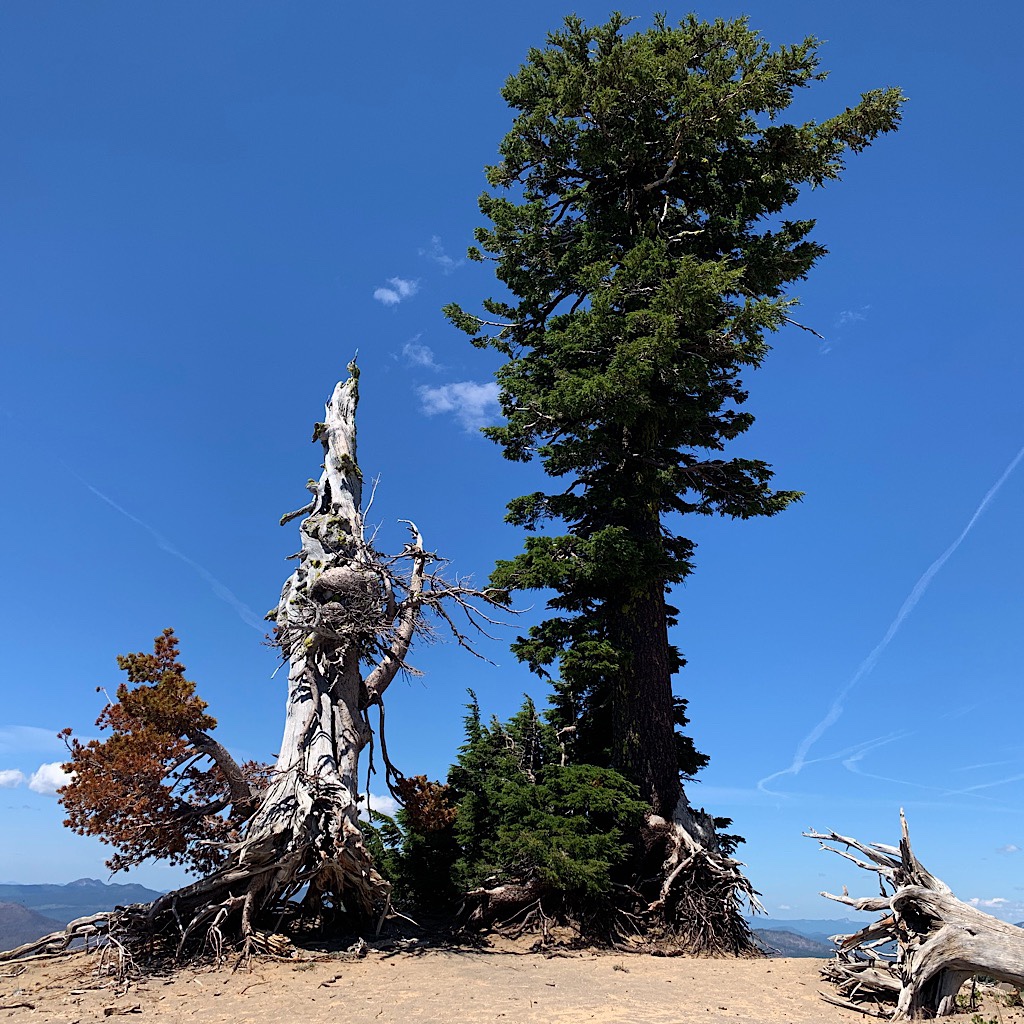 It took four stumbles for it to finally be named Crater Lake, and this after the stumblers sent a man in a boat over the edge – no mean feat, it’s a long way down. Signs posted now warn not to enter the caldera, so calling it crater lake certainly comes close to its origination.

For me, it’s simply glorious to circle, Wizard Island and all his mini islands changing perspective as I circle, a small amount of snow still clinging to the edge of the cliff far below.

Tourists are everywhere, heading to the highest point at the Watchman, which I skip because my views are pretty superlative and I still have a long way to go. I get closer now to Lightning Spring and the trail is crowded with overgrowth. This spot is closed to campers due to mountain lions, so I start practicing my high notes should one cross my path and take an interest. ‘Queen of the Night’ would make any feline’s ears flatten – I remember Sasha letting out a crackly protest whenever I pulled my flute out of the case. I think I’m safe.

The views get better and better and I know camping out here with a full moon would really be something, but I have no water and it’s against the rules, so I say goodbye to a marvelous afternoon and head into the woods. 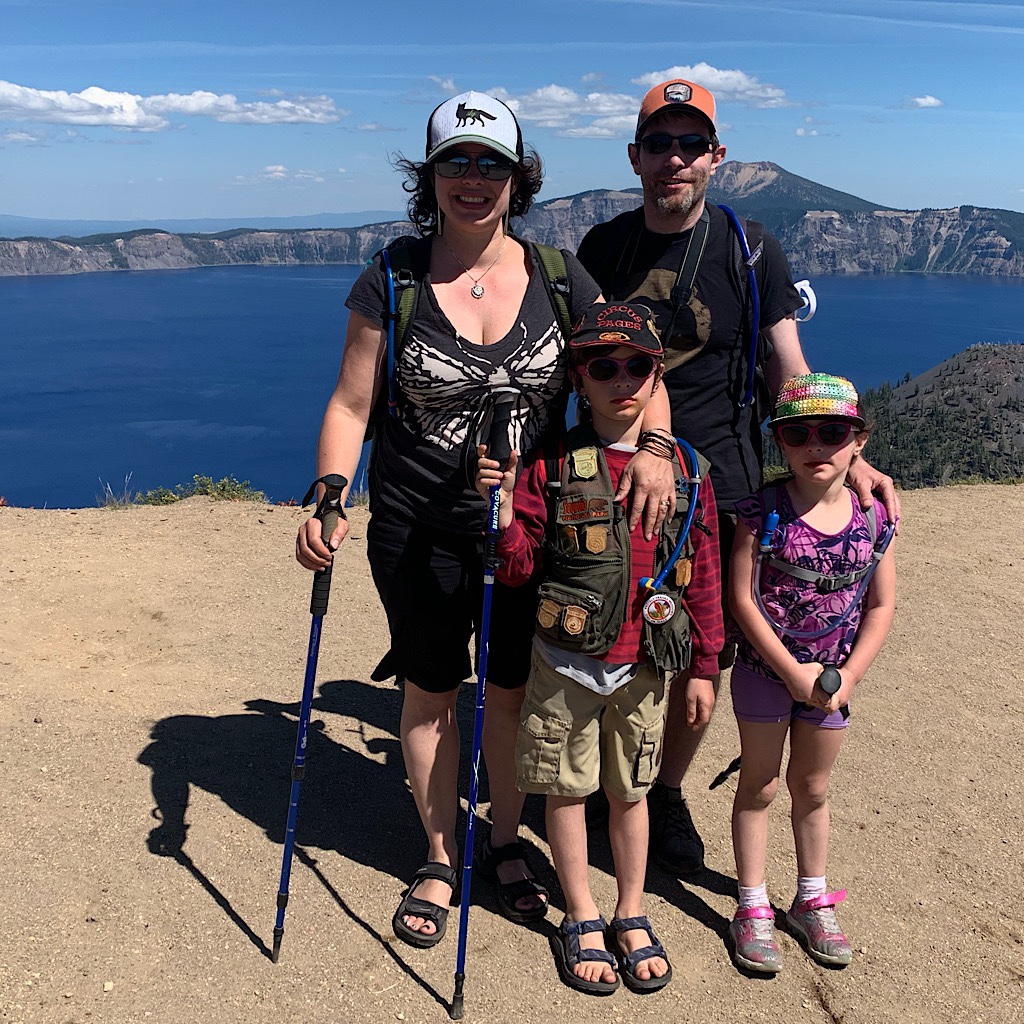 It’s very steep at first heading down to Dalton Creek. My plan is to walk to Mazama Village. Richard sent me a new pair of shoes and other items, plus a resupply, but the Germans told me it’s a 50/50 chance the package will show up.

I decide not to worry and continue on this tiny joiner towards the PCT. I come to a few gorgeous streams and realize I could camp out tonight rather than sleep in a noisy campground. I look around a bit but find nothing until I meet the larger Crystal Creek. Two hikers tell me this is the last water for 23 miles! Of course, tomorrow morning, I’ll take a one mile detour to Mazama, hopefully get my new shoes, camel up on water and then continue south toward California.

But right now, I’m cleaned up and fed and cuddled in for my third night in a row of solitude. Feels just wonderful. Sweet dreams. 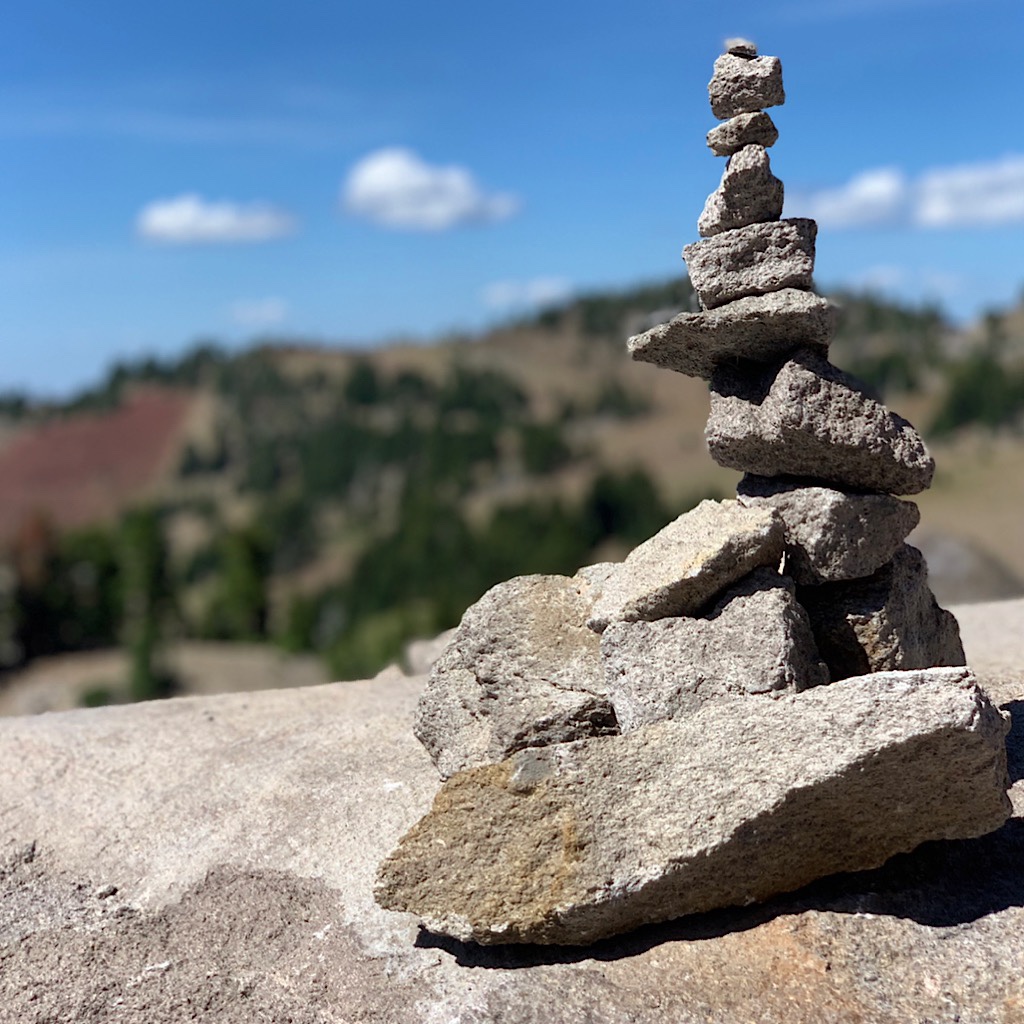