What is in other people’s minds is not in my mind. I just do my own thing, – Audrey Hepburn 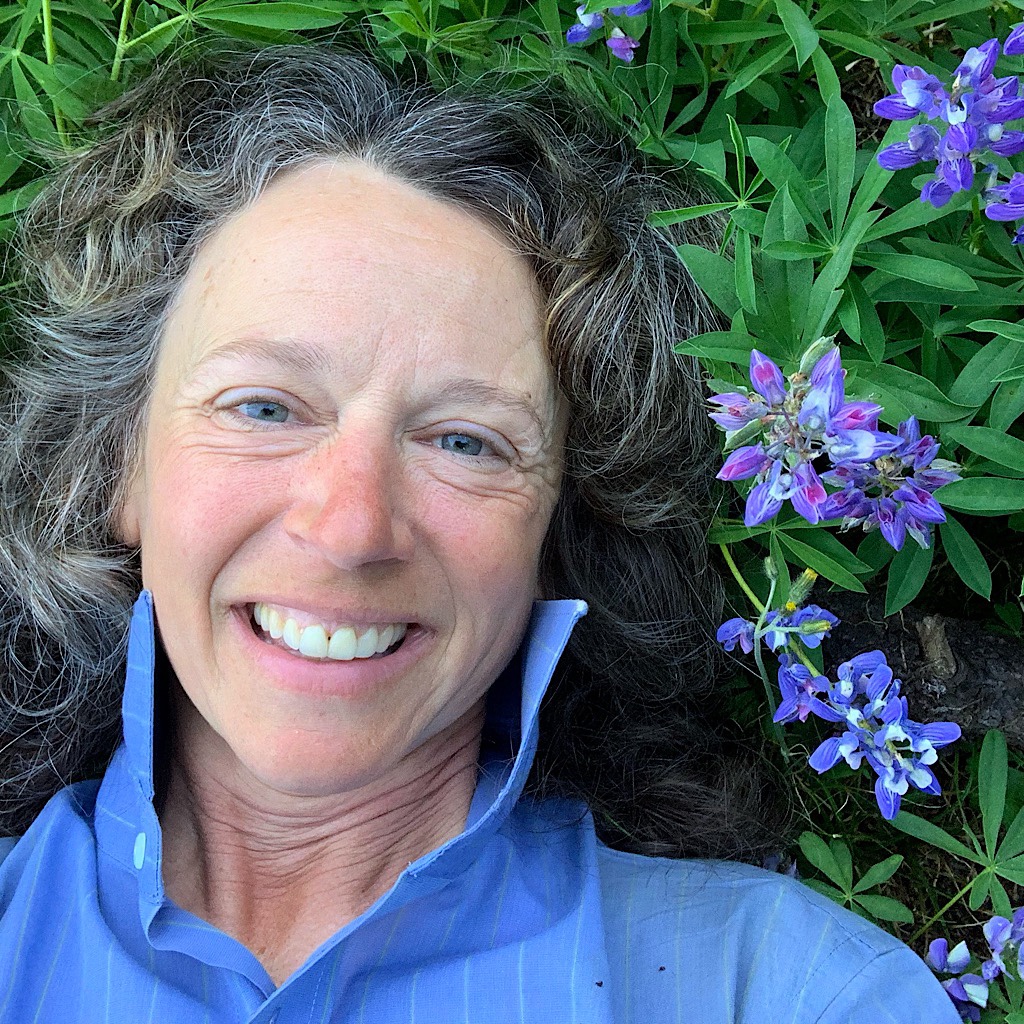 I am awakened early by Bobby O faffing about in his tent, headlamp on red. The sky is lightening anyway, so might as well pop the air mattress and get on with it. I heat up chococoffee and ‘the kids’ – as Bobby calls them – are already talking loudly as they set off.

Middle Sister looked right into my tent all night. She is so lovely snow filling in her huge multi-colored scars as though poorly applied concealer. The sky was crystal and millions of stars glittered reminding me of my obsidian fields yesterday.

The trail heads down through meadows filled with lupine. The walking is easy and I sing all the way to a gorgeous stream running directly through yet another meadow. It curves and bends over on itself gracefully. I hear everyone before I arrive. They plan out their day ahead, where they’ll go, where they’ll need water. I slot in and purify a liter through my Sawyer squeeze and drink it all at once. 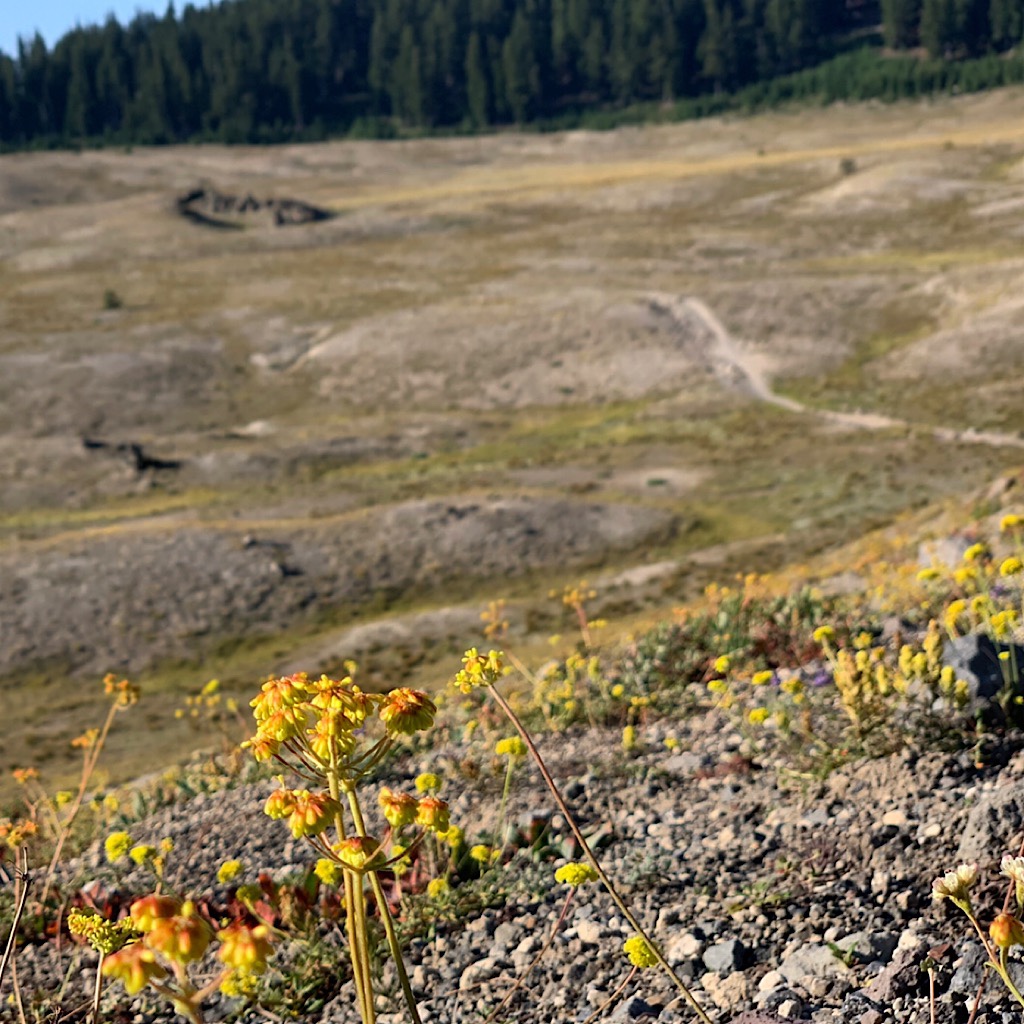 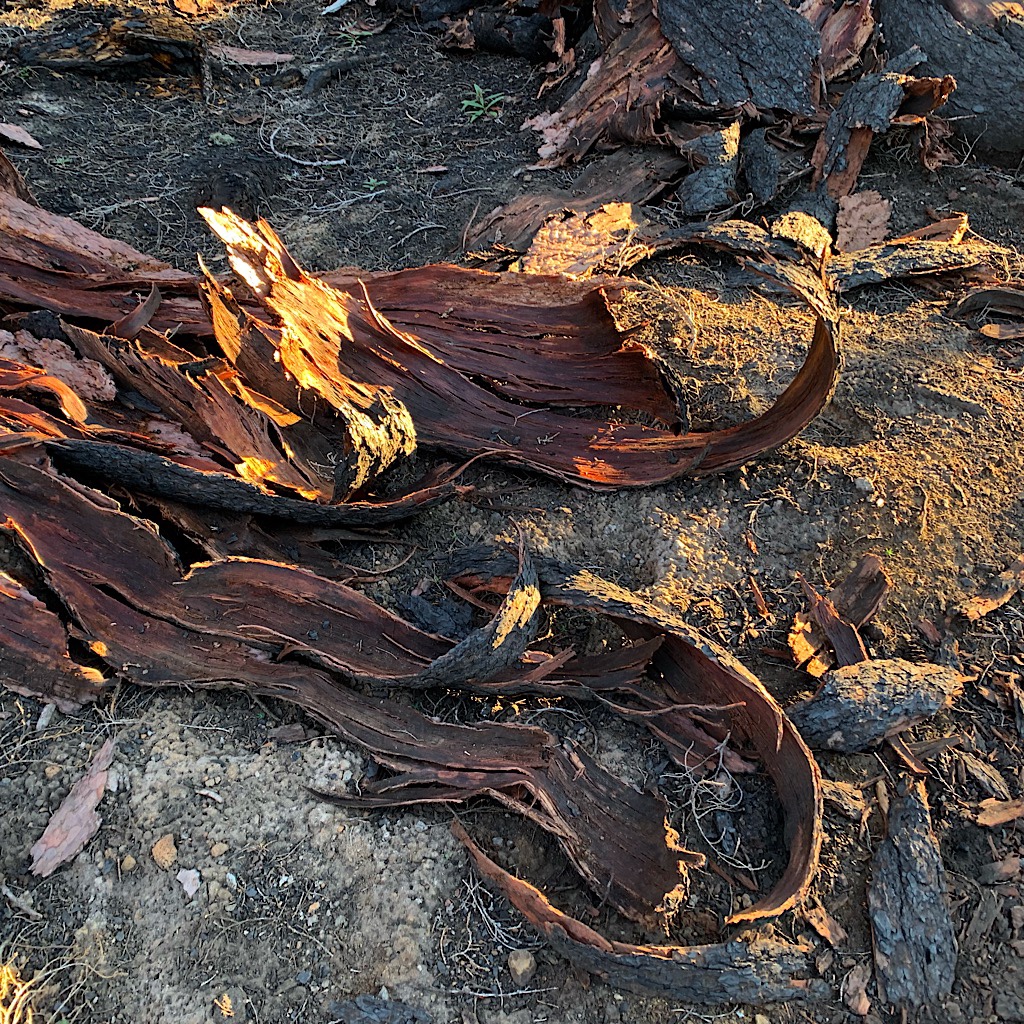 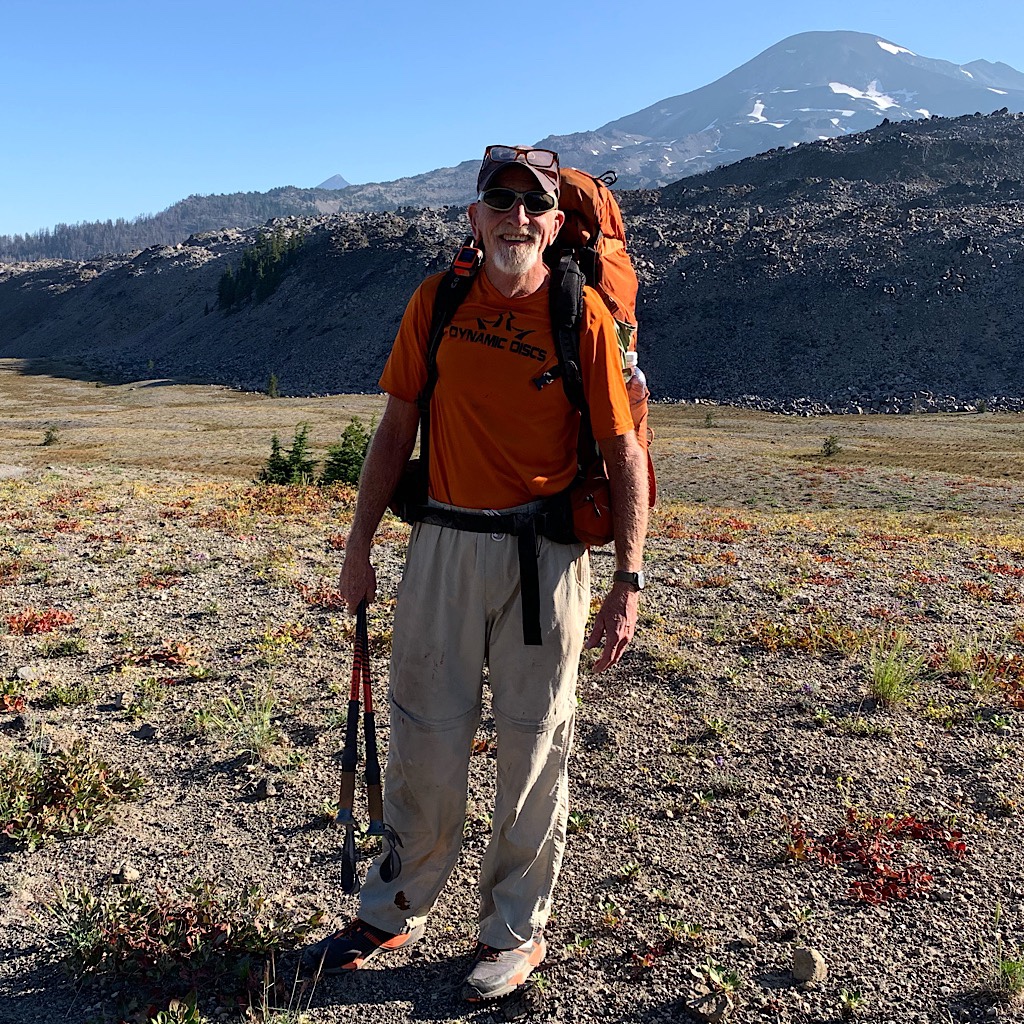 Bobby says he thought FM radio was on before realizing I’m a morning hummer. He teases me he’ll camp far away from now on. I laugh and comment, but I feel sort of outside this group, they mostly talk to each other. Then, they go.

I’m not sure exactly why, but it leaves me absolutely emptied out. I feel so lonely and sad. I appreciate the reminder that the next water is far from here – though I discover there’s a pond in four miles, so no need to carry yet – but no one asks what my plan is for today or if I want to come with them. I realize I’m older and a loner, but I suddenly can’t stop sobbing.

I walk through the meadow and a man comes out of his campsite. “Are you OK? Do you have enough water and food?” (just please stop crying!) I tell him I do, that this is just emotional and thank him for checking on me.

But I just keep crying. No one wants to walk with me. No one likes me. I feel so lonesome. I come to a huge open space with tiny flowers clinging to barren earth, the trail a slightly lighter shade of brown running up and over the horizon. A man walks past all in orange and I notice his shirt says ‘Dynamic Discs.’ A disc golfer! We chat briefly and I tell him about Richard’s maps. He says he’ll go home soon to “pet his wife and make love to the dog,” at which point I say goodbye.

But at the top of the hill, a young woman asks my advice about where to camp before Obsidian Falls – which she pronounces ohb-sih-DYE-in. I suggest a camp spot and a pronouncer and we both laugh. I’m starting to feel a bit better. 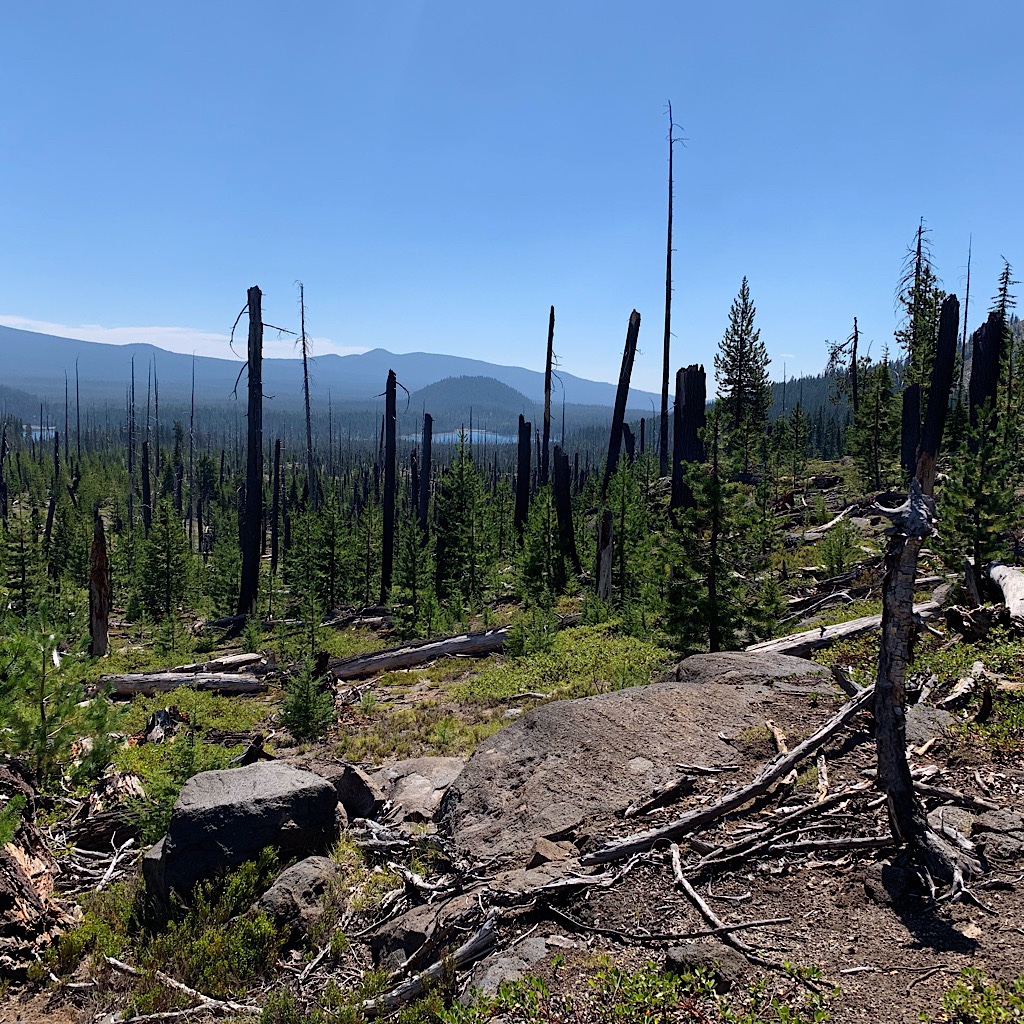 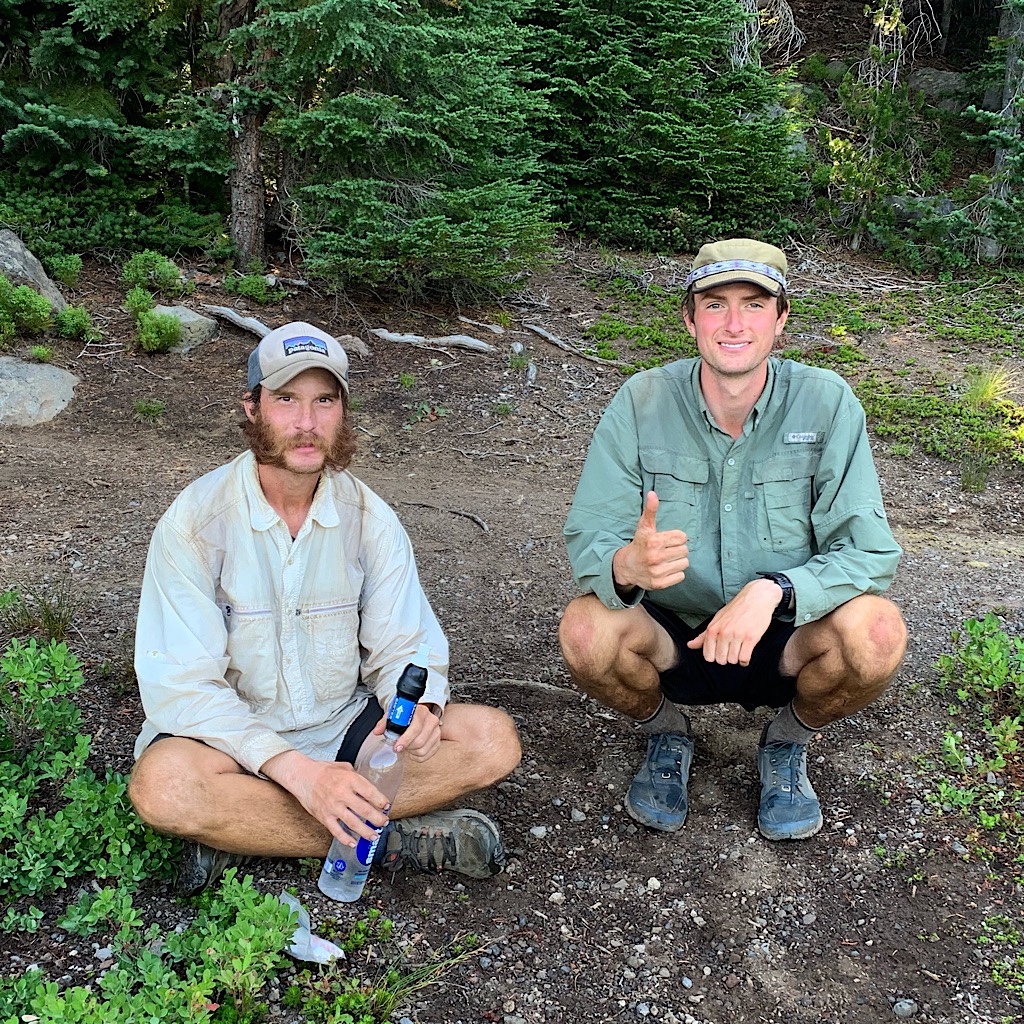 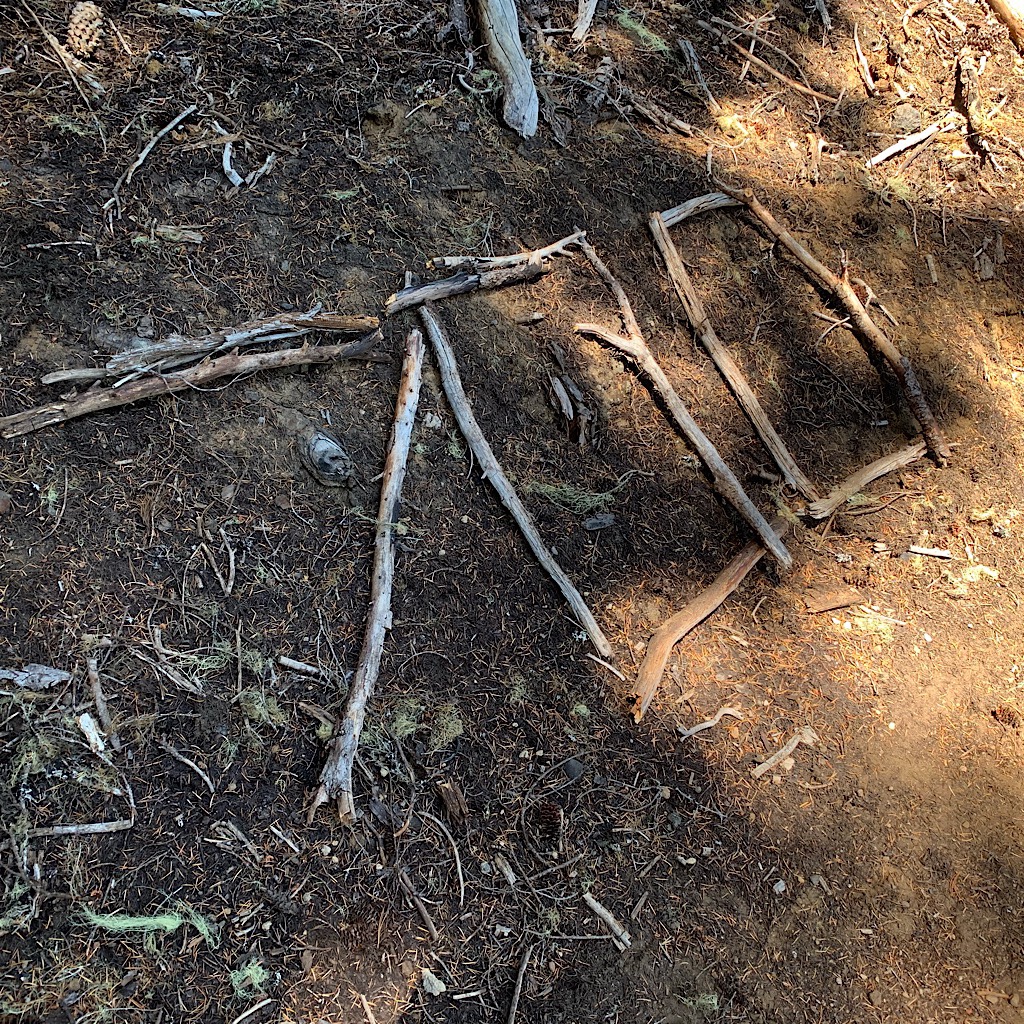 At four miles is the promised pond and I am passed by a young man who also fills up, suggesting a liter and a half for the upcoming nine miles (or twelve if the stream is dry.) I say these are easy miles now and he protests saying all but the next big hill. Oh, that!

His friend shows up then and they tell me they started on July 11 from Canada, ten days after me. I ask if they’re trying to break a record, and they say they’re just trying to avoid mosquitos. I’m not sure fast will help but if it makes them feel better.

They both have trail names and I almost start crying thinking I’ll never get one because I have no friends. “It’ll come,” they say. I suddenly realize that being alone isn’t all that bad. I’m totally in my own space, I plan my own timing and breaks and camp spots, and I live with whatever mess I want to make. Maybe the four ‘kids’ need each other more than I need anyone. I am making this thing work and it feels pretty good.

Before I head up the big hill, the two ask if it’s my first long hike. I tell them I finished the Te Araroa on March 4th. “This year?!” I nod and fly right up that hill. At the top it’s ‘the kids’ lolling around on their phones and eating a second breakfast. They tease me about being a day hiker, one asking if I’m ‘helping.’ We have a good laugh and look at the view of one more mountain, that Bounce assures me is more of a hill even if there’s still snow on it. 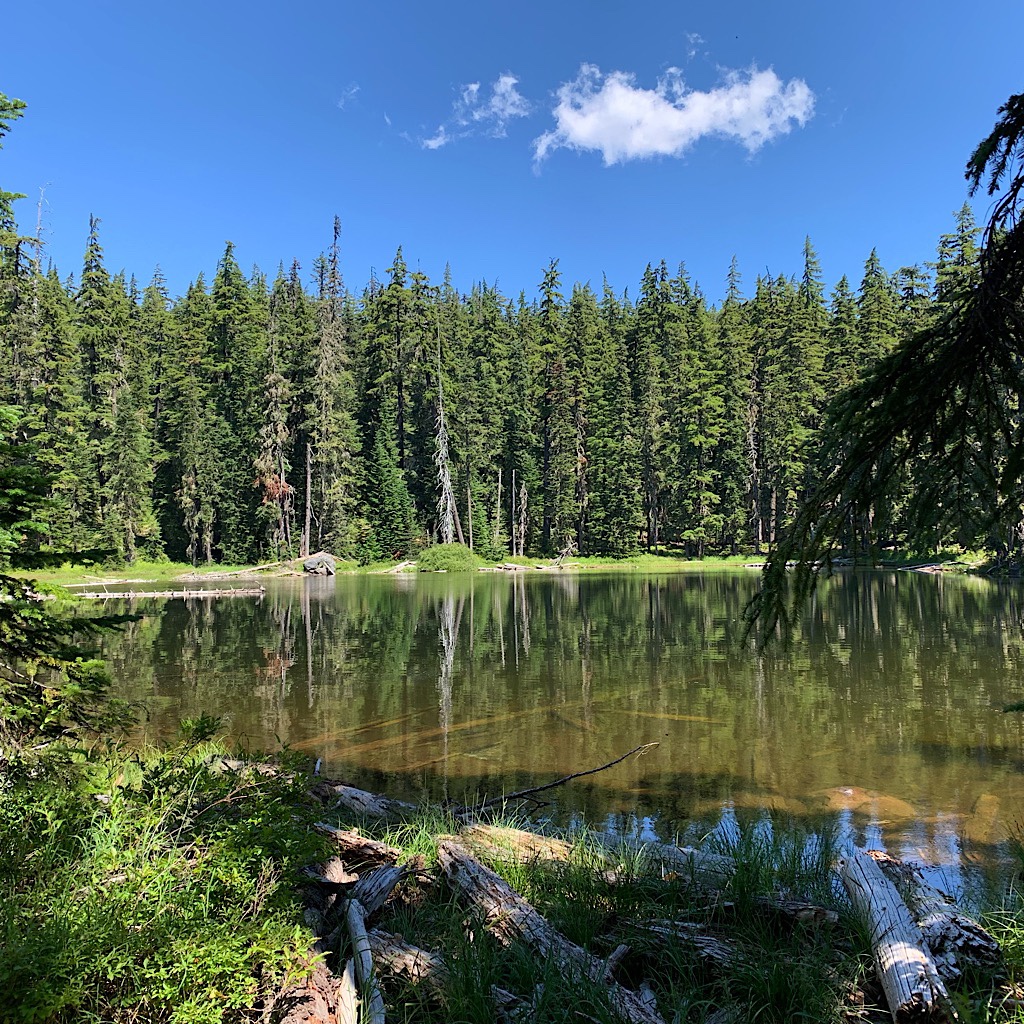 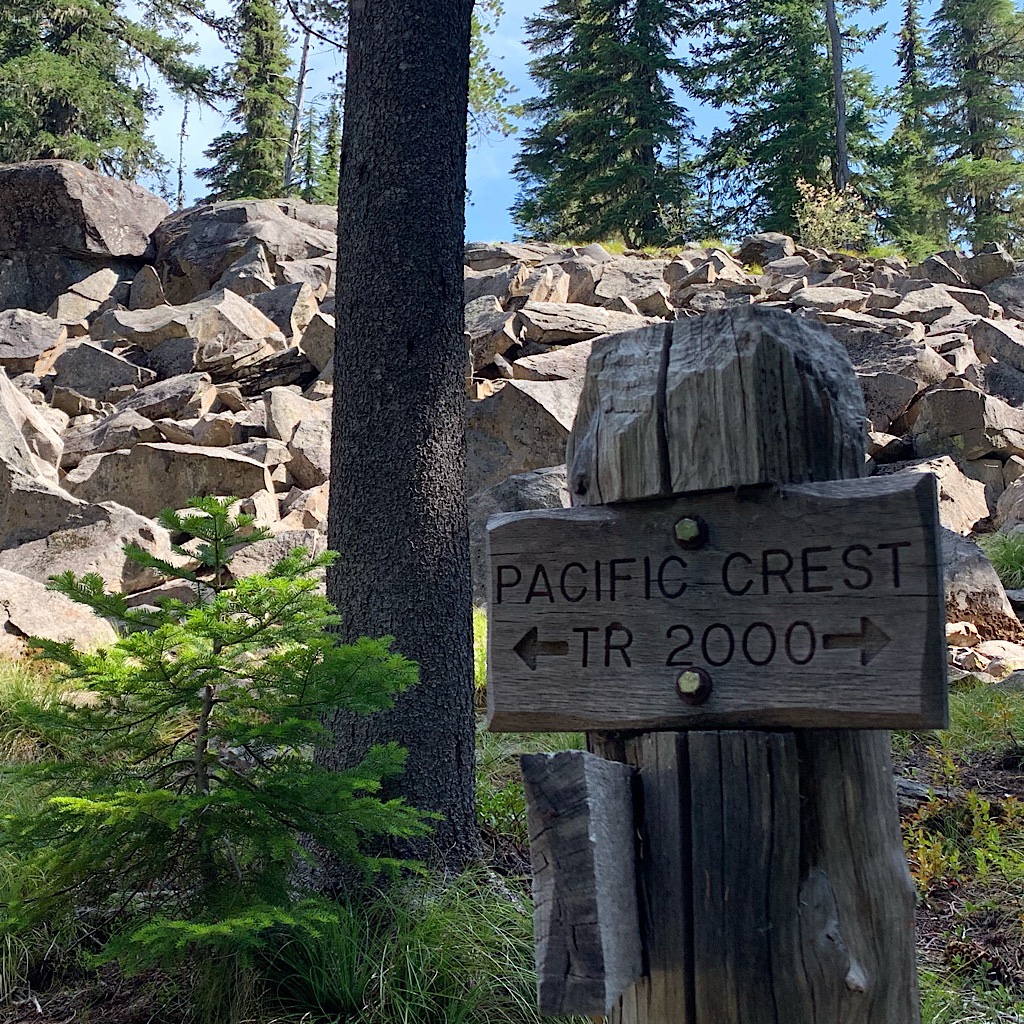 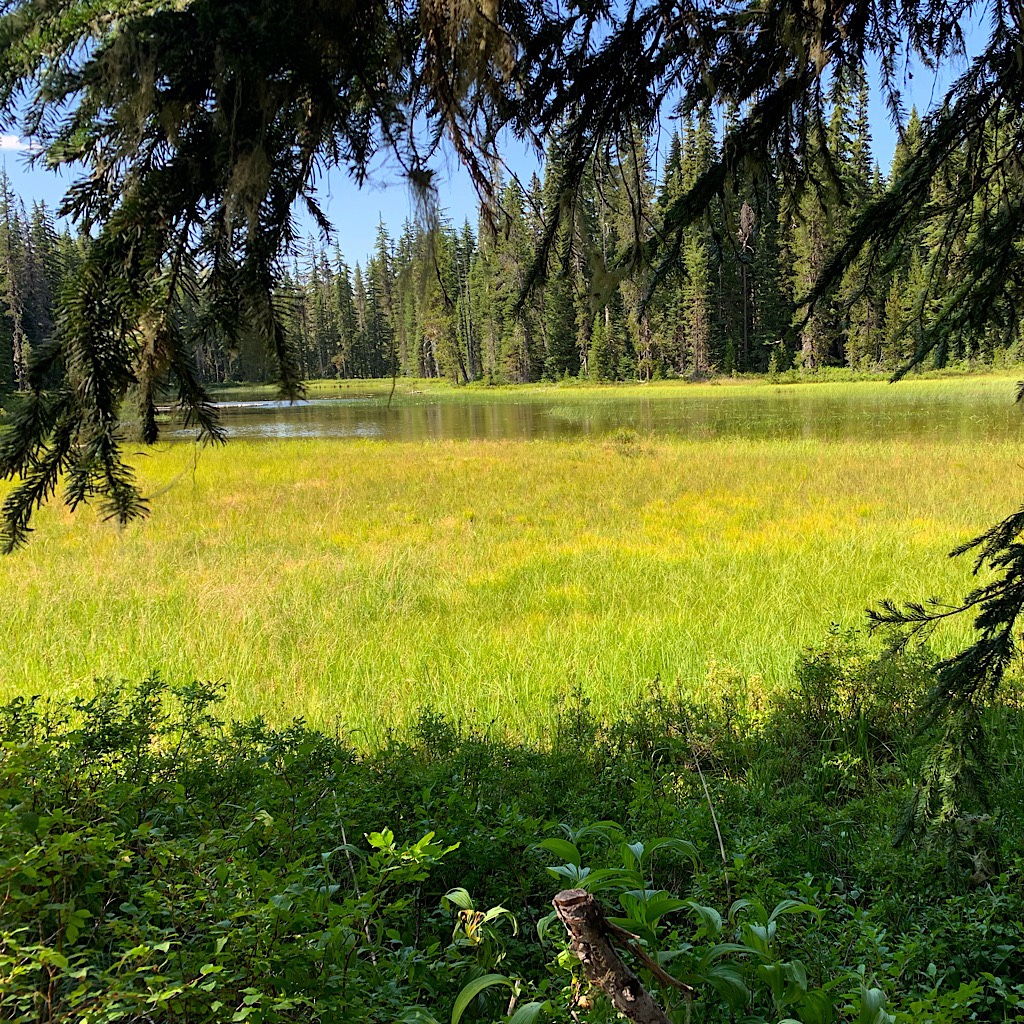 The fast men arrive and I can tell quite impressed I’m already at the top. I say I’m not sure if I’m more fit or if Oregon really is flatter. They say the trail does kind of walk itself and we trade stories of hiking the Appalachian Trail in New Hampshire – rocky, steep, difficult and dangerous.

It’s hello and goodbye with those two as I will likely never see them again, but they pull me out of my funk and I sing the entire way down the other side. Debussy’s ‘Nuages’ runs through my head as does Samuel Barber’s setting of James Agee’s ‘Sure on this Shining Night.’ I feel better thinking ‘kindness must watch for me this side the ground.’

Now, Oregon really does become flat, or at least flat-ish. There’s a little up and down, but the trail is very easy winding through forest and meadow, where butterflies, crickets and a few dragonflies dance around me. It is strange here, though. A ‘green tunnel’ but open to the blue sky, dry and hot, breezy and smelling piney and delicious. A brown weasel leaps into the trail and bounds ahead of me before exiting into the brush. 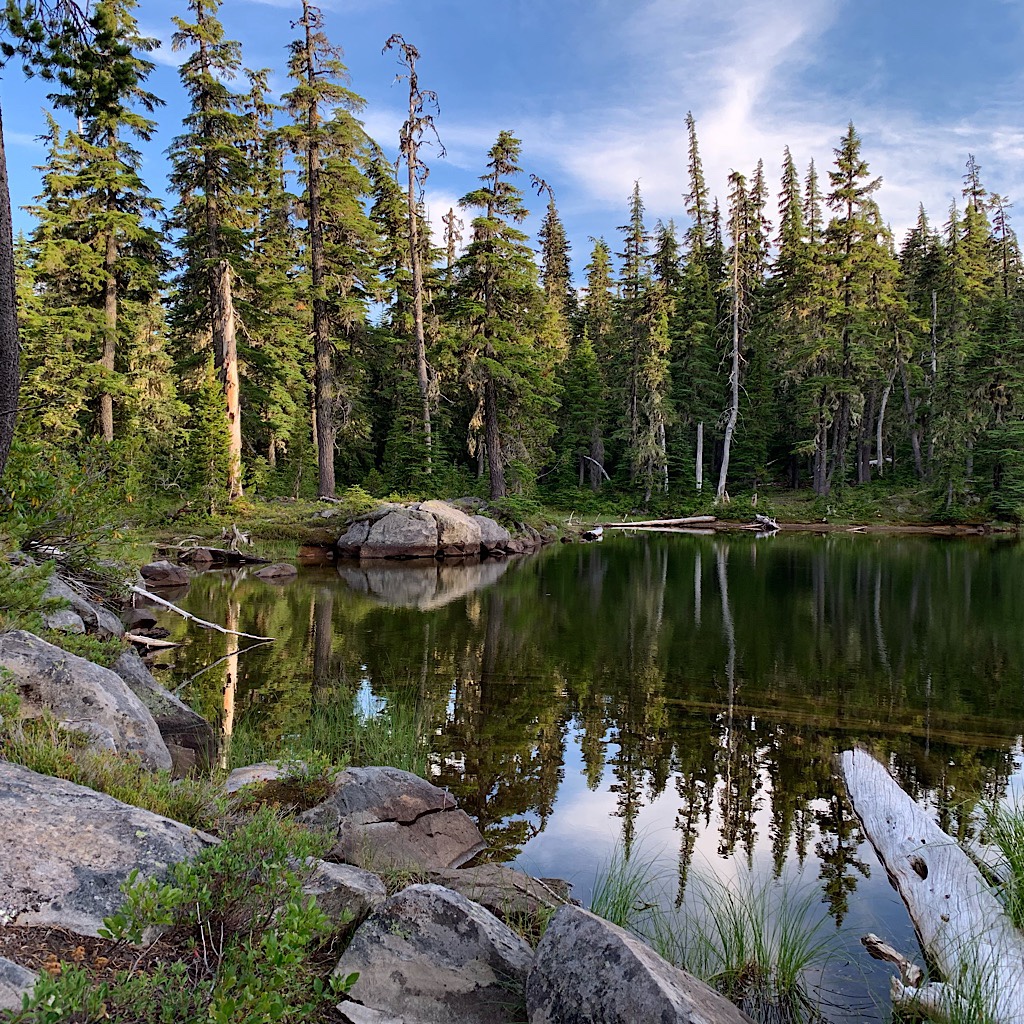 I finally reach a series of stunningly beautiful lakes, emerald green with tasty water. I stop to make lunch before heading on and meeting one crabby hiker after another. They barely say a word, but if they do it’s a tight lipped, “Hullo.” It’s one in ten who appears happy – the two cute gals who gushed over my hat, the young man and his trailing-behind wife both dressed in full-length mosquito netting trousers, the long haired dude asking how I am and telling me he’s ‘walking the good walk,’ the older gentlemen laughing at my bug burka and even more when I tell him I donated blood to support the environment, the Englishman who smiled, looked me in the eye and asked how my day was going – and actually seemed to want to know.

The rest are downright rude. “What gives?” I ask a young man who asks if I’ve seen a women in pink – a notably snooty crank. “You’re in nature, walking, you don’t have to work, there’s not even traffic!” He tells me it’s PMS. Right, but what about the guys? He admits the mosquitos have made everyone crabby.

Mosquitos?! Is this a repeat of yesterday’s lava rocks over-reaction? Get a head net. Use deet. For the love of the goddess, don’t come here in shorts and a T-shirt and complain about getting eaten alive. I just don’t get it. 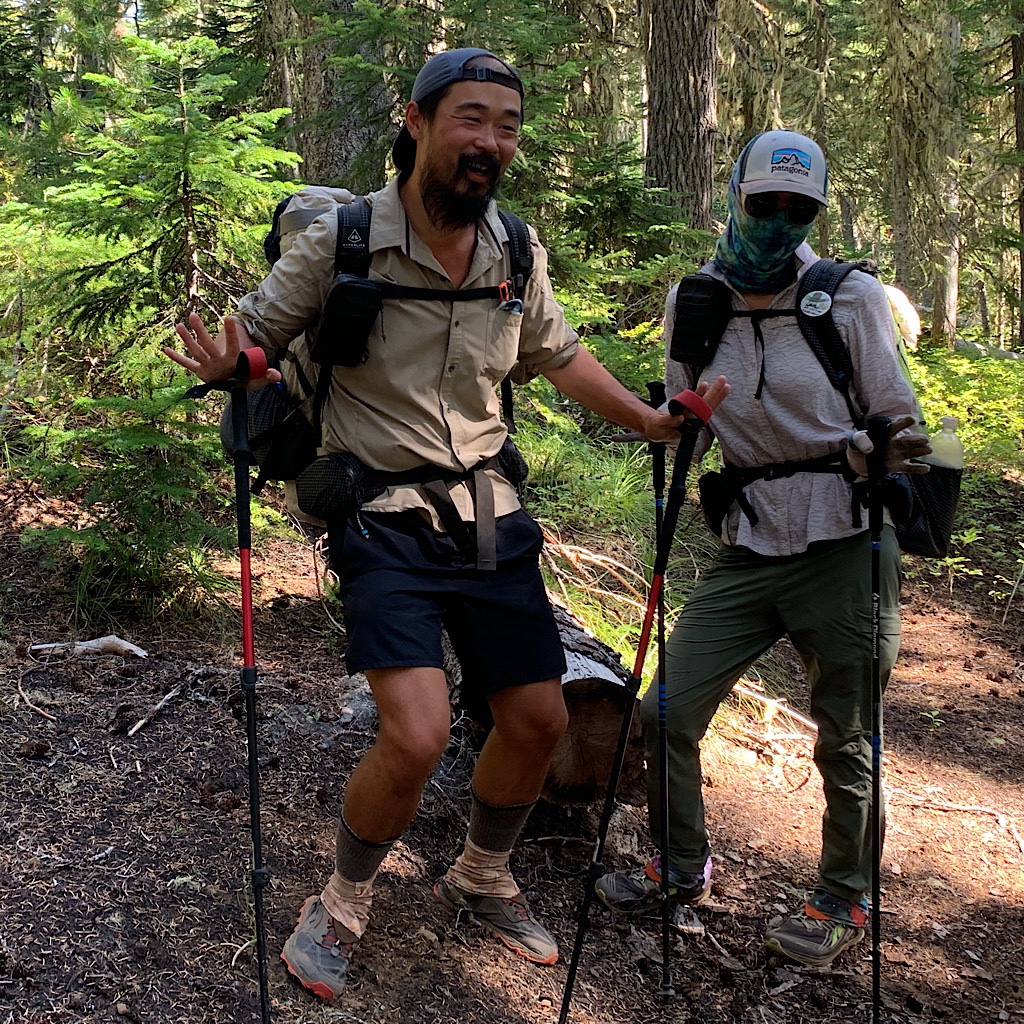 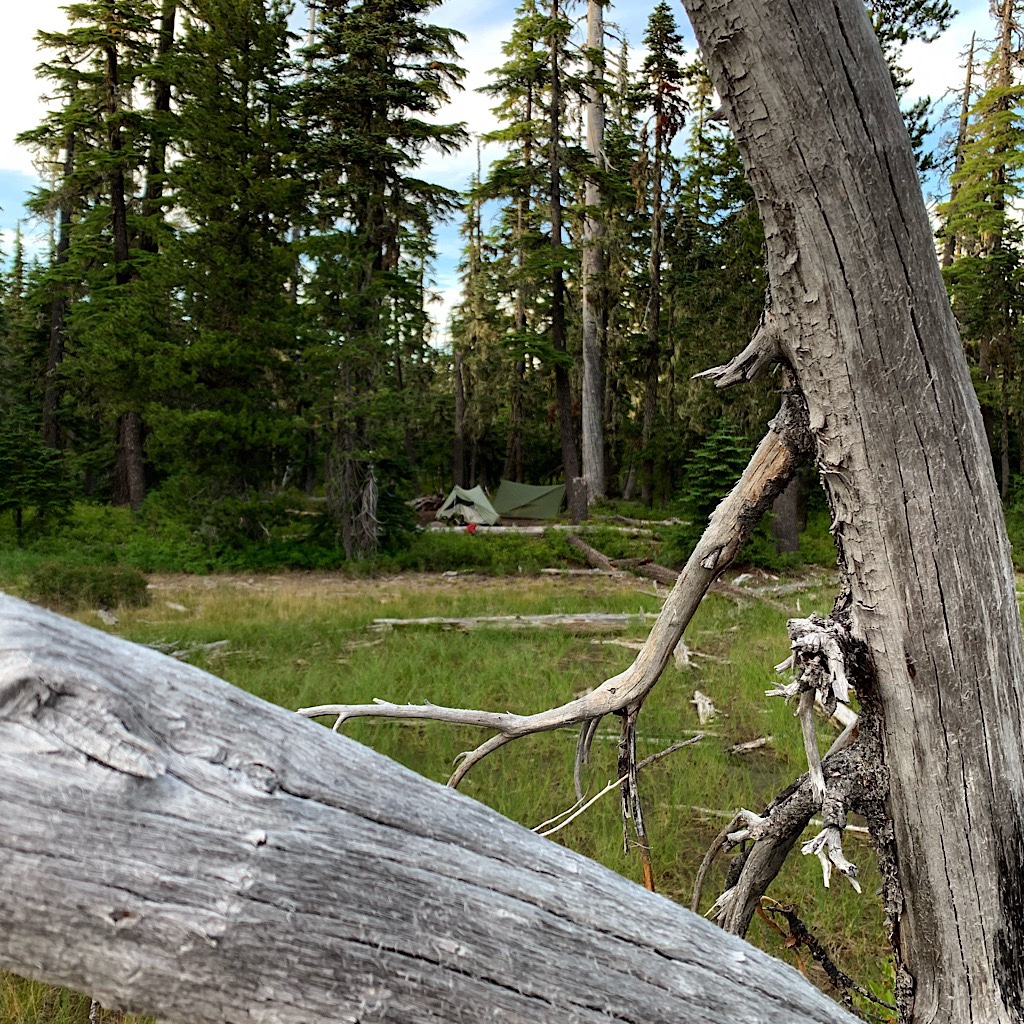 One thing I do get, though, is the world is made up of all kinds and I prefer spending time with the kind who takes mosquitos in stride, seeing the world as a glass half full. Like yesterday when I met a group of hikers and shared a laugh about using sticks to develop our deltoids and not get ‘teacher arms.’ Or just now at a tiny pond meeting a thru-hiker and deciding to go just a few more miles to a magical pond. He’s called ‘Gretzky’ because he’s the spitting image of the great one.

Gretzky and I set tents next to each other. He dives in and cooks dinner fully protected. I stay out in it, exploring a tiny rock island above lily pads and dragonflies, mosses and sunken logs. I wash up and make dinner, a soft breeze keeping most of the bloodsuckers at bay. It’s quiet and magical when G-Punk arrives! I thought she was far ahead, but she took a few days off. She tells me Katherine – from Washington – proposed to her boyfriend and is getting married.

Punk sets at the edge of the pond and we’re all tucked in when ‘the kids’ come banging in loudly looking for spots. It’s really too small, so they move on. I guess, in the end, I’m happy being in my own space and moving in my own time. I’d rather not travel in a big group.

It’s quiet but for pond noises and high pitched mosquito buzzing around my tent. I feel strong and well, looking forward to tomorrow’s lessons and surprises.