I don’t believe in luck. It’s persistence, hard work and not forgetting your dream. – Janet Jackson 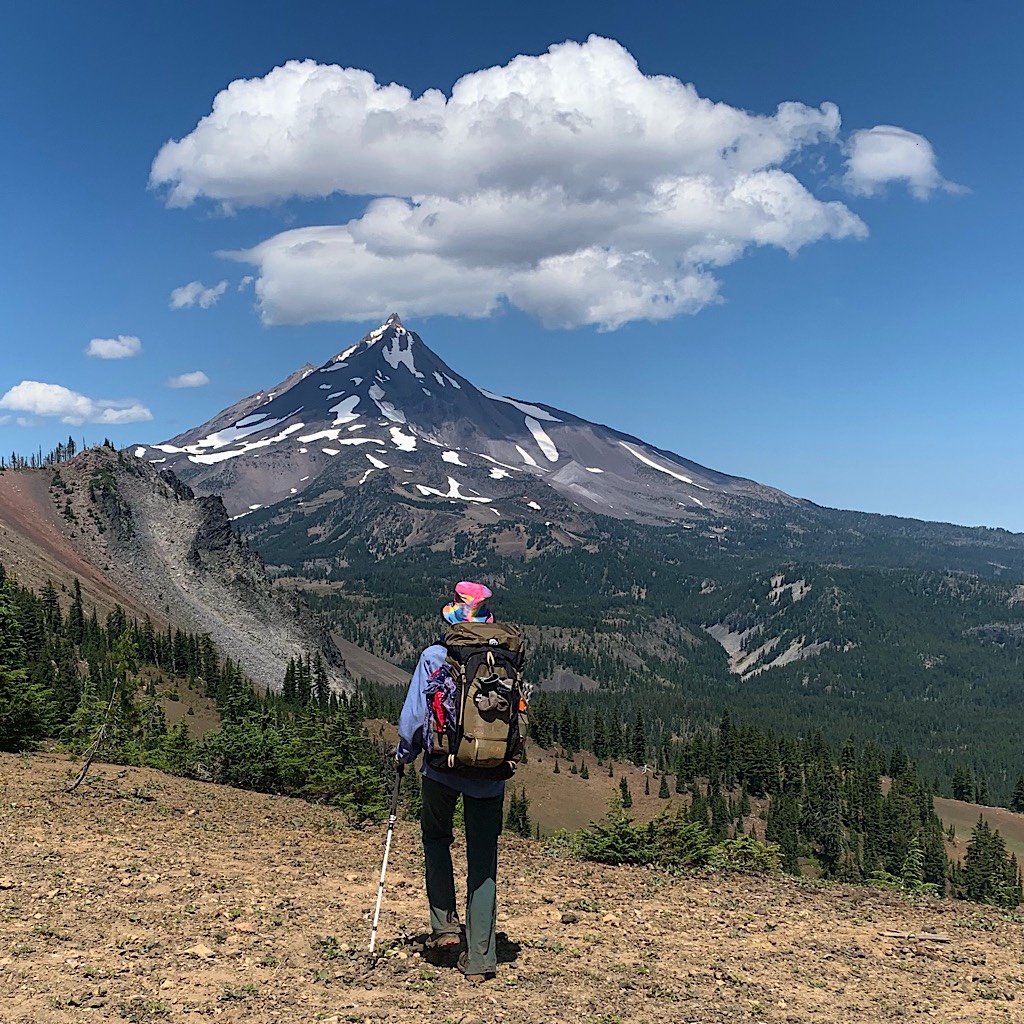 The morning breaks with sunlight on my mountain and mosquitos up my nose. It’s a bit brisk camped here next to a lake, but that does not deter these kamikaze blood suckers. Argh, one just flew straight into my eye.

I do a little mossie dance to shake them off while I have another mega tuna packet and chococoffee with an epic view of Mount Jefferson. 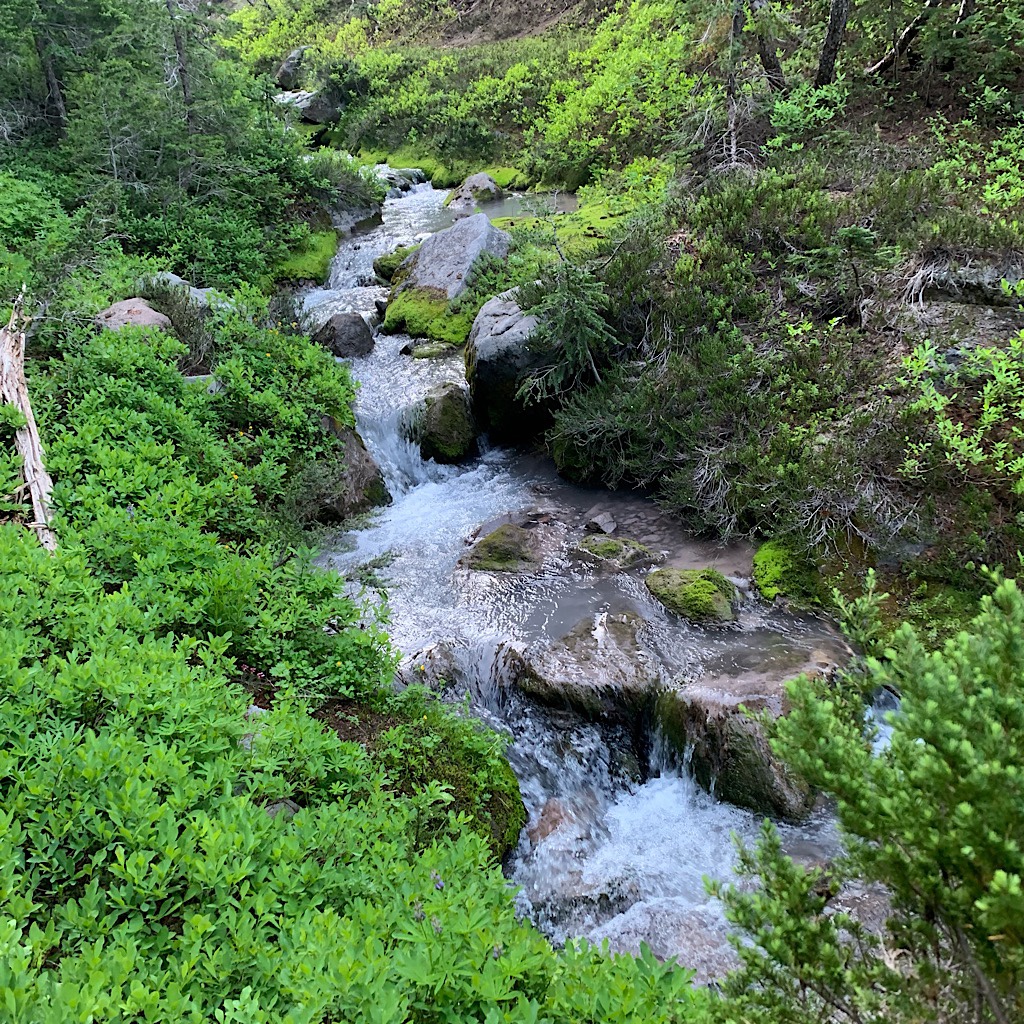 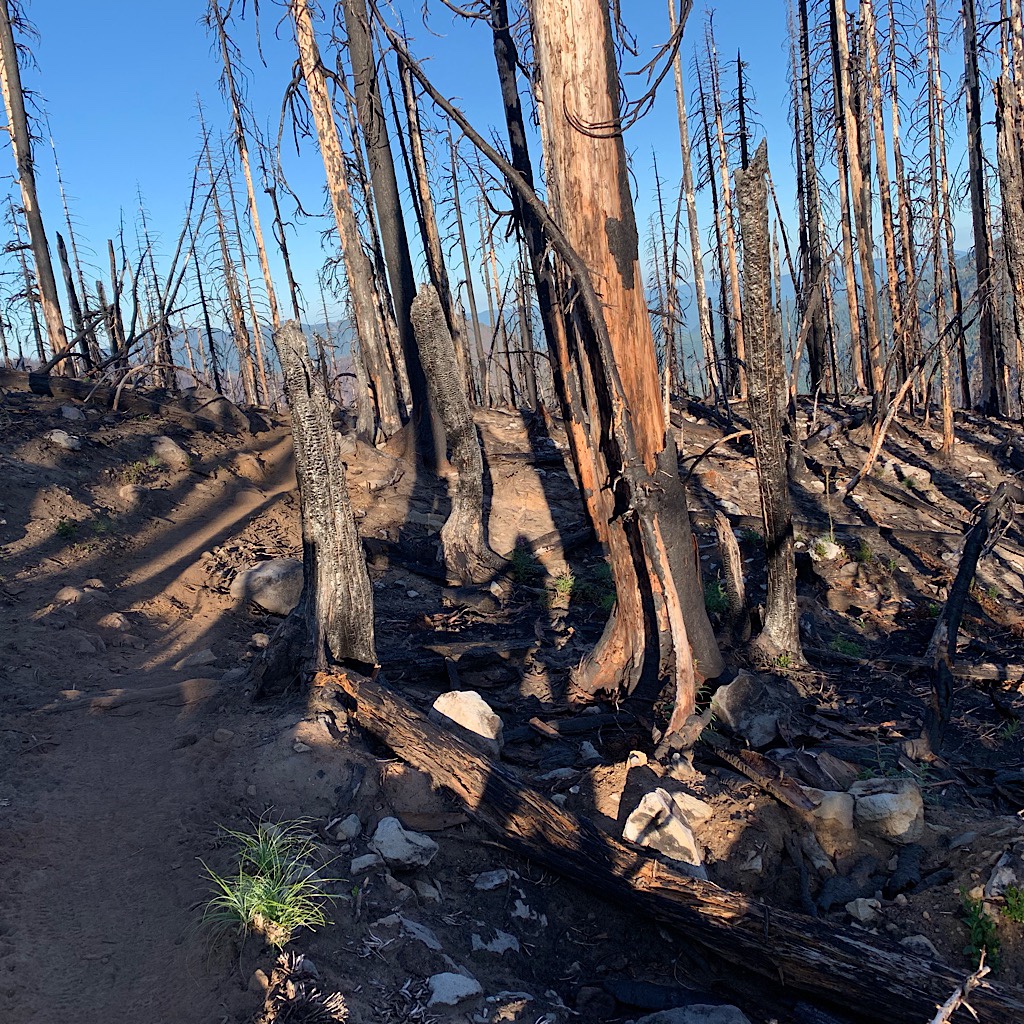 Yesterday, there was a really cute gal dressed in fatigues who was hiking with a few guys using rap to motivate them up the mountain. She saw me filtering water at one of the ponds and asked to take my picture, telling me I look so self-possessed and put together, like I have everything worked out. I laugh now thinking about it. I appear that way? Must be the Oxford shirt, tie-dye hat combo. I’m back in the uniform and ready to roll, send Richard a note that I’m starting and fire up the tracking and off I go.

Soon I hit a burn area from a recent fire, just 2017. The trail is beautifully cleared, but the ash mixes with dirt making a soft but dusty walk. The trees are so freshly charred, they glisten a shiny black. 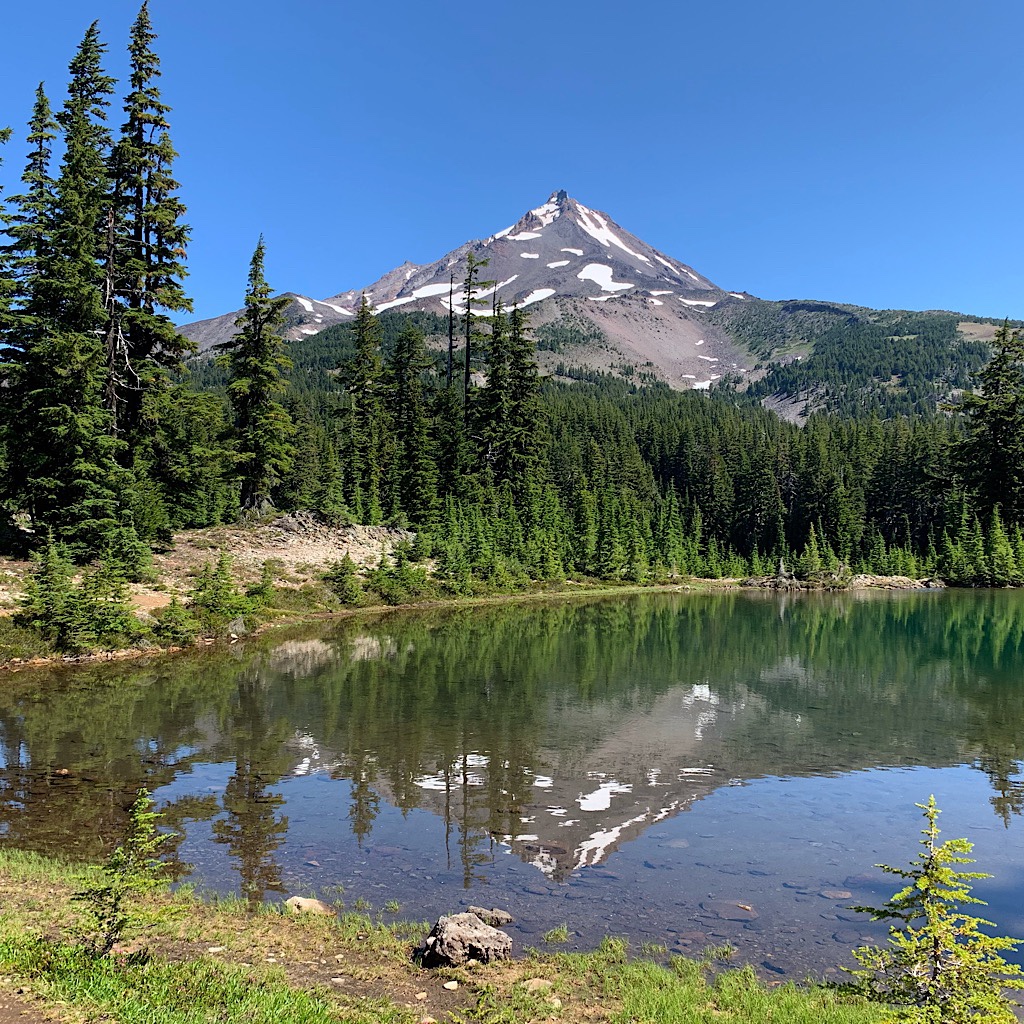 I said yesterday that the morning miles fly – which is true, but they also feel hard to start, my legs heavy at first, my mind unsure if I’m getting a bit sick of the routine. And yet, when else will I have a chance to do this but now? Soon I’ll be onto a new job or career or city and these long stretches of empty time may be unavailable for a while.

I also realize this walk will change me in ways I can’t know just yet. I’m already lightening up and I like it a lot.

I walk in shade all the way down to a rushing milky river and use my New Zealand skills to carefully rock-hop across, making note of the fall line. The trail here goes right back up for nearly ten miles beginning in a dark and dense forest. It feels lonely in my squishy, wet shoes, like I’m the character left in the wood from some fairy tale.

I think of the sadnesses in my life – sexual harassment, physical assault, defamation, dystonia. And then I think of my blessings – my awesome husband, my mom, my strong legs – and I realize all that bad stuff is in my past. It has nothing to do with me here in this forest in Oregon. 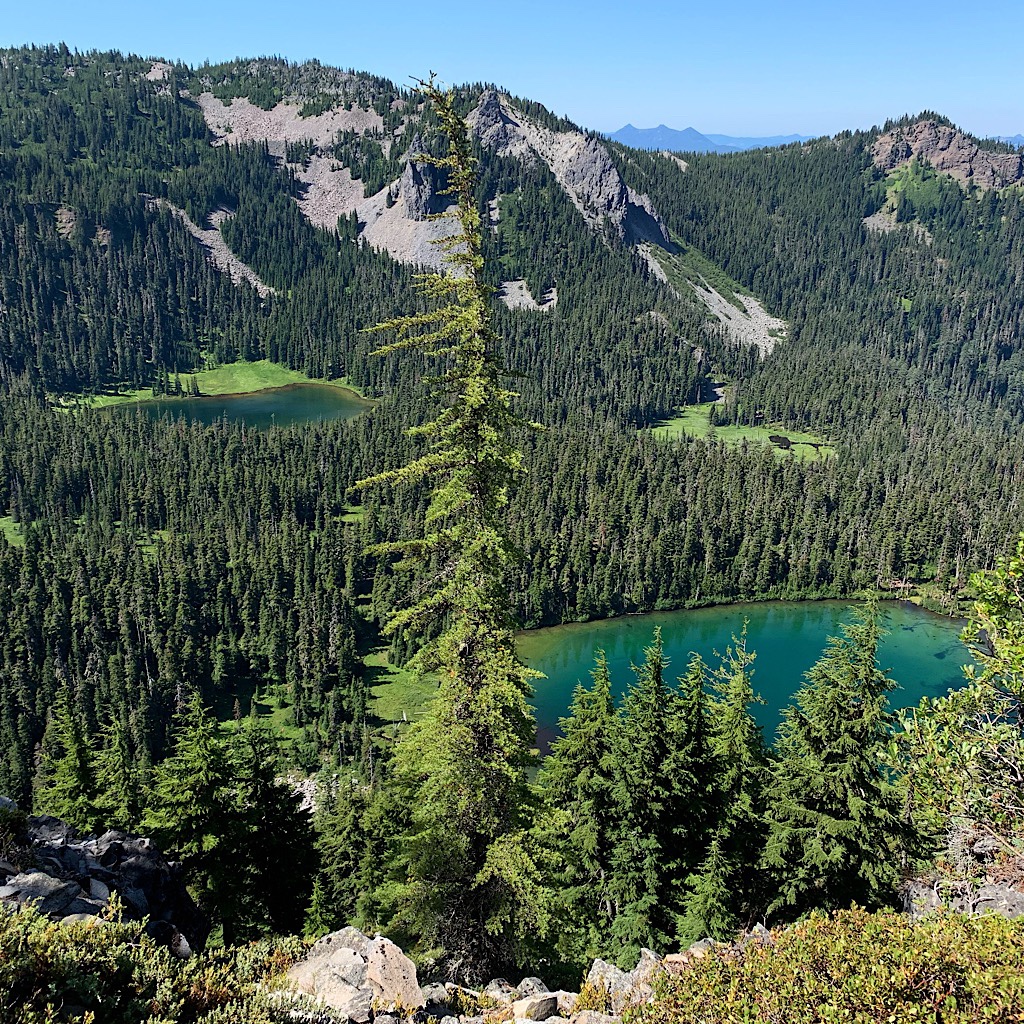 I spy one rhododendron that’s lost its pink flower, petals strewn on the trail. Since I’m headed south, they’re probably not blooming again until next spring. Still, the forest is full of wildflowers and bees working the nectar.

Just for the record – Oregon is not flat. But the trail feels easier than Washington. I get high very fast and see emerald green lakes far below and fanciful rock outcroppings. I come to Shale Lake, a restricted access area. But no one seems to mind if I get water and camel up a liter, plus throw in a spare for lunch at a view.

It’s down, then up again where I meet Alan hiking only Oregon and Washington this year. He asks questions about upcoming places and resupply. I recommend going to Stehekin and he’s not sure since some hikers have given it a bad rap. I say support the local economy and enjoy a good meal because the hiking before and after is hard. This prompts him to complain about people passing who barely grunt. I laugh and say most are in a huge hurry or have headphones blasting. At least we talk a bit before parting and I find my lunch spot with a view and extremely aggressive mosquitos. 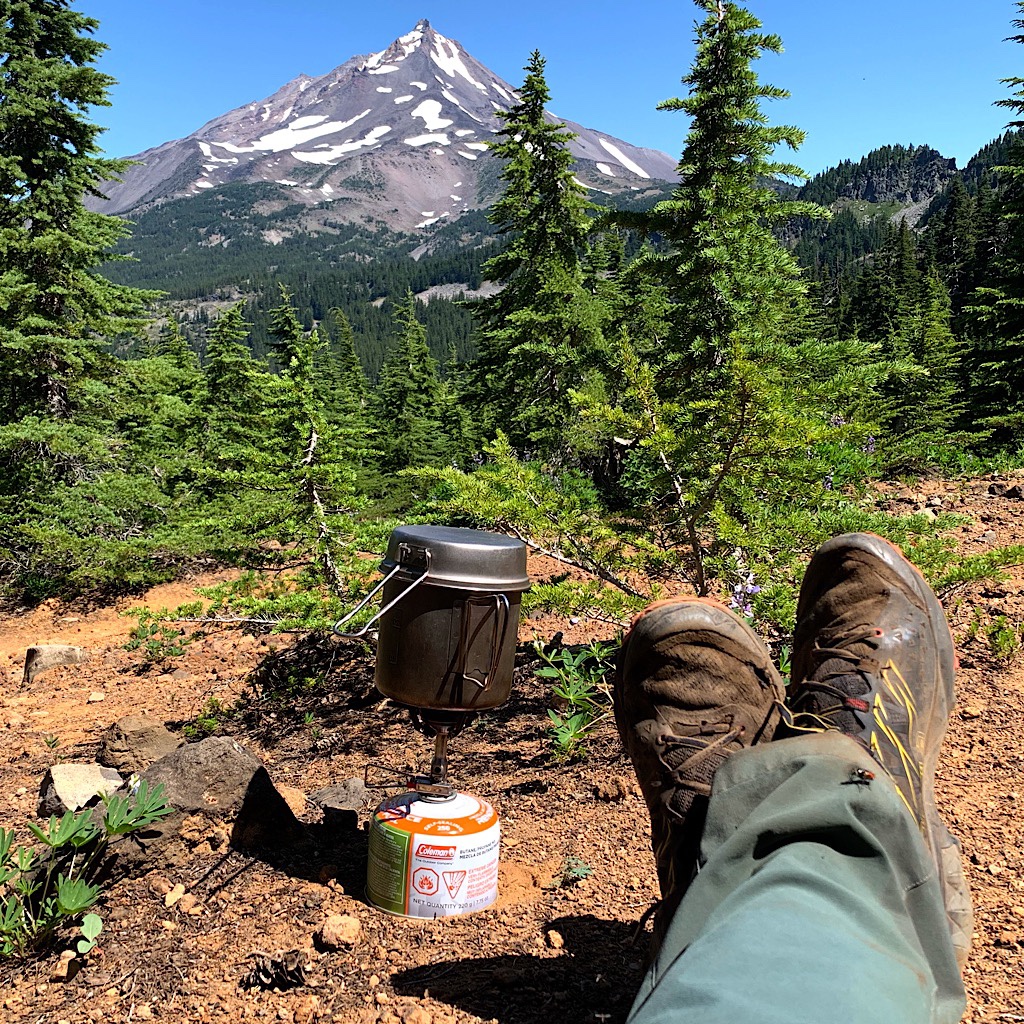 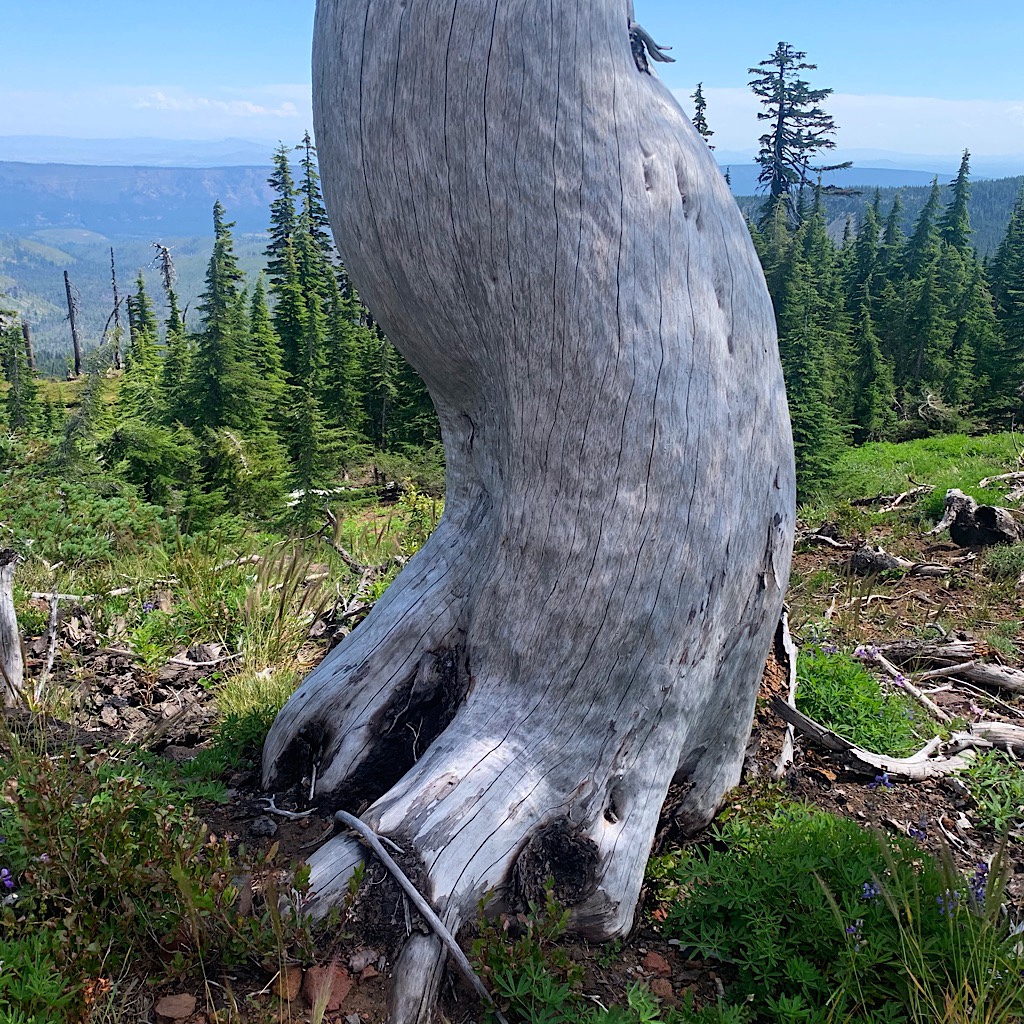 A number of years ago, I did the program called ‘The Artist’s Way.’ It was powerful and useful at the time and helped me do all sorts of creative things. One week, I remember, was about turning off all distractions. This was way before cell phones and social media, so for me, it was simply learning to live – one week – without TV. I was a bit addicted and used it to distract me from myself. At first, it was agonizing. But eventually I enjoyed silence and my own buzzing brain.

I’m not a purist and I accept the reality of headphones on the trail, but I am happy hearing the wind, the water, the bees and the birds. I think we’d all talk to each other more too and not grunt while passing.

The terrain is misleading and there is no way to tell if that it was a huge descent then another ascent to get to this place. I pack up and sidle the ridge-line on one side then the other, with more spectacular views of the perfect isosceles triangle of Jefferson. I enter another burn area sweeping down into the valley, all silver trunks. I’m awestruck with this incredible vista, austere and grimly frozen. I wonder how long these trees lived, how hot was the fire to kill them all and how long will they stand here. 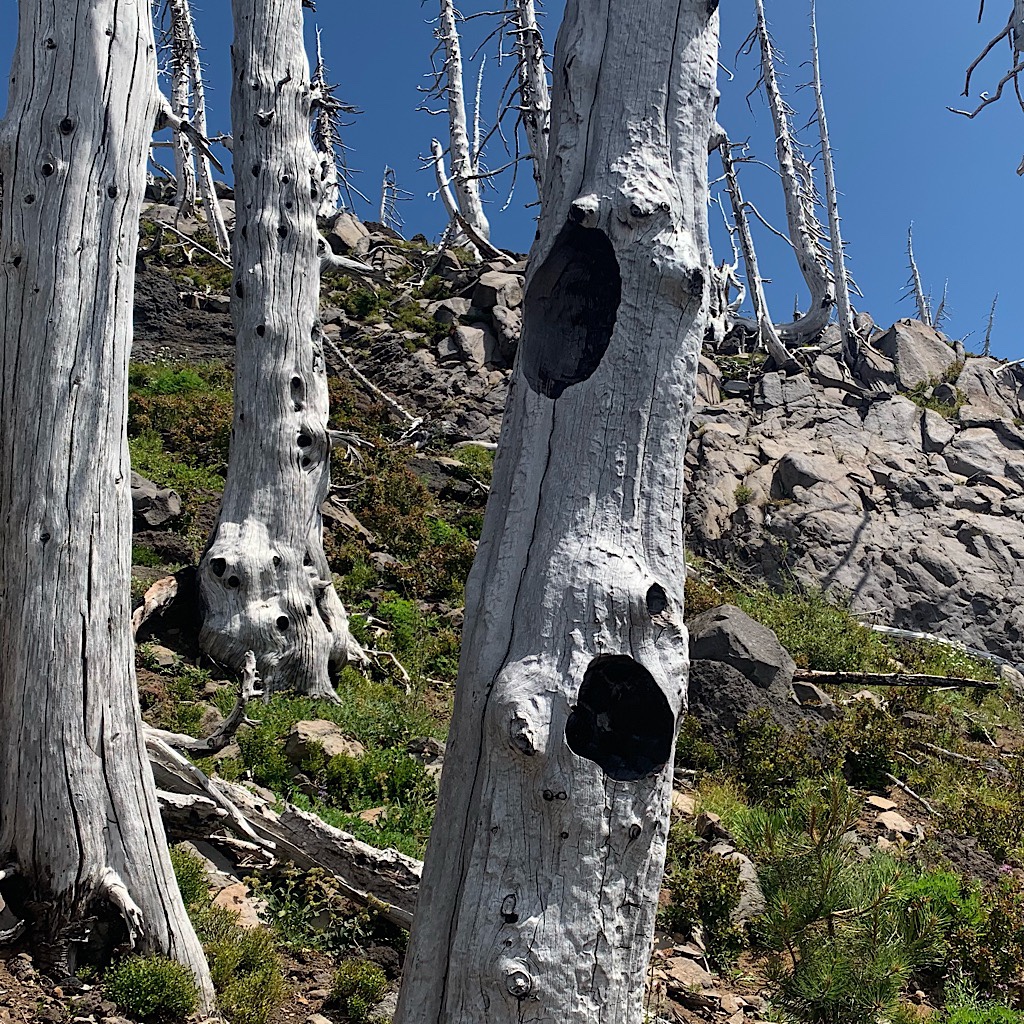 From here, I can see Three-Fingered Jack, a huge rock monolith, and also the Two Sisters, snowy and flirty, two heads cocked to opposite sides. The only sound are my sneakers on crunchy pumice gravel and my breath.

Yesterday, Bat tells me she’s torn between going fast – so she can see her family before leaving to work in Antarctica as a janitor – and going slow enough to still enjoy her walk. Aren’t we all torn? It may take the entire hike to sort that out in my mind. I guess like anything in life, hiking is not always blissful. But I try to balance an attitude of curiosity and being present with needing to get somewhere.

It matters right now because I drank two liters of water, but I’m not carrying any and my next source is still a long way off. I try not to think about being thirsty, which of course is impossible. So instead, I look around and listen. It’s hot and dry, so wouldn’t you know a cicada is playing several whole notes, arco. I stir up butterflies – white, orange, little blues, stained-glass in black, yellow, orange, a black one with yellow lace – they twirl and dance, refusing my camera. Clackety crickets reveal dusty yellow wings when they jump. I hit a random snow-field seemingly looking jealously at Jefferson’s flowing white icing. “Hadn’t you heard it’s August?” I ask the sad melting mass.

I come to an area that is absolutely flat and I have no idea why. A pile of pumice welcomes me. A few low, clingy flowers grow on dusty ground. In no time, I arrive at Rockpile Lake and quench my thirst. The next water is just four miles away, all downhill, so I head out thinking I might make dinner there to avoid carrying too much over a pass. 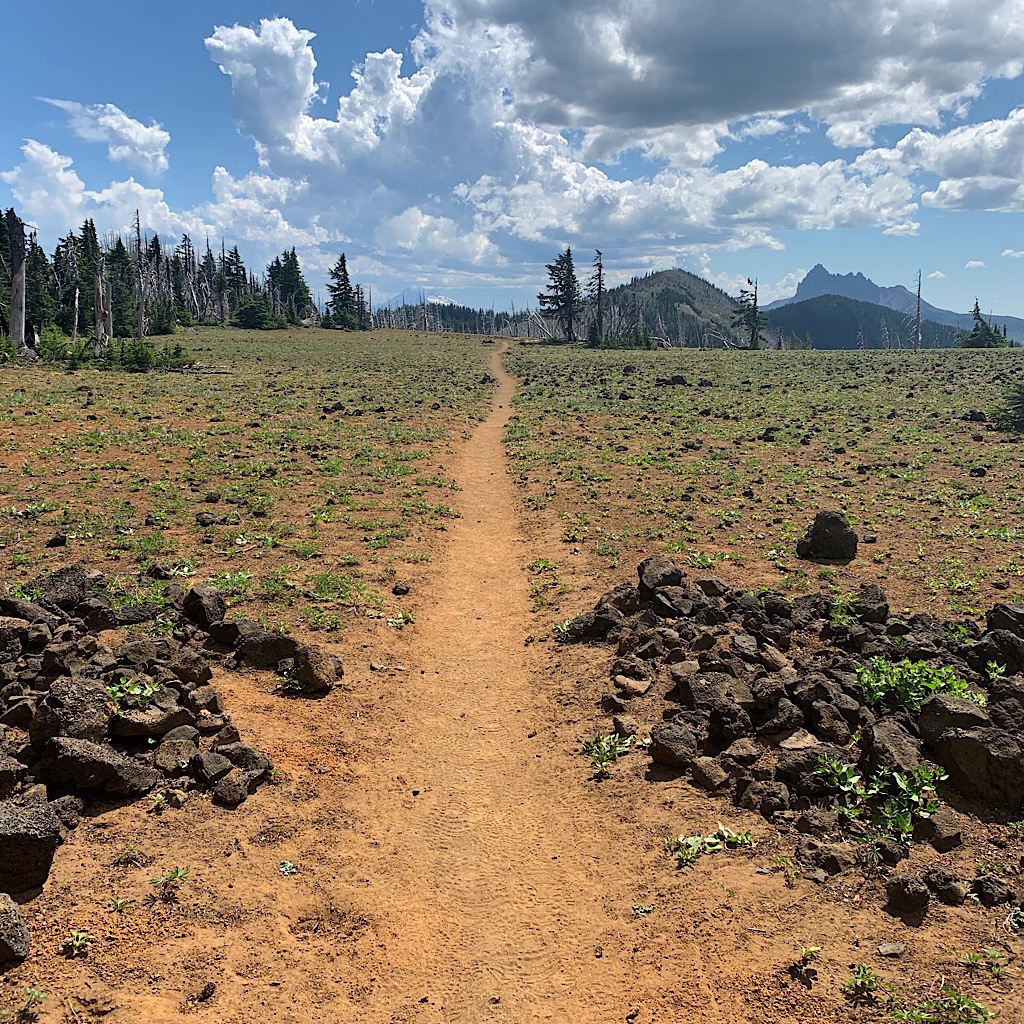 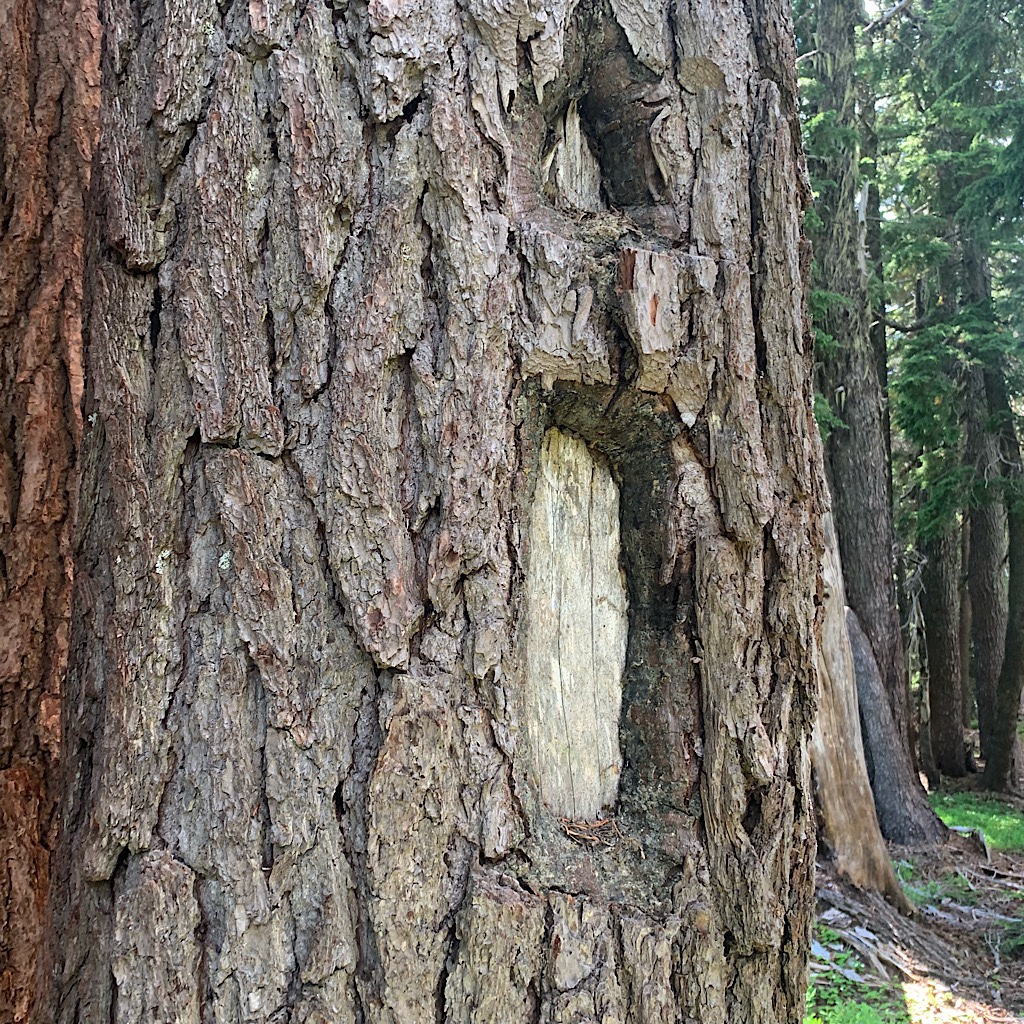 The clouds are lovely casting beautiful shadows and making interesting pictures, but they’re building and getting blacker over the Sisters. Three-Finger looks ominous and Mussorgsky’s ‘Bald Mountain’ accompanies my walk back into a burned area as thunder begins to rumble.

Soon, the Sisters disappear in rain and the thunder gets louder and longer. It’s in the clouds right now, with no ground strikes, but it has me hustling through this forest graveyard. A few drops hit me, then I see to my left, the valley is shrouded in mist. I hurry to put on my raincoat as hail bursts out of the sky. It’s small and pure white, almost-squares pinging my jacket.

Just as quickly as it begins, it stops, though the sky is still black and thundery. I meet a couple and ask what they think about camping on the ridge tonight. They’re skeptical, but feel the storm is passing and I should pop over pretty quickly. I thank them and we introduce ourselves. They seem mighty impressed to meet a real SOBO. I guess I must be moving fairly fast if they haven’t met so many others 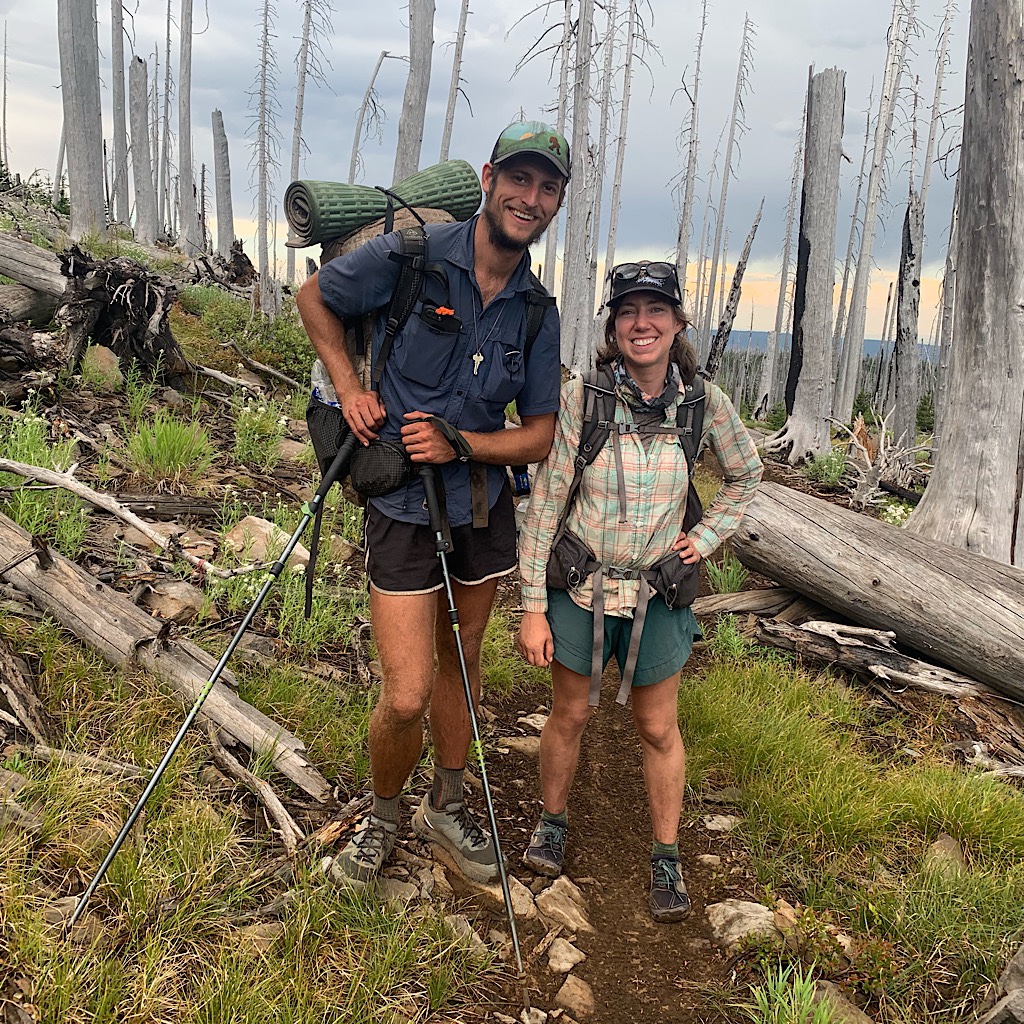 I scurry on down to a series of ponds still in the burn zone. I figure I can cook dinner and see how it goes. Just as things heat up, it begins to hail again – big, splattery snowball-like hail. I quickly set the alicoop just in case things go downhill.

But it stops. I eat up and as the sky clears, I realize I want to see the views from above. So I stick with Plan A, packing the alicoop, collecting water and setting off. It’s a glorious climb as I pass a couple, thirsty and shell-shocked, telling them the ponds are awesome – and only two minutes away..

It’s a ramp up through rock and charred trees, Mount Jefferson in my rearview mirror. I get right on the saddle with Three-Fingered Jack, his facade shot through with huge dykes in gray and brick red. At the ridge, the views are breathtaking over waves of mountains. I see campsites scattered about, but I read about a very special one, so keep walking on rocky terrain, down and down until it’s green and alive again. At just the mile marker, I take a right turn and there’s my perfect site – a space big enough for one and a rock verandah leading to a vista of the Sisters. I catch it just in time for sunset and my dessert.

Such a magical day and time to let my eyes close on it. Sweet dreams!