If you don’t like the road you’re walking, start paving another one. – Dolly Parton 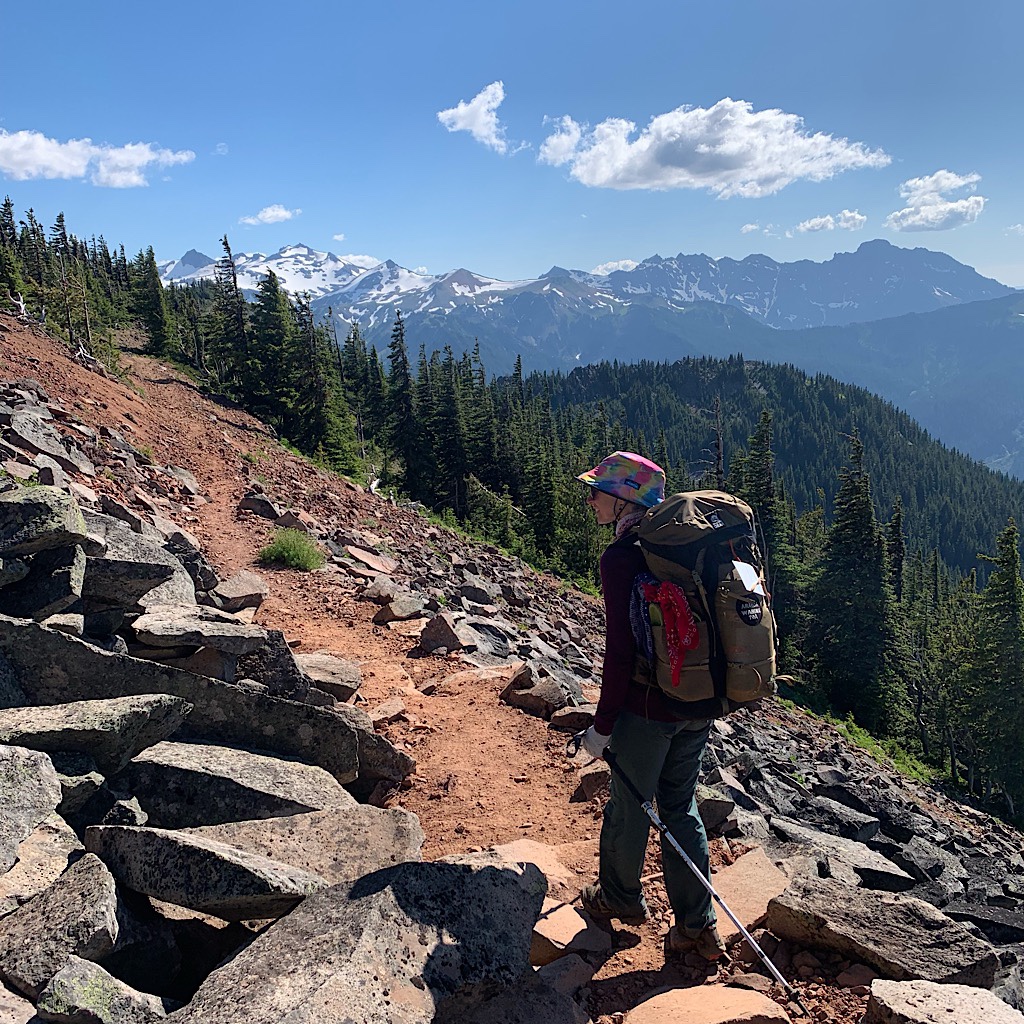 The morning is pinky orange clouds reflecting off our magical fairy pond. An idyllic spot, but like the Maori legend about the sandflies, this place is a mosquito incubator and it keeps this paradise something one can only pass through briefly.

One by one we pack up, put on our bug burkas and head into the forest for the seven miles into White Pass where Richard sent me an eight-day resupply for the next section and I can charge my battery and eat junk food. 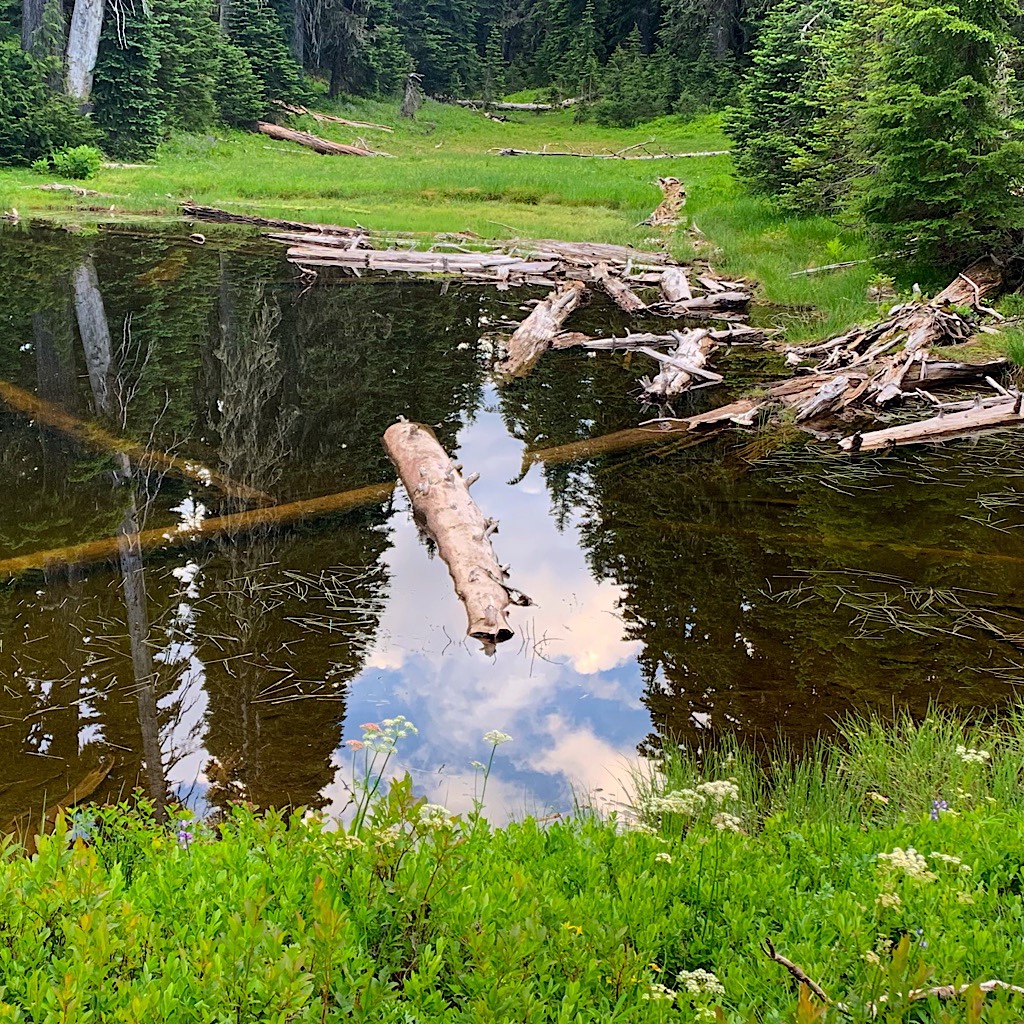 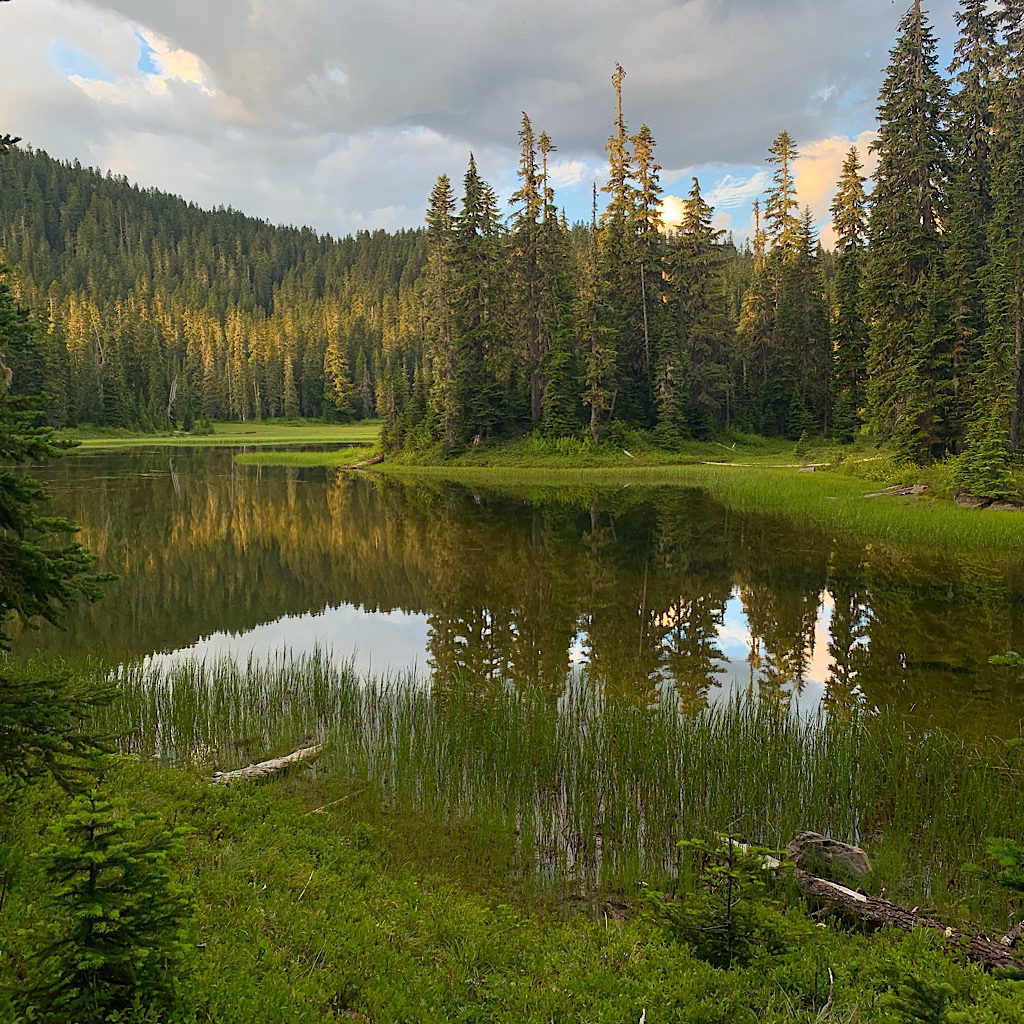 It’s a forest walk and I move fast. I catch Cheerio and we fall into conversation as we pass one pond after another including one named Buesch for a man who died while trying to stock it with fish.

I can hear the road noise still deep in the trees. Did I tell you about the young man who arrived yesterday while we were all in our tents trying to cook bug-free? He just walked through and headed straight to the water without even a grunt of hello. I asked him his name which he said was “E.T.” but said nothing else until he heard Cheerio speak and then had to let all of us know how he’d gone to Oxford for economics. Well obviously not to major in manners.

I’m meeting interesting characters – some lovely people like Chris who I hiked with yesterday, both interested and interesting. Then there are some less so, who act entitled and full of themselves. I meet some of these at the Kracker Barrel after we walk up the road a half mile. 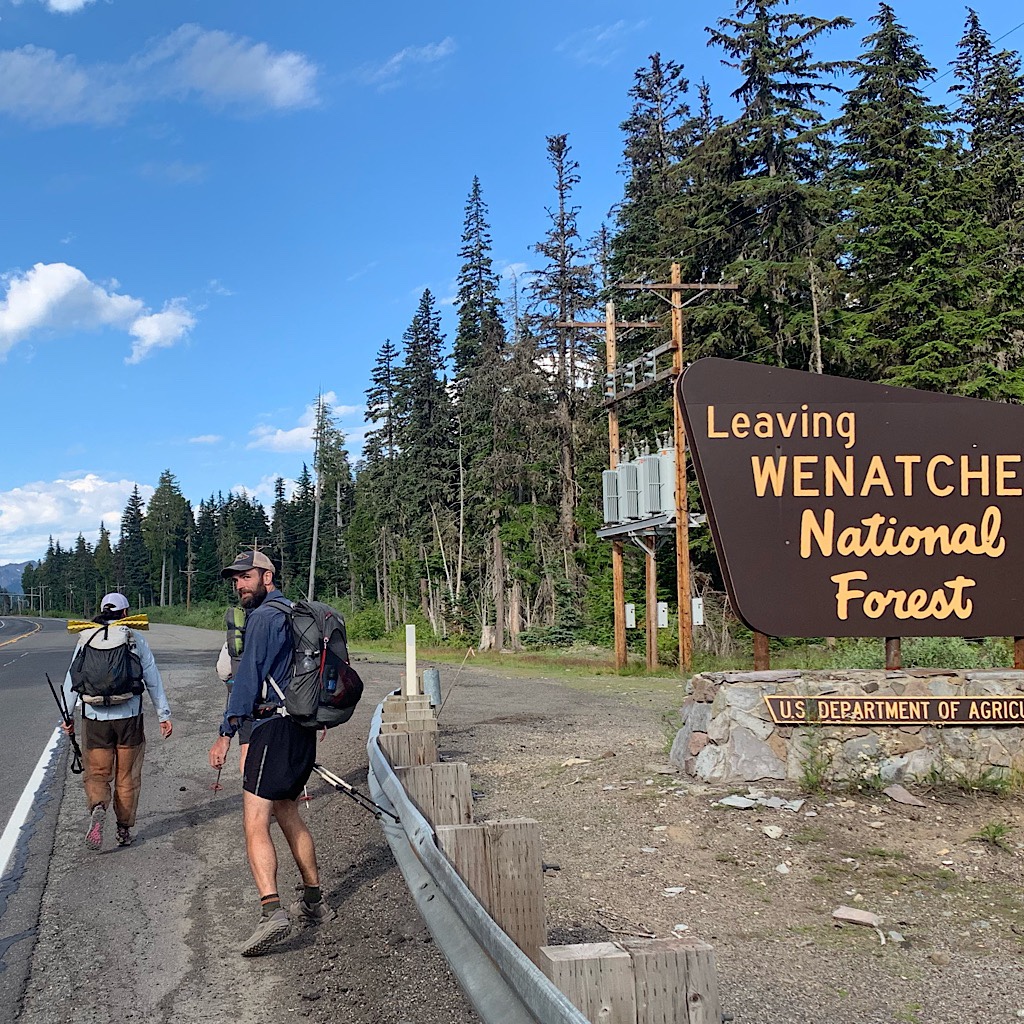 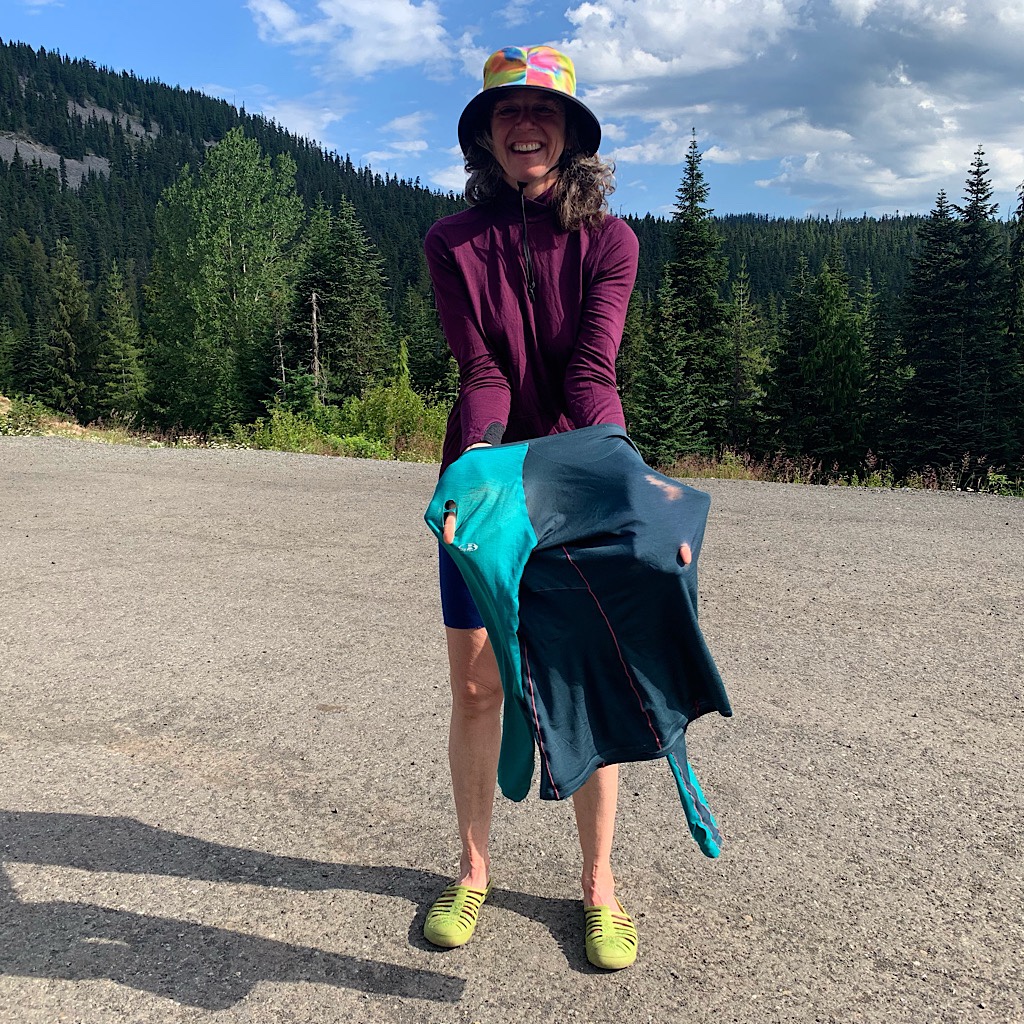 There’s a small group of Austrians – but also an American who should know better – walking barefoot in the store even after the proprietor asked twice for them to put on their shoes. There’s even a sign saying ‘no shoes, no service.’

It’s not that I’m a rules person, but it’s just obnoxious and makes all of us PCT hikers look bad. I try to suck it up, but I get pretty judgy. The funny thing is that as we collect clothes for laundry – Zach, Cheerio, Sweet and me – I decide the time has come to throw out my Te Araroa merino T-shirt. I brought it because I thought there might still be life in it and I couldn’t find a replacement before leaving. It lasted this one section eventually developing huge holes on the back and shoulders The mosquitos didn’t need to work very hard to feast on my blood.

Just as I go to ceremoniously throw it out, the gal who was so negative the other day about the forest, perks up to tell me how she likes to take strips of material from her friends’ discarded clothes and make bracelets out of them. She says, “I usually do it with people I know better – what’s your name, again?” ‘Firesock’ eventually ties pieces of my shirt onto both of our wrists.

The time at the Kracker Barrel drags on. I eat too much junk food and struggle with wifi. I call home and organize my extremely heavy food bag. I didn’t have quite enough food for the last section and now, I’m completely overstocked. I guess this way I can take my time if I choose to. 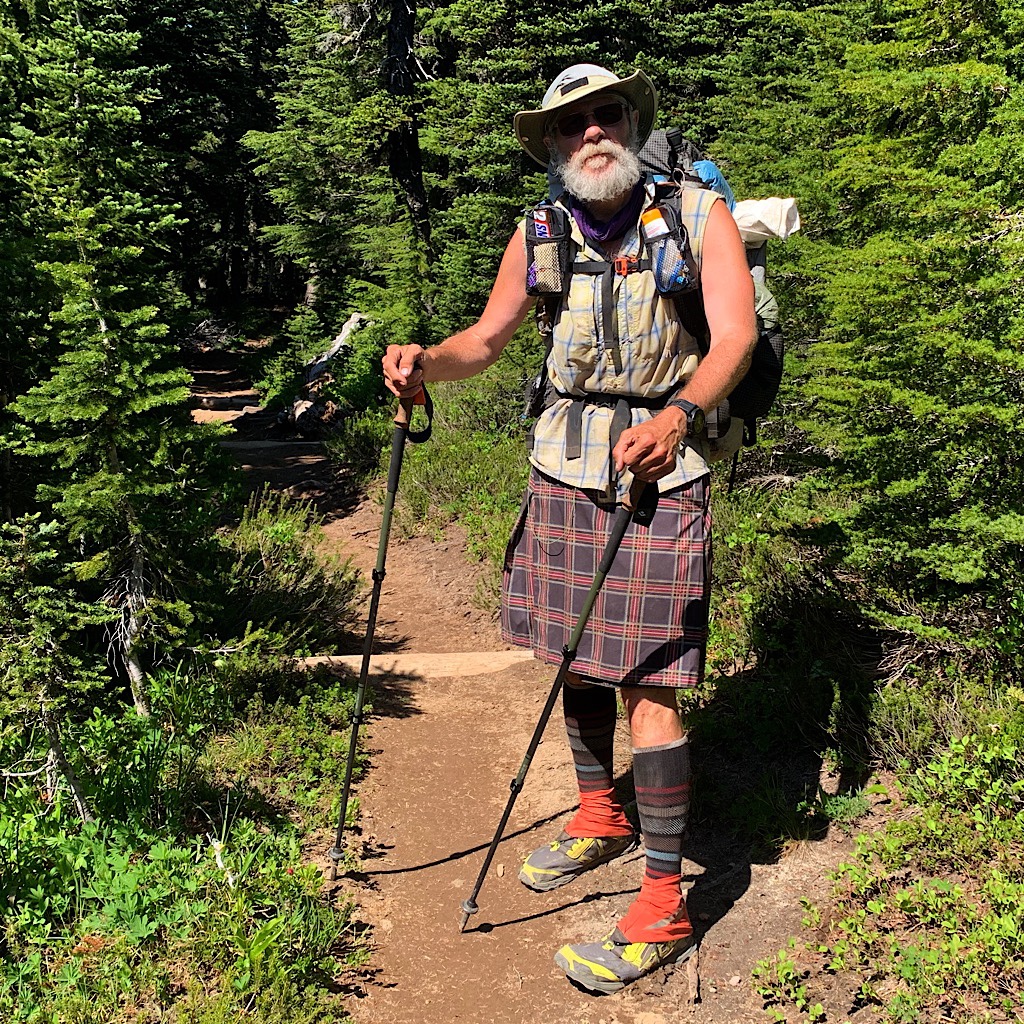 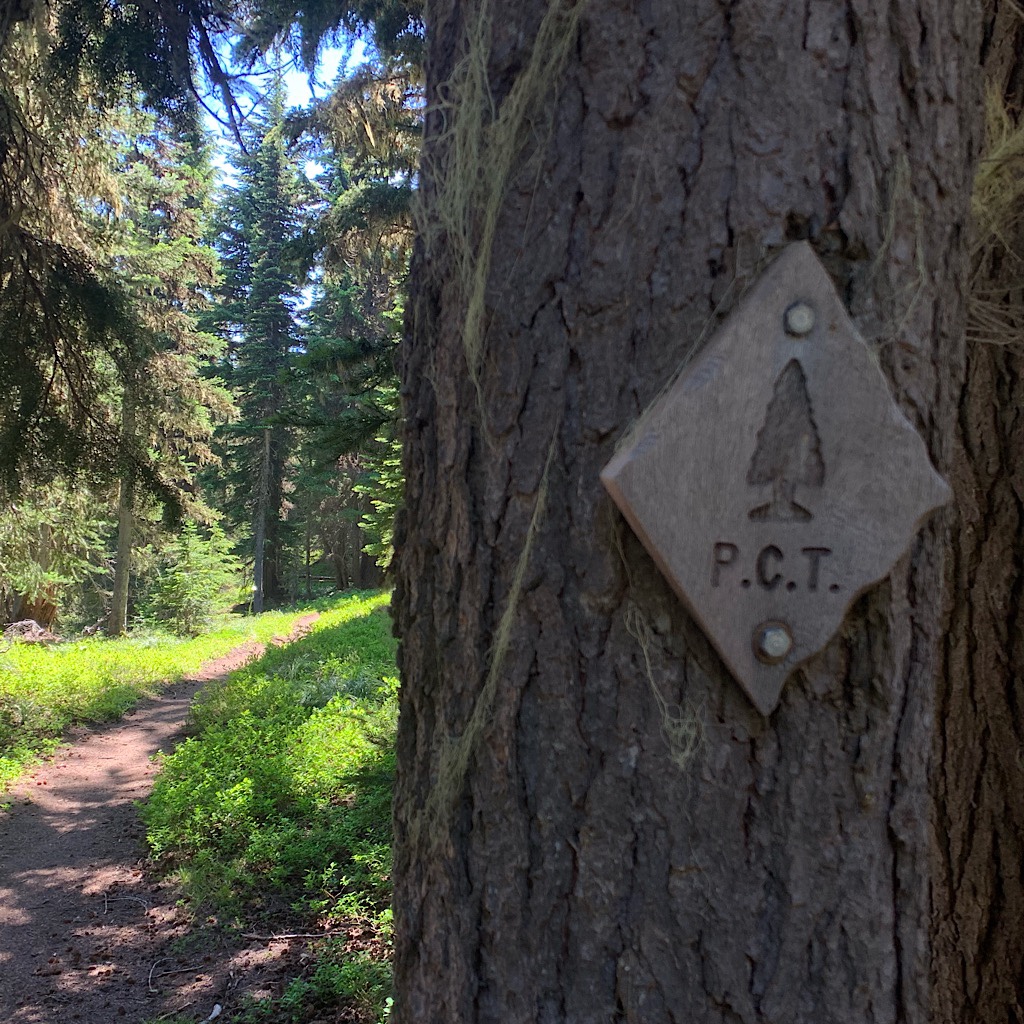 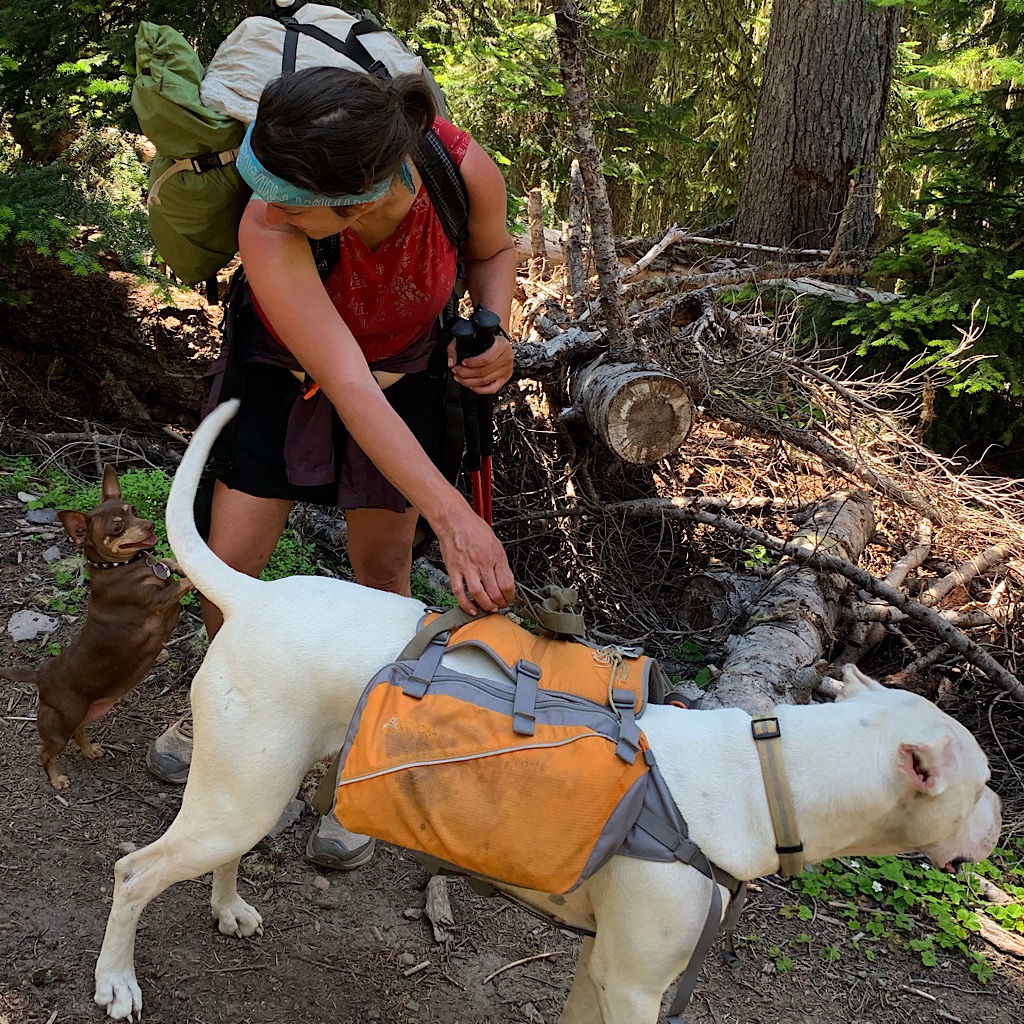 I’m afraid of the climb ahead. I’m weighted down and it’s a long way up. Cheerio heads up with me and we instantly begin sharing about travel, then geopolitics and that morphs into our families and childhoods. It gets me up the mountain, and then some.

I lose Cheerio on a long ramp rise up crunchy pumice. At the top is a spectacular view into the snowy goat rocks we’ll cross tomorrow, Rainier looming over my shoulder. The next traverse is aery as it sidles the mountain, this time on slabby rock. A woman with blue hair and multiple piercings snaps my picture and I snap hers in this gorgeous spot.

But soon it’s back in forest. There’s little water for miles and hardly a place to camp, so I push ahead. Eventually Cheerio catches me and she’s in agony from her swollen knee. She winces in pain, but is not a complainer – or ‘winjer’ as they say in Southeast England, and she just muscles through.

We grab water at a stream and eventually decide to set up in a wide space at a junction with several well-placed logs. It’s late for us, but we eat dinner and crawl in our tents just as Zach arrives. Cheerio is especially happy to see him. I like him a lot; he’s mature and centered for a 27-year-old. 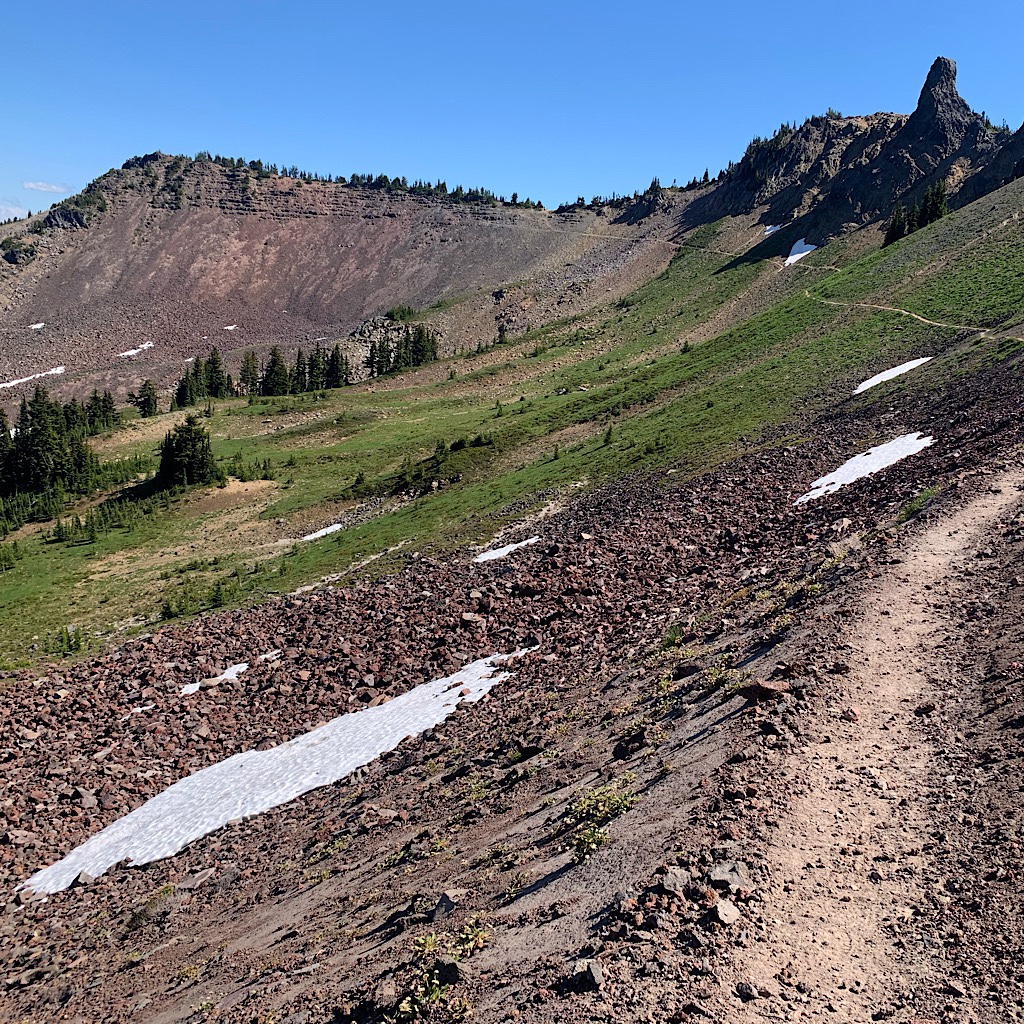 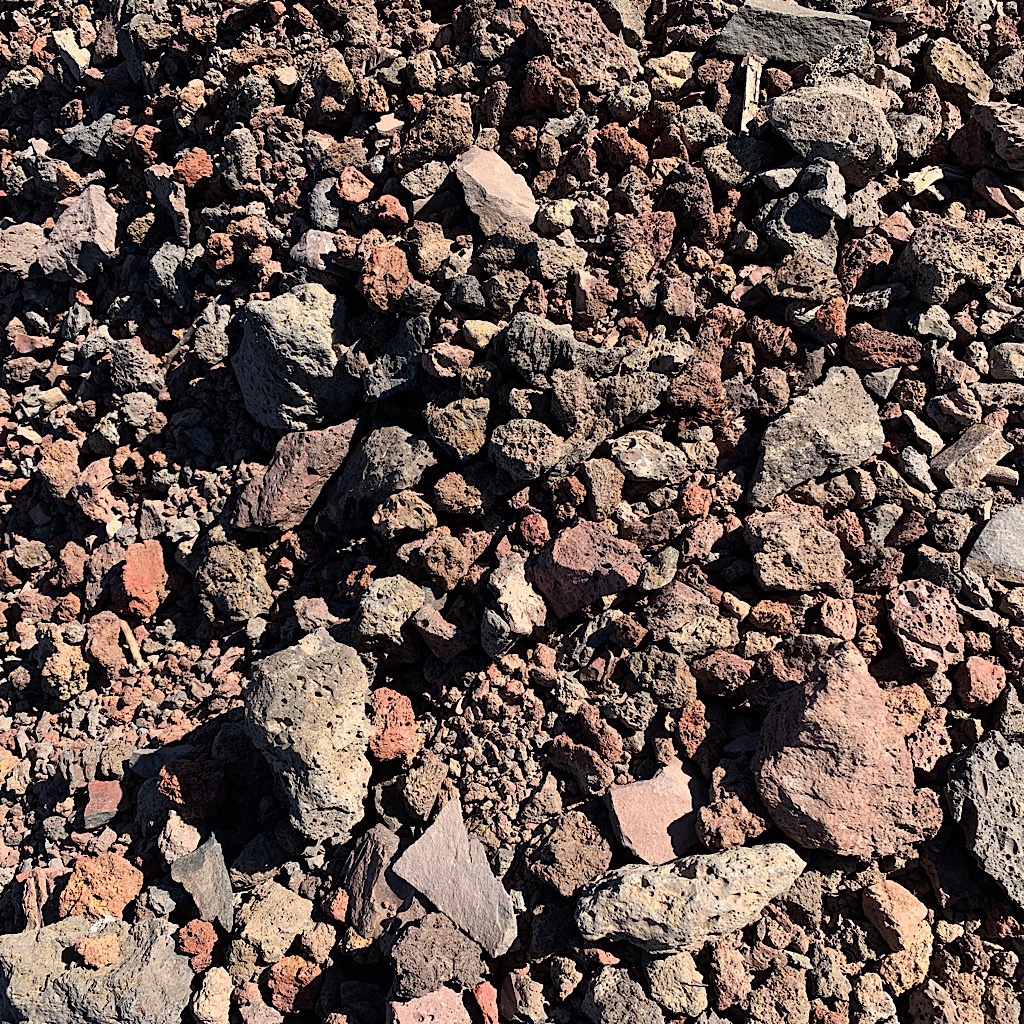 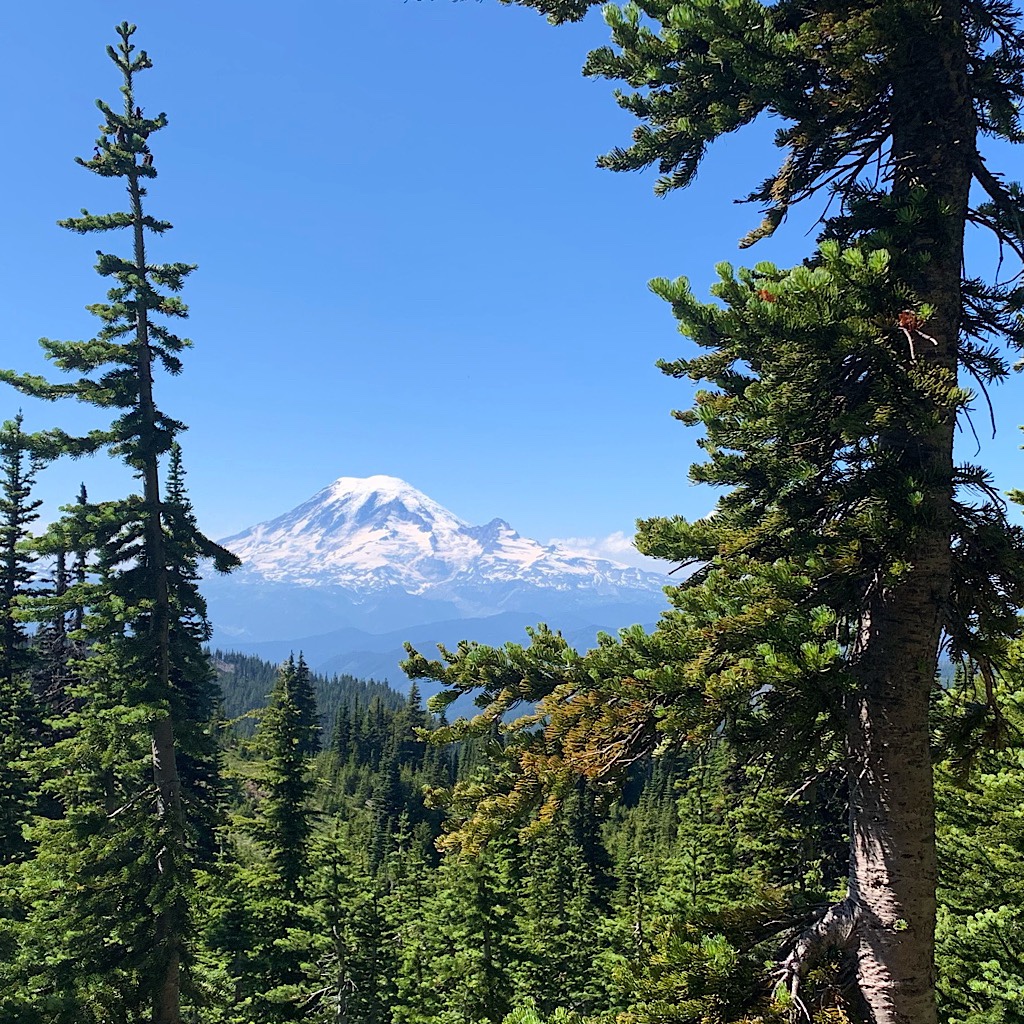 But just as we’re relaxing, the Oxford kid arrives, loud, aggressive. He begins to set his tent inches from me and suggests my trail name ought to be ‘alligator’ because I’m so snappy. I ask that he cool it and it’s quiet for a moment, then I crawl out. I tell him I don’t own the forest and I can’t tell him what to do, but I am his mother’s age and I don’t like his energy. Would he please camp a bit further away?

And he says he’s leaving. Praise the goddess. Though I still have a bit of a meltdown. I just can’t stand the sheer number of people – the entitled, loud, aggressive selfishness, the headphones, gotta-make-alotta-miles competition. This beautiful place is turning into a fraternity party, a hostel in Thailand, just another ruined space.

Zach at first tells me that I am one of those people. But I correct him and say I am hiking on an actual permit – southbound, beginning July 1. Many of these people are not permitted to be here but came up from the south. It’s a zoo and I just want some peace. 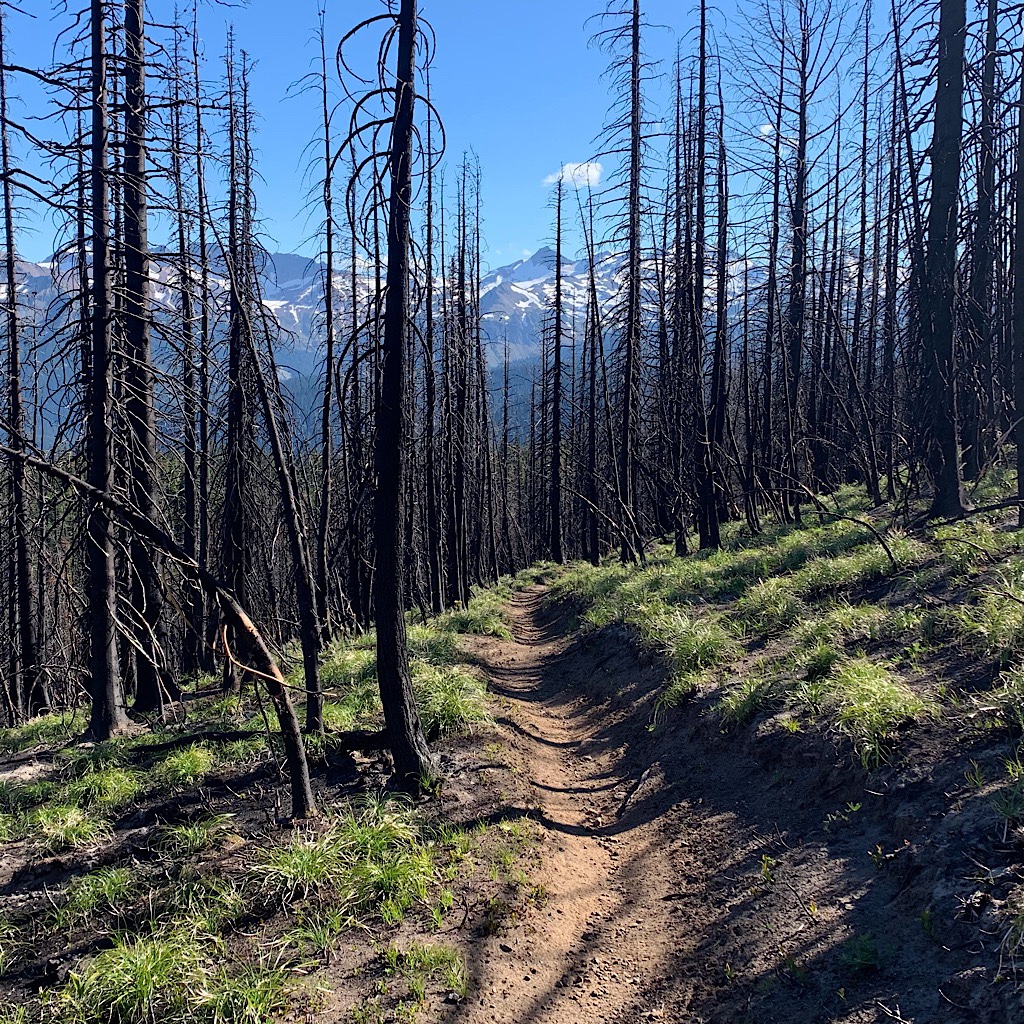 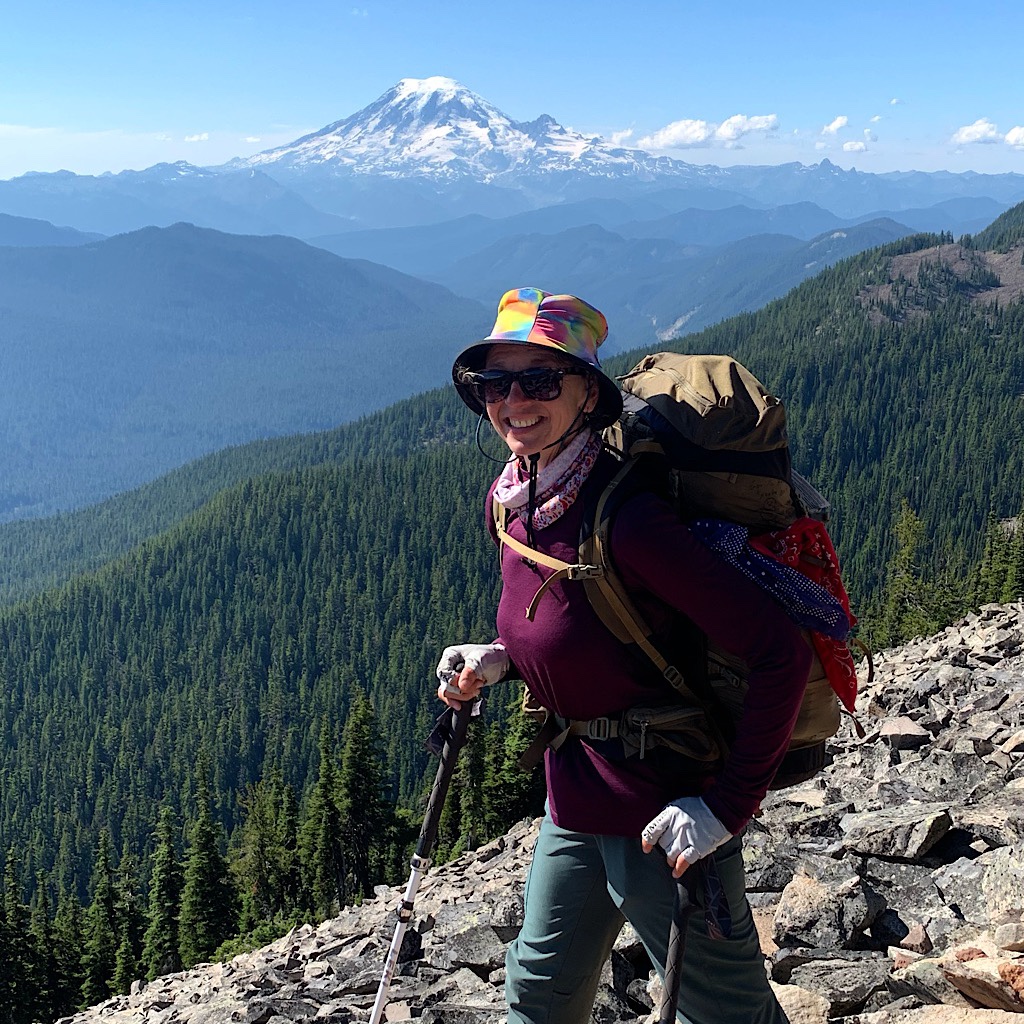 I calm down, Cheerio offers me room to speak freely and Zach tells me I actually speak for a lot of people who are frustrated. The PCT Association is going to need to get strict going forward – fewer permits, more checking permits, limiting the numbers within campsites and those hiking together, and enforcing rules, like quiet.

I thought I was being far too judgmental earlier today, but upon reflection I see my emotions matched the experience. It’s such a shame as this is some of the most beautiful country in the world and to have it become the bar scene of the outdoors makes me a bit crazy.

It’s late now with this split in half day. I still feel strong and capable and Zach assures me that after the first 500 miles, the trail numbers thin out. I’ll be in Oregon then, won’t I? It looks like I’m marching forth. But I certainly hope Oxford walks too fast for me to ever catch up because that boy really needs a good talking to.