I have learned that as long as I hold fast to my beliefs and values – and follow my own moral compass – then the only expectations I need to live up to are my own. – Michelle Obama 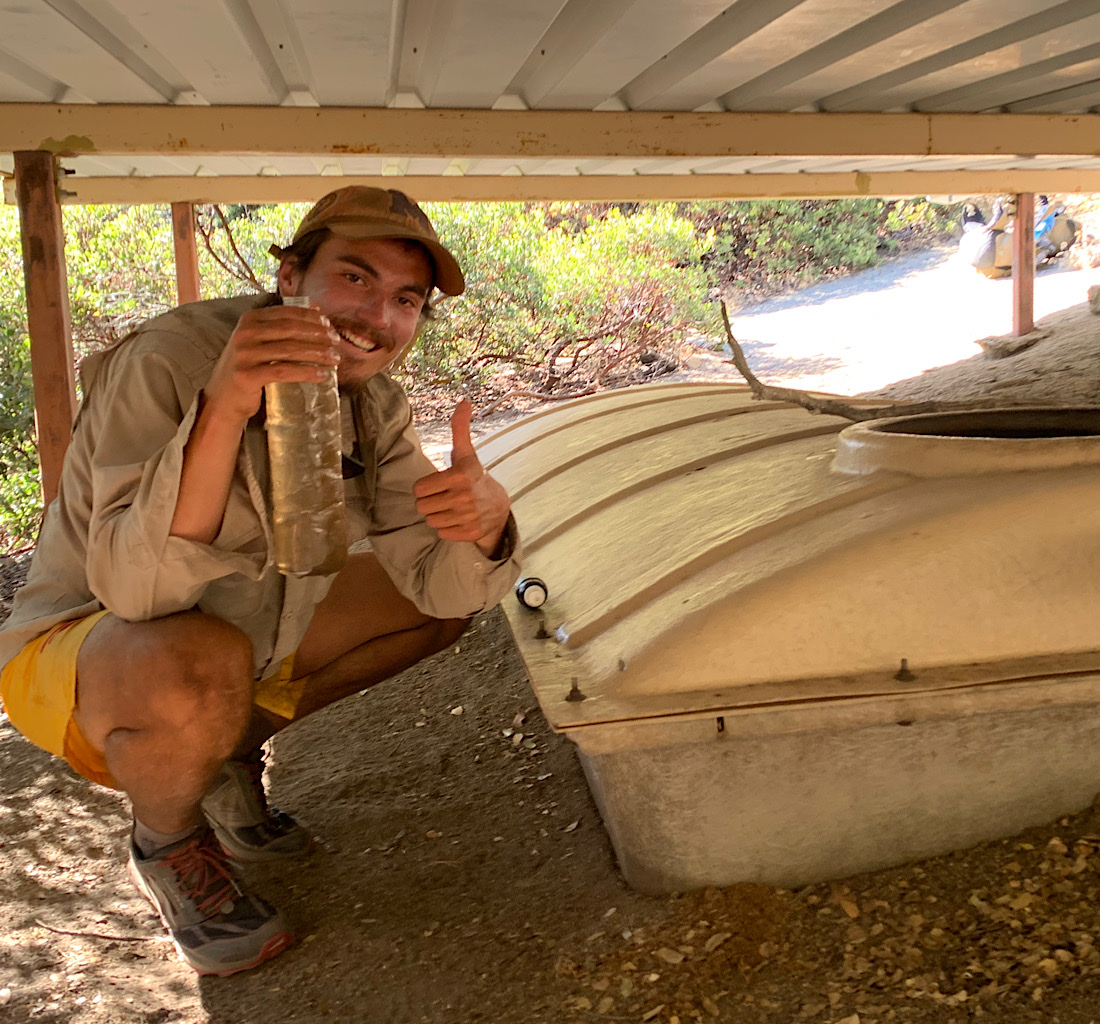 No spiders last night at least that I was aware of. I slept well even with a bright moon and highway noise. I interviewed caretaker Bob for my ‘Peeps of the PCT’ series and he made a huge mug of coffee for me. A three-time Emmy winner, he’s a character and said his favorite hiker guest was Nicholas Kristof.

Last night, Erin told me she nearly stepped on a rattler. It camouflaged perfectly on the aqueduct, never gave a warning before coiling up in striking position. She said, “No, no, no!” and jumped back, much to Rook’s dismay who said she ought to have stayed still. Would you?! I walk today with a little mantra – no sneaky snakes,

no brown recluses becoming less reclusive or black widows taking a break from their widowhood. Everyone stay in your own space! 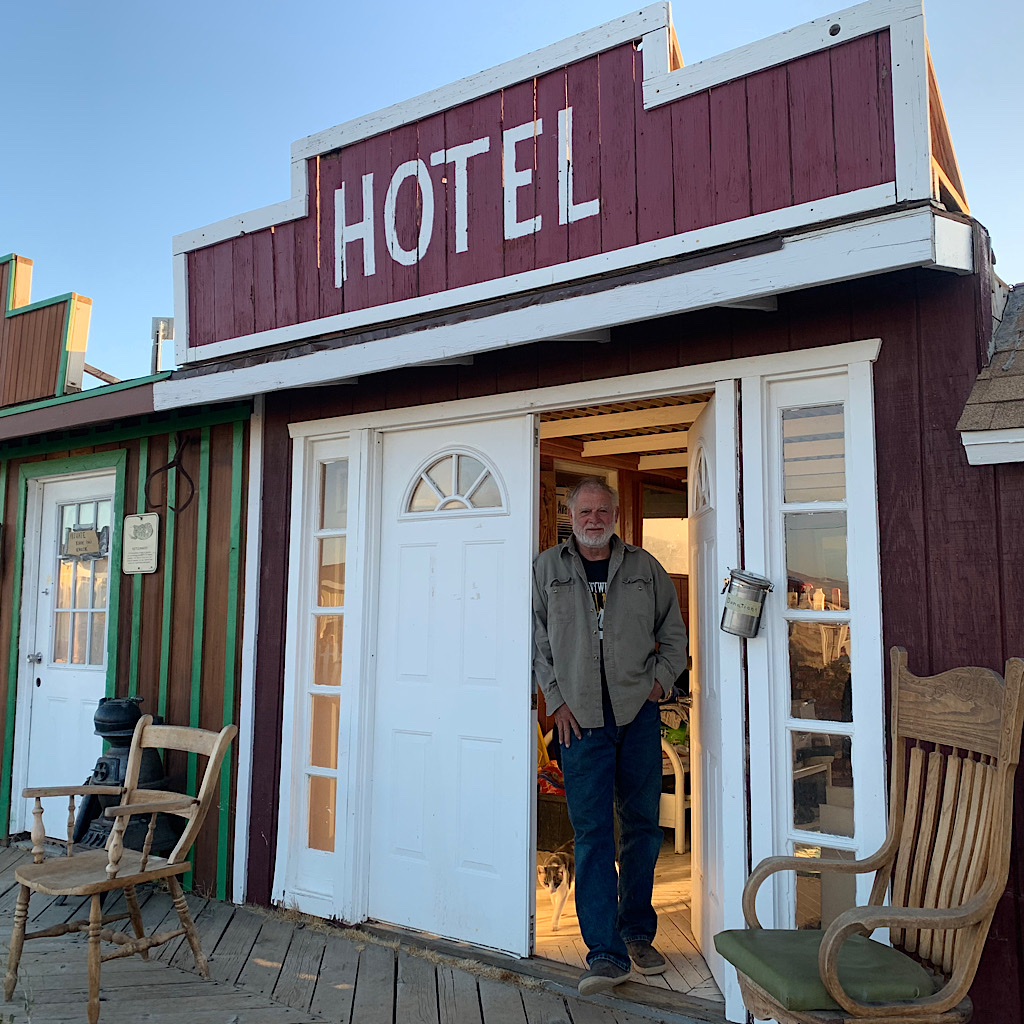 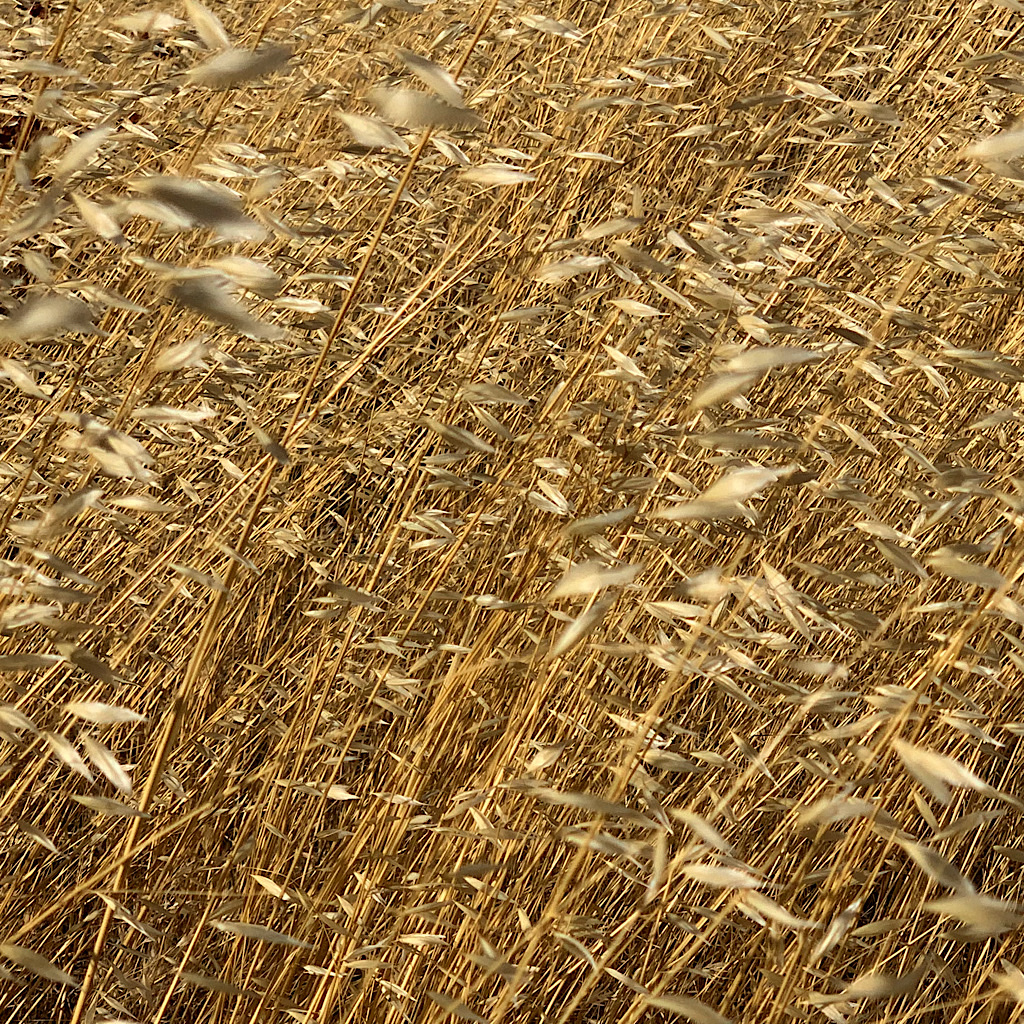 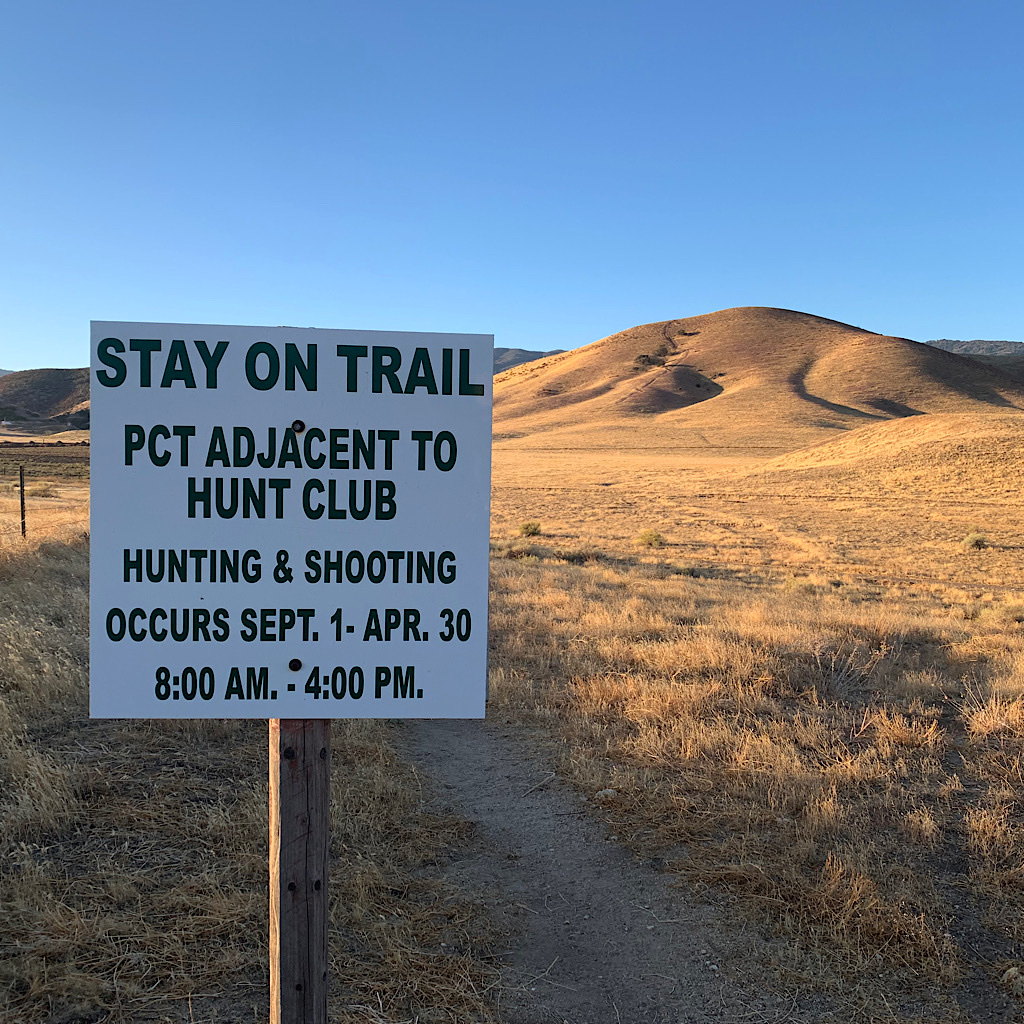 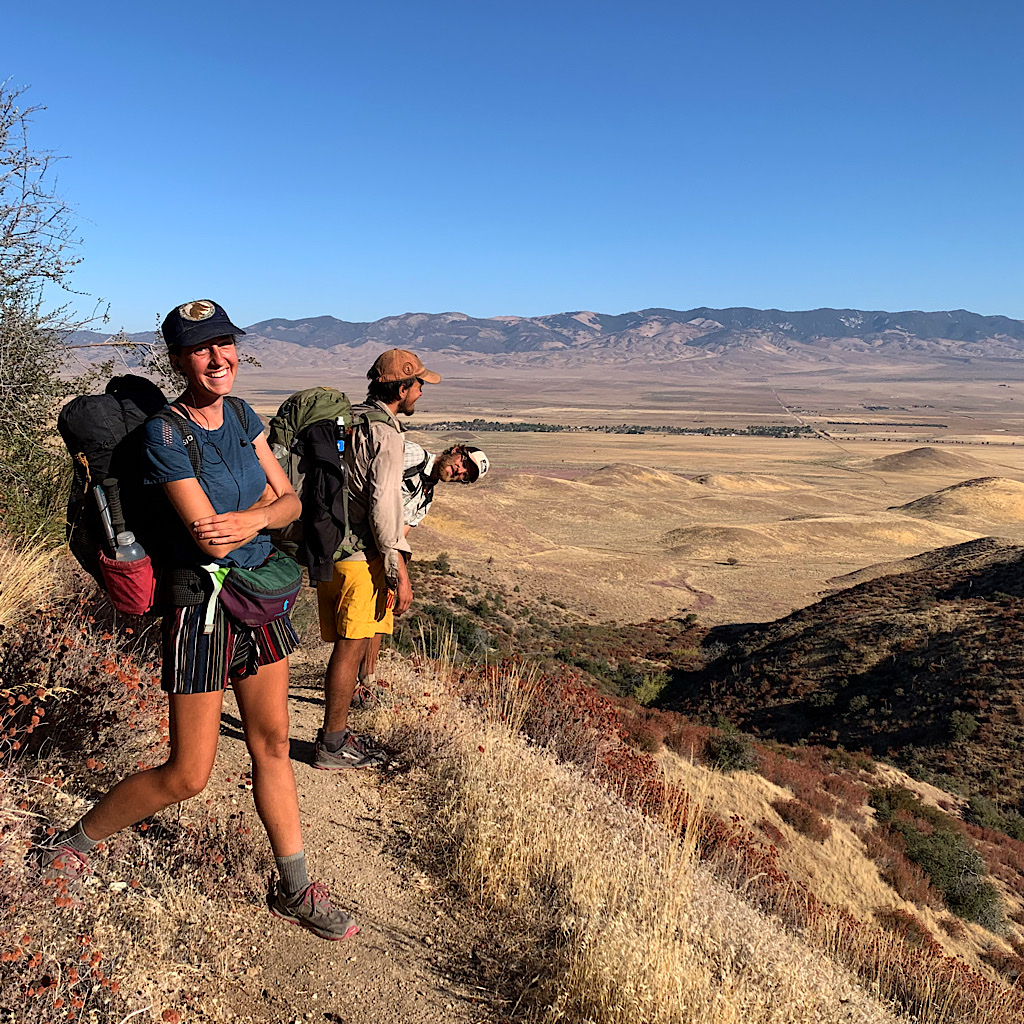 The trail crosses the highway and heads towards the hills, a sign warning we’ll parallel an active hunt club. Sheep bleat from a farm below, ‘feed’ painted in big blue letters on the buildings. Rusted vehicles sit askew in high grass. Around me is high grass with seeds of gold in the morning sun. The trail is like the scribbles I made as a little girl copying my mother’s cursive. I trace these mountains until I feel dizzy. A bird repeats a note like a bouncing ball, getting slightly faster ending in a trill. I wonder if Maurice Ravel knew this bird’s song since he has the flute do this in Daphnis and Chloe.

I meet three young hikers – ‘Sprout,’ ‘Hot Hips,’ and ‘Chick.’ They’re moving fast and I assume I won’t see them again. Hot gives me good information on water sources which always has me a bit on edge. The air is moderate and dry, so I don’t feel thirsty yet. I come to an overgrown section and am thankful for long pants and sleeves. It’s here, in this less lovely part, where the gnats find me. Not just a few, but a swarm all around my face. I come to a road and get confused about the water location, but then realize it’s at a parking lot ahead – along with the hiking trio.

Hiker Town set up this cache of a huge barrel filled with water. It’s on a palette, but they also provided a nice touch of a couple of chairs and a funky table. Sprout is cut up from the sharp plants, and as we purify the water – just to be on the safe side – she gets her first fire ant bite. 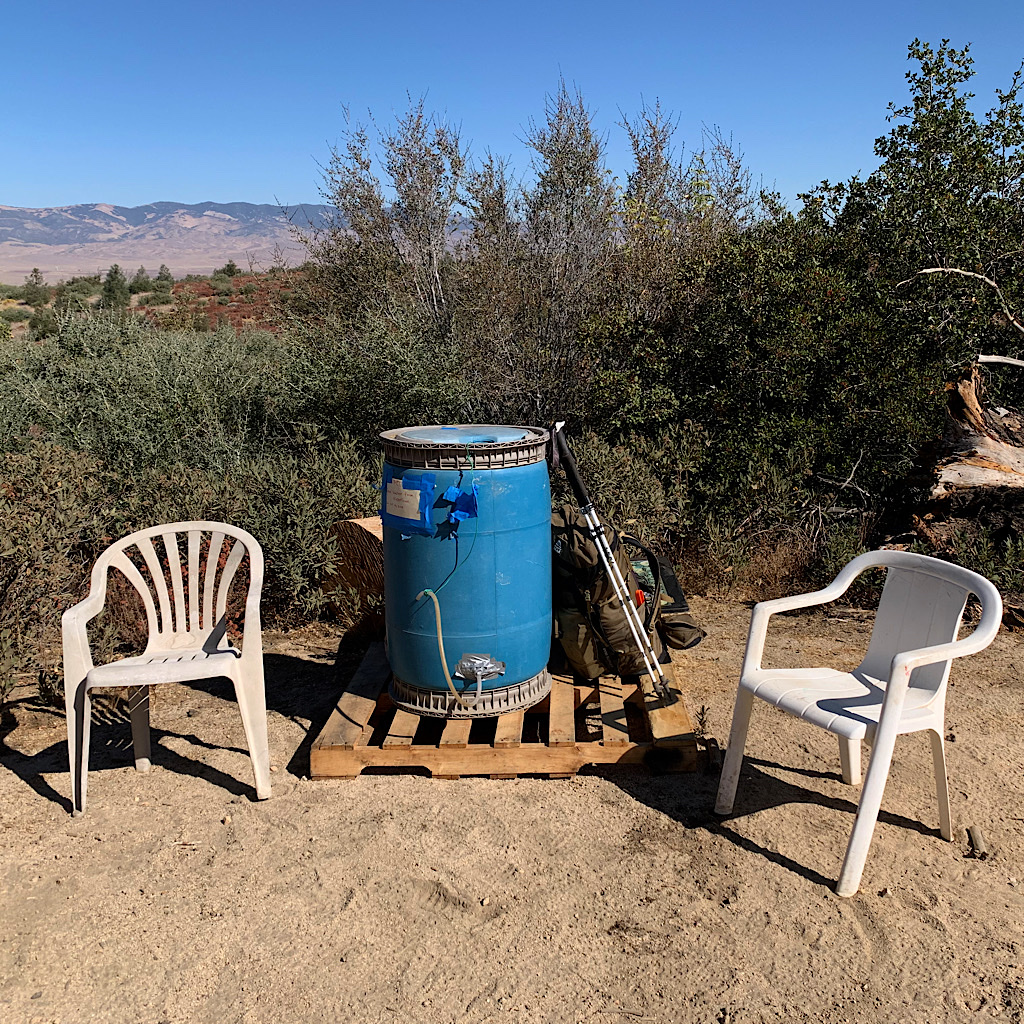 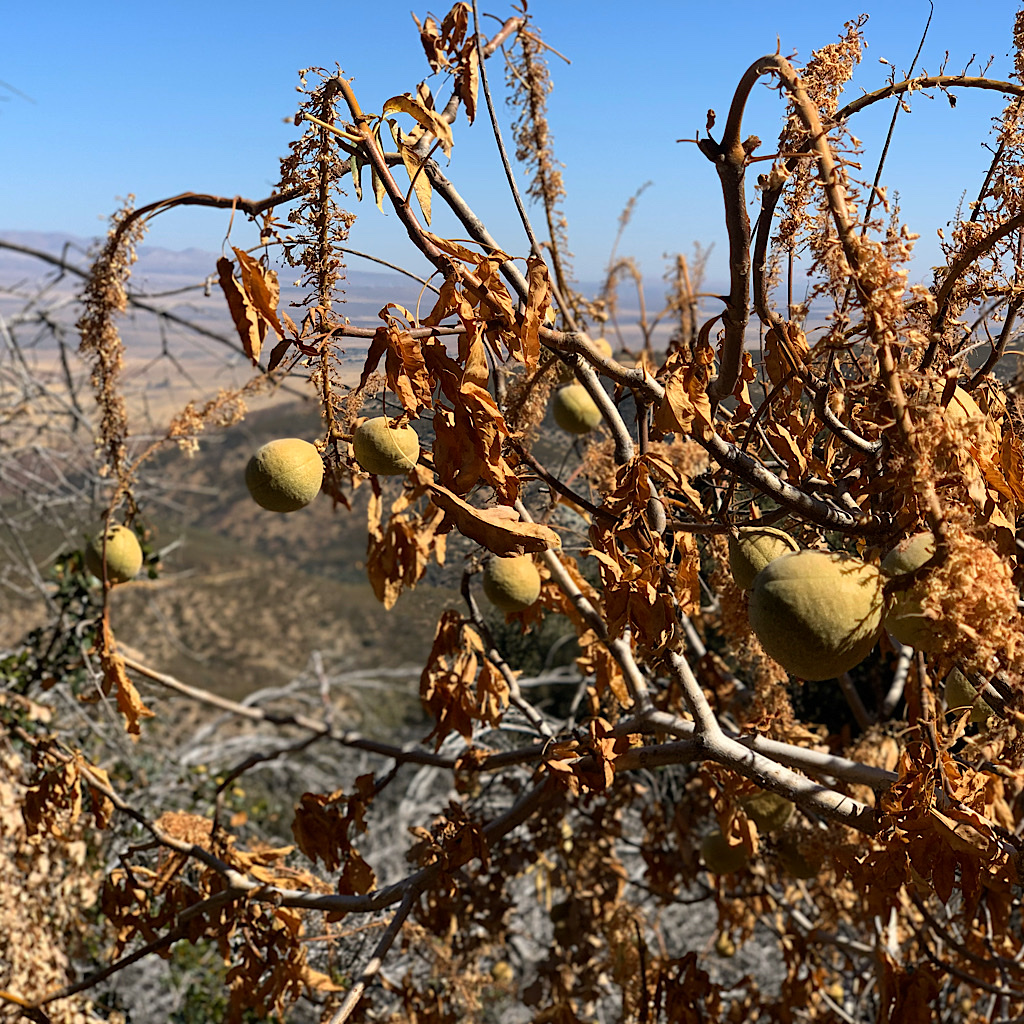 The trail now heads steeply up, but the gnats won’t let up and I breath heavily into my buff shoved up under my glasses. The gnats don’t bite, thank the goddess, but they annoy to a point where I start to completely lose it. I try to notice what’s around me – ponderosa pines with their huge and extremely sharp pine cones; giant, gnarled oak trees with leaves turning yellow; a tree with fruit hanging off it that would inspire Dr. Seuss, and the wind farm far in the distance.

But the gnats are making me insane! I start crying, but it’s really hard to hike uphill while sobbing and it makes no sense to stop, so I forge ahead as the trail leaves the soft, golden grass and oaks and heads out to the blue pine-covered mountains of the Angeles Forest. The bugs only let up when the wind blows, but it’s dense in here, like a tunnel, so the breeze never quite reaches me. I meet a hiker heading north wisely wearing a head net (mine arrives next week) and he is another manifestation of these magical moments when a person appears right when you need them.

‘John Wayne’ tells me where the good water is and where not to bother, like the place I originally planned to camp – too steep and he never found water anyway. I am overjoyed to get good information and head to the next source. Again, just when I need a hand, there are two of the hiking trio. I go first with Chick to a concrete water tank, circa WWII. There’s no getting at the water as it’s too far down a narrow opening, which happens to make a cool sound when I speak into it.

The cistern is the way to go, collected similarly to how they do it in New Zealand with a corrugated roof funneling water into a tank. Chick crouches down to get inside, then hangs over the edge to fill up his bottle with brown water – dirty, but tasty. This lovely young man takes the time to fill my bottles too, and when I stay to filter and have a snack, he wishes me a good night as they’ll camp further along. You know, it absolutely turns a lousy day of gnat swarms into a much better one. I’m really touched.

It gets me thinking about how often I search for the fault in me when people are not kind. The fact is, some people are kind and generous – treating me respectfully, engaging in conversation, laughing about the hellacious gnats, admitting the water scarcity feels like living on the edge – and other people are not all that kind or generous. I have to remind myself that both kinds exist irrespective of me, and to focus on one’s like these three. I definitely consider myself lucky because today is hard and they bolster me. 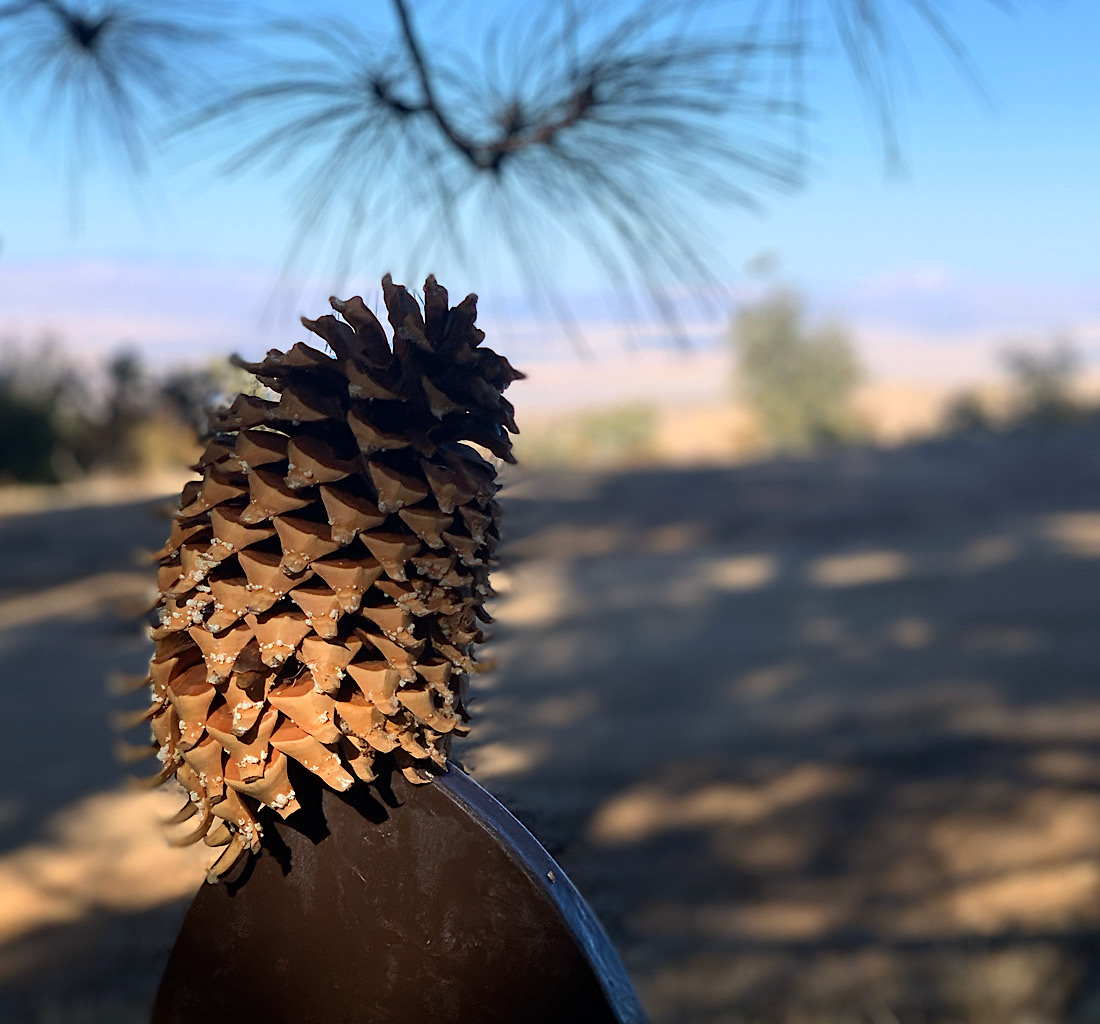 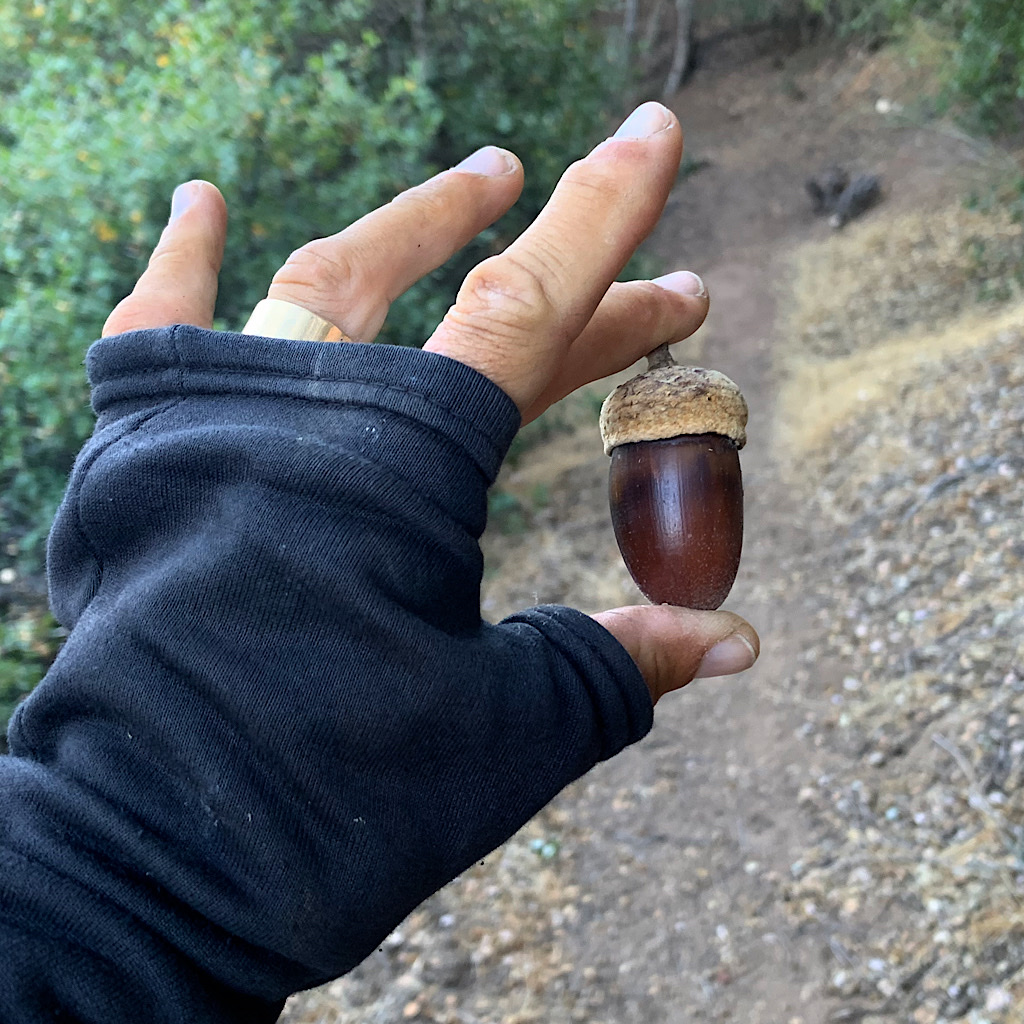 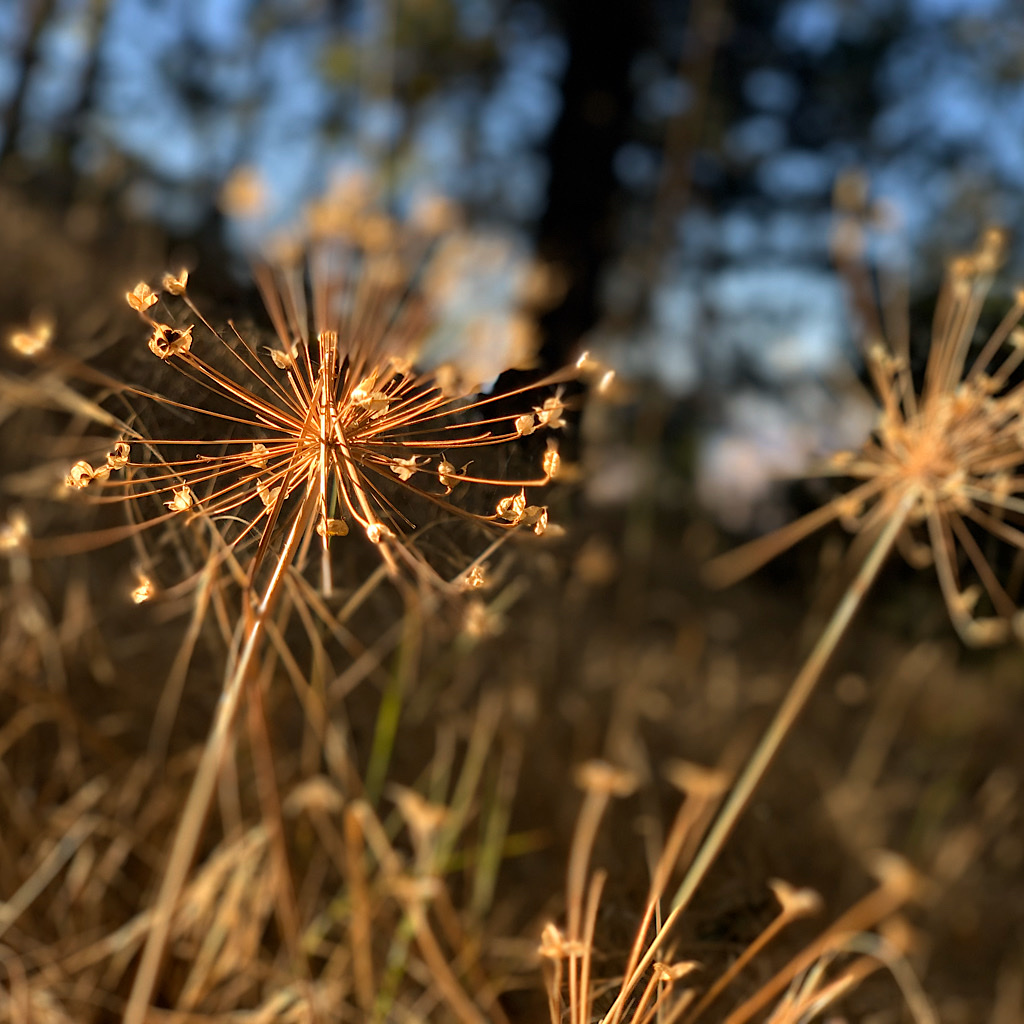 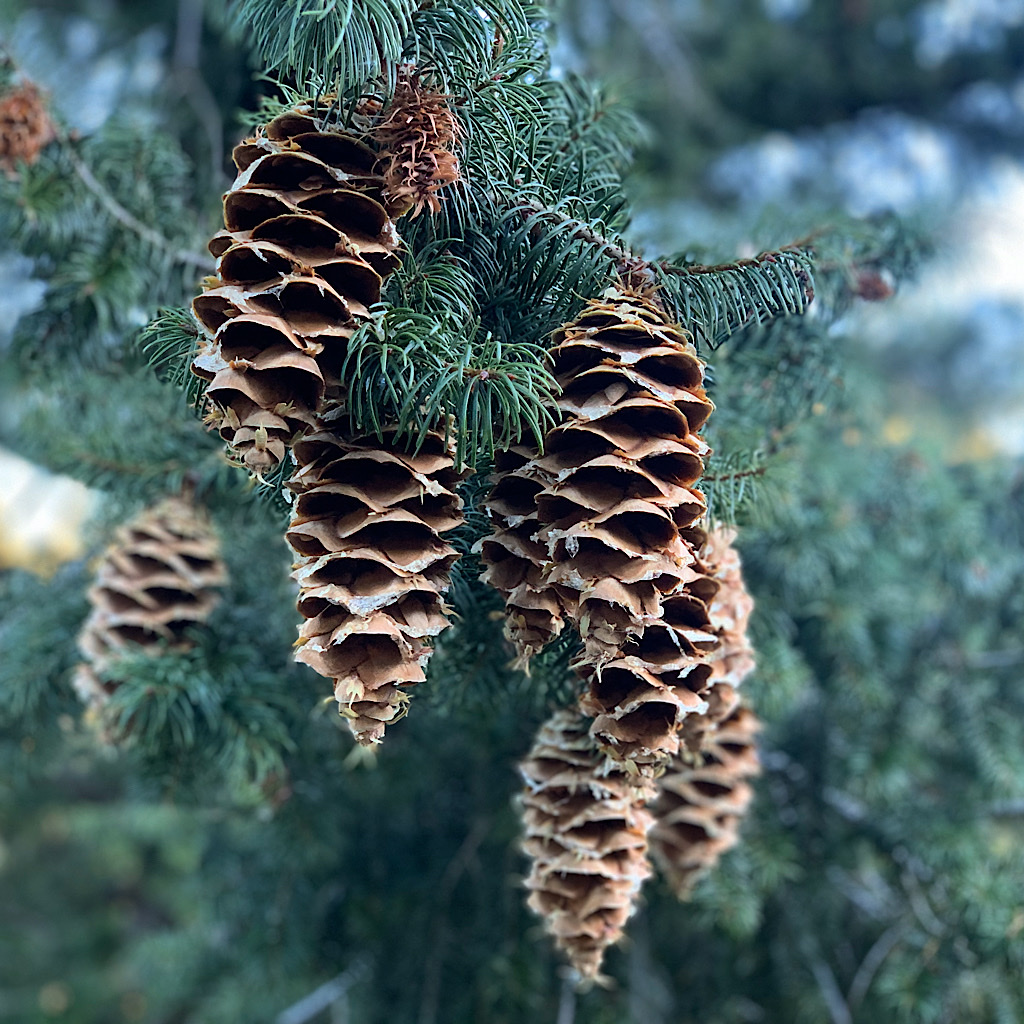 But now, they’re ahead and I most likely won’t see them again today. I move along, crossing the 500 mile mark. I’m moving due east now and almost directly north of Los Angeles. From up here, I can see down to the wind farm, the aqueduct, and the long road to town. It appears I’m going backwards and wears down my resolve a bit more. The gnats surround me and I march on doing my best to ignore them. They’re a bit like the random thoughts we often have that distract and lead us astray, down paths of worry and obsession. I’m right at my breaking point, but I laugh a little at the absurdity of today. Then I slip on acorns and it really gets me going. I’m fine, just dusty and needing to get on all fours to stand up with my backpack on, but I wonder what it would sound like explaining I had to stop hiking after wiping out on an acorn. Pretty sad.

Even having to pee has taken on a whole new dimension. I drink a gallon of more per day so pee often and when the time comes, it’s pretty urgent and I can barely get the pants down. I’m not sure if it’s the amount of water, the constant walking of a tight belt. I look pretty ridiculous and if I didn’t laugh, I’d feel ashamed. Of course, not a single hiker sees me, so who cares?!

I finally find the campsite after passing the turnoff that John Wayne told me to avoid. So glad he did because that would have been a serious climb. Here, it’s flat and deserted and I set fast before it gets dark. Just as I sit to eat, I hear someone clanging a box near the road. I yell out a hello. No answer. It bangs a bit more and frankly, I’m so tired, I figure it’s a raccoon trying to open the bear box and could care less.

Well, no, it’s not a raccoon. It’s a bear. A medium-sized black bear who comes around the corner to take a look at me. Now where’s Rob when I need him? “Noooooo, bear. No, no, no. You may not come in here, bear. NO!” After a bit of that in my deepest, most adult, stern, teacherly, scolding voice possible, he turns around and leaves.