If you’re one of those people who has that little voice in the back of her mind saying, ‘Maybe I could do [fill in the blank],’ don’t tell it to be quiet. Give it a little room to grow, and try to find an environment it can grow in. – Reese Witherspoon 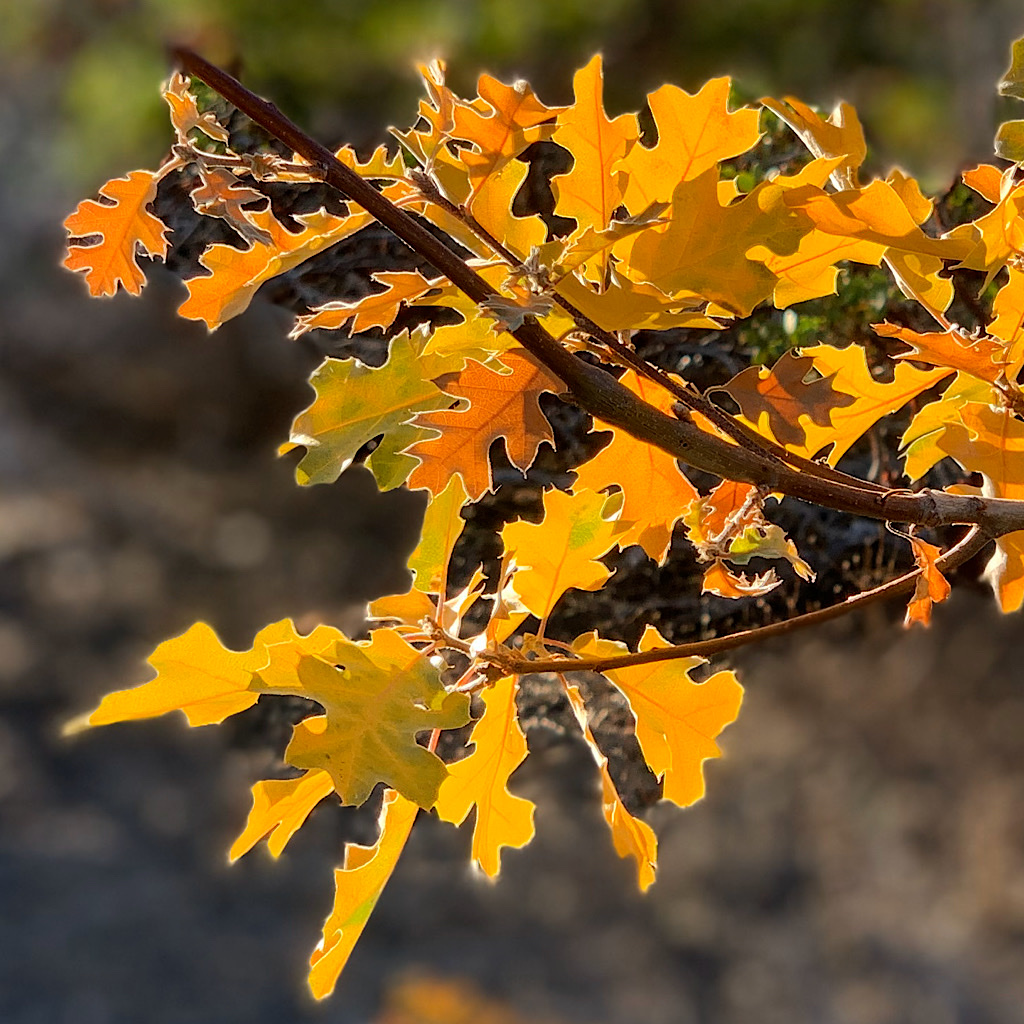 I rushed to pack up because the sunrise from my rocks was superb, a deep reddish-orange accented by a few frilly clouds. It’s cold and my hands are cupped around the heated pot. The lighter broke on my stove. I have a backup lighter, but I loved not having to use it. It’s inevitable things give out with how much they have to endure. My pack has lost two tightening straps and a hole is widening where I keep the water bottles. A zipper on the alicoop won’t close. And one bottle cap has pulled apart. Thankfully, so far, that’s it. Even I’m holding together!

It really is cold this morning as funky stones and views give way to ponderosa pine forest and a trail of needles and cones with sharp points. I hear Prokofiev ‘Romeo and Juliet’ as I walk through this unexpected terrain that feels intimate somehow, as it goes up and down, following dry creek beds and ravines. Soon, oak join the flora in fall dress of bright yellow leaves. The color is so intense, lit by the sun it has a stained glass window effect, almost coloring the very air. 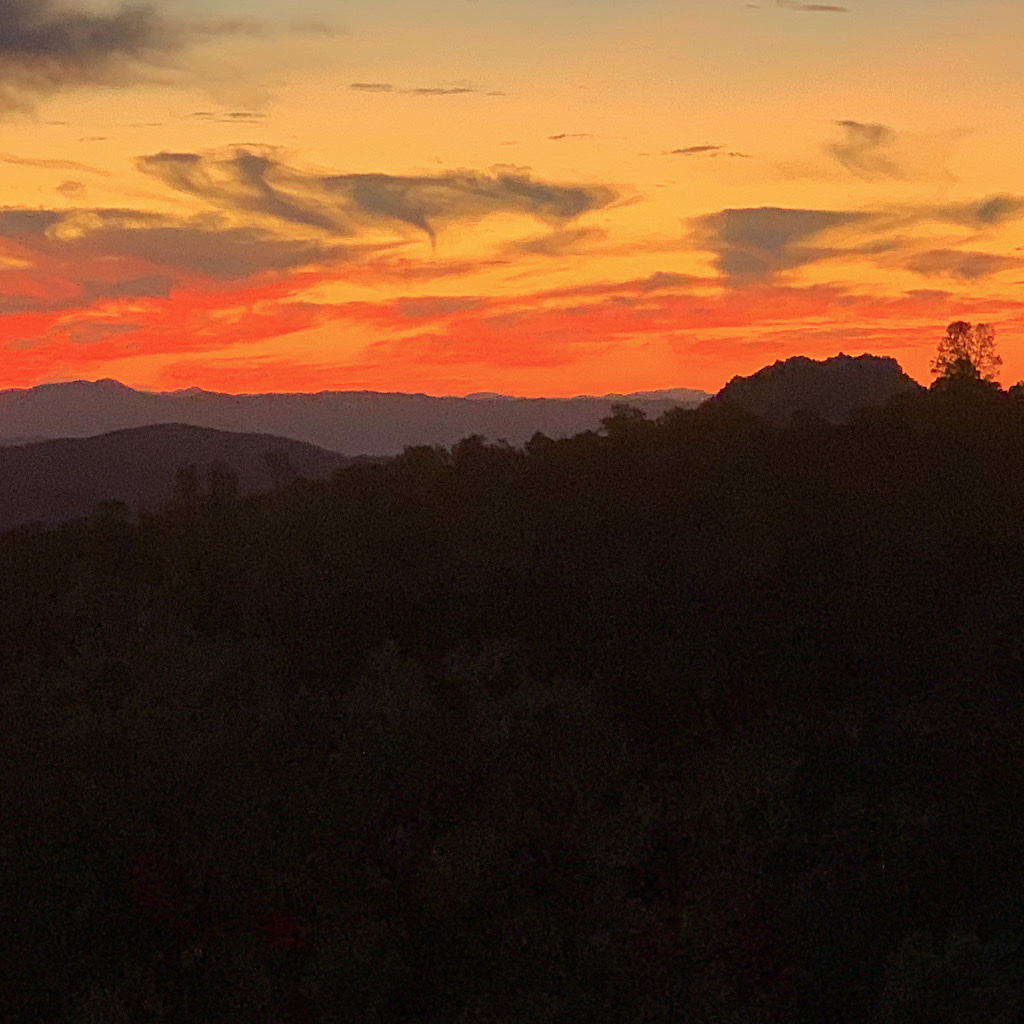 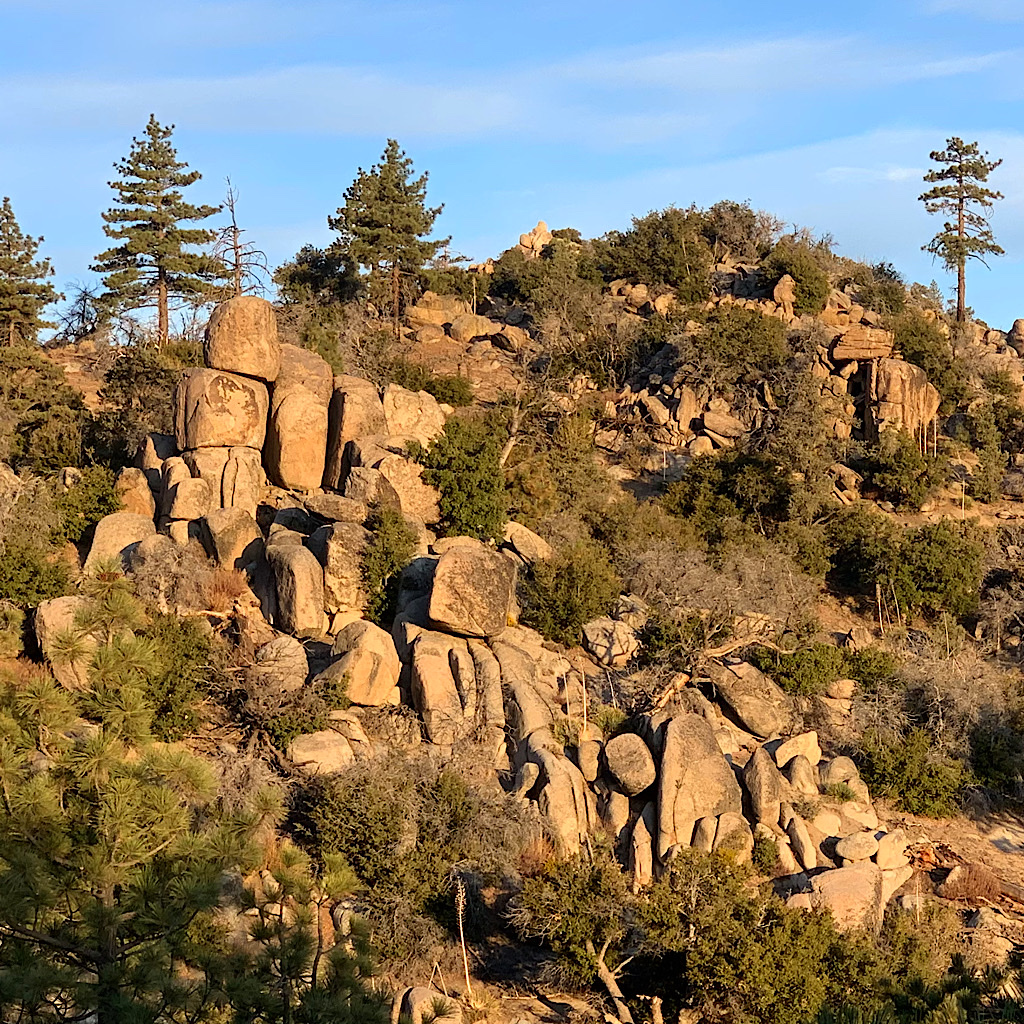 I come up steeply and spill above a deep notch that faces out to the desert. I don’t go in, rather sidling it, then up and over to a sort of pass taking me down to a dirt road that leads to a spring. It’s early, but this is the last water for eighteen miles. I decide to have an early lunch and tank up. The water source is fenced in to keep the cows from mucking it up. I see plenty of evidence they’ve been here, but not one is milling around as I arrive. It’s deserted except for a single black flipflop hooked on a downed fence post. The pipe to a trough is busted, but someone cleverly used one of the long trail signs to channel the water for easy collection.

I filter two liters, making a double noodle soup and adding the olive oil Sandy gave me to help fatten me up. I add electrolytes to the other liter and drink it down with a few other items from my food bag. It’s a fairly relaxed stuffing before I filter two liters to go, my strategy to not touch them until I reach my preferred campsite fifteen miles ahead. There’s a spring another four miles after that, but I’m fairly certain I can’t get there before dark, so this is the strategy I devised.

I feel scared, though, since there is no water ahead except for what I’m carrying. I tell myself that so far, two liters has turned out to be the ideal amount in terms of weight and my need. If I’m desperate, and drink it all, the next spring is reasonably close for my morning coffee. It’s cool still and windy, so drinking two liters now should hold me for the afternoon, plus food itself helps with thirst. Carrying more would just make me tired, so I go with what I know and head out on the trail, which for now, is an extremely rutted dirt road heading downhill. 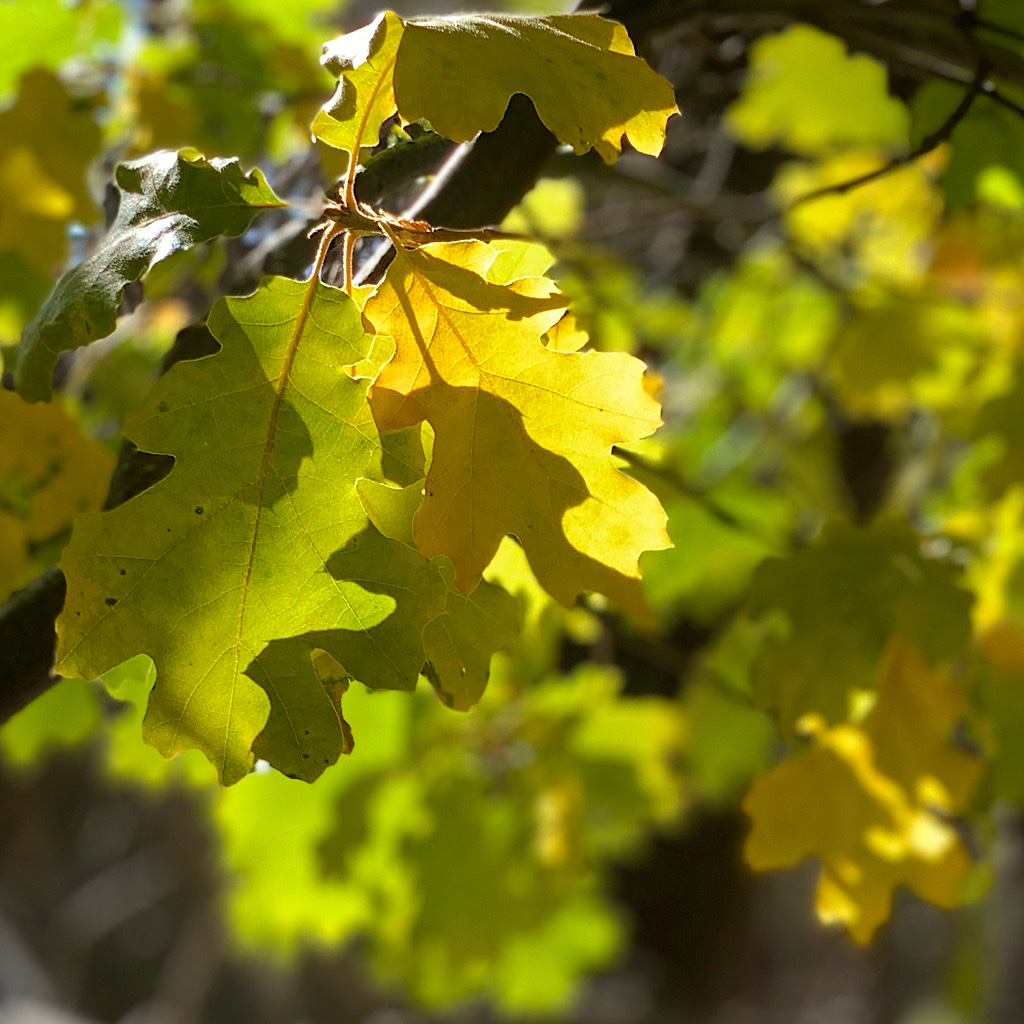 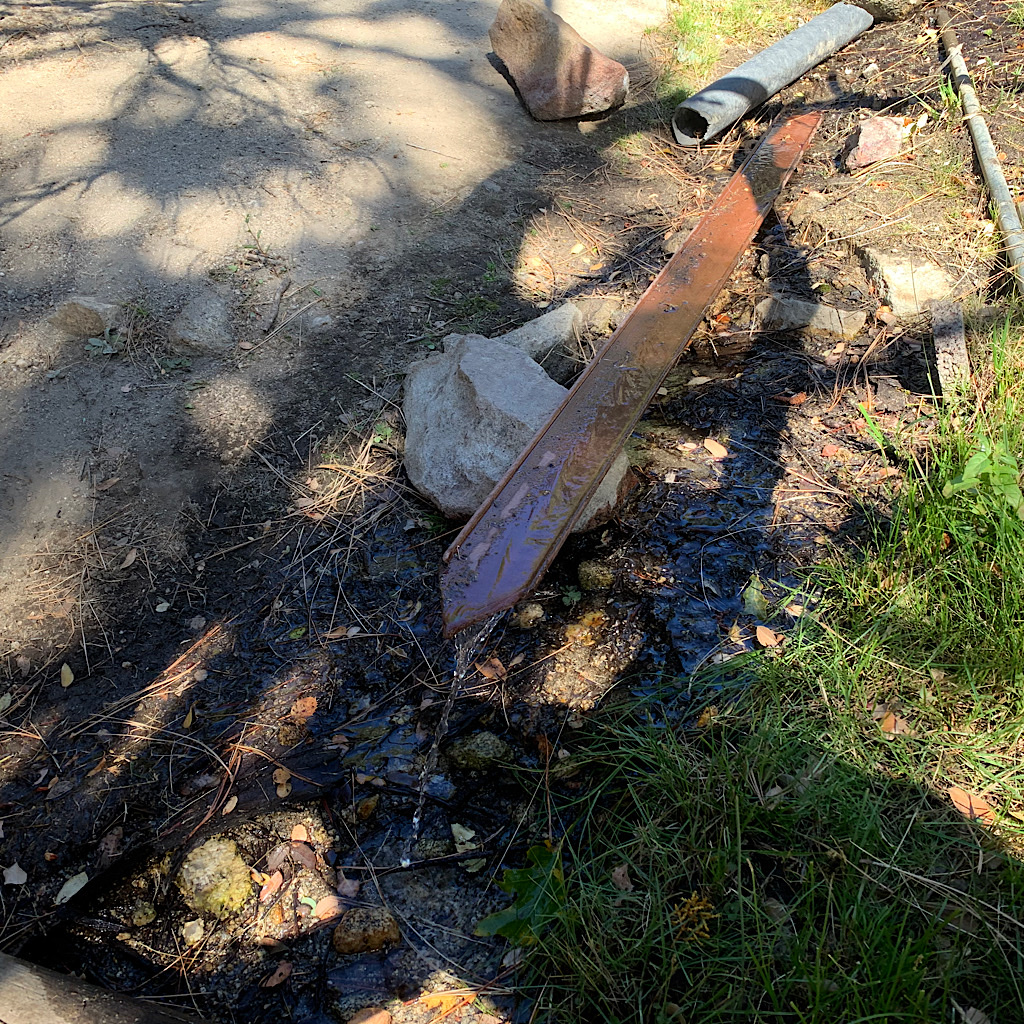 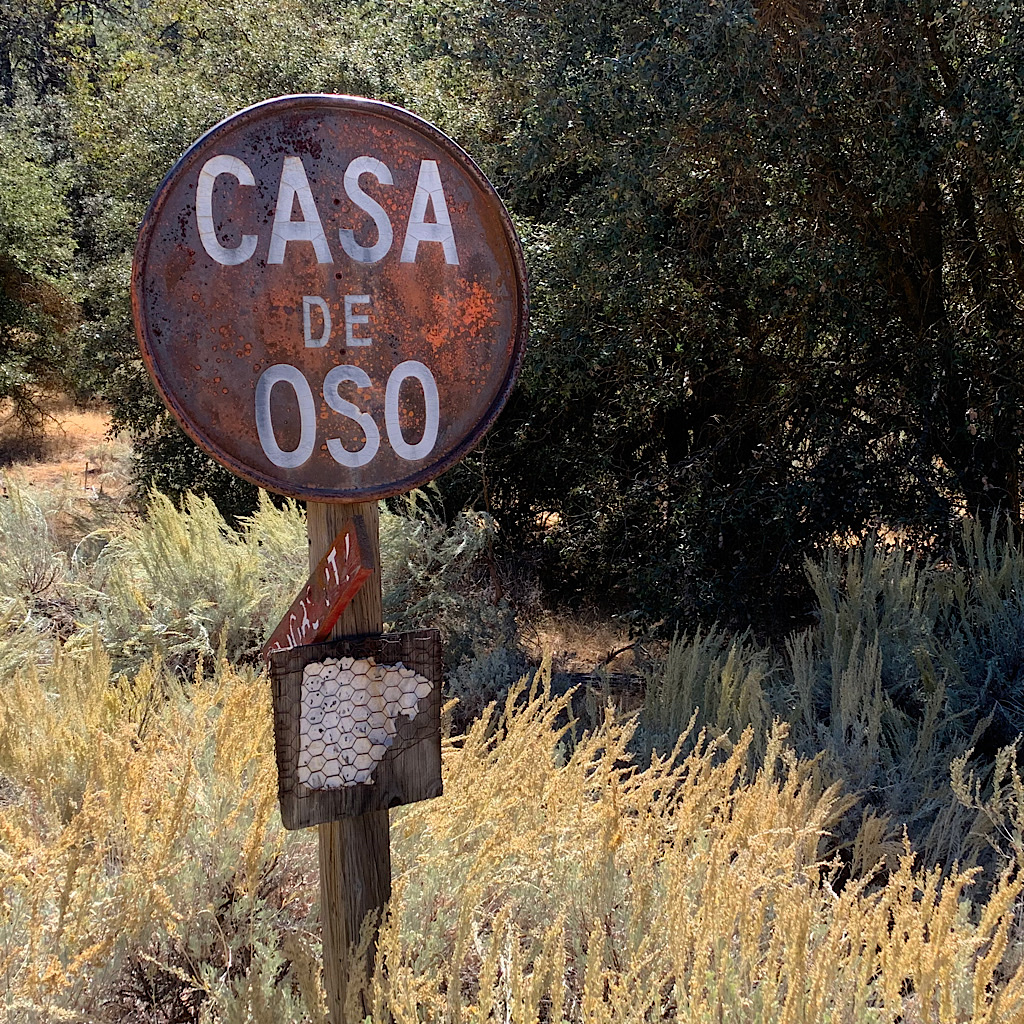 I’m mostly in shade as I find my footing in this deteriorating road. Quail emerge from the bushes, doing a contradance of diagonal crossings trying to confuse me, their crowns bobbing in time. I pass a ‘private cabin’ and my map app warns me not to bother the owners. No one appears home in this shipping container-cabin, so much like ones I saw in New Zealand, in fact, following a beat up forest road is a lot like what I did on the Te Araroa, a rare occurrence on the PCT.

The next several miles is on easement through private property, but I don’t see a soul all day as I begin to enter an area that really feels like California to me – golden hills dotted with spreading oak trees and views towards higher mountains. I leave behind the yellow oak leaves for a different variety growing tiny leaves and compensating by producing giant acorns. I slip on a few in the trail that act like ball bearings. Wild black olives are plump at eye level. Vultures’ shadows crisscross at my feet. The smell is so rich of autumn, the air a perfect temperature. Dappled light shimmers in the wind.

The trail crosses over again from west to east and I spy windmills dotting the mountains below, spinning slowly. I climb over many fallen trees and look up when I hear a crack, but it’s a limb far from where I’m standing. A German PCT hiker was killed this year when a tree fell on him. Such a sad freak accident. I enter a long flattish area where tiny yellow flowers growing along red stems cover the ground. A few dry plants have detached and grab my leg for a ride as I walk past. I come upon a complicated wind measuring device that makes a rhythmic chirp. A nearby box relates in some way to the mechanism and is, sadly, not filled with sodas for thirsty hikers. 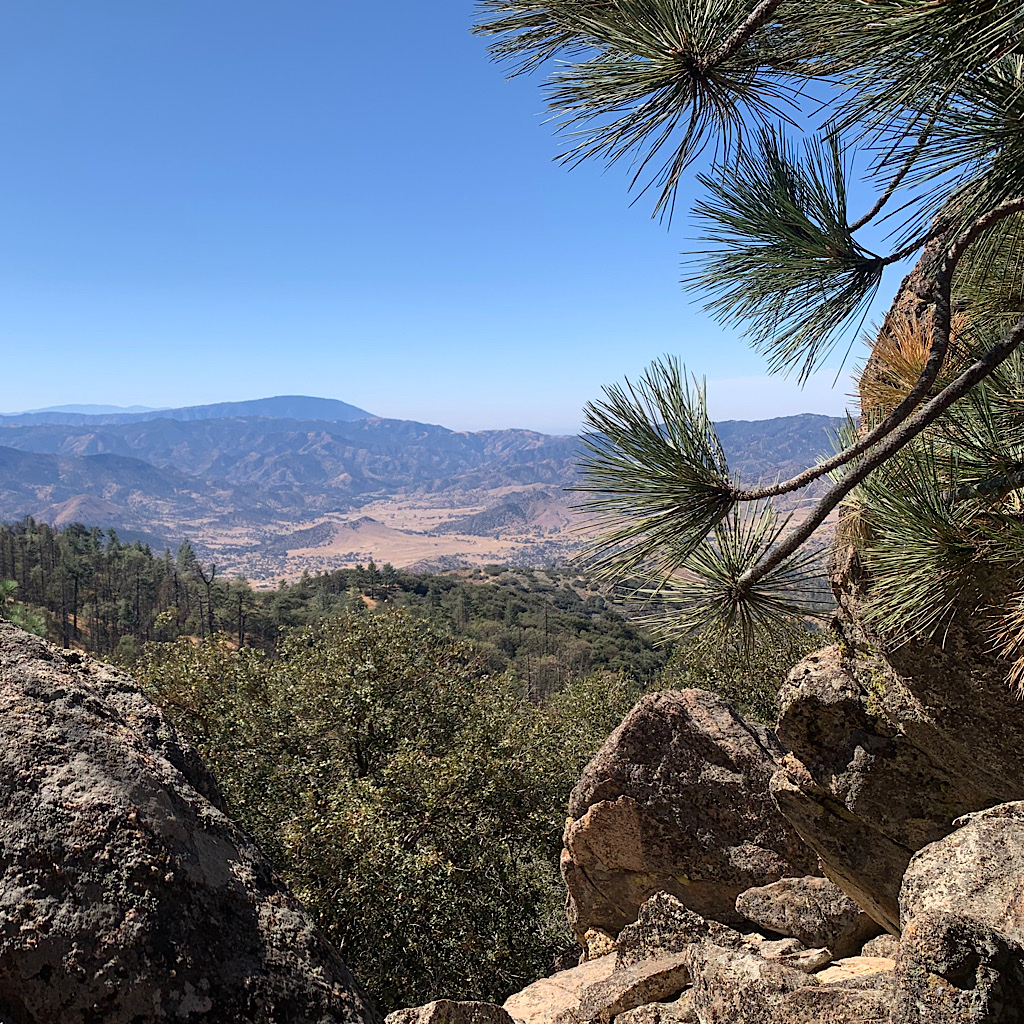 I have not seen anyone today and love being alone to experience all of this the way I choose. Perhaps I was a bit rough on Mr. Boring yesterday, after all, each of us is entitled to our opinion. But that’s what makes Bill Bryson such a great writer, especially about a long-distance hike and the people that hike it – he points out the absurdity in many of these people. I’m just happy I can enjoy my little yellow leaves and hay-colored grass and miles of ponderosa pine on this glorious autumn day and have it be enough without some twit telling me it’s boring. Perhaps it takes very little to make me smile, like these giant dried thistles that remind me of gaudy Venetian blown-glass chandeliers with flowers and baubles and curlycues. Now that doesn’t just make me smile, it makes me laugh out loud alone on this hill.

I pass the big windmills and head toward the smaller, faster windmills in a row atop a far mountain. It requires my heading steeply up, then sidling a long way around bump after bump of the mountain’s girth before entering below them. The views are splendid, but inside and under is quite tucked in, the turbines towering over me and looking like the Village People vogueing under a cerulean sky. I imagine the Koch brothers, in their zeal to eradicate any competition to oil, had their people create an issue around the sound windmills make. It’s a loud whir, more white noise than a freeway as it’s steady. There’s a constant high frequency, then a lower rhythmic sort of thud. If this is noise pollution, let’s ensure we outlaw un-muffled Harleys while we’re at it. It’s a sound that’s actually relaxing, which is good since I’ll camp beneath them. 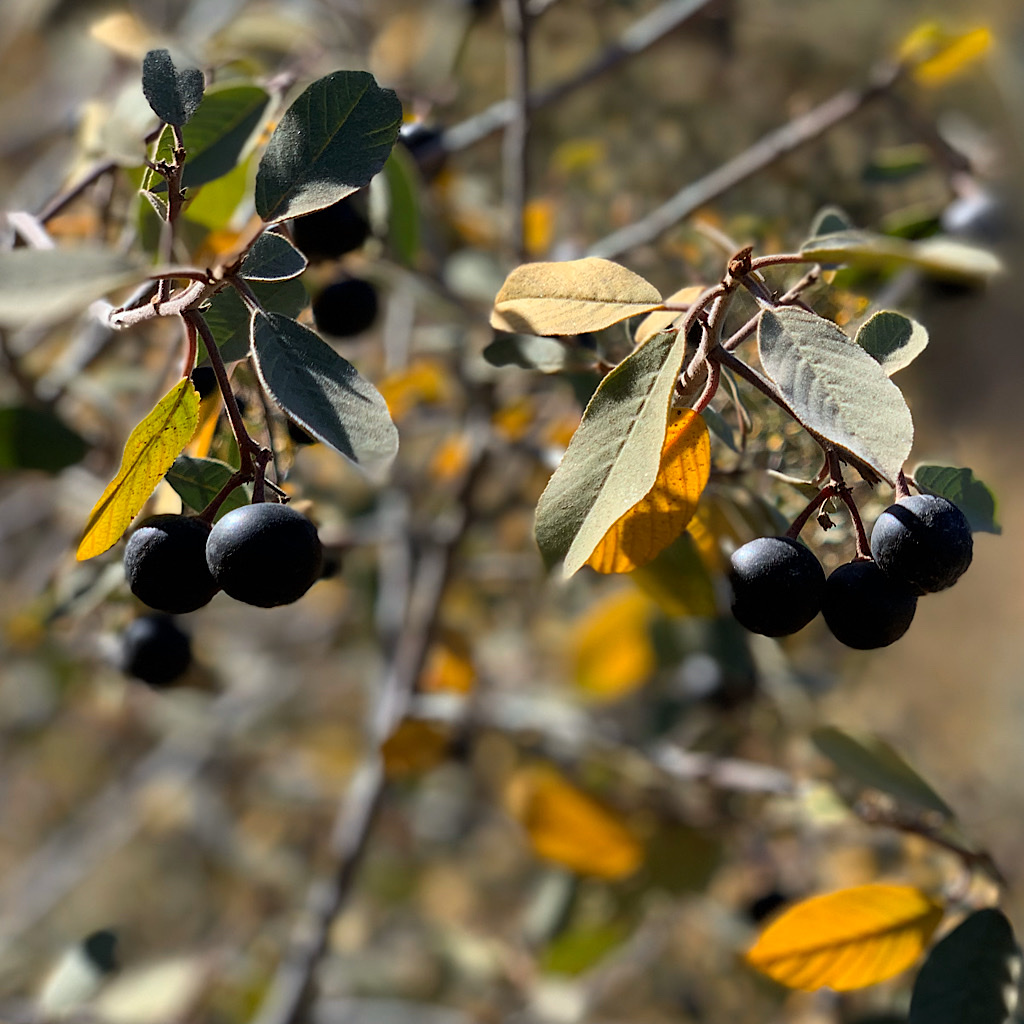 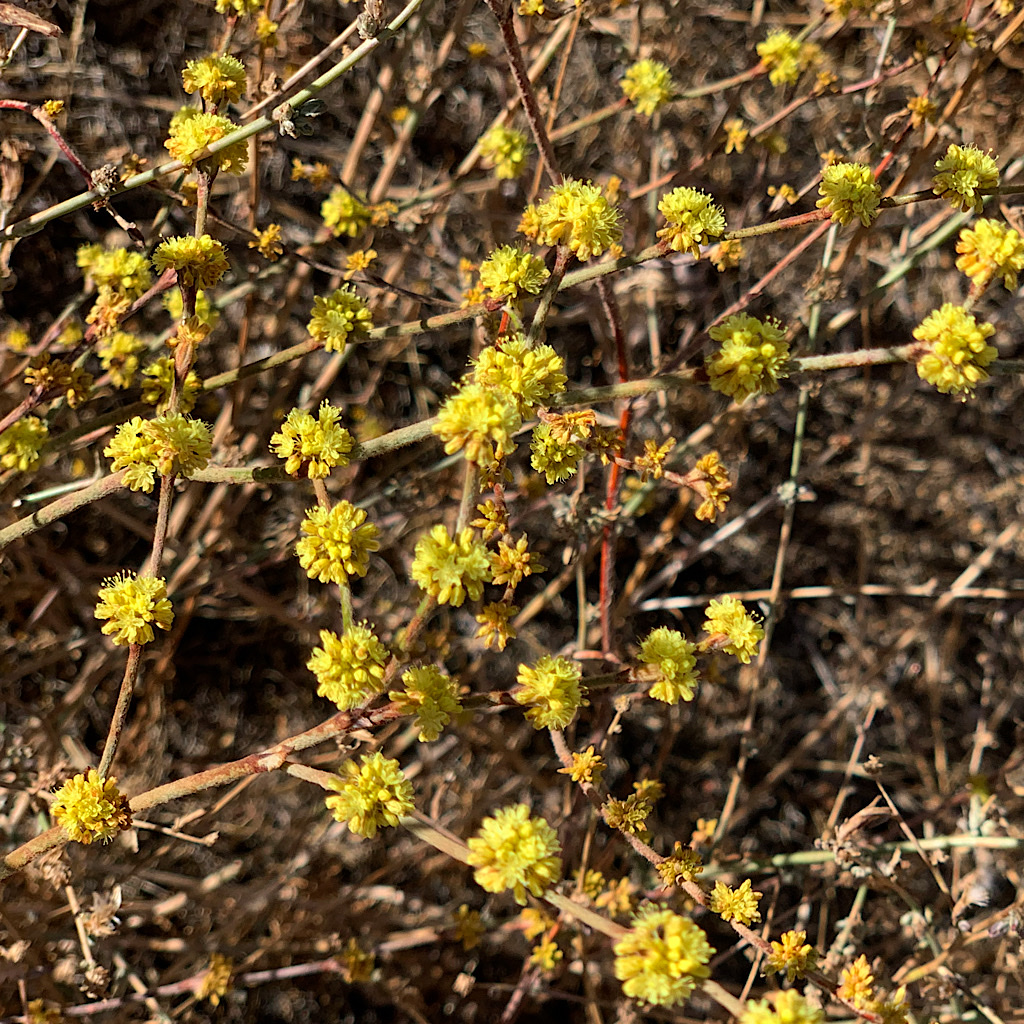 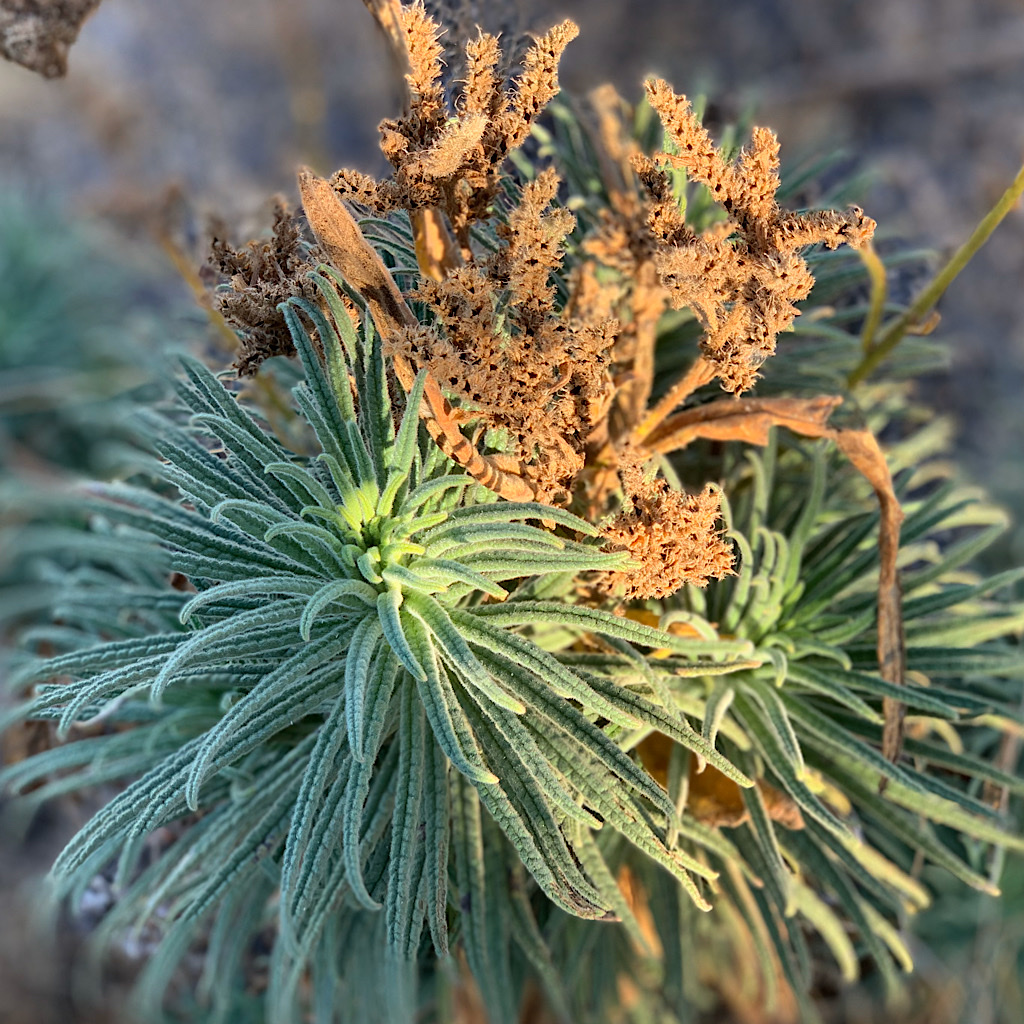 Two black cows check me out as I descend into a small canyon. Sites abound tucked into the trees and I set with a view to the big white fan blades. Just as I organize my change of clothes, I hear, “Hello! You’re Singet, right?” It’s ‘Spark’ from before the Sierra, a really nice guy who left the warmth of Kennedy Meadows North to walk the exposed Emigrant Wilderness in the dark. He made it ok, but now has lost his map and his phone died, so he wonders how far it is to Tehachapi. I tell him twenty miles but the moon is almost full, he could walk it at night. But maybe more important, I tell him where the next – and final – water source is. He’s grateful and ready to go when I ask if he can might possibly, consider sparing a little water since he’s on his way to the spring now. This lovely young man says yes, and gives me a half liter, just enough for me to feel less panicky through the night.

He heads off, but I happily remain as it gets pitch dark within a half hour – and cold – and I feel just fine doing my walking in the sunshine when I can see and enjoy everything. My steady whirr is lulling me to sleep now. I love that every day brings some surprises and this one was no different. I’m proud I made a plan and followed it and I’m excited to have a windmill night in the books. Spark made my day, and I think I helped his night. Til tomorrow, sweet dreams. 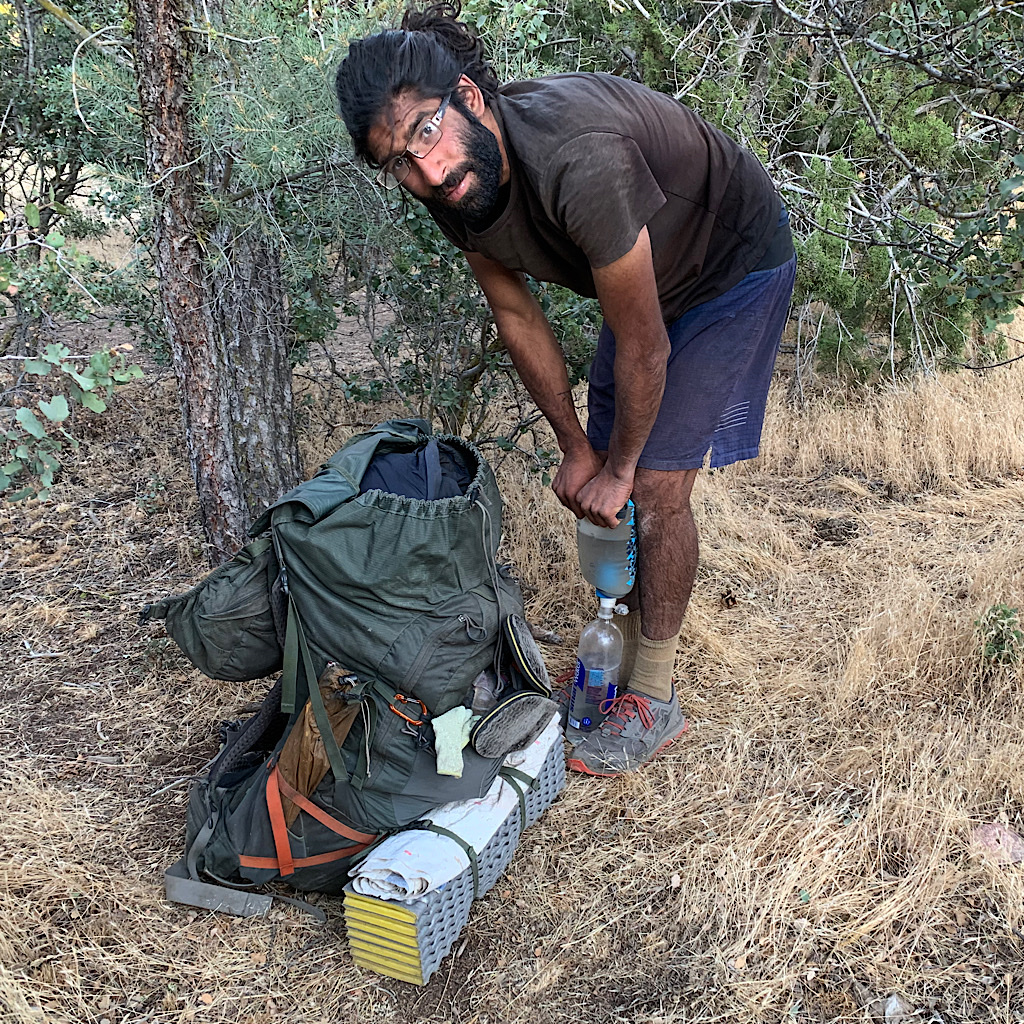