The way I see it, if you want the rainbow, you gotta put up with the rain! – Dolly Parton I wake earlier than normal and it’s not all that cold, which I like. I only wear my rain jacket to start. Bear Box comes over to chat while I eat, telling me she has an interview to be a flight attendant. She also made a total change to her wardrobe after all the cold in the Sierra, though I think now things will be getting hot – at least in the day – so there’s not much need for hand warmers. She shows me where to get water – and how to avoid the very healthy poison oak. A guy who calls himself ‘Number Seven’ is camped right next to the spring. I joke about his choosing the prime camp spot, and he complains about not finding flat spots anywhere so late at night. I say, “Seven is a better number than two.” But he doesn’t laugh. Some of these PCT hikers take themselves so seriously. 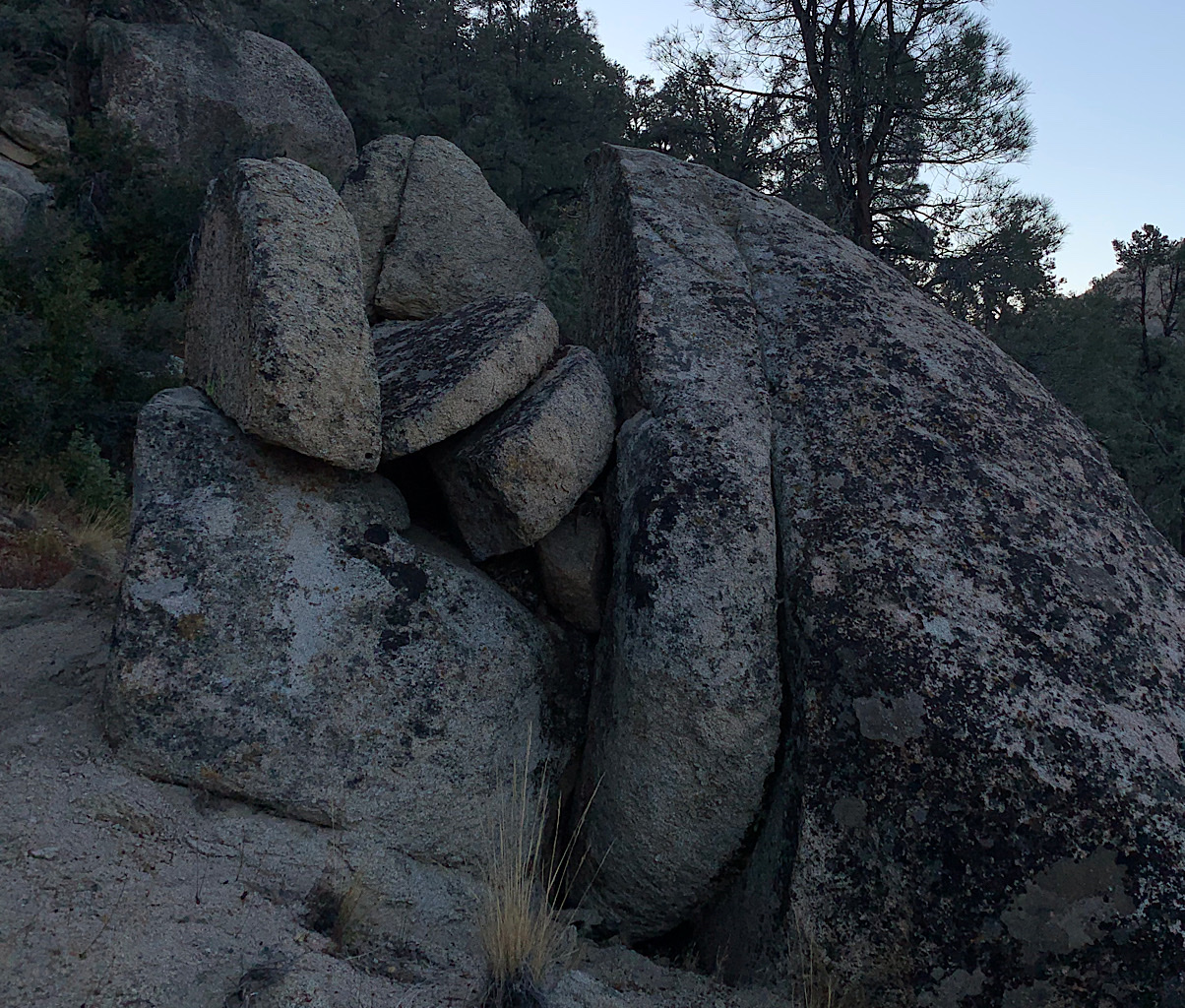 The trail goes up right away into a rock jungle, erratics in all shapes follow me along as I look out to jagged peaks above a beautiful meadow. There’s a house nestled in that valley. Ahead is a hiker and I see it’s Michelle from day one! I haven’t seen her since Washington. She calls herself ‘High Feet’ now and skipped most of the Sierra because of the cold. In fact, she’s just about had it with the trail, especially when her tent pole snapped and later, the shock cord gave out. But, boy can she hike, flying up this steep trail telling me all her woes. I can’t keep up, and need to change into my sunny gear, so tell her I’ll catch up. There’s not too many miles left to Mexico, so I hope she stays the course.

Acorns in green and black litter the trail. A fat, black lizard skitters to a rock and does a few pushups. Behind me are row upon row of mountains, high, dry and daunting. I keep moving up to a saddle looking out to the desert and catch Michelle calling the tent makers. I carried a liter of water and plan to drink it but I’m inundated with gnats. Gno, gnot gnats!! I sent my bug net home assuming fall would see the end of them. Thru-hiker lesson – never assume anything!

They land in my eyes, my nose, my mouth. They buzz my ears and hover as if on tiny gnat-sized bungee cords right at eye level. I use my buff to ward them away, so they land on my sun glasses. The only saving grace is that these gnats don’t bite. I guess they just drink my sweat and tears, but never sting or extract. 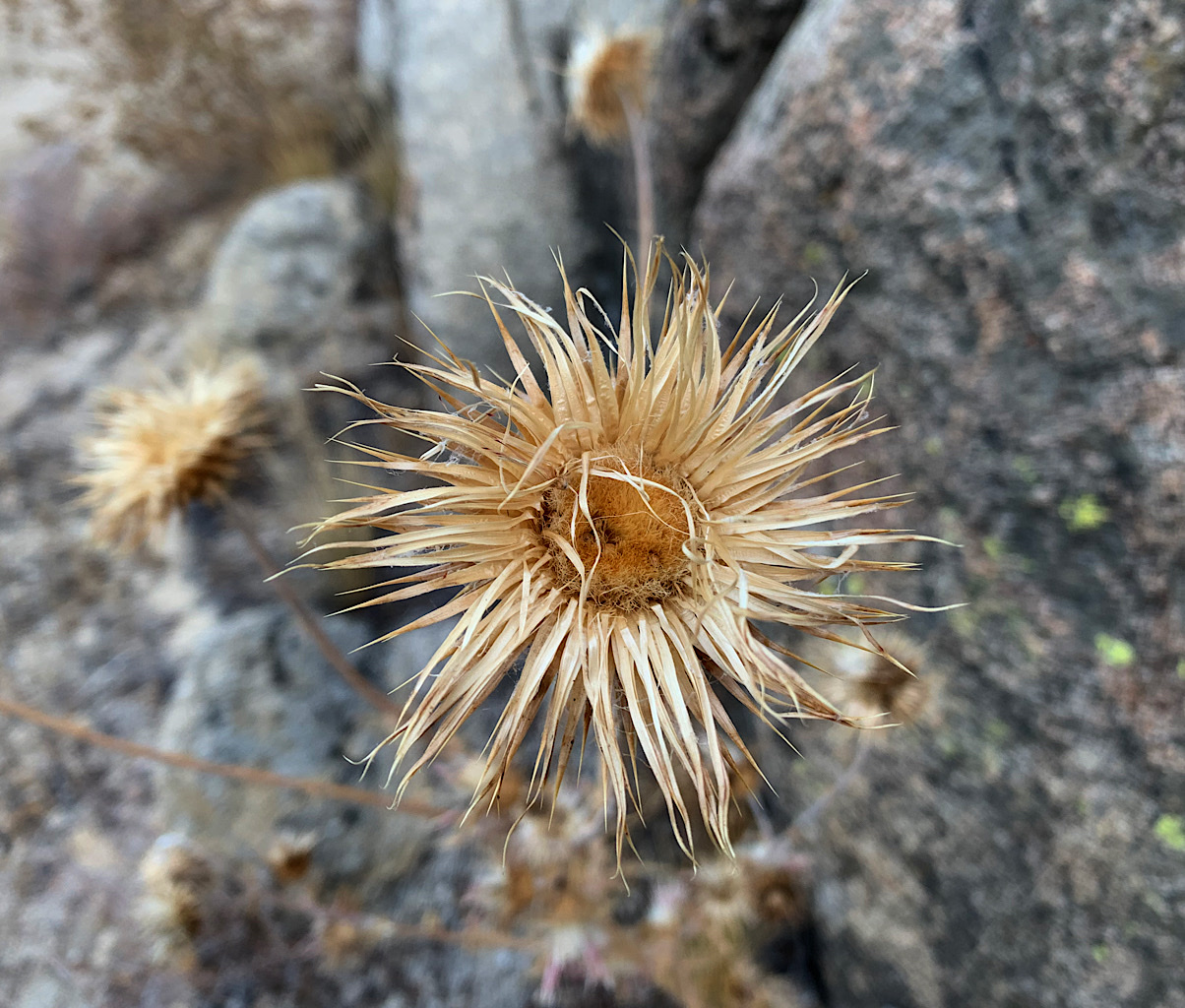 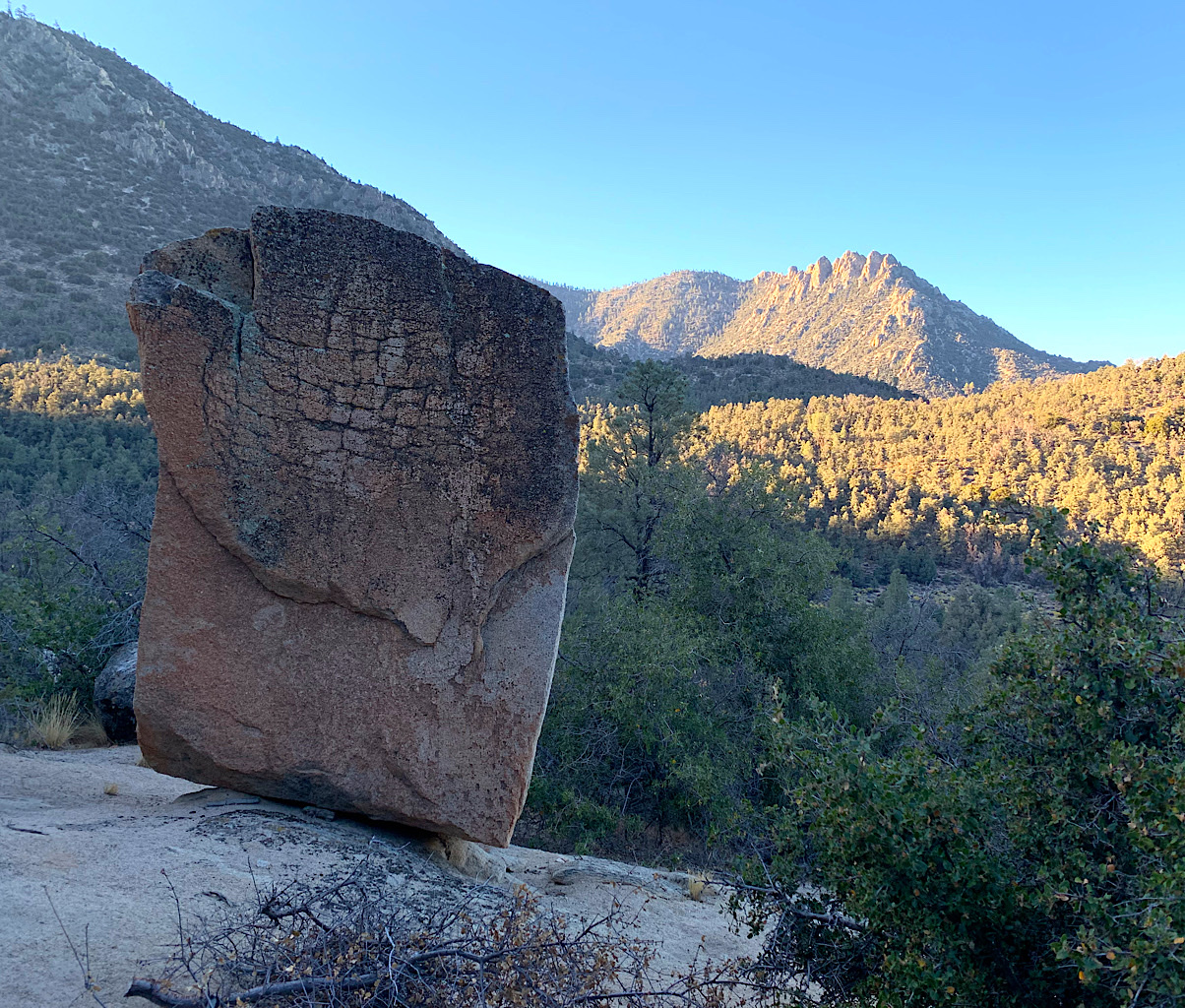 That’s not to say they aren’t annoying as I begin heading down a balcony walk deep into a fold in the mountains promising another water source at Spanish Needle Creek. I catch up with Fluffy and Flawless, eating chips. I realize I am hungry and not certain I brought enough food to make it all the way to Tehachapi, over 100 miles from here. I fill a bottle at the creek, then head right back up, planning to eat lunch at the top.

The mileage isn’t so high to the top of this rise, it’s the steepness that gets me. At first, it’s a fairly steady rise, but then, rock outcroppings need to be avoided, so the trail goes straight up. A few switchbacks, a couple more straight ups and I am jacked up high above my canyon – and even higher than a little road that emerges from a valley with a few buildings. It’s aerie-feeling here since the trail is completely open to the view, and again, I’m surprised that there’s even a path up here, hidden in the folds of the mountain.

I spy Joshua Trees at the top, a plant in the Yucca family – not a tree at all, really – with branches stretched out as though offering a blessing and named for a prophet. Not all look so grand, some get overgrown and appear more like a many-headed and many-armed wall of a creature. I head down some into this magnificent valley which is more of a meeting place of many mountains. My lunch of meat and cheese gives me some energy, though I really want to eat it all and not ration for later. I don’t come all the way down, rather I thread a saddle and enter a sort of hanging valley of Joshua Trees that stretches up toward very high and intimidating mountains. 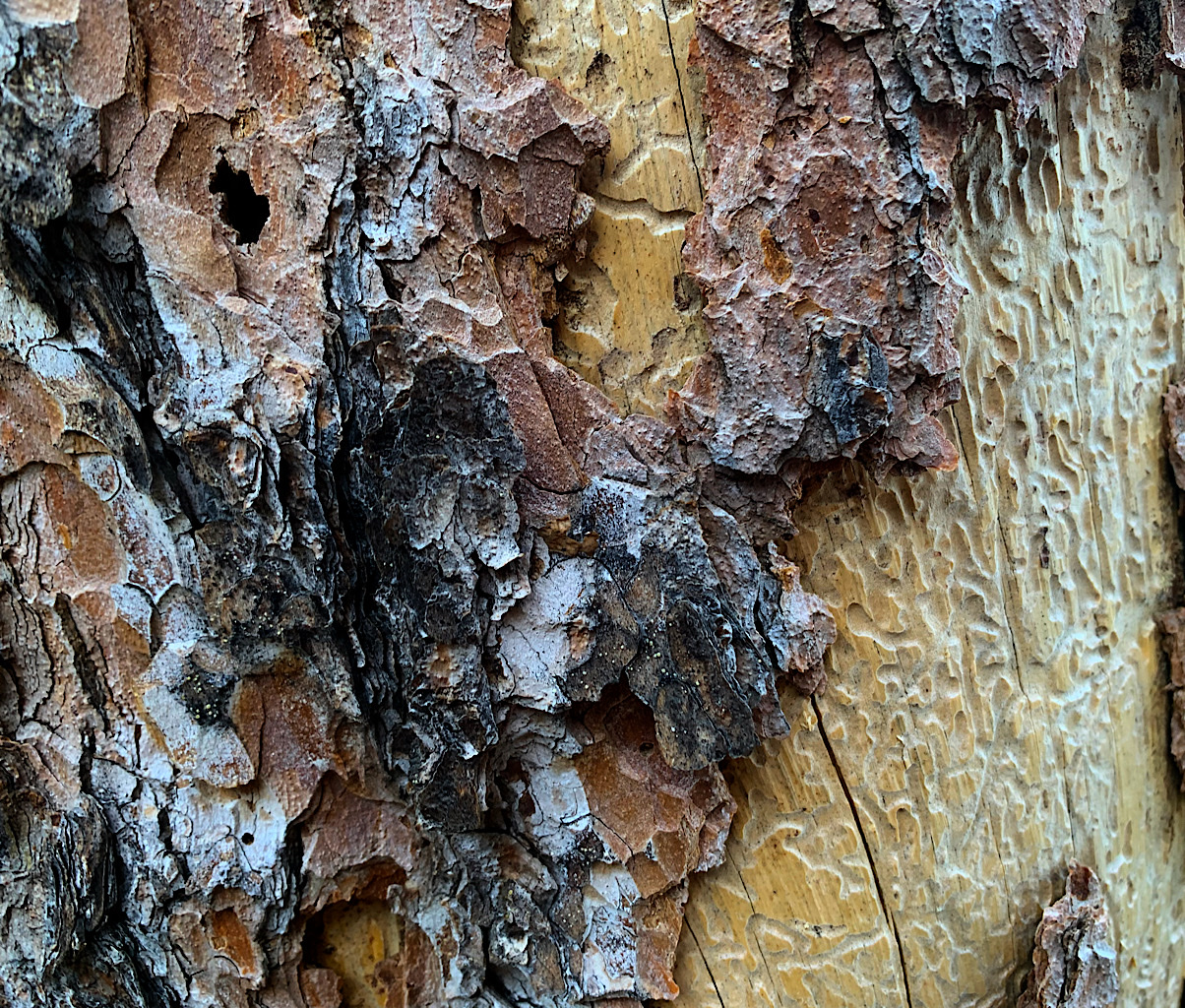 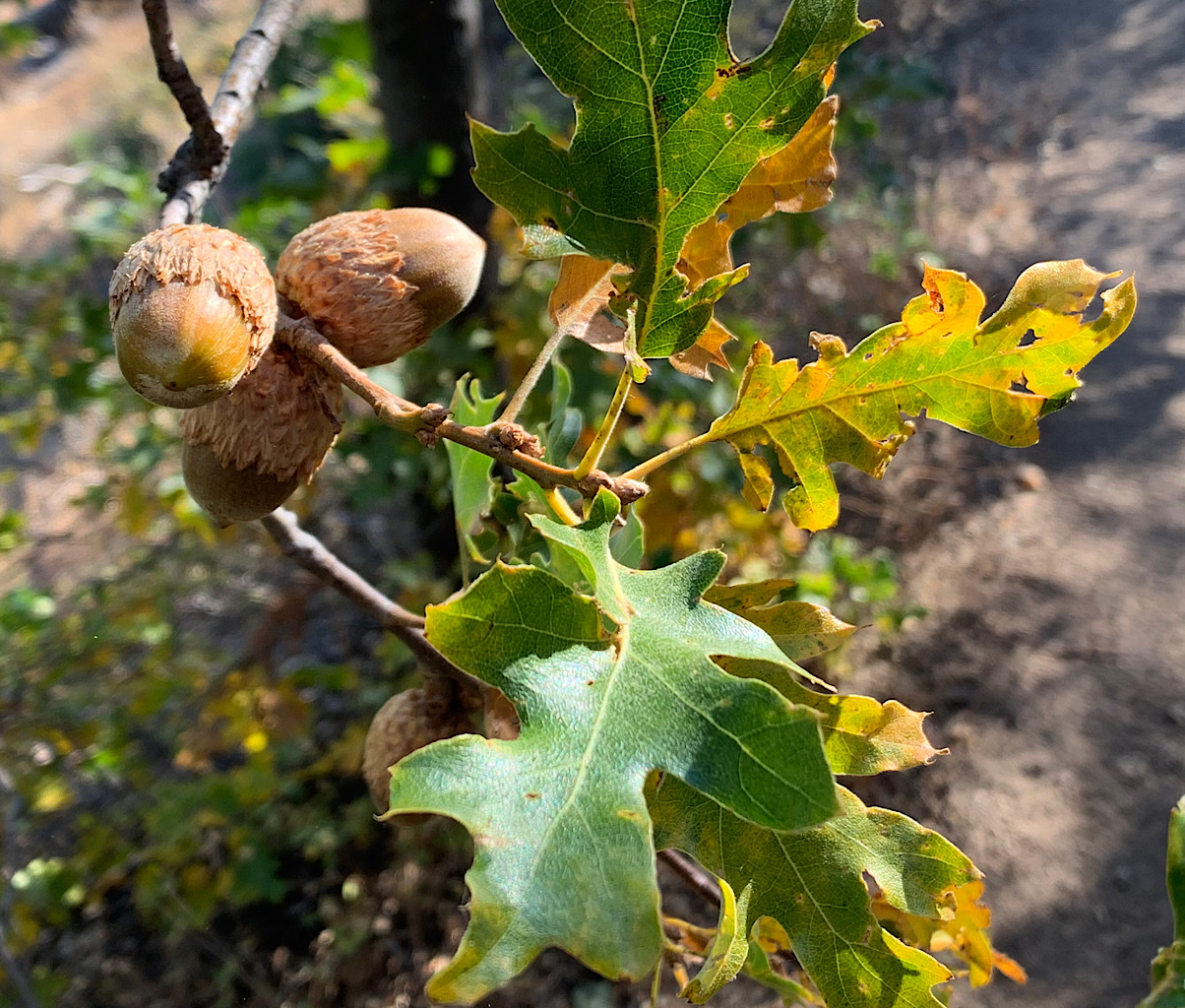 There’s a spring here with the final water for thirteen miles. I’ll need to carry all I’ll need for this afternoon, tonight and tomorrow morning up over 2,000 feet. I try not to focus on how tired I feel or how nervous I am, uncertain I can manage. My app tells me water is flowing, but I’m uncertain where, so follow the sign pointing down 1/4 mile to a spring. It’s funneled into a trough and easy to collect. I’m swarmed by gnats, but take the time to drink a liter and filter two to carry. I feel like a packhorse slowly grinding up that 1/4 mile to the trail to begin the biggest ascent of the day.

Ahead are Flawless and Michelle where the water crosses the trail. I feel like a dope going down to the spring, but Flawless tells me the water tastes bad up here so I guess it was worth the extra work. Michelle passes me nearly right away as I go into low gear and slowly power up. The mountains are covered in trees and it’s anyone’s guess how the trail will go up this, but it reveals itself slowly and answers my query – very steeply.

The views out to where I walked into this mountain maze, are stunning. Skeletal tree carcasses frame the peaks as dust settles in the air causing a bit of haze. Up and up, around, across, up more and even more, my breathing staying exactly in rhythm. I might be allergic to some plant as my nose tingles and I feel a bit lightheaded, continually coaxing myself to stay on trail since my heavy pack wants to swing me off. 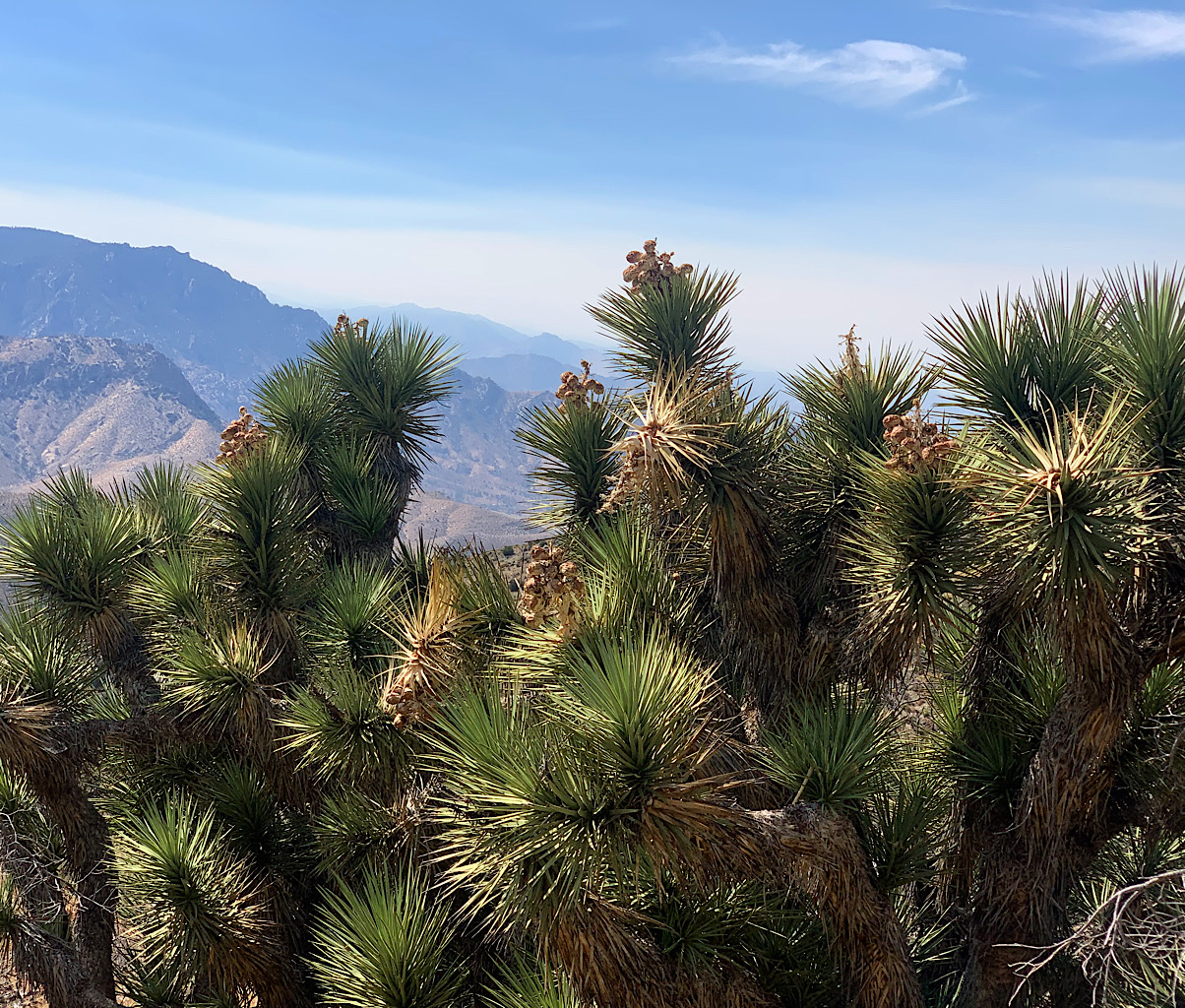 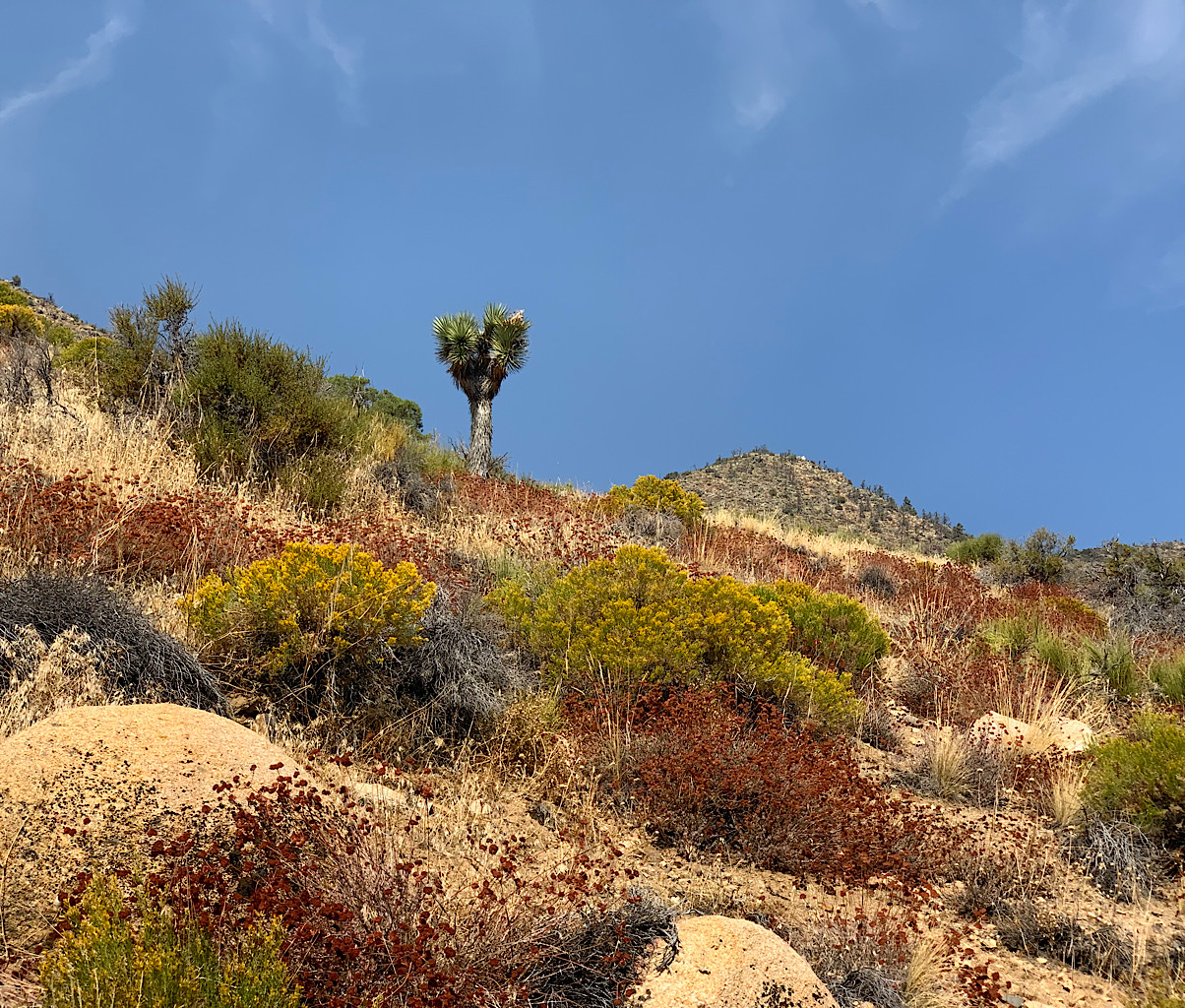 Up and up, across in switchbacks, then a final up to say goodbye to these mountains and hello to the desert, and all the mountains above it. I’m greeted with a row of off-white pyramids, stair-stepping to the flat expanse below. One huge wall of granite remains with peaks and domes turning warm in the setting sun, shadows revealing its depth. But it’s these triangular shaped peaks, orange then pink, that really draw my attention as I walk on a narrow, rocky balcony high above.

A recent earthquake damaged this part of the trail and I remember back to the morning and a sign warning of hazardous trail. Up until now, it was only downed trees over the trail – one ripping a hole in my borrowed pants – that caused any trouble. Here, it’s clear a trail crew has been hard at work, but there’s still evidence of massive rock slides wiping out the trail, one slide taking a bite out of a tree on its way down. My feet feel solid, but the trail sinks and leans in a few places, held up by well placed rocks and in one spot, steel beams.

It’s a spectacular view into this deep valley, nearly invisible from stirred up dust and lending a greater sense of infinity from my great height. My mountains cast shadows on the mountains below, which later cast their own shadows on the valley floor. I am delighted with all I see, but absolutely exhausted from carrying water and the food I’ll need to get me to Tehachapi. Yogi advised we carry that far as we should be strong enough bu now after almost 2,000 miles, but I think it’s not good advice. I may not have brought enough food for what has turned out to be a much more challenging section than anticipated with few water resources and massive climbs. I send a panicked text to Sandy from the ridge. She is coming up to Walker Pass with a hiker tomorrow morning and will meet me with a few more dinners. I feel like such a dope not planning well. I arrive at a campsite on a saddle just as the sun is setting. The others go to a site less than a mile down. I’m somewhat tucked in, but the wind has gotten wild. Let’s hope the alicoop holds together tonight – and that I can sleep with all this ruckus!