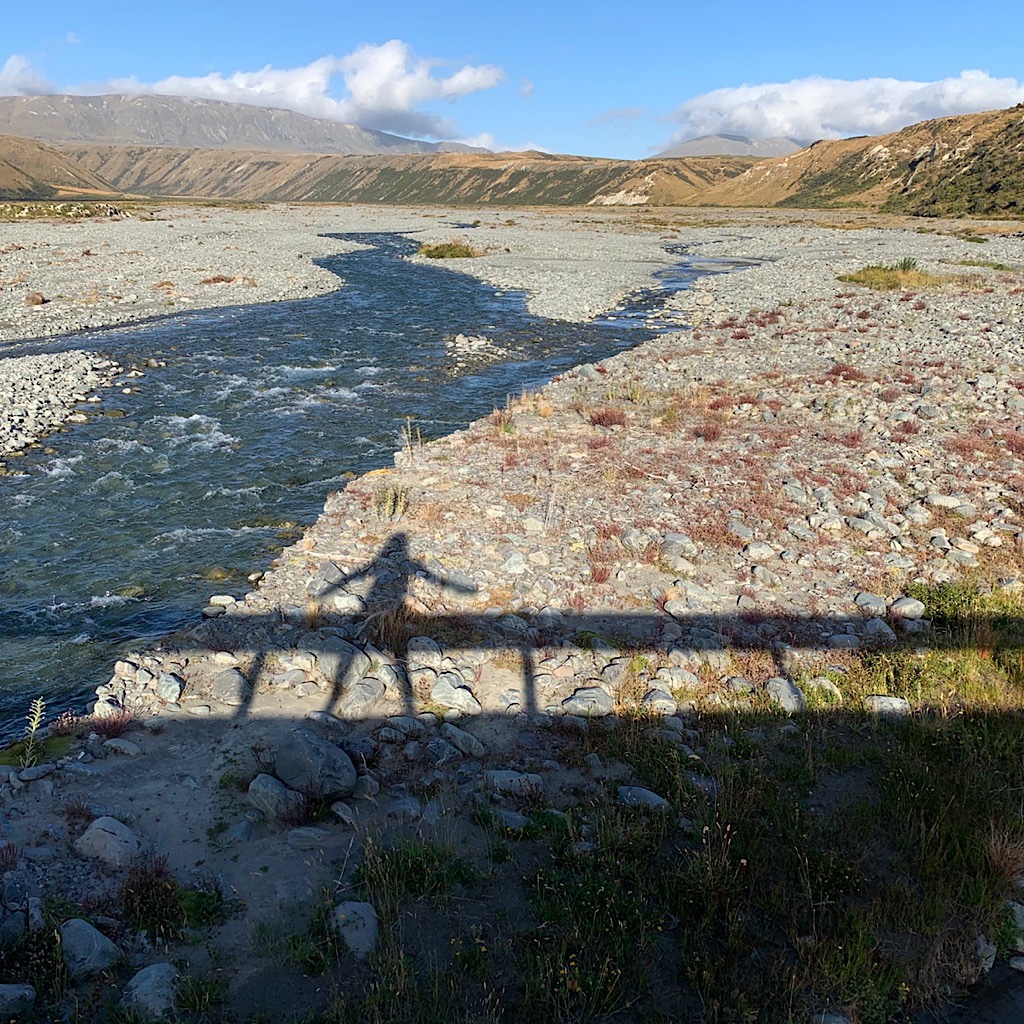 It’s cozy on my bunk as the sky begins to lighten. I’m up first heading to the longdrop on a cold, crisp, clear, and still morning. I worry that Tom will have too much pain in his swollen ankle – not an injury, rather overuse – and he’ll need time to rest, or worse, won’t rest and then have real problems.

I leave a note that says I’ll meet him at the road and to take his time, I certainly will and then I’m out before the sun peaks out. It’s easy tramping at first and gives me the kind of breathing and not having to look at each step to allow me to mull over my life.

I tend to use these moments to argue with someone who’s not here, to come up with just the right rejoinder and close all arguments in my favor. For the past several days, I’ve had almost precisely an identical conversation, anticipating bad news when I return. I stop myself mainly sick of going around and around in circles, but it also occurs to me that I don’t need to choose bad news – especially before it happens. I don’t have to be the victim in the story I tell. I can instead be the champion. 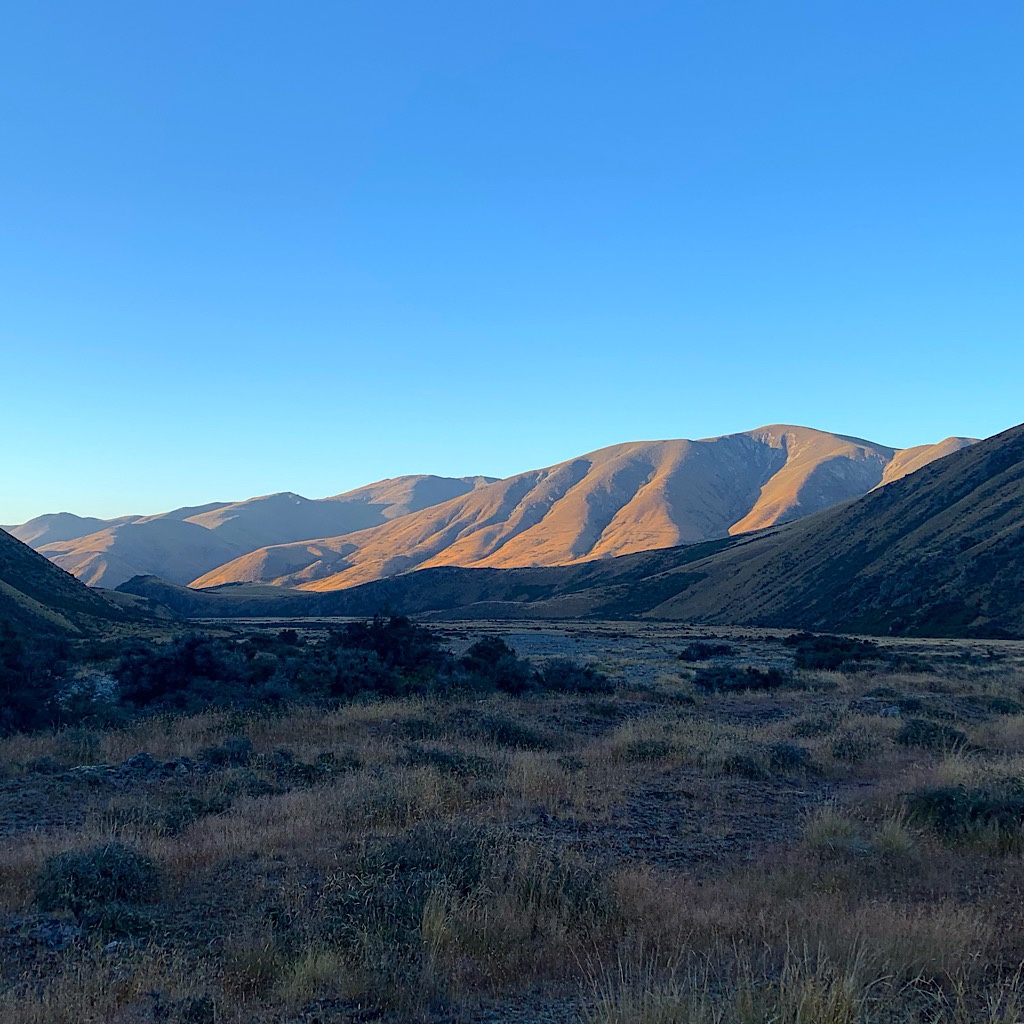 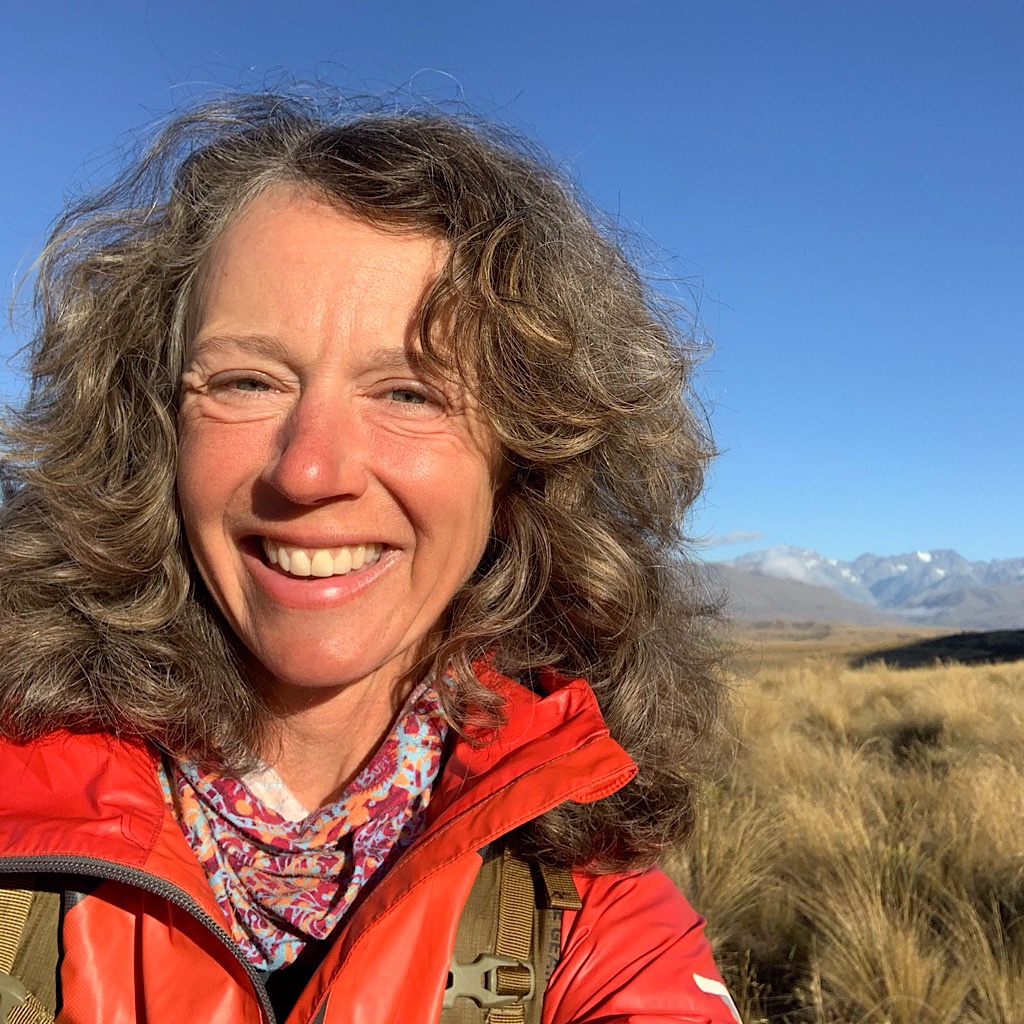 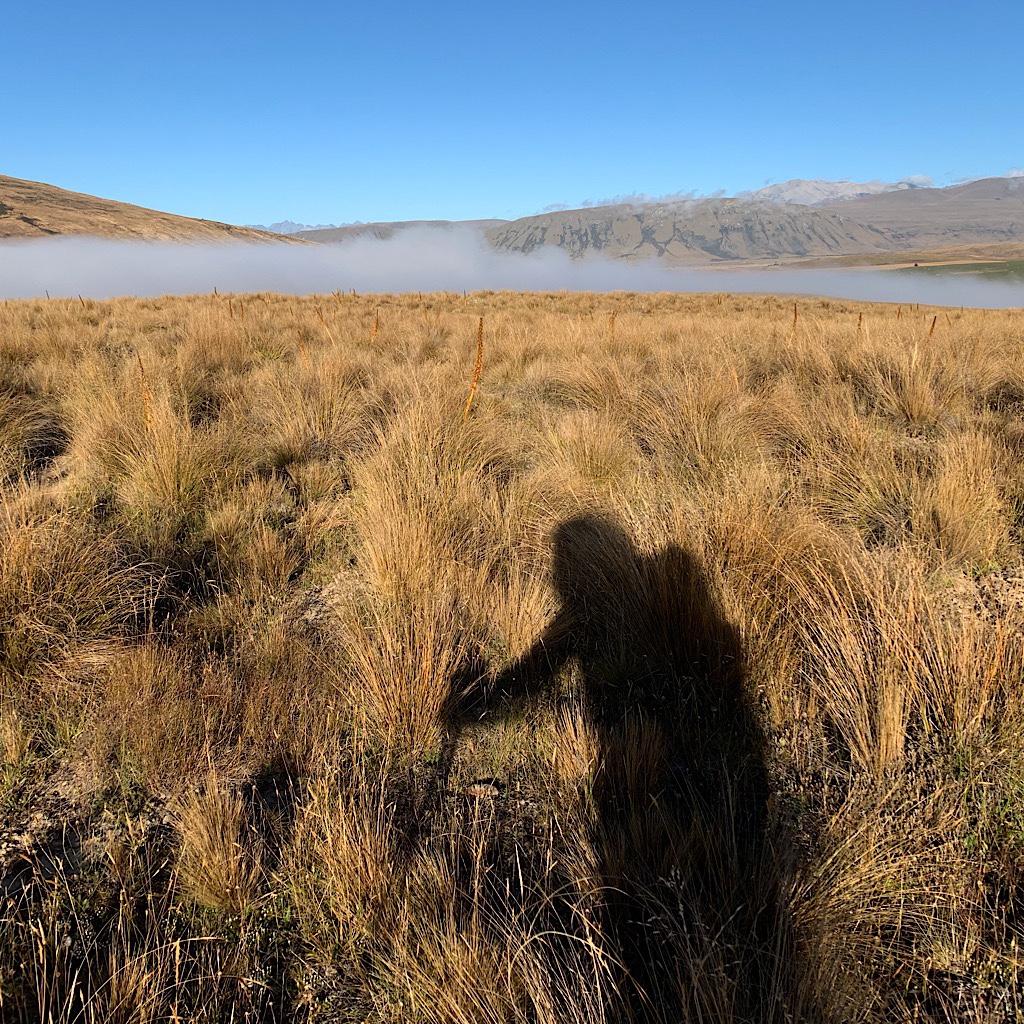 Just then, the trail cuts off and heads straight up through thorns and grass above my head to a saddle. Spread below me is a tarn, which I know only because the map says it’s there. At the moment, tiny Lake Emily is shrouded in low mist, ethereal and floating just above her.

Shorebirds of all sorts – wrybill, banded dotterel, black fronted tern as well as ducks and swans – honk and hoot in the fog.

I’m invited to walk in under a kind of arch – a sun dog in reverse? In I go and the families of birds floating about on this heavenly morning are revealed. 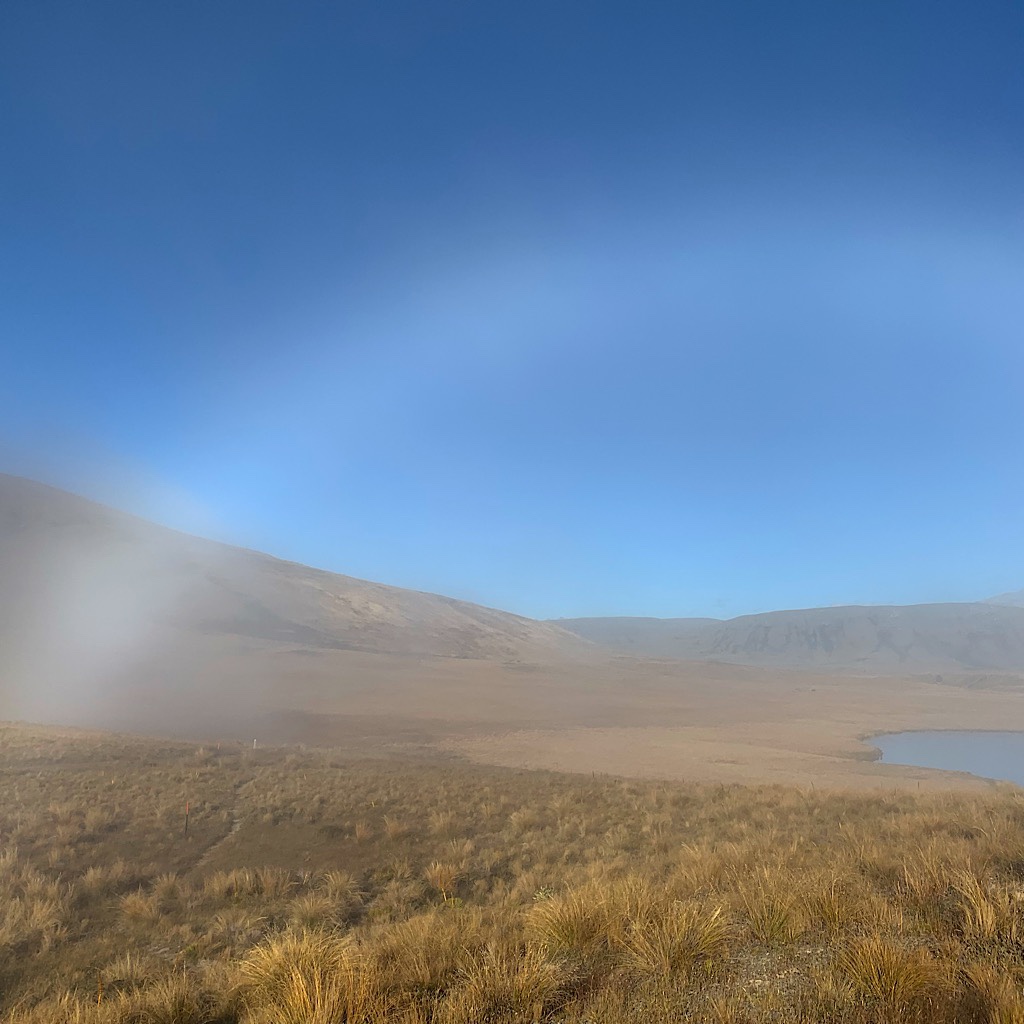 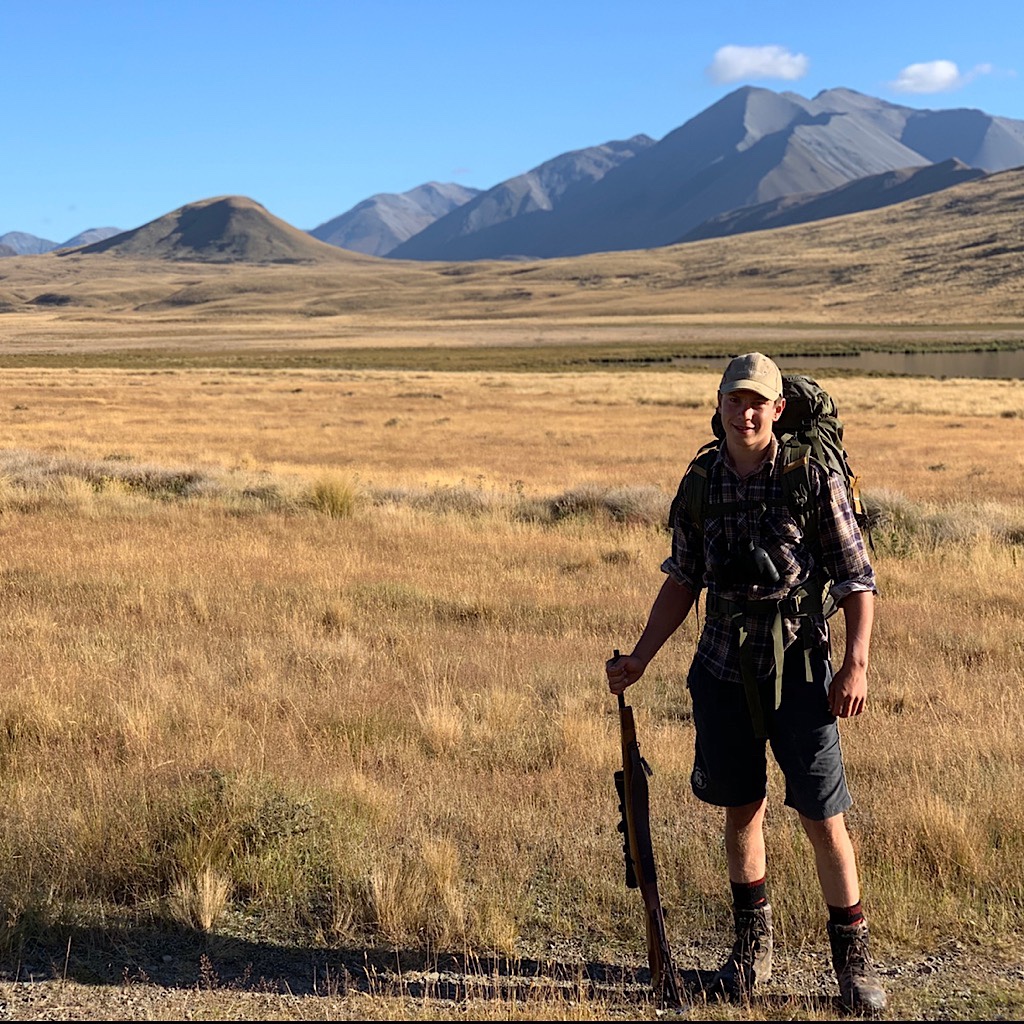 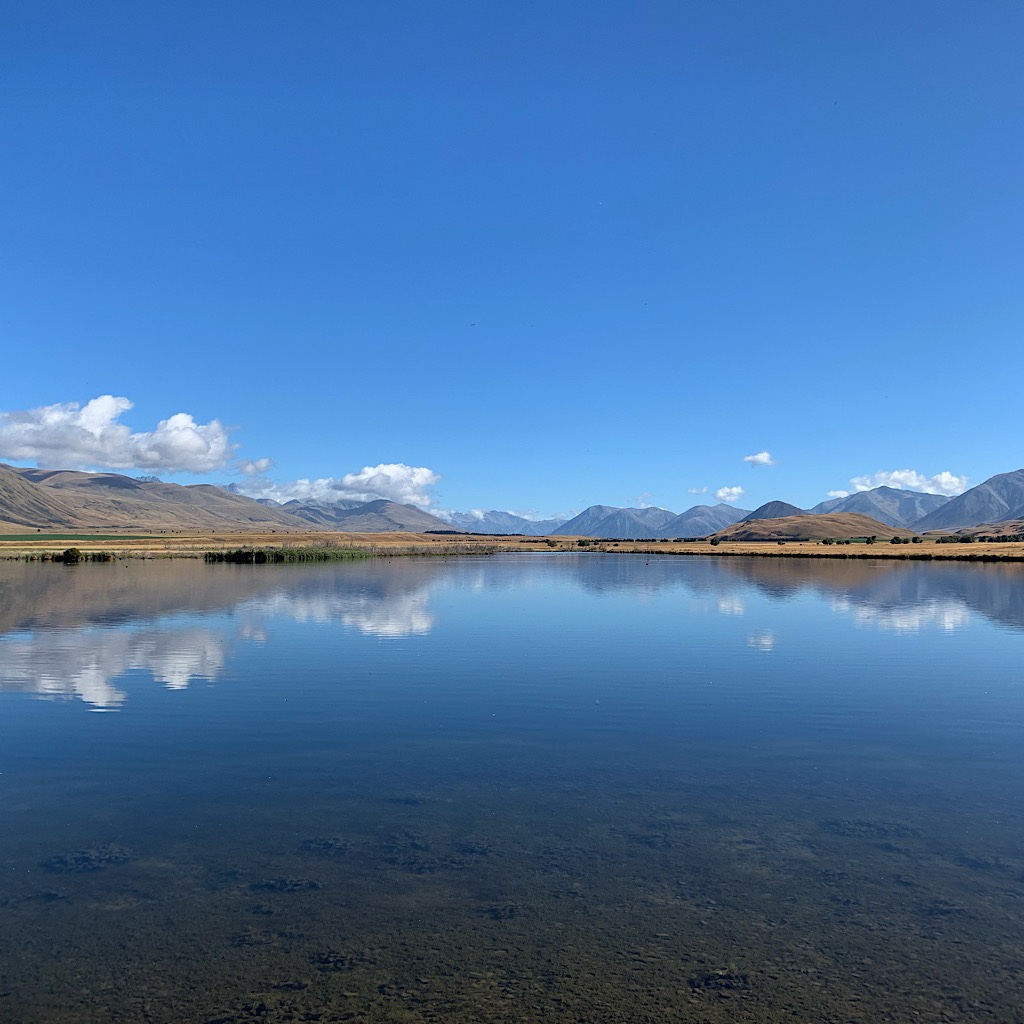 I am in the Hakatere Conservation area. Once a farm, it’s now rich with wildlife and trampers. One comes towards me with a gun slung over his shoulder. A polite young Kiwi who tells me he’s looking for deer. In New Zealand, it’s open season all the time on all invasives. He’s impressed with my hike and gives me a thumbs up before heading into the hills.

Sheep dot the rolling foothills surrounding the 4×4 track I’m walking. I think of other ways I could change the story I tell and remember how it felt to play flute at the level of skill I used to possess. I didn’t always trust my instincts and would force myself to play as I was instructed, even if it felt wrong. Like when playing the opening of Debussy’s ‘Afternoon of a Faun’ in one breath. I managed it – barely – but it never felt like me. All these years later I wish I had ignored everyone else and taken two breaths in the middle of the solo. It makes sense musically and I would have been free to make music rather that simply show off a technique. What I would give to play again.

The track becomes a gravel road, long and quiet except for birds cruising in and out of my path. A few cars come by and stop for me. I tell them I seemed to have run low on food and might they have some I can buy. Both couples are headed out for a weekend’s tramp so have nothing to spare. We wish each other well and I continue on. I wonder if they’re describing me as a fool out hiking without proper supplies. Should I have ‘saved face’ and not asked? Good heavens, no. What they think of me is none of my business and it never hurts to ask. 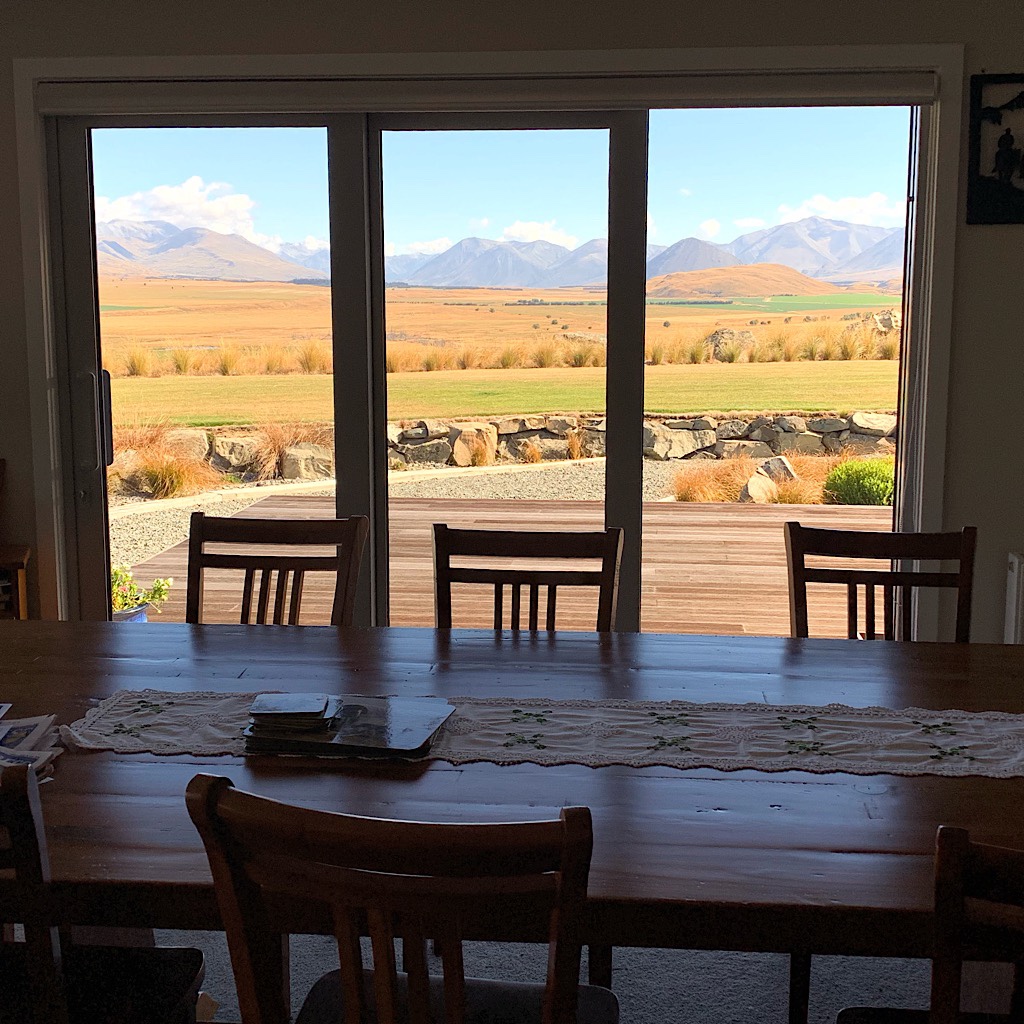 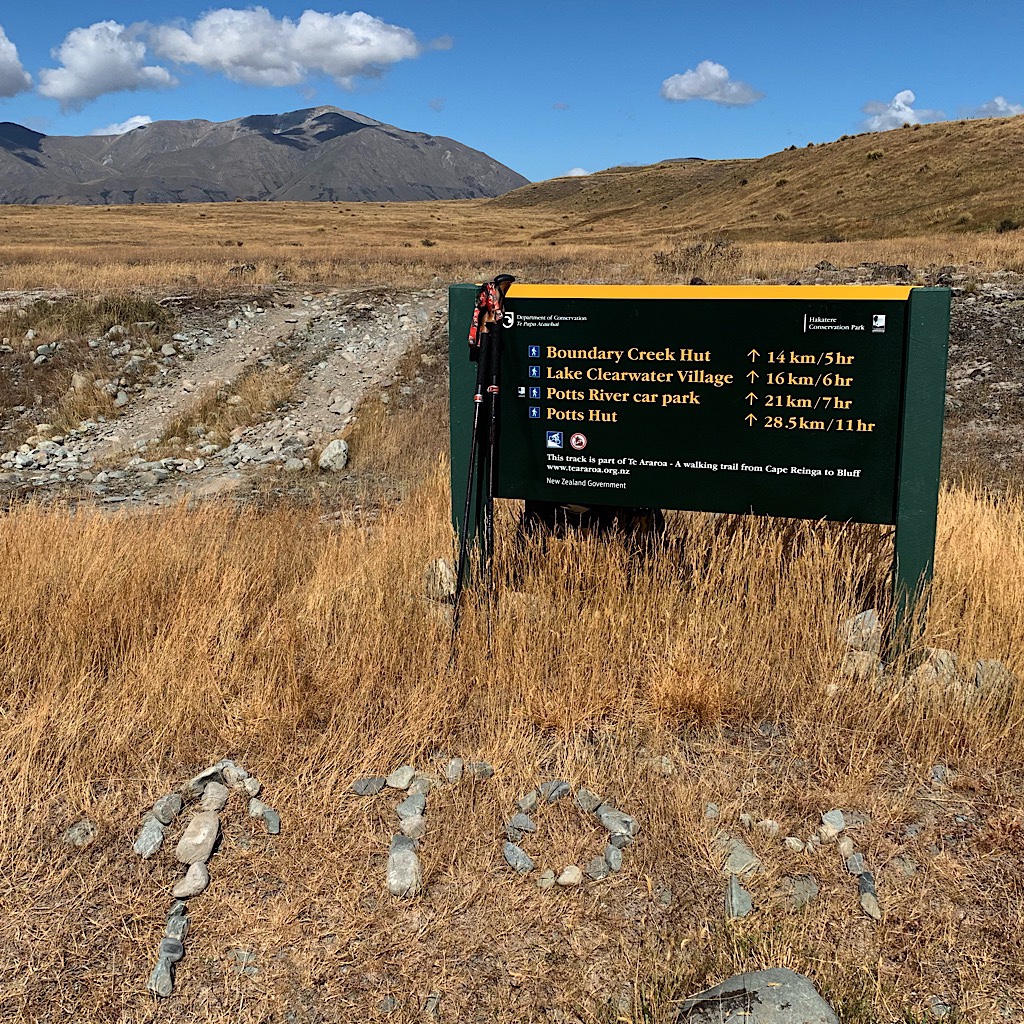 As I come to Castleridge Station – another name for ranch – the postman waves as he drives by. Up ahead, an older man appears to be picking up the delivered mail. He’s friendly and has one of those warm smiles that make you want to keep doing things to make him smile. We share pleasantries and he tells me he owns the station, all 17,000 acres – along with his son whose house I passed.

I explain I’m a bit short on food for the coming days and of course this lovely man invites me up to his house to get me stocked up. Peter and Mary – or as the mailbox reads ‘Ma and Pa’ – Harmer give me cans of fish, fruit, crackers and a bag of chips that don’t last long at all.

Peter tells me that his kids thought he and ma should move to town, instead they built a dream house on a hill looking out at this enchanted wonderland every day. When I tell him about finishing and not being sure what’s next but rest, he tells me about mustering sheep in this high country and how exhausting it is, but it doesn’t take long before he wants to head right back out. He then offers his address for me to write when I’m done. Such kindness and generosity. I continue to be amazed and humbled by this country and its people.

I wave goodbye and arrive at the road, but still no sign of Tom. I set myself up in the shade of a sign and nod off for about five minutes, then decide to leave a ‘note’ in stones and keep moving. 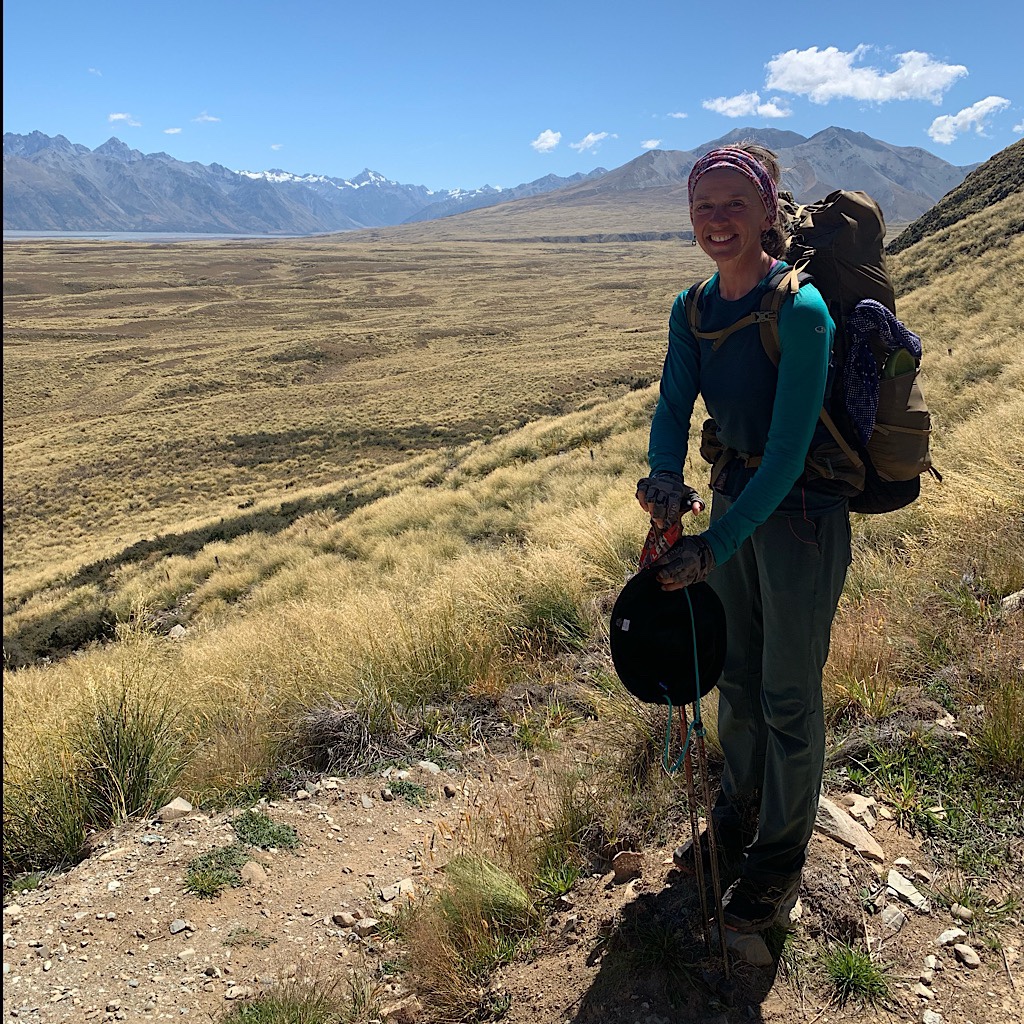 The trail heads up a grassy plateau where I can see Peter’s house far in the distance. Clouds make fanciful shadows on the dun-colored mountains. It’s hot, but I’m drinking more than usual – and peeing more than usual, too.

I come to a beautiful brook, banked with brilliant yellow flowers. Four Japanese trampers, fancifully dressed and covered head to toe like me, are relaxing here. We share a few words and mostly sign language. I just have to take their photo, “Say Mount Fuji!” When I thank them in the only Japanese I know because I heard it said over and over on the train in Tokyo years ago, they all laugh and thank me back, saying, “Nice day!”

Just then Tom arrives and I give him half the fruit. He is delighted. Like me, he also longs for fresh food and has stuffed tomatoes and onions in his pack, plus apples he picked off a tree at the beginning of this section.

Tomaš is 24, very tall and speaks a bit like Lurch with a low monotone. Like Serge who hiked with me for six days in France, I wonder why this cross-generational relationship works. Perhaps he wants to go slower and if he helps out a middle aged lady, he has an excuse. After Tekapo, he is finished with the South Island and will head to Wellington to hike the North Island. These days we’ve shared have been so good for me.

We actually don’t talk much, likely because his English is excellent but not sufficient for deeper conversations. It might also be because he’s so young and we don’t have a lot to say. It suits me just fine as we are together when it matters like tomorrow crossing the Rangitata which the TA calls a ‘hazard zone.’ Crossing is doable, but will take a long time and needs to be done in perfect conditions of low flow and no rain, exactly what we have now. 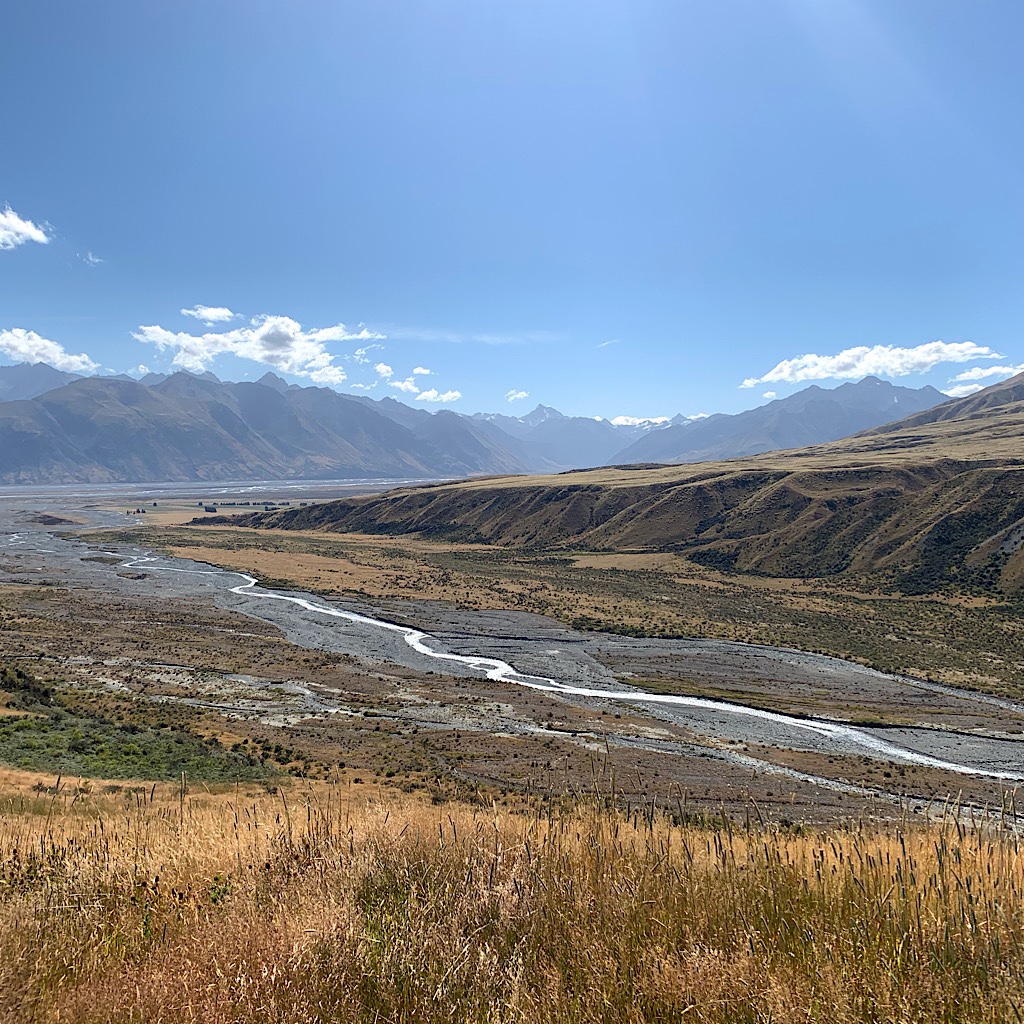 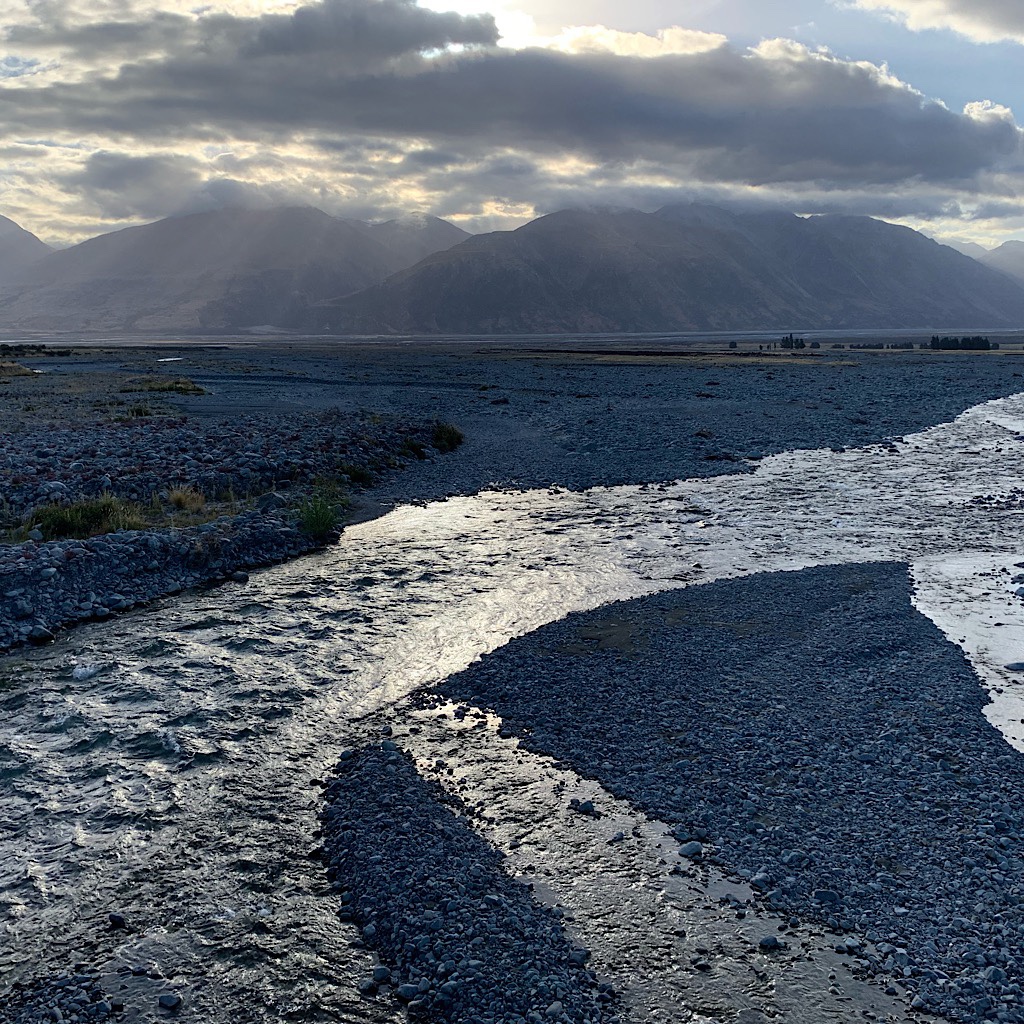 Tom’s ankle is better since he rested, sleeping in until 8. He wants to push all the way to the car park today, which makes for a long day, but is a much better place to get a jump on the river cross. He’s also interested in climbing a small peak nearby used in The Lord of the Rings. Maybe we can hitch.

Tom suggests we save the crackers and salmon to celebrate at the hut tomorrow and I’m all in. We find another stream to relax next to with a light breeze and no sandflies. Tom makes me a peanut butter wrap.

I walk on over another saddle which reveals a chain of jagged, snow-capped mountains twice – or thrice? – the size of the Grand Tetons. A deep blue lake rests below and its tiny village tucked into the vast expanse of tussocky grassland. A couple rides up the trail on mountain bikes asking me the highlights of the TA so far. So many!

The wind rushes through the red-gold grass making a whistling sound and the orange trail pole flutes as I approach. Soft, tundra plants massage my steps. I pass blue tarns with electric green grass on the edges. 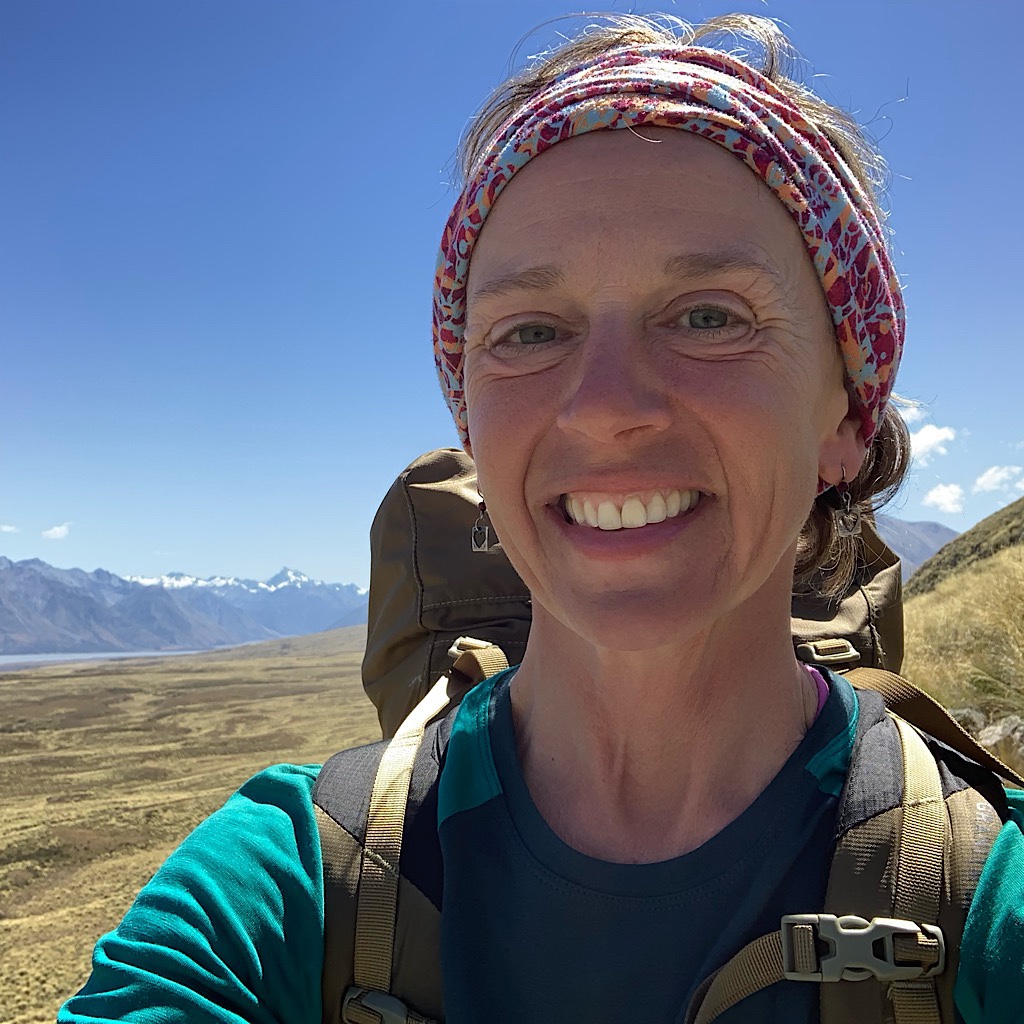 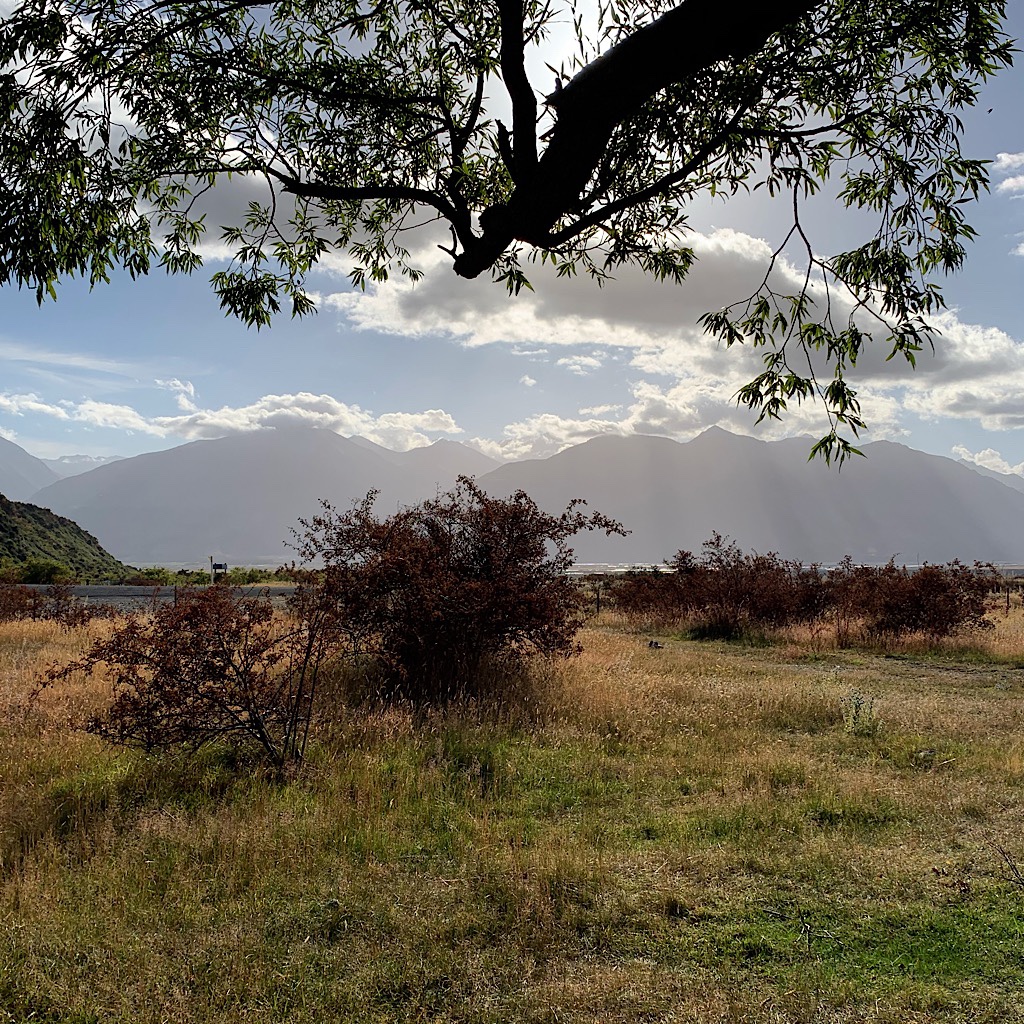 The feeling of this place is awesome in the truest sense of the word. It’s huge, powerful, menacing, ageless, dumb but somehow full of story and meaning. I feel tiny in this expanse.

The trail works its way past a farm and down steep, chalky cliffs onto the Potts river terrace as it heads over rocks and boulders dragged here in flood, emptying into the mighty Rangitata, a complex system of braided waterways and more boulder-strewn islands and terraces.

There’s shade without bugs at the carpark and the alicoop is up quickly, my view into the mountains I’ll walk on tomorrow. I do stretches on the bridge while the sun plays hide-n-seek with the clouds resting on the summits. I suddenly realize I’ve passed the 2,300 kilometer mark as I nestle in for what I know will be a great night’s sleep on a chilly night after one of the best days of the hike – beautiful country and more unforgettable experiences.