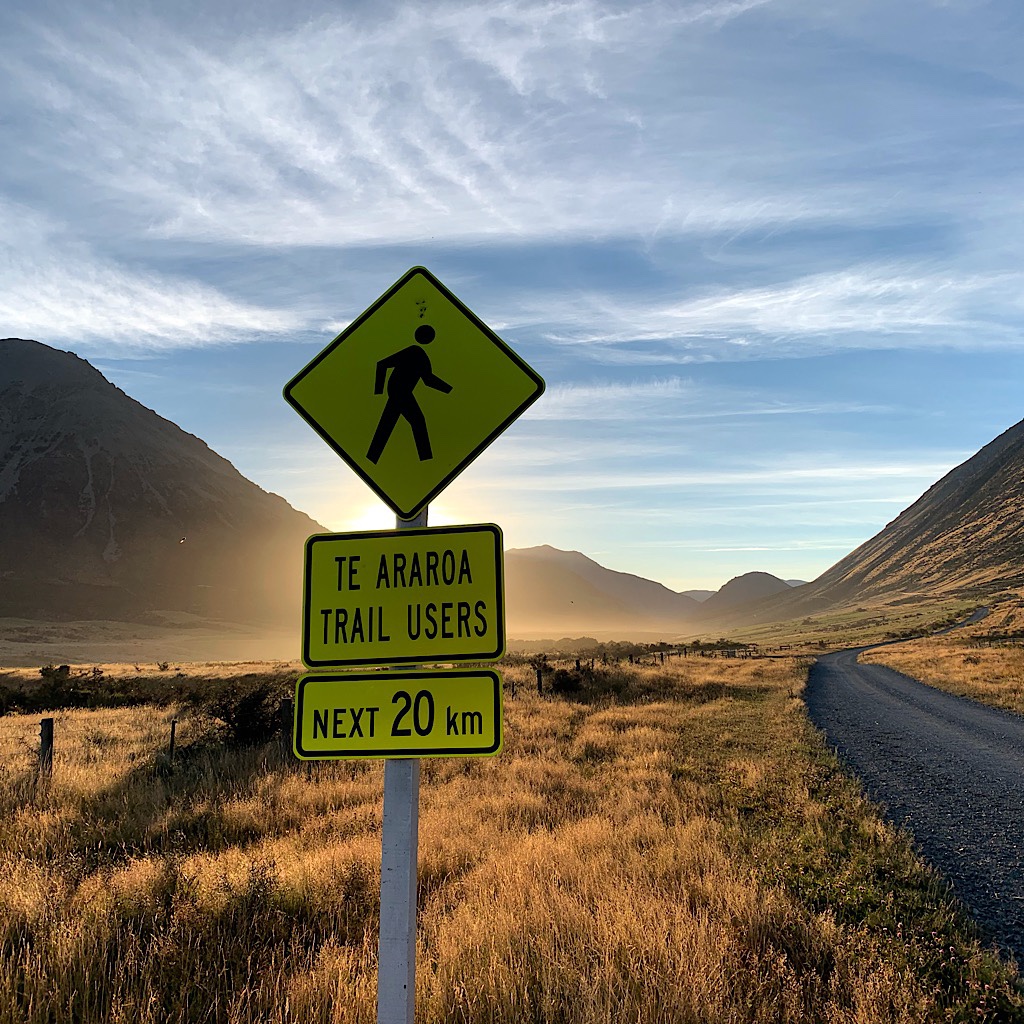 Such a lovely night with brilliant stars and later a crescent moon on her side. People arrive late and release their dogs next to the no dogs allowed sign. At least they moved further down the way and got quiet fast.

People make me feel safer, but too many make me feel crowded. I have released myself to whatever happens today, but I am the first to leave the camp site. 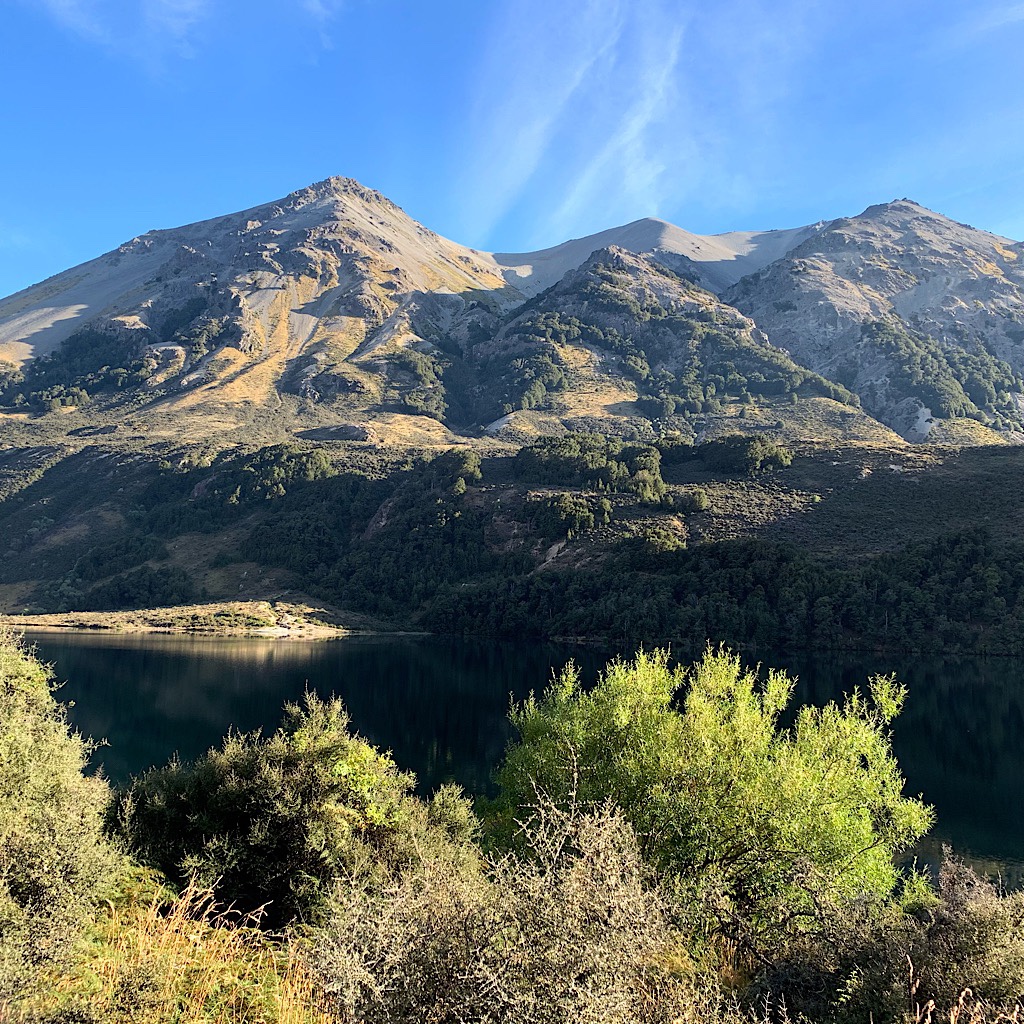 The sun makes the mountaintops golden against purple shadow as I try to maximize the cool air heading up a dry, dusty road. Suddenly in front of me is the only road sign of all 3,000 kilometers that warns traffic of Te Araroa hikers. Cars that pass me leave a wide berth, but stir up heaps of dust. It’s going to be a long morning for this TA hiker.

I pass Lake Selfe, mistaking the name for selfie and immediately taking one for good measure. The sunlight hits me straight on, creating a sparkly glow around fantails flirting nearby. The grass shines like oiled plastic.

Cheese Man catches me and passes regaling me with stats on his phenomenal speed. I immediately slow down to take photos. 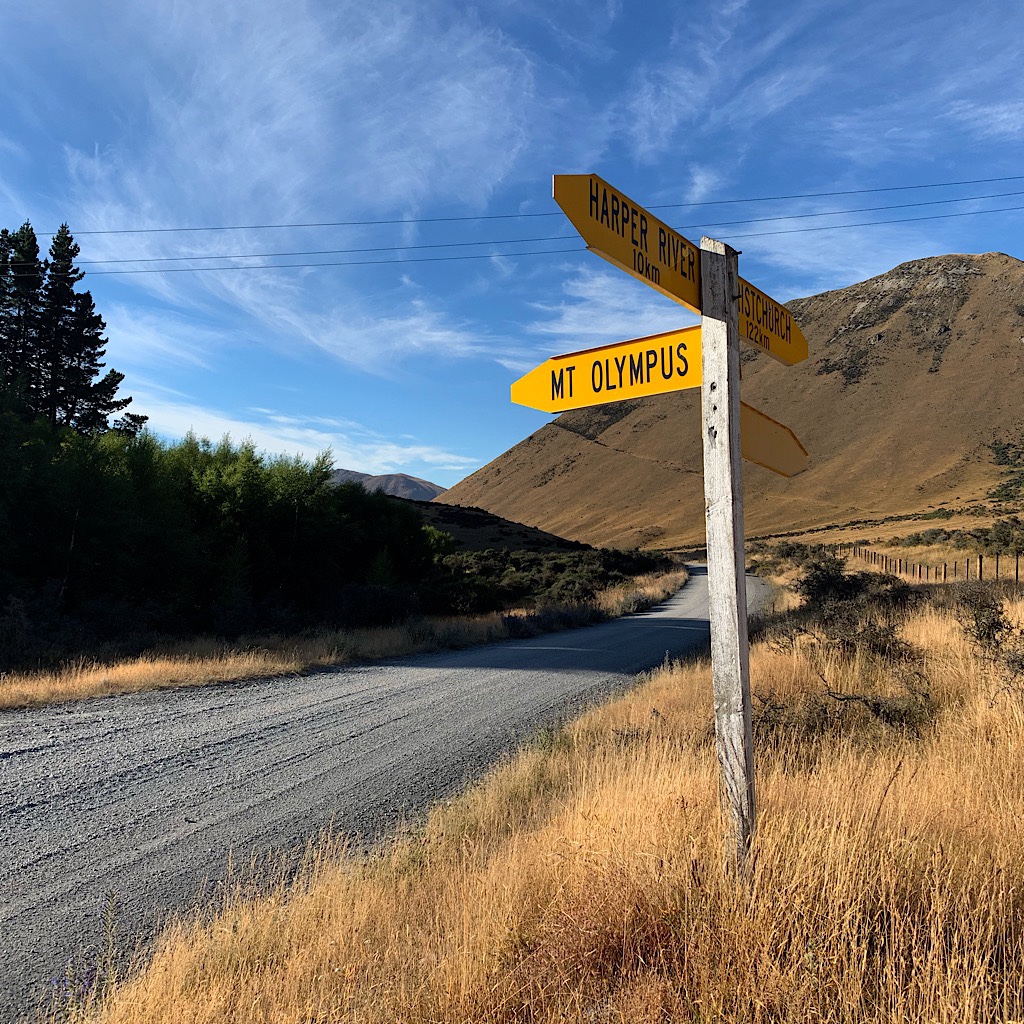 I take many stops for water on this unusually hot day, passing a sign toward Mount Olympus. I pass Cheese Man again and he repeats his itinerary for the day adding he’s really going far too fast.

As I slip away, I see a couple hunting around on the side of the road for something. At first I think it must be TA trampers, but then notice a car and lack of packs. I say hello and ask if they might sell me a soda. Sorry, only water, but they offer me a beautiful, red, juicy and delicious apple. Even better than a soda!

We talk a bit about what they’re doing – collecting St. John’s Wort – and they ask about the trail. I somehow have the presence of mind to ask for a lift since the hazard zone is coming up, and they offer to not only get me to the junction, but take me all the way around to the trailhead. I am so fortunate and knew to just let the day unfold. 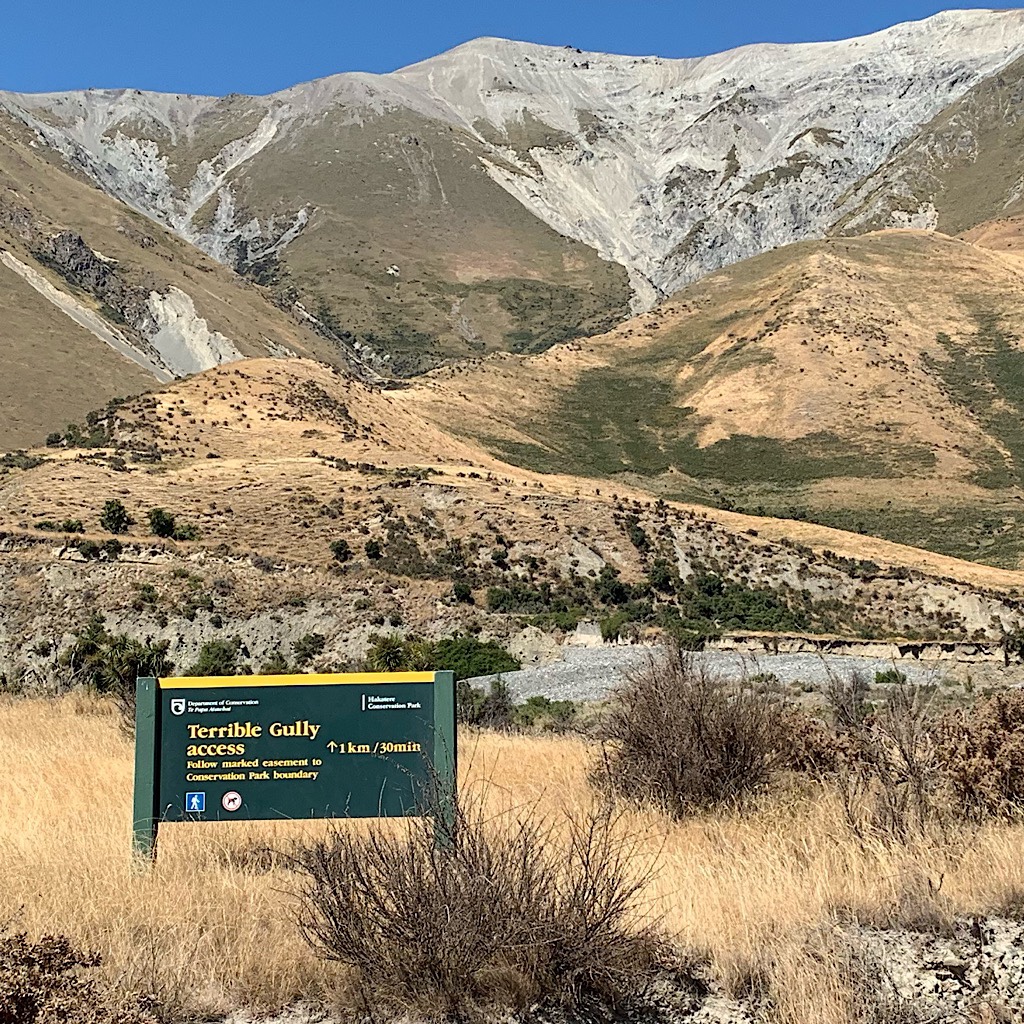 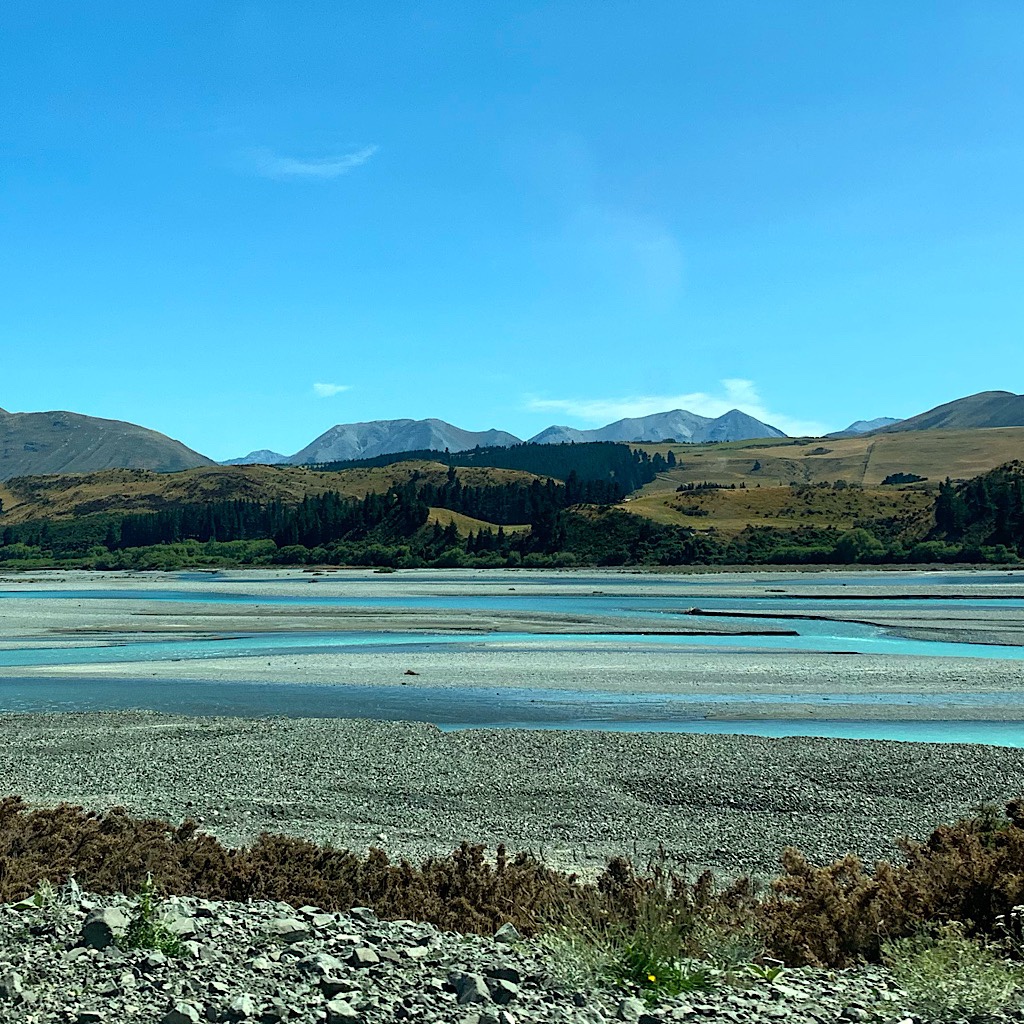 Neil, a professional photographer and Kate, a disillusioned primary school teacher, are from Christchurch and super cool. We chat the entire way about why the Rakai is considered impassable on foot – “People get hurt in the mountains but they die in rivers,” – the controversy surrounding the use of 1080 to get rid of all the introduced predators on New Zealand, how Kiwis say ‘in the South Island, not on,’ my work and their familiarity with Garrison Keillor, that it’s really cold in Minnesota now, and how St. John’s Wort is good for all that ails you. I should have asked for some for my sandfly bites.

Most important we speak of tramping and how hard it is, how often ‘un-fun’ – they both laugh at my name Blissful Hiker. But Neil says that level of fun which is a hard struggle is only fun later upon reflection. I feel this every day at the hut or in my tent, looking back with satisfaction, pride and yes, some bliss at what is oftentimes on this particular hike, a slog.

I am so grateful they were willing to take me around the river, about 50 kilometers. This trail leaves the hiker with many awkward – and oftentimes expensive – details to work out. I really didn’t want another town break, rather preferring to continue hiking. We arrive at the trailhead – a term Neil says is pretty un-Kiwi – they fill my water bottle, let me take a picture of Neil’s business card, and off I go on the next section, elegantly named, Rakaia River to Rangitata River, the next river also an impassable ‘hazard zone.’ 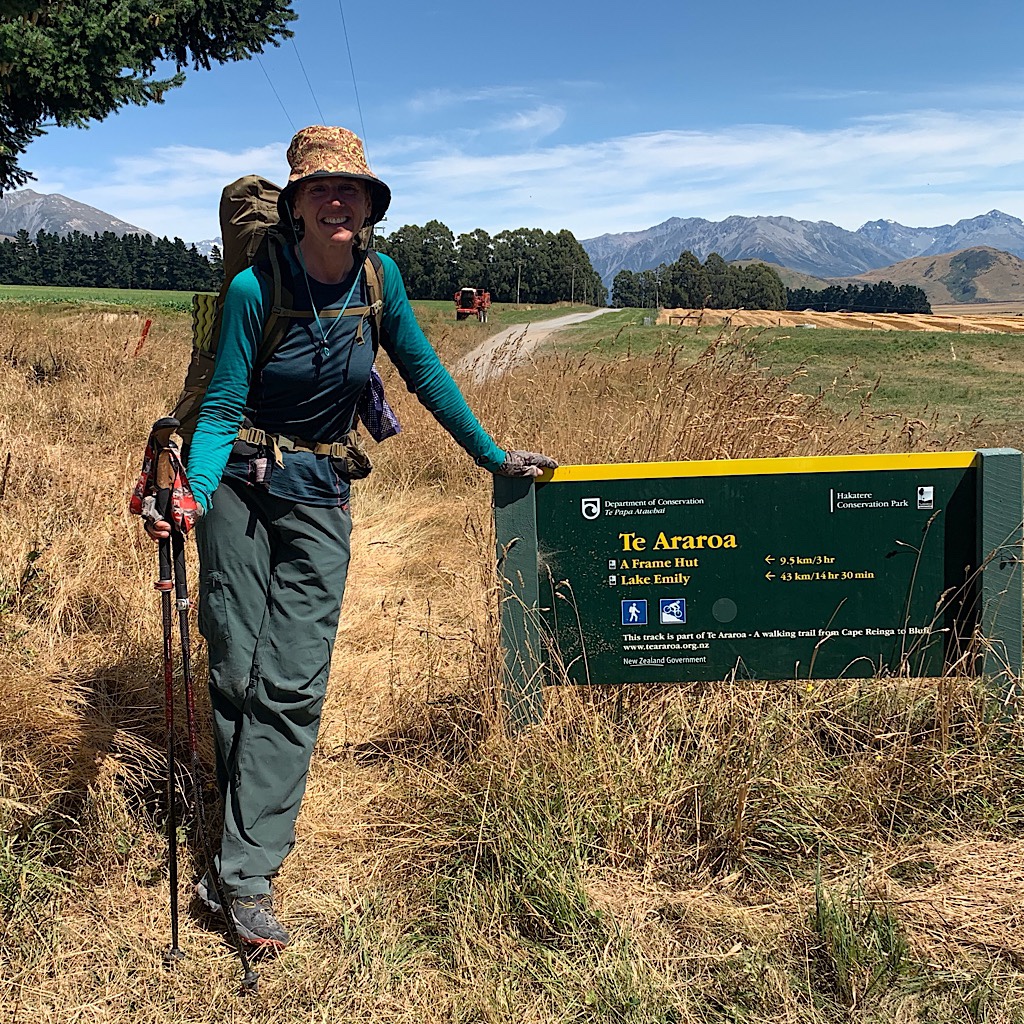 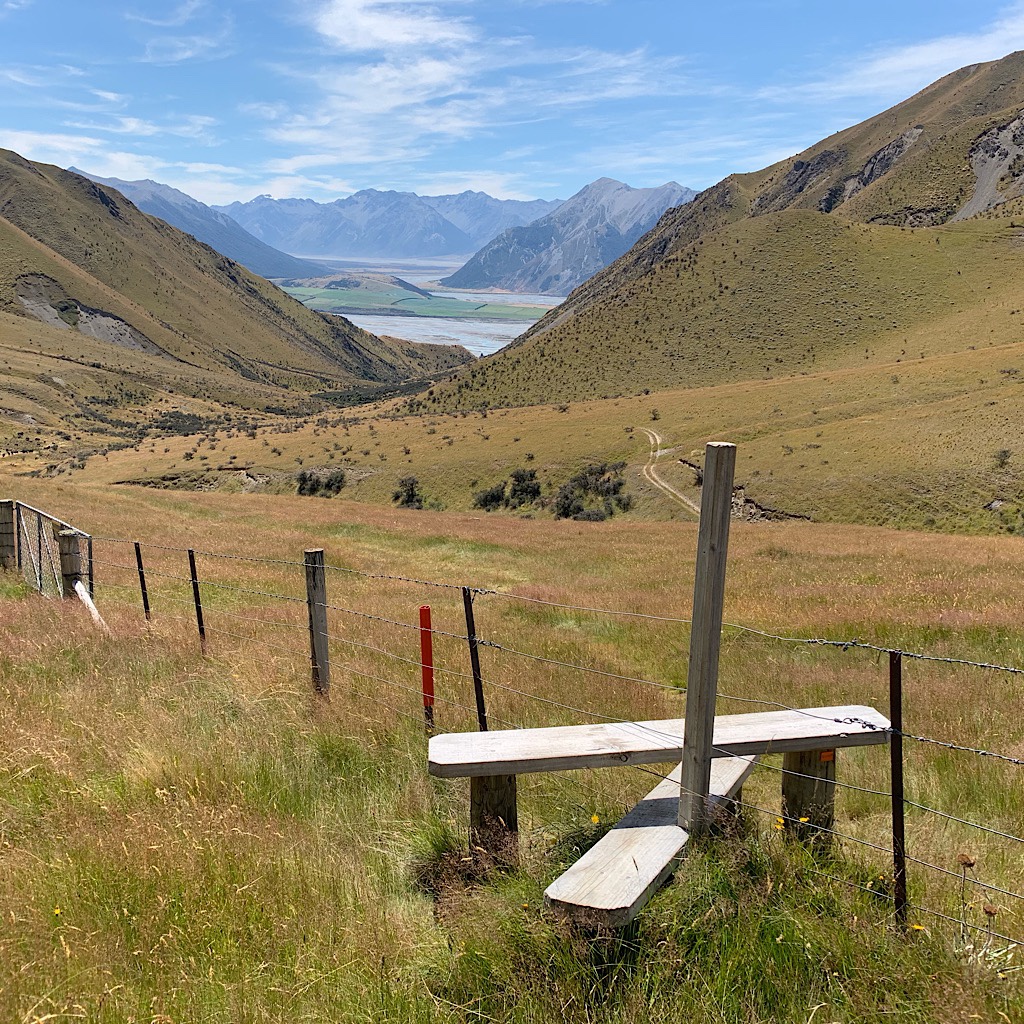 It’s uphill with cows grazing, crawling under an electric fence into soft grassy mountains intersected by rushing streams where I fill my hat and dump it over my head. One all black cow eyes me, her huge also-black udder swinging as she warily passes then moos a bit distressed. A huge zigzag ahead takes me over a saddle with a last look back at the enormous spread of the Rakaia before entering higher and drier country.

A man sits in the wild flowers ahead. It’s Tom! “I have been waiting here two days for you.” And we both burst out laughing. Kačka, Kuba, Amelia and Jean-Christophe race ahead but he has some ankle pain and is taking it a bit easier, though he flies ahead of me as I work towards the first hut in this beautiful countryside, cicadas leaping into my face buzzy against my skin.

It is the cutest – and tidiest – little three-bunk A- frame set next to a stream with yellow flowers on its banks. He says he’ll stay here, and I do too. I wash up, put on my $7 Nelson charity shop dress and make an early dinner in the shade as loads of bugs land on me buzzing, hopping and twitching their legs, but not a single one biting. It’s six days to Lake Tekapo and Tom says he’ll share food as I realize maybe I don’t have quite enough. I tell him if he gets us out, I’ll take him to the restaurant of his choice. We shouldn’t have a problem but we both want to chance our luck and cross the next big river “hazard zone.” After that? Even more river walking. 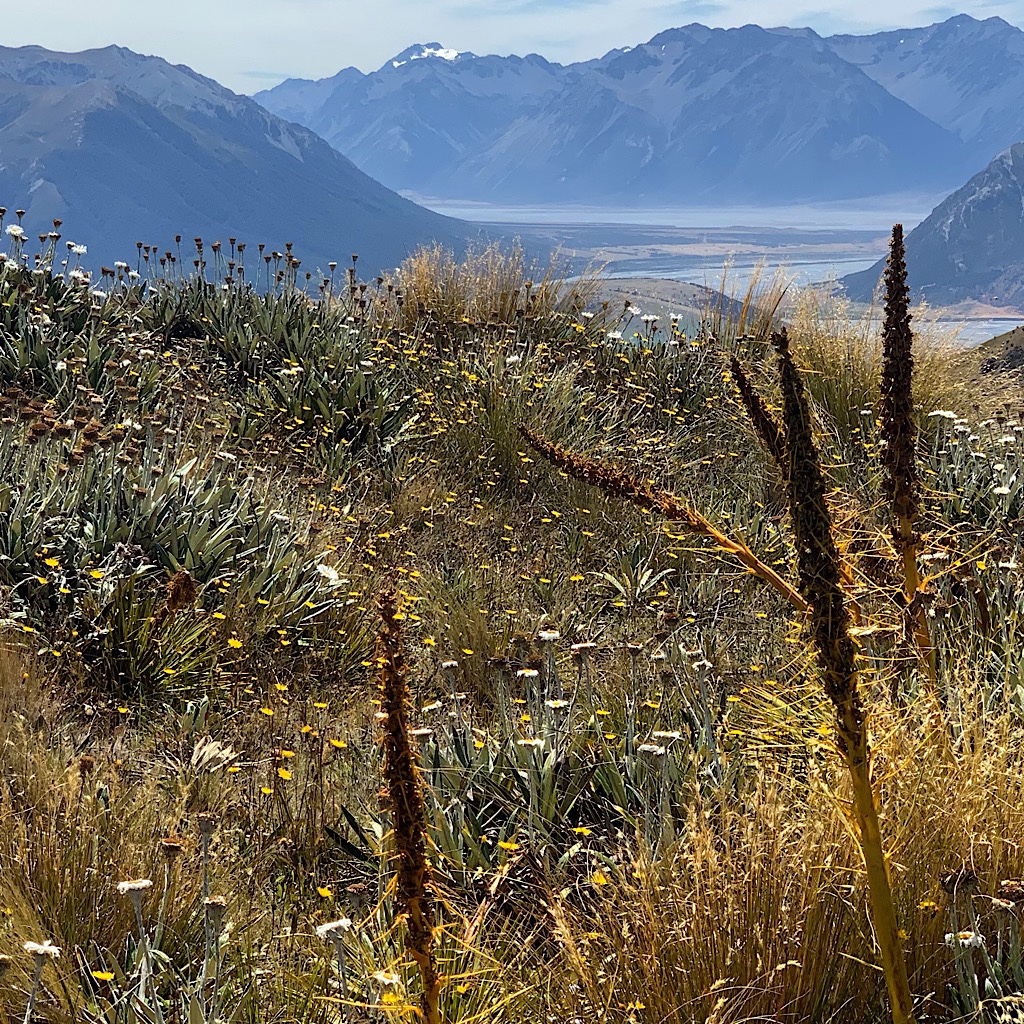 But now the sun is behind the mountains, the air is delicious and cool blowing in my hair, the stream gurgles and – so far – it’s just out quiet selves in this idyllic location.

Oh, how the day took care of itself and the gifts I received! It’s absolute bliss. 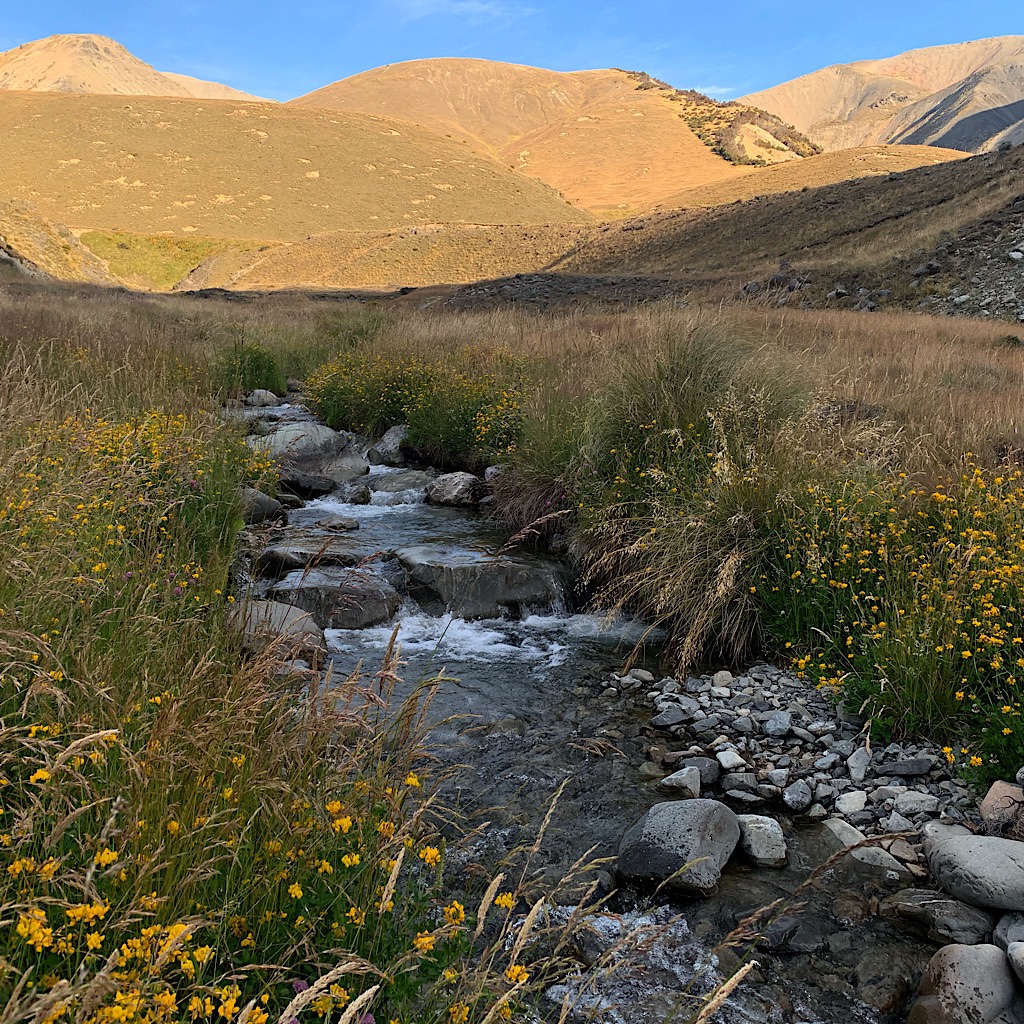