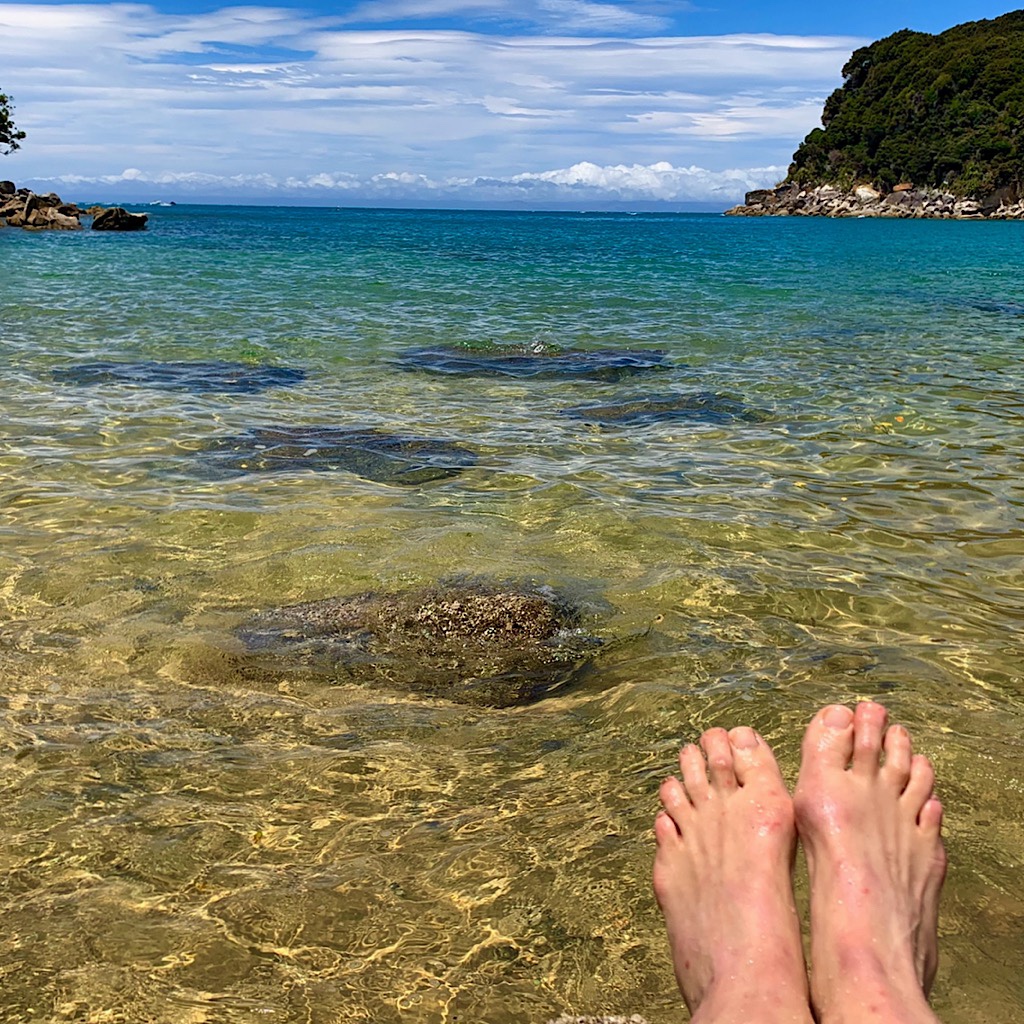 Today is my second side trip, to beautiful Abel Tasman park. Steve makes a plan and we head out with Mozart cranked through the Moutere valley and mile after mile of grape vines.

It has the feel of California, those wineries, plus golden hills, water restrictions and ocean awaiting my eyes and body.

How did I get so lucky? Steve is a classical music fan but tunes into the local station. But when opera comes on, he switched to his hometown station and saw the piece on the MPR website about my hiking the Te Araroa.

Of course he wrote and invited me to visit a place I long felt curious about. But who knew he and I – and Maggie – would hit it off so well. Like old friends, I’m already called Al. 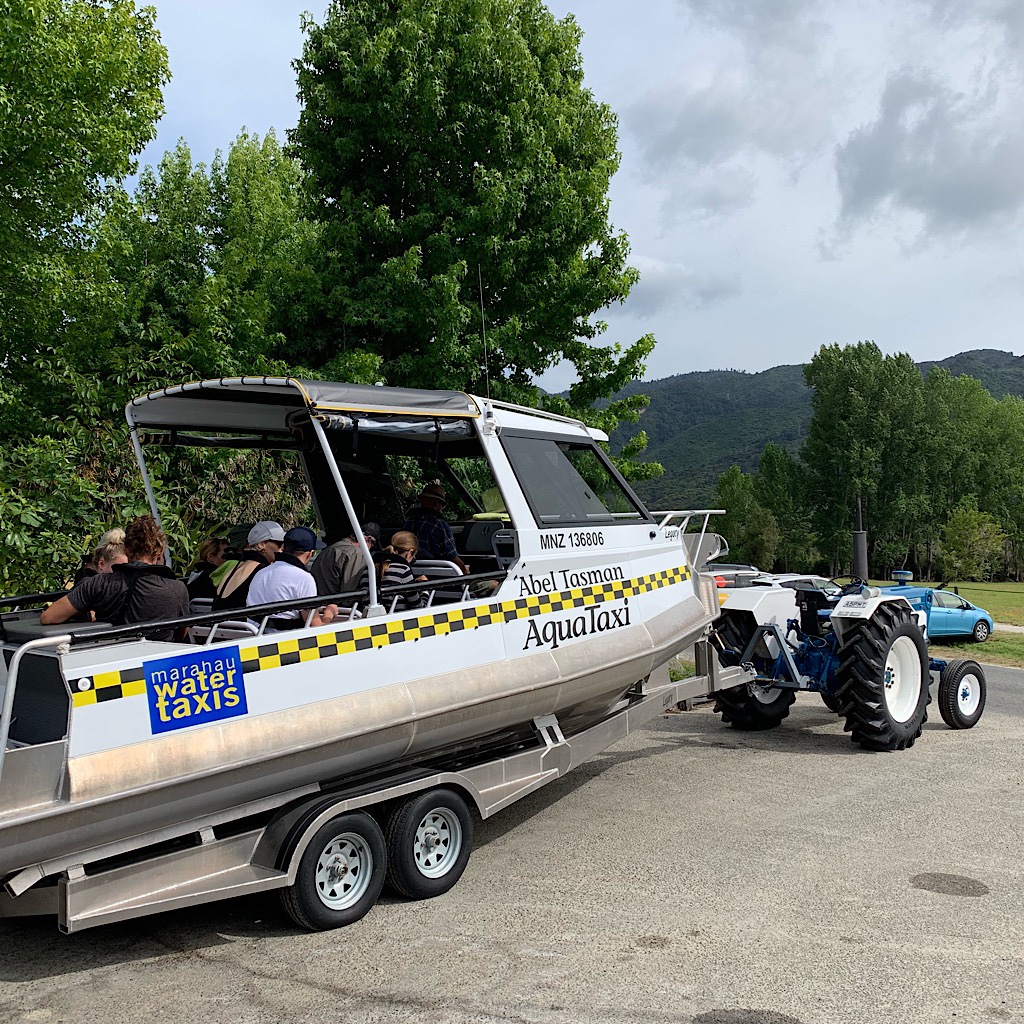 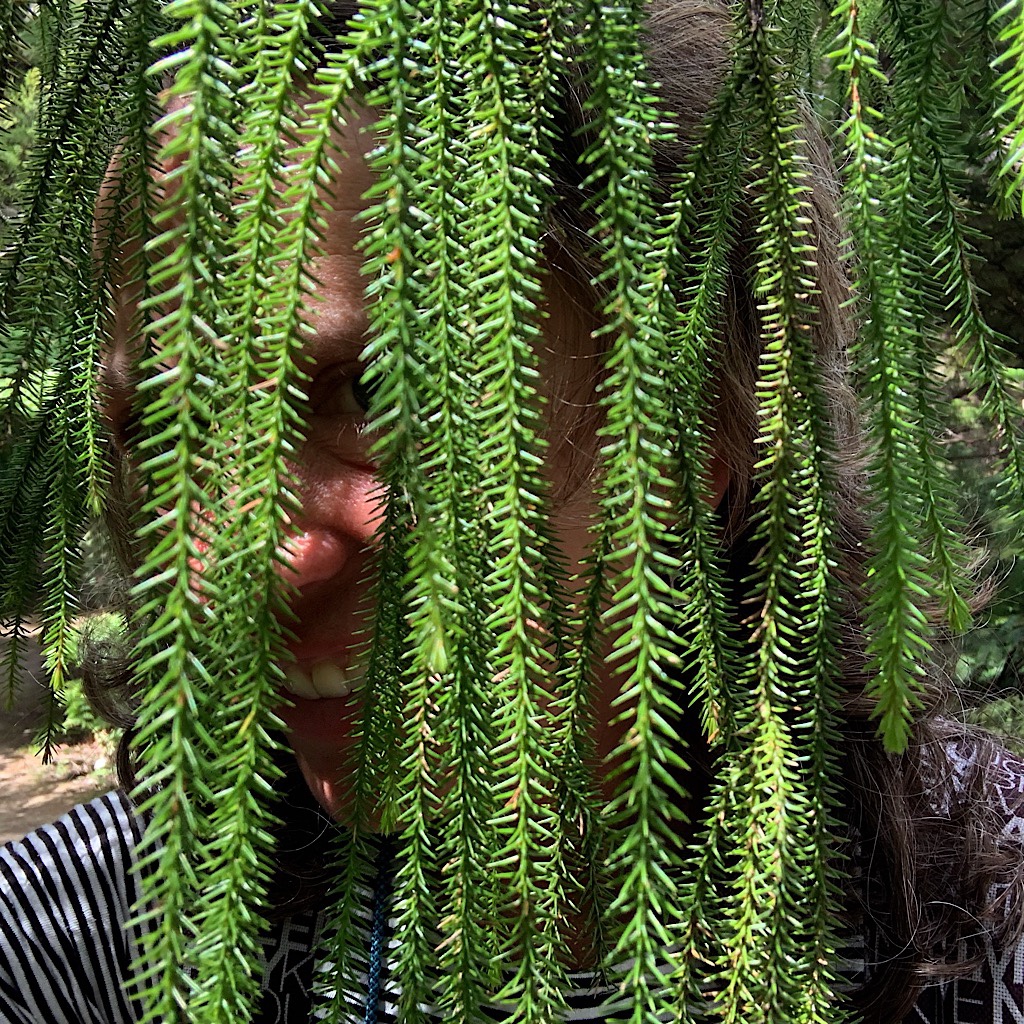 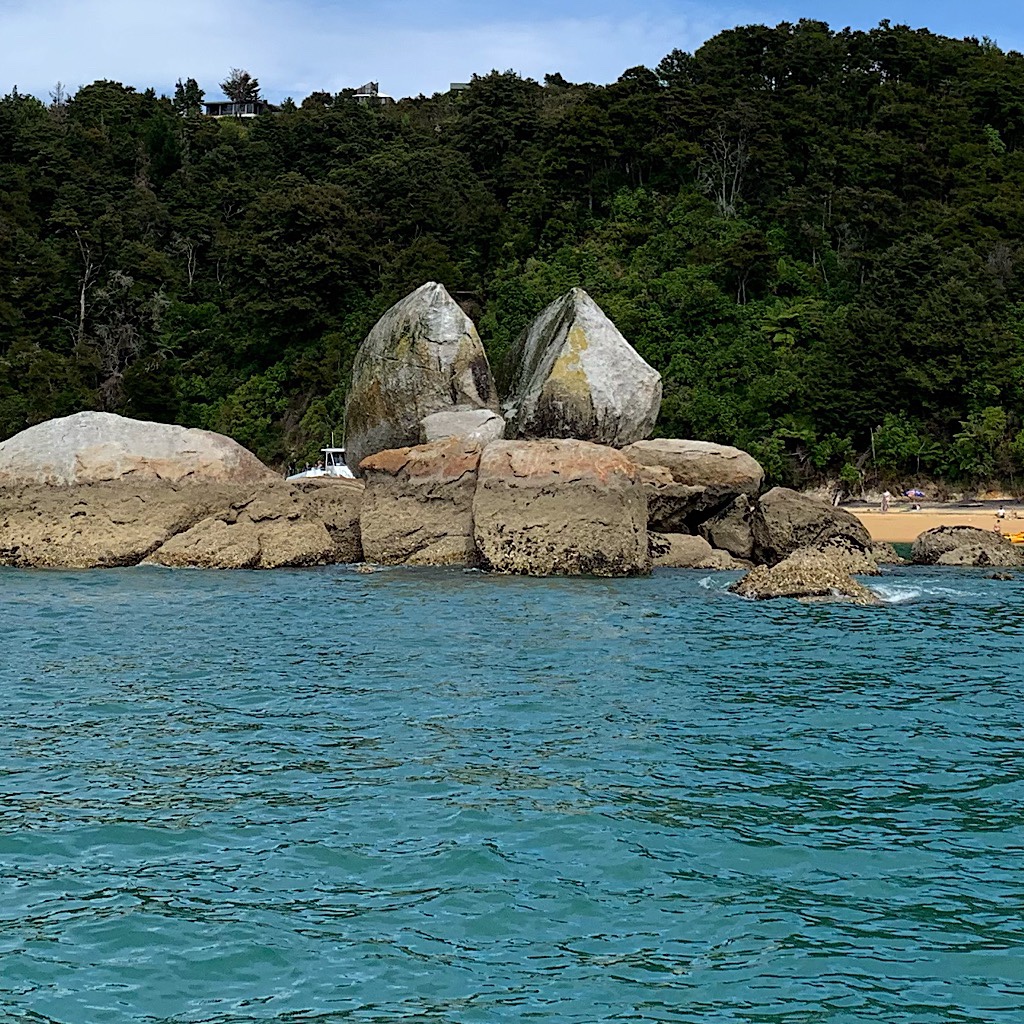 With just a partial day, we take an aquataxi to Anchorage, carted out in low tide sand by a tractor named ‘Danger.’

The boat ride takes us to a perfectly split orb of granite, like William Tell’s handiwork, then seal spotting before we’re dropped isoff to walk on the coastal track to Te Pukatea, a tiny picture postcard bay. This gem of a park is dressed in white, green, turquoise and gold, the water’s vividness shocking the senses each time I look. A woman at the Sound tells me the water takes on this brilliant shade of blue because the bush clarifies the water. That’s scientifically inaccurate I tell her, so she adds defiantlt, “That’s what I like to tell myself.” And so do I, marveling at all the energy – and money – that’s gone into removing every invasive plant and every invasive pest in the bush as possible. Perhaps it has made the water that much more beautiful. 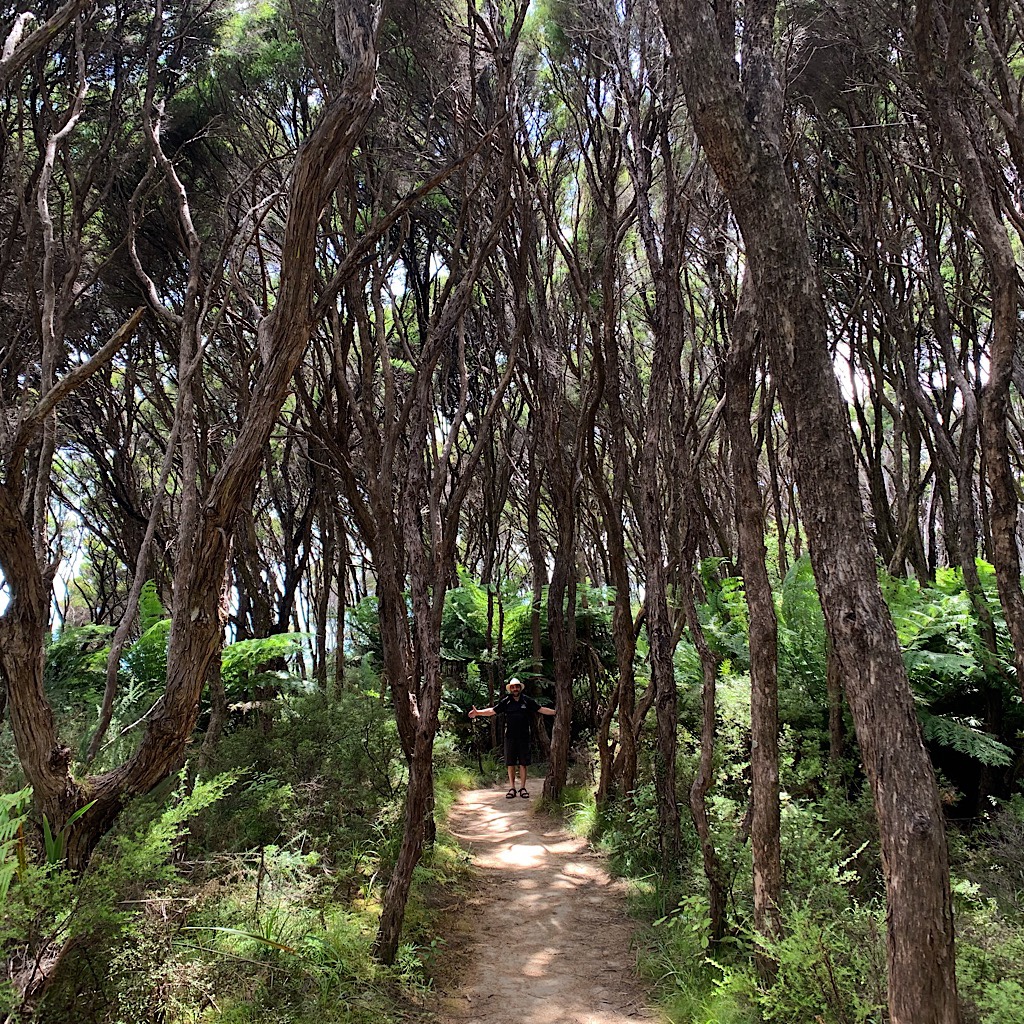 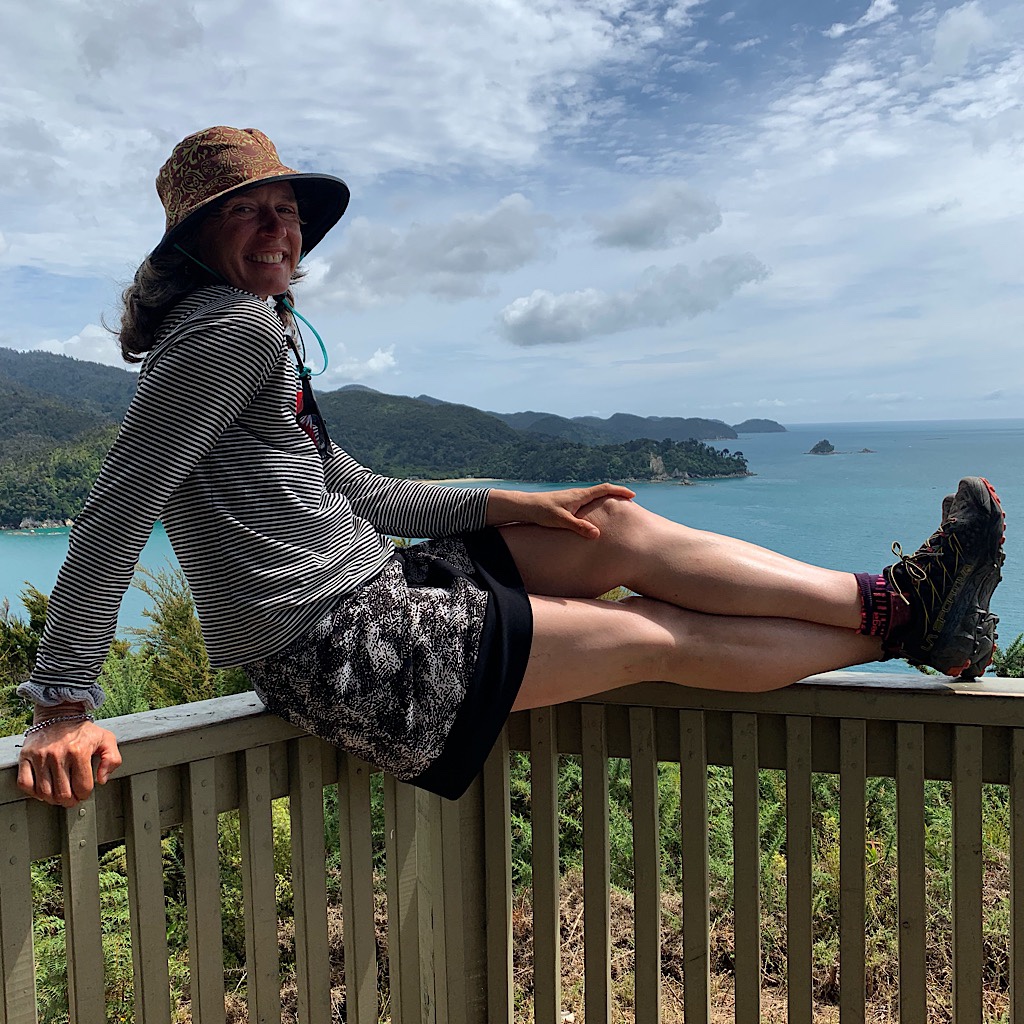 We sit on logs in the shade and eat bagels on the beach, with lox and extra cream cheese. Steve tells me about his journey across the Pacific on a 23-foot sail boat and I marvel at his courage and the sights he saw.

Soon, I’m in the water, salt burning into my fly bites. It’s cool as I bob in the waves and taste the brine. A shag peaks out, holding his head proudly before torpedoing away, his narrow brown body visible long after he’s under water.

The wind picks up and the air gets cold. I find seashells for Maggie, then we return on bumpy waves, belly flopping every now and then. 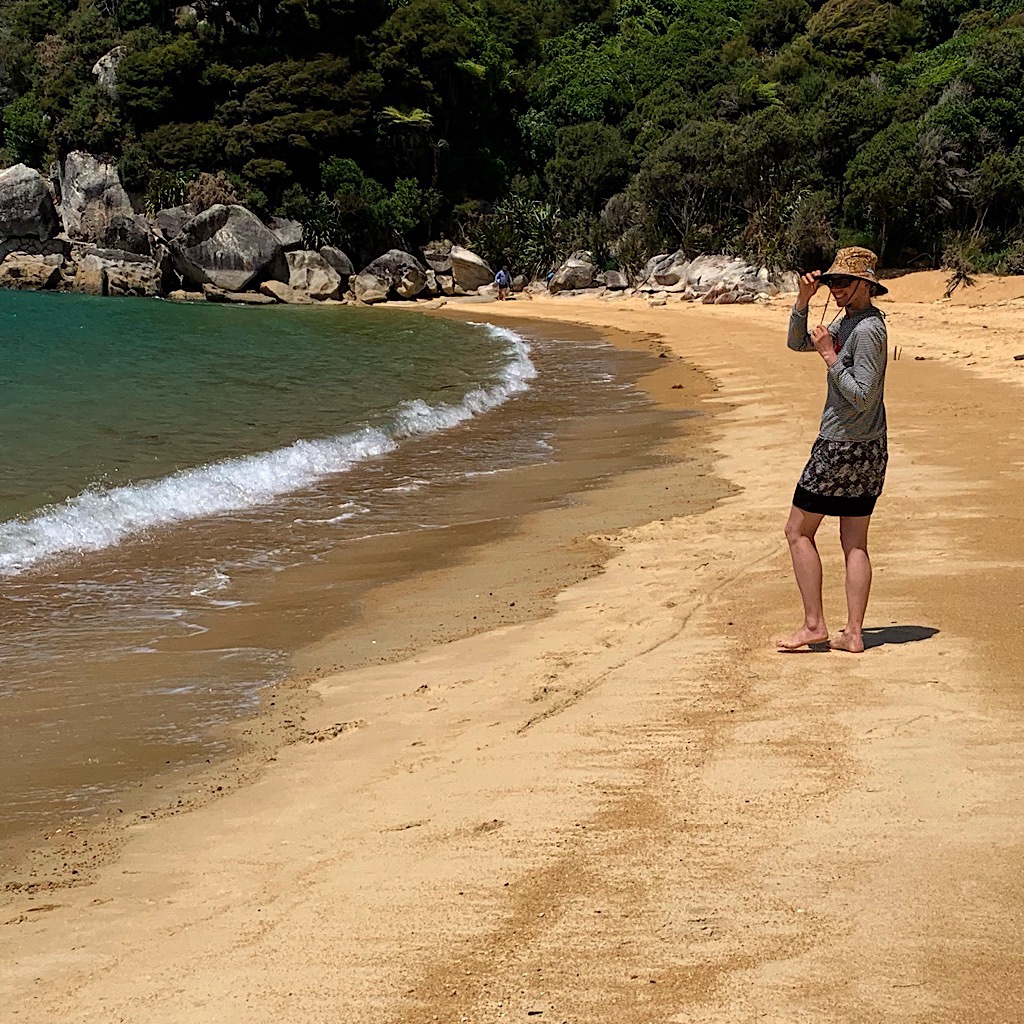 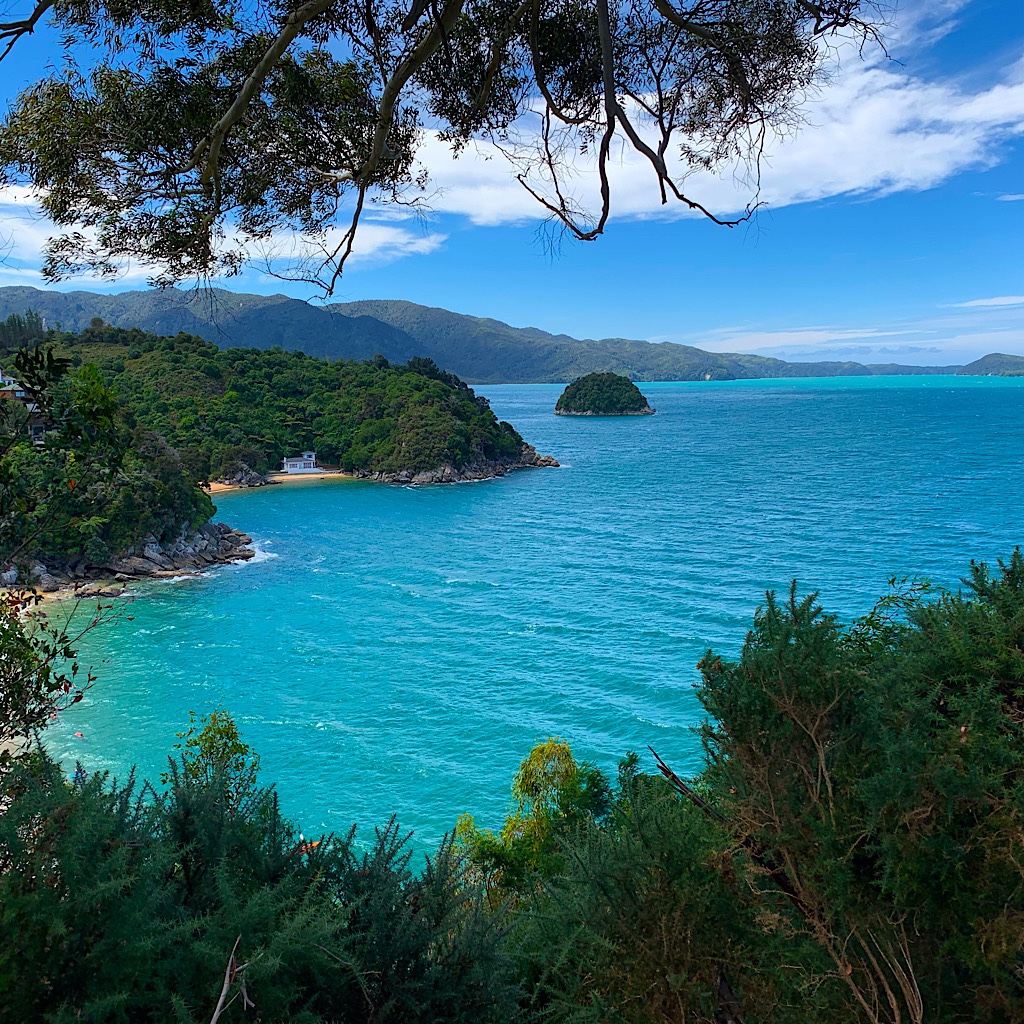 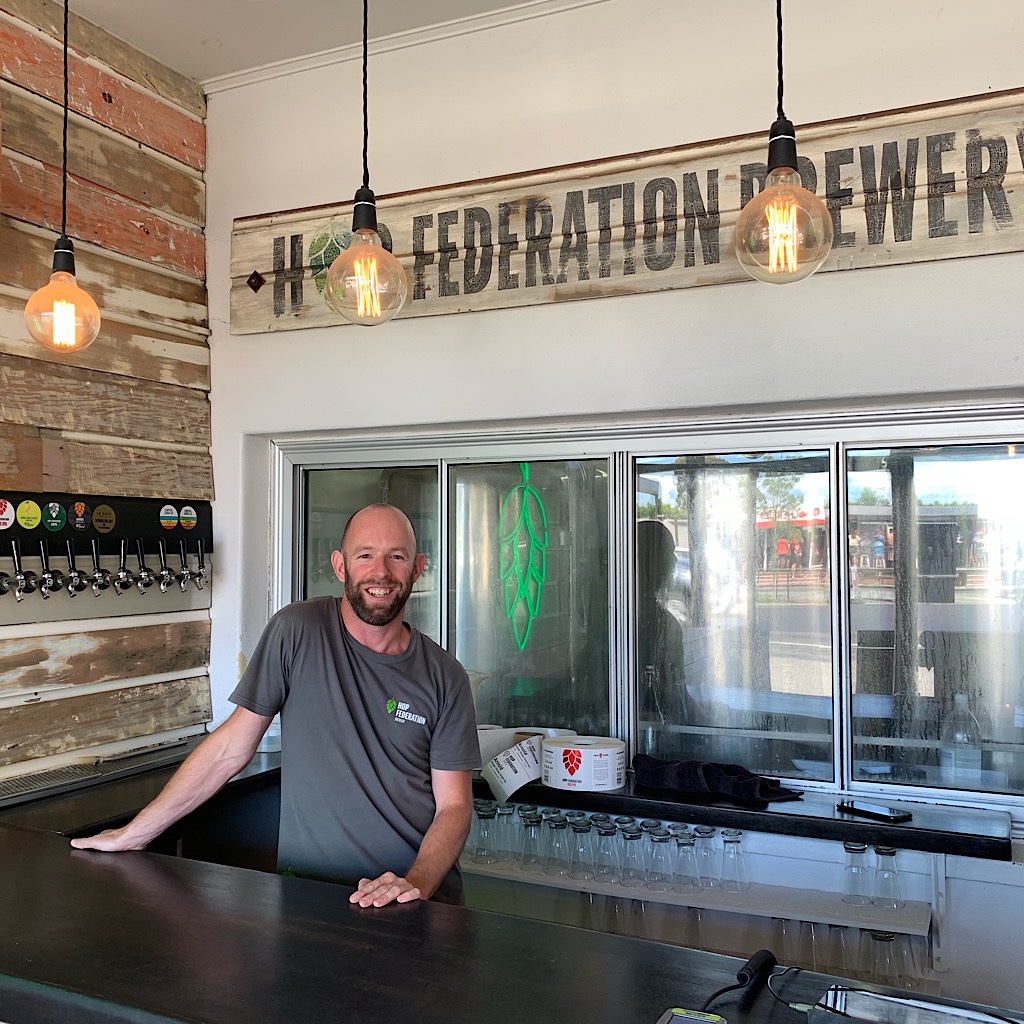 We grab a beer at the Hop Generation to share tonight when friends come for dinner. But first we meet them at the Nelson Centre for Musical Arts. Built in 1894 when locals were tramping with well-connected musicians and convinced them the colonial city needed culture. After the major trembler in Christchurch, it became obvious the auditorium needed earthquake proofing. At that time, Bob and the board convinced the council to add a modern section with studios and rehearsal space. It’s an attractive space – airy and light, decorated with local artwork.

I am so happy to see the space, only disappointed I arrive in between concerts. So we make music at home after conversation and food. Bob plays the kōauau, a Maori flute made of bone, which I try and immediately make speak. I am told that doesn’t happen often, but I feel a natural affinity and a deep stirring inside that I haven’t felt in a long time. It’s a desire to make music.

It’s quite the dinner party with singer Evie and actress Kat both performing for us, followed by a look at Wearable Art, a show that had its origins in Nelson. 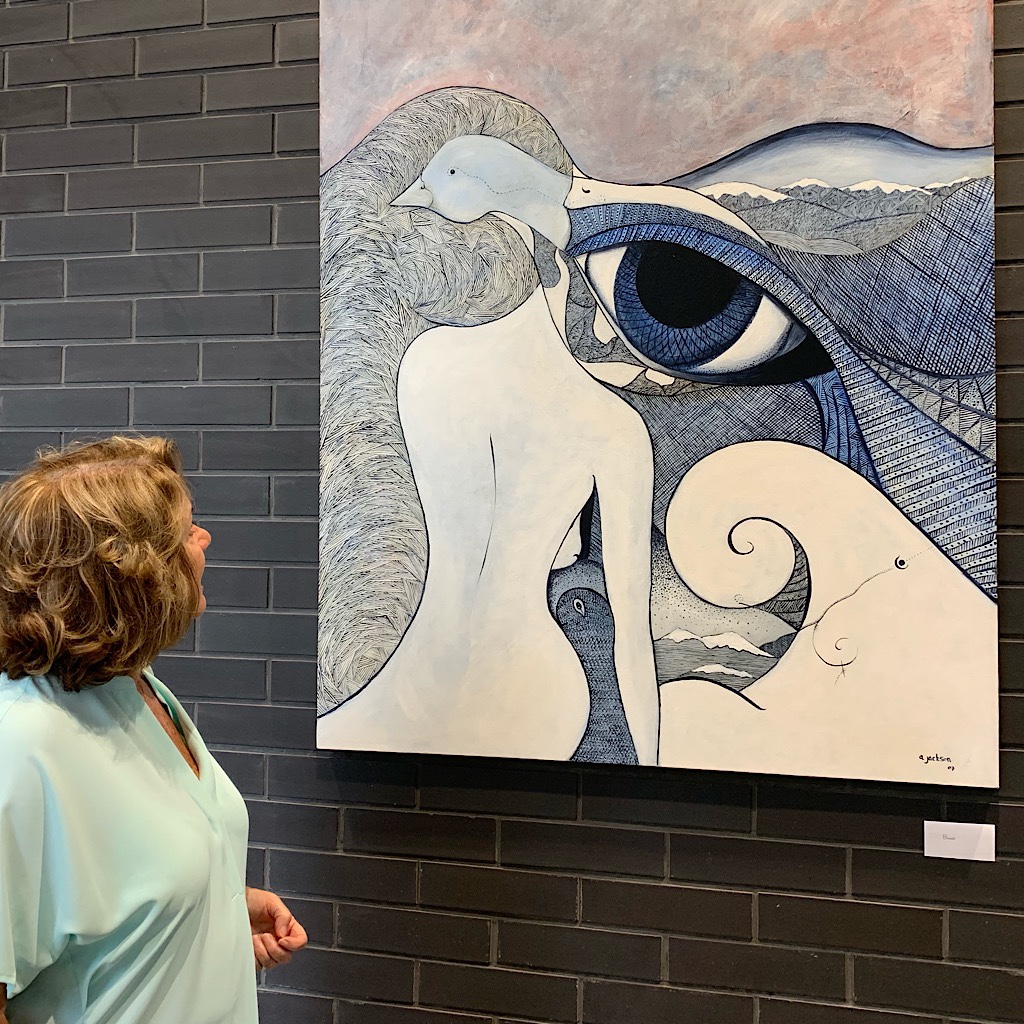 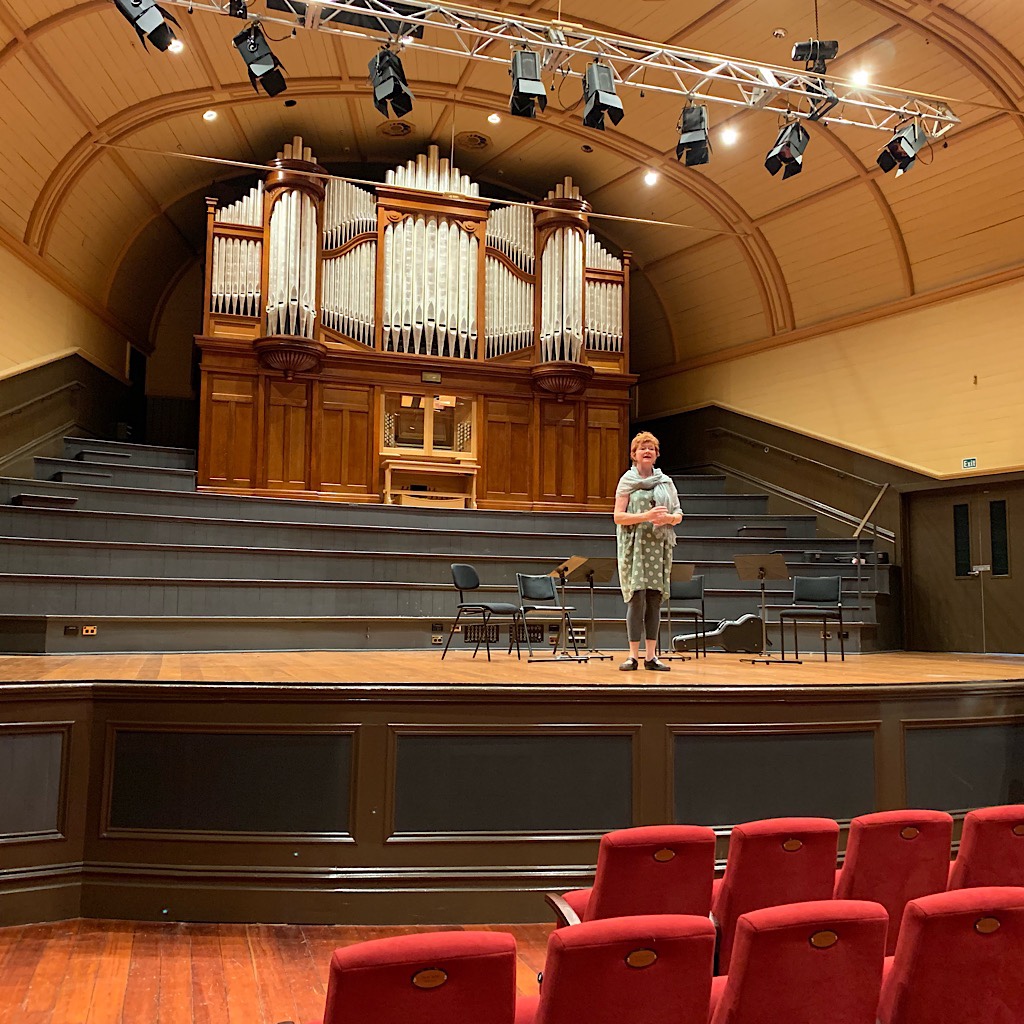 The day touched on the sensual – the breathtaking beauty of Abel Tasman, its sound, smell and even taste as well as its physical presence, felt by my feet in the soft, warm sand and by all of me in the water’s capricious embrace. This was followed by a deep instinct within me to make sound, an impulse that led me to become a professional musician and one still so natural and right.

It was a side trip day, one meant to be a rest and one meant to prepare me for my hike continuing tomorrow. These powerful and unexpected experiences went a step further, amazing me and enriching me.

I lay down ready to sleep now, happy, satisfied and humbled by all the gifts I’ve received on this adventure in New Zealand. I am grateful. 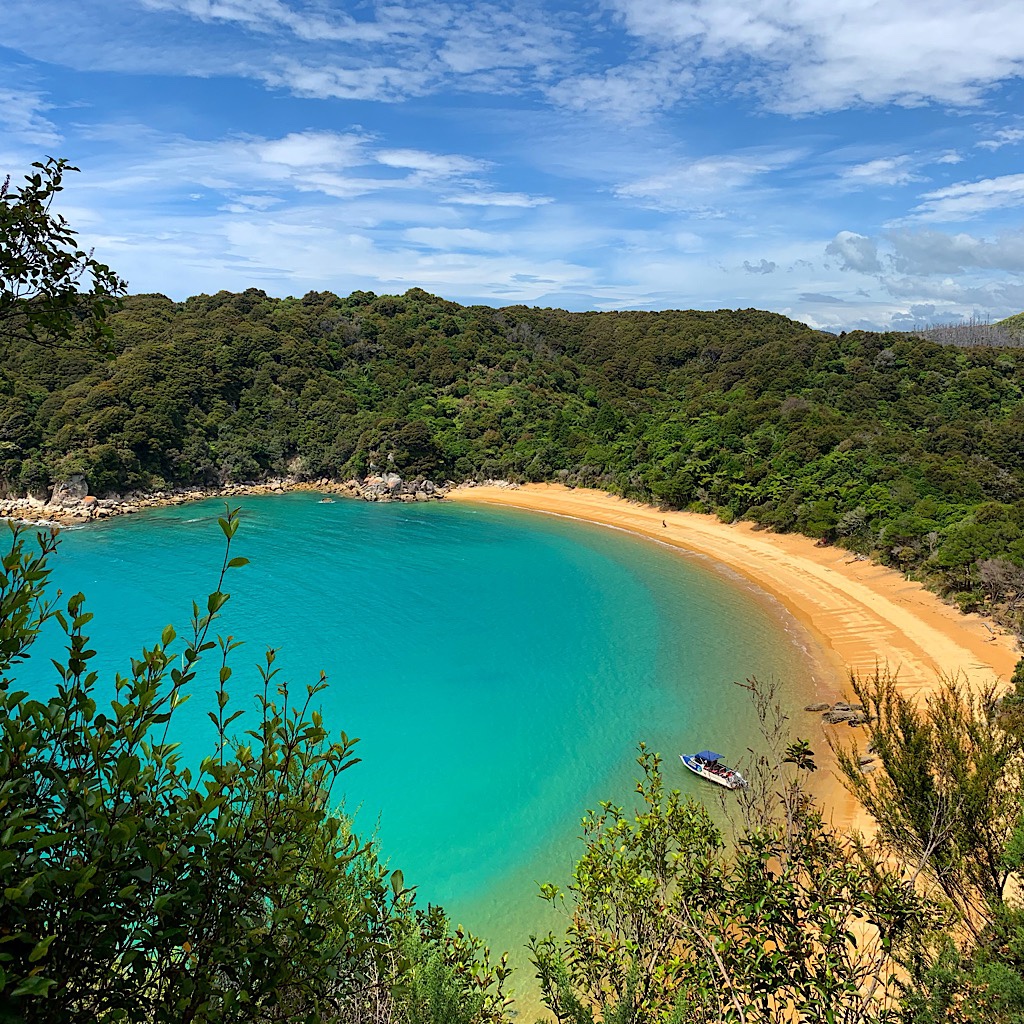 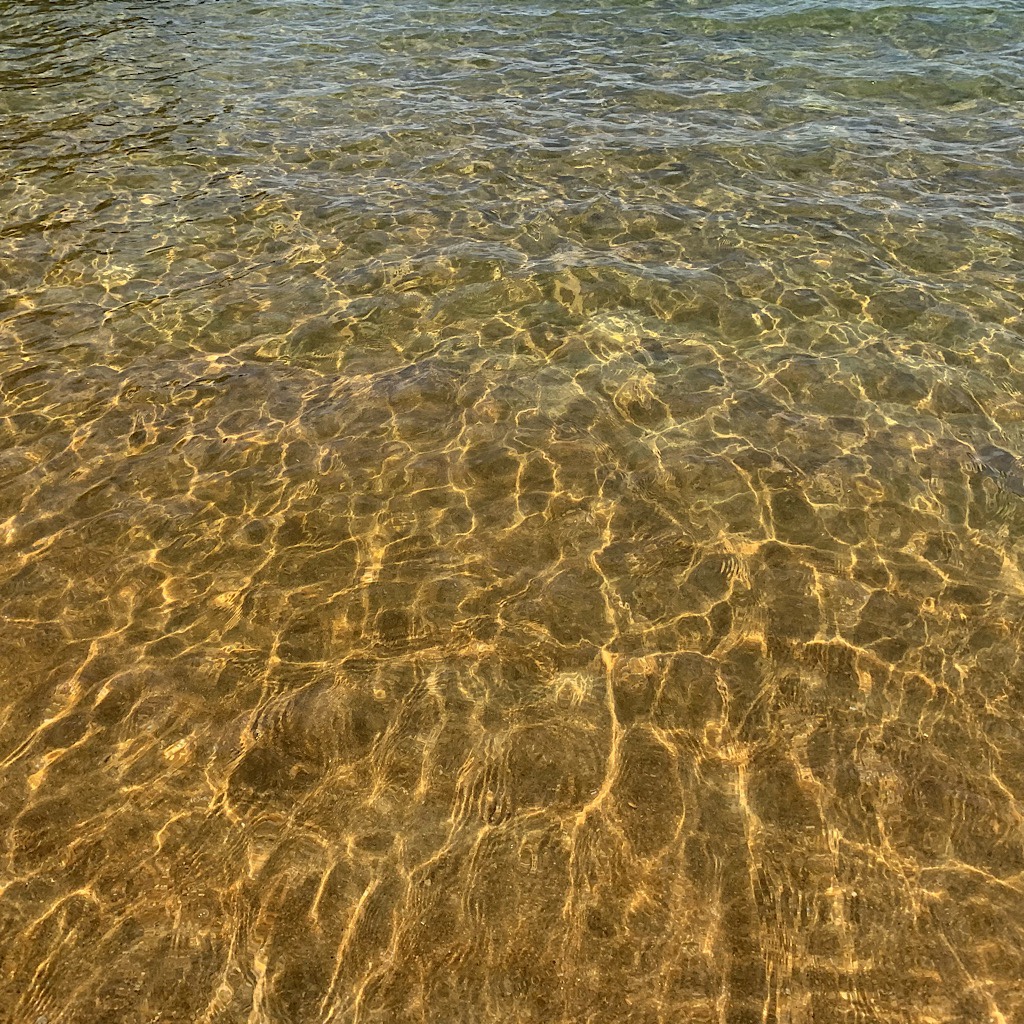 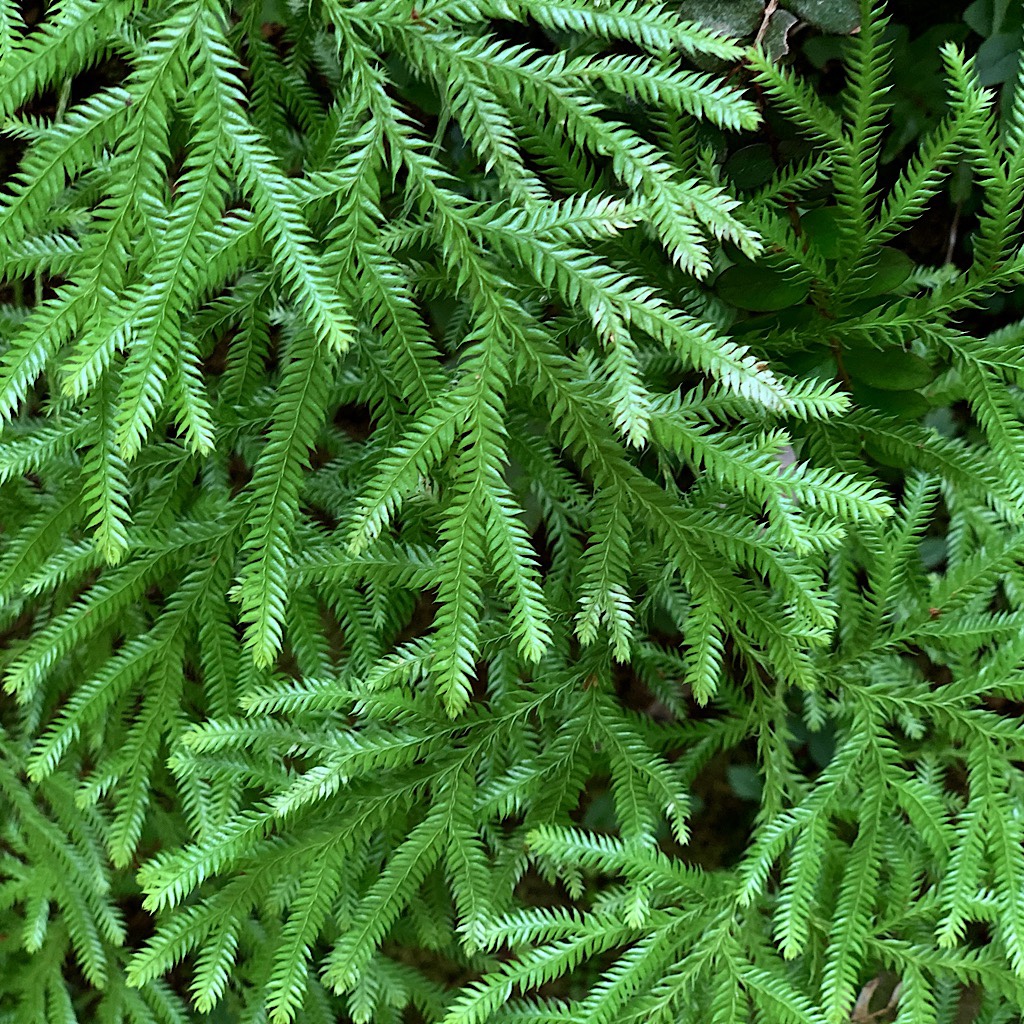