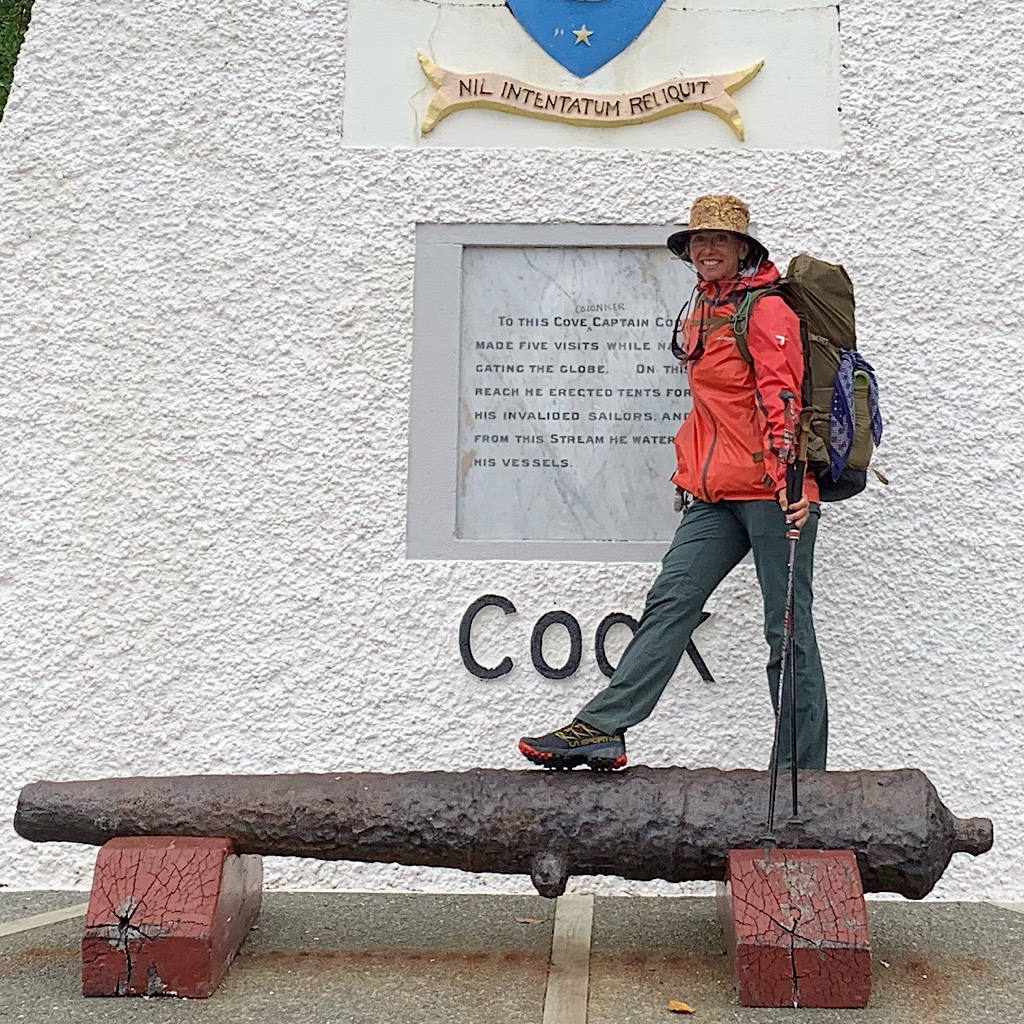 I needed to get up before 5 am to catch the ferry, but what a treat for Raf to take me. Seas are advertised to as ‘calm’ – just one meter swells. I run into the Czechs standing next to an American comparing shoe wear. I’m feeling stiff and secure in the new La Sportivas.

The ferry is enormous and I head right up to level six, wet in this gloomy morning. A sign alerts me to the rich bird life of Cook Strait – Sooty Shearwater that travel 64,000 km each year, three kinds of albatross that lock their giant wings in place and glide on the trade winds, gull, gannet, petrel, prion, tern, shag and penguin. 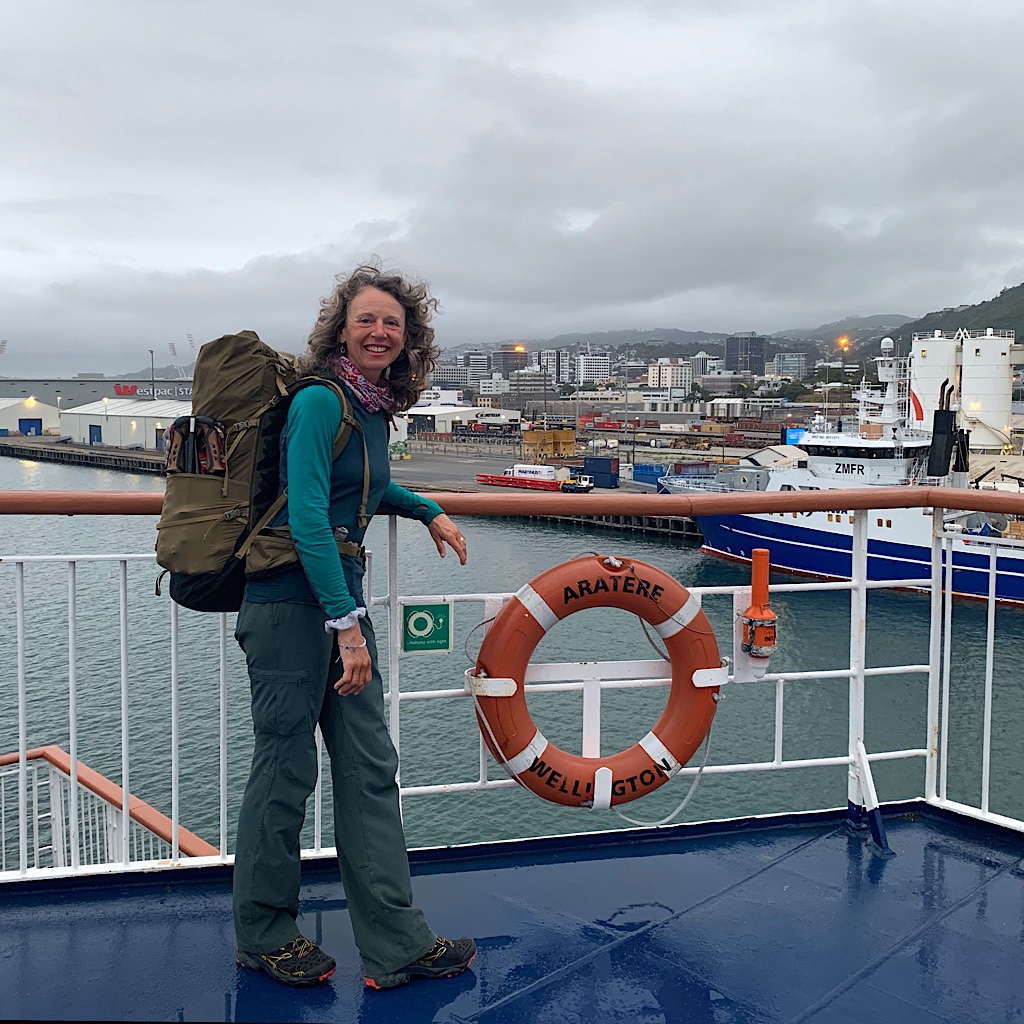 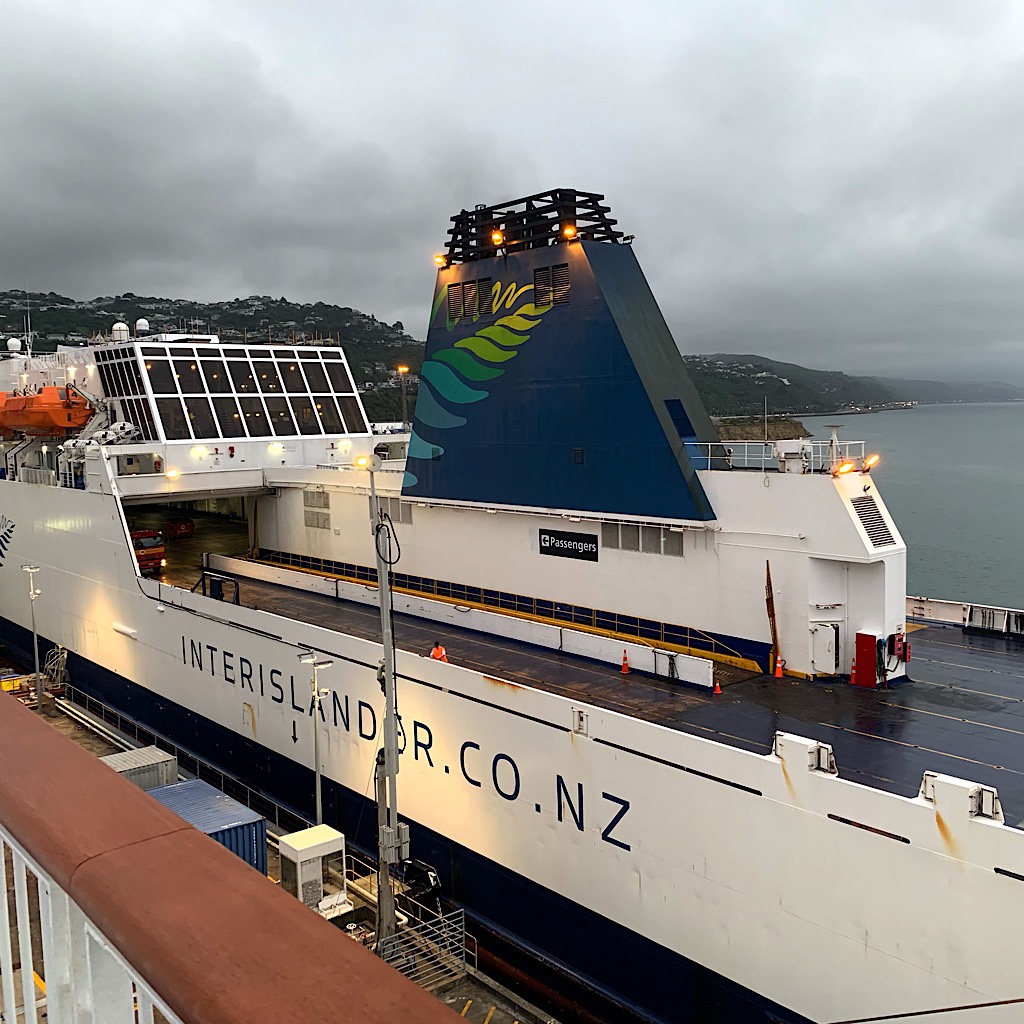 People stand alone or in little clumps on the deck, quiet, lost in their private thoughts. It seems fitting to leave on a more normal day – misty and overcast, the sea a gun metal gray. The South Island seems to be in the clear.

Well, not exactly. Wind driven drizzle pelts down as we enter the narrow sound, forested and steep. A whole new world.

Three drunks – and it’s only 9 am – take over the viewing area, so I move away and talk to a German woman traveling alone about global warming.

In Picton, I pick up my pass to walk the Queen Charlotte track and reserve a place on yet another boat. The public restrooms play ‘Memory’ on the SI. 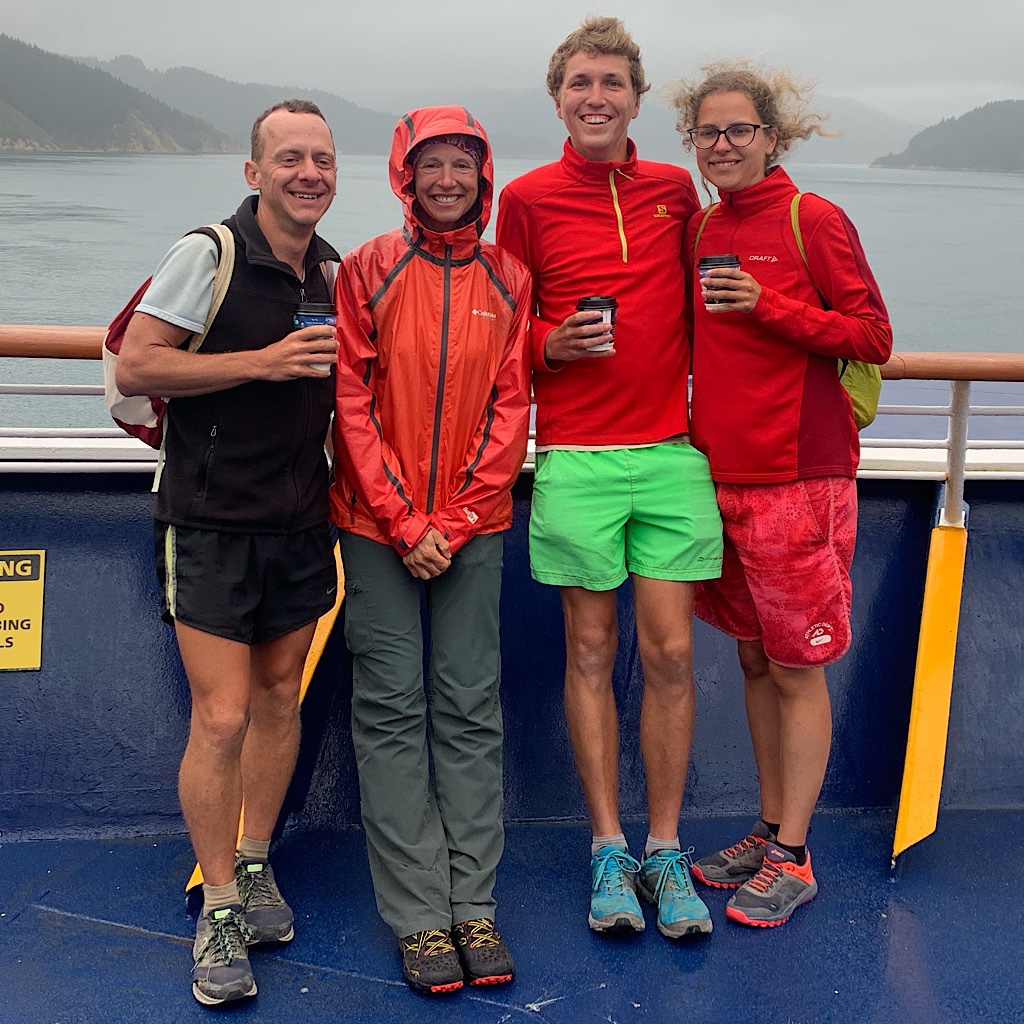 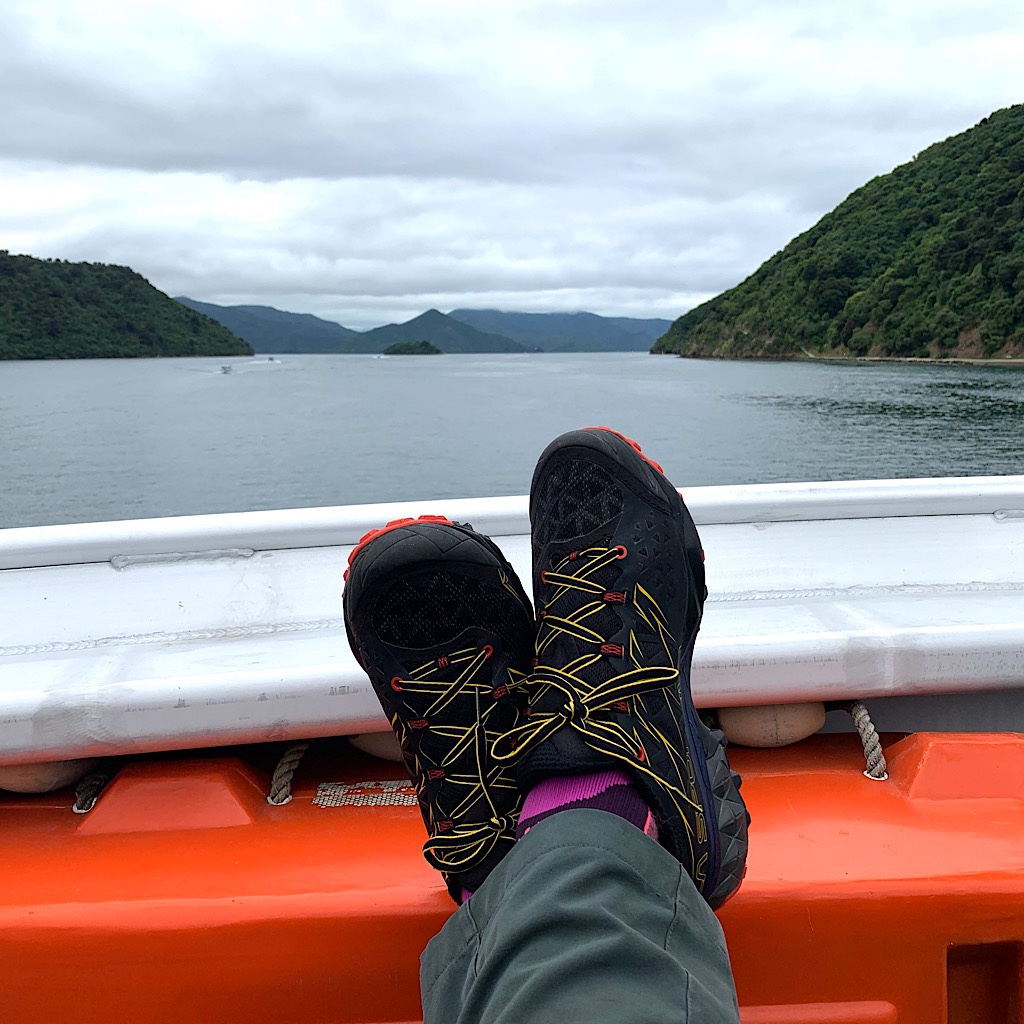 I get a front row seat on the top of the boat next to a couple from Christchurch via South Africa who tell me they left when the ANC came to power as ‘it can never work.’ Aghast, I don’t press and instead discuss the weather.

We stop at a few million+ dollar homes to deliver goods. The hillside is filled with dead trees, sentinels of American pine being poisoned to allow the native bush to rejuvenate.

The Beachcomber is a mail boat with free commentary – and an attitude. We hear about the asking price for luxury ‘baches,’ how salmon farmers and seals get on, the clearing of islands’ introduced predators to create bird sanctuaries, as well as who’s stayed at the Bay of Many Coves resort at $4,000 per night. I’m not sure just how much hiking I’ll get in before it rains. 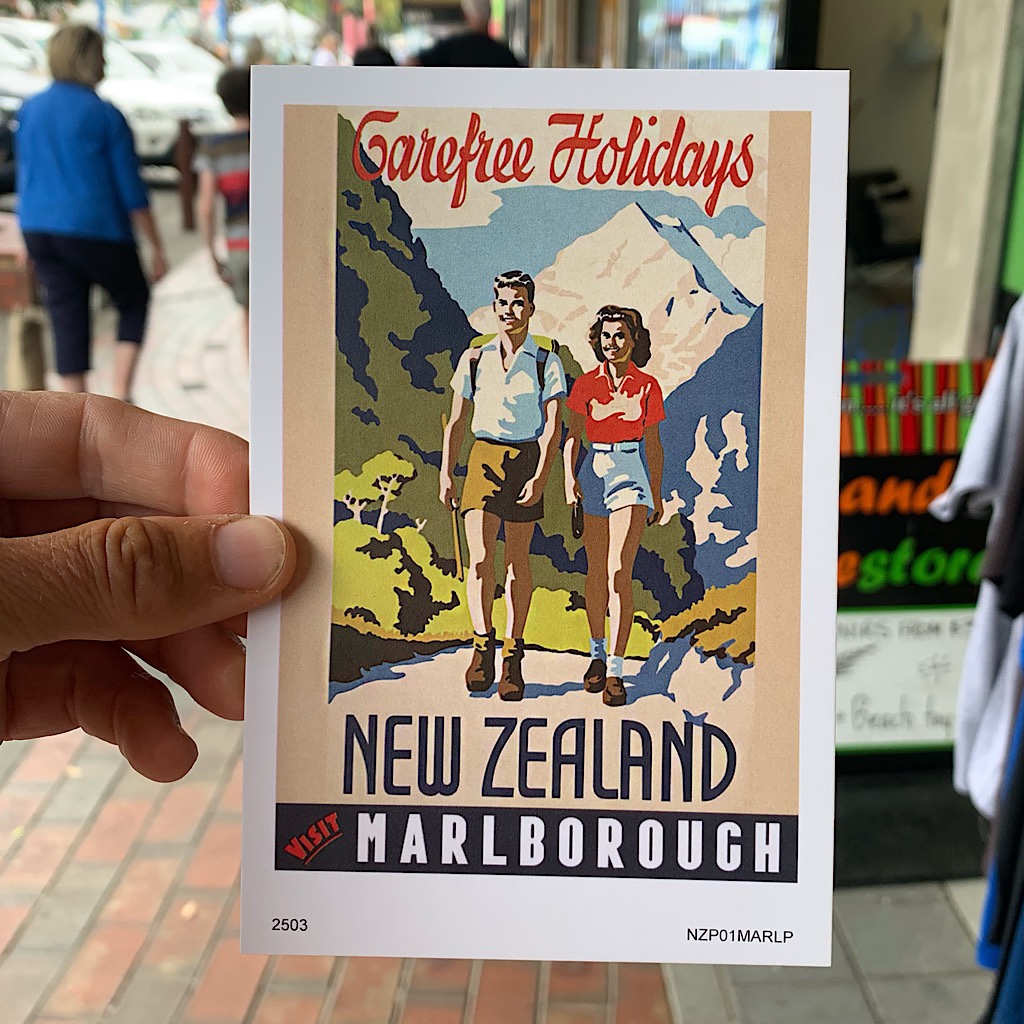 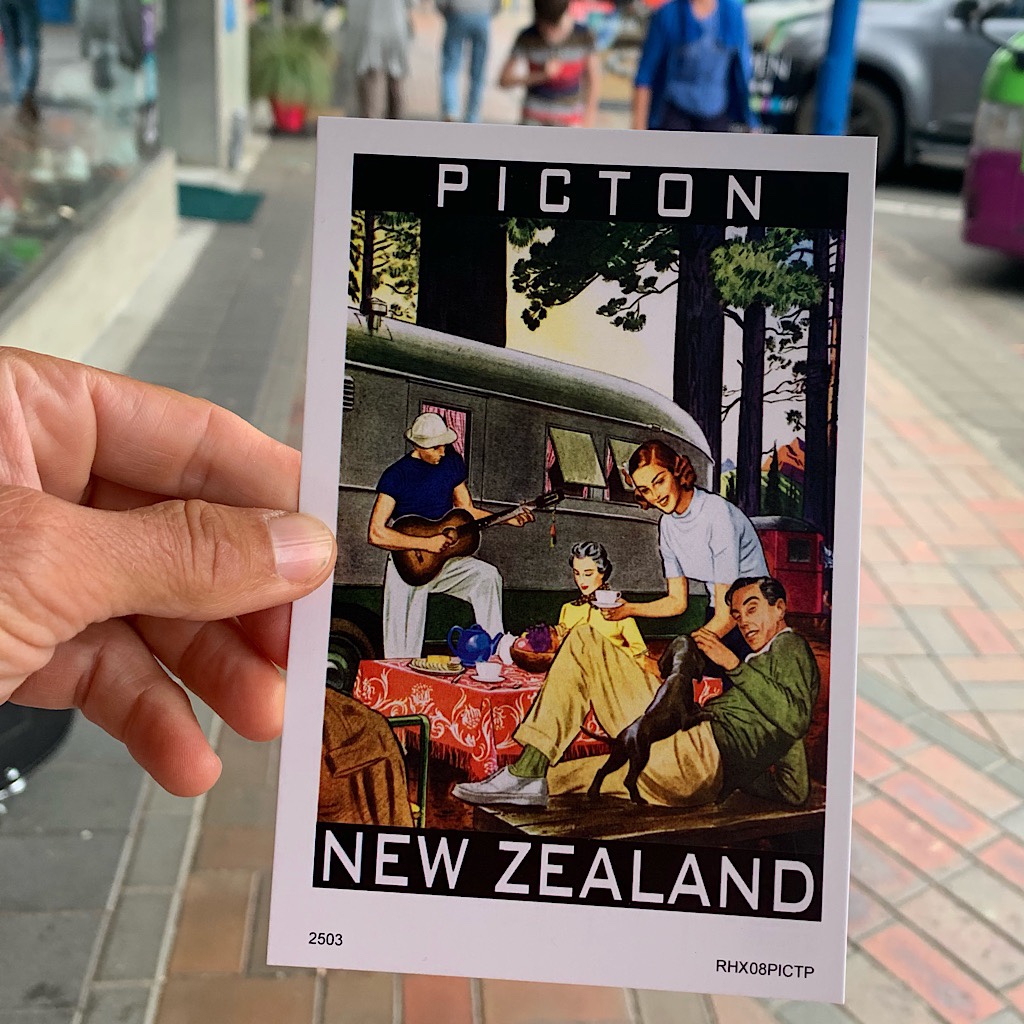 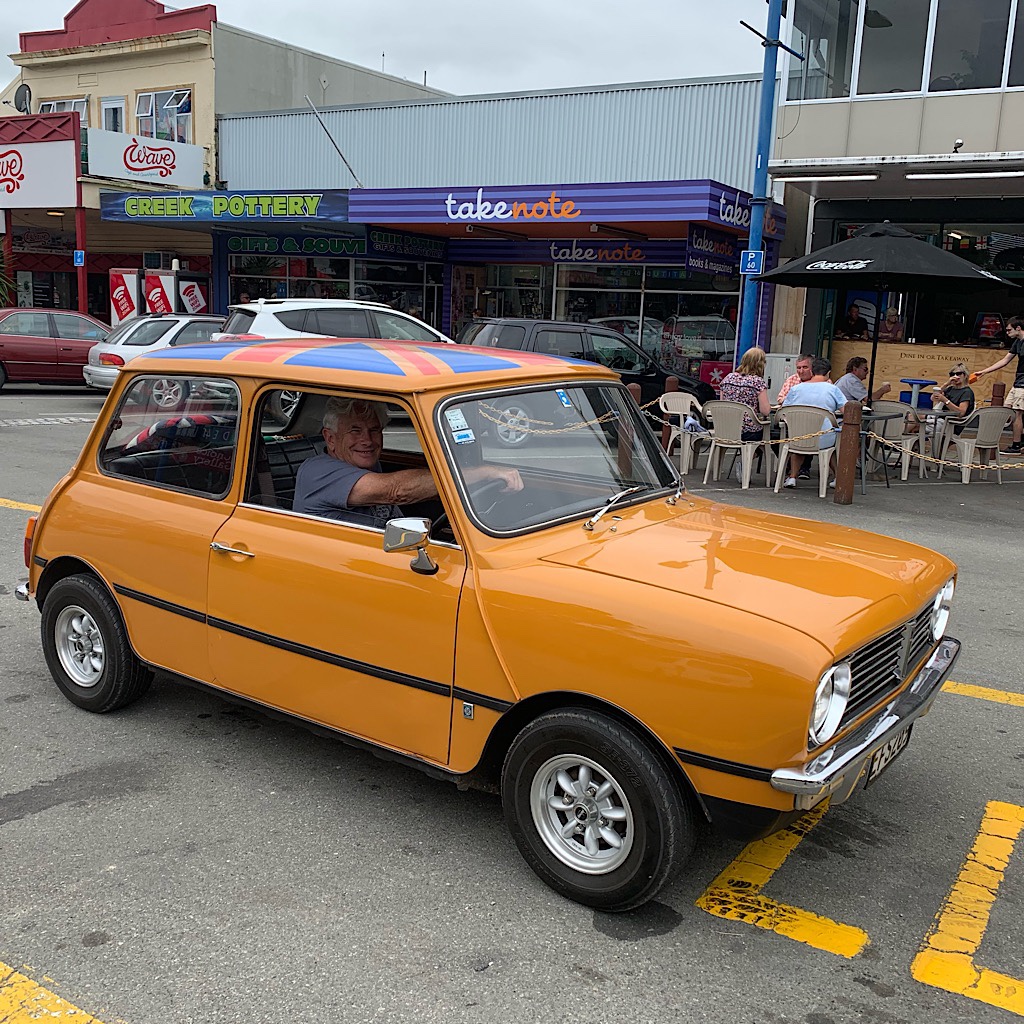 We finally arrive at Ship’s Cove where Captain Cook anchored, ran up a hill and claimed this inhabited land for the crown. A Dutchman, Abel Tasman, already named it a century earlier after a place in his own country., but then headed home leaving the island ripe for the English.

The first thing I notice are the cicadas and their almost deafening sawing and clicking. I heard nothing like it on the NI, and here, it covers completely the birdsong. We’re so late starting, this big gang of TA hikers – I meet Koen and Vera again, and some new people – plus many doing only the track. At first I think a short afternoon is in order. But I have my eye on a site further away and the track is so good, and I’m feeling good, plus it’s light until 9, so I shoot for it. 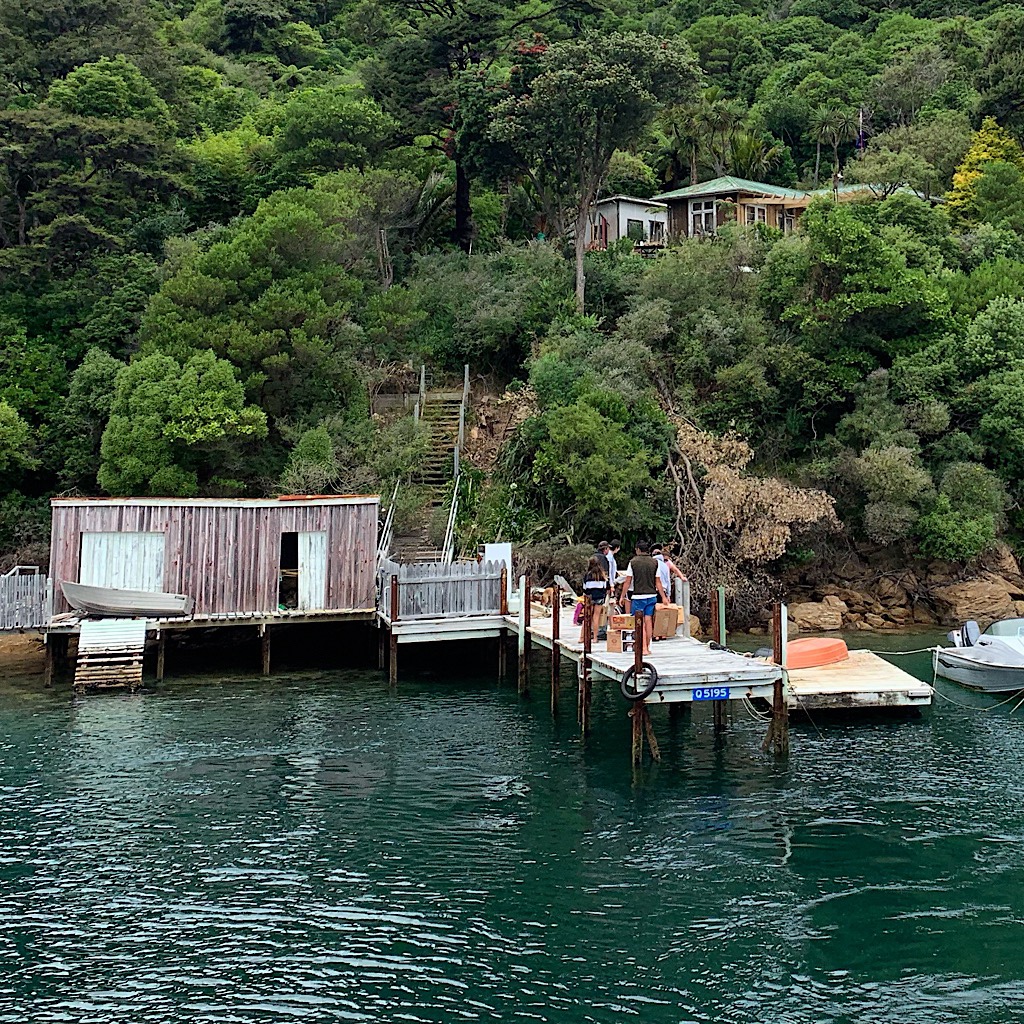 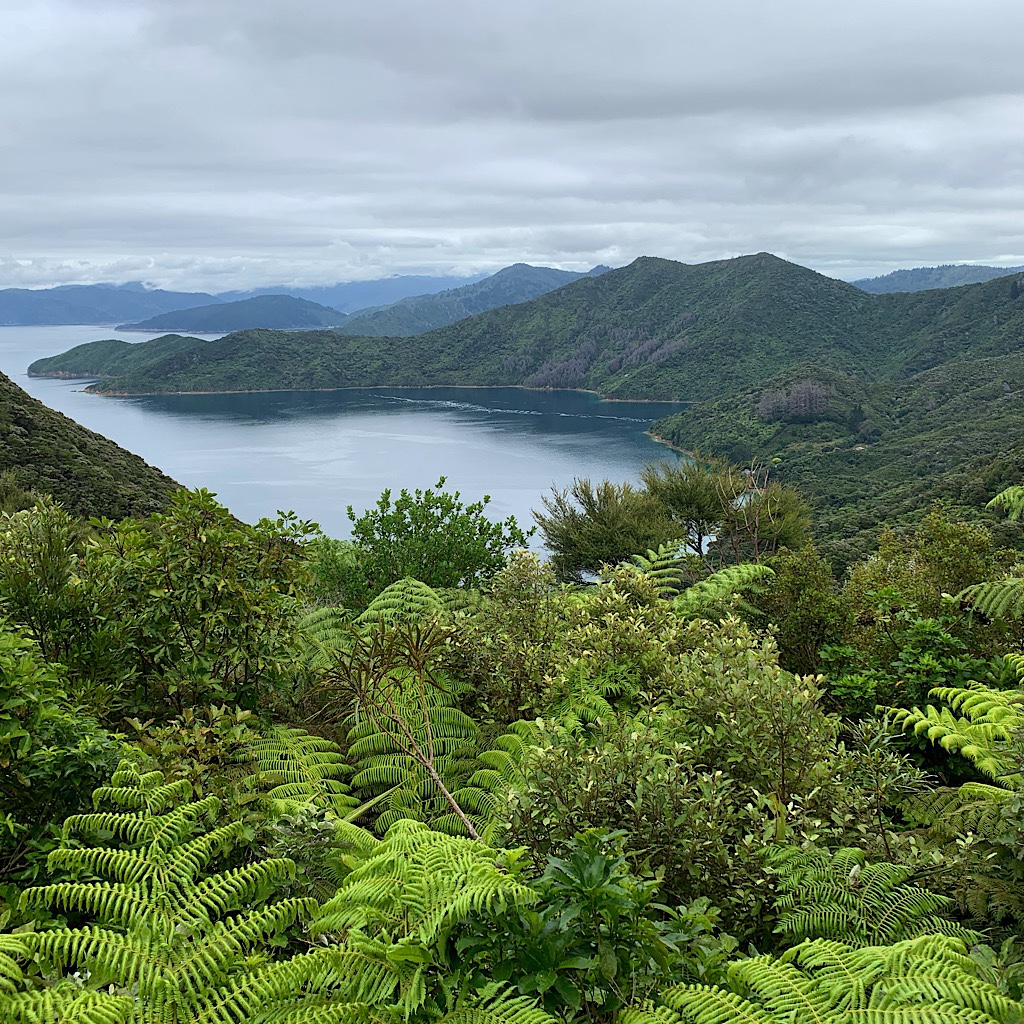 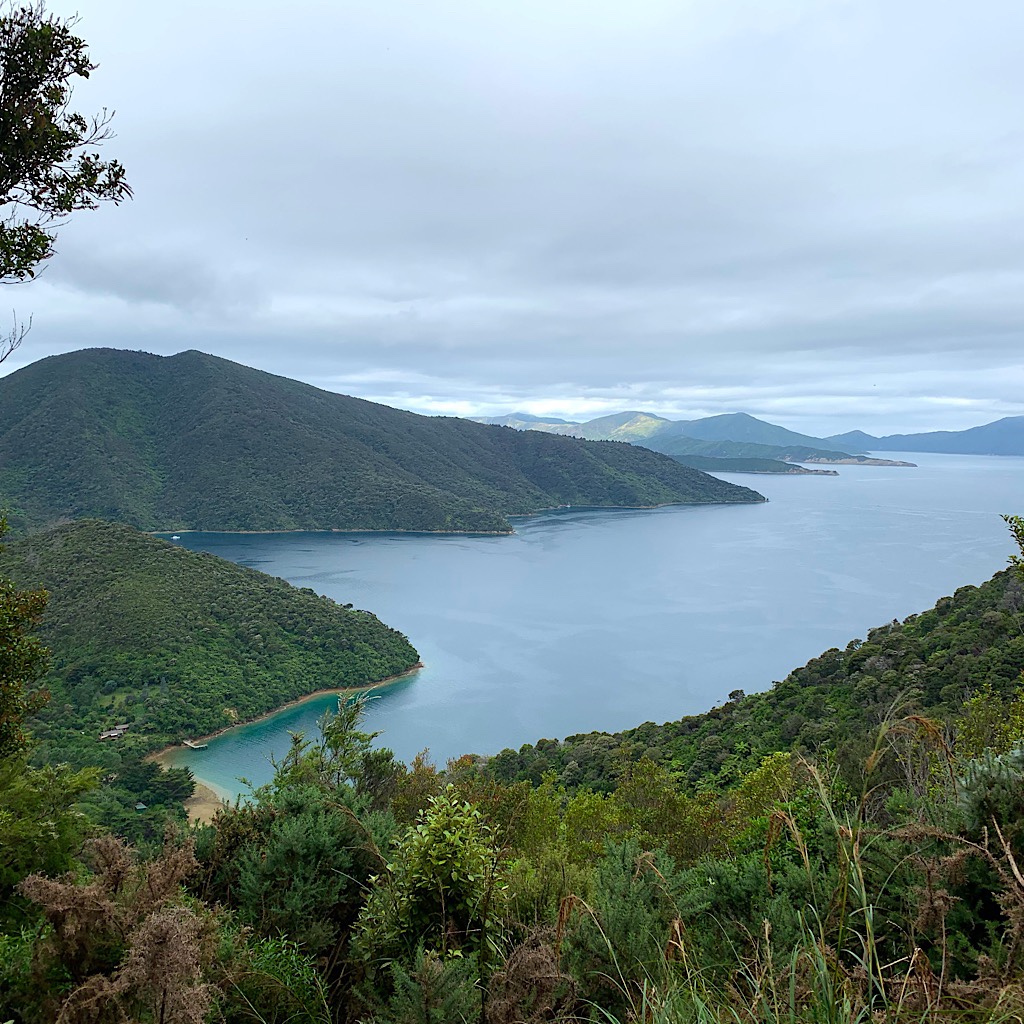 As do John and the Czechs. They move fast, straight uphill to a view of these tight, twisty bays and hilly terrain. I move well enough, my tread gripping again.

In time, I’m walking alongside and John and I chitchat about music and Boston and the four long trails he plans to walk in a row. The three will go much faster than me and seem mostly focused on their speed, so none show interest when I break off and go up and off trail for about two minutes to see what is thought to be the oldest rimu in all of New Zealand. In 1903, a forward-thinking man saved this patch of bush and it was bequeathed to the people. He saved a tree that’s tall, fat, shaggy and 1,000 years old.

I finally catch up at the private camp where Tony – pronounced Tiny in Kiwi – places me on a terrace looking out to the very subtle sunset over Endeavor Inlet with my own chair swing, then races me down to the beach where we take off our shoes, roll up our pants and wade in on barnacle-sharp rocks for mussels. I take about 20 back up and boil them in salt water, opening to a soft, yellow bit of meat, absolutely out of this world at the end of this day, as the cicadas give up and the morepork takes over. 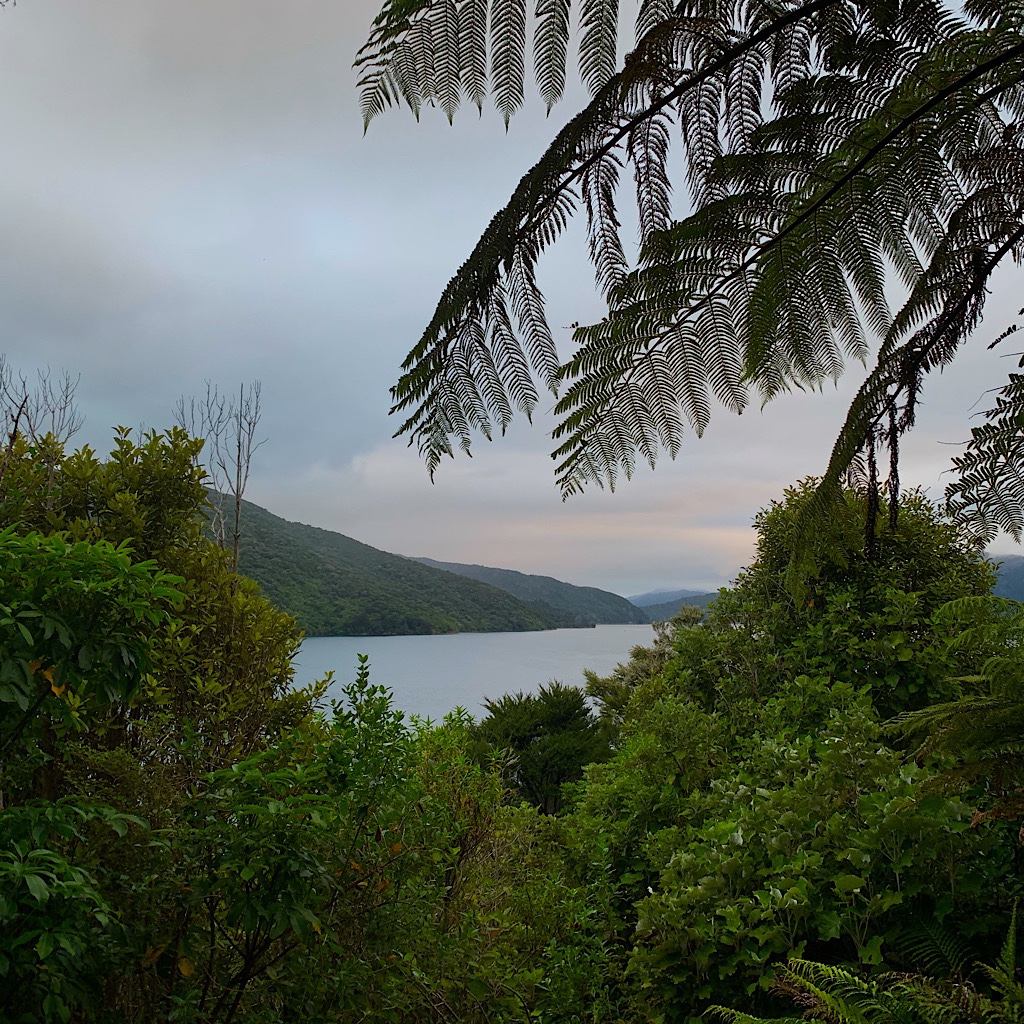 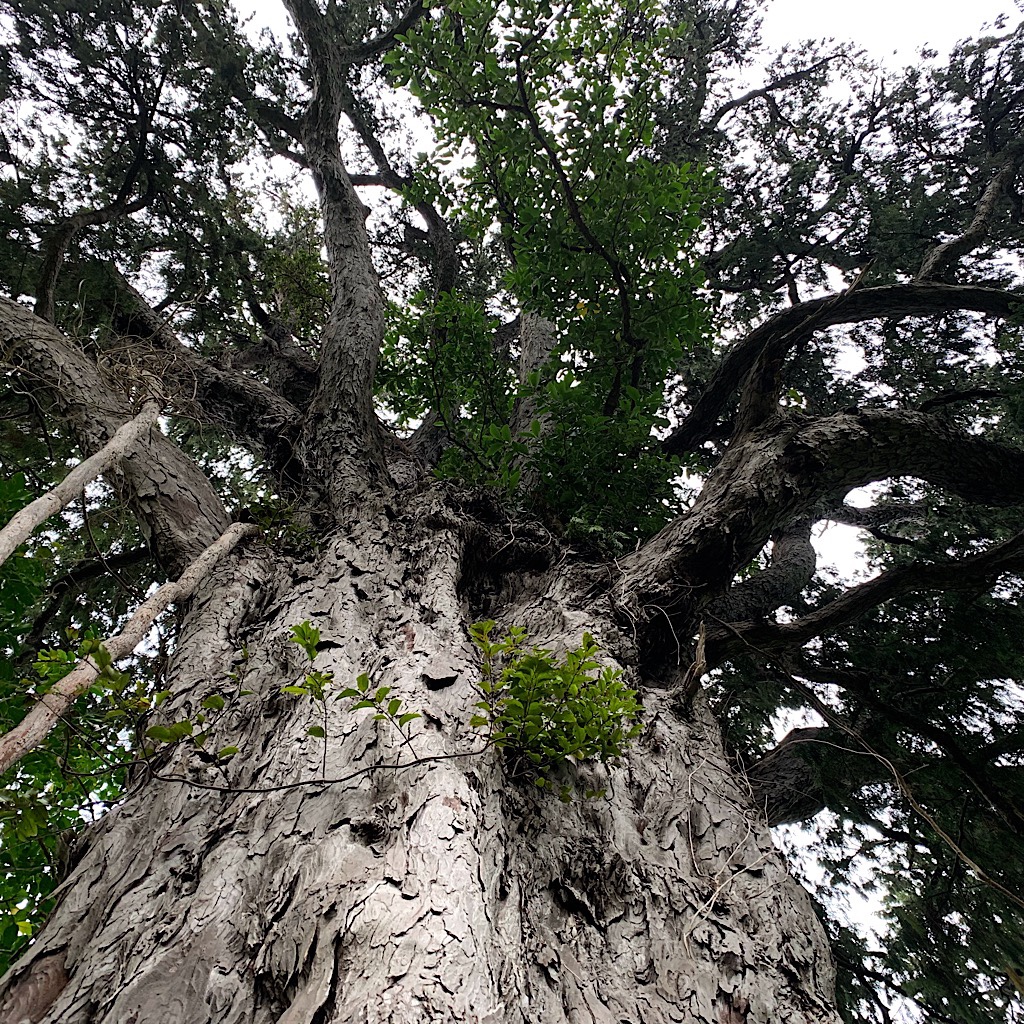 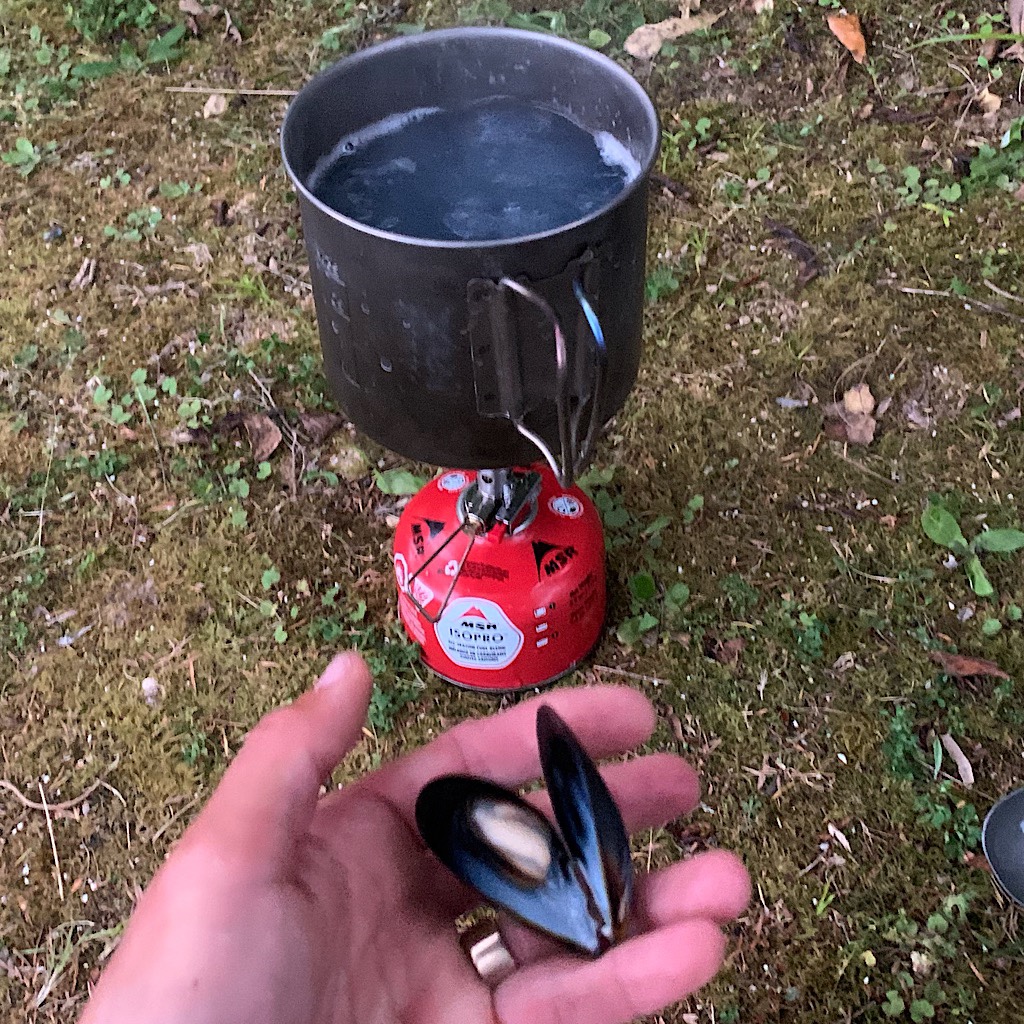 I felt fear again today, just as we emptied out at the cove to set off. Things felt a bit confused at first and I was unsure how far I’d go before dark and if I’d hike together or alone. It reminded me of the early days of solo backpacking, when I’d crawl in my tent and feel too scared to close my eyes.

Those days are in the past, and maybe this trail will help me overcome this fear of – what exactly, I’m not too sure. The unknown? My ability? That I’m prepared enough? It helps that others came this far, and I imagine I will see TA walkers for much of the south island. Though I somehow find myself in between wanting to be with people and wanting to be alone, and solitude is forcing me to come face-to-face with this fears.

At the moment, I am tired and relaxed seeing the last of the twilight from my comfortable perch. The air is sweet and tomorrow promises sunshine.