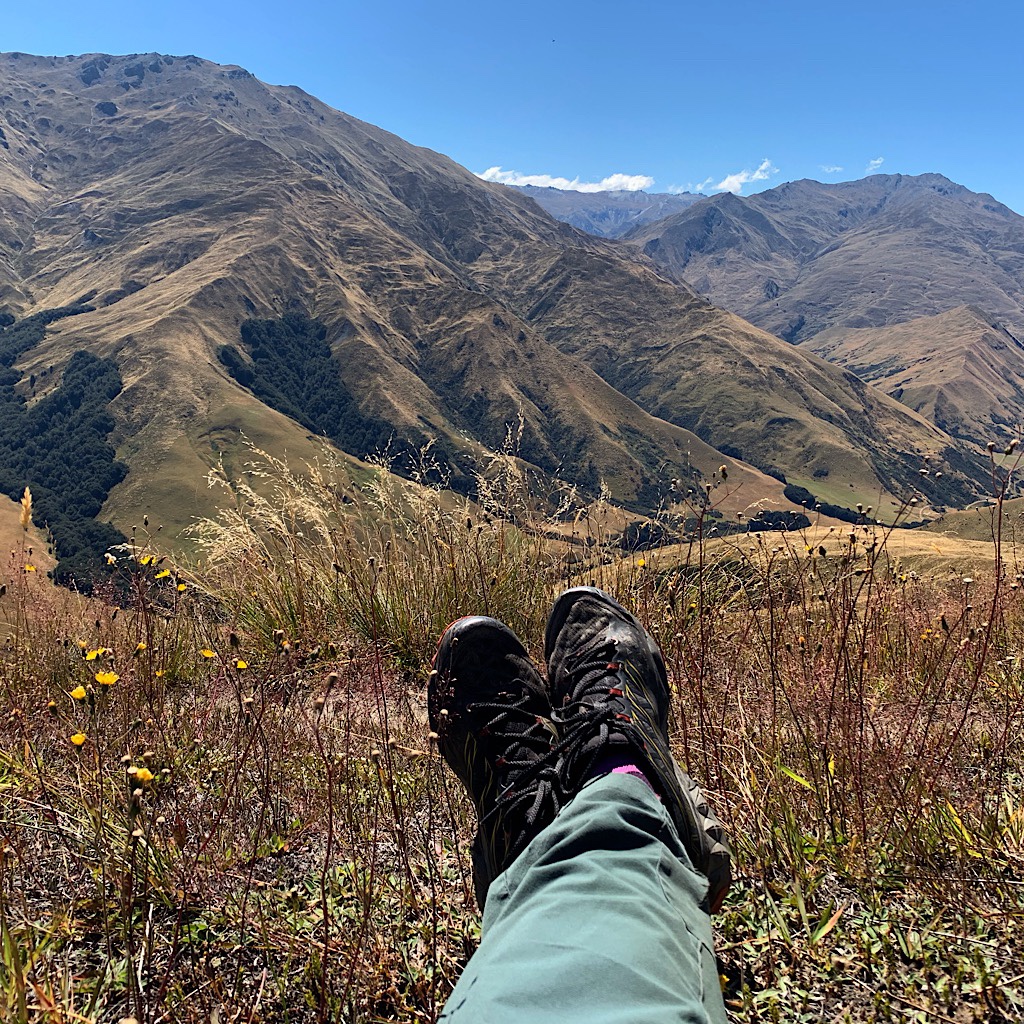 Walking is the natural recreation for a (wo)man who desires not absolutely to suppress (her) intellect but to turn it out to play for a season. All great (wo)men of letters have therefore been enthusiastic walkers.

I’m awakened by one of the Czech’s alarms. He has to scramble down from the top bunk to turn it off as it’s his phone and on the table. I’m surprised by the tune’s sweet nature.

Clearly an accident as he crawls back in his sleeping bag and, even though getting light, everyone else just rolls over for a bit more rest.

I eventually emerge and pack to go, the very sparse clouds turning pink. The morning is chilly and I’m ready for three big climbs – and descents. 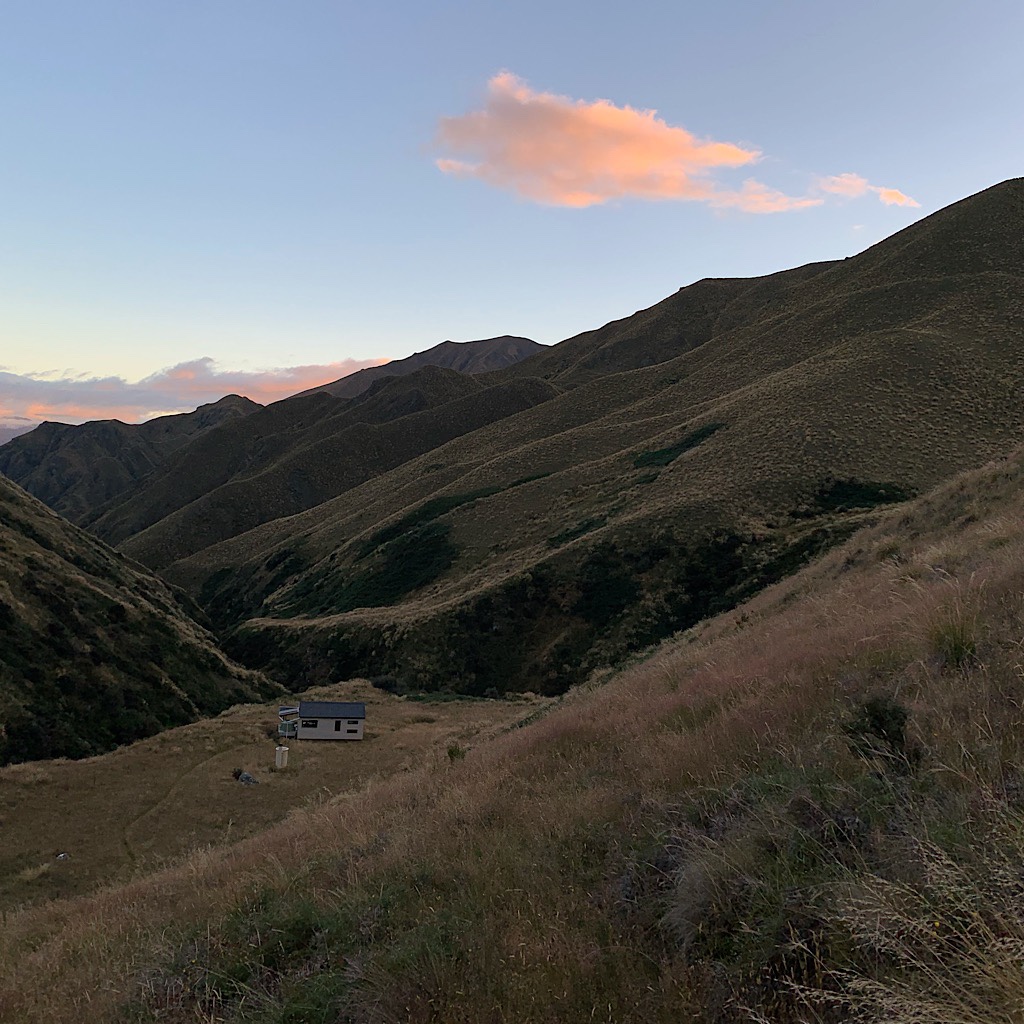 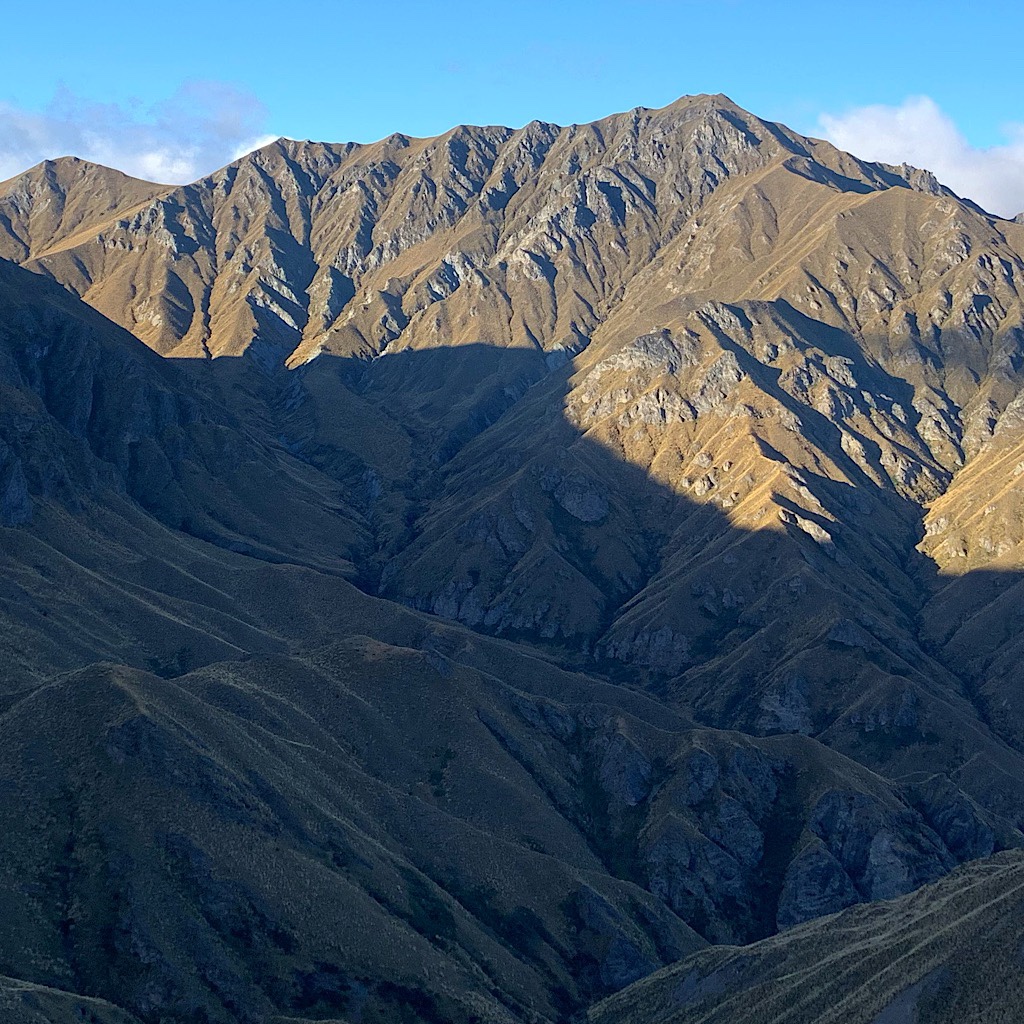 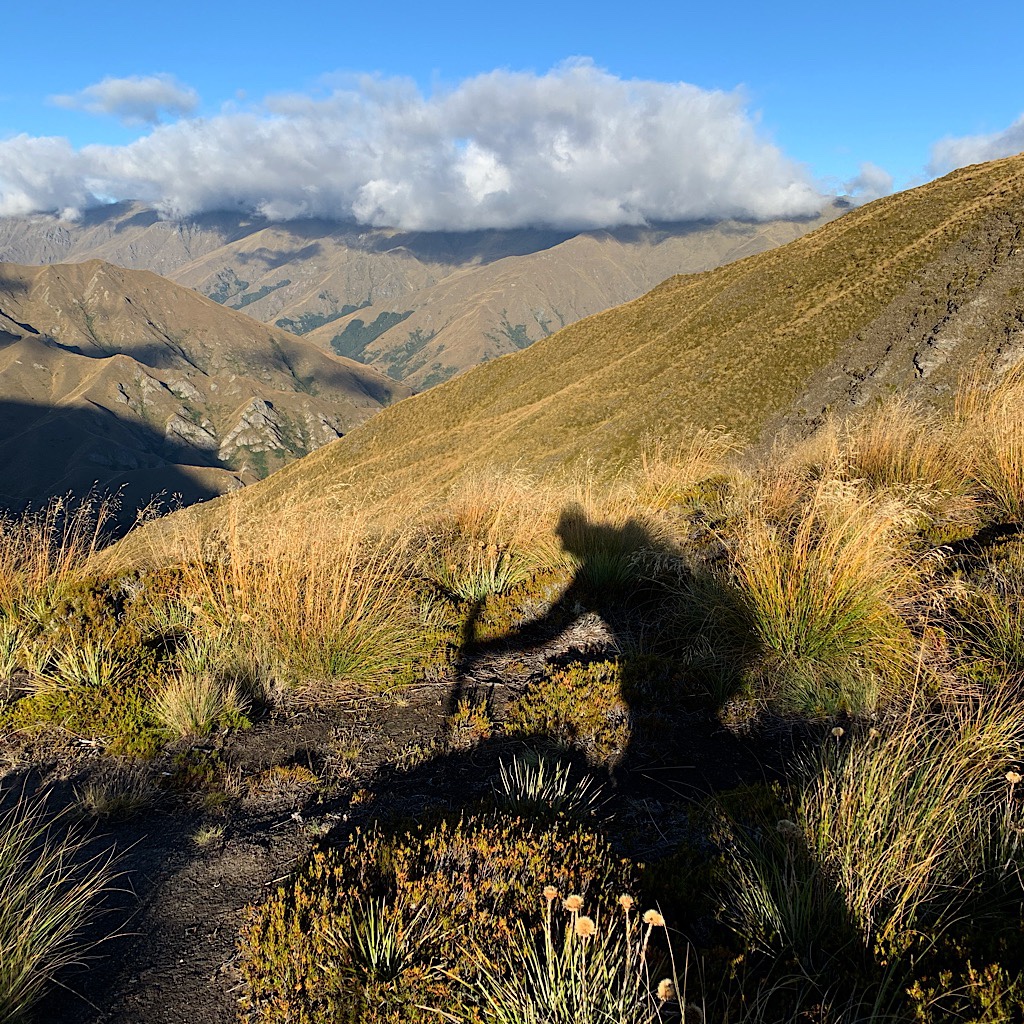 This will be the last ‘alpine crossing’ of the trail. NOBO’s seem the most excited as they have not yet had much, if any, altitude. I feel mixed emotions, ready to wind things down but loving being in this wild solitude. I will add the Routeburn Track, a great walk that has lots of elevation, but it will have loads of hikers sharing. This place is magical, lumpy peaks surrounded by deep rocky canyons and dressed in golden grasses with beech forests working their way into the damp, spring-fed crevices.

It’s up and up right from the start towards Jack Hall’s saddle which I’m informed is 1,275 meters above sea level. Isn’t that the standard, I wonder. The contrast with my side trip to the Rob Roy glacier is shocking, a wide, heavily used track with this narrow, tussock-filled suggestion of a route, but I must say, much work has been done here. There’s evidence of weed whacking and cutting back thorn bushes and overgrowth. I am impressed. The uphill is still exhausting, but I feel such ease here compared with past days with no evidence of any trail at all. I have been warned a few days of that remain.

Last night, George and David and I spoke of the condition of the trails and my frustration with them, longing for some semblance of maintenance. David is section walking over several years, so we don’t share that intensity that comes from scores of days in a row walking hard. But he offers this thought – when you walk something so rugged, you have the feeling of being closer to nature, closer to this mountainous area in its natural state. George added that the challenge is less walking where everyone else has gone and the track is heavily-trampled. Here, he feels the reward is greater. 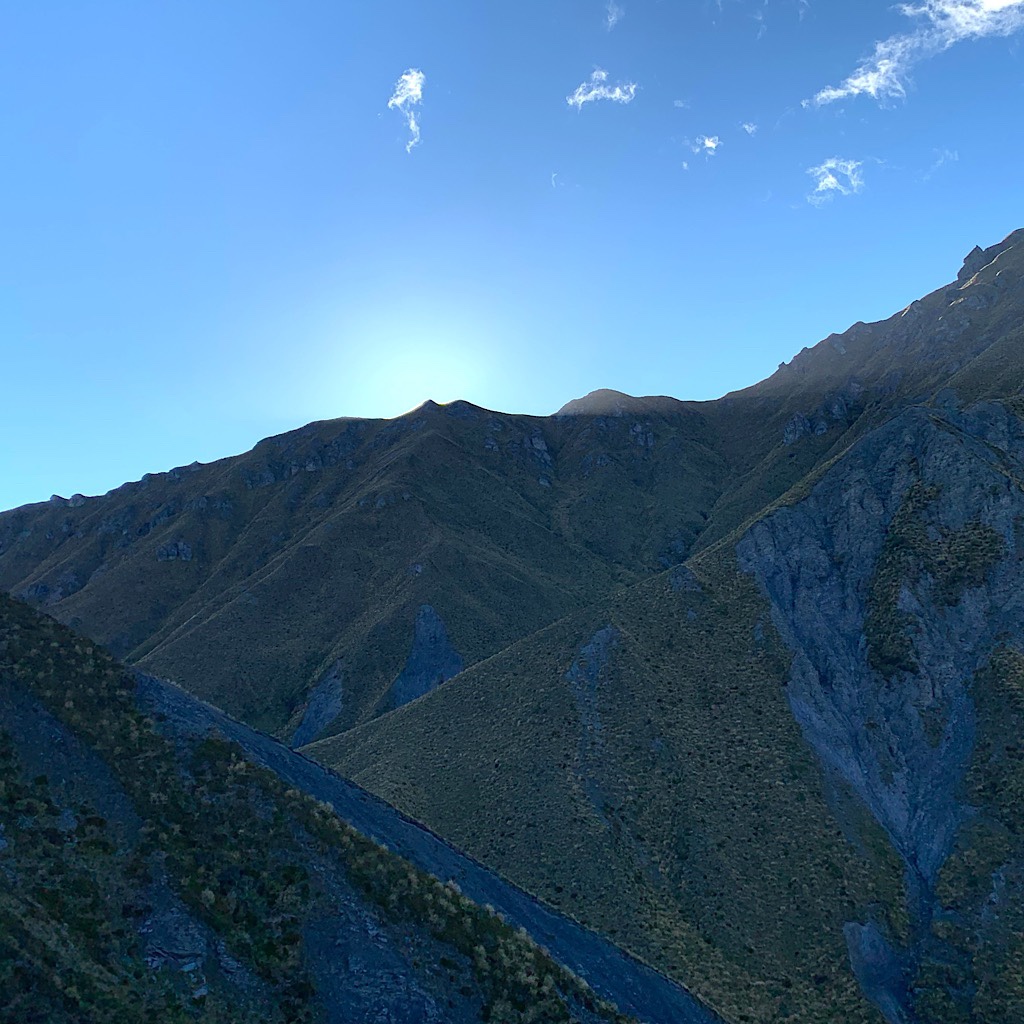 Of course he still needs to walk the coming tough sections as he moves north, and then we should check back in to see how that philosophy is working for him. Though I do have a mind to adopt this attitude. It’s one thing to walk 3,000 kilometers, but that much on this trail is a pretty big achievement.

The trail sidles high above the creek before dipping deep to cross a side creek tucked into a gully. It’s not very far to the last hut, so I take it slow and savor the journey down to the middle hut, Highland Creek, and spend an hour enjoying the sun while I make a second breakfast of noodles, tea and M&M’s. The view is stunning from the porch and this hut is new and clean, everything a hiker needs. I laugh a bit thinking that’s great, but the hut is a bit too generic and without character. Still pretty nice to ‘glamp’ inside with screens on the windows, a faucet and a long drop.

The Quebecois arrive just as I’m packing up. Our group of nine gave me good energy for today and I take pleasure in being in such a good mood, reminding myself that when I’m not, to know it will pass and I’ll be back in this good space soon. 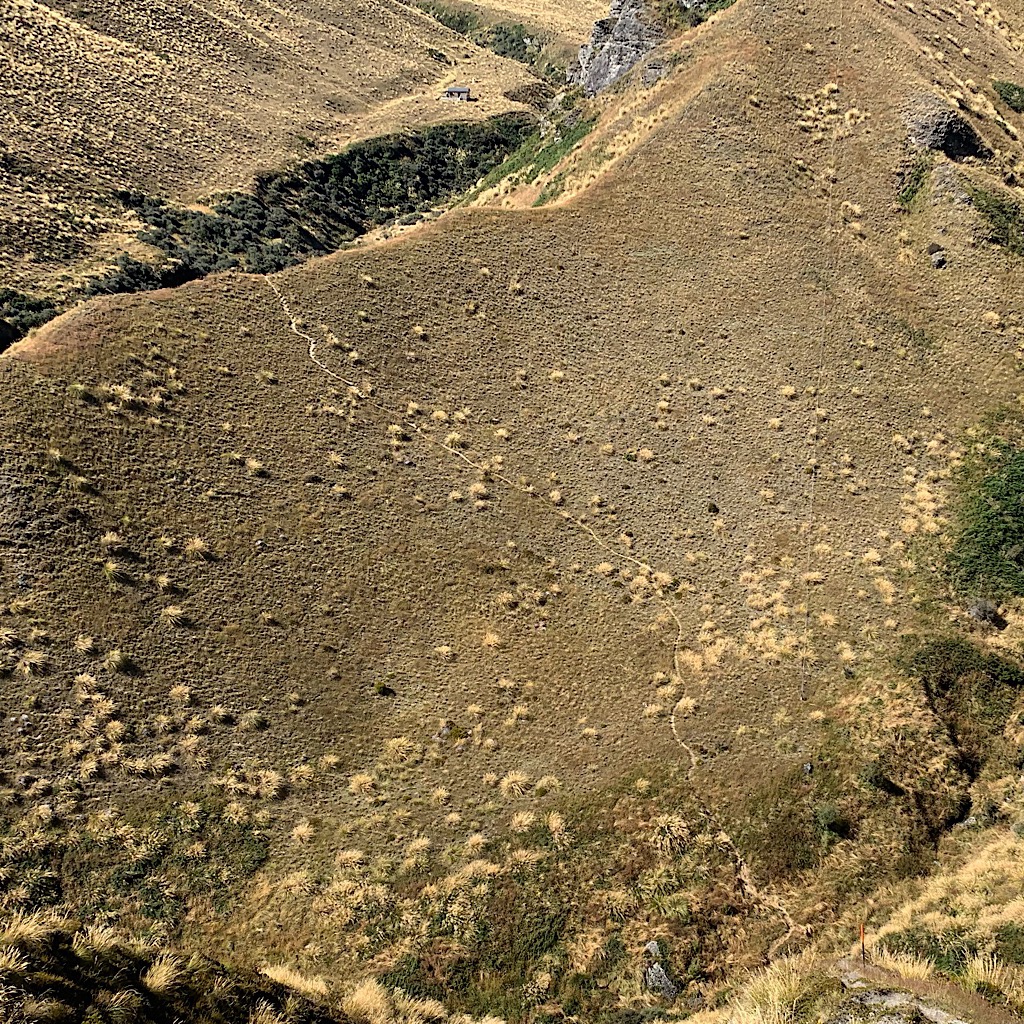 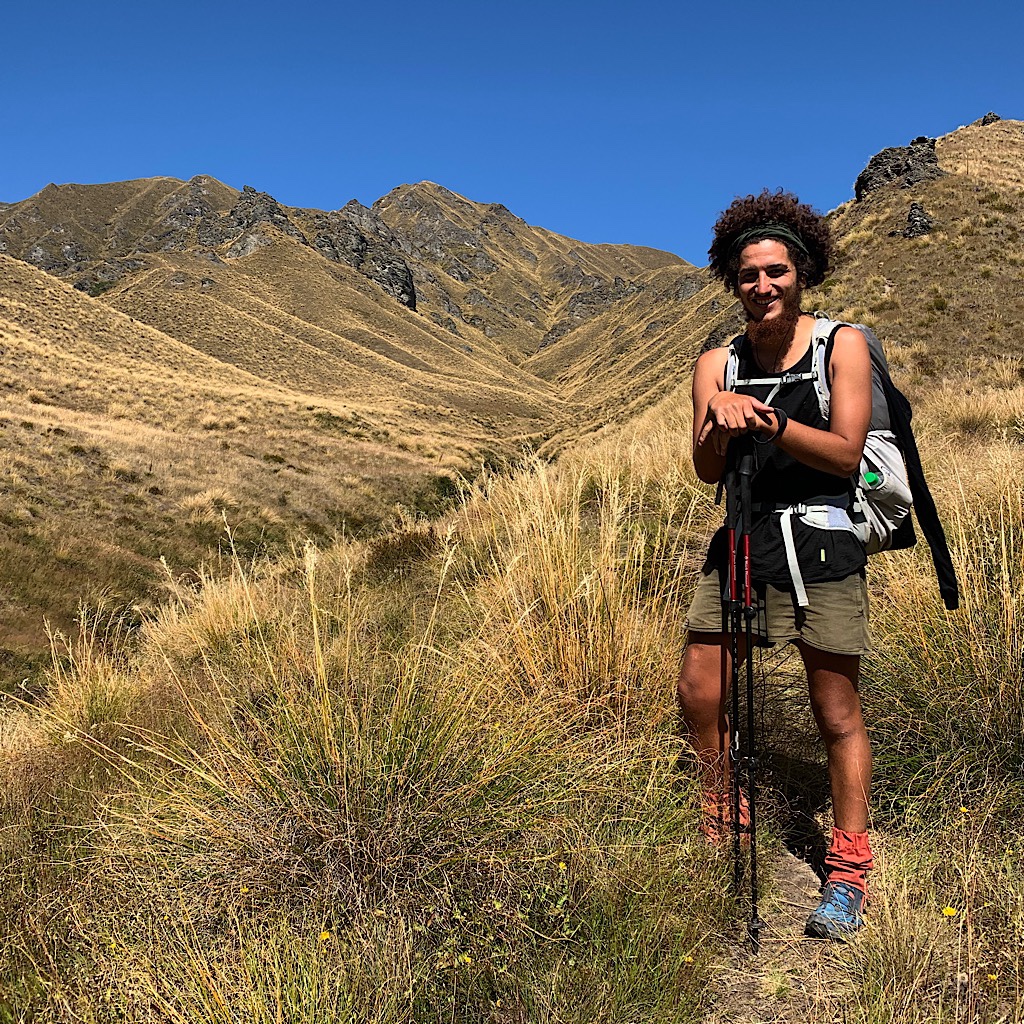 The trail shoots right up and I’m ready to take it on, but then it goes down deep before giving up another go. A Kiwi NOBO catches me and shares beta on the coming sections. He’s from New Plymouth and has no interest in walking the North Island. I tell him Julian and I were the first to summit Taranaki in 2019. He looks a bit incredulous and asks me to take his picture showing an exhausted state to his wife.

This time the trail does go up – and up and more up. Crickets hop a hundred times their length and skinks slink ahead of my step, bending their long bodies in an S-Z-S-Z. This pull is massive, revealing Lake Wanaka in the distance, blue and wondrous, Mount Aspiring winks from afar as cloud shadows shape-shift over the closer peaks.

Someone has hung a pair of old boots sporting green mold and old fashioned crampons nailed into the soles as a kind of art piece. Last night, Kari told me I didn’t miss much skipping the Mt. Cook park. She’s from Idaho and thinks we have more impressive landscape. I’m still pleased I took a side trip to Aspiring’s glacier, hanging over our heads so close with countless waterfalls. A perfect day. 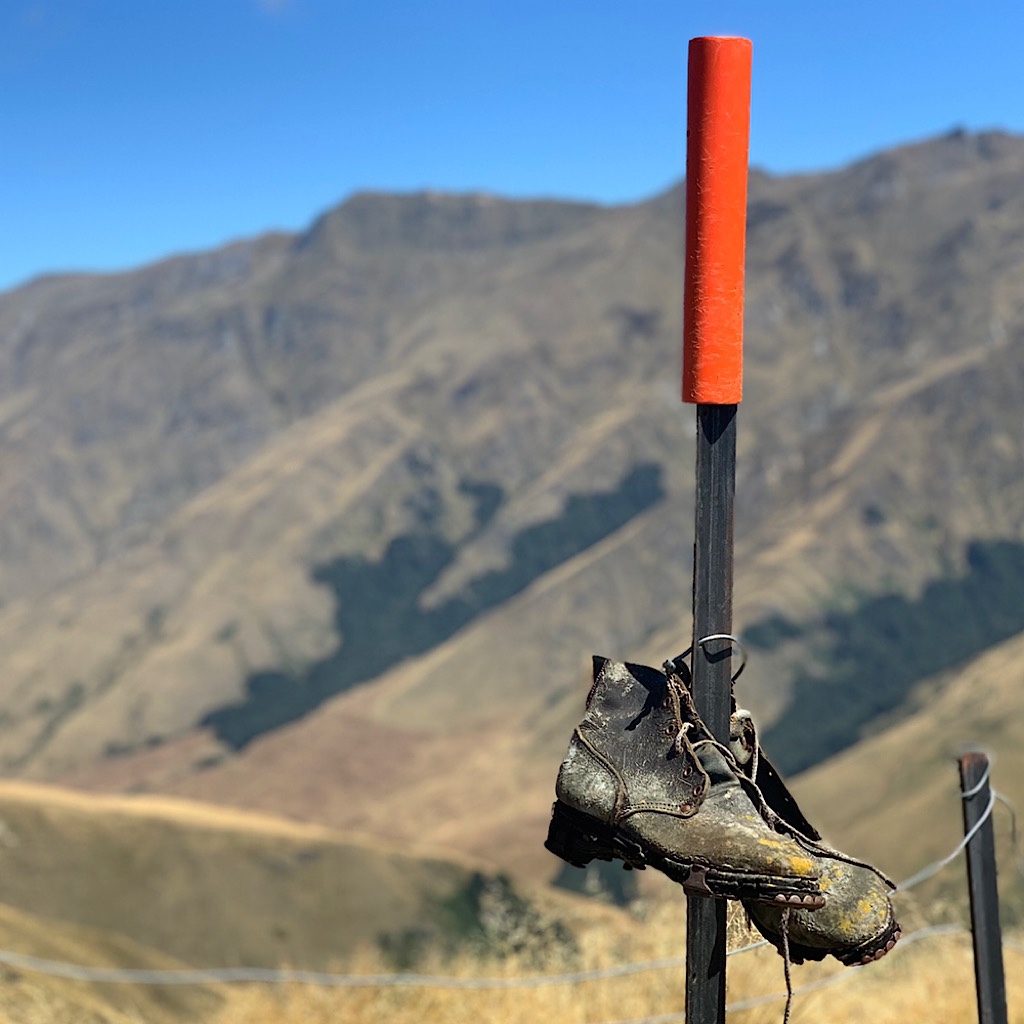 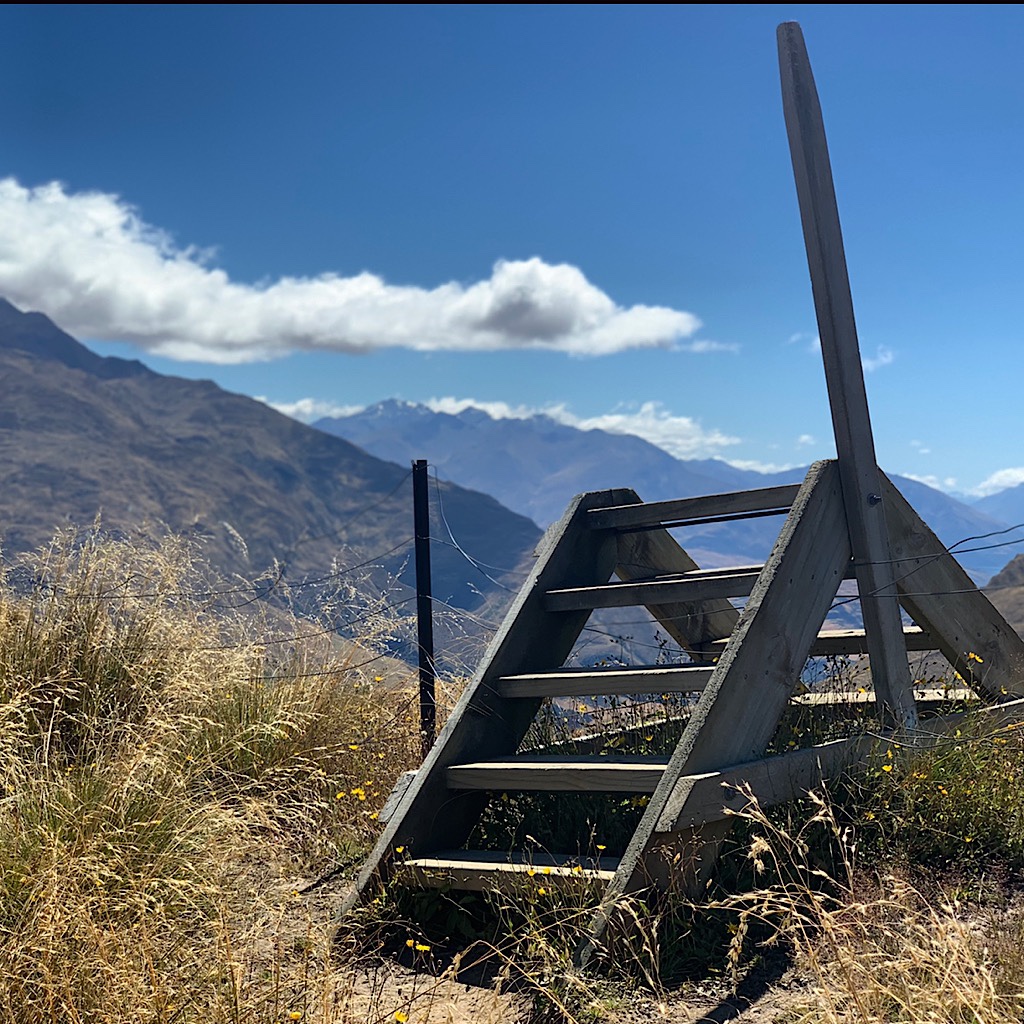 The sun is warm, but a breeze keeps me comfortable so I sit up here a long time memorizing the landscape. My first solo backpack trip was to the Guadalupe Mountains in West Texas about 25 years ago. In the campground before I set off, I met a man with two young boys traveling in a camper van. We combined our dinners to make a feast and watched the spectacular star show. We really clicked and it was sad to say goodbye once I made my way into the mountains, but he had a girlfriend and so we shook hands and he headed back to Colorado.

I came down to my car several days later feeling strong and brave and found a note on the windscreen – not from this guy, but from his friend who he told all about me. This was pre-internet and his friend was asking me out in a very creative way. Sadly, I was too hung up on a dying relationship back home, so didn’t pursue it. Everything turned out great in the end, but I wonder now how much fun it might have been to make some cool friends back then.

I head down now into a deep valley with the clearest stream cutting through, a remnant beech forest in dappled light, yellow flowers nodding in the soft breeze. From here, it’s the final big ascent. It’s humongous, up a steep grassy slope, but next to a fence which must have been placed here by hand. Lake Wanaka is even more brilliant, and below is a river snaking in red grasses, dotted with – what I finally figure out – are hundreds of sheep. Even from this height I hear the river’s song punctuated by high pitch bleating. Wildflowers abound visited by fat bumblebees. I sit again at the top, Olive Oyl propped up on a fence post as my armchair, my bottom on a mini-thermarest. 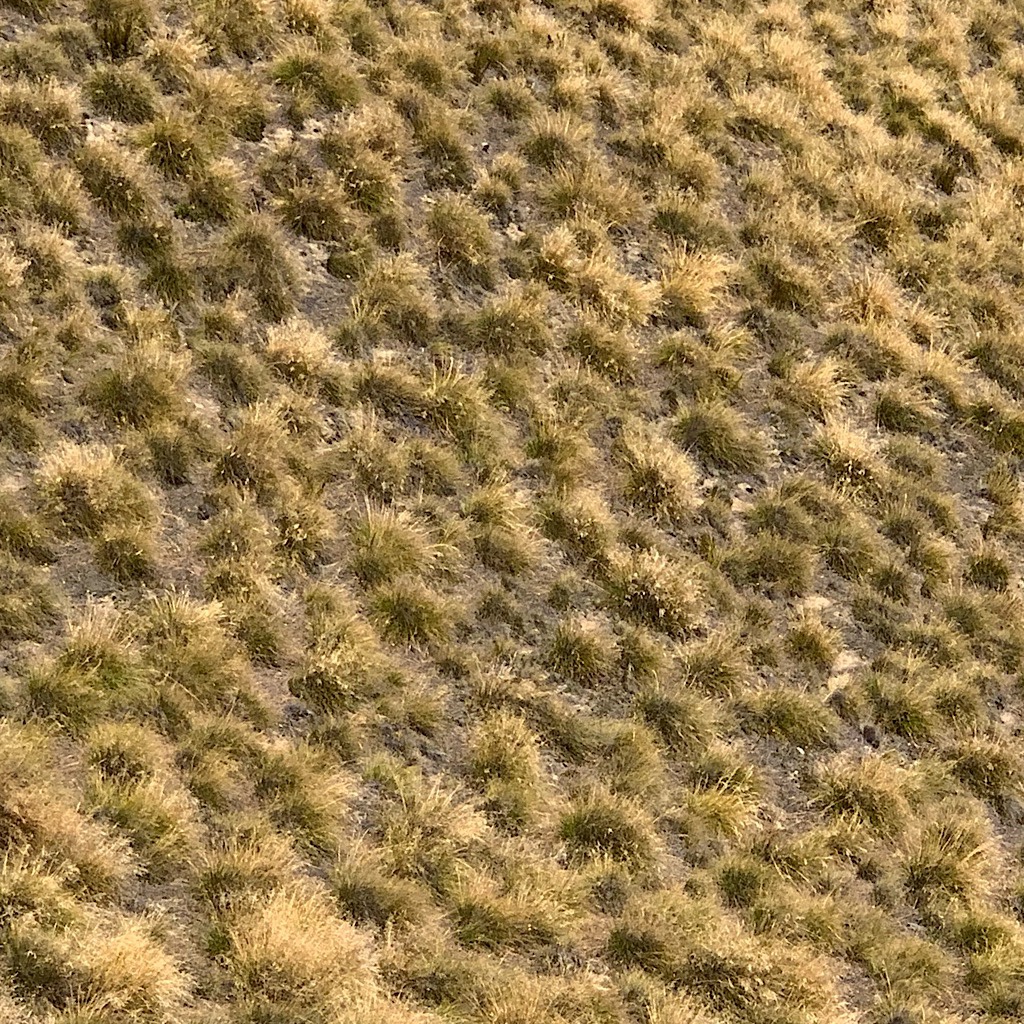 Finally, I drop down to the hut, the first to arrive and have an hour or so to make a soup, then my noodle/tuna concoction on the veranda as the sun begins to set. The Quebecois arrive, David and two Dutch along with sandflies attracted to my blue tights, so time to head inside.

I might look for stars later, but right now – before the light disappears from the tops of the mountains – I’m tucked into my bunk, happy as can be for such an exceptionally lovely day walked well and slowly savored. 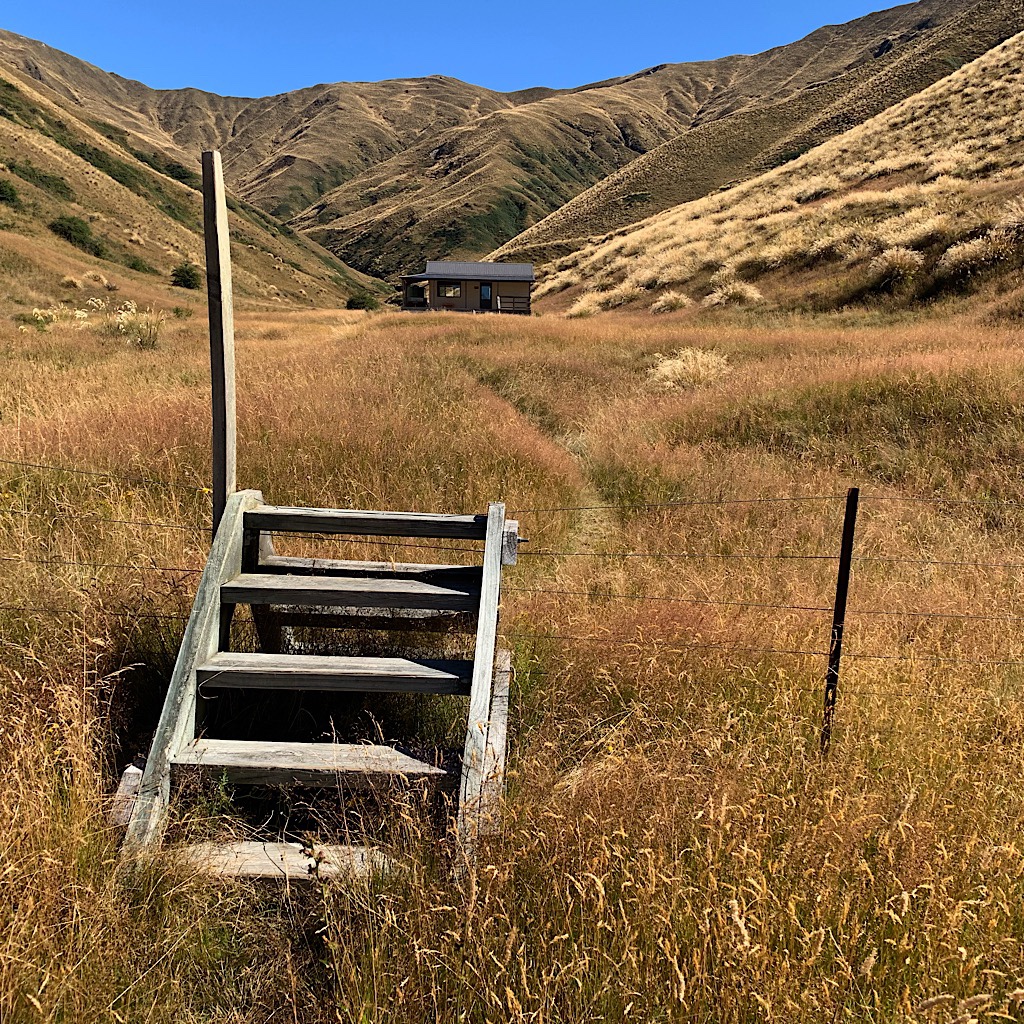