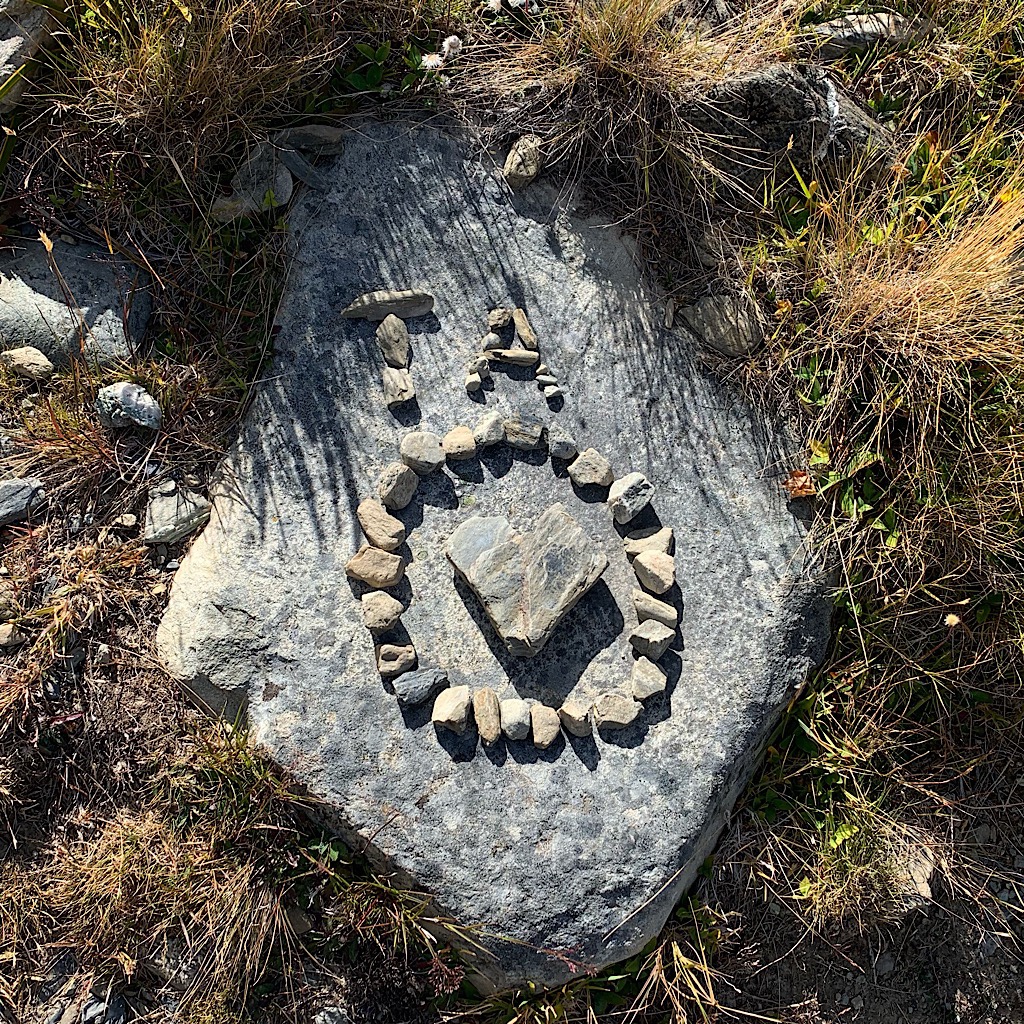 A perfect sleep in a perfect, tiny historic musterer’s hut opens with pink clouds and orange light on the grassy hills. The wind is up, moving those clouds fast over the saddle I’ll climb soon, but first, the loo with a view – for real, as the door is unhinged and laying on the ground.

I notice I lost the bracelet Joan gave me before I left for New Zealand. I feel sad and can’t figure out how it came off. It’s a 4-oceans beaded bracelet and was not only a charm for my hike, but a connection to my closest friend. It’s so hard to keep everything together on this long hike. 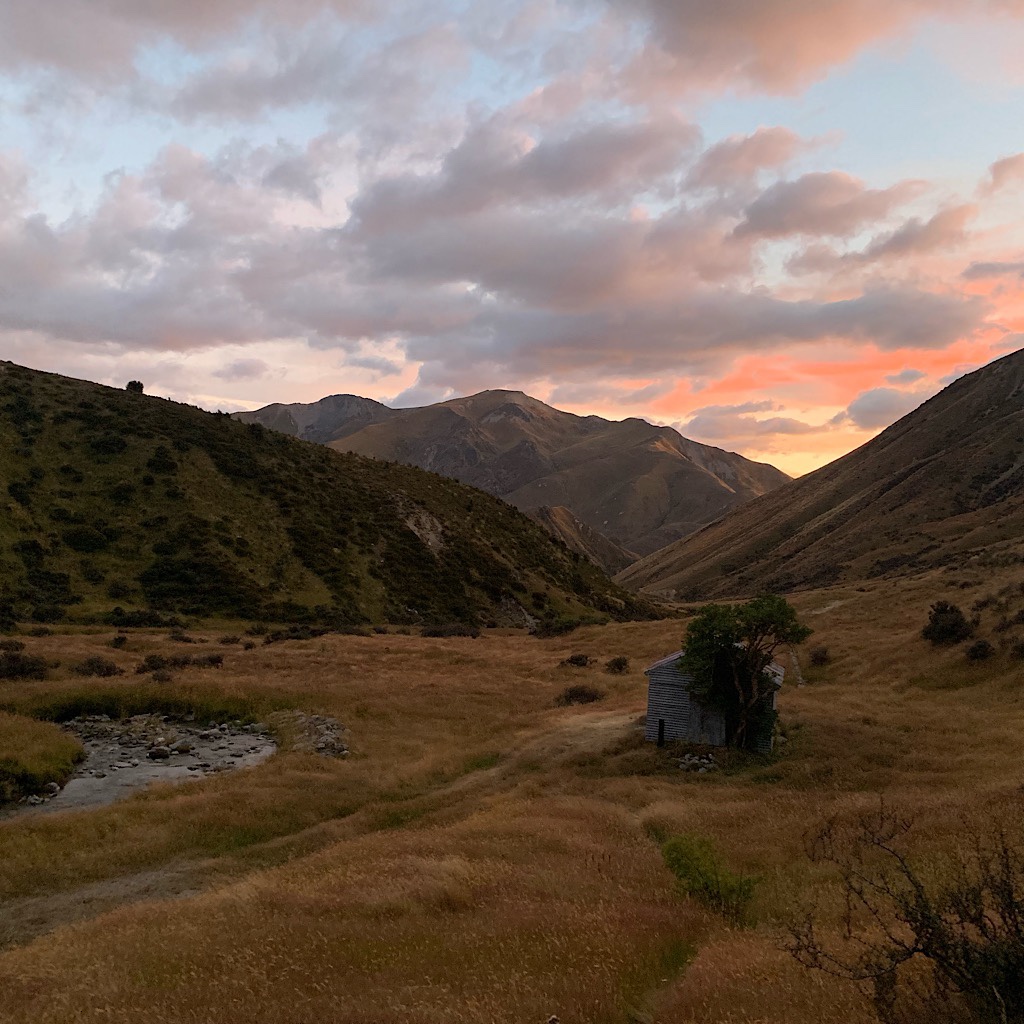 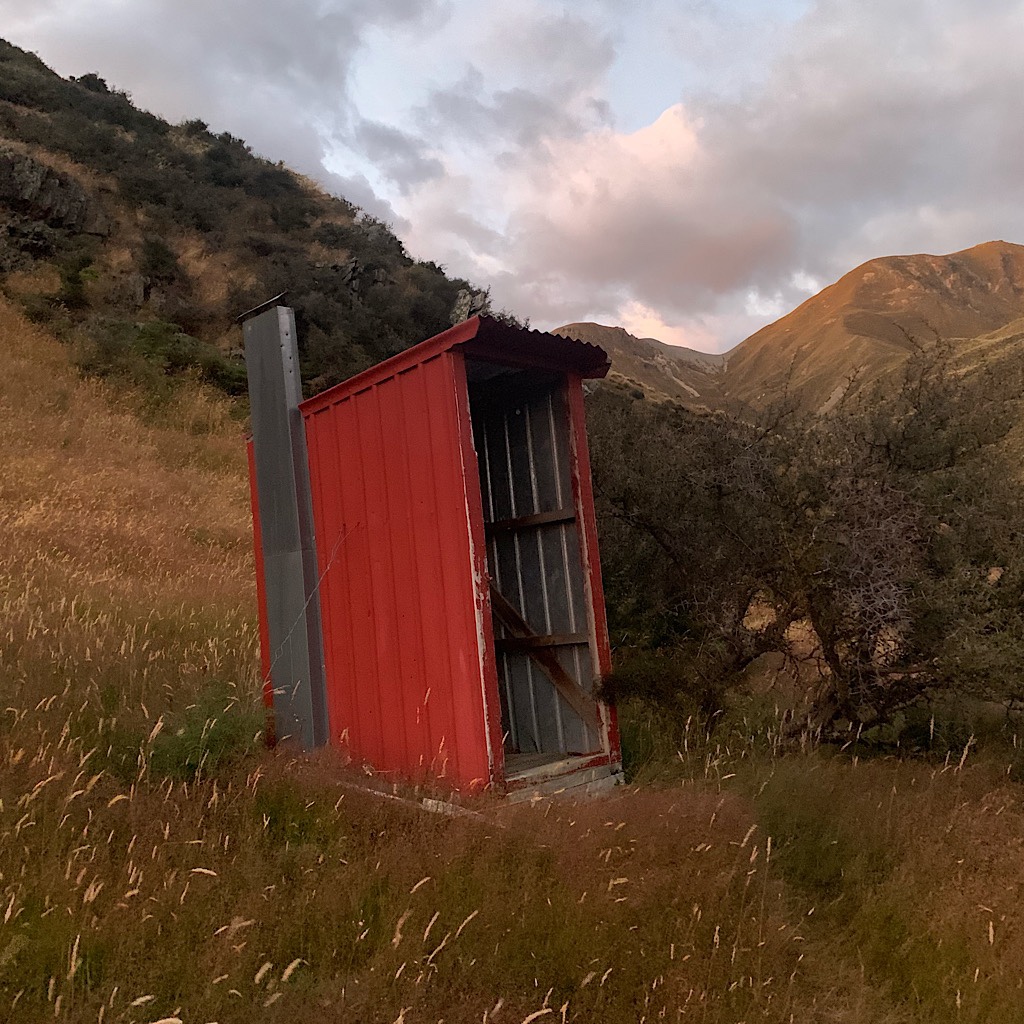 I pack up and begin walking up an old farm track, out of breath and moving slow and steady like a steam engine. I’m not sure if there is a direct connection, but sometimes when I push hard, it brings up negative feelings – almost like I’m squeezing out toxins. It’s possible I’m just agitated losing the bracelet and a little down, but I can’t seem to shake the last encounter I had with Russell, the older Kiwi hiking the TA.

Russell really helped me a lot in managing the tough section in Nelson Lakes when the weather was iffy. For Waiau Pass, he pulled us together as a group so we’d feel safer with high winds and squally showers. It was a great day for all of us and I’m indebted to him.

But during that time, he teased me relentlessly, about being an old hag and how he couldn’t wait for me to leave, among other things. It made me uncomfortable, though I tried to take it as a joke and laughed at the time. 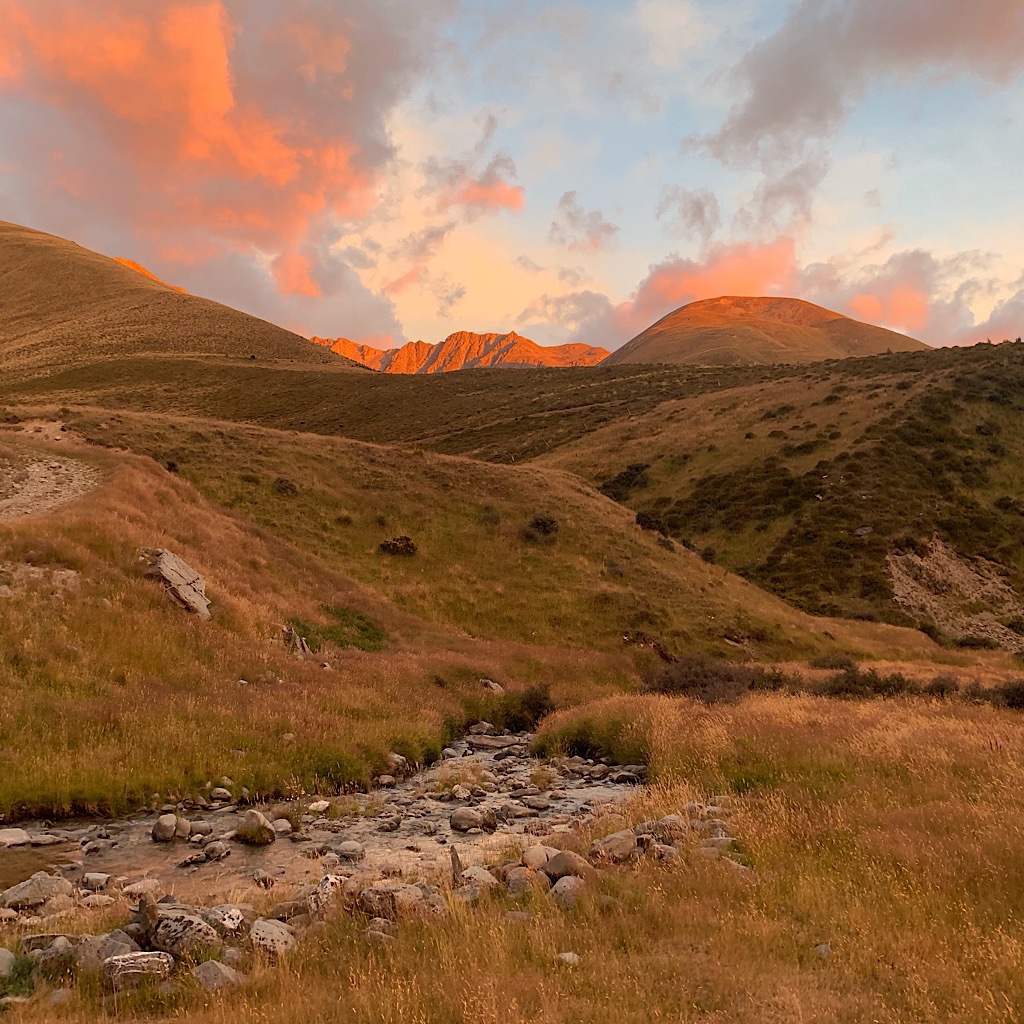 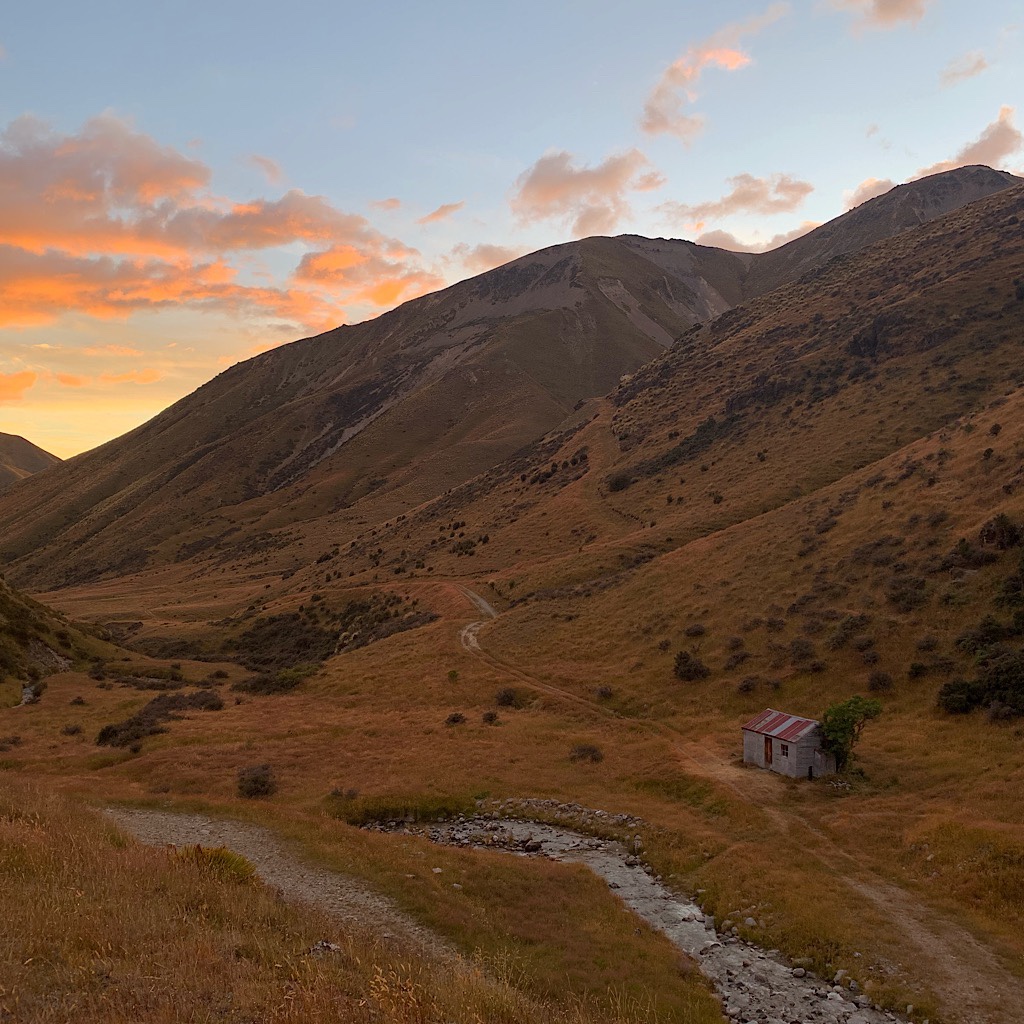 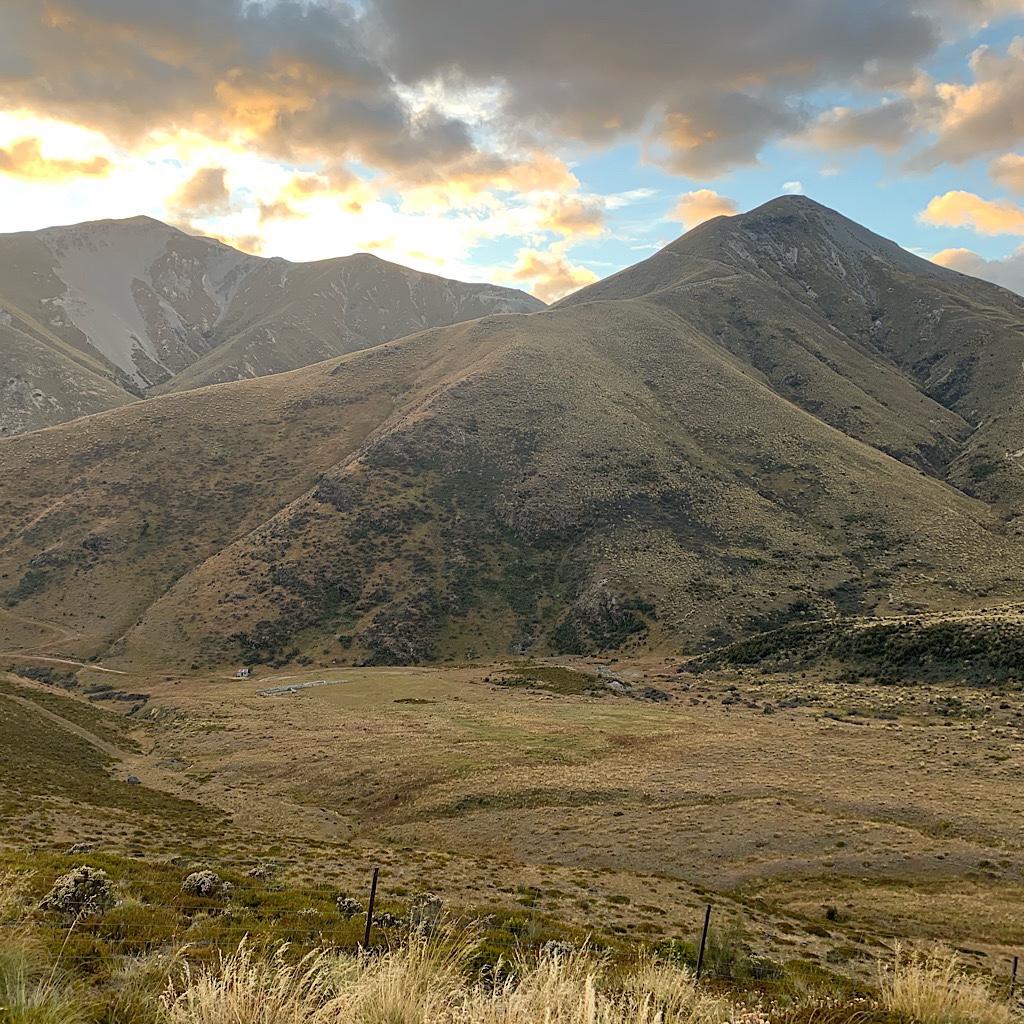 I didn’t understand and explained what I had thought about his being behind. He then told Tom to get away from me while he could. It was silly, I guess, but felt so odd and troubling.

The track gets rocky with noisy slabs crunch-pinging as I step on them. The mountains appear to expand as I get higher and the wind picks up. The views are incredible, and even more so at the saddle, looking far into a deep valley. My trail cuts right along the scree slopes and feels so good under my feet. This is no guess-where-to-go kind of trail like in the Two Thumb range, but more a planned, maintained American-style trail. Massive peaks wink through a window made by the closer peaks before I drop down and they disappear.

My Aunt Christa is a little like Russell, everything always a joke and a tease. But it wears me out and perhaps it bothers me so much with Russell because he doesn’t say these things with a smile. I’m not sure if he means them or is just prickly when someone gets close. 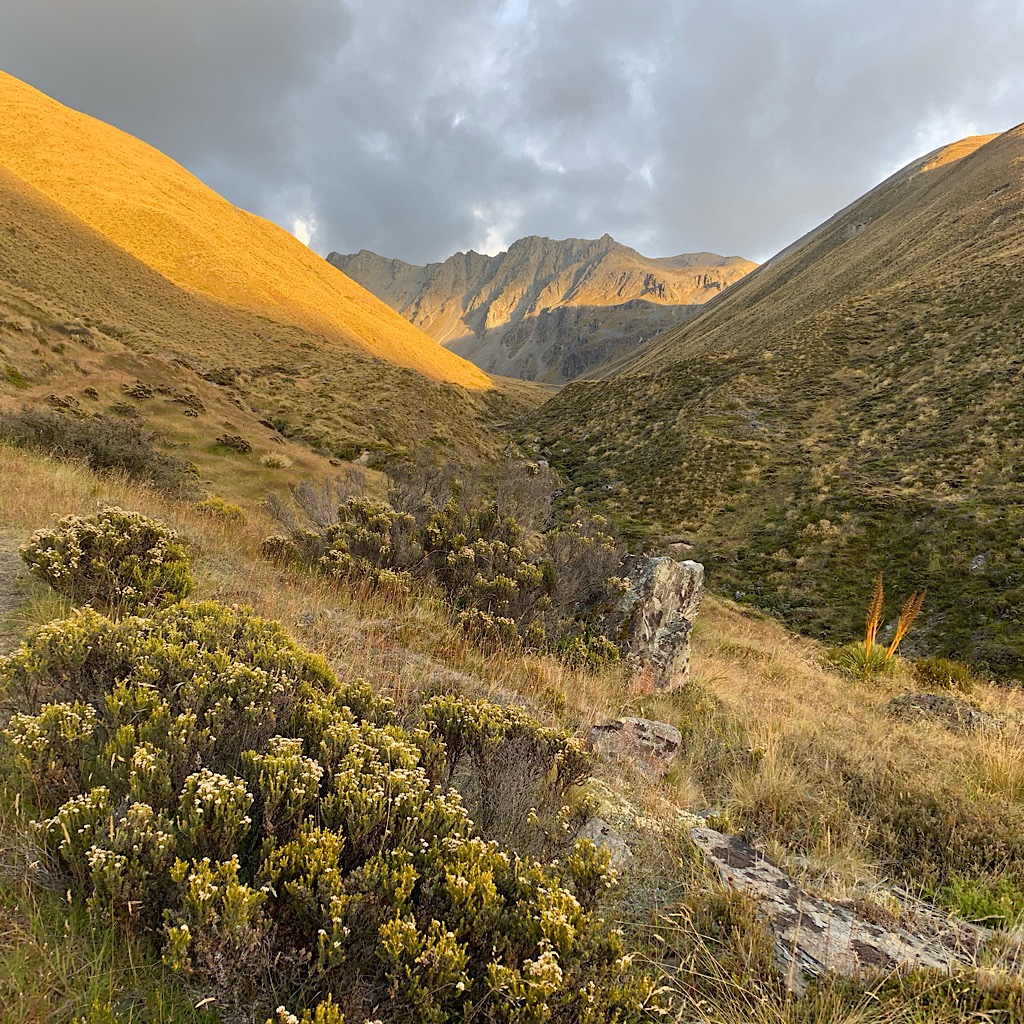 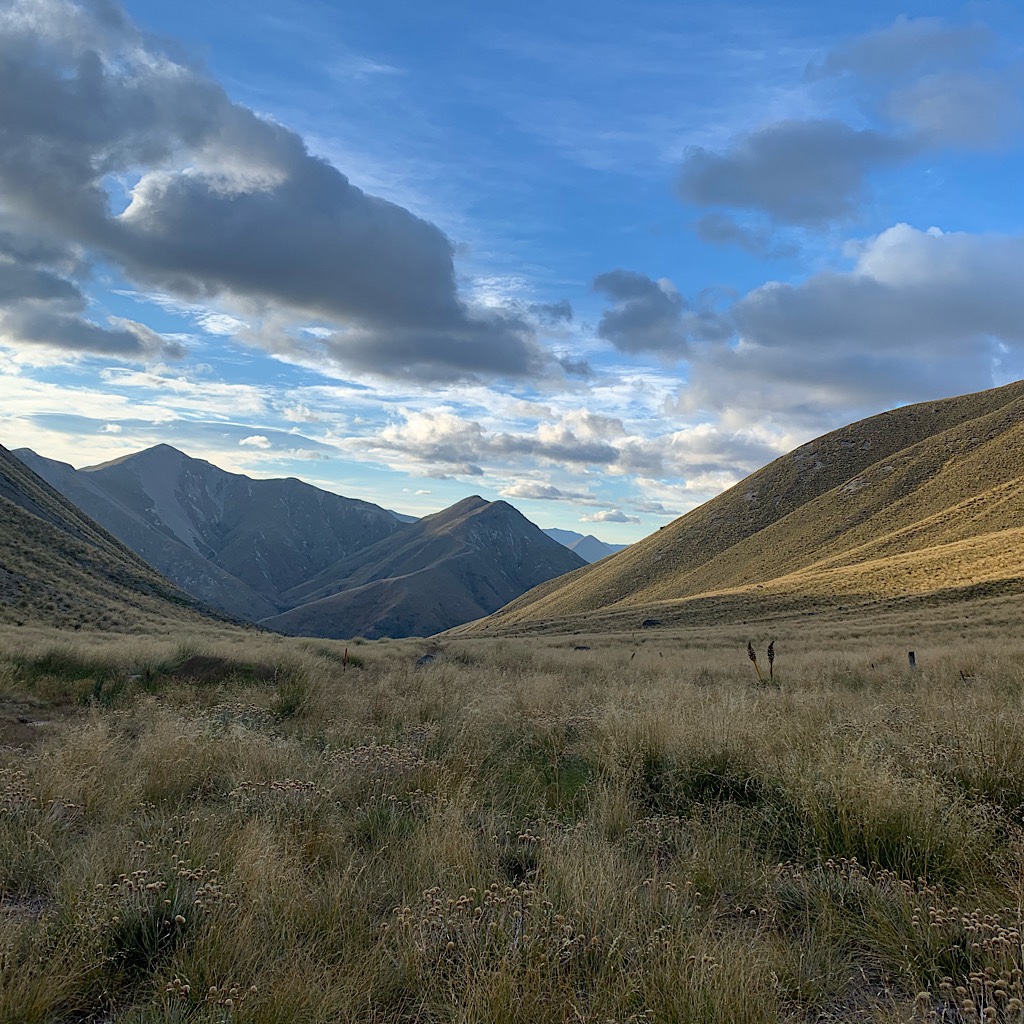 He pops in my mind because now he is a half-day ahead and I may see him again and not know how to act. I wanted to sleep in the Hobbit House in Twizel – which turned out to be nurturing and afforded me time to work on audio – but that meant I rented a bike for two days instead of one and it was a bit expensive. Though I’m wondering if the expense was like paying for therapy, and figuring out how much I enjoy – and need – to recharge my batteries alone. I see no one coming up the valley and I wonder if this day will be all mine?

I mostly walk a clear path next to the Timaru river, easy and direct, the first indication I am near the hut is the outhouse sitting alone on a high point. It’s a lovely new hut with plenty of light from corrugated plastic sheets. It’s immaculate inside.

No one is around and I make lunch on the stoop in the shade looking at the stream below, craggy mountains towering above. Russell stayed last night, as did Eva of the blinding klieg light. I laugh thinking of a made-up word my friend posted on social media – ‘antistalking’ – when you study someone’s schedule to know how to avoid them. I feel fine thinking of those two sharing a space that doesn’t include me. There’s no point in analyzing why Eva was so huffy or Russell teases me. I’ll likely never know why anyway. But I can stay out of their way. 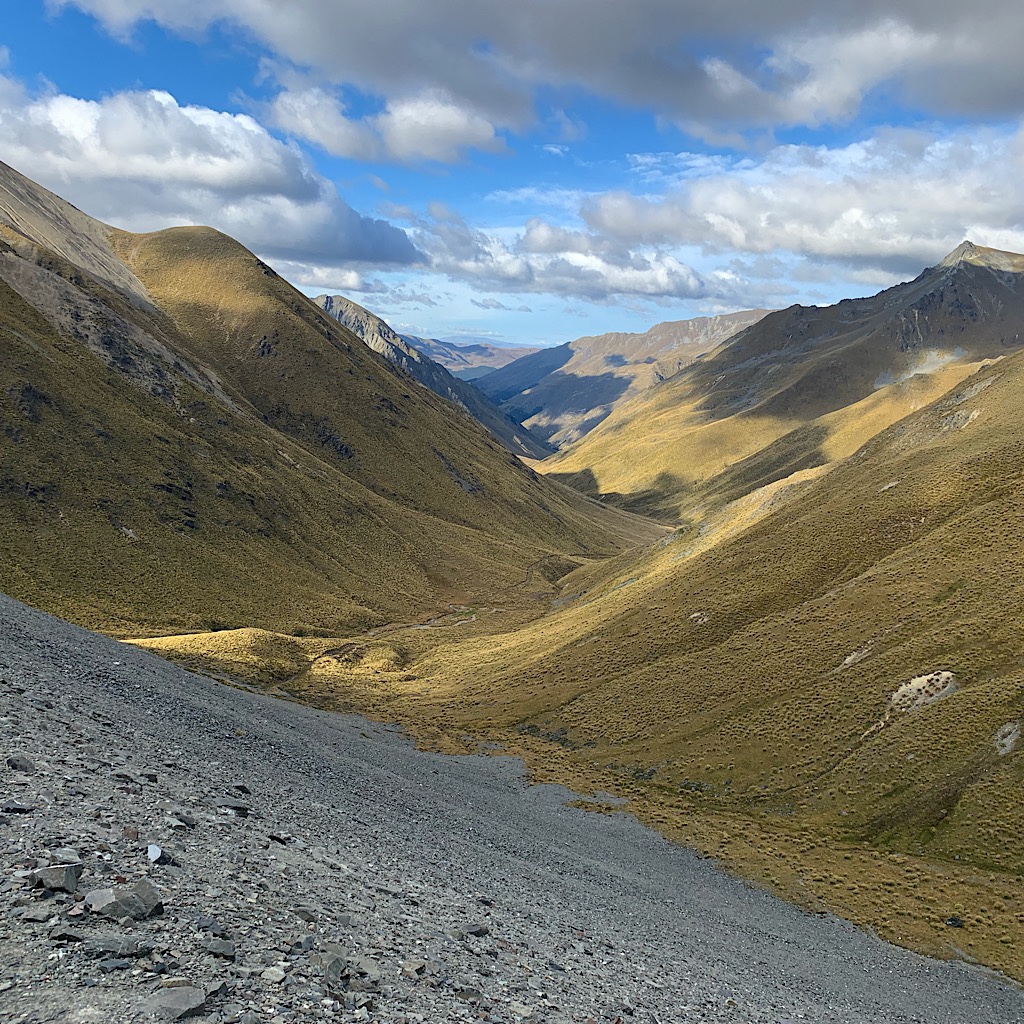 Which I do by aiming myself towards the next hut with a good half day separating us. The trail notes warn of river walking, sidling and many ups and downs. Almost immediately, I get a taste of what’s to come when the trail shoots up over a ridge-line between streams, then shoots straight down to one of the streams – no zig-zag, no gradual slope, just down an eroding chalky scree.

I use my sticks constantly to arrest any misstep as this is kind of controlled falling – one of many free-falling kinds of descents, repeated over and over. The trail is designed – if there’s any real thought going on – to take the hiker over cliffs and obstructions, so it flies straight up and high then right back down on slippery dirt, sometimes over – and under – fallen logs, sometimes climbing with hands in washed out sections, sometimes the feet barely clinging to the slope.

Sidling is something I have never encountered until New Zealand. It means to walk a narrow track on the side of a steep slope. On the TA that walk is always exceedingly narrow with a consequential fall line. I’ve learned to stay completely focused while sidling, tether my poles to my wrists – if they go, there’s no getting them back – and move slowly and deliberately. Sidling is better than going up and down, but dangerous – well, so is going down, far more than going up because you have momentum practically daring you to fall. That’s why people complain it hurts their knees because so much pressure is put on the quads and knees to keep us from sliding right off the mountain.

The trail also takes me through the river numerous times, a river that rushes in rapids. The water feels refreshing on my skin and I’d prefer to just walk down it and avoid the sides altogether, some which are giant boulders in beautiful shapes.

The water is a pale aqua and lovely to see as well as hear. I sit for a while in a meadow that opened up after a hobbit forest of bright green moss and beech trees. Cicadas saw away, birds compete with the breeze to make the most lovely song, the sun is warm and the air smells earthy fresh. A couple of gnarly old trees look like extras from The Wizard of Oz. Butterflies fill the air as I walk by. The trouble with a hike like this is eventually I need to get somewhere. I may want to avoid a few people ahead, but a massive – and loud – group is right behind me. I would love to stay in my meadow, I could camp here, but I would be alone only a short time before the flood gates open.

Am I thinking this through correctly? Am I moving too fast, I wonder. I had two exquisite nights alone and so far today, I haven’t seen a soul. But once I left that gorgeous meadow, I have been in deep woods, sidling and killing myself on the up and down, walking on rocks and crossing the river, seeing no sign of a place to camp. The canyon goes on for ages and I begin to get tired, mostly my spirit flagging, not my body.

I am almost at wits end when I see the orange triangles sending me straight up again for seemingly no purpose but to fly down again. I start letting those forbidden thoughts of, “What’s the use?” pop in when suddenly I see a sign for Stodys hut.

Two hours more to said hut, is what the sign mentions.

The reason being that this time, I go straight up on barely-there dirt so steep – 500 meters to gain in that wee space of 2 k – they might as well have built a ladder. It’s the steepest trail I’ve ever climbed. And it seems to just reach the top when a marker points left up another wildly steep section. Blue sky ahead as the marker sends me right this time, over an even steeper bit. 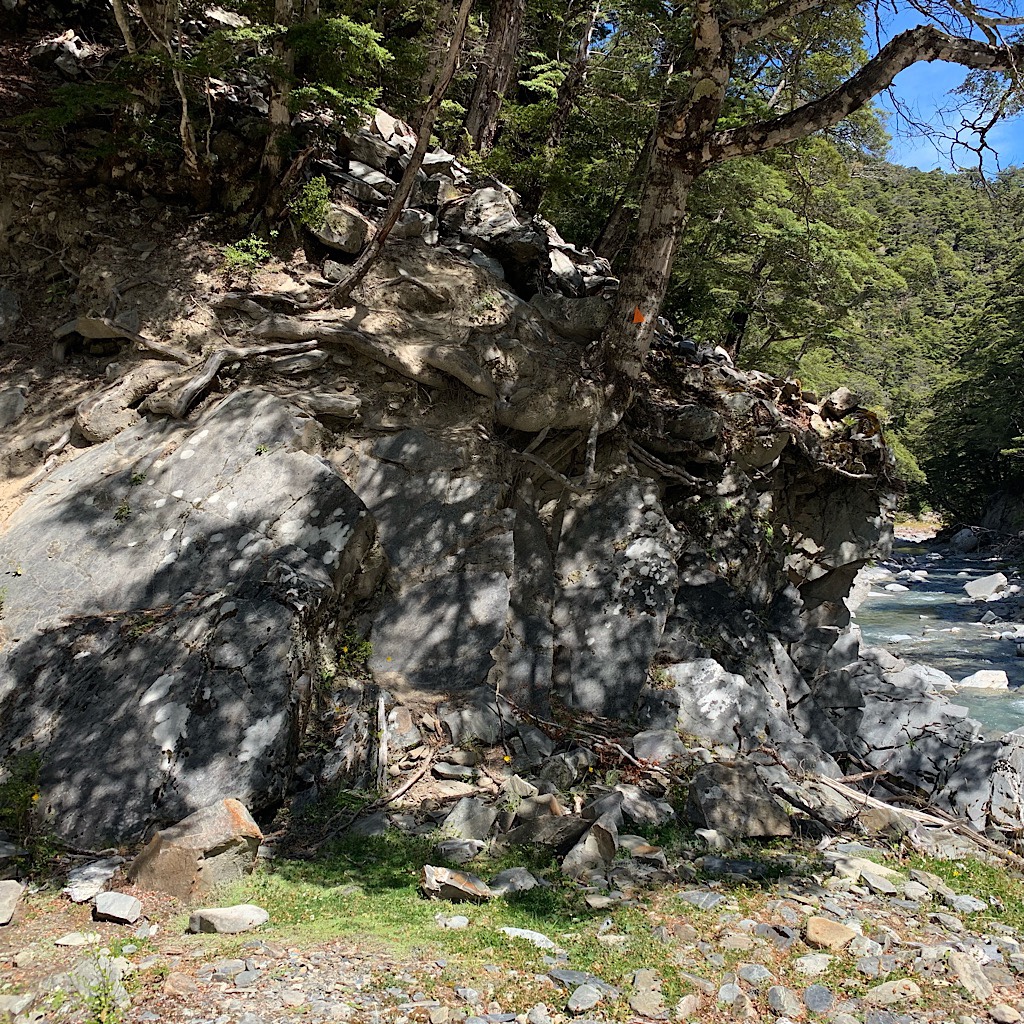 I’m winded and wasted now, thrown out onto yet one more sidling section on the edge of a mountain. Around a few corners I spy the roof of a hut and practically collapse inside. Three NOBO’s are there, two older English-Aussies who start right in teasing me about being American. I can’t take it, so set the alicoop in the trees.

But I return to make dinner when a fourth NOBO arrives and we actually have some lovely conversation. I don’t mind them so much, and actually would have liked if we’d hiked together. Still, good to sleep in my own space and continue enjoying my solitude – and faff about getting comfortable without worrying about bothering anyone. The two Aussies give me excellent advice on tomorrow’s walk before I cuddle in for what’s expected to be a cold night. I’m pleased I managed a hard day’s walk on my own and sorted out in my mind that I can be alone and be quite happy. I hope I can explore this idea of simply stopping somewhere beautiful even if it’s early as I’ll likely never come here again.

For now, I have no view, but I’m out of the wind and tomorrow’s expected to be fantastic scenery. Time to let the muscles rest up for more uphill in the morning.