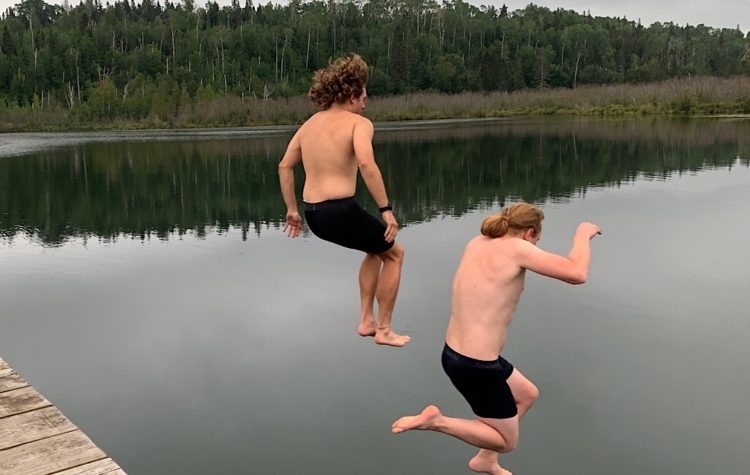 True, the sun and the wind inspire. But rain has an edge. Who, after all, dreams of dancing in dust? Or kissing in the bright sun?

Rolling thunder wakes me with flashes of light like so many strobes. I feel scared as the wind picks up and wonder if the enormous birch behind my head with branches only at the top will stay standing. I pop out to poop and pee before it rains.

No rain hits until it’s light and it’s only a sprinkle, so I pack up and get started on the short walk to a bay with shelters. I liberate three spiders with bulbous bodies and stringy legs who spent the night huddled under my pack’s lid. A slender black fox with a bushy striped tail visits for handouts.

The trail heads up through dense woods. My rain pants protect me from the wet overgrowth. I catch glimpses of small islands off this main island, all uninhabited except for their native creatures.

I walk straight into a refreshing wind and think about the pipe passed around last night. I’m not against smoking, but like headphones on the trail, I don’t see a need to alter my mental state while hiking and prefer to be completely alert and in tune with my surroundings.

Right now, my surroundings are threatening and expectant. I hear thunder to the north and south, growling like a warning. It’s so dark when I walk through forest, I can barely see where to put my feet to avoid the mud.

END_OF_DOCUMENT_TOKEN_TO_BE_REPLACED 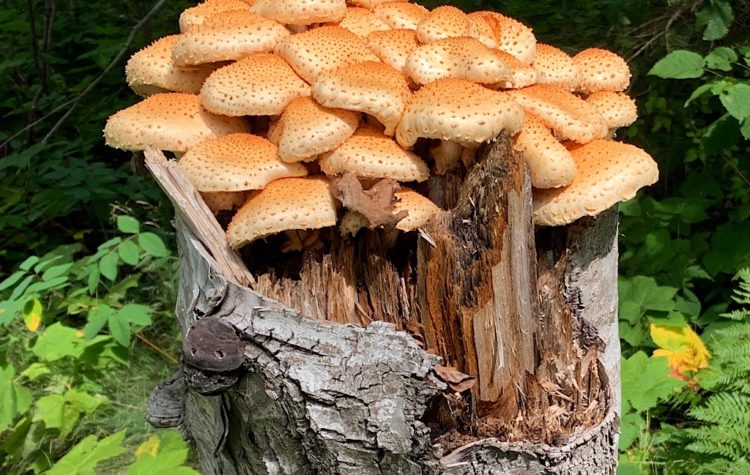 Learn to recognize good luck when it’s waving at you, hoping to get your attention.

The day starts with loons calling across the lake, mournful, then in that hysterical yodeling which sounds, frankly, loony. I don’t bother packing quickly since the sky is clear and I feel no pressure to move.

But I’m out before the boys – one of which wanders into my camp accidentally after using the outhouse, apologetic and embarrassed – and the father and son, who I walked in on as they were changing clothes, but fortunately for all of us, strategically placed overgrown ferns hid any private bits.

END_OF_DOCUMENT_TOKEN_TO_BE_REPLACED 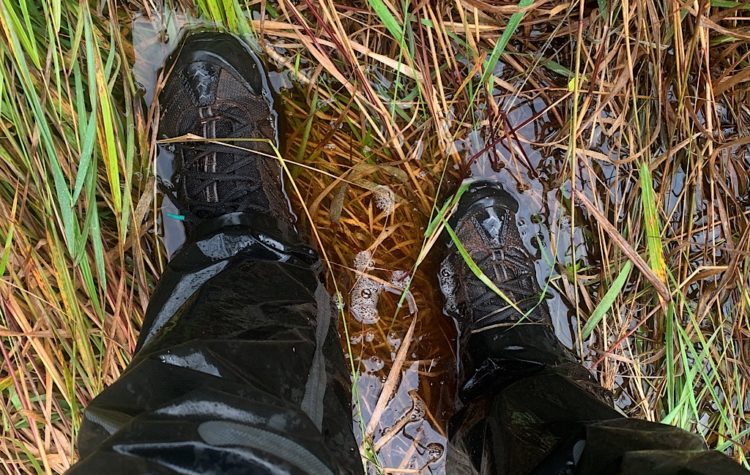 A beaver does not, as legend would have it, know which direction the tree will fall when he cuts it, but counts on alacrity to make up for lack of engineering expertise.

It’s drizzling and my clothes are damp from dew even protected inside the shelter. The good news is that in spite of the gloom, I can see the ridge I’ll walk ahead, double humps of tall trees.

Jamie walks past and tells me there’s a 30% chance of thunderstorms. Christian packed the weather radio from his boat. They bring so much gear, no wonder they decide to take the day off and stay here.

Not me! Thunderstorms aren’t going to stop forward progress as I almost immediately meet sloppy, black mud. I have the rain pants on again for the bushwhacking nightmare I’ve been warned about. Not many walk the Feldtmann Loop to begin with, and this year, the trail has seen fewer hikers and even less maintenance.

END_OF_DOCUMENT_TOKEN_TO_BE_REPLACED 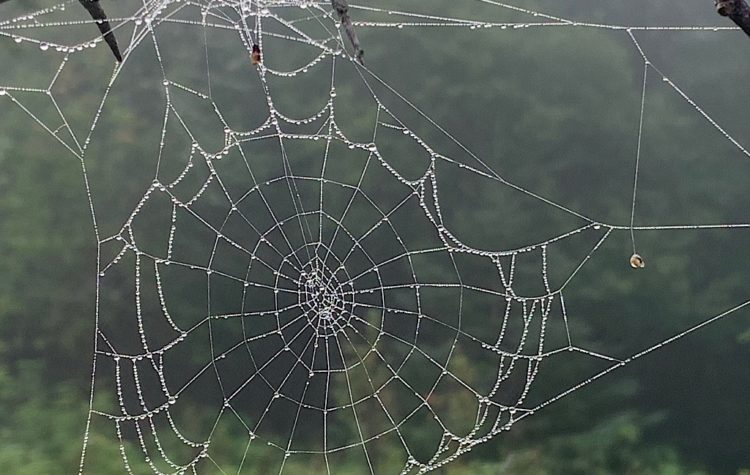 Suddenly a mist of green on the trees, as quiet as thought.

It drizzled last night and my lake is shrouded in dense fog. I notice for the first time witch hair moss draped over branches of the big cedar where I hung Blueberry, hopefully high out of long black-socks-fox’s reach.

No swimming this morning as I put on rain gear, mostly for the shrubbery car wash to come. The wind is high as I make tea and eat bars. Here’s hoping it gives me views from the Feldtmann fire tower.

Almost immediately, I cross an oily wetland on boards, one broken and sunken, but the ranger told me it was safe if I move slowly. I tell myself it is forbidden to fall and shuffle across.

The forest is dark and wet and I move well alone in the early morning. I know the ridge comes soon and it appears as stairs heading straight up to pines. The sun pushes through silvery and bright. Crickets with fancy wings leap out of my way as my feet walk on large stones in a kind of concrete emulsion.

END_OF_DOCUMENT_TOKEN_TO_BE_REPLACED 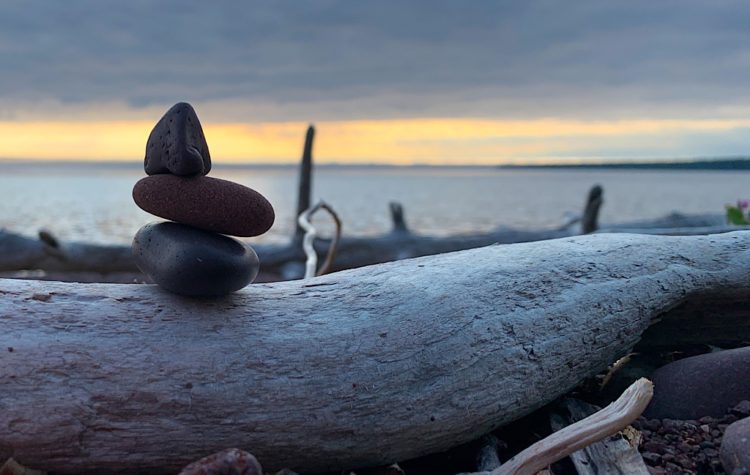 A fox tries to make its home near good supplies of food.

All night, the sky lit up like a strobe light, thunder rumbling long and menacing, but not one drop of rain reaching me. I packed everything inside the tent including my muddy shoes, afraid a creature would make off with something vital.

The sunset was so perfect last night from my private rock outcropping, but this morning is socked in with fog. I pack up quickly, noticing one fat slug curled under the alicoop’s tarp.

Tea is made and I bite into the best bars yet. I tweaked the recipe, leaving out any wheat products and cutting the uber sweet dates in half. I have neighbors, but I only see one quietly emerge to grab water. I leave before their tents come down.

END_OF_DOCUMENT_TOKEN_TO_BE_REPLACED 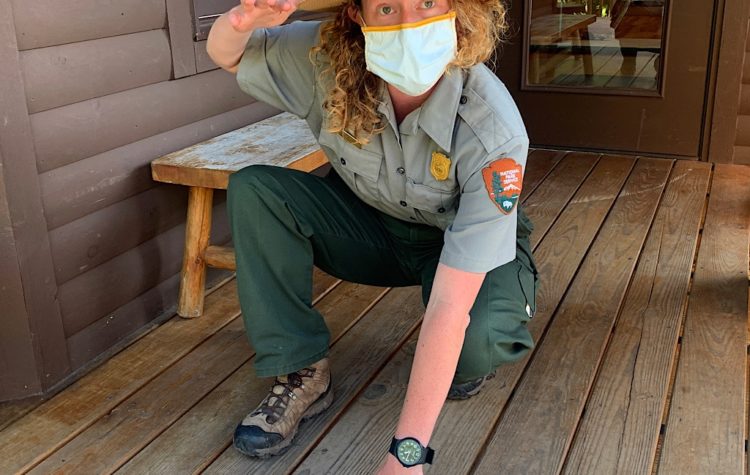 We’re up at the crack of dawn since last night’s party got a bit out of control and now we need to clean and pack before leaving Karen’s beautiful home right at the edge of the water.

Karen is a follower and a friend I have yet to meet who so generously gave me the run of her empty house on rocks above Lake Superior. She’s one bad ass gal, climbing Colorado 14ers into her 70’s. Karen is my heroine.

This vacation of hiking, kayaking, cooking and lazying around was desperately needed. But now it’s time to say goodbye as we busily vacuum, wash dishes and organize a week’s worth of garbage and recycling. Richard is grumpy without coffee. Sorry, smackles, it’s already packed.

The airport isn’t far, just up the hill where we pass our favorite field laid out like a table cloth, billowing out to the massive lake below. Round hay bales sit at odd angles like watchmen of the seemingly endless horizon.

This time though, after a week of glorious weather, we pass it under soupy skies, our height revealing just how dense the fog is sitting low on still water.

And just as you’d expect, the news isn’t good at the tiny Cook County Airport where one masked gentleman informs me the planes were grounded for two days. Just as the words leave his mouth, Isle Royale Seaplanes phones me to confirm what we expected – weather delay, though she cheerily promises to call each hour with any “developments.”

END_OF_DOCUMENT_TOKEN_TO_BE_REPLACED 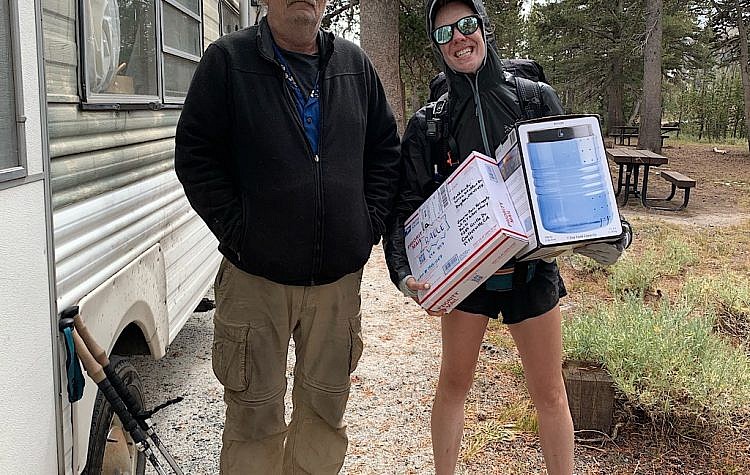 In the end, maybe it’s wiser to surrender before the miraculous scope of human generosity and to just keep saying thank you, forever and sincerely, for as long as we have voices.

It was a cold, blustery day with dark clouds threatening as I dropped down to the highway at Sonora Pass late last September on the Pacific Crest Trail. The wind was so intense, it literally took my breath away even as I paused to take pictures and enjoy this sensational scenery right on the edge of Yosemite National Park.

Ahead was the Emigrant Wilderness, an exposed crossing of over ten miles at high altitude and I was fairly certain this was a no go day for me, but I needed a resupply and that would require a hitch deep down into the valley. With weather like this, the trail was empty.

At the tiny turn out, a few scattered picnic tables stood watch over the approaching weather, along with a single RV. On its door read Sonora Pass Resupply. The proprietor, Casey Cox, was cozy warm inside with his beautiful, blue-eyed dog named Lucky.

END_OF_DOCUMENT_TOKEN_TO_BE_REPLACED 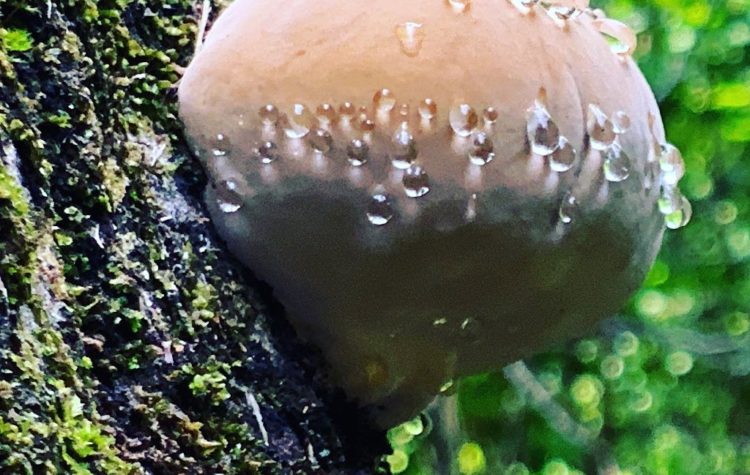 Traveling is like flirting with life. It’s like saying, ‘I would stay and love you, but I have to go; this is my station.’

I’ll leave for Isle Royale later this week for eight days of backpacking, but first it’s a much needed vacation with Richard “up north” at our friend’s house on the shore of Gitche Gumee, “the big lake” (the largest lake in the world by surface area, Lake Superior) as well as in the enchanted interior forests filled with waterfalls, ancient dike swarms, and fungi.

END_OF_DOCUMENT_TOKEN_TO_BE_REPLACED 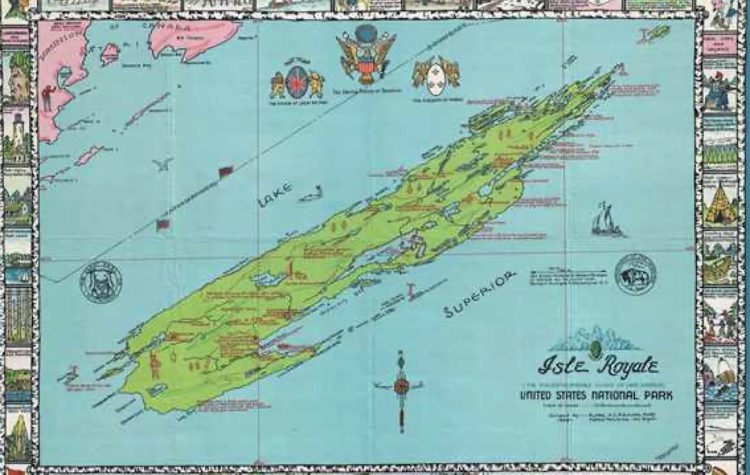 A walk in nature walks the soul back home.

This summer was nearly absent any hiking at all for Blissful.

Aside from riding my bike “Hank” over-and-over on the 30+ miles of the Twin Cities superb Grand Rounds – one of the best things about living in the Upper Midwest – or hiking my favorite loops at Lake Elmo and local state parks, I have been focused solely on building my voice over business and launching the podcast.

So when my friend/follower/cheerleader Karen offered us her house up north for a week, we jumped at the chance with, as you must have guessed, Richard’s prodding me to get out and backpack, even just a little.

It was his idea, after-all, when I suddenly became 100% boss-free last spring, to launch me on yet another long-distance walk of the Pacific Crest Trail. My intention was to only walk a few weeks to “see what happens.”

What will happen this time around is I will board a float plane (fully masked, of course) for a quick hop from Grand Marais, Minnesota to Isle Royale, Michigan. At 206 square miles, it is the fourth largest lake island in the world and the second biggest in all of the Great Lakes – and it’s a backpackers’s paradise.

END_OF_DOCUMENT_TOKEN_TO_BE_REPLACED 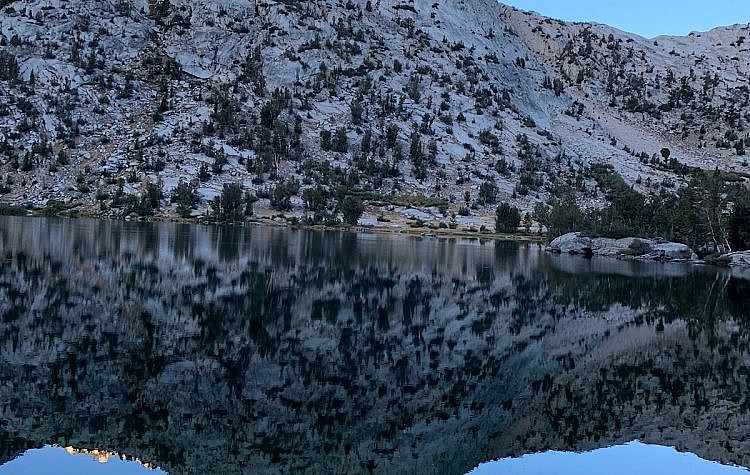 I met actor and aspiring life coach Billie Jo Konze on the phone, when I decided to become a voice actor myself and needed the unvarnished truth on next steps. Billie doesn’t hold back, and told me it could be an exhilarating ride, but, like any life goal or trail we attempt to walk, it would require focus, patience and massive reserves of inner-strength. Billie Jo runs my accountability group, and there’s no one I’d want more in my corner than this wise woman!

Just before the beginning of the year, I was on a flight to the Dominican Republic with my boyfriend and his family, as always, trying to pick out a good in-flight film. Instead of joining my boyfriend in a lighthearted superhero flick, I decided instead to watch Free Solo, as I’d missed it in theaters, and knew I’d probably never watch it at home.

I spent the next hour and forty minutes with my eyes glued to the screen, mouth agape, sweating, swearing, and occasionally emitting slight whimpering noises.

If I’d known how this year was going to go, maybe I would have chosen the superhero movie, but Free Solo is an apt metaphor for any great undertaking, and I’m glad I came into this year high off the vicarious adrenaline of watching Alex Honnold prepare for and execute his climb.

Whether you’ve seen it, haven’t seen it yet, or never plan to see it because your heart just can’t take it, here are a few things I took away from this amazing feat:

Free soloing is extremely dangerous. That being said, Alex Honnold is probably doing it as safely as a person could possibly do it. He works out. He eats extremely clean and healthy. He practices. Over and over and over. For me, besides the actual feat itself, this was the mind blowing part. The fact that he rehearsed the climb physically, on paper, and in his mind. He climbed El Capitan with ropes and studied the possible routes. He journaled about it. He discussed it with others. He analyzed it down to its smallest part. And when he found parts that gave him difficulty, he analyzed those parts even more, and practiced them with the diligence of a kung fu master.